For many dedicated gamers, the launch of Overwatch back in 2015 marked a new era in character-based first-person shooters, setting the stage for an exciting sub-genre in the industry. While many other alternatives have since arrived at the scene, Blizzard’s creation continues to captivate its fans, no doubt thanks to its polished gameplay and steady introduction of new heroes, but also to the Overwatch League (OWL), its own Esports league that began its journey in 2018.

Not only did the OWL elevate the fan experience beyond just playing the game itself for the more casual gamers out there, it also provided devoted players of the top caliber — like L.A. Gladiators’ Indy “Space” Halpern — a chance to compete with one another, and to take part in some pretty cool projects along the way. The latest to take place is the unprecedented creation of the League’s own set of team jerseys with famed fashion and graphic designer Jeff Staple, who — as someone that grew up as a video game fan himself — saw this collaboration as a “lifelong dream come true.” 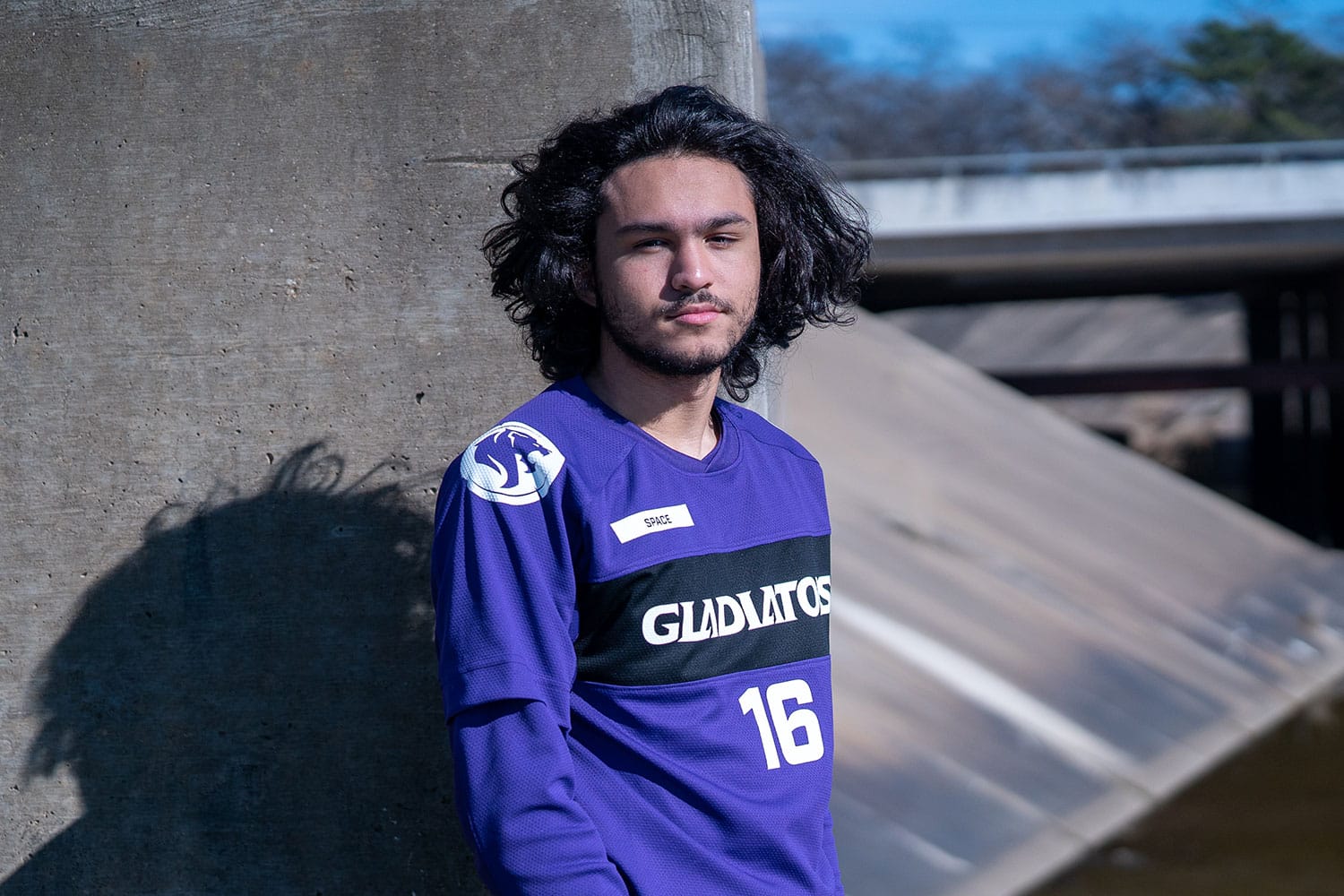 “When the Overwatch League got in touch, they really welcomed me in with open arms and walked me through the phenomenon that was occurring and I was absolutely floored,” Staples continues. “I want people to realize that professional Esports athletes have some very interesting challenges: their bodies are sitting in a heavily air conditioned room for hours at a time. At the same time, there are areas that experience extremely high frequency rapid movements — like the hands, wrists, forearms, neck and head. So balancing all of these elements is one of the things I was most proud of in seeing this project come to life.”

Joining us at HYPEBEAST to celebrate the upcoming 2020 OWL Grand Finals, Space walks us through how he became one of the League’s best players and what life is like as a professional Esports athlete before sitting down with Jeff to talk about some of the challenges they faced for their collaboration on the OWL jerseys and collection, which you’ll have a chance to win over on our giveaway. And be sure to tune-in to watch the OWL Grand Finals from October 8 to 10. 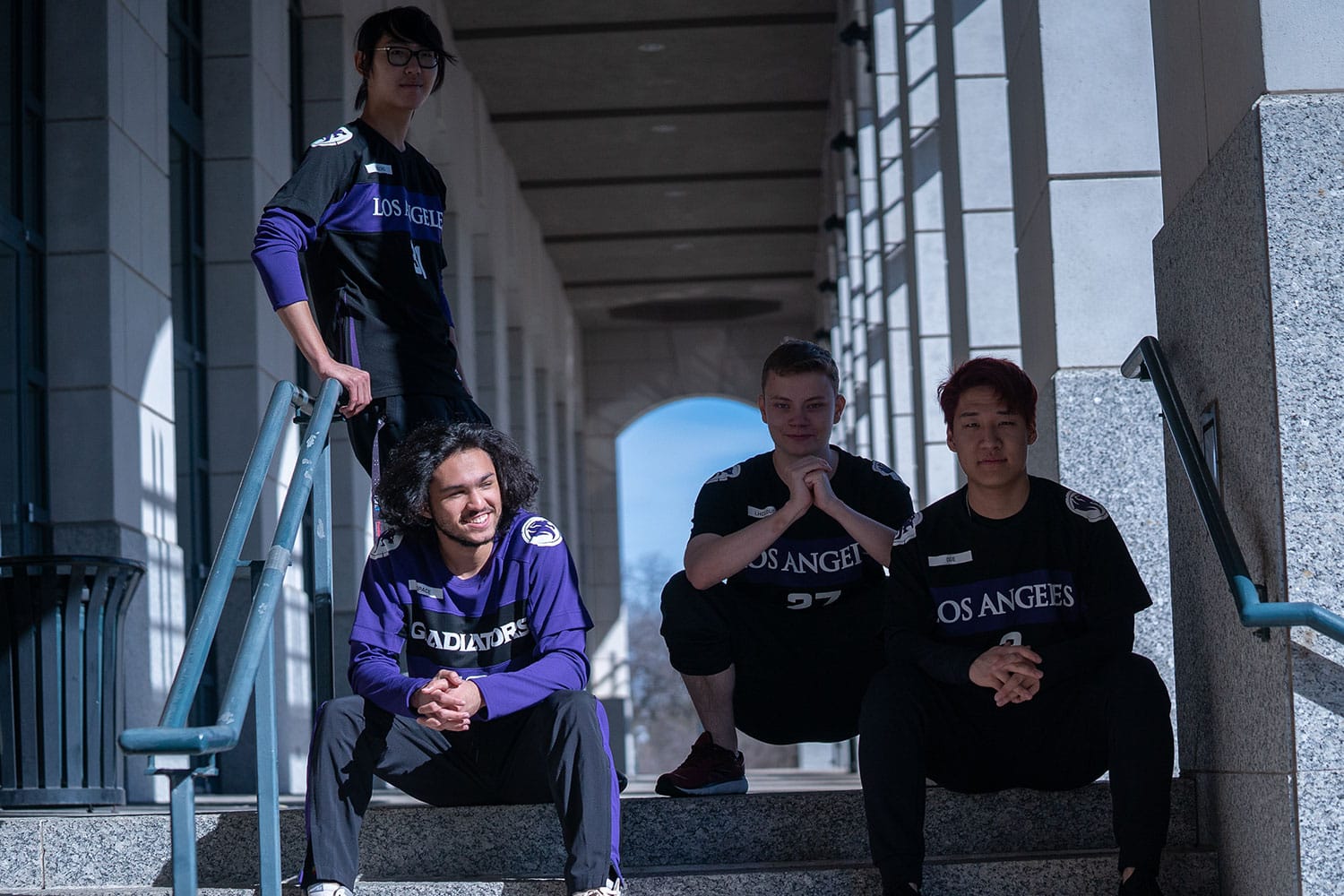 HYPEBEAST: How old were you when you first got into gaming, and what were some of the first games you played?

Space: Honestly I’ve been playing games for my whole life so I never remember what any of my first games were but some of my fondest memories were on the PSP, Wii and XBOX.

Were you always a competitive gamer? When did you realize becoming an Esports player was the path for you?

Space: I first started playing competitively on console for fun with friends in wagers and smaller tournaments, which led to me buying a PC for games and it took off from there.

Professional gaming is no doubt a very intense and high-octane activity, particularly when playing for big teams like the L.A. Gladiators. How do you cope with the pressure, whether it’s from your team or your fans?

Space: The best way for me to cope with the pressure and stress of being an Overwatch League player is spending as much time off the computer as possible when I’m not practicing for the team. Balancing my lifestyle with exercise and rest has been crucial, while spending time with my teammates outside the game helps a lot inside the game.

Have you ever thought about what you’d do after you retire from Esports?

Space: I haven’t thought deeply yet about what I want to do after Esports, and if I want to maybe pursue another job within the industry. One thing I do know is I want to keep doing work on a computer. 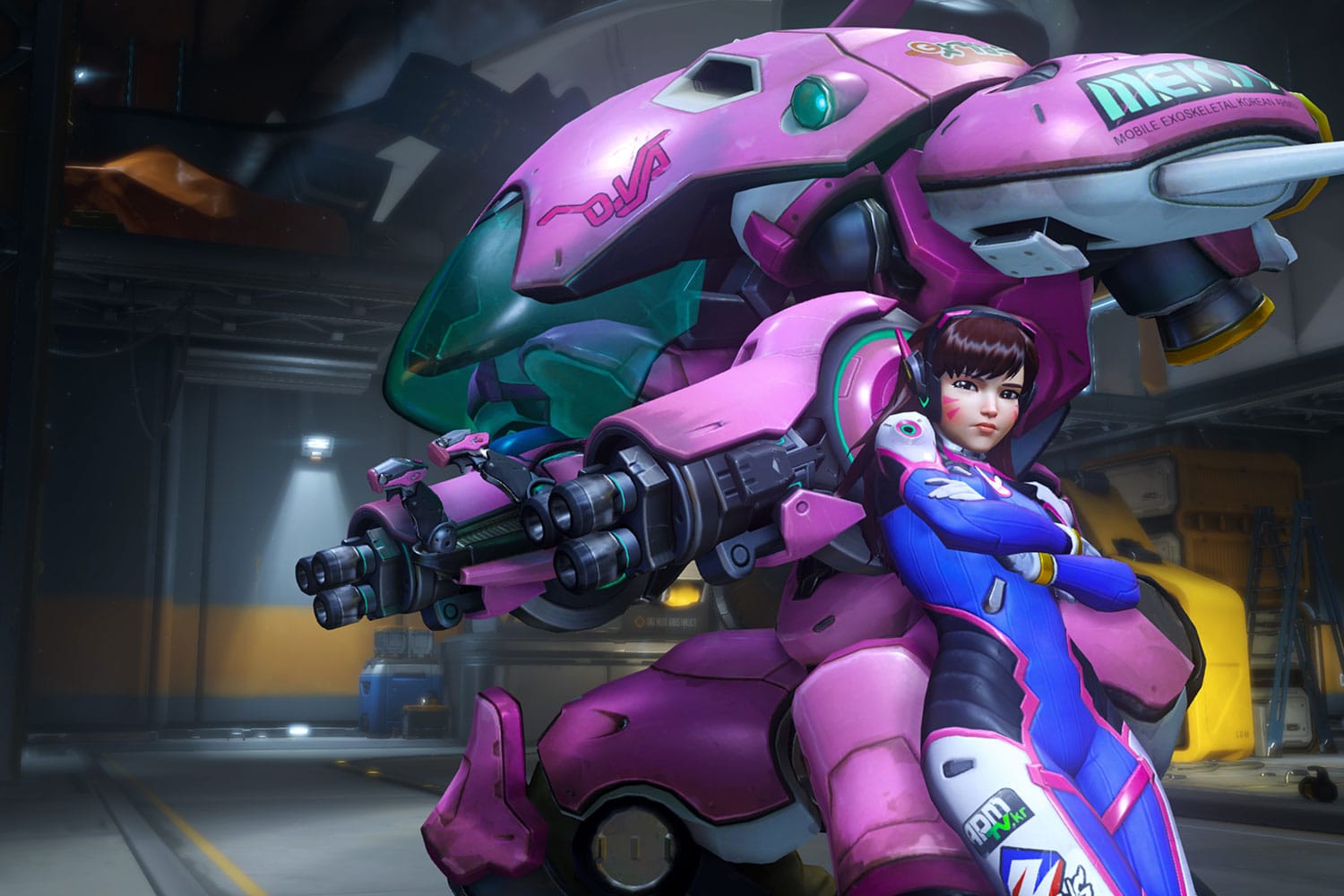 You main as a D.Va off-tank, can you give our readers three tips on how to maximize the hero’s effectiveness?

Space: The three best tips I could give for D.Va players out there is defense matrix efficiency, tracking the enemy team’s ultimates and using your entire 600 hp pool to trade aggression with your team.

You previously said in another tutorial that as an off-tank, communication is key. What are some of the things you need to pay attention to and what information is normally relayed between you and your teammates?

Space: Since playing off-tank is both an offensive and defensive role I’ve always thought communicating to your team will be the biggest difference maker at the highest level. The important things that are relayed are positioning on the map, the other teams ultimates and target focus.

You were recently ranked number one on competitive, how did that feel?

Space: I’ve hit rank one the competitive ladder multiple times, but I’ve never once maintained rank one at the end of the season, because I always like to play on my main account — no matter the rank — to make it more entertaining for my viewers by having much more intense games. My next challenge is actually holding the rank one spot while playing throughout the season! 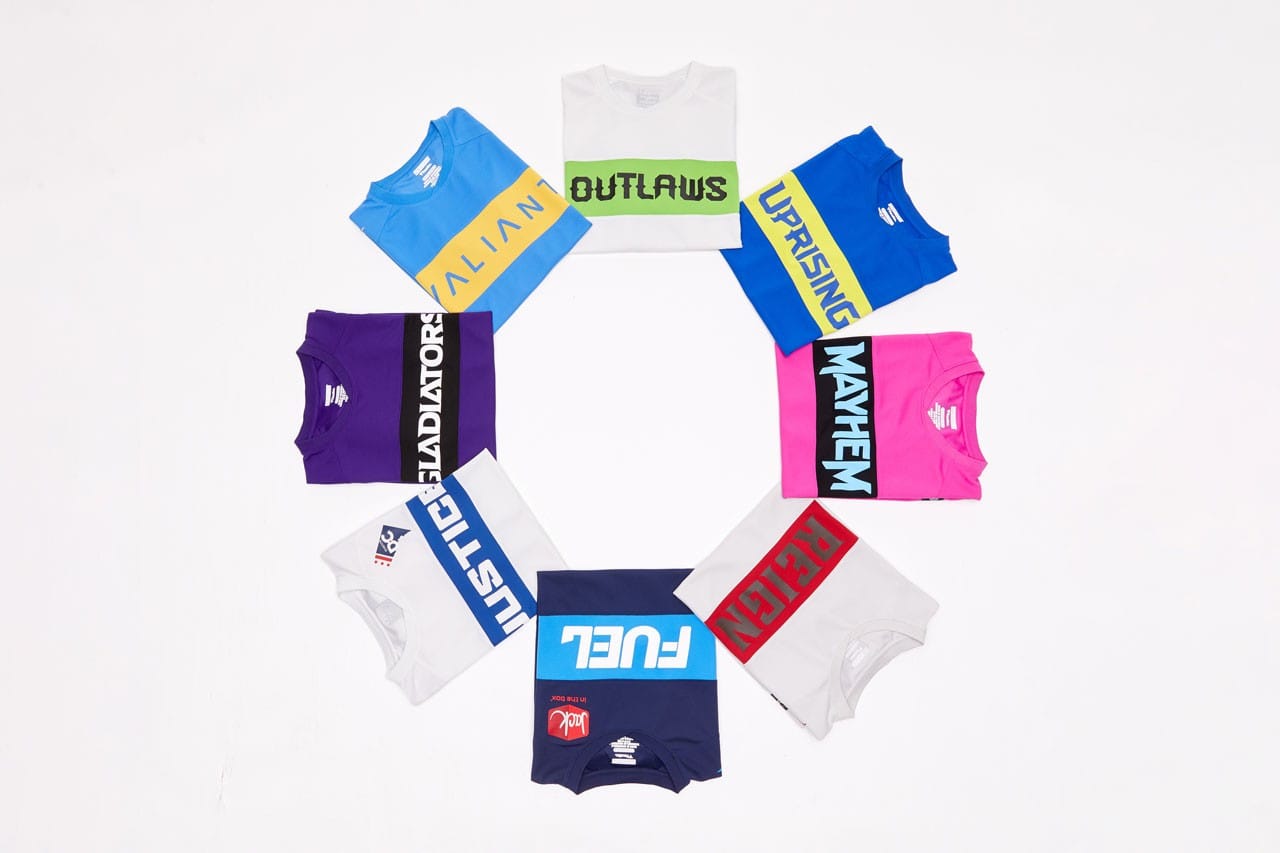 Can you tell us more behind the design process for the new OWL jerseys? How much involvement did the players and teams have, and what was it like working with Jeff Staple?

Space: There was a lot of involvement from different players on every team to help develop the new gear for Overwatch League. It was an honor to work with Jeff Staple and be able to test and wear everything before the actual launch.

Jeff Staple: When it comes to designing fashion pieces, the trend and style comes first. The functionality of streetwear is relatively straightforward for us. A tee is a tee. A hoodie is a hoodie. It doesn’t change much year to year. But when I began designing jerseys, especially for a professional league, the functionality and performance elements come first and foremost.

Two other things come to mind: comfort and flexibility. The styling and fit had to be comfortable. The new kits feature elevated fabrics, premium graphic applications, new side gussets for adjustable comfort, and a fit that is engineered to increase quality and wearability while gaming. No one wants to sit for hours at a time in tight-fitting, constricted clothing. It’s similar to when you’re going to be on a flight. You want to be comfortable, breathable, yet warm where needed.

On the fitting side, Esports athletes are also unique because in other sports, body types are much more consistent and inline. Basketball players vs. football players vs. soccer players tend to have consistent physiques. But Esports players come in all shapes, sizes and genders. So we had to make kits that could accommodate everyone’s needs.

There’s a lot of intersections between streetwear and Esports, looking at guys like 100 Thieves and FaZe Clan and now Jeff Staple. Why do you think these two cultures come together so well?

Space: I think the reason why streetwear and Esports has become so much more intertwined recently is because every day they’re both getting global recognition, whether you play competitively or just for fun or even play mobile games on your phone, you’ll eventually hear about Esports. The great minds of fashion and streetwear are gamers themselves who’re taking a step forward into a new scene.

Jeff Staple: The merging of gaming life and real life is inevitable. Esports fans care about personalized style and functionality, which aligns with the current streetwear trends.

Also, Esports jerseys in the past have not been thought about in meaningful ways that matter to the players themselves. In many cases, they were simply soccer jerseys with different graphics. But for Esports and the Overwatch League, we actually had the opportunity to write that script. That was the most exciting part for me and it reminded me of the early days of street culture where there was no formula yet.

What we did need to keep from the traditional sports world was the idea that there is a team. We had to create a design language that allows for individuality between teams, but consistency when you saw all 20 kits together. The new kits also provide players and teams the opportunity to personalize their look with the option to wear short-sleeved jersey, long-sleeved jersey, jacket, compression sleeve, hat and beanie during competition.
Source: Read Full Article