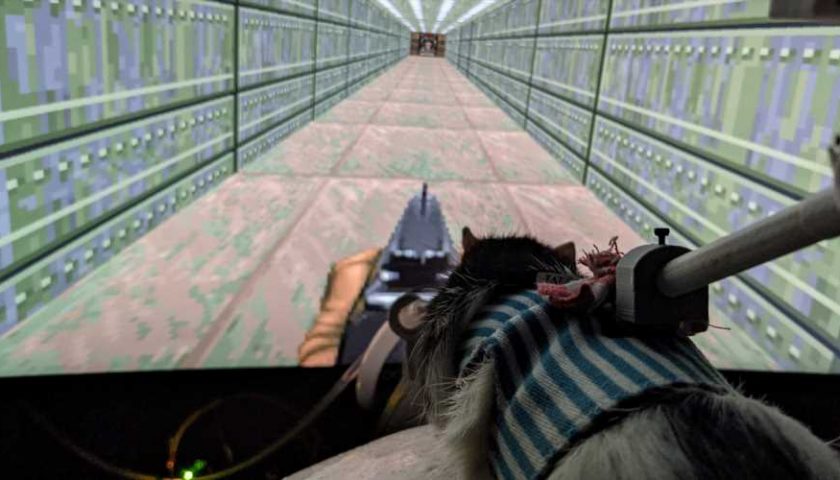 Doom can be played by rats now. In addition to playing Doom on everything from potatoes to pregnancy tests, humanity has seen fit to grant the gift of Doom to our tiny little furry friends courtesy of neuroscientist and gamer, Viktor Tóth.

Last month, we reported how Tóth created a custom setup to allow rats to play Doom 2. It involved giving his pets tiny little sweaters that were connected to an apparatus that suspended them atop a polystyrene ball. Whichever direction the rat ran corresponded with their movement in the game while shooting the gun involved licking a little button that also dispensed food and water.

The rats then played in front of a giant (at least, to the rats) curved screen that would be like gaming in an iMax theater.

All of this was to develop new ways to create virtual environments and tests for rats, but there's no denying how adorable it was to see a rat playing Doom. It was so adorable that Tóth might even turn his experiment into an actual Twitch stream.

In an interview with Futurism, Tóth was asked whether or not he'd considered the streaming platform as a way of cashing in on his rats' sudden fame.

"Yes, I think so. I think it’s a very valid way to monetize a project like this," Tóth replied. "The only problem is how long the rat can run for."

Humans can stream for hours on end because we find games endlessly fascinating, but a rat's attention span isn't quite up to human standards. One of the rats, appropriately named Romero, was able to play Doom for 15 consecutive minutes one time, but that was apparently the exception and not the norm.

"If you could get to that point and rats would actually 'play' for 10 or 20 minutes straight, then yeah. Twitch streaming would be a very valid way to get this in front of people," Tóth added.

Tóth also said he had plans to expand beyond Doom in the next iteration of his rat VR gaming setup. "One of [the games] that I liked was 3D Pac-Man because behaviorally, it makes sense. The rats don’t really like to attack stuff. They run away from things in the wild. That’d be the dynamic with 3D Pac-Man. You’d have to look back to see if there’s a ghost behind you."

He said that once he figures out how to add another screen at their back, he’d let the rats give Pac-Man a try.