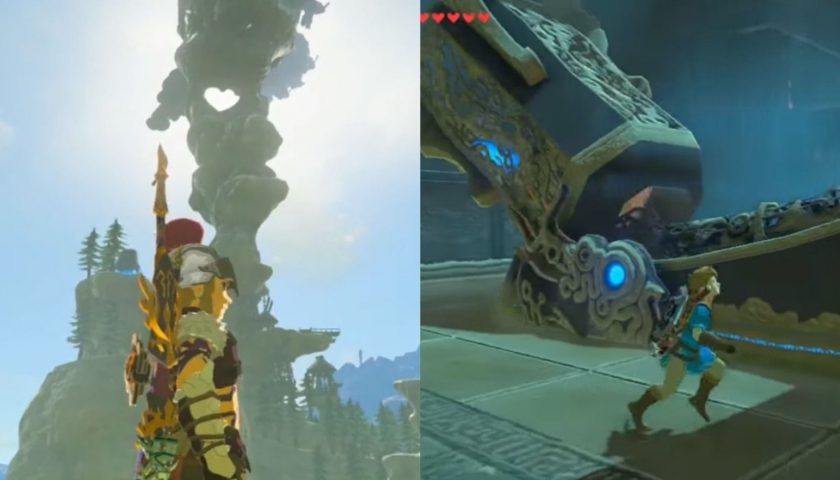 Well over 100 shrines populate the vast regions of Hyrule in The Legend of Zelda: Breath of the Wild, 42 of which are intertwined with a quest in one way or another. These quests range in difficulty, and can often require some trial and error to solve.

This description can certainly fit the bill of The Ancient Rito Shrine Quest. While the actual process to reveal the shrine is pretty brief, it can be tough to figure out exactly how to do so by deciphering the cryptic details. 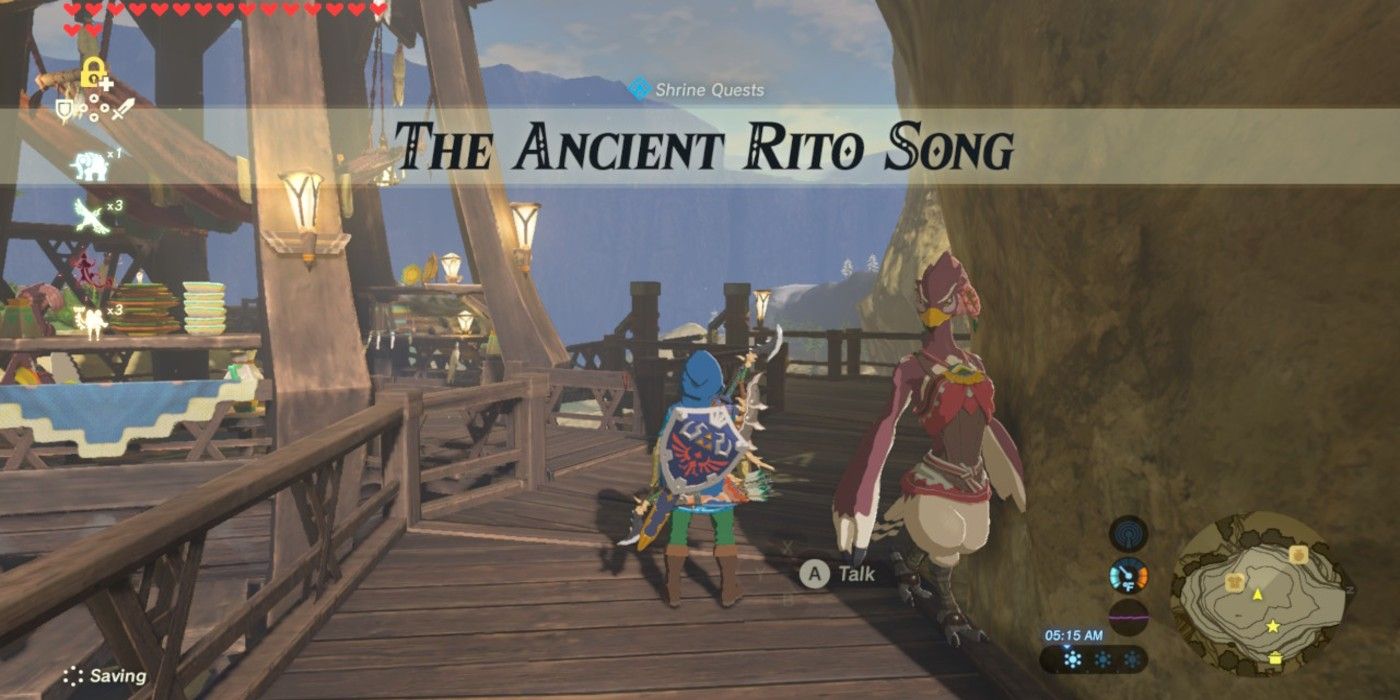 First thing’s first: before you can even initiate this quest and unearth the shrine, the game requires the completion of the Divine Beast Vah Medoh.

Once this is achieved, pay a visit to the purple-laden Rito woman by the name of Bedoli. She can be found at the top of a long spiral staircase in Rito Village. The village rests in the middle of Lake Totori, in the northwest region of Hyrule.

RELATED: Breath Of The Wild: How To Find And Clear The Keo Ruug Shrine

Bedoli will provide the Ancient Rito Song shrine quest, at which point she’ll recite the first half of the ancient Rito song. The lyrics are as follows;

“The pride of the Rito, pillar in the sky, its heart lights up, when the sun is high…”

After this partial rendition, approach her sister Laissa in the nearby hut, who will recall and speak the remaining part of the song. 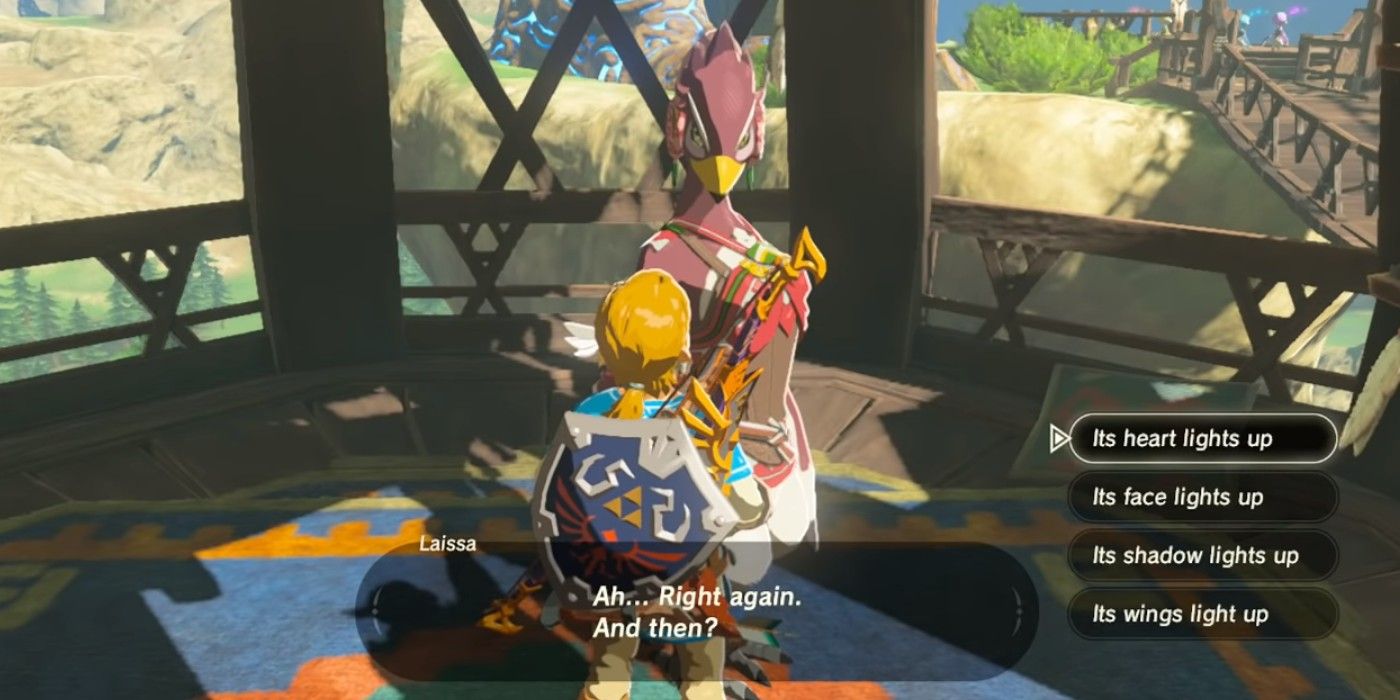 After dissing Bedoli’s spotty memory, she’ll test your own, by requesting you recite the first part of the song by picking from a series of blurbs in multiple-choice form. She’ll then complete the lyric as follows:

“…The heart shines upon a path now whole, But a warming flame can stir its soul.”

After this, wait until the sun is positioned high in the sky, as the song says, and head to the shrine pad south of the Rito Village, just across the surrounding lake. 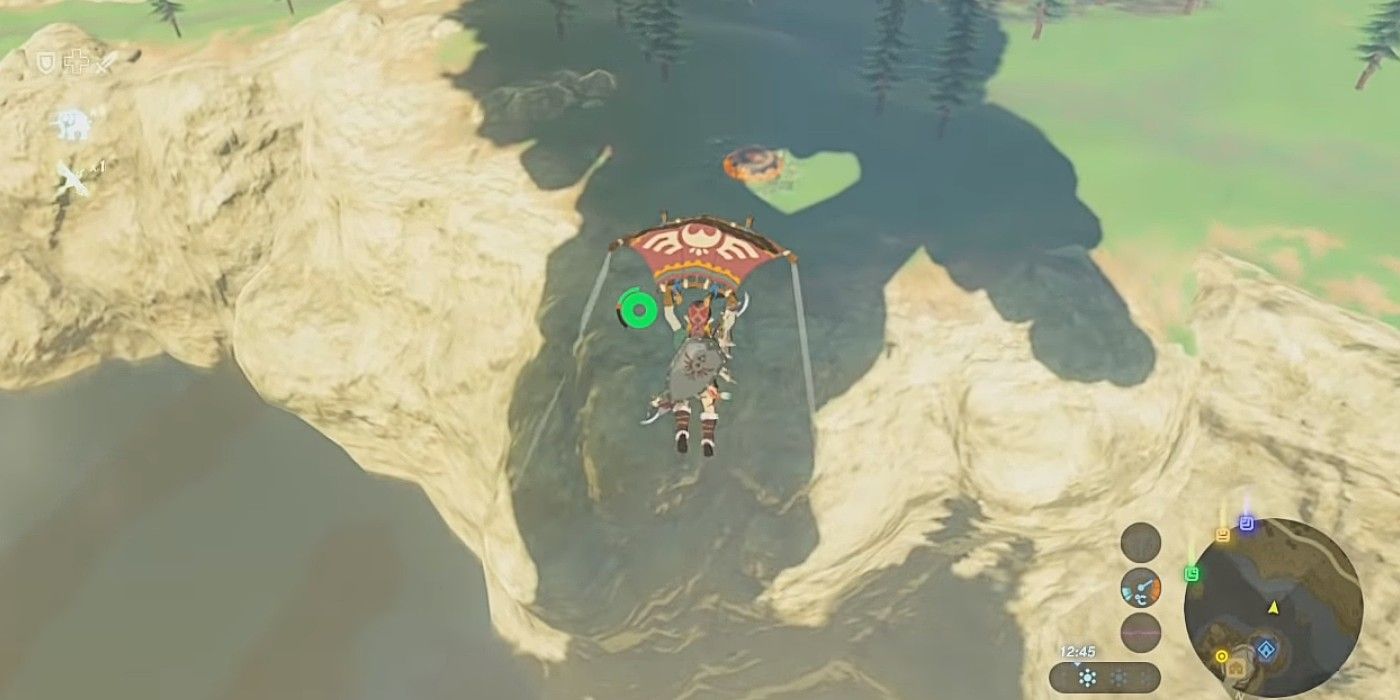 Once there, get a fire going by using flint and wood on top of the platform. You can also simply hold a lit torch on the pad. Be sure to do this just after the sun has reached its highest point in the sky — specifically around 12:30pm. 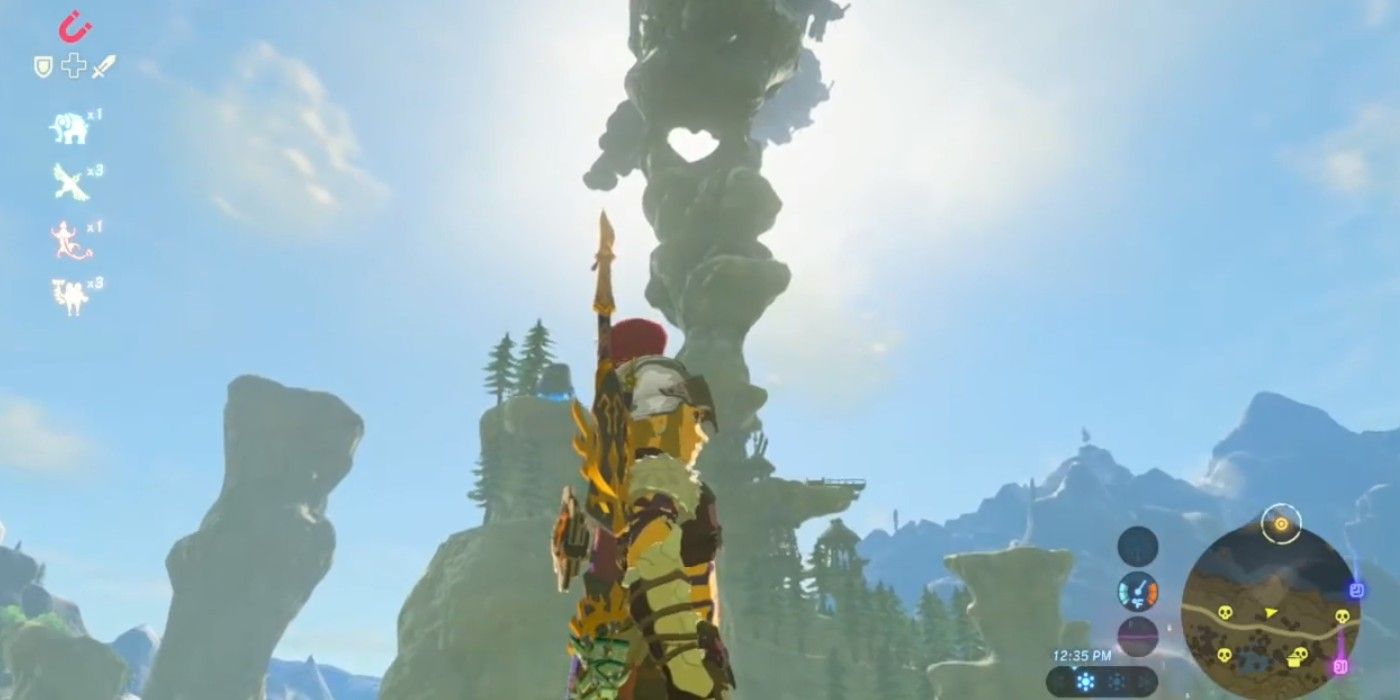 Seek out a heart-shaped hole on the towering boulder Rito Village is built on. Once the sun is aligned with this hole, the submerged Bareeda Naag Shrine will be revealed. 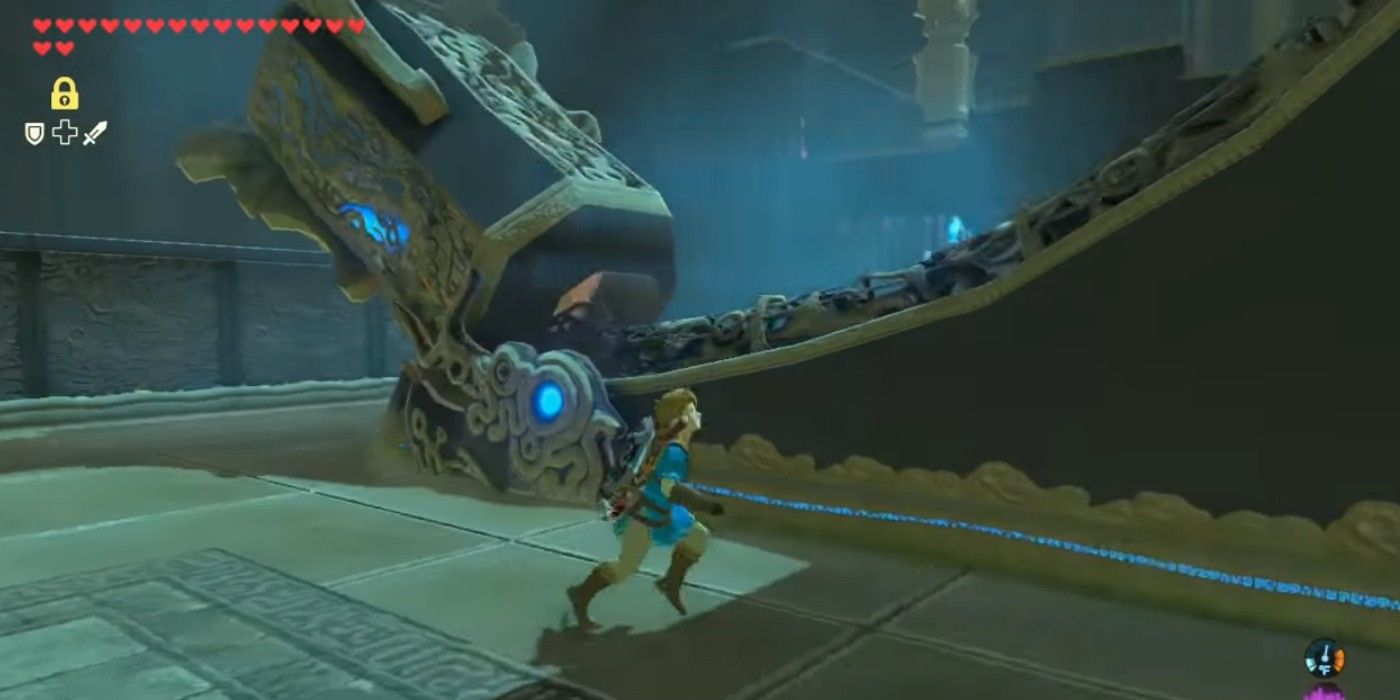 The newly-emerged shrine nearby can now be completed. Head toward it and enter the area. First of all — a chest can be accessed by blasting a nearby breakable wall with a bomb. This will yield a Falcon Bow.

You’ll notice a large cannon-like structure in the center of this area, which can be reached by climbing a ladder. Climb up and feed a round remote bomb into the cannon to activate it. 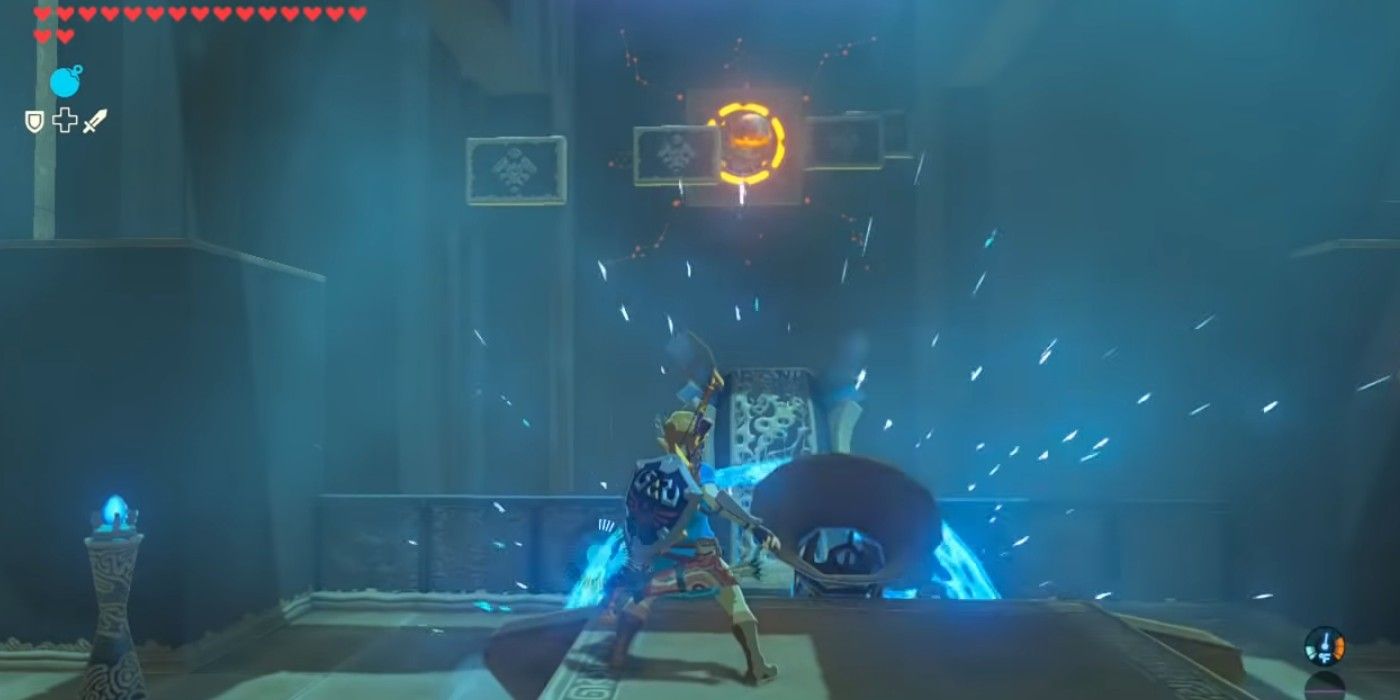 A circular symbol will be illuminated on the wall beyond, complete with a few moving pannels that obstruct it. Drop another bomb inside the cannon, and wait for an optimal clearing to detonate it.

This will open a door to another area — this time an optional puzzle. It can be bypassed in favor of just finishing the shrine, though many will find the reward worth the extra few minutes or so of effort.

Approach the next cannon and time another remote bomb so that it strikes the target again. This one will be a little trickier, as the target that needs to be hit will be moving along with the panels.

The usually-handy Stasis will, unfortunately, negate any target hit while frozen, so you’ll just have to time the blast precisely.

It may take some tries to pull off, but it’s certainly doable after some trial and error. A successful hit will then open the last door, yielding another chest with a valuable diamond.

NEXT: The Legend Of Zelda: Breath of the Wild: 10 Tips To Taking On Waterblight Ganon 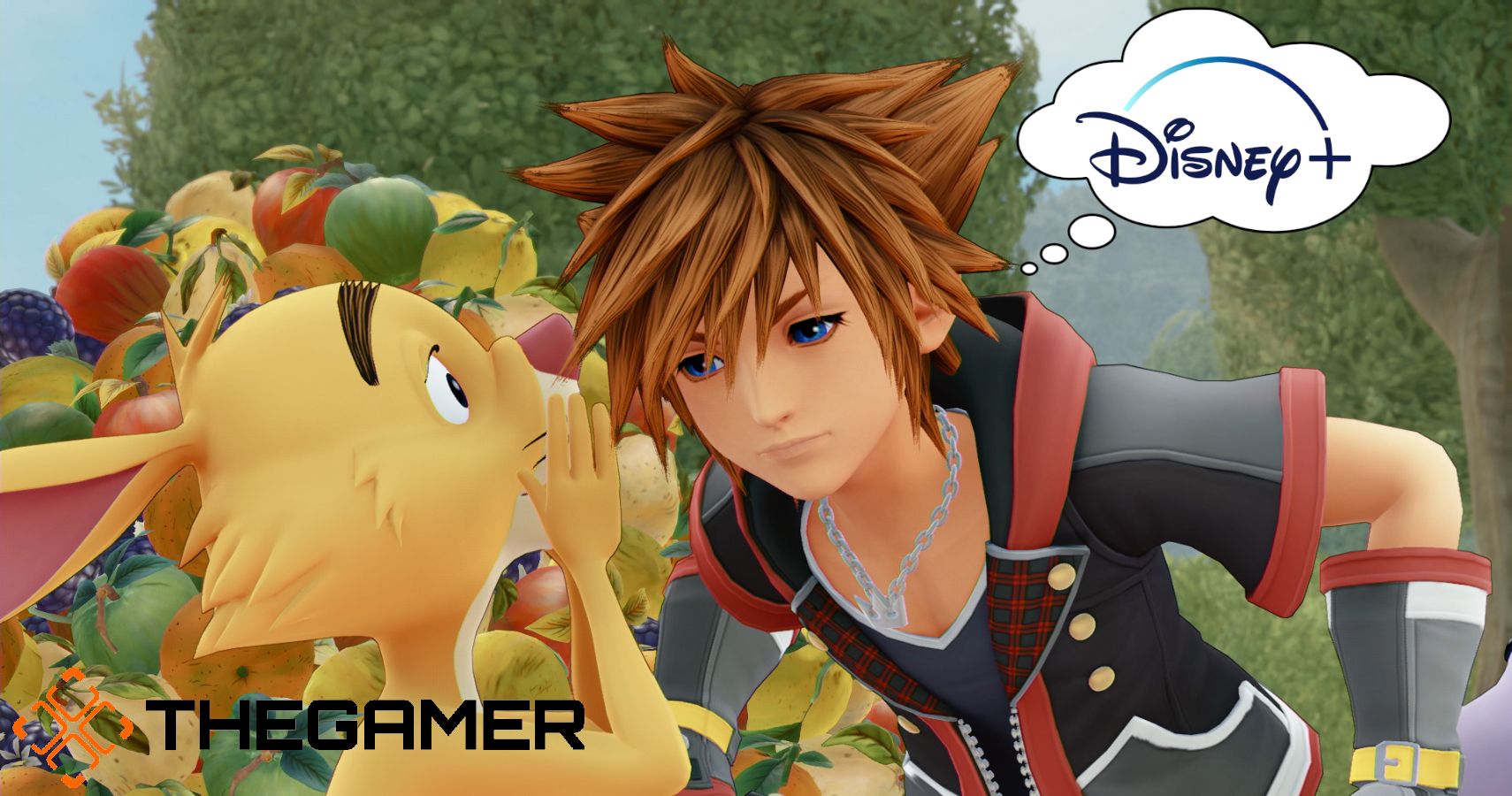 Stephen is an avid Nintendo, Indie, and retro gamer who dabbles in Xbox on occasion, mainly in the form of binge sessions of Overwatch. He’s a history buff, an aspiring writer of short fiction, and a devout metalhead who enjoys poorly drumming along to Black Sabbath on his cheap drum set. When his beloved Chicago Cubs or Bulls are not playing, he typically likes to watch random documentaries or campy horror films.