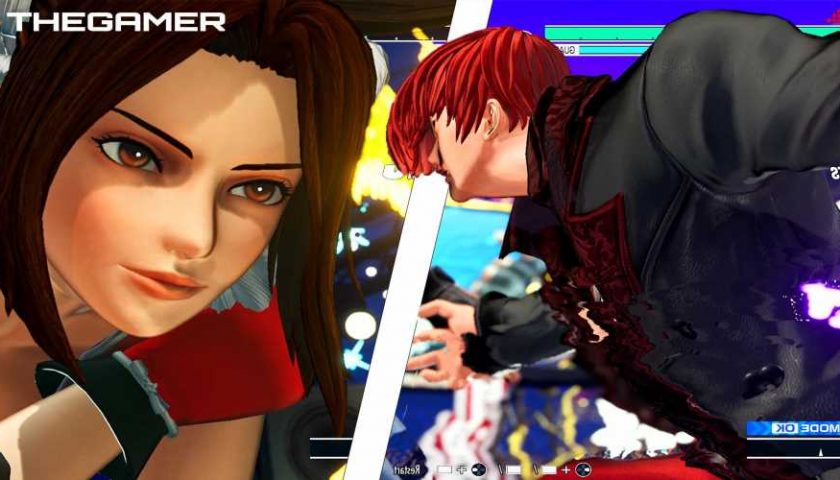 However, as popular as this series is, KOF is also more challenging to learn. After all, this game requires you to learn three fighters at a time instead of one, among other challenges. Luckily, we have some tips to help you navigate the KOF fighting system as well as 15's new features.

Your Best Offense Is A Strong Defense 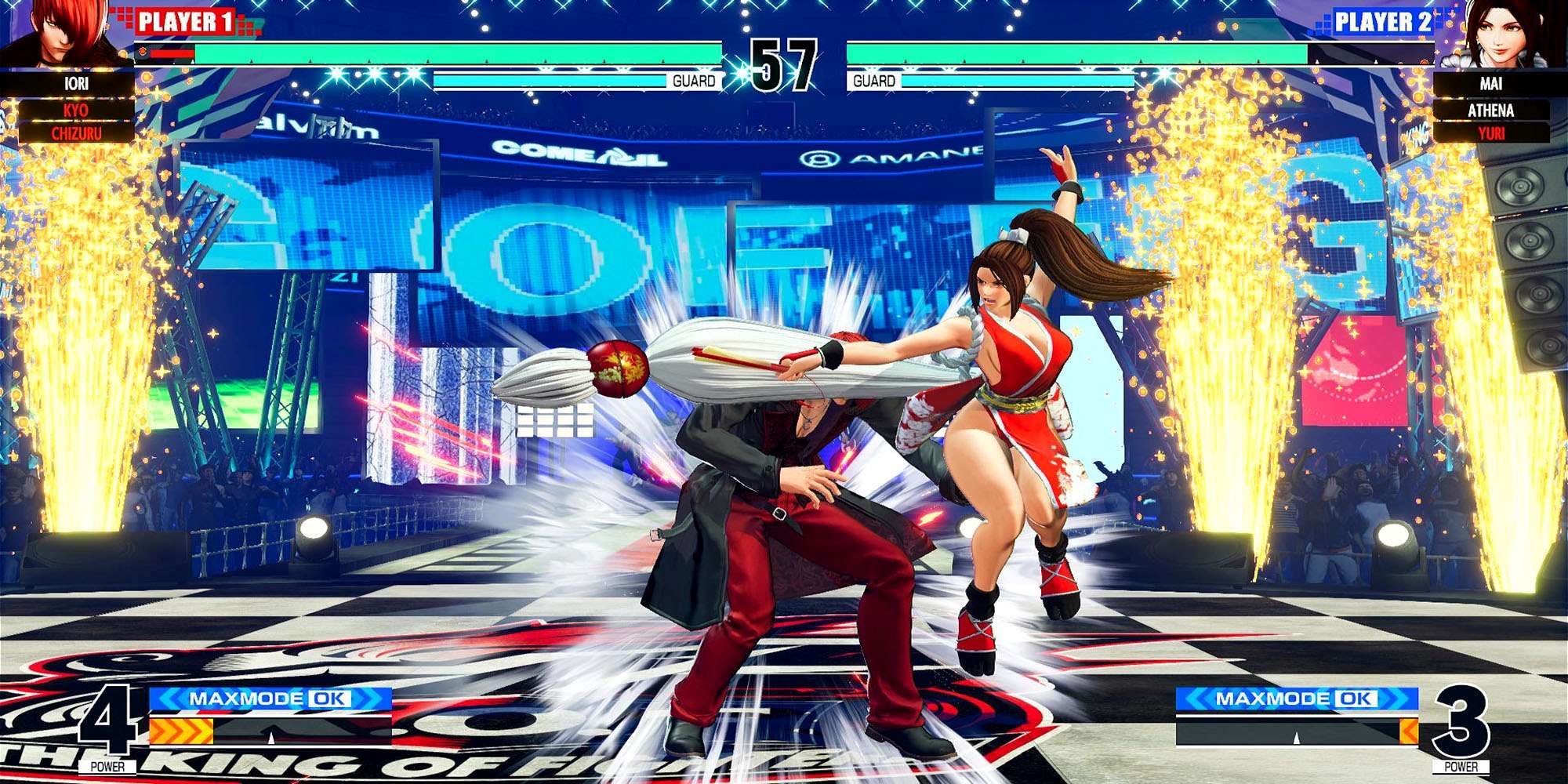 The King Of Fighters 15 stands out from other new releases in the genre, such as Guilty Gear Strive, by making defense tactics a central focus in its fighting system. This focus comes with the Shatter Strike, a counterattack that stuns opponents.

Shatter Strikes require at least one power bar and gets activated with this command: ⬇️↘️➡️+ [Heavy Punch][Heavy Kick]. While you can perform a Shatter Strike at any time, its intended use is to break your character out of a guard stance. In turn, it's a highly effective maneuver under pressure.

Shatter Strikes turn KOF15 into a game of cat and mouse when the reward of landing a solid combo gets measured against the risk of punishment from counters. In turn, you'll see this strategy utilized a lot by the more challenging AIs in single-player modes.

Therefore, if you find yourself hurling combo after combo against an enemy with no success, then it might be time to switch up your approach. Sometimes, the best way to nail a killer combo is to wait for your opponent to attack, counter with a Shatter Strike, and then follow up with a rush for additional damage.

Practice Your Canceling To Rack Up Major Damage 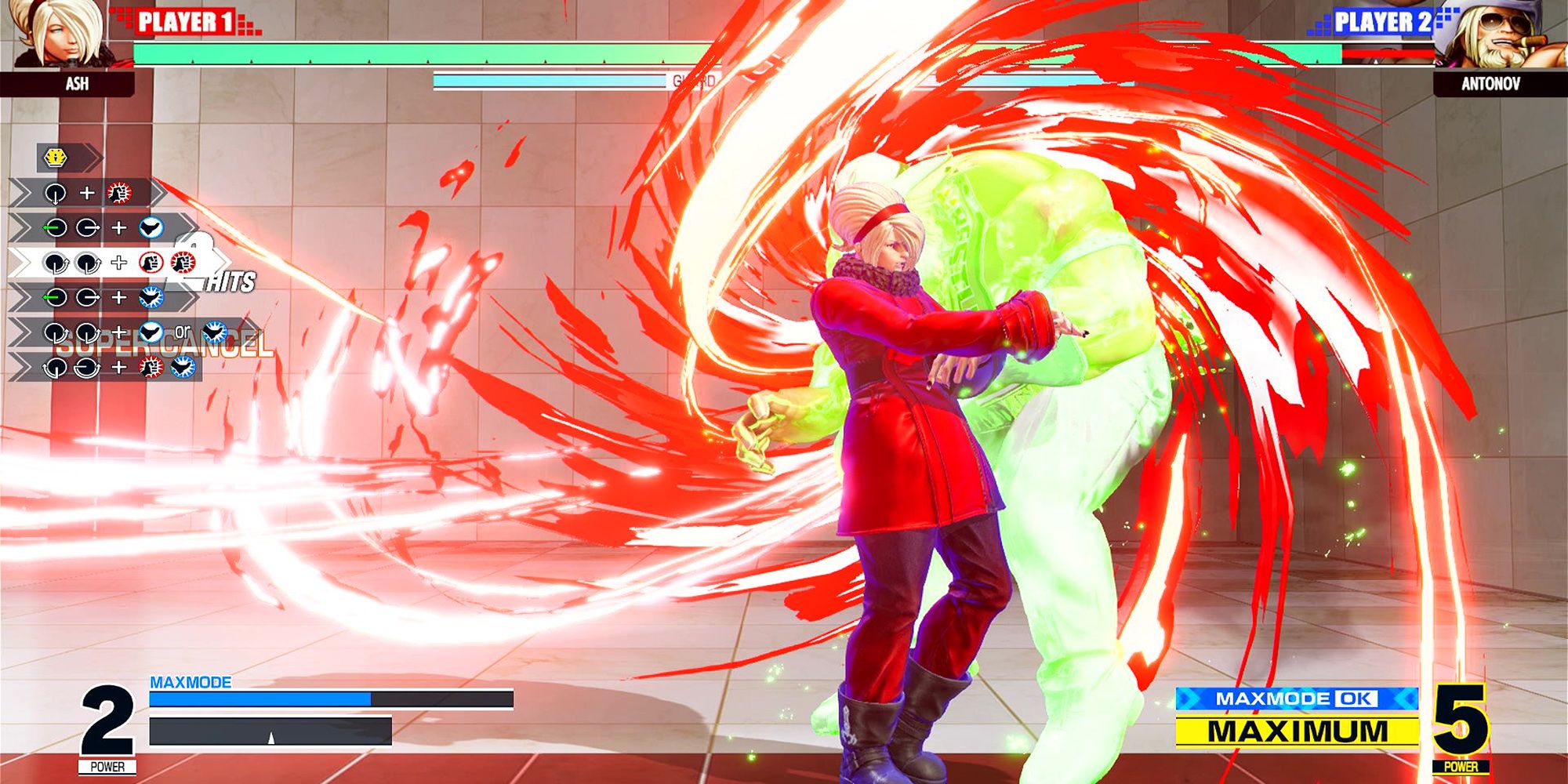 Canceling moves is the bread and butter of KOF15's fighting system. In short, cancels allow you to cut the animation of one attack short by interrupting it with a higher-level move.

There are plenty of benefits to canceling. First, canceling is a great way to work in more powerful moves without your enemy catching on. Furthermore, successfully canceling a chain of moves can create a devastatingly powerful combo!

So, how can you improve your canceling abilities? The short answer is to practice, practice, practice. First, however, we mean that you should study your fighters' attacks inside and out. One of the more common stumbling blocks to learning cancels is missing an input window for your next move because of a brain fart.

The training and mission modes are the best places to learn move canceling combos. Training mode is excellent for developing strategies that suit your play style. Mission mode will teach you combos that are tough to master but highly damaging when successful. 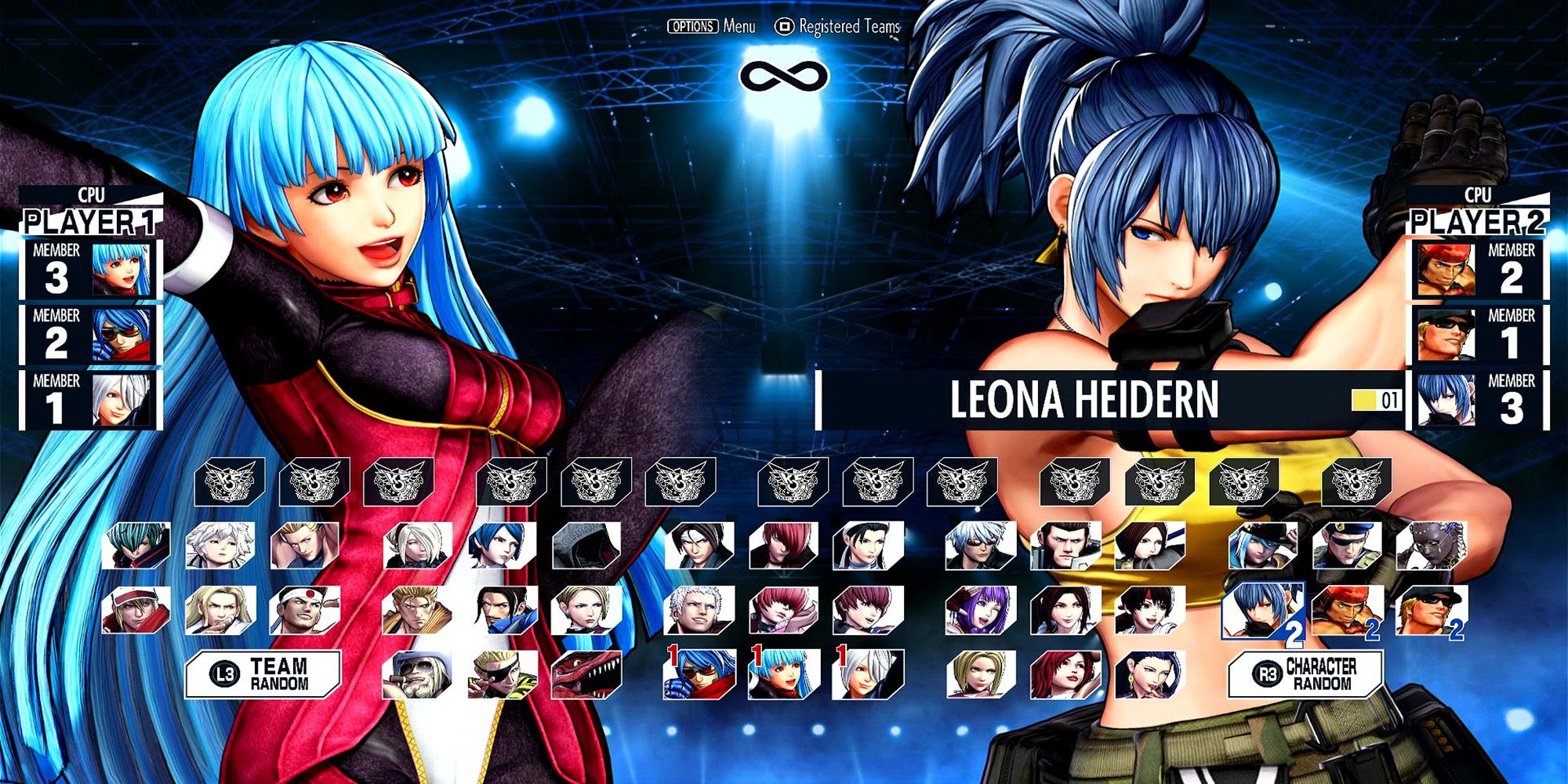 The King Of Fighters is a unique fighting game due to its three-on-three battle system. On the one hand, you'll need to master three fighters before you can compete well. Yet, on the other hand, there's no tag system to bail you out if a member of your team is struggling. Instead, part of your strategy will depend on the orders that you and your opponent choose to roll out fighters.

So, how can you navigate these nuances? Unfortunately, there is no simple answer. However, as you play the game, you'll find that different characters meet different needs. For instance, a character with powerful normal attacks might work as an opener since they are effective without juice in the power gauge.

Also, consider what characters suit you best. For instance, if agility and movement matter a lot to you, you may gravitate more toward a character like Mai. However, if zoning and defensive measures fit better, you'll want to have Delores on your team. So, ask yourself what characters you main in other fighting games and who parallels them in the KOF universe.

Use Quick Max Mode To Extend Your Combos 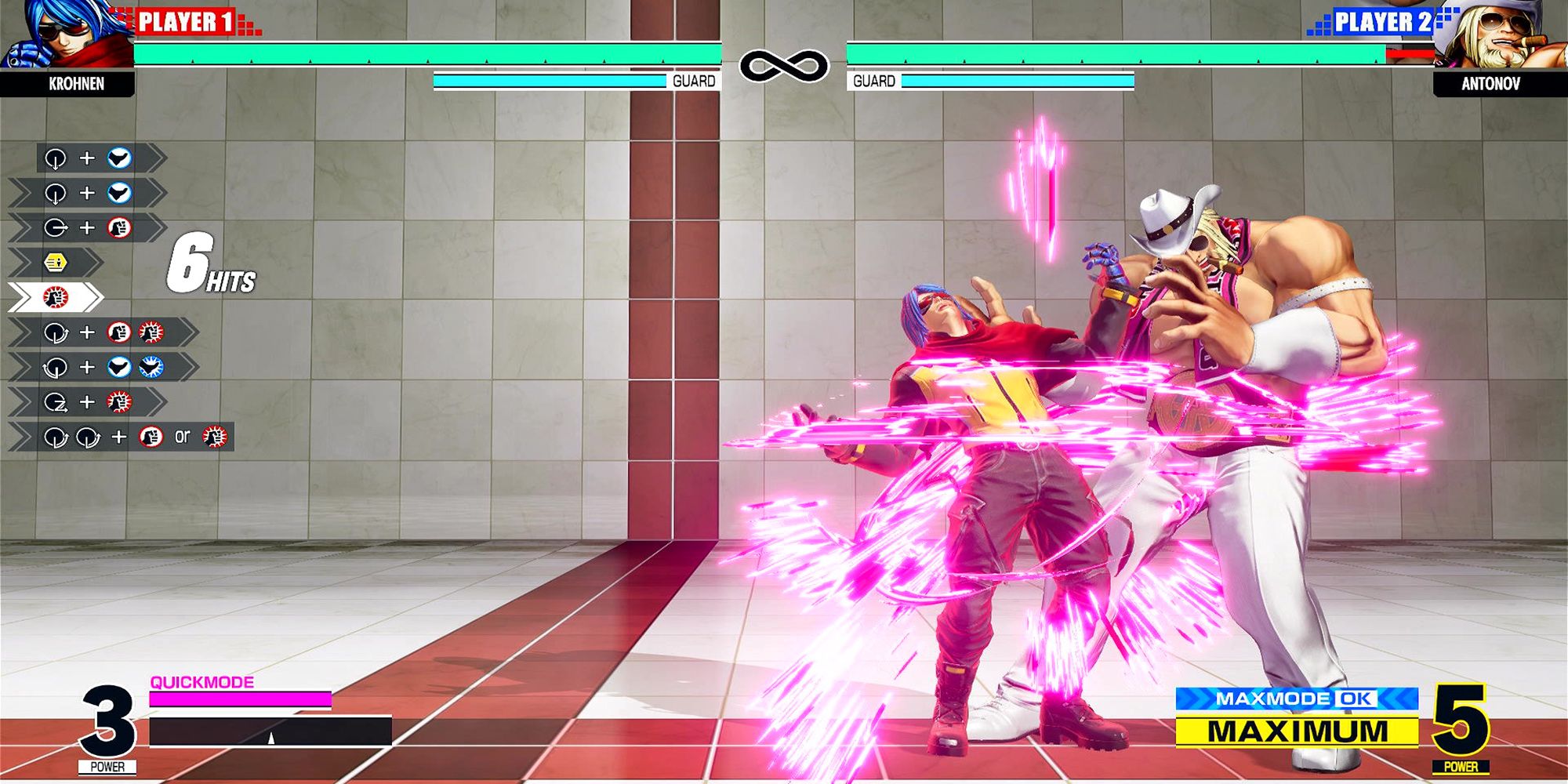 An elegant new feature in KOF15 is the new quick max mode. This short version allows you to cancel a regular attack or command move into the max mode. Quick max mode still lets you perform power gauge skills at a lower cost. However, this short version does not offer the same attack and guard crush boosts as the regular max mode.

In short, you're exchanging attack power for more flexibility.

If you're a beginner, you can start small by canceling into quick max mode, and starting a rush combo, like so:

Then, as you become more familiar with canceling, you can try out a combo like this:

Once you figure out what regular and command attacks chain together, you can further expand the top half of the combo before activating quick max mode.

Finally, check out mission mode to learn what combos your character can do that utilize quick max mode.

Mix In Your Rush Combos To Avoid Getting Blocked Out 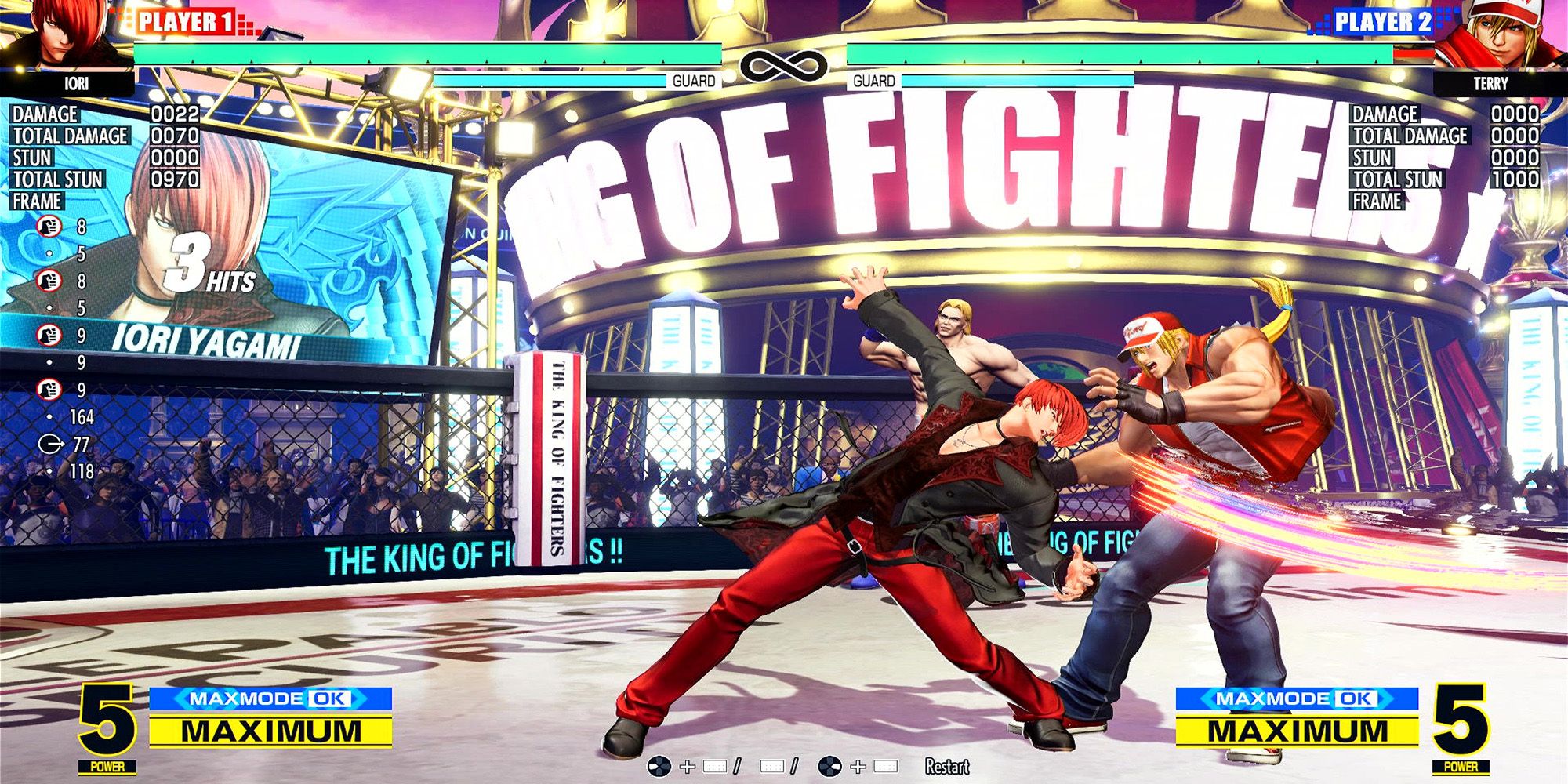 The rush combo mechanism has arguably improved since its introduction in KOF14. While KOF14's rush system automatically branched into super special moves, KOF15 allows players to choose how their rush combo ends based on the last button pressed.

Due to this new malleability, rush combos feel more akin to other auto-combo systems, such as Blazblue Cross Tag Battle's, for instance, and less like a beginner-oriented mechanic. In turn, this improvement makes rush combos a lot of fun to use!

Unfortunately, rush combos are straightforward to read, especially by more experienced opponents and stronger AIs. Therefore, you'll have to find ways to sneak in these quick combos without getting found out.

So, how can you effectively mix in your rush combos? To start, you need to figure out a safer way to hit confirm. After all, if you try to hit confirm with a rush combo, your opponent will likely block right away. Furthermore, if your last rush combo attack is unsafe on block, you'll be open to punishment.

There are three ways to go about hit confirming in this case. First, you can opt for a light kick attack since they provide a quick start-up and are safer when blocked. Your other two options, albeit riskier, are confirming with a heavy attack or command move.

While hit-confirming with slower attacks can leave you vulnerable, they are easier to cancel into quick max mode (more so with heavy attacks than command moves). Then, you can follow up with a rush attack into a super special move.

Lastly, it's imperative to mix up your high, medium, and low attacks, like in any fighting game. Doing so will throw off your opponent, which will make it easier for you to drop in that mighty rush combo.