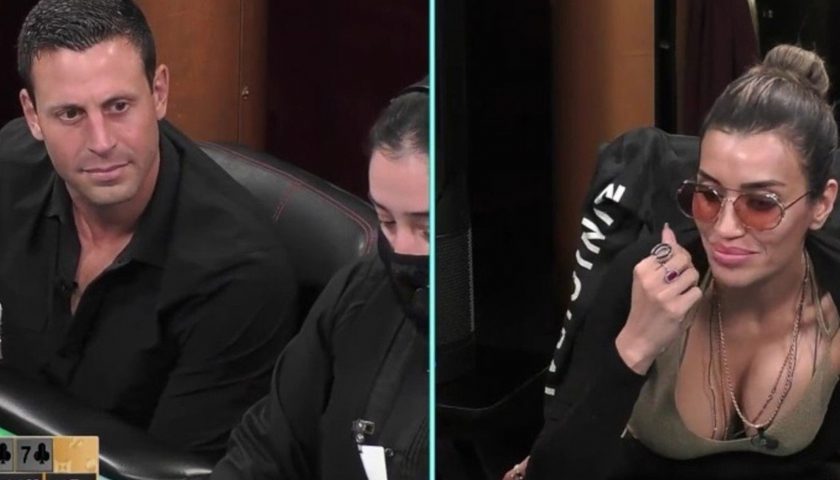 It is staggeringly obvious that Robbi Jade Lew did not cheat against poker pro Garrett Adelstein in last week’s Hustler Casino Live poker game. She’s an amateur player who made a statistically bad call and won. Case closed, end of story. What more is there to talk about? The fact that so many are entertaining the notion that Lew cheated through some kind of high-tech means is baffling to me when the reality of the situation is so clear. The story should be about the seasoned veteran who missed his draw and pitched a fit about it, but instead, Lew is being tried in the court of public opinion by people with the worst opinions I’ve ever seen. The way this is being handled by the community and Hustler Casino Live sets a bad precedent for live poker, and I’m embarrassed at the spectacle this relatively innocuous situation has turned into.

Here are the facts: newcomer Robbi Jade Lew makes her first appearance on the Hustler Casino Live stream, a high-stakes cash game played five nights a week on the HCL YouTube channel. Lew is playing her J/4 hand against Garrett “Gman” Adelstein, a player of some repute who frequents this particular game. Adelstein raises the pot over $2k pre-flop with 8/7 of clubs and Lew surprisingly calls. If you’re not into poker, the important thing to understand is that her hand is considered to be quite bad.

It doesn’t improve at all on the flop, which shows 10/10/9 with two Clubs. Adelstein doesn’t have a winning hand yet, but he has a considerable number of outs. At this point he’s statistically likely to win, and he bets $2,500 to represent that. With nothing but Jack High and a backdoor flush draw, Lew makes another surprising call.

The turn is the 3 of Hearts, which doesn’t improve either player’s hand. Adelstein makes a semi-bluff bet with the intention of getting Lew to fold. He adds $10k to the pot which Lew, bewilderingly, raises to $20k. Without much hesitation, Adelstein pushes all-in. Lew lays down a time chip to give her an extra 30 seconds to think, but quickly calls the all-in. The players agree to run it twice and the river comes 9 of Diamonds and Ace of Spades. Adelstein doesn’t find any of his outs and Lew wins the $269K pot with Jack High.

This is a bizarre hand, there’s no doubt about it, but not as bizarre as the reaction to it. Adelstein is in shock at first, but after a moment he starts interrogating Lew about why she called with such a weak hand. He’s unsatisfied with her answers and things continue to escalate. The two leave the table and have an off-camera exchange which results in Lew giving Adelstein his money back. Later he claims Lew offered him the money back after he told her the hand was about to go viral and millions would see her suspicious play. In a written statement on Twitter, Adelstein outlines mathematically why the call was bad, how cheating at a live game can happen, and all the ways, in his mind, Lew acted suspiciously. He says he accepted his money back because “this was the closest I would get to a confession.”

HCL put out its own statement promising to hire a law firm to conduct an independent investigation and release the findings publicly. The statement concludes with an admission that this investigation was initiated based on nothing but Adelstein’s feelings. “It’s important to us to reinforce that we have found no evidence of wrongdoing by anyone at this point.” The unfounded accusation was enough to have Lew investigated and potentially put under polygraph, all for having the audacity to play a bad hand.

Many are seeing parallels to the chess cheating scandal between pro Magnus Carlsen and relative unknown Hans Niemann. Niemann has admitted to cheating twice previously, so Carlsen had some legitimate reason to suspect him. Adelstein has no evidence against Lew however. He can say returning the money is an admission of guilt, but he believed she was cheating before that, simply because she didn’t play by the book and didn’t have a good enough reason why.

If there are parallels here, they’re to the Amber Heard trial. YouTubers like Doug Polk have been drama farming the incident for nearly a week, doing “investigation” streamers where he looks into Lews private life to find evidence that she’s untrustworthy. It’s disappointing, but not surprising to see how Lew is being treated by the male-dominated Poker community. Every few hours someone posts a video called ‘New Evidence In Poker Cheating Scandal’ and it’s just a picture from Lew’s Instagram of her wearing a bikini. This isn’t so much a Cheating Scandal as it is an Attractive Woman Winning Scandal, and some people aren’t going to let this go until she’s been completely bullied out of the scene.

Most of the real pros see this for what it is. Phil Ivey, who was sitting two seats away from Lew, thinks she misread her hand a thought she had J/3, not J/4. This seems like the most obvious explanation. She didn’t want to admit she misread her hand in front of the whole world, so she rambled a bit nonsensically after the hand ended. That’s all there is to it.

In all of this dust-up about Lew calling with a bad hand, we ignore that Adelstein pushed with 8 High and was only favored to win by a few percentage points. If Lew believed she had a 3 and called Adelstein with the bottom pair – what pros call a bluff catcher – Adelstein would have congratulated her and moved on. But she didn’t play the way pros play; she didn’t gamble ‘correctly’. Now she has to face scrutiny from every direction, including an investigation by Hustler’s lawyers, for no legitimate reason.