From corroding the oversized armor of the arrogant Crimson Lance to shorting out deranged mechs Borderlands has always excelled at giving our bloodthirsty id something to wallow in. Now the new game is upon us, and, if you’re like me, you’re probably curious what tools of destruction 2K has given us. So, to quell our mutual curiosity I am embarking on a journey. A journey to uncover the best, most brutal weapons in the Borderlands. I’ll be updating regularly as I uncover more but without further hesitation here are the best guns I’ve found so far. As Claptrap commands, “Let’s reek righteous vengeance!” 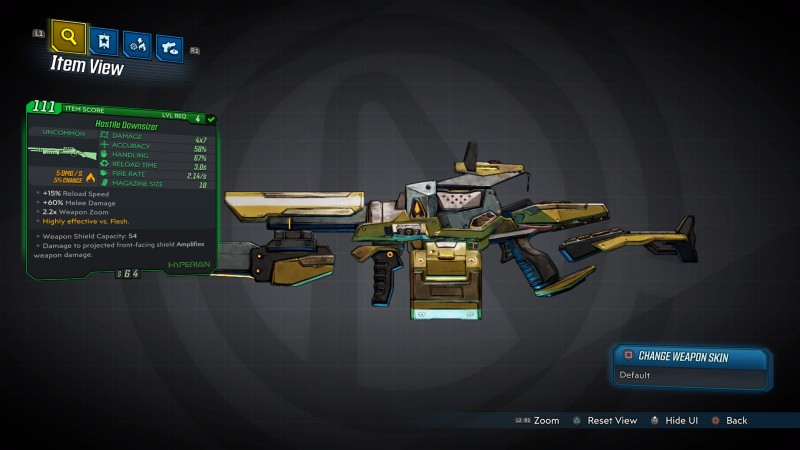 After an hour of common trash, the magic happens. I kill a bad-ass skag and find my first love: the Hyperion Hostile Downsizer. This bucktastic bulldozer comes fully augmented with a bayonet, frontal shield, and most importantly, incendiary rounds. Sure, incendiary rounds are everywhere, but what makes this special is how it augments Moze: the gunner class. It’s possible to increase her incendiary potential both passively and after reloading – delighting my inner pyromaniac. The occasional spark evolves to constant immolation – downsizing every enemy to ash. 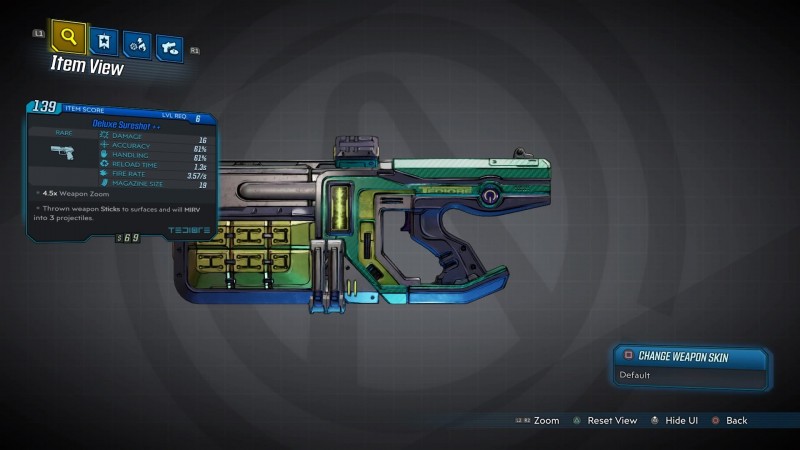 Now, this gun was a surprise. I never gave pistols much consideration in the prior Borderlands but now that changes. The little wonder packs in the quickness of an SMG with the accuracy of a revolver – allowing for near-constant critical hits. The pistol’s pugnacious precision would be enough to land it on this list but leave it to Gearbox to throw in an extra burst of love. Not content being another Tediore combustible, this gun not only explodes upon reloading but also splits into three homing missiles. Let the body parts rain! 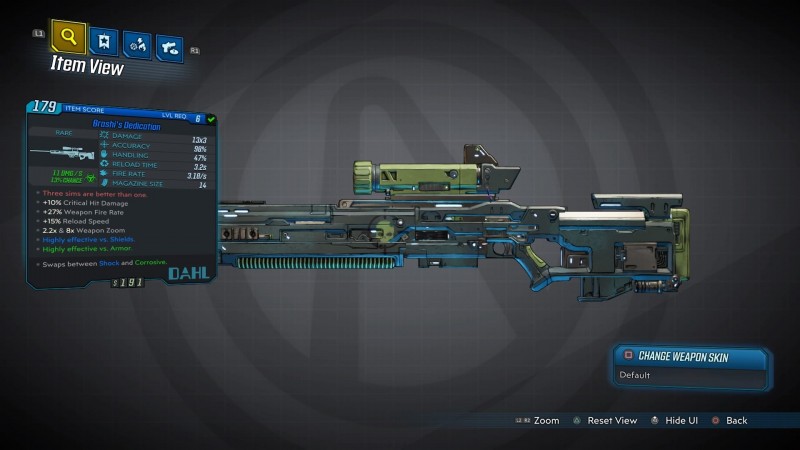 After finishing the main mission, Cult Following, in the Holy Broadcast Center, I have found another treat. Finishing the side quest Head Case (activated by grabbing the head in the jar found when leaving the center) unlocks one of the game’s best early guns: Brashi’s Dedication. A gun enthusiast’s dream it combines four different shooting styles into two modes. The first is an electric mid-range rifle (think the M14 in Call of Duty) while the second is a corrosive long-range sniper. The versatility of being able to fluidly alter tactics without changing weapons is already delicious, but the varying elemental effects make this a tactical must. I will not be dropping it anytime soon. 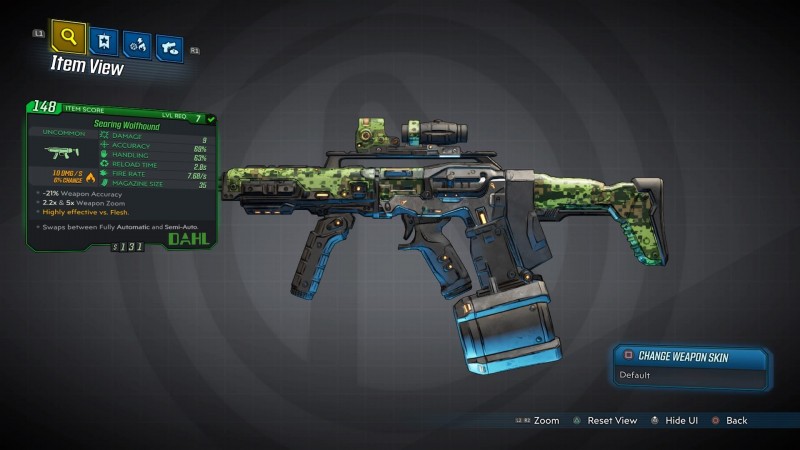 My favorite gun, thus far, graced me during my final mission on Pandora. Both a rifle and SMG this incinerator decimates. Whether it’s scoping a headshot with the semi-automatic mode or eviscerating a badass up close with fully automatic abandon, all who stand against me face hellfire. Leaving Pandora, a fully armed soldier, I’m content. Borderlands 3 has already come through by giving me multiple ways to slaughter, and I’m excited to see what creative weaponry the future holds. 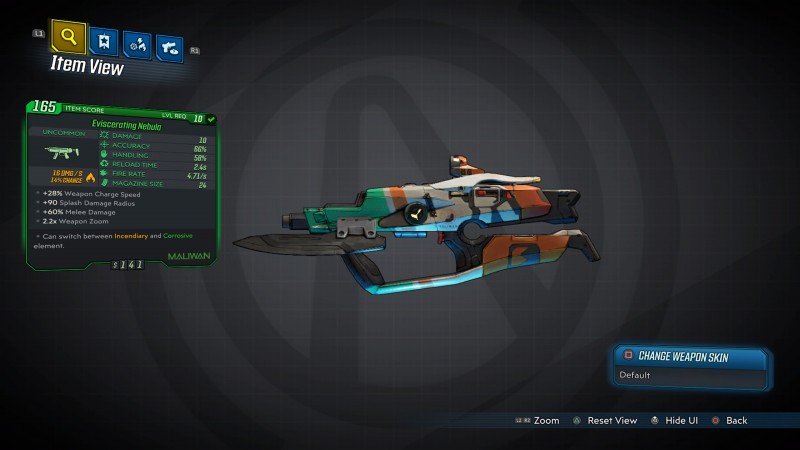 After being on Promethea a grand total of 15 minutes, I have already found a replacement for my beloved searing wolfhound. I feel a sense of loss in parting ways with my recent love, but the sadness is brief since I am whisked away by fiery passion. Maliwan’s eviscerating nebula lacks the wolfhound’s sniping ability, but makes up for it with elemental ferocity. The nebula does six more fire damage, has corrosive damage, and doubles the chance for an elemental effect as compared to the wolfhound! I’m a walking incinerator. 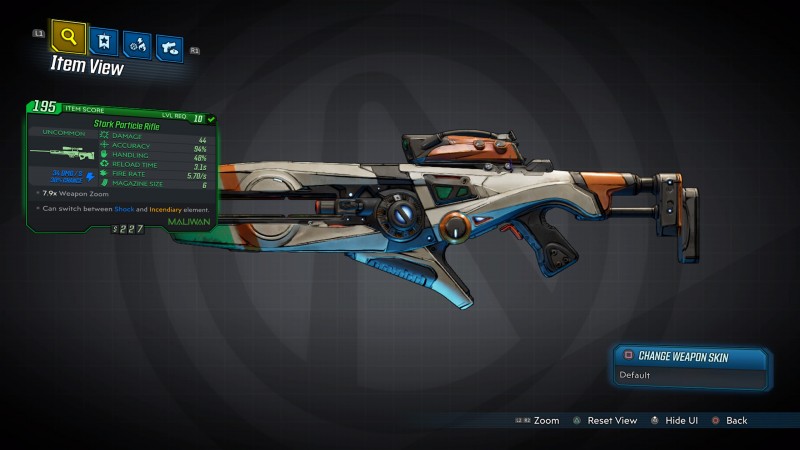 Now I’m starting to wonder … is Maliwan just overpowered? About 30 min after finding the nebula, I find a Maliwan sniper that humiliates Brashi’s Dedication. This monstrosity does 34 elemental damage (incendiary and shock) and boasts a 30 percent chance for elemental activation. That’s triple the elemental power of Brashi’s Dedication. The gun nearly one-shots shielded enemies, so it holds a special place in my heart, but something tells me I’ll be finding something sexier soon. 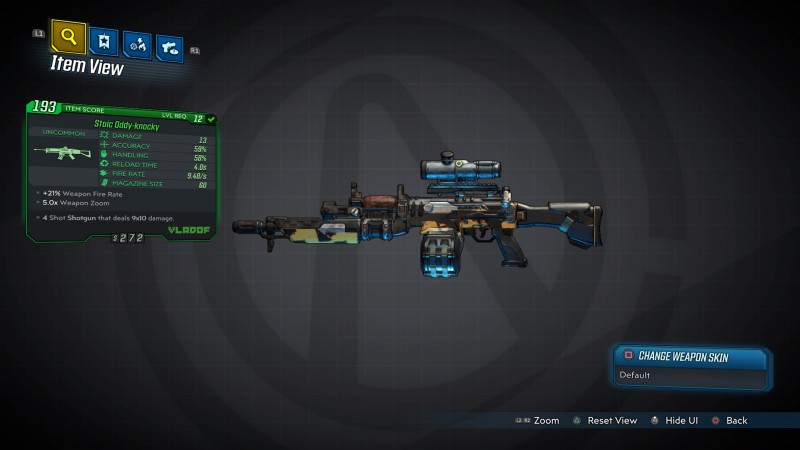 Ooooh, what a beauty. Despite the baffling name and lack of elemental damage, this gun is as awesome to use as it is to look at. It combines the range, impact, and aesthetic of an AK-47 with the magazine size and fire-rate of a heavy machine gun. No matter the range, this gun has me covered. The under-barrel shotgun is just icing on the cake, knocking down any enemies spry enough to get close. The Stoic Oddy-Knocky shreds supine enemies to pieces. Yeah, it’s my new main. 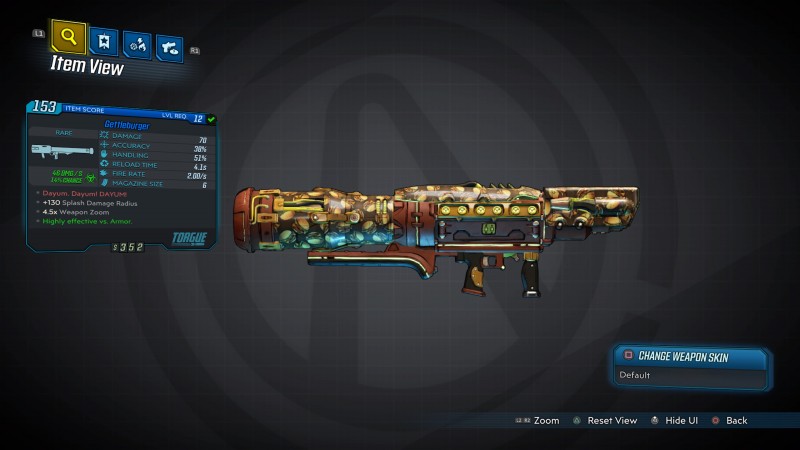 Now, this is a weird one. Awarded after completing the Dynasty Diner side quest, this burger bazooka barfs out rotten roach meat – drenching enemies in rancid rain. Like a fizzling fart, armored enemies evaporate into nothingness. 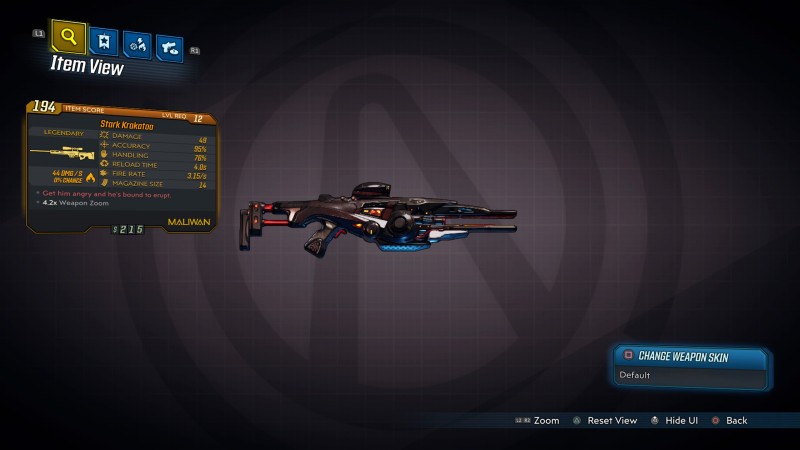 Living up to its volcanic namesake, the Stark Krakatoa erupts with charm. Enemies killed by this sniper rifle spew forth fireballs. The flames scorch enemies, but their tiny range make them only an occasional joy. Even removing the flames, the gun lives up to its legendary status with a near assault-rifle firing rate: Hold down the trigger and watch it unleash hell. The gun annihilates from afar on every occasion, and when the time is right, it incinerates even the most rabid rabble into a lump of dust. 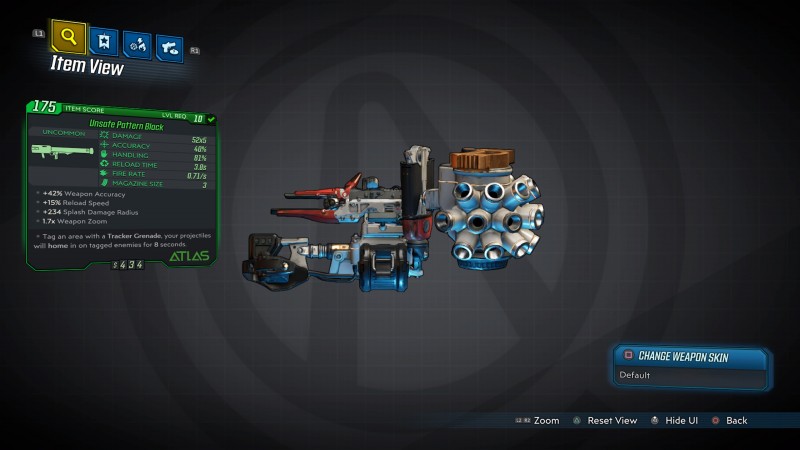 Finally, I’ve found a genuine rocket launcher, and what a beefcake! While the gun has the homemade feel of a high school science project, it packs the wallop of a military-grade armament. Replete with trackers, this launcher’s missiles quickly home in on targets. Furthermore, the trackers come in the form of grenades; if they explode in the enemy’s vicinity, the missiles cannot miss. It’s assured destruction, without the mutual part. 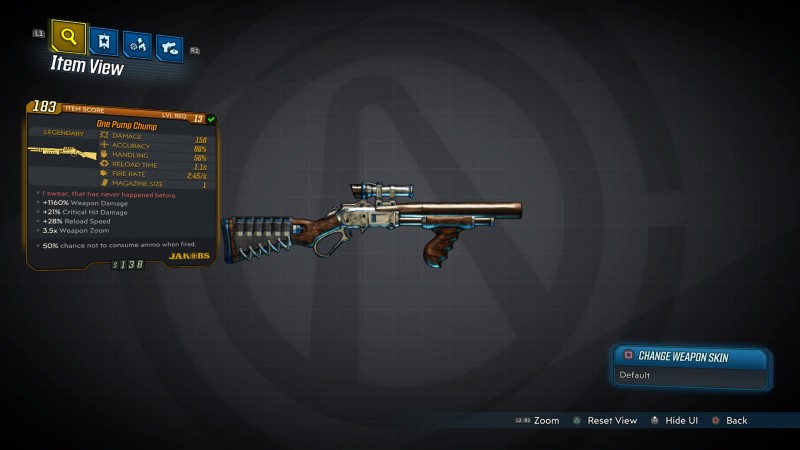 Living up to the One-Punch Man legacy, this godly weapon eradicates enemies in a single hit. A random drop off the One Punch mini boss, the holy armament comes with a hefty price. One Punch killed me multiple times, but it is worth the pain. Alongside deific damage this weapon boasts sniper level range and accuracy – allowing for one-shot kills from across the map. 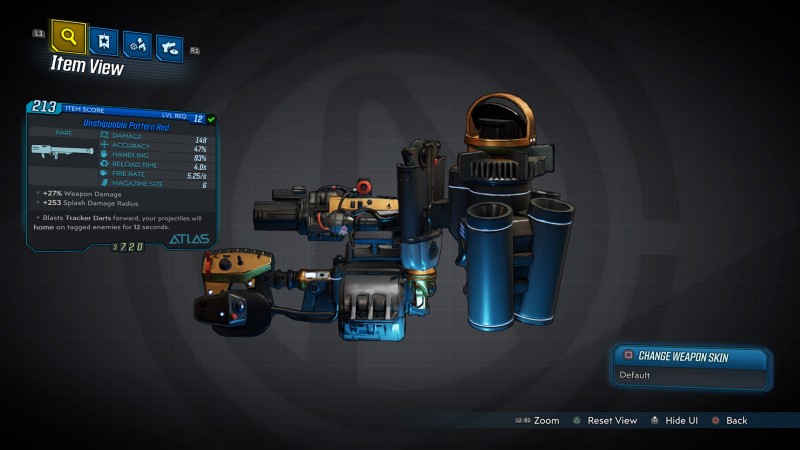 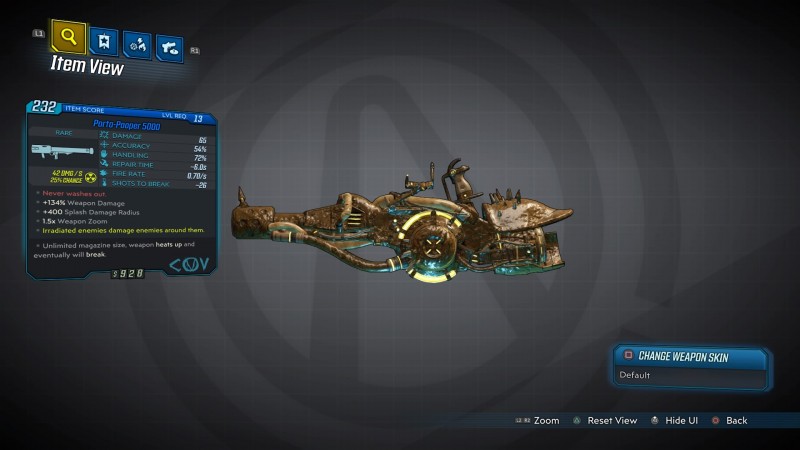 Borderlands has never shied away from potty humor, but this is a whole new level – and I love it! That’s right, I’ve found a launcher that fires not grenades but excrement! The resulting poo puddles are so nasty they cause literal radiation poisoning. The resulting radiation immediately spreads amongst enemies. Even monkeys would envy this gun’s dung throwing power. Unleash fecal fury! 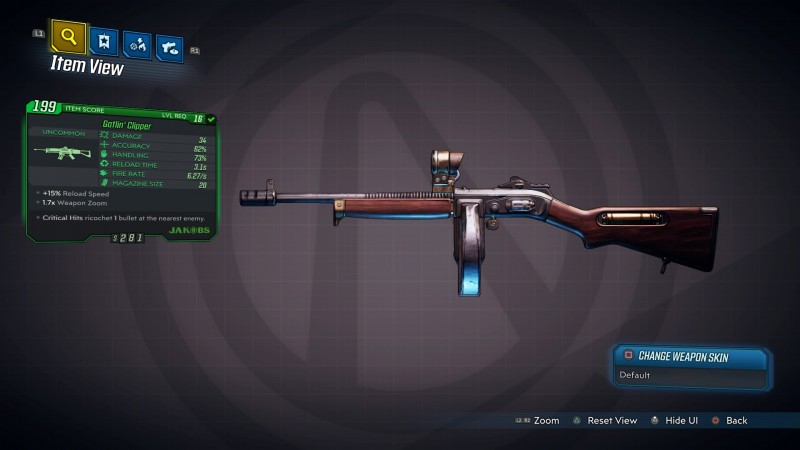 True to the Jackob’s steam punk spirit this assault rifle boasts a classic, Victorian aesthetic. Part Gatling gun, part tommy gun, it captures the unrelenting power of the former while retaining the mobility of the latter. Ripping through health and shields with equal efficiency, it’s fantastic in most situations. Combine excellent accuracy and fire rate with a potent ricochet ability (all critical hits bounce to next closet enemy) and you have an assault rifle that decimates groups about as effectively as it does individuals.

The Unique Guns We Missed

During my tenure on Pandora, there was one mystical gun that eluded me. Rewarded during the Dump on Dumptruck side-mission (activated by the bounty in Ellie’s garage), the beguilingly named Butt Plug is an easy miss. In order to receive the unique weapon, one must successfully shoot Dumptruck’s bum. As my buddy and I unfortunately learned, this is not simply shooting him in the back. Gearbox demands precise iniquity: you must shoot him DIRECTLY in the butt. The easiest way to do this is to wait for him to shove his posterior in your face. Once you have the all clear, go to town. Upon completing the mission you’ll then receive the reward: a bayonetted pistol. Appropriately, this pistol is rather weak at range but devastating up close. It does double melee damage from behind. Venture forth future proctologists!

Borderlands 3 has already delivered multiple ways to engage your foes, and I’m excited to see what creative weaponry the future holds. Stay tuned to find out what other armaments we find!

For more Borderlands 3 be sure to check out our review and our recent discussion on the podcast.