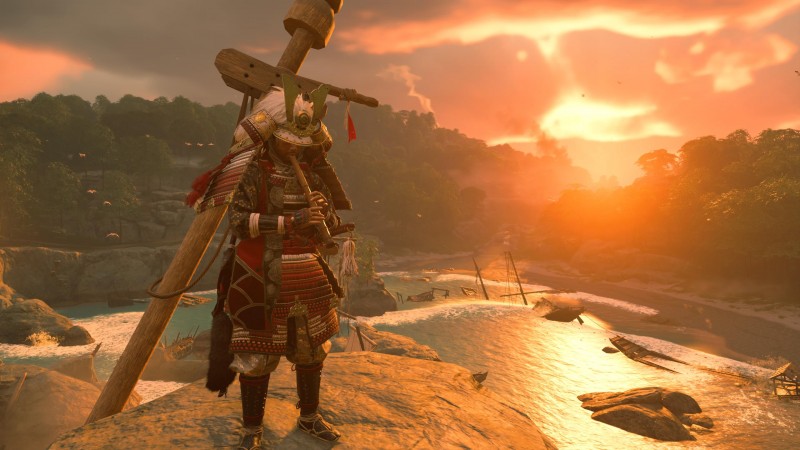 Ghost of Tsushima was one of 2020’s best games. As one of the swan songs to the PS4’s exclusive library ahead of the new generation of hardware, Sucker Punch’s Japanese feudal epic ticked all the boxes – slick combat and stealth, breathtaking visuals, and a mature and thoughtful story about the nature of loss. It also featured one of the most memorable game endings in many years. After that, what more could be added that wouldn’t feel like a retread?

Quite a bit, as it turns out.

Ghost of Tsushima Director’s Cut includes everything that made the original release great, and is available on PS4 or PS5 as either a standalone purchase, or an upgrade from your existing copy. If you haven’t played the game yet, now is an ideal time. The new version includes some bonus upgrade items, like skins and character improvement points, and access to a director’s commentary with input from a Japanese historian on the actual events and period depicted in the game. There’s also the excellent Legends cooperative multiplayer experience, which is well worth playing. If playing on PS5, you also get some fun new DualSense haptic feedback on your controller, new 3D audio when using compatible headphones, and a gorgeous 4K resolution targeting 60fps, which makes for an exceptionally stunning display in a game that already looked very pretty. Even so, I’d question if a paid upgrade for existing players would be justified if that was all you got.

However, the big draw is undoubtedly the Iki Island expansion, a multi-hour new campaign built to impress. Acting simultaneously as a standalone story and as a coda and wrap-up for Jin’s character arc, the adventures players uncover on Iki Island are well worth the price of admission. It would be a stretch to characterize this new area and its missions as a true sequel, but several new story developments, unique side missions, and novel upgrades feel more substantial than I had expected. Closing an important story loop for the main character also leads to a very satisfying addendum to Jin’s narrative, without losing any of the impact of the main game’s powerful conclusion.

Iki Island is set apart from the main game sections on Tsushima, and if desired, you can fast travel back and forth between the two landmasses. To get things going, Jin learns of an impending second invasion of Mongol troops who have amassed on the nearby smaller island and sets out to halt the threat. That means that there’s a new map to uncover, and since Jin’s legend is unknown there, it’s another place to build that legend up (and earn the corresponding technique points). Crucially, we also learn that Iki Island is where Jin witnessed his father’s death as a child. The conflict that led to that personal tragedy is a big focus in the expansion. That means that Jin must travel incognito without the markings of his Sakai clan status – hidden identities always lead to a little added tension.

Conceptually, the story and its conflict act as a leverage point to explore Jin’s haunted past. Without spoiling exactly how, Jin is poisoned shortly after his arrival on Iki, leading him to maddening visions about the many traumatic events of his life. These manifest in-game as visual and auditory hallucinations, forcing the honor-bound warrior to confront his guilt and relive some of his worst moments, both from early life and those witnessed during the main game. I love how these visions pop up throughout the Iki adventure, often in context-sensitive moments that thrust Jin into sudden vulnerability. I also enjoy the Eagle, a terrifying new Mongol villain at the heart of the Iki expansion. However, the Eagle’s looming threat is present mainly in the beginning and end of the story, letting the real antagonist take center stage – Jin’s self-doubt and regret.

Along the way, Sucker Punch has injected several new gameplay tweaks to keep things interesting. One of the most significant changes in combat is the addition of shamans, an enemy type whose chants goad the other enemy fighters into devastating battle trances. Inevitably, these shamans hang out at the back of a squad, so players must dodge and slash their way through the enraged regular enemies to take on the shaman first. Normal enemies are also very dangerous, even for players who’ve maxed out their samurai abilities. Just a couple of hits from one of these foes are enough to deplete a full health bar. Many enemies switch weapons mid-battle, demanding you monitor your stances carefully. Enemy positioning leads to challenging tactical dilemmas about how to manage a fight. In short, it’s all pretty challenging.

Thankfully, Jin also finds some fun new tricks on the island of Iki. Chief among them is the new horse charge. Jin’s faithful steed, hardened by many battles, can now surge forth and trample foes in his path to devastating effect. Enabled in short bursts that you might consider a super-gallop, the action is incredibly potent when employed against larger groups. The horse charge drains Resolve quickly, but it can be a worthwhile gambit to open a big fight.

Iki Island also features some new charms to enhance your battle and stealth process, but it’s here that the expansion failed a bit to tweak my playstyle. In a dilemma confronted by almost every game expansion ever created, you start the game with a playstyle and chosen upgrades uniquely suited to your preference. While some of the new charms are interesting, as well as gorgeous new armor with its own unique bonuses, it’s hard to beat out that fully upgraded loadout you’ve been rocking since the end of the base game – especially considering the challenge level of the content.

I was happily surprised that several existing side activities, like crafting haikus and chopping bamboo strikes, are joined by some clever new additions. Dedicated bow enthusiasts are sure to enjoy the archery challenges, which offer a chance to meaningfully improve the Charm of Concentration, extending your time slowdown while firing off arrows. For me, the big winner was the animal sanctuaries. Jin sits with his flute and plays a tune for animals like cats and deer, tilting the controller up and down to stay on melody. It’s a simple and amusing new activity that maintains the themes of natural harmony that characterized Ghost of Tsushima’s original release.

Beyond bullet point feature lists, Iki Island is also a wonderfully designed playspace. Likely informed by the work undertaken to craft the base game, Sucker Punch has put together a lovely and compact adventure that flows smoothly from beginning to end. New platforming locations are great fun. Side missions to help the inhabitants of the island are thoughtfully written and varied in their objectives. And the main flow of tasks moves seamlessly between big army battles, challenging duels, and sneaky infiltrations. On top of it all is the developer’s attention to artistic grandeur; Iki Island is a land of vibrantly colored forests, stark wave-washed cliffs, and beautiful sunsets. The locale feels like an extension of the art style seen on Tsushima, but with its own identity.

I was happily surprised by the breadth, depth, and challenge of the Iki Island expansion. For new players, it will extend an already lengthy adventure into something more. Meanwhile, returning players should be thrilled at how well this experience dovetails out of an already stellar game. Iki Island is what I want out of single-player game expansions. And it’s further proof (as if we needed any more at this point) that Sucker Punch has a standout new property to continue building on.