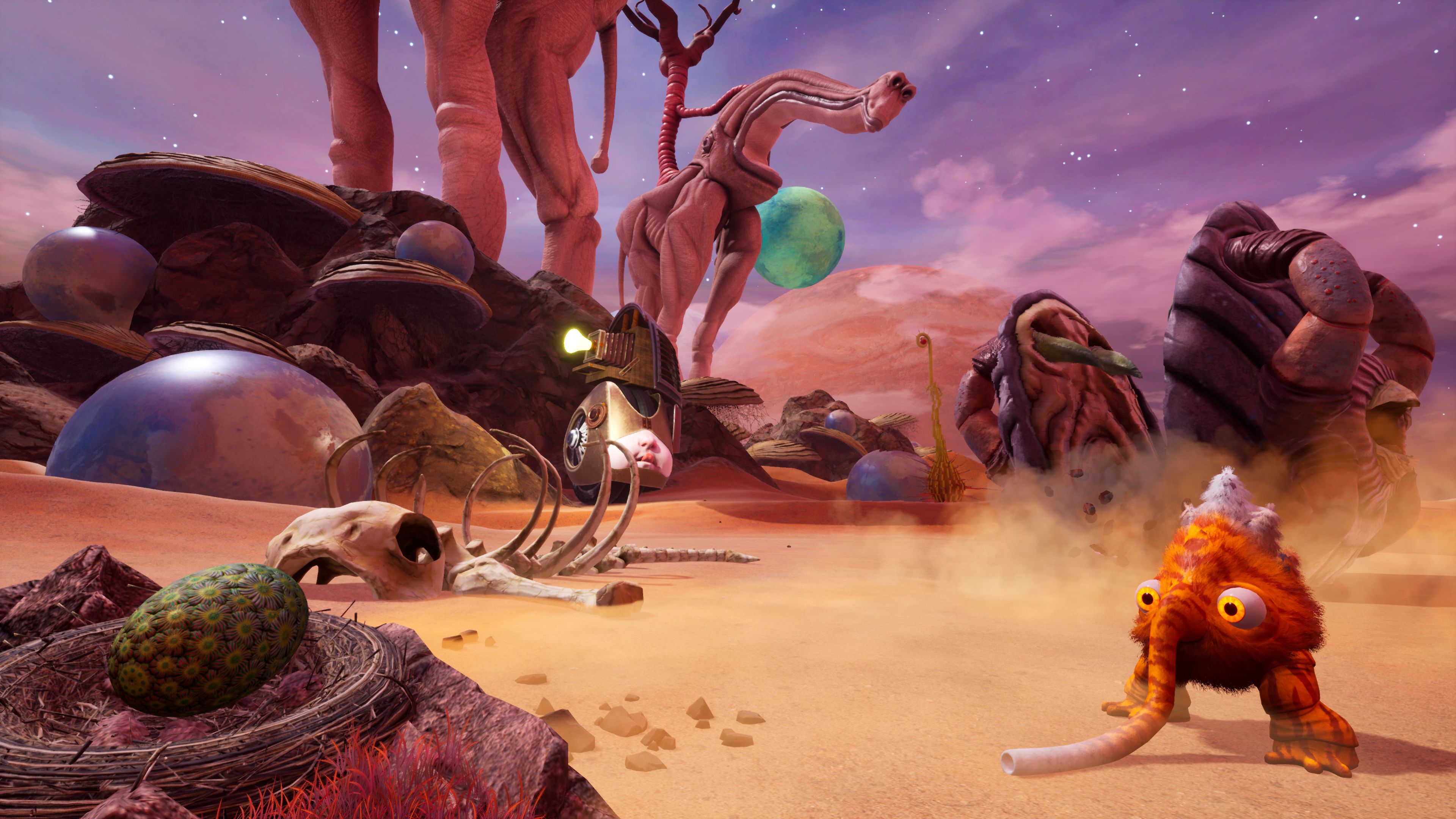 The creators of Zeno Clash have come up with one of the weirdest premises ever, as well as a fun mix of action and survival gameplay.

The Eternal Cylinder has many admirable qualities but the most obvious from the start is how deliberately weird it is. The one thing you can guarantee about the game is that you have never played anything quite like it in terms of story, art design or action. It is difficult to ever be completely unique, especially in terms of gameplay, but this certainly comes close while at the same time being a charming and entertaining puzzle adventure.

Chilean developer ACE Team has never seemed interested in making ordinary games, their first title being the utterly bizarre first person brawler Zeno Clash. Rock Of Ages and Abyss Odyssey were equally odd and while ActRaiser homage SolSerpah was deeply disappointing it’s fitting that the one game they’ve made that’s based on an existing property is not only their worst but the source material was itself highly peculiar.

We say all of this with the greatest of admiration as there’s nothing more dispiriting, especially as a reviewer, than playing the same game you’ve seen a hundred times before with only a new coat of paint to distinguish it. That is not a problem with The Eternal Cylinder, which involves controlling a tribe of constantly evolving alien critters who are attempting to outrun a planet-wide cylinder that crushes everything in its path.

As welcome as it is to play something that is genuinely different the important thing to emphasise about The Eternal Cylinder is that, weird or not, it’s also a lot of fun. The game begins with you taking control of a ‘Trebhum’ as it hatches from an egg and is immediately faced with the problem that the cylinder is right behind it and on the move. There’s nothing you can do to stop it for good but there are a number of pillars dotted across the landscape which, if activated, can hold it back for a little time.

The cylinder is far from your only concern though, as Trebums are pretty weedy little creatures, looking like furry beachballs with just two legs and an elephant like trunk. The alien world on which they live is filled with other much more dangerous lifeforms, as well as some that are just as vulnerable as you, which you can eat and gain new abilities. These range from growing longer legs to jump higher, growing suction feet, and gaining the ability to snort fire or grow flippers.

There’s also a significant survival element to The Eternal Cylinder and from the outset you’re encouraged to seek out other Trebhums, either already hatched or still in their egg, and recruit them to your family group, to help with puzzles and combat – with the ability to switch control between any of them whenever you want. This is essential because despite their special abilities Trebums die easily and you always need replacements. Collecting a range of different resources is also vital and additional Trebums essentially act as portable inventories.

You need to keep you and your companions regularly feed and watered but the game is neither open world or entirely linear, with an unusual structure that allows you to anticipate when exactly the cylinder will start moving again. In most instances you can be confident it won’t start moving again without you purposefully triggering it, allowing you to explore the currently demarcated area of the game world at your leisure.

This can include small open world areas filled with a whole ecosystem of increasingly strange lifeforms but also dungeon areas that are more puzzle or platform based and which give you a chance to practice working as a team, with your other family members.

Despite the stop-start nature, progress never feels repetitious, with each new movement of the cylinder bringing you into contact with ever stranger creatures and obstacles. There’s an obvious Dalíesque influence on the art design, as well as Picasso and ACE Team favourite Hieronymus Bosch, but not slavishly so and every new creature, from the giant perambulatory mouths to weird cyborg-like humanoids, is more bizarre and disturbing than the last.

There’s also an obvious influence from artist Roger Dean, with the game not only looking like a 70s prog rock album cover but sounding like one too. Everything about the sound design is excellent though, from the alien noises of the various creatures to the dreadful crunch of the cylinder itself.

The cylinder and game structure is heavy with symbolism of the cycle of life, and inevitability of death, but you can also read an environmental message into it, given the thoughtless destruction of the beautifully strange landscapes. Or perhaps the game is also trying to underline how necessity is the mother of invention, with creative ideas constantly in danger of being steamrolled into a texture-less pap. The game doesn’t push any specific explanation and you’re left to come to your own conclusions.

At around 12 hours long The Eternal Cylinder is a substantial experience without ever being in danger of outstaying its welcome. It has its flaws but none of them are close to being ruinous, with a slightly too restrictive camera and the important role of the narrator not being quite as good a voiceover as it needed to be.

The bigger problem with the narration though is that it gives too much away, especially in terms of dungeon puzzles, with ACE Team no doubt worried about asking too much of players already bedazzled by the game’s carnival of oddness.

The survival elements relating to eating and drinking are also a little undercooked and the game lacks a certain physicality and precision in its movement and combat, but since this isn’t solely an action game that’s less of a problem than it could’ve been.

What kind of game it actually is, is reassuringly difficult to say. It straddles multiple genres but doesn’t fit neatly into any of them. The Eternal Cylinder is not something that’s been created by focus groups but by a passionate team of developers that made exactly the game they wanted to. Sometimes that can lead to an overindulgent mess and sometimes, as in this case, it can lead to one of the most fascinatingly original games of the year.

In Short: One of the most enjoyably weird games of recent years and yet surprisingly easy to grasp, with an engaging mix of action and survival gameplay – and a good dose of surrealist imagery.

Cons: Undercooked survival elements and the action controls lack physicality. The narrator voiceover and camera could be better.