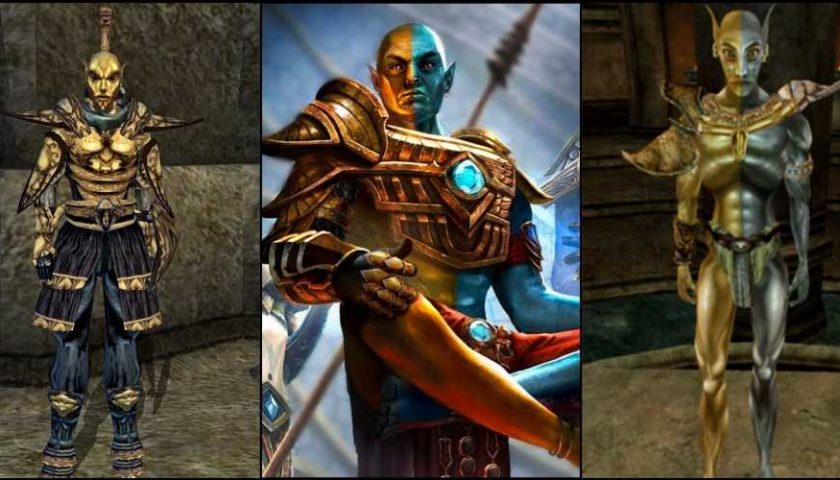 The world of The Elder Scrolls is deep and full of lore. The series has plenty of interesting characters, shocking events, and unique stories, unlike anything we’ve ever seen before in gaming. Of all the playable races, the Dark Elves have a fully-fleshed-out backstory with one controversial figure at the heart of it.

Vivec became a legend to the Chimer, the ancestors of the Dark Elves, and later the Dunmer, but to understand the man, you have to go back to his early life. Vivec’s story has many ups and downs. The warrior-poet was partly responsible for the disappearance of the dwarves and certainly found a way to leave his mark on the Dunmer people. 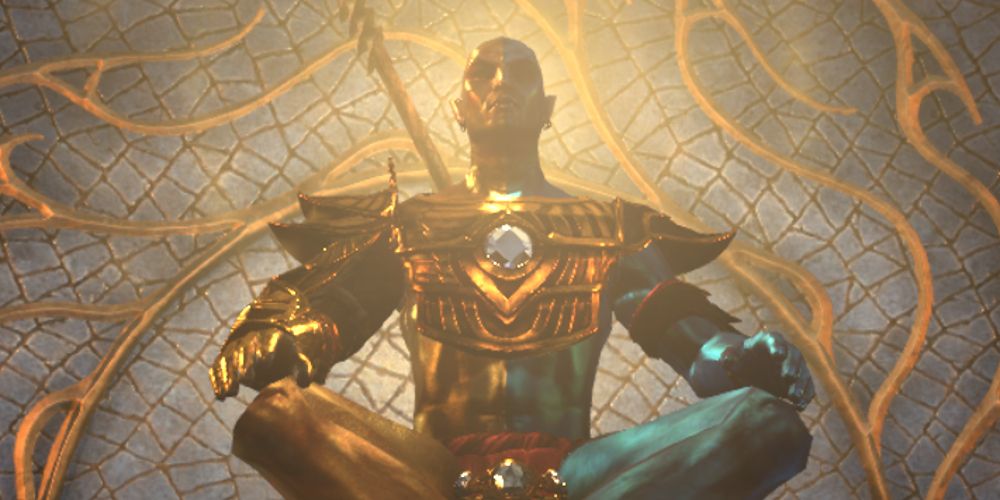 Vivec was born in Mournhold to a netchiman. His dad hunted the flying Netch commonly found in Morrowind. Vivec would go on countless hunts with his dad and enjoyed spending time with his father.

Vivec was eventually orphaned and lived on the street. Completely illiterate, he focused on the arts, specifically singing and dancing. Vivec was a notorious gang leader in his teenage years, and his group would do anything for money. It was when he met Nerevar that his life changed for the better.

Nerevar was working as a caravan guard when he met Vivec. Nerevar could tell that there was something special about Vivec, so they quickly became friends. Vivec realized Nerevar had great ambitions and joined him on his quest. Shortly, after Nerevar married Almalexia and became the Hortator (read: leader) of House Indoril. Indoril was one of the six great houses of Morrowind at the time, along with Redoran, Telvanni, Dres, Hlaalu, and Dagoth. Being the leader of a great house was a very big deal, and being close friends with one also had its benefits.

Nerevar wished to free Morrowind from the Nords who were invading at the time, expanding their empire. Despite the constant conflict between the Chimer and the Dwemer, the two sides agreed to push the Nords out of Morrowind. It was Vivec’s diplomacy that helped create this alliance. Vivec fought alongside Nerevar during this time, and they succeeded in pushing the Nords back to Skyrim. After their success, Vivec became one of Nerevar’s most trusted advisors, along with his wife Almalexia and Sotha Sil.

The War And The Curse 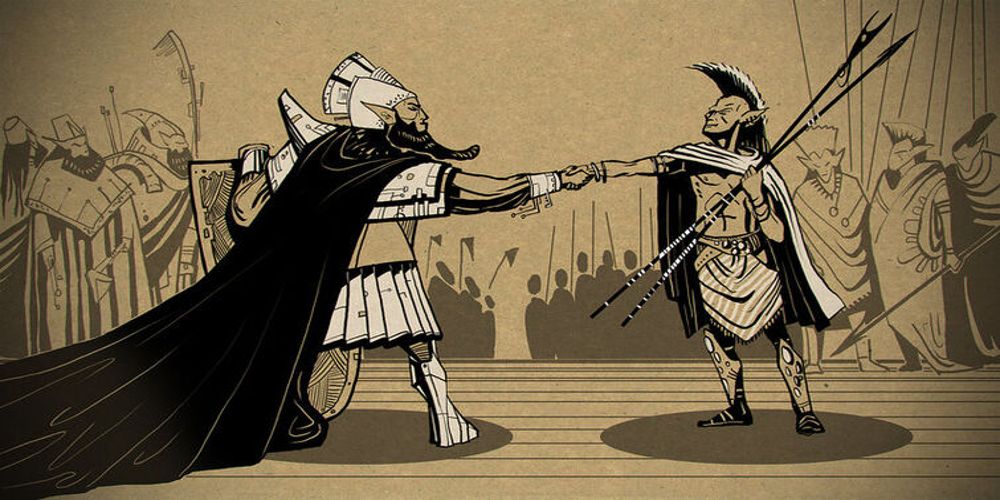 Realizing that they were stronger as allies than as enemies, the Dwemer and the Chimer agreed to continue their alliance, creating what would be known as the First Council. Vivec, Sotha Sil, and Almalexia did not believe peace between the Dwemer and Chimer could last and let Nerevar know their thoughts, but he didn’t listen.

The Dwemer eventually broke their truce when they mined into the famous Red Mountain and discovered the Heart of Lorkhan, an Aedric artifact. Their engineer, Kagrenac, created tools to harness the energy of the Heart of Lorkhan and wanted to use this energy to power the Numidium, a thousand-foot tall Dwemer centurion. Kagrenac wanted the Numidium to be the new god of the Dwemer people.

Once Nerevar discovered what the Dwemer were up to, the War of the First Council began. All the great houses, other than Dagoth, allied with Nerevar to fight the Dwemer. The result had devastating consequences for everyone involved. The Dwemer and House Dagoth were eradicated. As for Nerevar, he was said to have been killed by one of his most trusted advisors, Vivec. 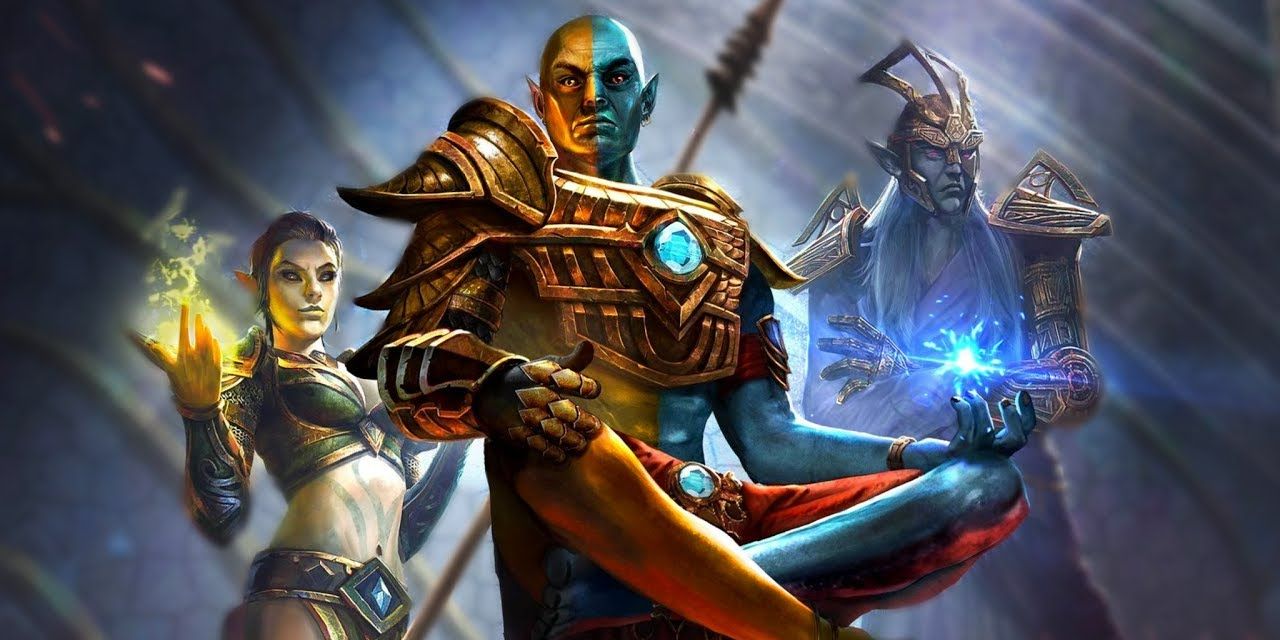 Although it is not known for certain, it’s believed that Almalexia, Sotha Sil, and Vivec were responsible for Nerevar’s death. After learning about the power inside the Heart of Lorkhan, the three discussed whether they should harvest its energy to become gods. Initially, Almalexia and Vivec were against it, but Sotha Sil eventually convinced them.

The three returned to the heart chamber of Red Mountain and used Kagrenac’s tools to harness the power of the Heart of Lorkhan. Doing so garnered the attention of the Daedric Prince Azura, who cursed the Chimer people and made them the Dunmer, giving them blue-gray skin and red eyes. She said that Almalexia, Sotha Sil, and Vivec would pay for what they did, and Nerevar would eventually come back.

Almalexia, Sotha Sil, and Vivec would become known as the Tribunal and were seen as gods to the Dunmer people. They became the highest-ranking members of the new Grand Council, which replaced the First Council. The Dunmer previously worshiped the Daedric princes Azura, Boethiah, and Mephala, but after getting cursed, they decided to switch allegiances to the Tribunal.

Each member of the Tribunal had their specialty, and Vivec was the patron of artists and rogues. Vivec turned Vvardenfell, the island where Red Mountain is located, into a holy temple. He directly supervised the island and played a big role in shaping its society. Vivec even had a city built in his honor, called Vivec City, in southern Vvardenfell. Almalexia and Sotha Sil also had cities built or expanded to honor them. 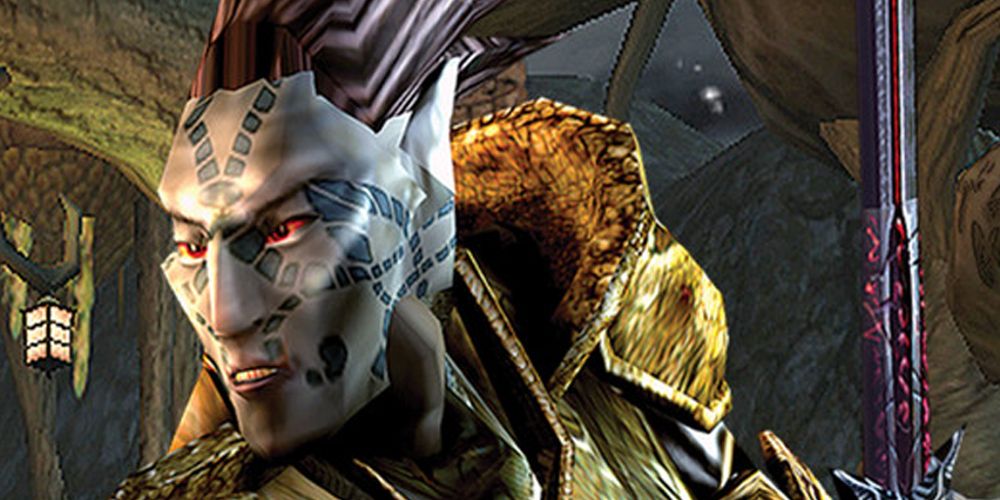 For thousands of years, Vivec and the rest of the Tribunal ruled over Morrowind without any major problems until the Nerevarine Prophecy rang true. Indoril Nerevar returned, reincarnated as the Nerevarine, the player character in The Elder Scrolls 3: Morrowind. It wasn’t just the Nerevarine that returned as Dagoth Ur, the leader of the eradicated House Dagoth, would reappear as well.

The situation was bleak, and the only solution to defeating Dagoth Ur was to destroy the Heart of Lorkhan. Doing so would save Morrowind, but it would also cause the Tribunal to lose their god-like powers, rendering them mortal. While Almalexia and Sotha Sil were opposed to the idea of becoming mortal once again, Vivec was not. He was willing to help the Nerevarine, even if it meant losing his divine power.

The Nerevarine defeated Dagoth Ur in battle, but it caused Almalexia to spiral out of control and kill Sotha Sil. After Almalexia eventually targeted them, the Nerevarine had no choice but to kill Almalexia, leaving Vivec as the only living member of the Tribunal. 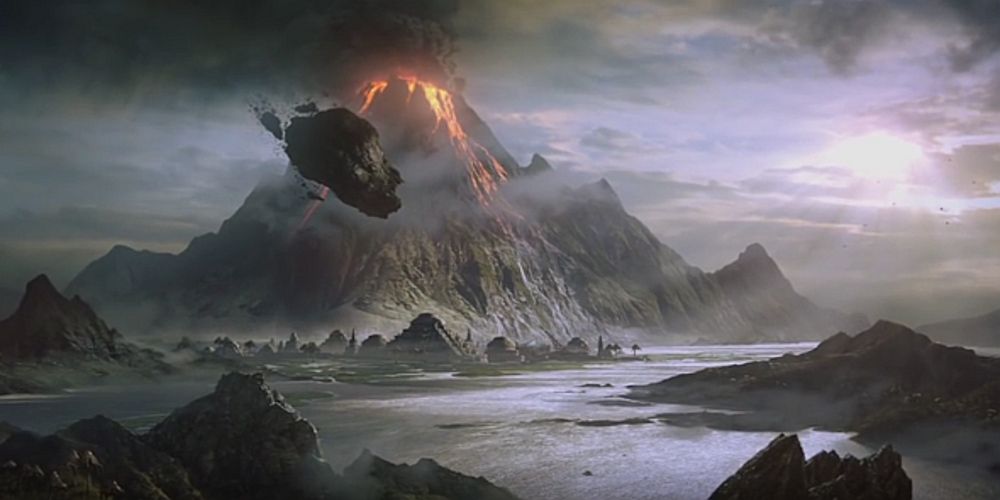 Despite the death of his two closest allies, Vivec pressed on. He guided the Dunmer people and stayed in Vivec City, where he used his divine energy to prevent a meteor known as Baar Dau from falling on his beloved city. He used his energy to prevent this meteor from colliding with Vivec City for thousands of years – it was the Daedric Prince Sheogorath responsible for shooting this meteor towards Vivec City and did so as a way to rebel against the Tribunal.

During the Oblivion Crisis, many oblivion gates opened up around Tamriel, and Vivec disappeared from the continent around this time. Supposedly, Vivec was either taken by the Daedra or killed by the Nerevarine, but no one knows what happened to the warrior-poet.

Despite the Dunmer’s best efforts at keeping Baar Dau at bay, five years after Vivec’s disappearance, the meteor collided with Vivec City. This collision triggered the second eruption of Red Mountain and started the Red Year, which caused a mass migration of Dunmer to other provinces across Tamriel.

With all three members of the Tribunal now gone, the New Temple was created. It reinstated the worship of the “Good Daedra” or the “True-Tribunal”: Azura, Beothiah, and Mephala. The New Temple also referred to Almalexia, Sotha Sil, and Vivec as the “False-Tribunal” while dubbing each member a “saint.” Going from a god to a saint is certainly a demotion, but it’s unlikely that Vivec regretted any of his actions from the day he was born to the day he died. Vivec was a controversial figure for the Dunmer, and while he hurt his people at times, he helped shape Dunmer culture into what it has become.