A barfing cat isn’t anything especially out of the ordinary, as any cat owner can tell you. But late last week in Elder Scrolls Online’s new Elsweyr expansion, I saw a talking housecat with an eyepatch barf while casting a spell that was supposed to drop me and some friends behind enemy lines. Instead, she plopped us almost right in the thick of them.

And this tale gets weirder still: It wasn’t a hairball that messed her up, but rather the aftershocks from her wild bender from the night before. (At least she had the decency to feel bad about it.) Even more bizarre things await in Elsweyr, whether they be emo necromancers or dragons that spit insults as readily as fire—and yet for all that, I can’t shake the feeling that Elsweyr isn’t quite weird enough. 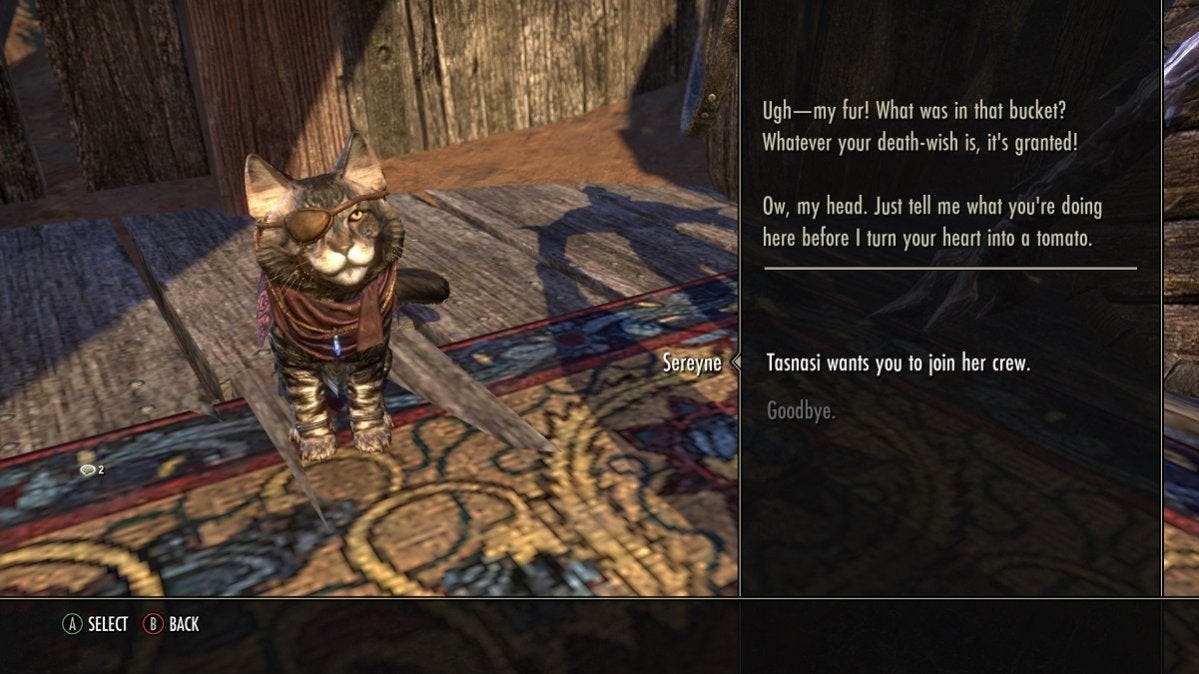 Maybe I’m expecting too much from the setting. With a name that basically amounts to “Elsewhere,” it should be ripe for the kind of trippy landscapes we’ve come to expect from the Elder Scrolls series, whether they be the mushroom houses of Morrowind or the laser-latticed skies of Arteum in last year’s Summerset chapter. Northern Elsweyr, by contrast, looks a lot like Sedona, Arizona.

That means it’s a land that’s not quite living and not quite dead, so it’s a fitting stage for the core conflict of undead armies struggling for dominance over the living (to say nothing of the few big lizards skittering about). But that also means it’s a very “earthy” place, and for that matter, it doesn’t look too different from the neighboring zone of Reaper’s March that has been in the game for years.

If you’re seeking weirdness from the environs, you’re most likely to find it in the architecture of the native Khajiiti people (or cats, or whatever). It’s the very definition of “eclectic,” as it pulls from liberally from a grab bag of Asian styles ranging from Indian and Arabic to Cambodian and still manages to create what feels like a coherent aesthetic. The appeal lies in the details: in the friezes and giant statues of cats mounted on cats lining dusty passageways. The debts to real-world styles mean the cities aren’t as otherworldly and memorable as what we saw in Morrowind, but the near-total absence of these styles in other games imbues them with a surrealism all their own. 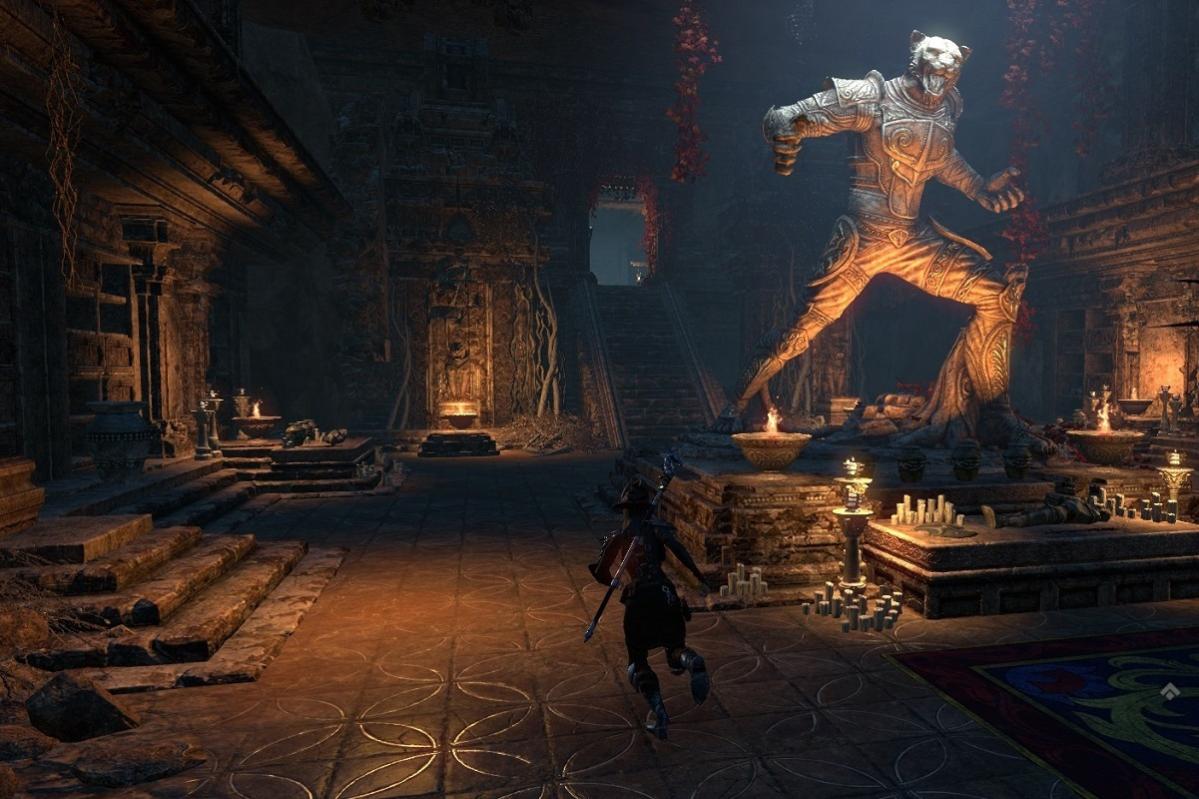 The details in the architecture also serve as another example of how ESO excels at giving dignity to races that normally get treated like cat barf in games like The Elder Scrolls V: Skyrim. Beyond the core game, ESO first did this with the orcs with its Orsinium downloadable content from 2015, which provided the first hints that ESO would survive following its bumpy start and massive redesign. In Summerset, developer ZeniMax Online Studios dared to do the same with goblins (of all creatures), and last year it even managed to make the lowly Argonians come off as one of the most fascinating races on the continent of Tamriel. 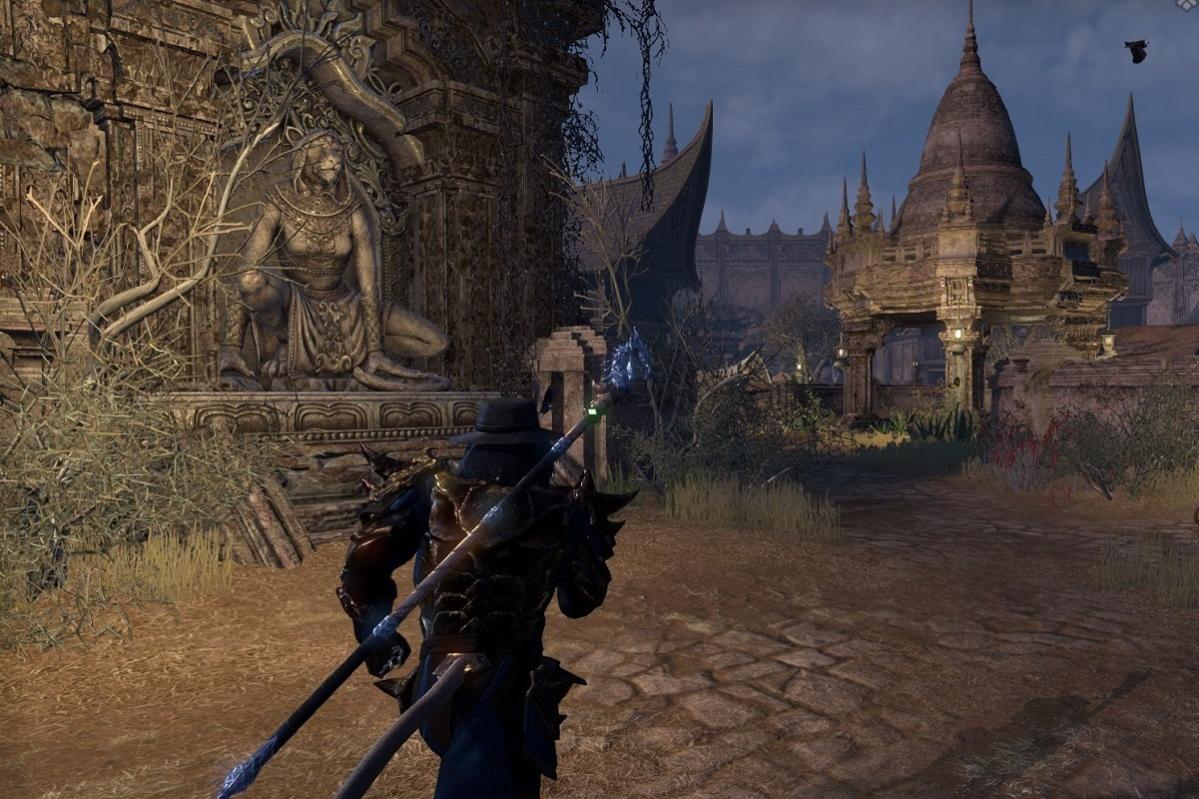 Rimmen’s where all the cool cats hang out.

And so it goes with Elsweyr, as this chapter elaborates on the culture of the Khajiit in ways we’ve never seen before. We get to tag along with them in their moon-based rites, largely free of the expected druggie jokes about moon sugar. We learn the reason why some Khajiit look like house cats, why some look almost like people, and why still others look like lions. (It’s not clear which form they prefer.)

All those wonderful architectural styles come together in the main city of Rimmen, which in turn is stuffed with every kind of crafting table and merchant within easy reach. It’s enough to make it an appealing alternative to the core game’s crowded village of Rawl’kha, whose many similar conveniences have made it a de facto endgame hub (and lagfest) for years. Elsweyr also gives players a big new house that’s right around the corner from all these shops just for playing through the main quest, and it’ll only get bigger as ESO’s planned “Season of the Dragon” sequence of downloadable content drops two new patches in the coming months. Elsweyr, ZeniMax fervently seems to hope, is a place that players will want to call home once the questing’s done.

A tendency to drag on

The main quest itself is just as much of a mishmash as the architecture, but with less pleasing results. There’s simply too much going on. I’ve long been convinced that ESO’s attitudes toward expansions rely on a mix of nostalgia for the “famous” Elder Scrolls games and chances to learn new lore, but Elsweyr‘s main story arc sees ZeniMax attempting to cover too many bases at once.

It’s got dragons and necromancers and sibling rivalries! It’s got invading armies and cat people, oh, my! It’s also got some good roles for two of The Elder Scrolls Online’s best-loved characters, and another variant on the ever-popular Fantasy Hero Who’s Not Who They Claim To Be. The story juggles most of these concepts well enough, but it never seems too sure of what to do with the dragons. They make for stunning boss fights and have some catchy lines, but it’s hard to shake the impression that the story might have been better off if Elsweyr had solely focused on the necromantic threat. 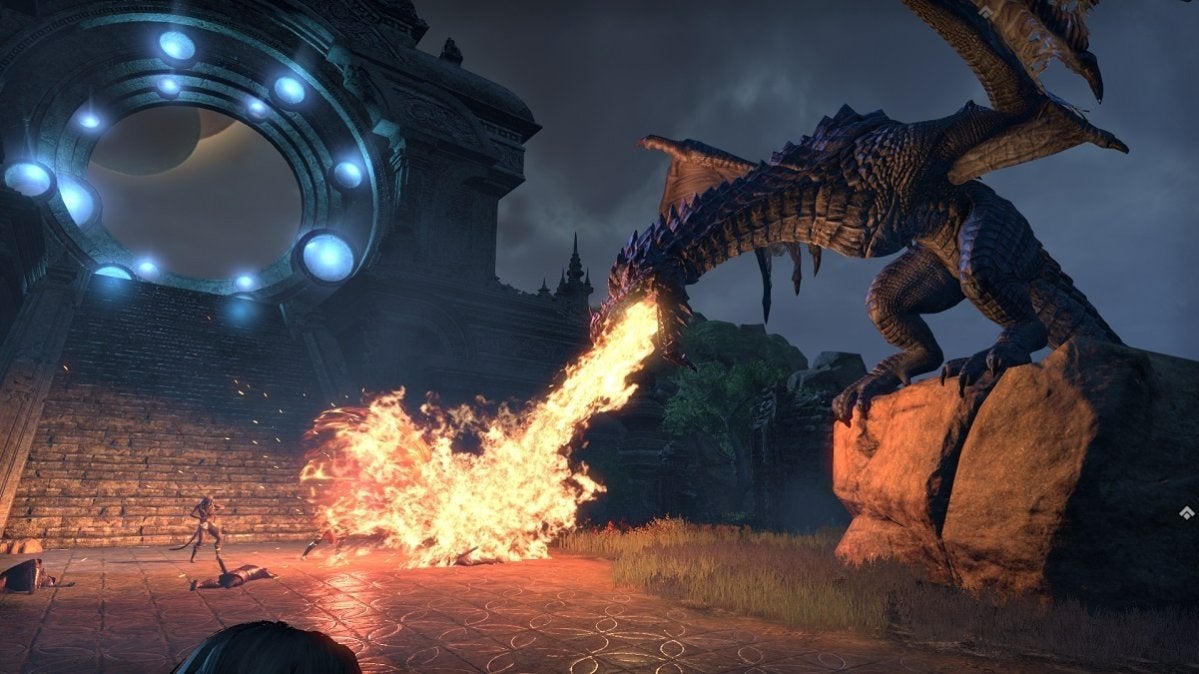 But then, sadly, I would have missed out on sights like this one.

The dragons come into their own in the outside world, where they fly around for a bit before giving players a chance to thwack them as though they’re fanged piñatas. They’re tough, though, which means you shouldn’t expect Skyrim-like battles in which one dude suffices to shout their souls out of their scales. They’re so strong, in fact, that they can kill even some of the best-geared players with a well-timed slap from their wings or tails, and their bad breath is quite the killer. They’re stunning at first, and it’s cool to see them lift off from the battlefield and perch on nearby ledges in order to lob a fireball before landing for another tussle.

In this frenzy, it’s also easy to forget that dragons are basically reimaginings of the quasi-random Dark Anchors and Abyssal Geysers that have been in the game for ages. As with Dark Anchors, the dragon battles always happen on the same spots on the map. As with Dark Anchors, they drop some decent loot once the battle’s done. Heck, they’re already starting to be so routine that players have taken to joining groups that kill them in one spot after another in order to soak up the massive experience points they yield, much as players have long done with the Dark Anchors in the base game’s Alik’r Desert. 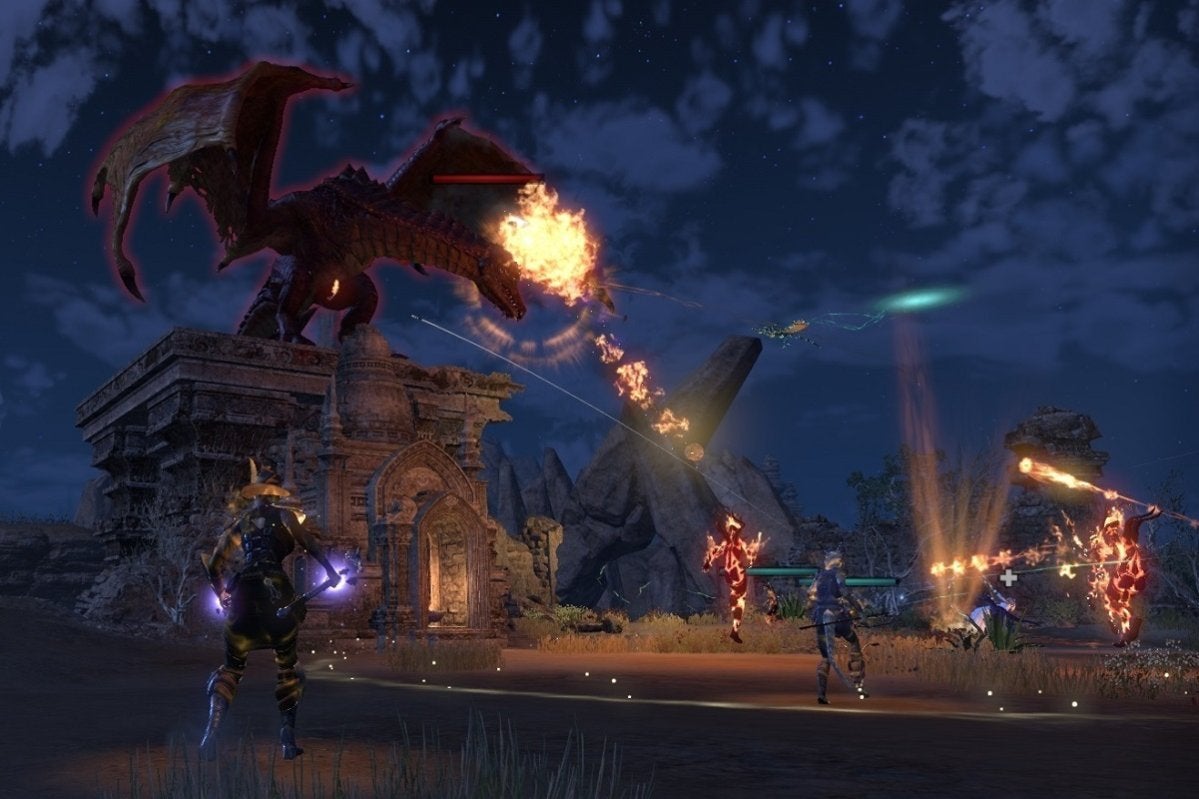 It’s quite possible to solo Dark Anchors, but dragons are basically raids that require many people. And I hope they stay that way.

The dependability robs the dragons of much of their menace. After two weeks, they’re almost dull. In some respects, they’re even a step down from Dark Anchors. In the latter, you’ll sometimes see bosses with proper names that drop better loot and award achievements. The dragons, though? They’re always called “Dragon.” It’s quite the weird flex considering how the dragons in the main story enjoy boasting about themselves and their supposed superiority over us unworthy humans (and cats). But as far as action goes? They’re massive improvements.

Sympathy for the dead

Often Elsweyr’s best stories come out of quests that barely touch the dragons at all, such as one that led me to the heist in which I met my beloved barfing house cat.

Elsewhere (ha), another questline broke from cat-and-dragon themes completely and led me to help solve some grisly family business with a Dark Elf assassin. ESO’s writers are at their liveliest among the dead. In one of the six new delves—essentially, one-person dungeons—I saw the rough outlines of the plot of Pet Sematary acted out in the context of big cats and necromancers. Still another showed the benevolent side of spellcasters who like to tinker with corpses, as I teamed up with yet another elf to see why a bunch of corpses were having far too wild of a party at an old temple.

And it’s not just the stories where Necromancers shine. Much as Blizzard did with Diablo III in 2017, ZeniMax has introduced Necromancers as a class to inject new life into an aging game. They’re ridiculously versatile, as their trees allow them to tank, heal, or do damage. They can pull additional power from the enemies they kill, and their “ultimate” abilities let them turn into hulking skeletons or summon giants that crush their foes. I especially like that most of the abilities have options for both stamina and magicka builds, which fixes the long-running problem of ESO’s stamina builds playing largely the same regardless of class. 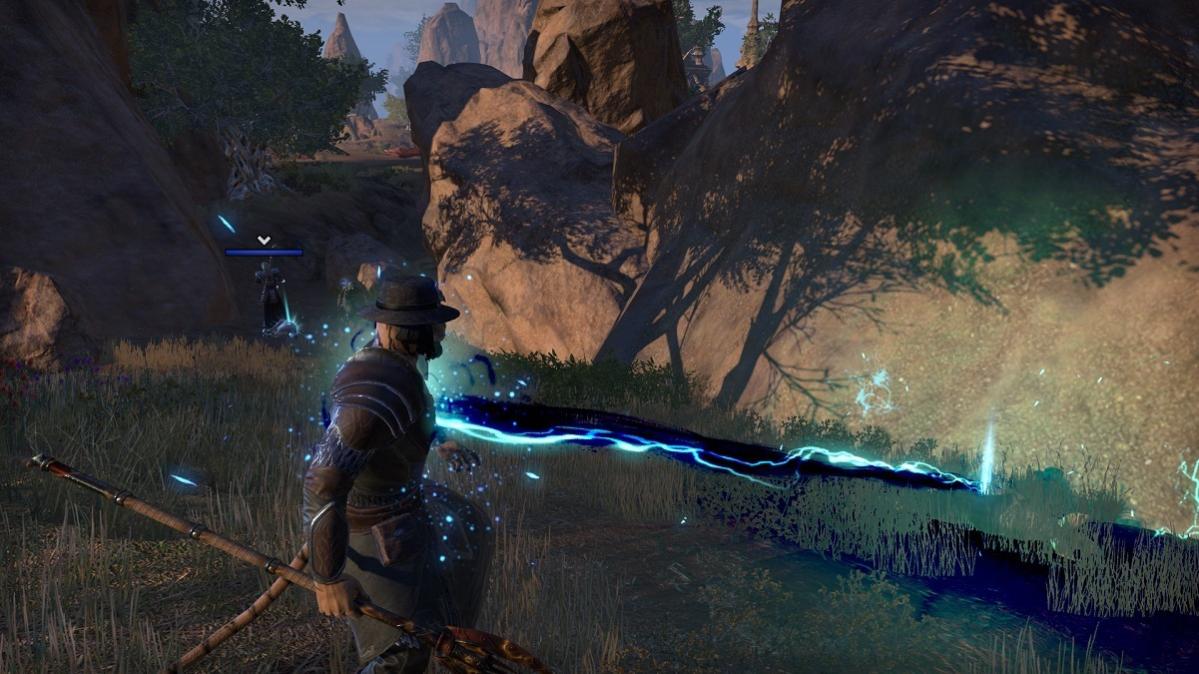 Ever feel like you end up sucking all the life out of everything around you? Why, you should play a Necromancer!

Aside from the Sorcerer, it’s the first class that feels as though it rightfully belongs in the lore as we knew it before The Elder Scrolls Online existed. You can pull the energy from both corpses that you summon and the corpses of other players. Multiple quests acknowledge your status as a playable Necromancer, such as when I got to call out the battlemage Abnur Tharn for griping about Necromancers when I was standing right in front of him. And if that isn’t enough immersion for you, using some necromancer skills in town will bring the wrath of the guards down upon you. It makes the world feel more alive, more real. After all, none of us wants to see our dead grandma come clawing out of the earth during a sunny afternoon at the market. I mean, barf.

Beyond that, Elsweyr has all the features we’ve come to expect from an ESO expansion. 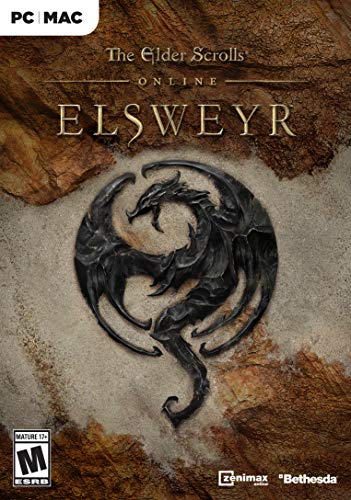 There’s a new 12-player trial called Sunspire that’s surprisingly friendly to players who don’t have sky-high champion points. You’ll also find two new public dungeons—essentially delves, but better suited to at least two players—along with six world bosses, skyshards for skill points, and a neat little exploration quest that rewards you with a mural for your big new house if you find all 16 pieces.

There’s around 30 total hours of content if you don’t count the trial, and as a reminder, if you’re new, you can start all these new dragon-filled adventures straight from Level 1 if you buy the $50 version that includes both Elsweyr and the core game. If you’re only upgrading from the base game, Elsweyr will cost you $40. 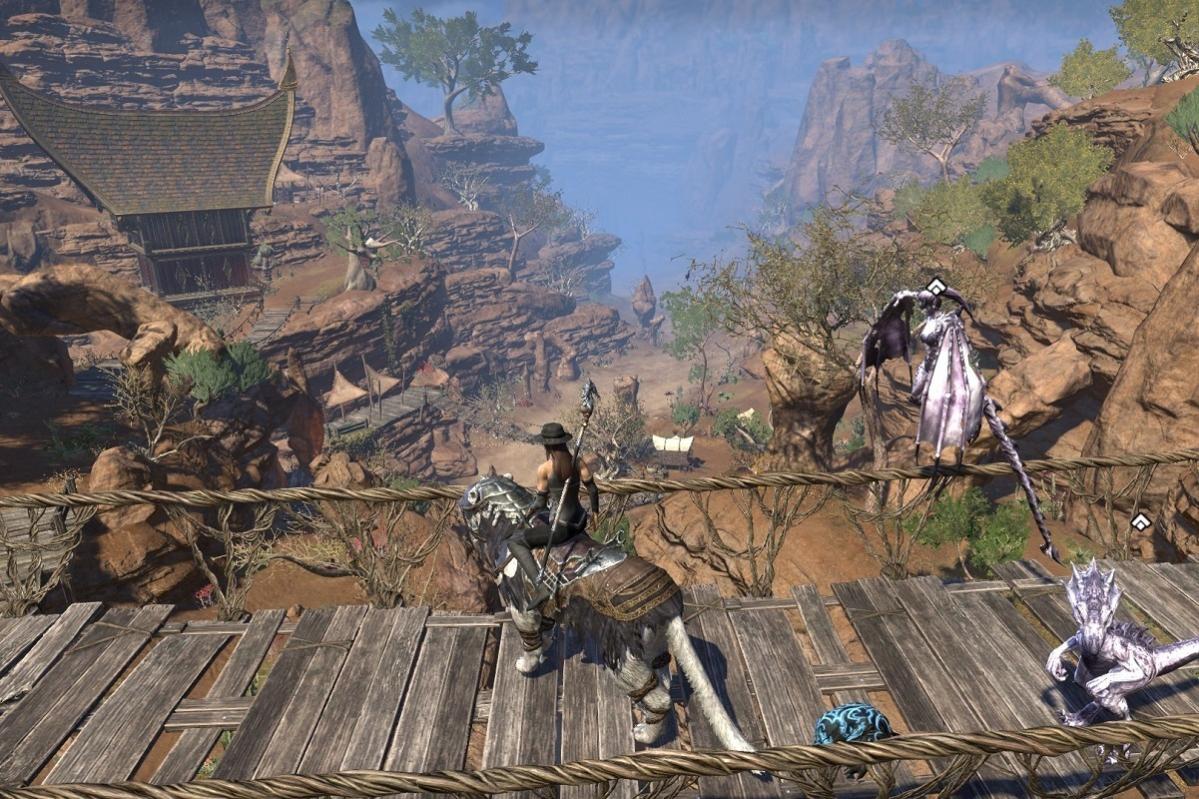 Gonna take my cat to the old town road.

It’s largely worth it. Elsweyr is an enjoyable expansion that’s packed with dragons, necromancers, and a fascinating race of cat people. It’s brimming with the kind of content that has made The Elder Scrolls Online one of the best MMORPGs around since its overhaul in 2015. The main story and setting don’t quite deliver the magic that made Morrowind and Summerset so memorable, but Elsweyr manages to make up for it with the excellent new Necromancer class and a series of side quests that highlight the complexity of Khajiiti culture.

Let’s put it this way, so I can end on a bad pun while I’ve still got your attention: In all those hours, I never found myself wanting to be elsewhere.