Tom Clancy’s The Division 2 recently got an upgrade with Title Update 11, which was detailed in the August 26 State of the Game livestream. This update repairs a major problem players were having with erratic ‘Rainbow Loot’ drops. It also adds in new gear, a reworking of gear mod slots, and a host of bug fixes in preparation for the upcoming season three.

The main irritation fixed in Title Update 11 was the problem with ‘Rainbow Loot’, which refers to the color-coding system given to loot drops to signify their level of quality. Many players try to collect gear of a certain color (quality) that best fits their playstyle, or we look for items with a variety of colors to create a specific type of character build. Problem was, the attributes connected to an item’s color were not weighted. So, when a loot item dropped, and it’s color and attribute were randomly rolled, there was only an 8.3% chance of an attribute being rolled with that item.

Thankfully, according to the Title Update 11 patch notes, the devs are drafting a better system, one that will “ensure a 100% chance that the first random attribute on a piece of gear is the same color as its core attribute, resulting in a 25% chance that players get the particular attribute they’re looking for within that color.” This sounds as if it’s going to be a huge bonus, whether you actively farm loot of a specific type or color, and even if you just take and use whatever loot happens to drop. The patch notes add that this fix won’t apply to second attribute rolls (still random), and any random attributes after the second have “a 9.1% chance of appearing.”

Another important fix with this update comes by way of changing our gear mod slots to a generic setting, meaning they will no longer be specific to any color. Actual gear mods will still be color-coded, but now we won’t have to grimace each time we get one with a color we don’t have a matching gear mod slot to slide it into. Cutting gear mod slots free from their color confinement open our gear up to a whole new level of variability and customization. 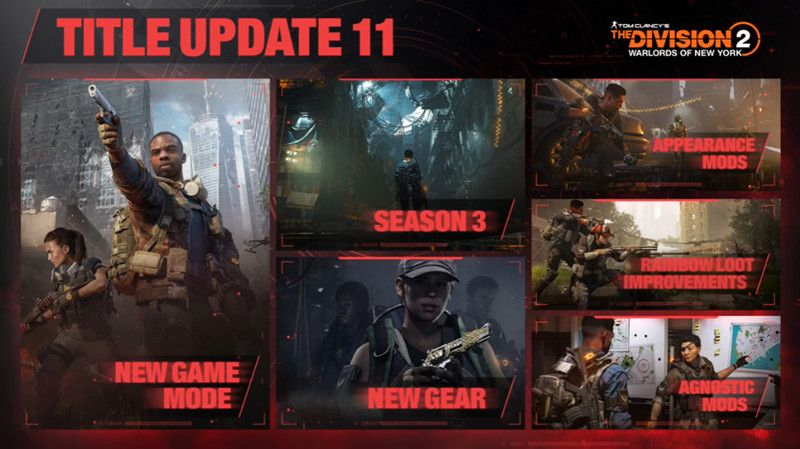 Check out the patch notes post and the State of the Game vid for detailed info on what else is included with Title Update 11, such as Manhunt Target Titan, and the new Ensnare and Confusion stats on resistance mods.