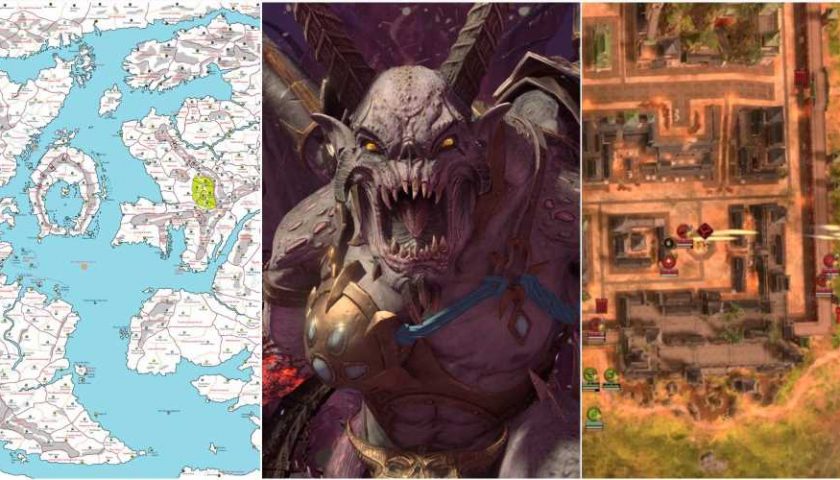 Whether that is good or bad, is up to you, and probably depends on whether this is your first Total War: Warhammer game, or if you are a veteran player. From revamped siege battles to the eight-player coop, here are things only players of the previous games in the franchise noticed. 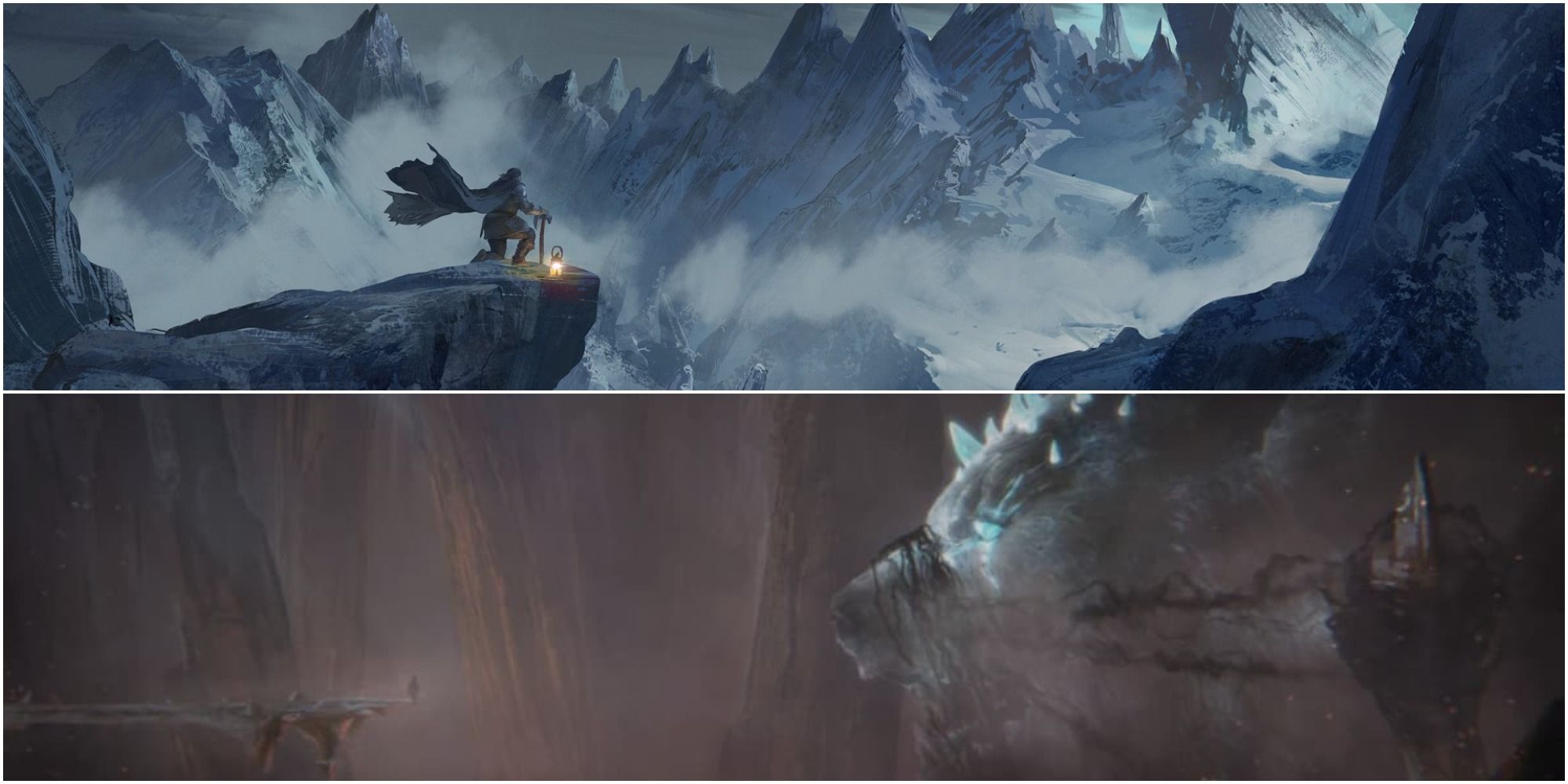 Although Total War games have featured tutorials before, they were never as story-driven and of such high quality as the prologue in Warhammer 3. It's predecessor completely lacked any tutorial whatsoever, so having this included is a pleasant surprise. For beginners and veteran players alike, it is the recommended way to start the game.

You will get to gradually experience all the (new) gameplay features of Warhammer 3 and will be introduced to the setting and story. The cinematics and voice acting are of consistently high quality and will make you feel like you are playing the game, rather than just a tutorial.

9 Diplomacy Has Been Reworked 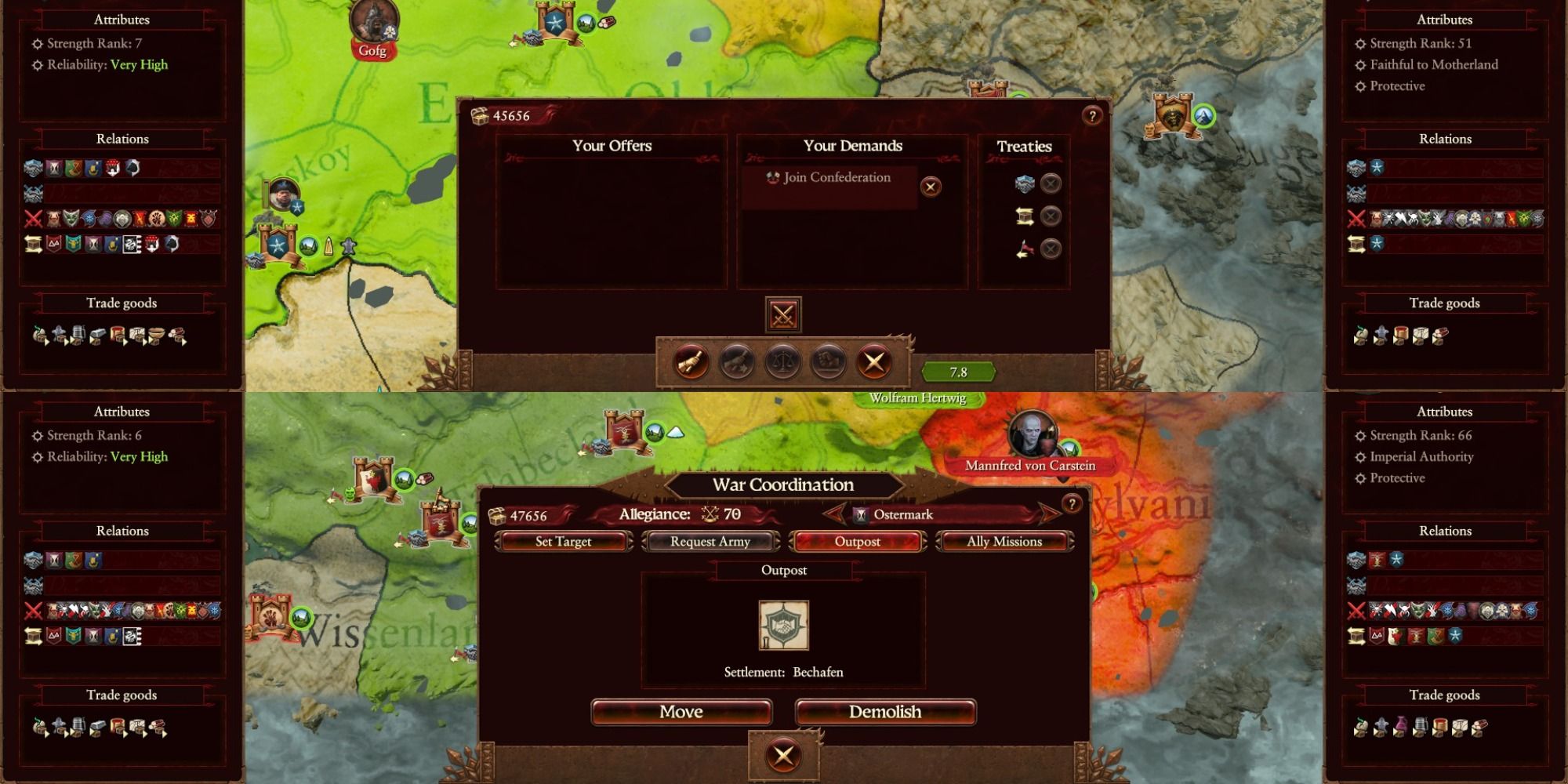 This was inevitable: the excellent diplomacy improvements of Three Kingdoms: Total War have made their way over to the Warhammer franchise. These quality-of-life updates, such as quick trade deals, seeing the expected result of a deal, and automatically adding enough money to ensure your deal is accepted, are all very welcome. Diplomacy certainly requires a lot less clicking now and is more fun to engage with.

There are also surprising new additions, such as the outpost system. You can build outposts in the settlement of an ally, allowing you to recruit some of their basic and mid-tier units. So, as Kislev, you will be able to field Greatswords and Crossbowmen from the Empire, if you so wish. The war coordination system has also been improved, and you can now warn armies that are trespassing in your territory to leave. If they ignore your warning, you can declare war on them without suffering the usual diplomatic repercussions. 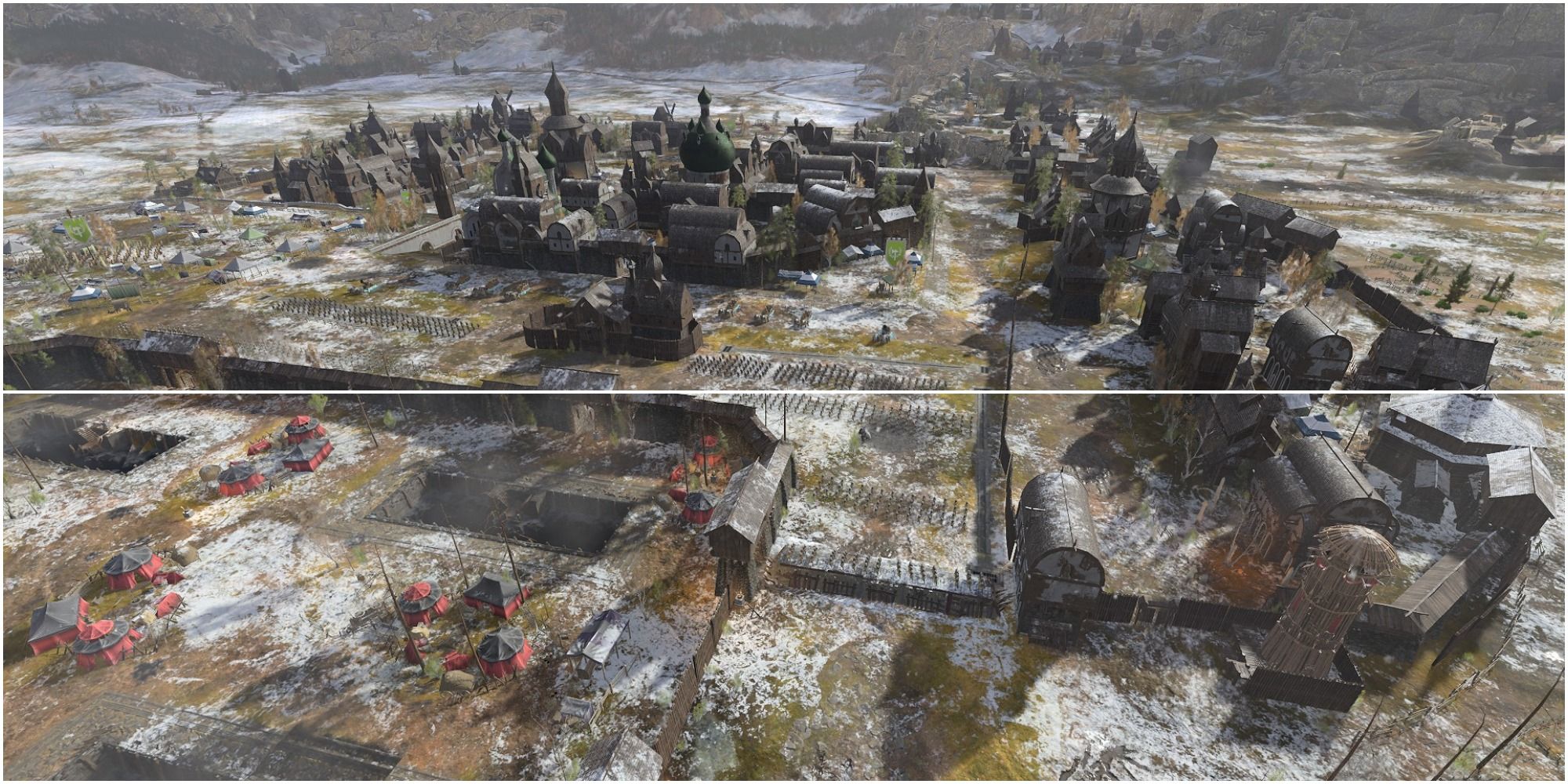 In Warhammer 2, most battles that were fought over a minor settlement would be a land battle. In Warhammer 3, all minor settlements now have a dedicated map, full of chokepoints, alleyways, and vantage points. As the defender, you get a limited number of supplies (the longer you were besieged, the more points you have), that you can use to construct defenses such as blockades or arrow towers.

The map also consists of various capture points that control the arrow towers and give a bonus to your army. So, as the attacker, it is key to capture these control points. You can no longer just rush to the center and need to attack from multiple sides. These new sieges are certainly a lot of fun, the only question is whether the downside is worth it, namely, that field battles are even rarer now.

7 There Are Proper Siege Battles (Almost) 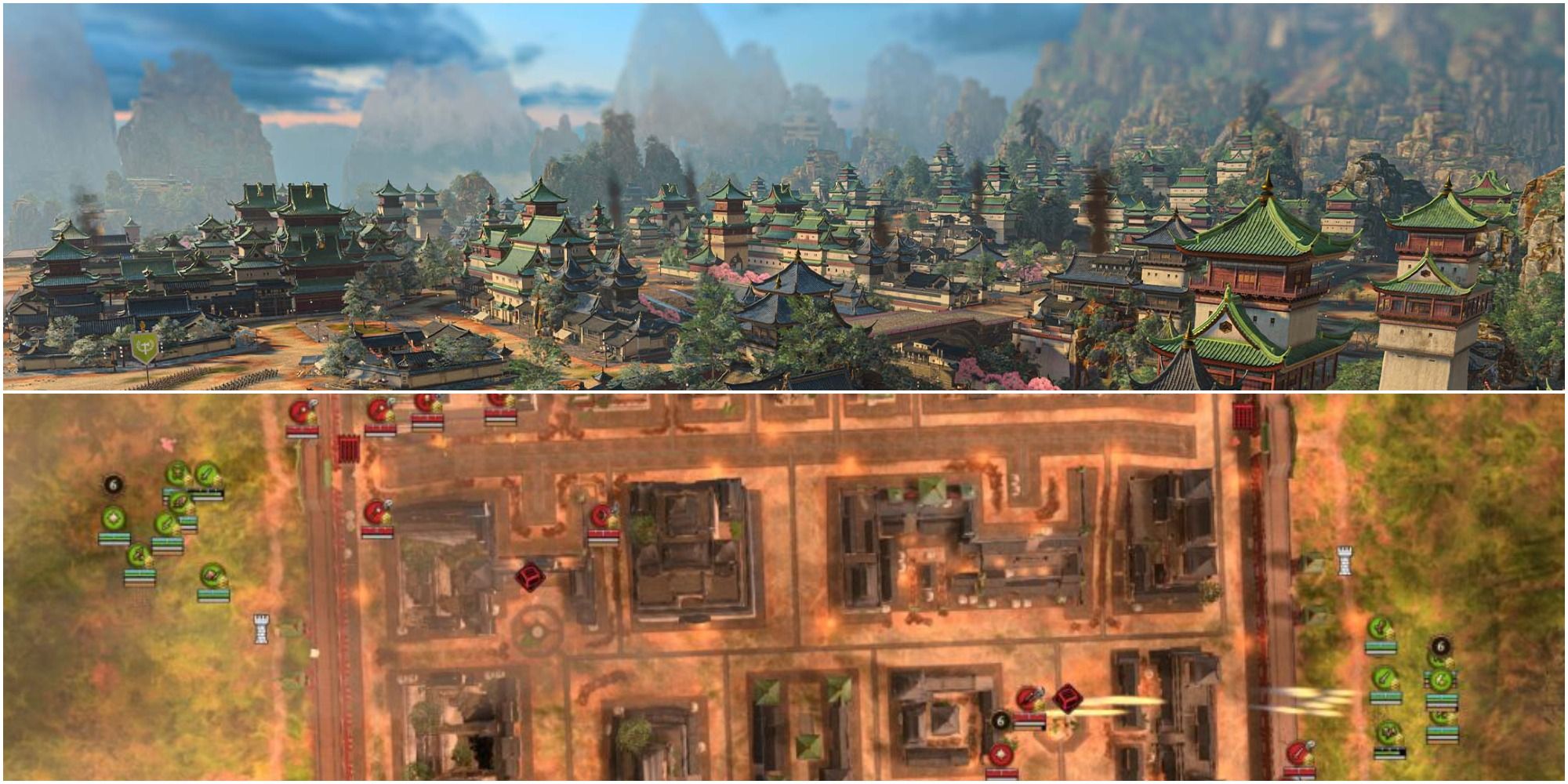 Just like the minor settlements, the sieges were also reworked for the large cities. Arguably, this was the most requested change by the fans of the franchise. While sieges in older Total War games, such as Rome 2: Total War, featured entire cities that you could assault (and defend) from 360 degrees, in Warhammer 1 and 2 this was changed to a more one-dimensional approach.

Fortunately, the 360-degree sieges are back, and there is certainly a lot to like here. Sieges are a lot less static, also thanks in part to the height variations in the maps and the various well-designed chokepoints. This gives you a lot more options, both as an attacker and as a defender. The winner of a siege will not as often be decided at the outer wall.

6 The UI Has Upgrades And Downgrades 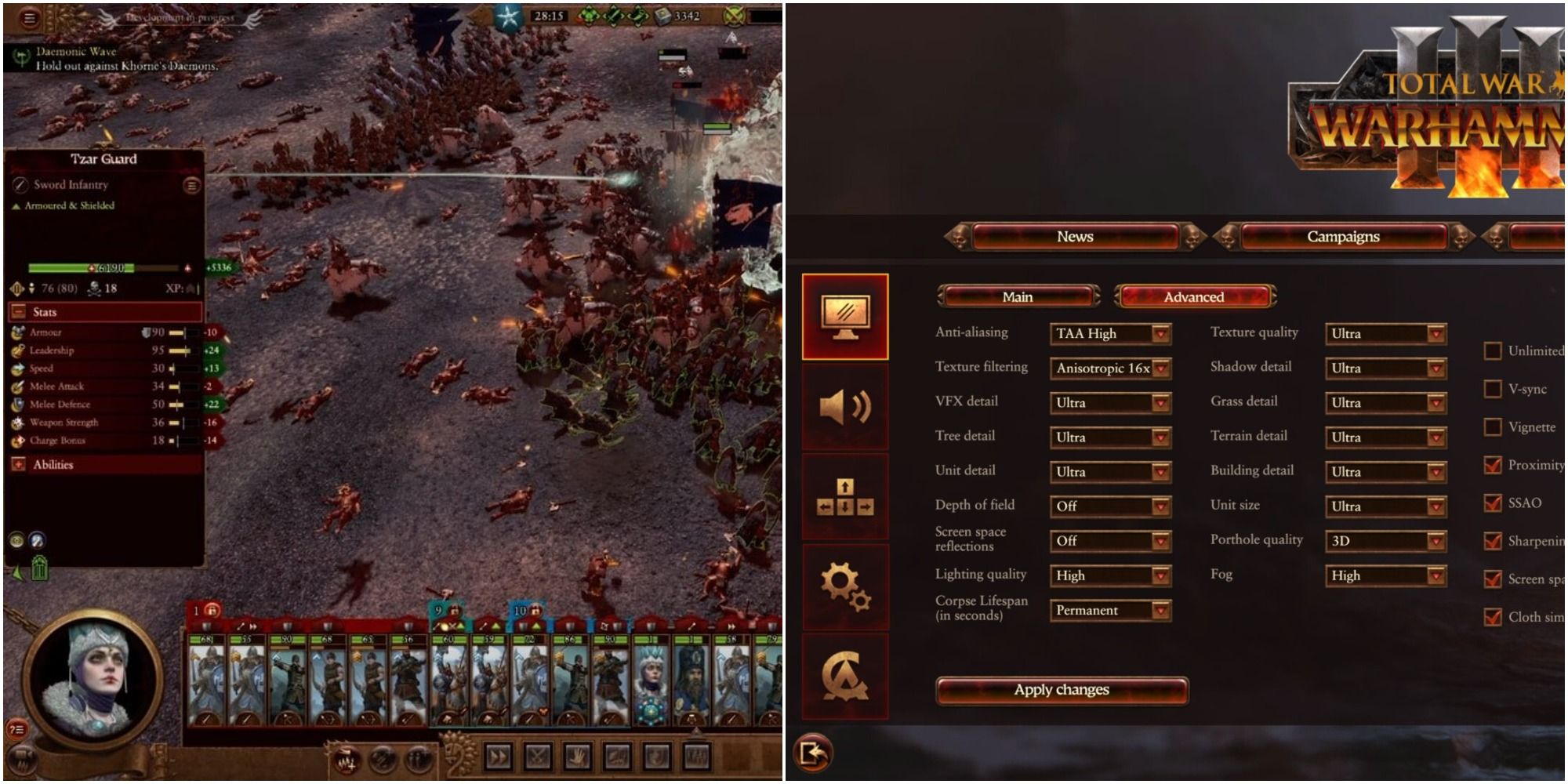 Warhammer 3 features a redesigned user interface. It seems the developers took Khorne's battle cry ("Blood for the Blood God") to heart since the color red dominates every aspect of it. For instance, it can be hard to distinguish whether you are building or dismantling a building in a settlement. In previous games, those icons would be green and red respectively, but now they are all red.

On the other hand, the user interface feels a lot cleaner and is easier to read. Little details like a 'Zzz' text appearing on units that are idle in battle, work incredibly well. A more controversial change is that quests now appear on the bottom right of your screen, where the event messages often block them out of view.

5 There's No Immortal Empires Campaign Yet 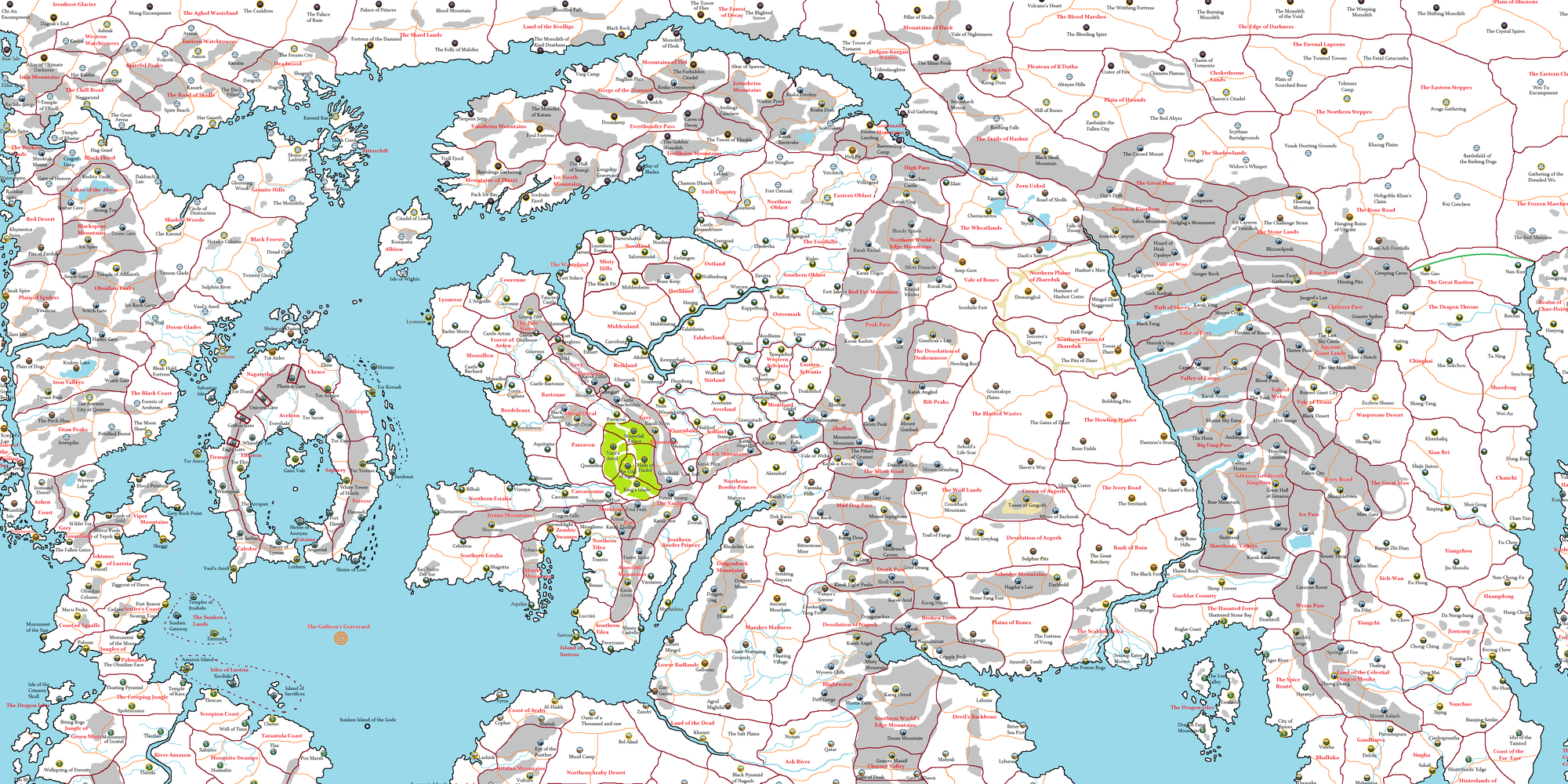 For many players, the main appeal in buying Warhammer 3 is the promise of the (im)mortal empires campaign. This would be a gigantic map, merging the maps of Warhammer 1, 2, and 3 into one. In potential, this could be the most replayable and unforgettable sandbox experiences in a Total War game to date.

So, if you want to have a battle between Grand Cathay and the Tomb Kings, or between Nurgle and Skaven, you will be able to do so. The only caveat is that you need to wait. Warhammer 3 was released without an immortal empires campaign, and it is not clear yet when it will be released, only that it will.

4 General Speeches Are Back 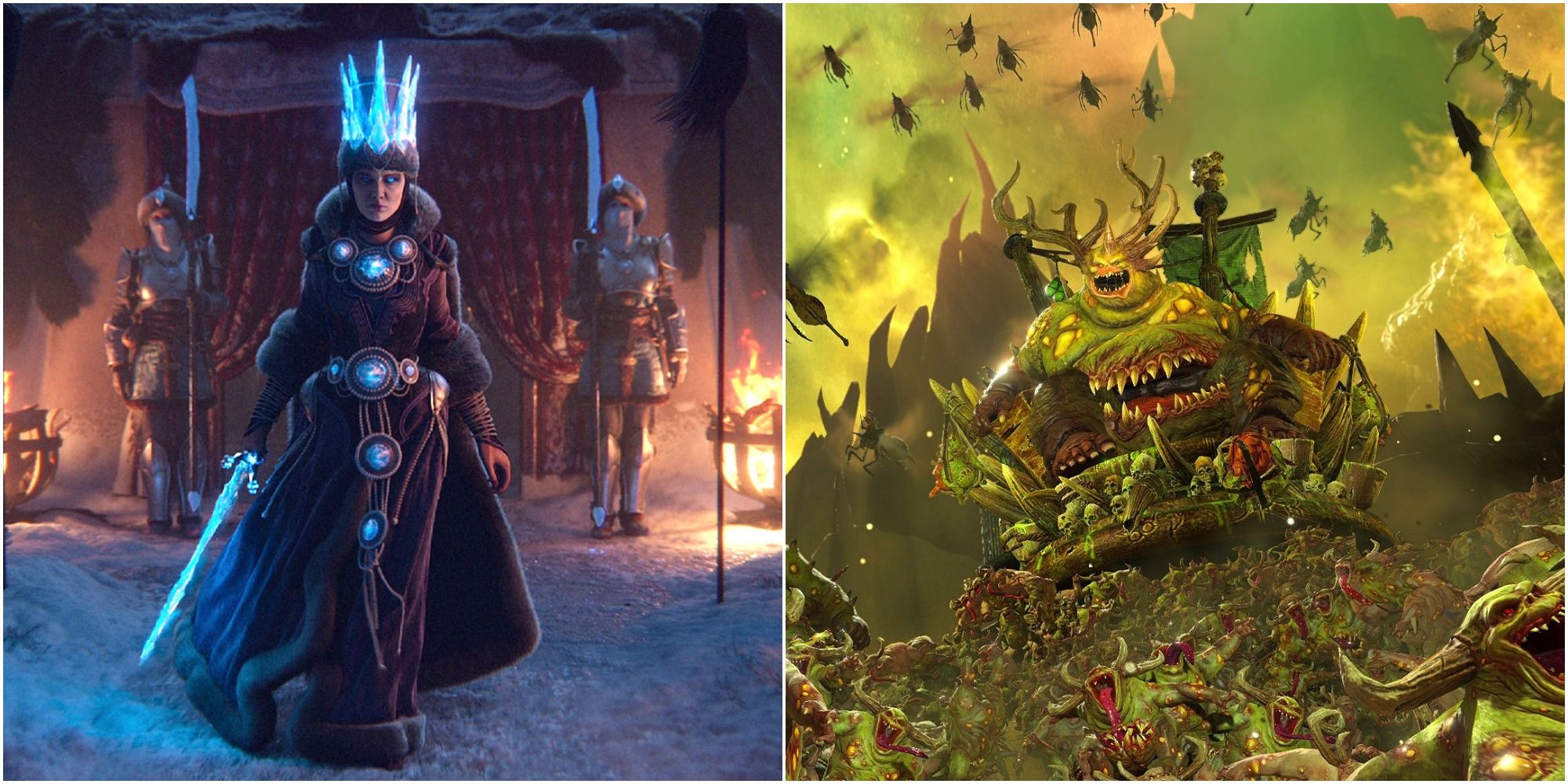 Another gameplay element that returns from older Total War games, and feels almost retro at this point, are general speeches. If you zoom in on your legendary lord at the start of the battle, you will hear your lord give a speech to your troops. Of course, the contents of that speech depend highly on which faction you are playing as.

Speaking of battles, another great new change is how the reinforcement system works. Finally, you can alter the position on the map where your reinforcements will arrive. However, the more you move them, the longer it will take for them to arrive. Still, the option is very neat and gives you more tactical options.

3 There's A Flying Toggle And Formations 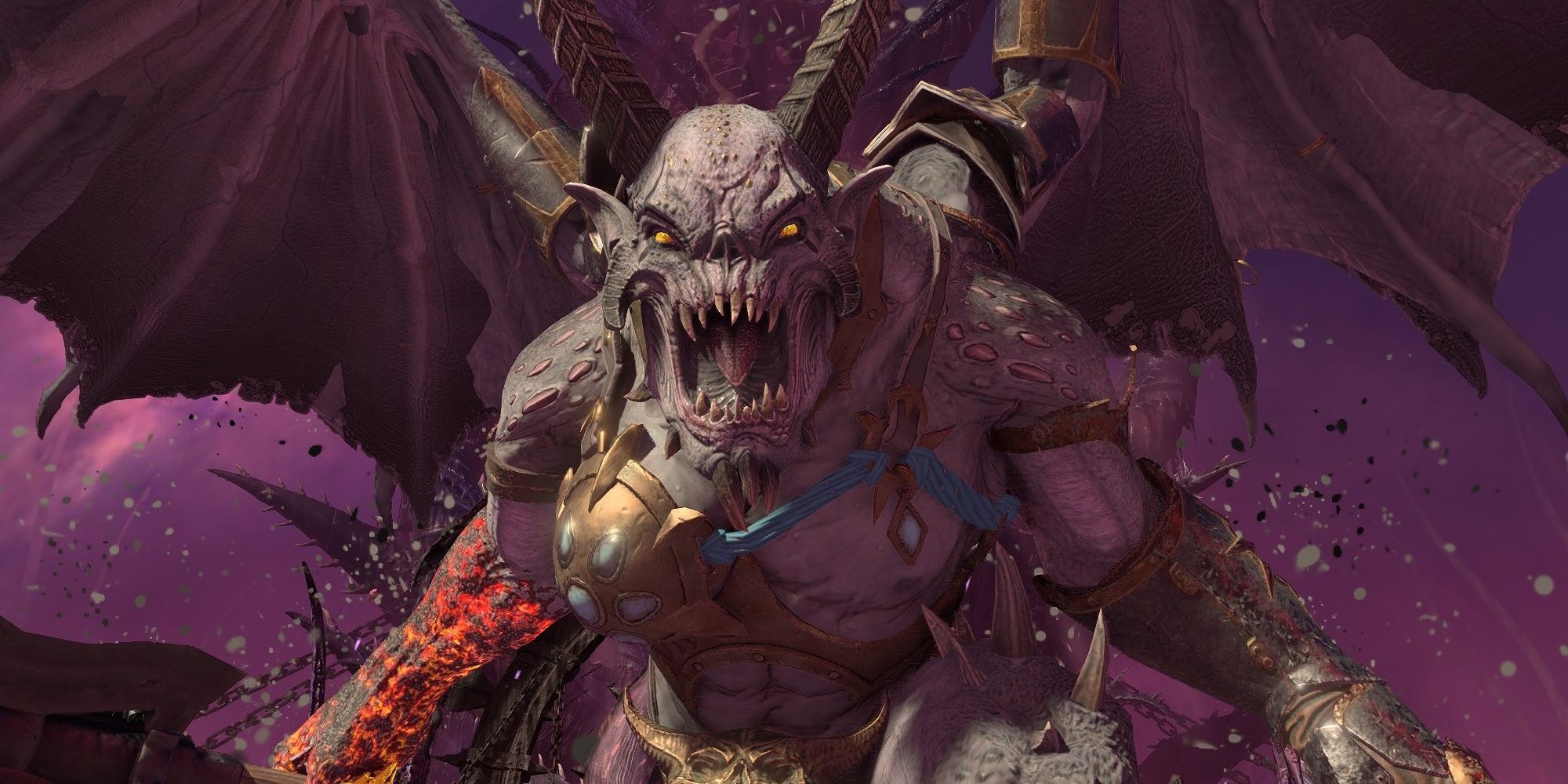 In Warhammer 2, your flying units would be forever stuck to the skies. Now, there is a magic button that lets them land on the ground. It does not apply to every flying unit, but it does to most. This can be very useful in siege battles, but also if you are facing a lot of missile units like Thunderers and prefer to fight on the ground.

Another useful new addition is that formations at the end of the deployment phase will now be remembered for the next battle. So, you no longer need to rearrange your army every single time. 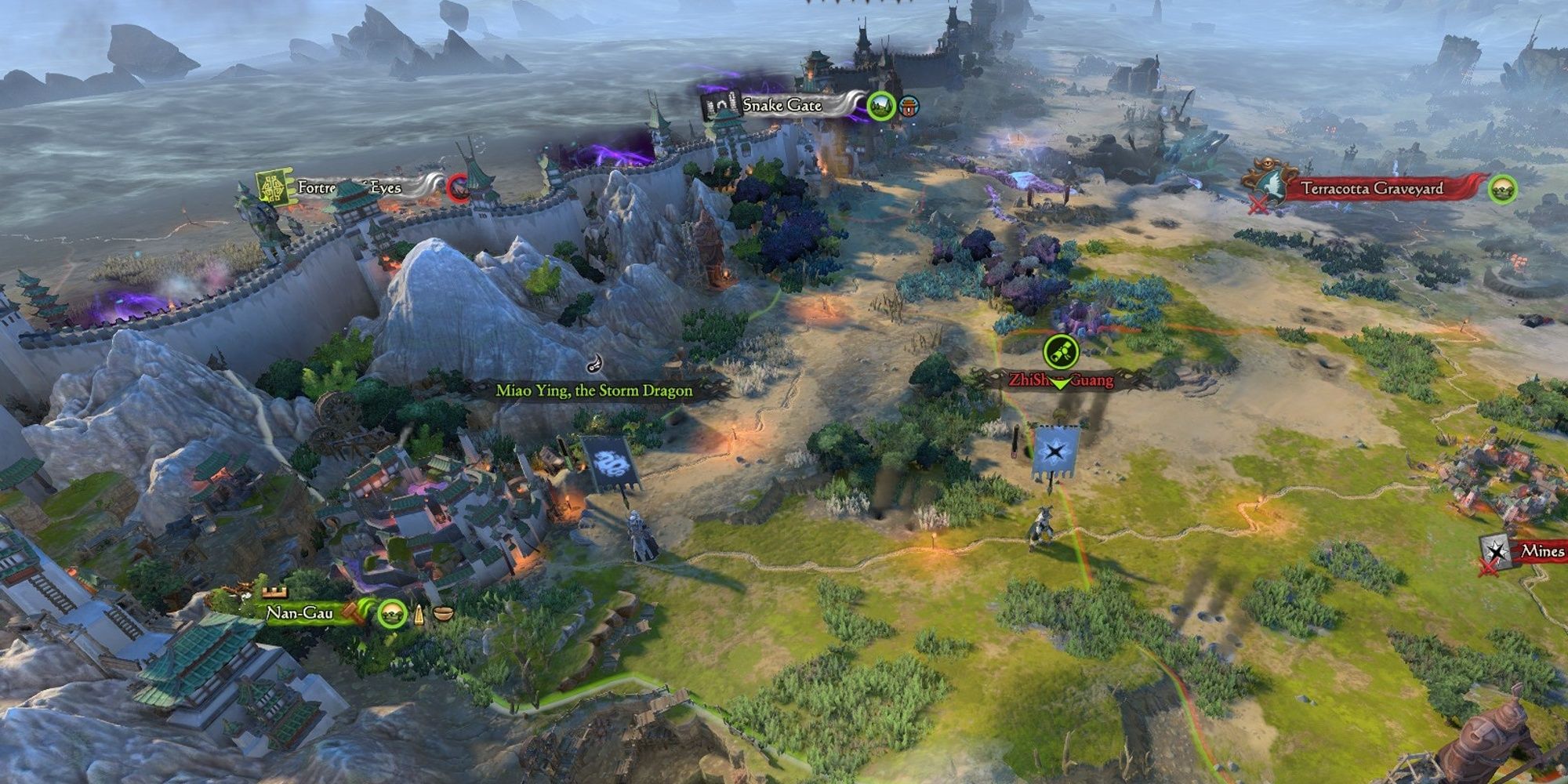 Possibly the biggest surprise is the reworked co-op mode. It is now possible to play Warhammer 3 not just with four but with eight players in co-operative mode. Also, for the first time in a Total War game, there are simultaneous rounds. This means that you do not need to wait for your teammate to finish their round before you can play.

This makes co-op much less of a waiting game and much more of a fun experience. Co-op mode also seems to be stable, with little to no desyncing taking place, which should delight Warhammer 2 fans in particular.

1 The Skill Tree Has Been Reworked 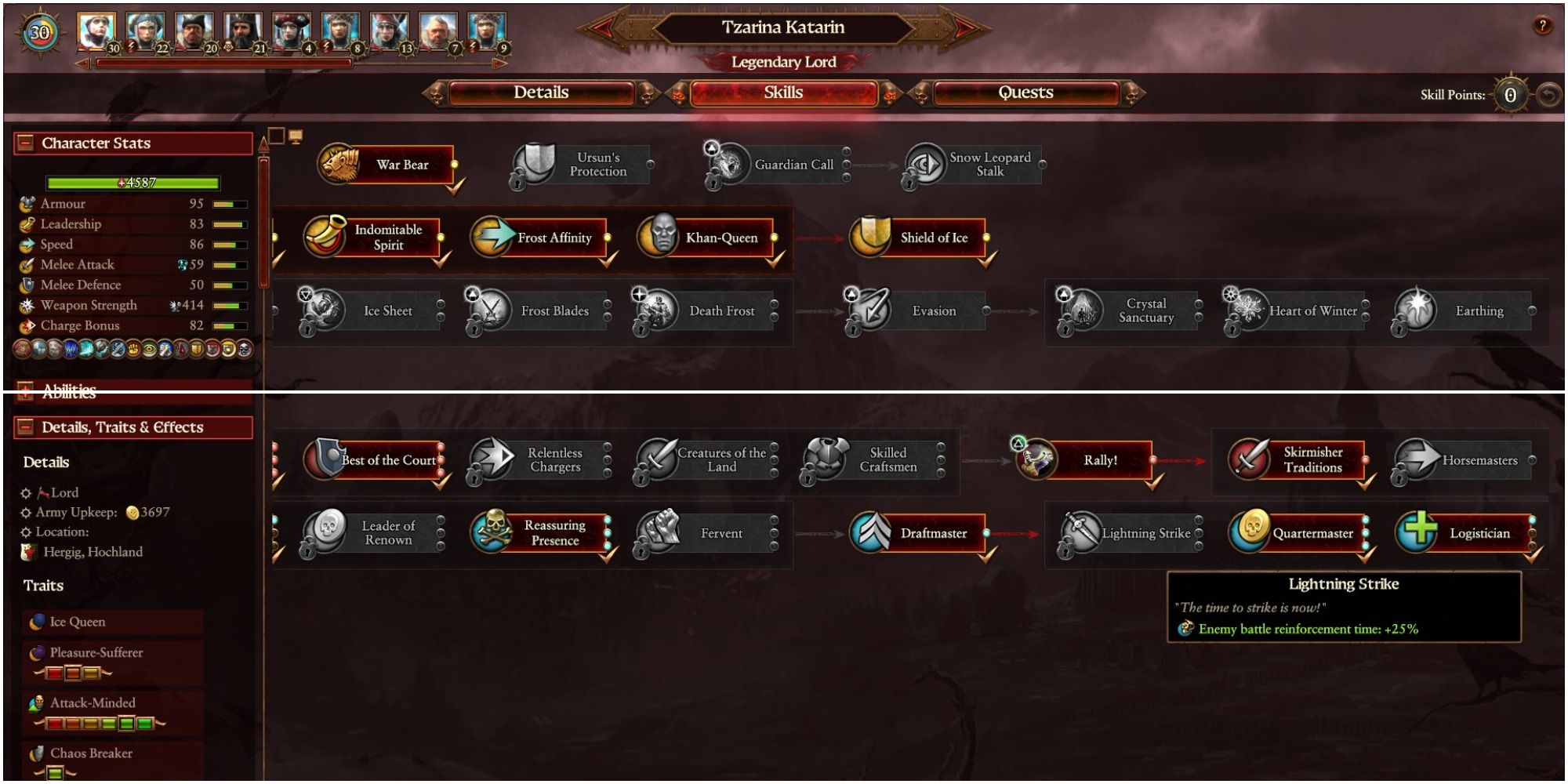 The skill trees of lords and heroes look a little different in Warhammer 3. The change to the user interface where everything is red also applies here. Previously, skill trees were easily readable, since there was a blue, yellow, and red line. Now it is all red. This does make it a bit easier though to advise someone where to spend their points (eg, put it all on the red line).