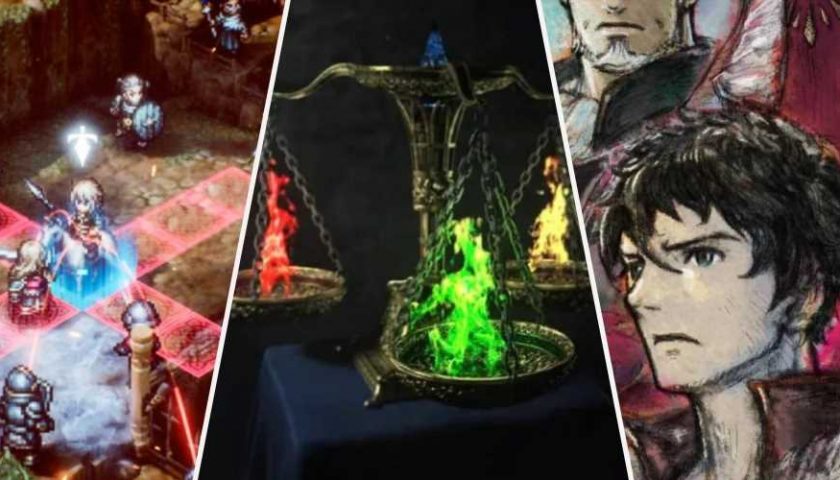 There are only so many battles in Triangle Strategy. Even if you're in the market to play every route, and you're into the idea of tackling every mental mock battle several times over, there will likely come a point when you will want to have solidified your preferred units so that you can focus on their growth first and foremost. Weapon upgrades are hardly cheap, after all, and level-grinding takes some effort on the player's part.

As impressive as it is that Square Enix has managed to create over 30 unique units in a deep and rewardingly complex strategy RPG, it's all the more impressive still that none can be considered genuinely bad. Yet there must exist some semblance of a pecking order, and players who seek to maximize their training efforts will want to factor that into their deployment choices. So without further ado, behold: the best characters in Triangle Strategy (and where to find them). 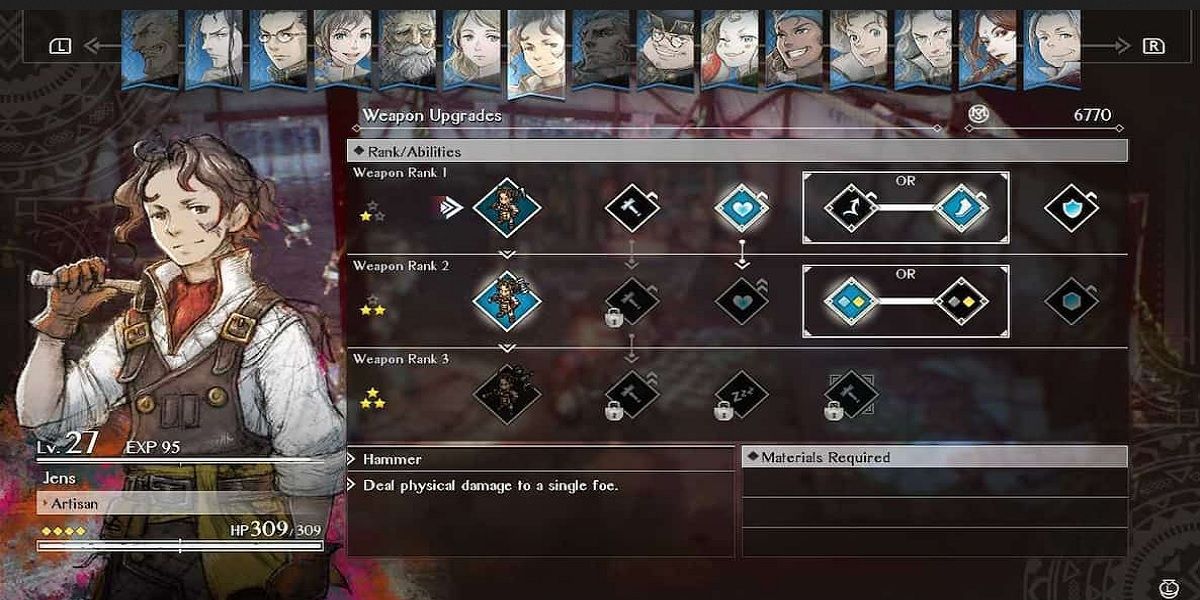 How to Obtain: Joins via Character Stories after the player achieves 450 or higher Morality score.

Jens is the definition of the word "situational." He's so situational, in fact, that we almost didn't include him. But the fact is, he's downright indispensable whenever Triangle Strategy tosses a map with major elevation differences at you. Jens' ability to quickly craft ladders in the midst of battle can completely break the intended challenge of being besieged by archers and mages from on high. His Fortnite-like object-building swiftness lets your heavy hitters quickly reach their biggest threats, making short work of some of the toughest situations Norzelia has to offer. 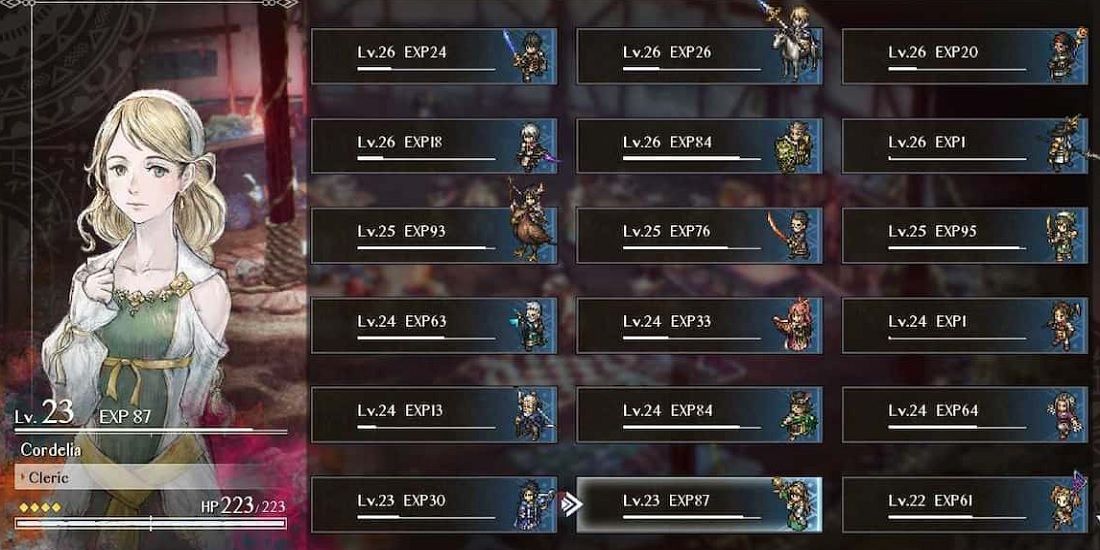 How to Obtain: Only available if the player elects to "remain in the Crown City" during Chapter 15, which prevents the acquisition of other potential units.

She might not be the best healer in the game, but Cordelia makes up for it via a mixture of range and high potency. She can keep an ally's health regenerating for several turns at a time, spread a fairly powerful multitarget healing spell across several tiles simultaneously, and even sacrifice half her health when the going gets rough to restore an ally's. Cordelia's Healing Hand passive also sprinkles on some extra HP per turn for units who just happen to be hanging around nearby. 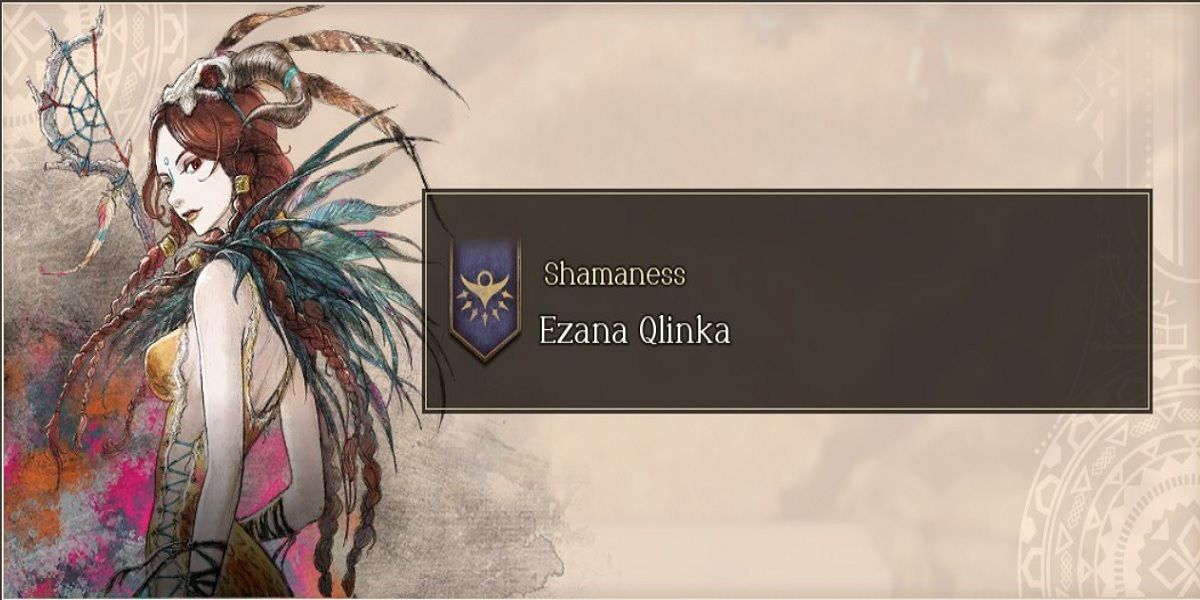 How to Obtain: Joins via Character Stories after the player achieves 500 or more Liberty as well as 400 or more Utility.

Triangle Strategy is a political thriller through and through, with magic mostly serving as a garnish rather than a main event. No one seems to have informed Ezana of that fact — this traveling shamaness alters the very weather of the world to ease the suffering of Norzelia's people, stunning the rest of the cast with her high-fantasy capabilities.

These powers are just as handy in battle as in lore; she can summon a tempest to tilt multiple enemies in a separate direction for easy critical hits, summon a rainstorm to enhance various elemental attacks, and call forth bolts of lightning that can quickly spread to paralyze entire legions if well-timed. 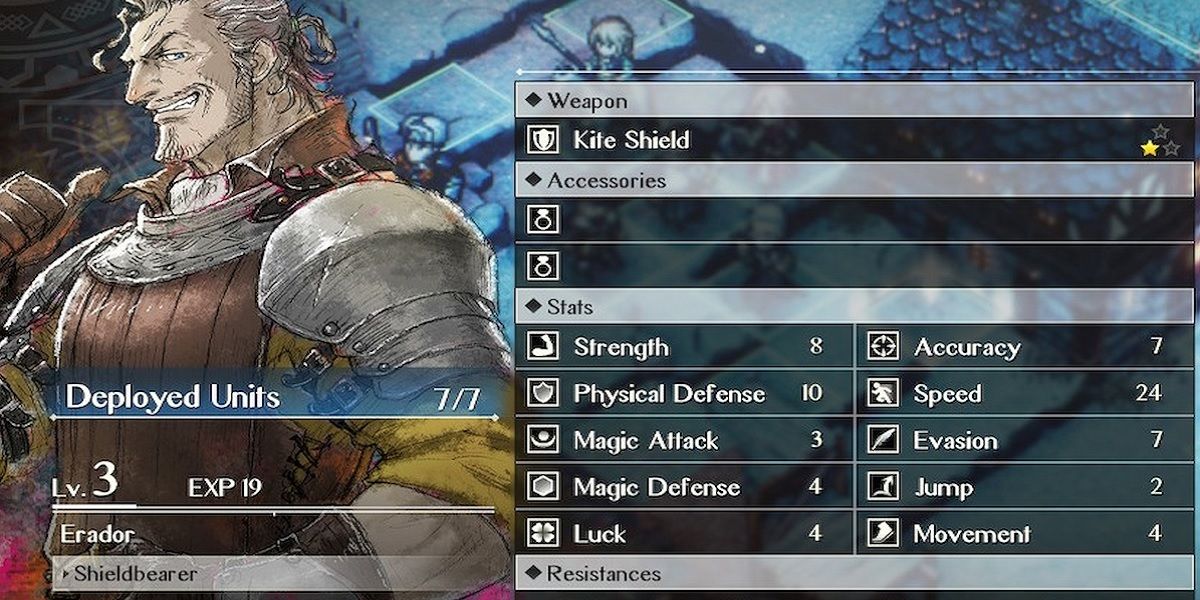 How to Obtain: Reach Chapter Two in the main story.

Erador joins the party almost immediately, and the party is all the safer for it. In tabletop gaming, there's a term for brutish tanks like him: meat shield. Something tells us Erador would wear the term with pride if he knew of it. His entire kit revolves around the concept of soaking damage for his fellows. He even has an MMO-style threat-grabbing tool with Provoke, which draws the ire of nearby foes so that they'll lay off your squishier units in favor of stabbing the brick wall that is he. 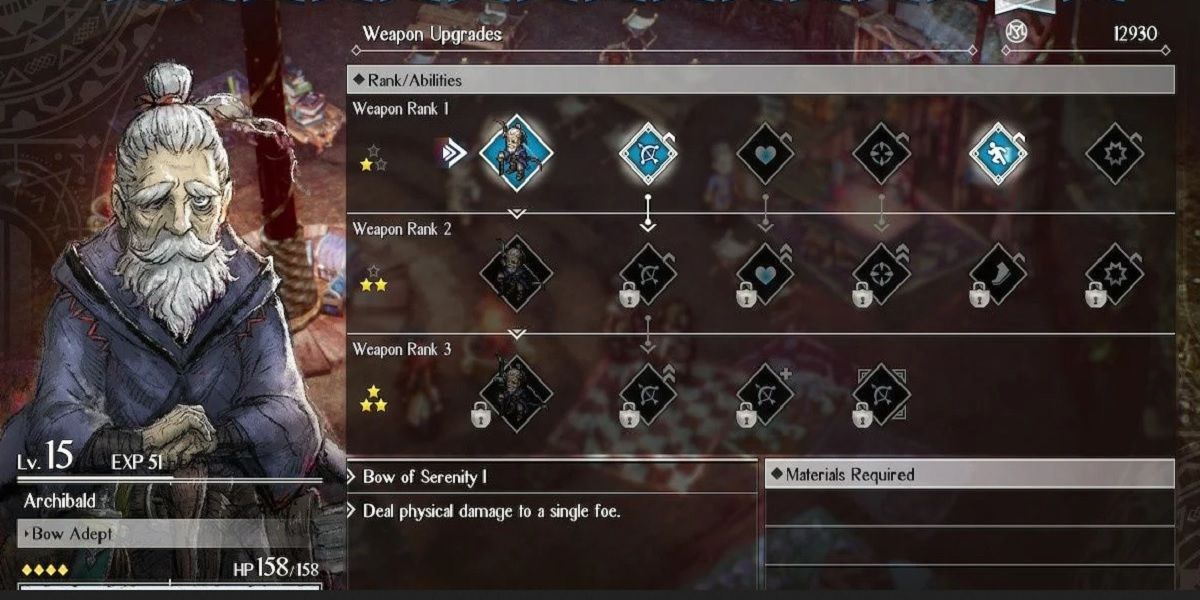 How to Obtain: Joins via Character Stories after the player achieves 500 or more Utility as well as 400 or more Morality.

Archibald was the sole survivor of a battle which took place decades before the events of the game, and even back then, this old warhorse's beard was fully gray. Age doesn't appear to be an obstacle for the man — save, that is, for a fairly low speed stat — and he's the best archer in Triangle Strategy by a fair margin.

That's not to say there's never a place in your party for a flier like Hughette, but one look at the damage, not to mention the outrageous range, that Archibald can deliver, and it's difficult to imagine battling in the game's larger maps without his zeal. 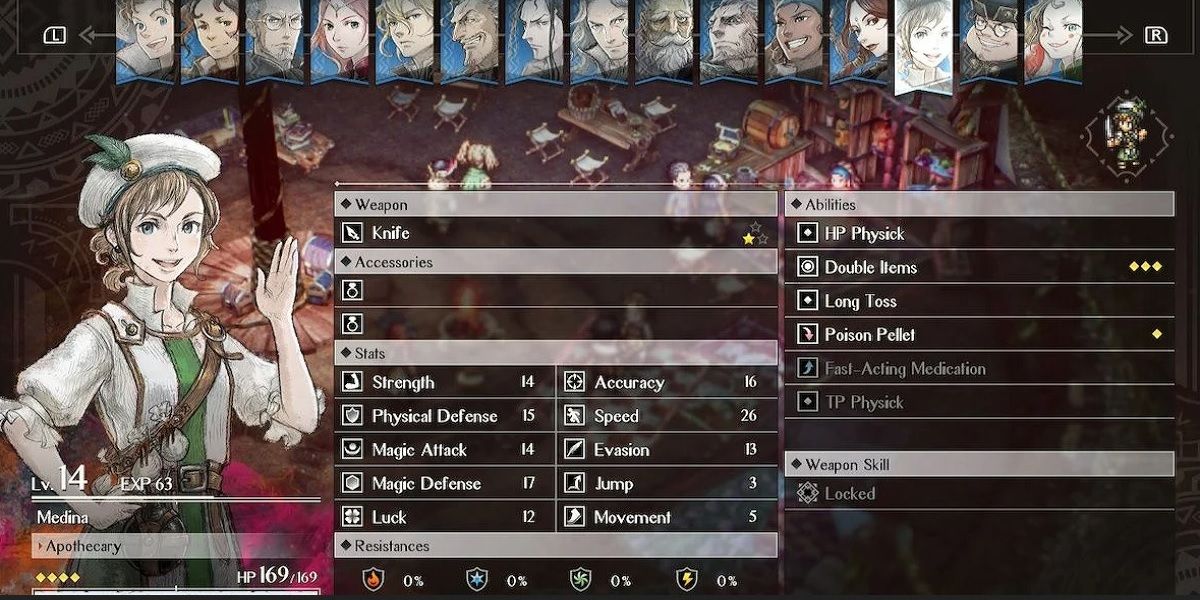 How to Obtain: Joins via Character Stories after the player achieves 500 or more Morality as well as 400 or more Liberty.

Geela's a great all-rounder, Hossabara's range can be a lifesaver, and Cordelia's multiheals are spectacular, but Medina is our pick for the best healer in the realm. As an apothecary by trade, Medina relies upon manmade items for her profession rather than the dazzling magic spells of her peers. What sets her apart and makes her a master is her ability to use two items at once in a single turn. On paper, it might not sound like much; in practice, however, and when combined with a passive skill that permits stronger-than-average results from health recovery items? Suddenly, Medina amazes. 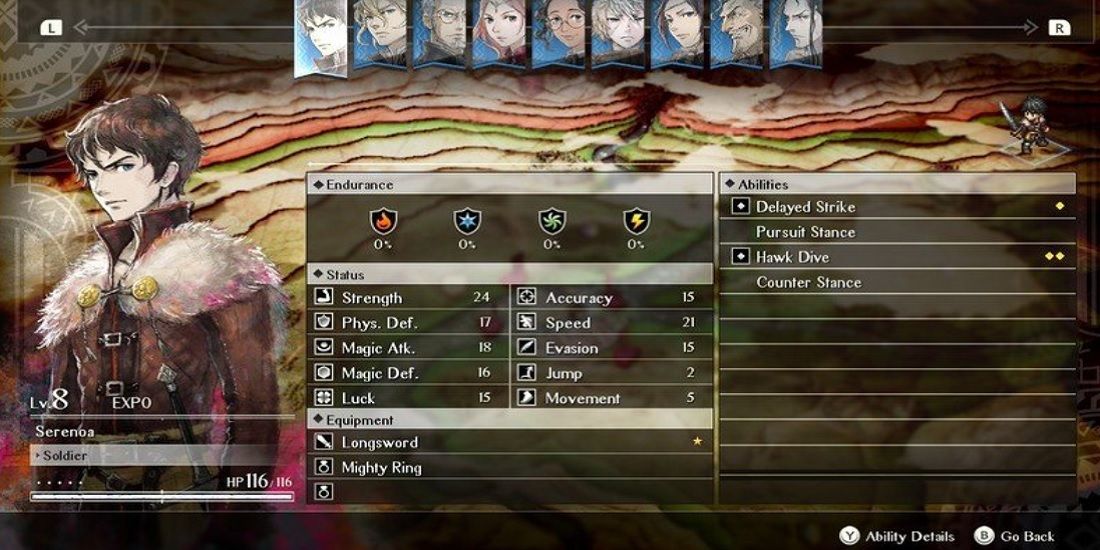 How to Obtain: Available immediately.

It would be a shame if Triangle Strategy's leading protagonist was middling in combat, especially since the vast majority of mandatory battles require him to join the field. Thankfully, Serenoa is one of the best units House Wolffort could ask for. By blending appreciably high strength and swiftness, several great offensive abilities such as the mid-range Hawk Dive and area-of-effect Sweeping Slash, and the ever-useful Counter Stance, Serenoa is a fierce fighter. Have him lead the charge, but take care to keep his health topped off — your enemies will no doubt want him done and dusted before he can obliterate their lines. 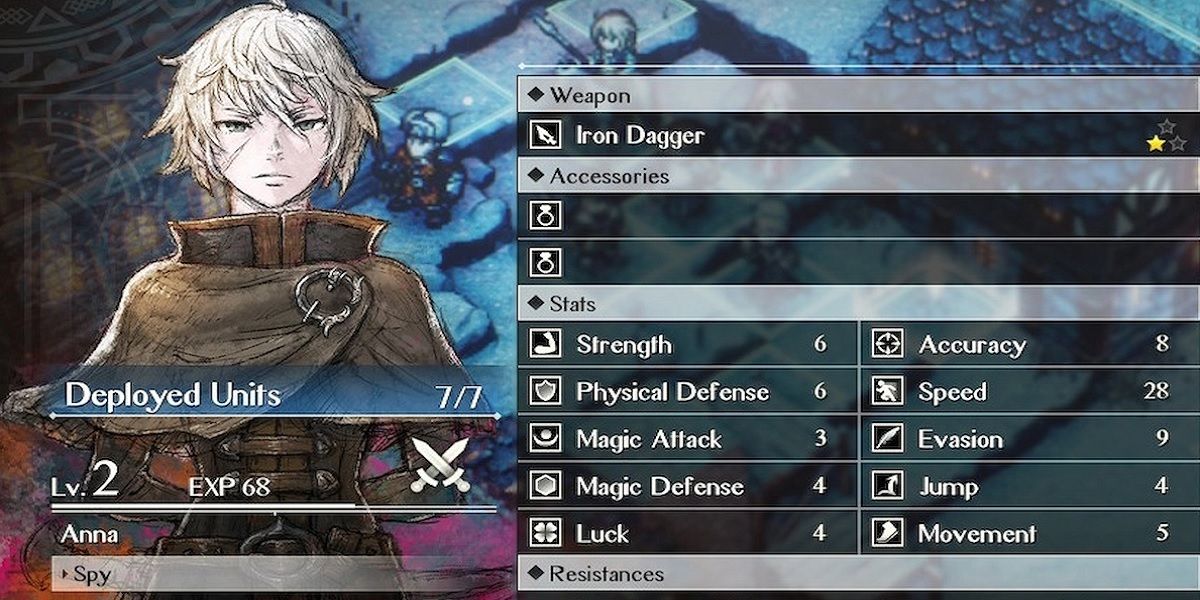 How to Obtain: Reach Chapter Two in the main story.

Anna is a speed demon. In the story, she serves as House Wolffort's shadowy spy, and the gameplay designers employ that to great effect in combat. Her ability to act twice per turn will feel like a godsend in the early hours, and it will continue to serve you well all the way to the end.

Though she's hardly built like the truck that is Erador, Anna can use an action to hide herself from the enemy's sight and the effect is only broken if they stop directly in front of her. Whether she's tossing poisoned knives, setting foes to slumber, or simply infiltrating the enemy ranks to eviscerate them from behind, Anna is quite possibly the best starting unit in the game. 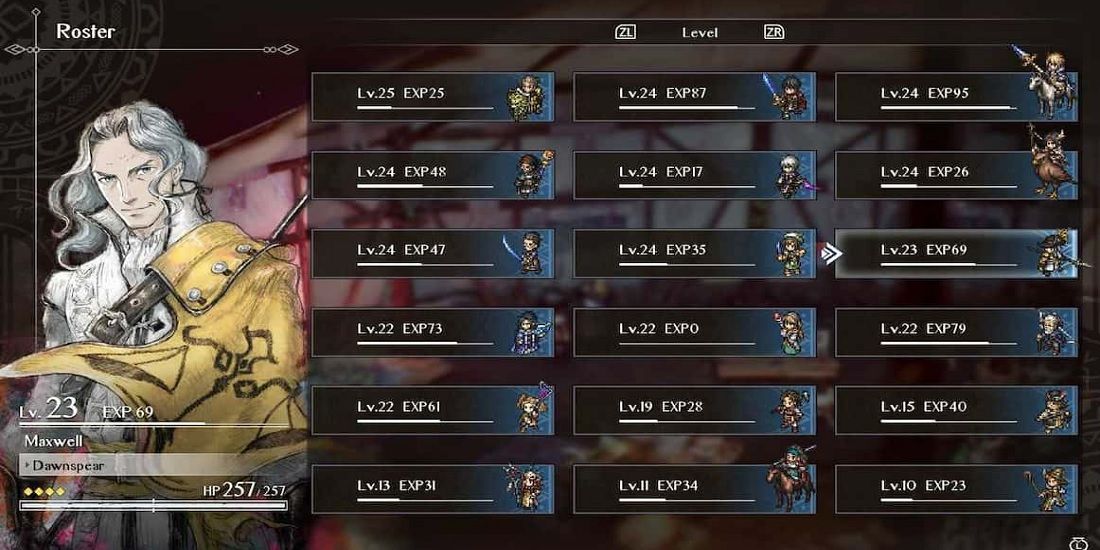 How to Obtain: Joins via Character Stories at any point from Chapter 15 onward after the player achieves 1,050 or more Morality and 750 or more Liberty.

The opening chapters lay it on pretty thickly that Ser Maxwell the Dawnspear is one of the most powerful warriors ever to have lived. Many hours later, during the late-game phase, players who have racked up a substantial amount of Morality score (and a fairly high Liberty score as well) get to verify the facts firsthand.

Maxwell can sweep the battlefield with mighty lancer attacks like Lance Hurl and Triple Thrust, mimic Anna's two-action passive with Traverse, copy Roland's Run Through even without a horse — the man's a machine. And to top it all off, in a neat of plot-winking a fallen Maxwell will automatically revive once per fight once he's reached his Elite class. 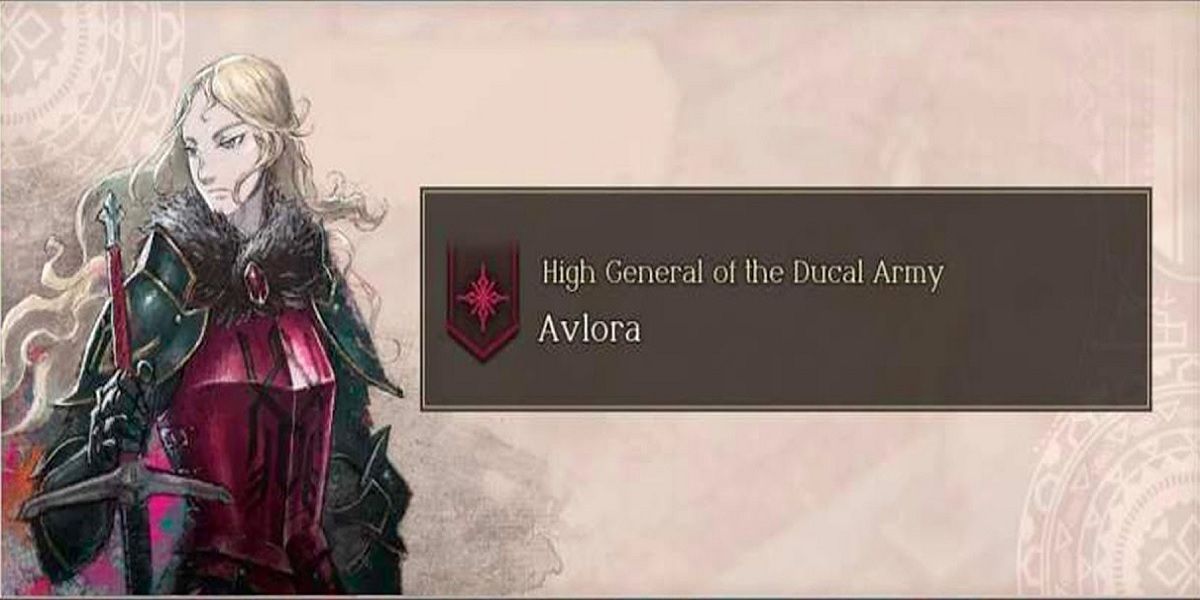 How to Obtain: Joins in Chapter 17, but only if the player meets every condition to pursue the Golden Route.

The single most powerful character in Triangle Strategy fittingly requires far and away the most precision playing in order to unlock. As our guide details, several story decisions must be made over the course of the campaign. Falter in any regard, and the indomitable General Avlora will never join House Wolffort's ranks.

Not only are Avlora's attacks among the deadliest around, but her stats spike as her HP drops, making the Dark General an increasingly undefeatable opponent on the off chance multiple foes attempt to gang up to take her down. Getting into the nitty-gritty details on this titan of the battlefield's particular abilities isn't really necessary when her prowess can be summed up as absolute.