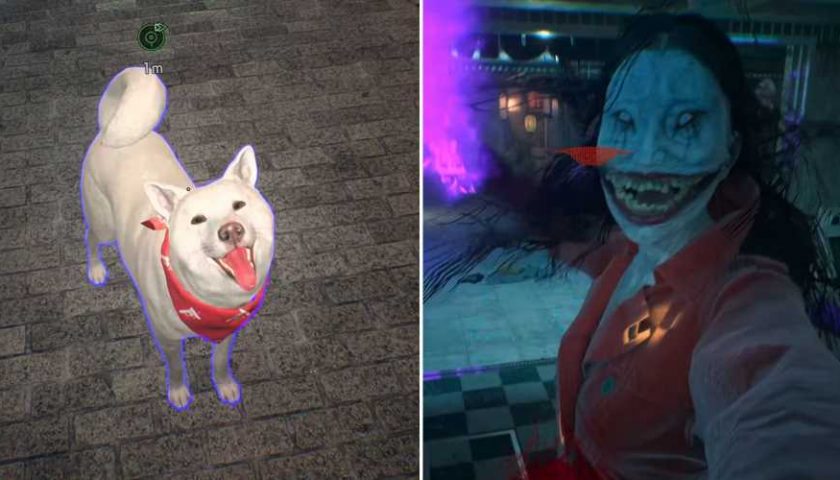 Ghouls and all manner of ghastly foes are present over the entirety of Ghostwire Tokyo’s story, with bosses where you fight Ko-omote, Okina, and the schemer behind everything; Hannya. However, even with all of these fights that travel straight through to horror territory, you’ll never quite know the excellence of character design in Ghostwire Tokyo without playing some of its best side quests.

Side quests vary from short three-minute fights where Akito and KK free the souls of spirits to tasks offering much more than that. Additional areas and characters that appear in quests like Haunting Visions and The Hoarder’s House, who you wouldn’t meet without beginning these quests. Some of Ghostwire Tokyo's best moments are in these missions, with some even teetering on being pure bizarre. 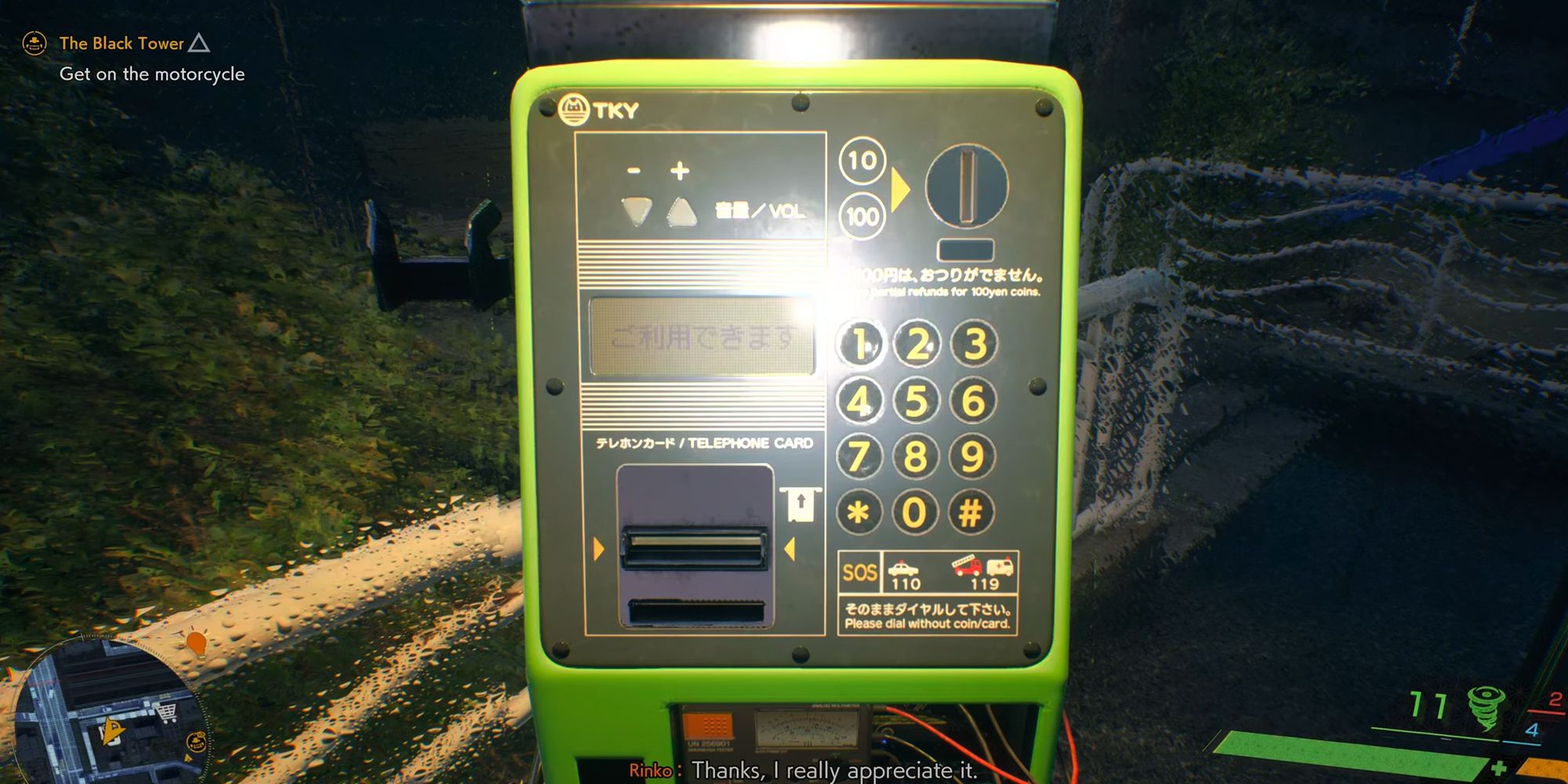 After The End is split into three phases, wherein each step, you and KK must follow the psychic trail of a spirit named Erika. Follow Erika through all the phases, and in the third part, you’ll help reconnect Rinko and Erika, who are mother and daughter. The two needed closure to pass to the other side.

After The End has a few recordings to listen to and some collectibles to pick up that help build upon the world. You'll also obtain the Taiko Drummer outfit. 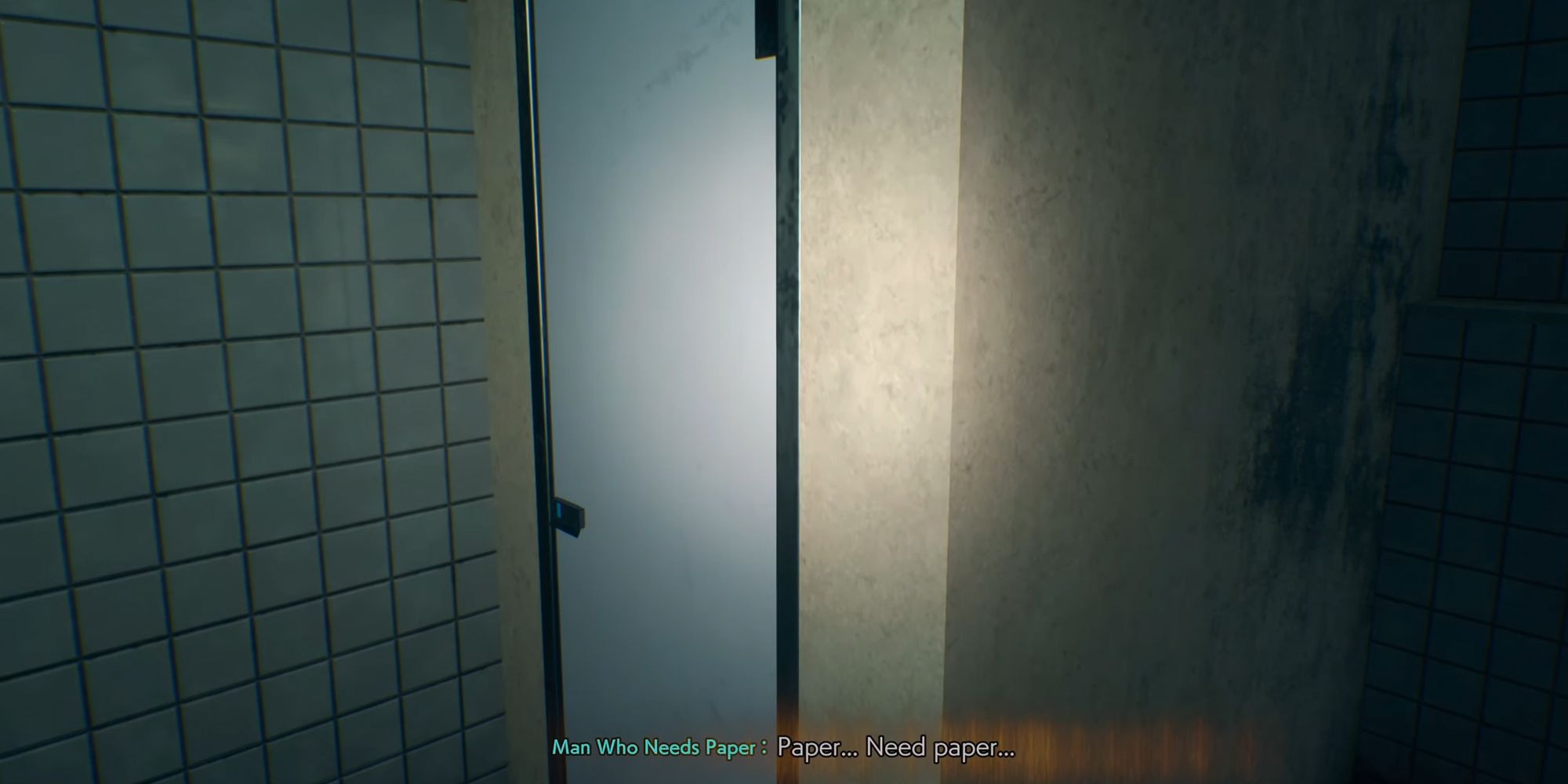 Dire Straits is a strange mission, mainly because the only thing you have to do is bring two rolls of toilet paper to a struggling spirit using the restroom. Thankfully you don’t have to enter the stall and find out what the issue is. You only need to bring the rolls, so the spirit can do their business and then pass on to the afterlife.

The mission takes less than five minutes to finish rewarding you with a surprisingly high amount of money for the little effort given. 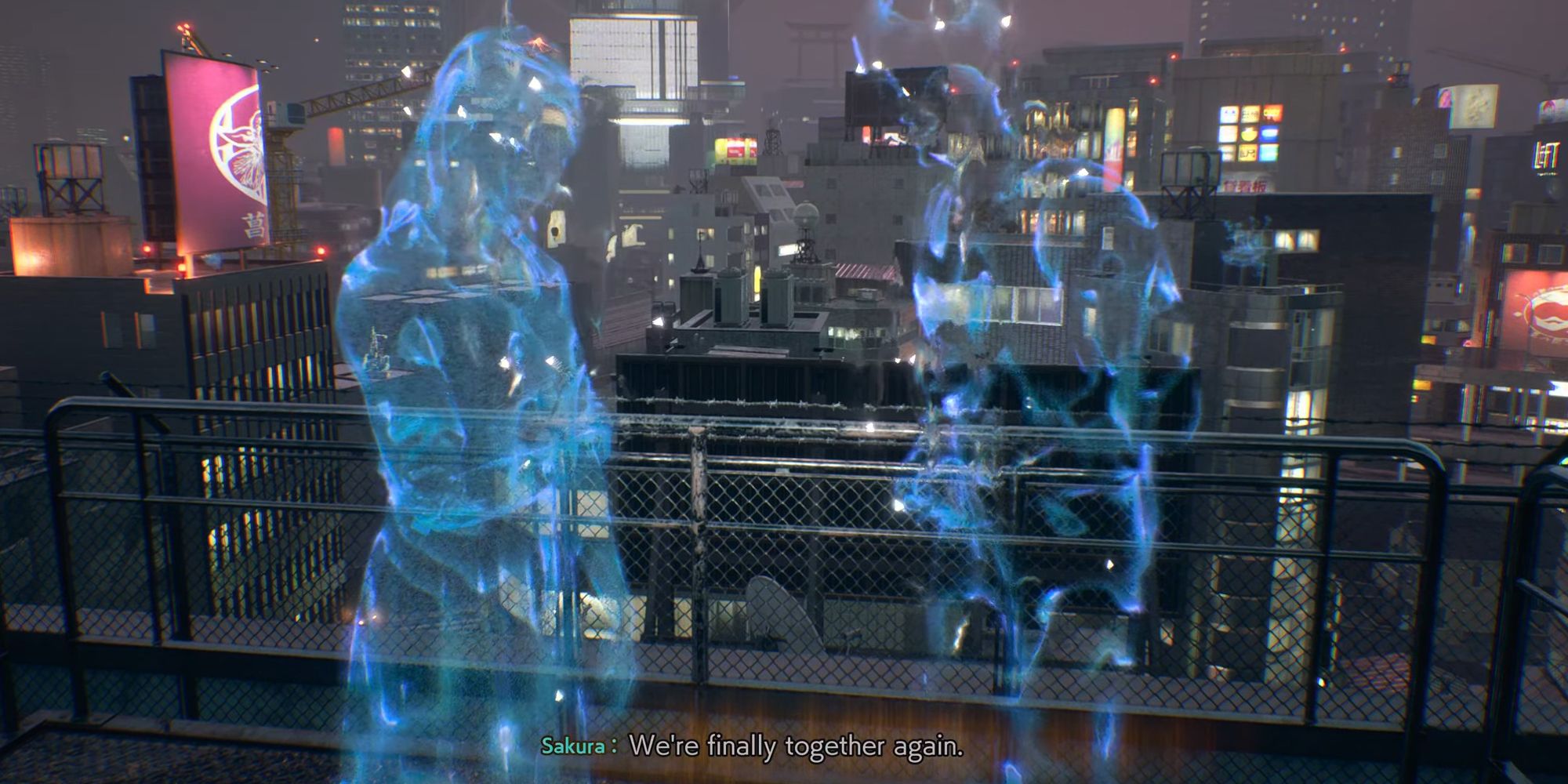 Nesting Evil begins when the spirit of a woman opens up about awaiting her boyfriend's return, to which you will then enter a nearby building to find the boyfriend. Inside you'll discover the dark past of suicides that happened in the building. Make your way to the top, and you'll find the Specter behind the curse causing these suicides.

All you have to do from here is defeat the enemies coming your way and return to the woman to see she has now been reunited with her boyfriend and the two now feel they can pass on to the afterlife. 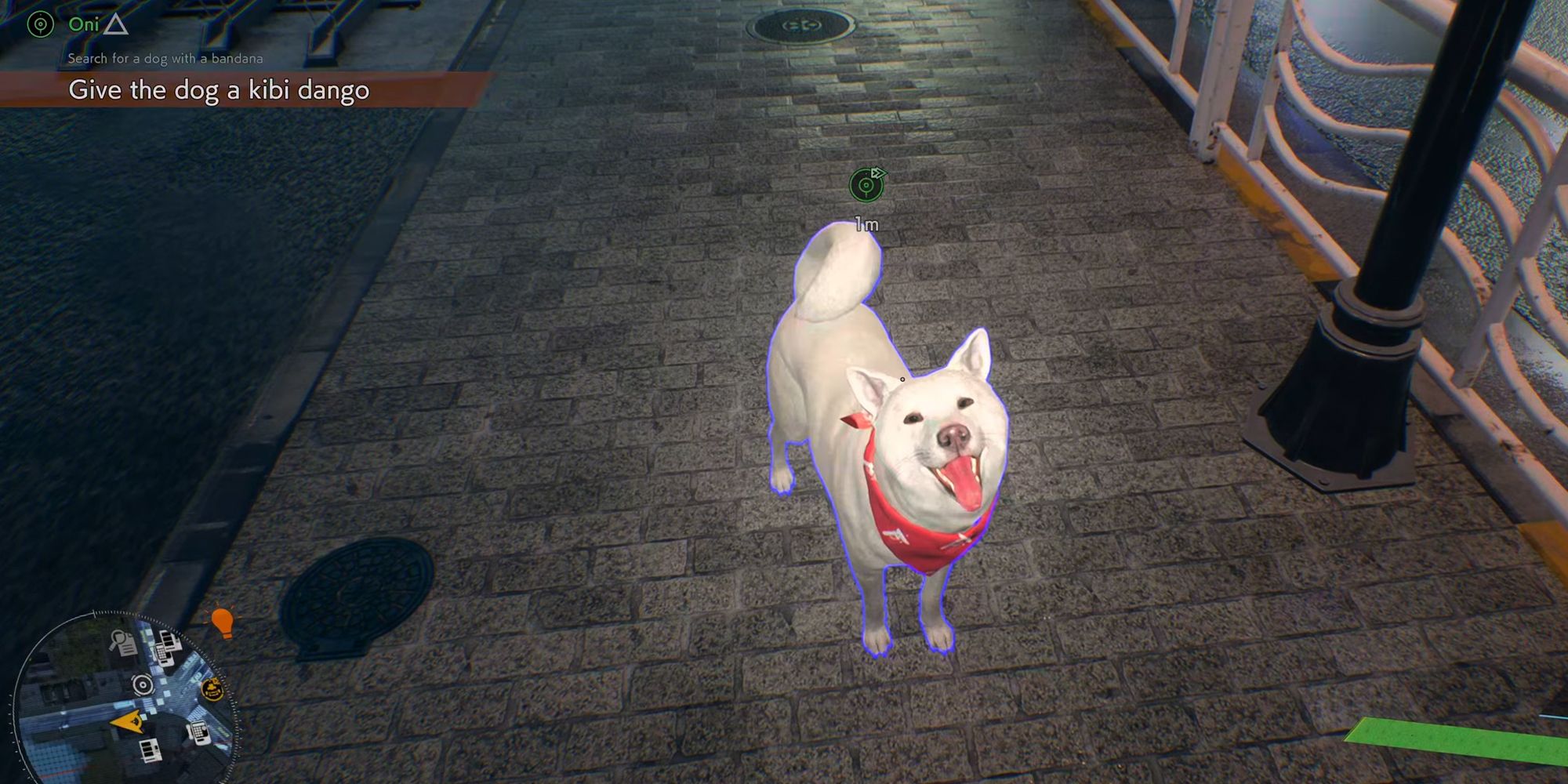 Dog. There probably needs to be more here describing what the Oni mission entails, but the main thing you need to know is that there's a dog. And you protect this dog, a Shiba Inu wearing a red bandana, when they take you to the location of the Oni. But, unfortunately, before the Shiba Inu can lead you to the Oni, you're ambushed by Wanderers, who you'll have to take out to ensure the safety of such a good boy.

These enemies won't prove much of a challenge, and by completing the quest, you'll earn a few Meikas. Also, there is a dog. 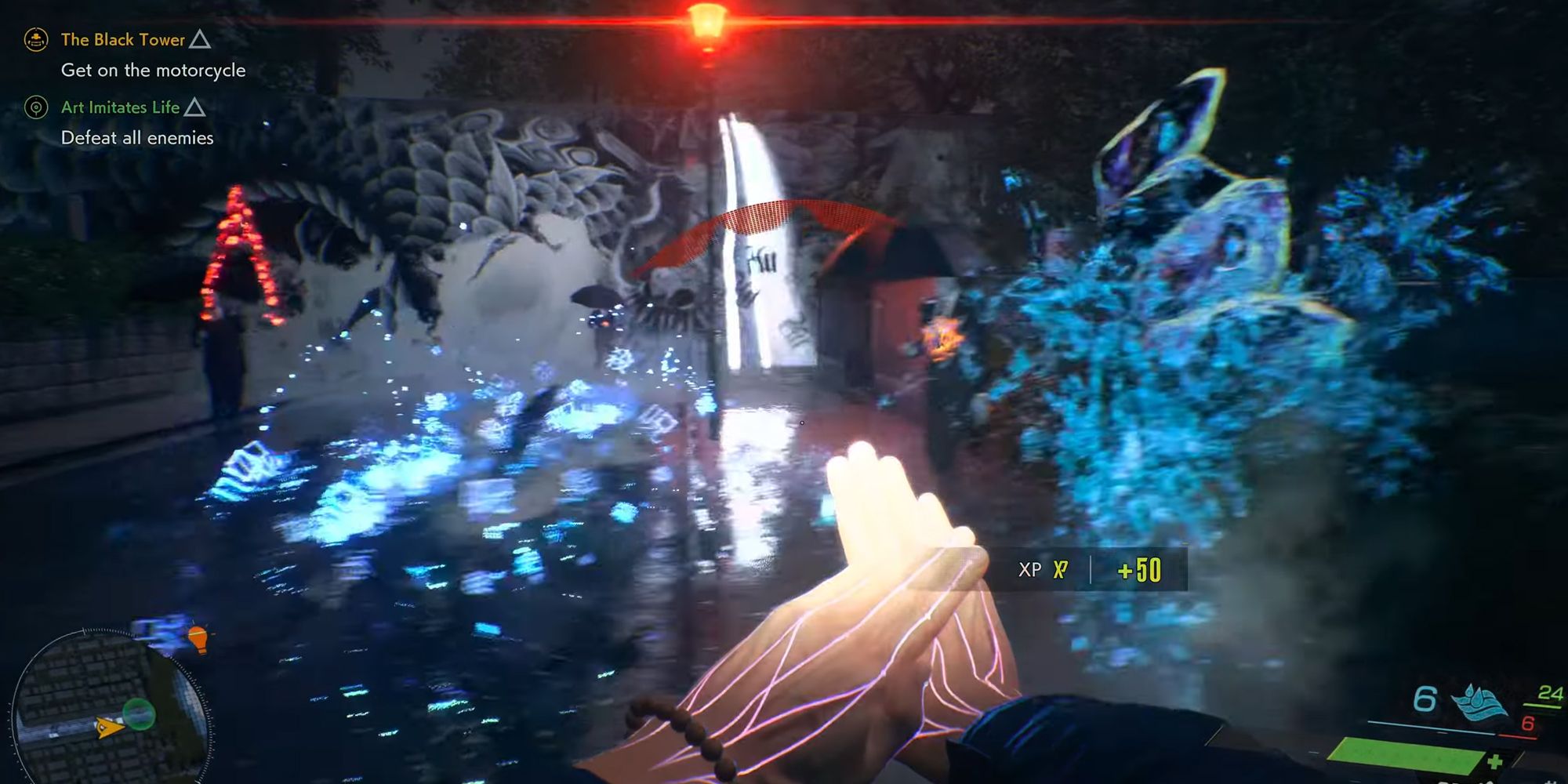 Tracking down a dragon sounds like some dangerous fun, especially with the intrigue of a dragon painting that has escaped, and now you and KK have to locate it. Art Imitates Life begins by talking to a Priest who tasks you with finding this dragon painting. Follow the trail of the dragon, fighting any enemies that appear in the process.

You'll go on a bit of a wild goose chase, but the last place the dragon will escape to is a large wall at the end of a street, where some Rain Walkers will spawn. Kill these enemies and the final Walker that spawns, and then the quest will finalize, rewarding you with a ton of money for your efforts. 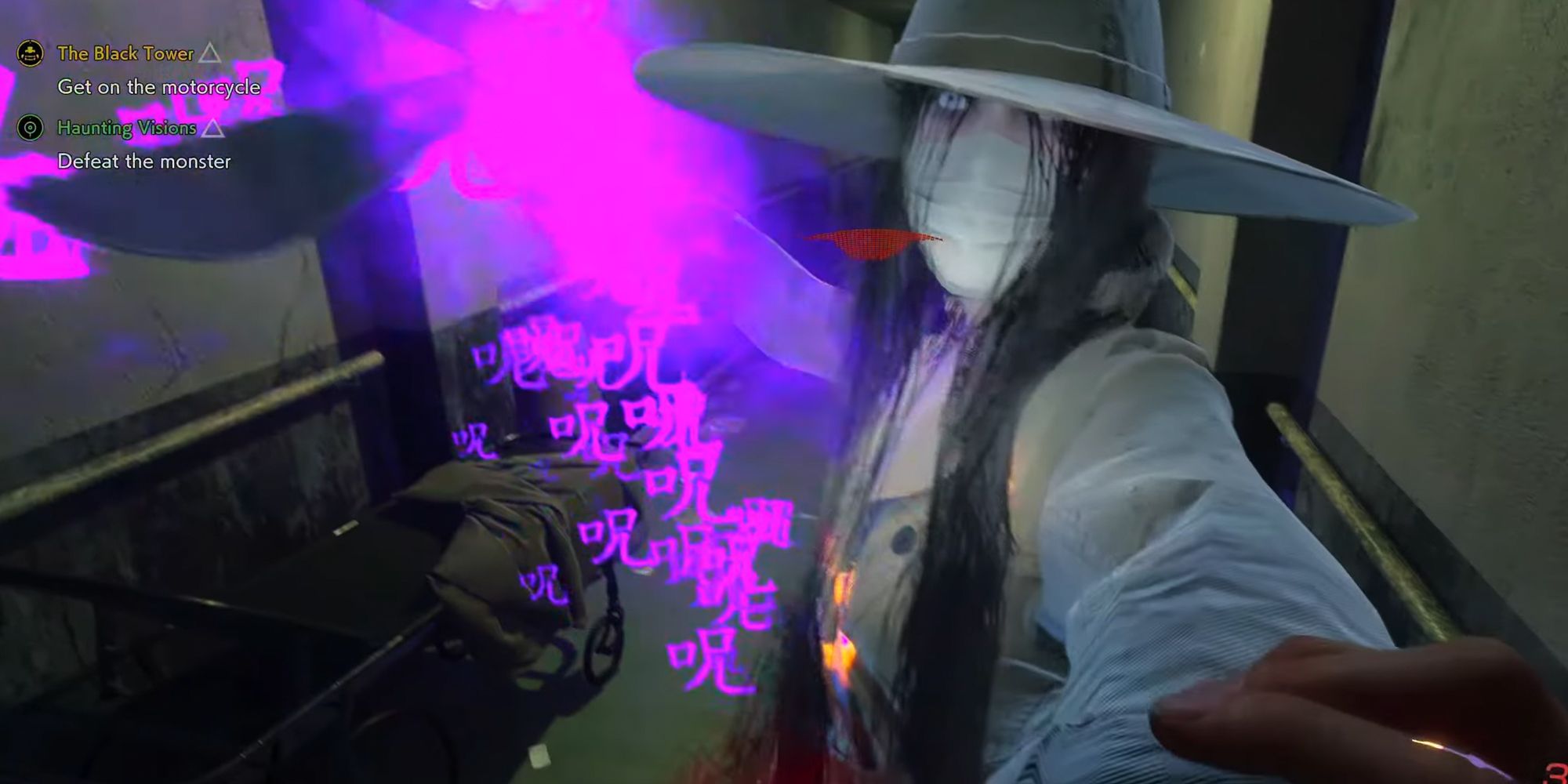 Haunting Visions is one of the spookiest missions in Ghostwire Tokyo. A tale that takes you to a young girl (Misaki) in a hospital who is fearful of a monster she sees whenever she closes her eyes. Head through the hospital until you get to a room where you'll need to enter a code. Enter this code, and when you head into the room, your surroundings will begin to look a little off.

The following area is reminiscent of places from Silent Hill. Continue on, and eventually, you'll meet the monster, which is a Kuchisake. Defeat the Kuchisake, exit the hospital and collect your rewards.

4 A Stop In The Void 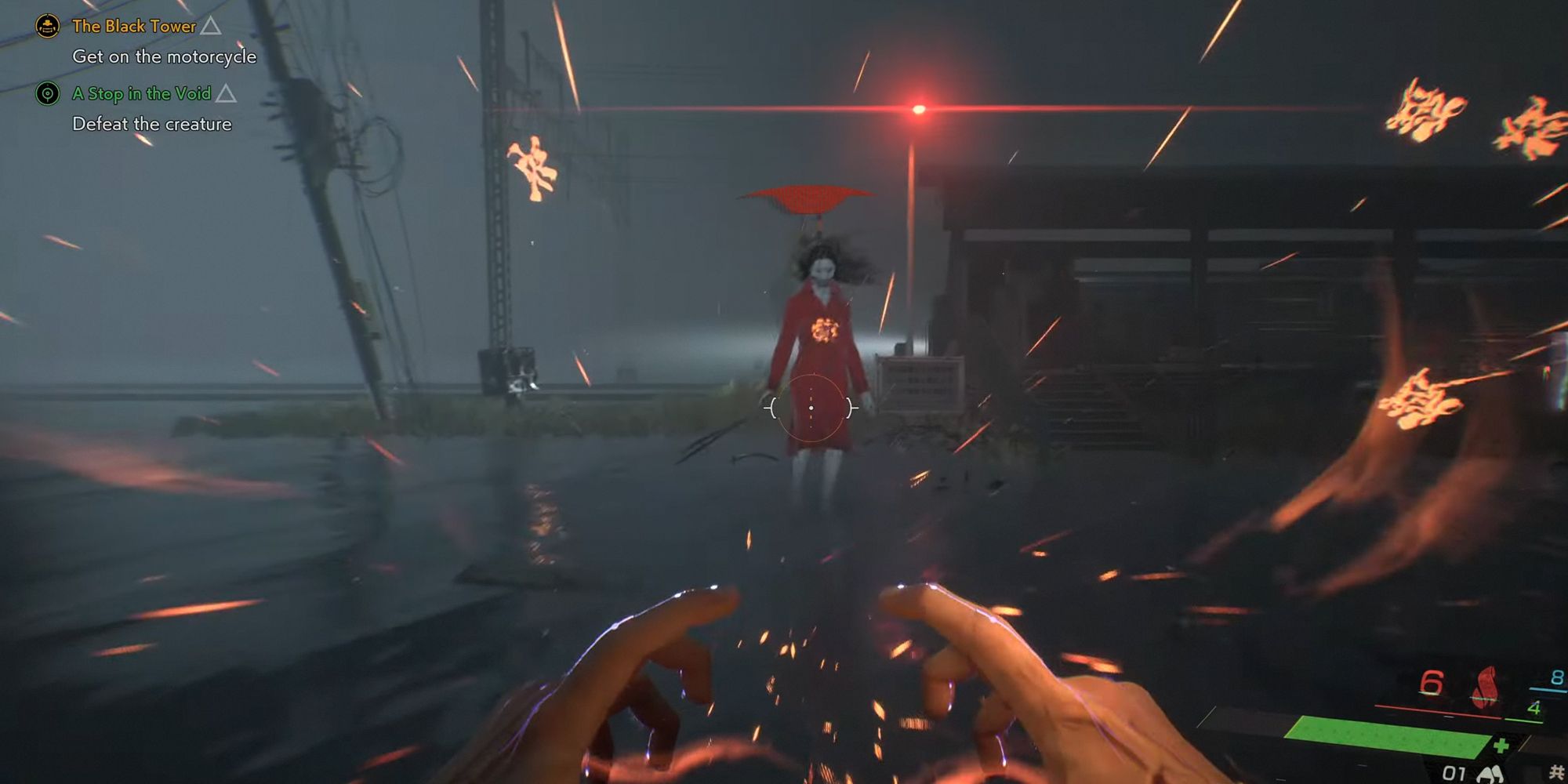 A Stop In The Void takes place in a Subway Station that begins to change with altered surroundings, just like the hospital in the Haunting Visions quest. You enter the station under the premise of searching for a train stop that doesn't exist. Take out the enemies that spawn once down there and hop onto the phantom train once it arrives. 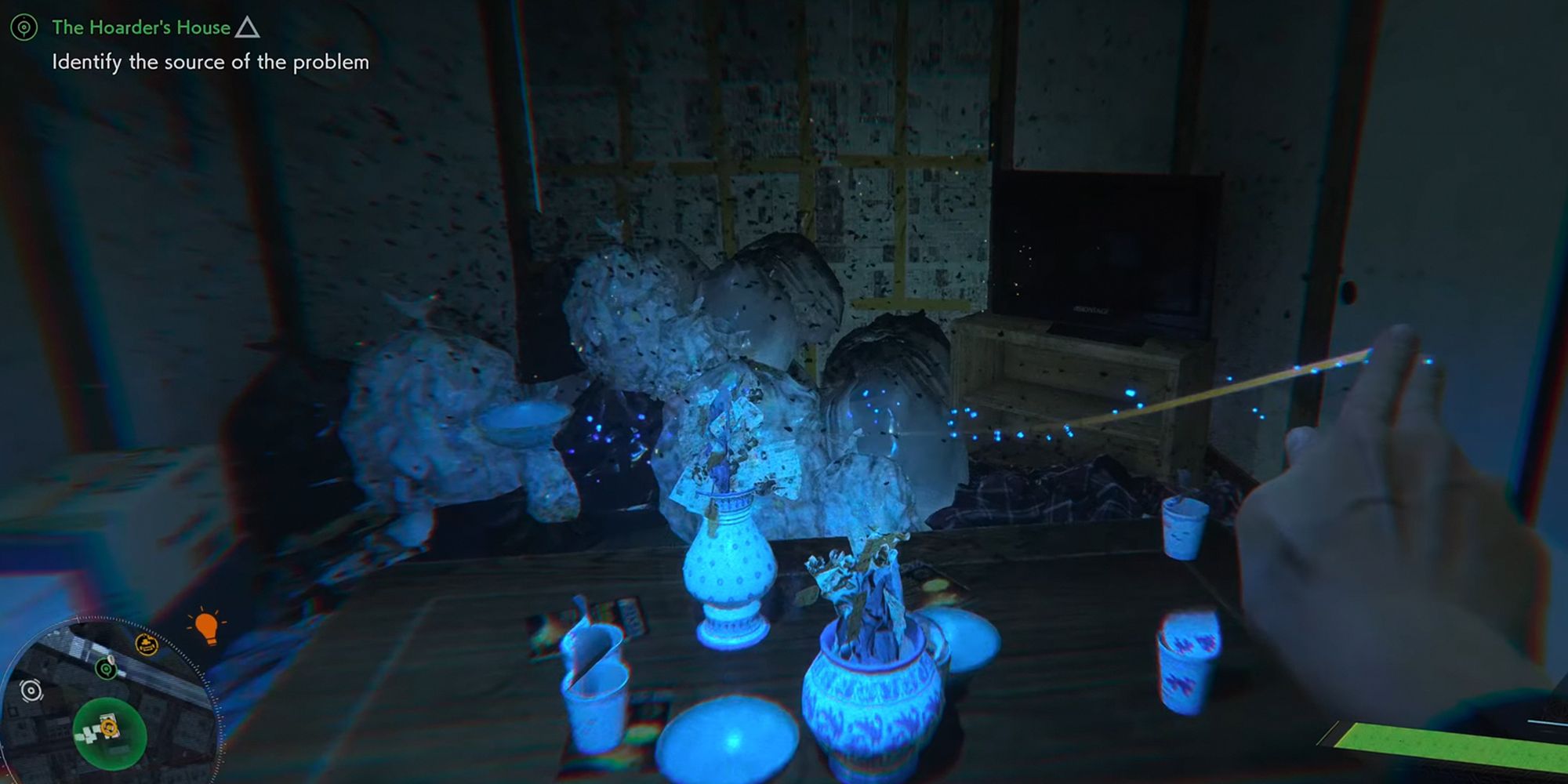 The Hoarder's House starts when a man tells you about a nearby house preventing him from returning home. Head over to this house, and you'll see precisely what he's talking about. Enter the house to figure out the problem, where you'll find a Specter has taken a liking to the home. Flush out this Specter by cleaning up the house using your hand gestures until you're brought into a combat arena.

Waves of enemies will be thrown at you, so the first thing you need to do is defeat these enemies and then deal with the Specter, and the quest will be concluded. 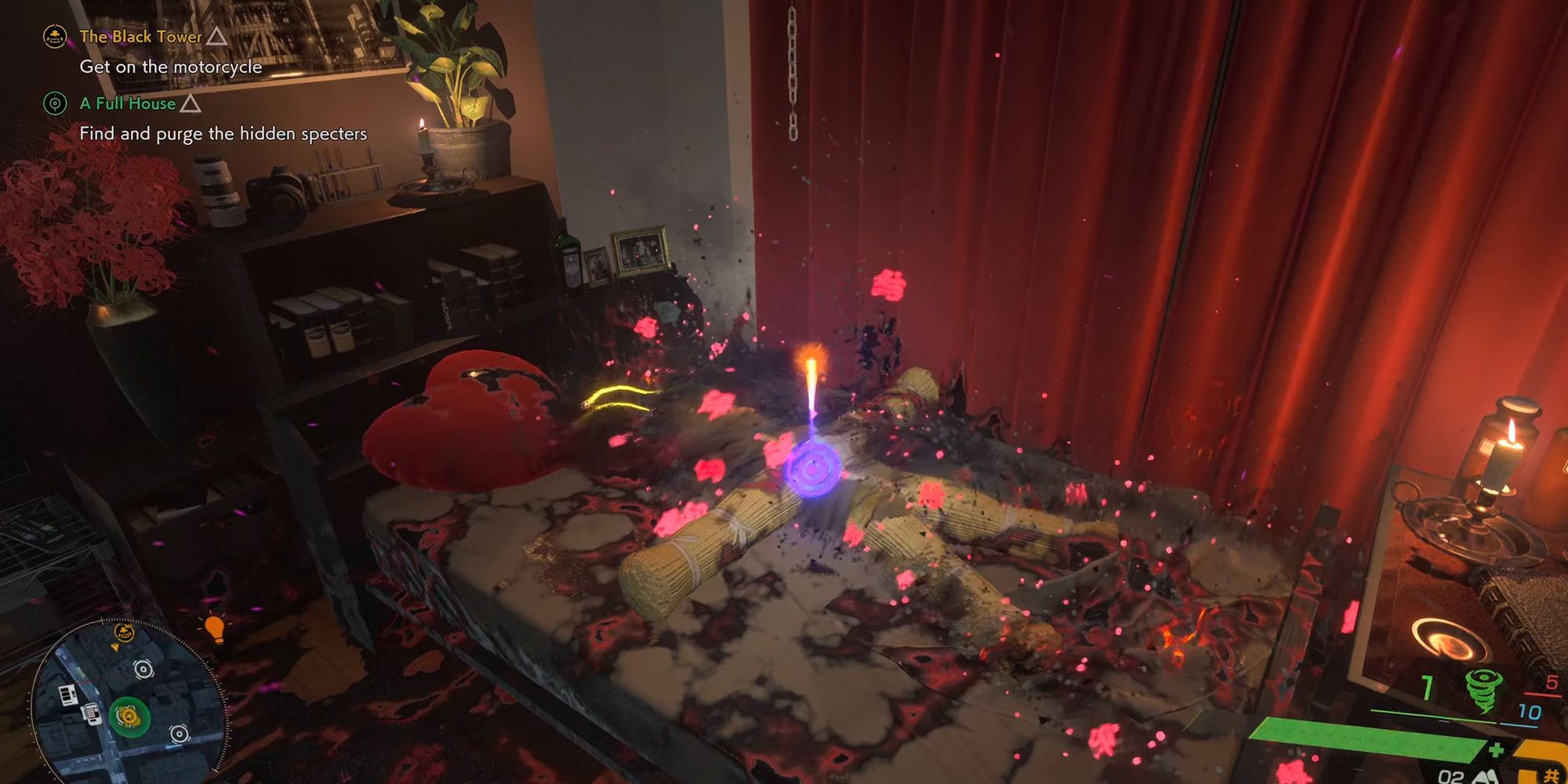 Only recently have games started including Content Creators in their worlds, with Ghostwire Tokyo being one of these games. To complete the A Full House quest, you must enter the house of a Content Creator with a particular interest in spirituality. Once inside the apartment, you'll discover the root of the problem: Specters have taken home in different objects around the apartment.

Exorcise these spirits and return outside to the creator to finish the mission. You'll receive 3,000 Meika, which is pretty solid for such a short mission. 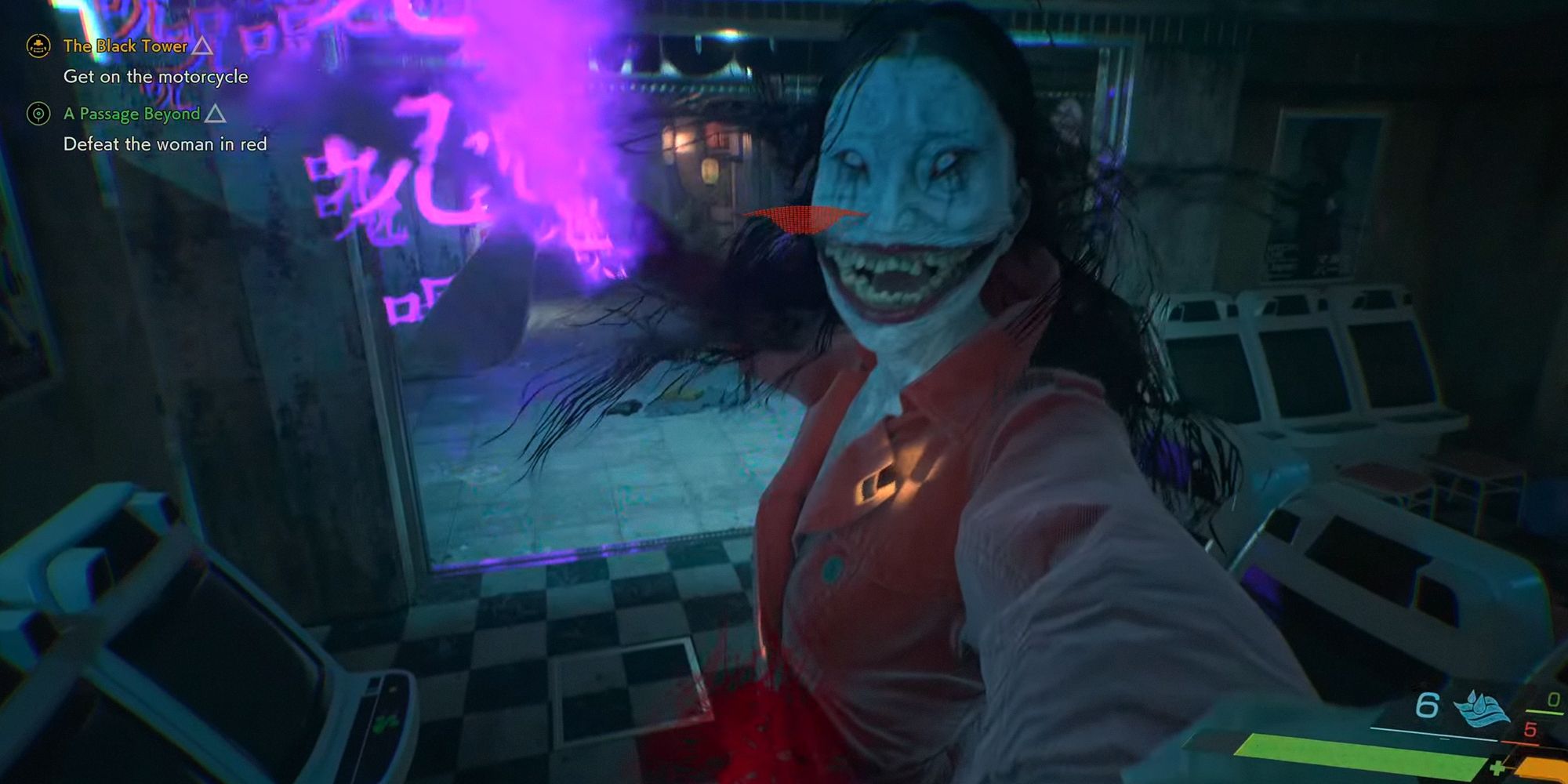 A Passage Beyond is another side mission where you enter an area that supposedly doesn't exist. In this case, it's a basement that you can enter by using your Spectral Vision and finding a Nurikabe. Once inside this underground area, you'll finally get to uncover the creepy feeling coming from the building. In one of the rooms, there will be a console that, once you get close enough to, will display an image of a Crimson Kuchisake.

Kill the Kuchisake, and the quest will be completed, giving you quite a few goods for your work, including 10,000 Meika and a Magatama.