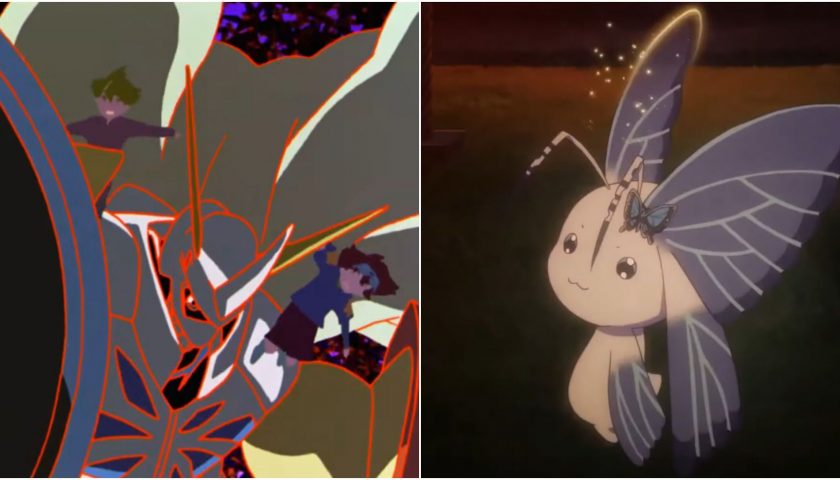 Digimon movies have been releasing ever since 1999. Other than Digimon Xros Wars and Digimon Universe Appli Monsters, every Digimon series has had at least one movie based on it, and a select few Digimon movies aren't related to any of the anime series at all. 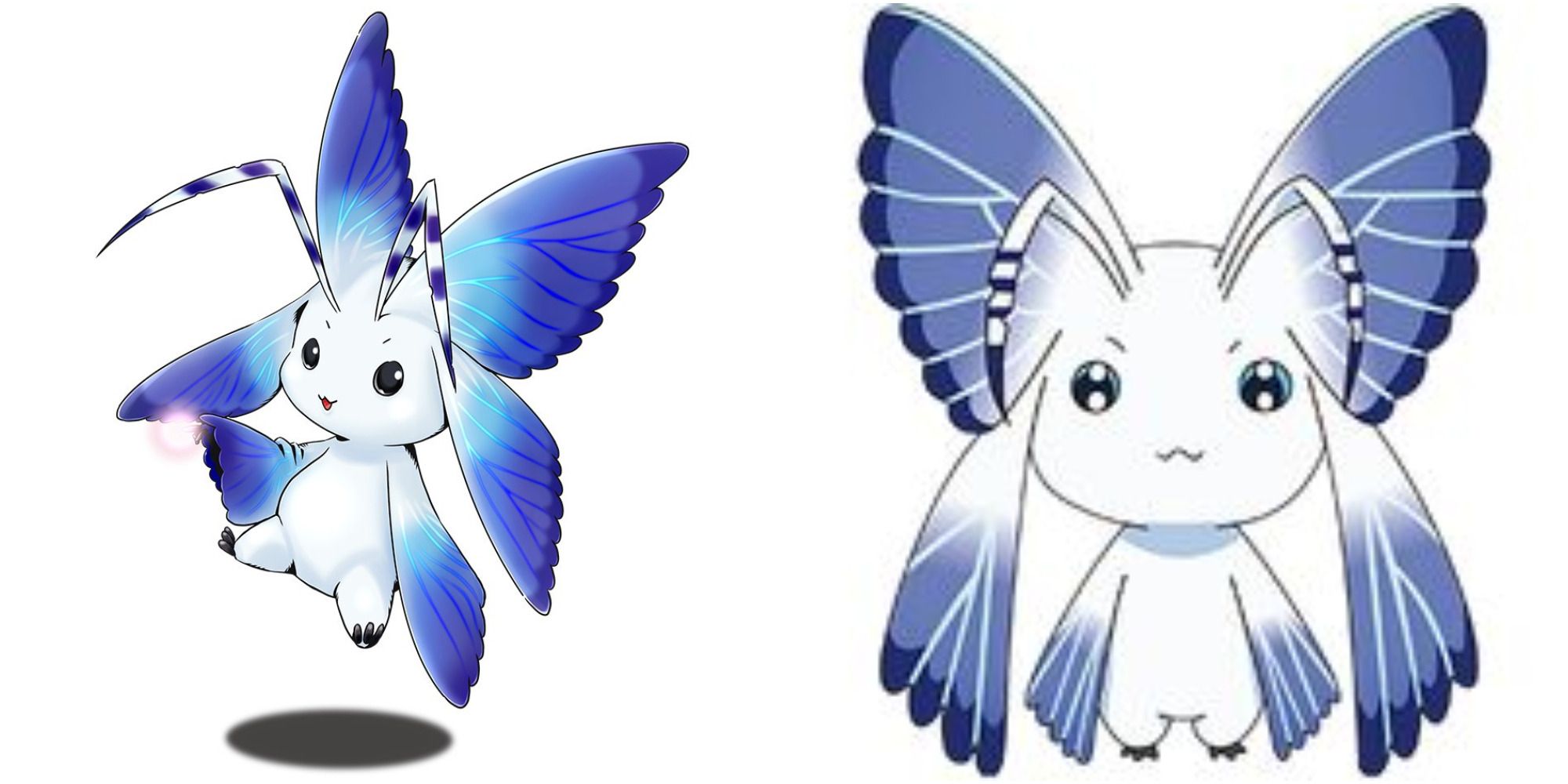 Morphomon is a rookie Digimon introduced in Digimon Adventure: Last Evolution Kizuna and is the former partner of Menoa Belluci and a critical character in the story. The only reason Morphomon isn't higher on the list is that the audience is only ever shown its rookie form, with its other forms being artificially created Digimon made from the remains of its data. Morphomon's true Champion form, Hudiemon, did appear as an obtainable Digimon in the Pendulum Z virtual pet series and Digimon Story: Cyber Sleuth: Hacker's Memory, although Morphomon itself has not appeared outside of Last Evolution Kizuna and the Digimon Card Game. 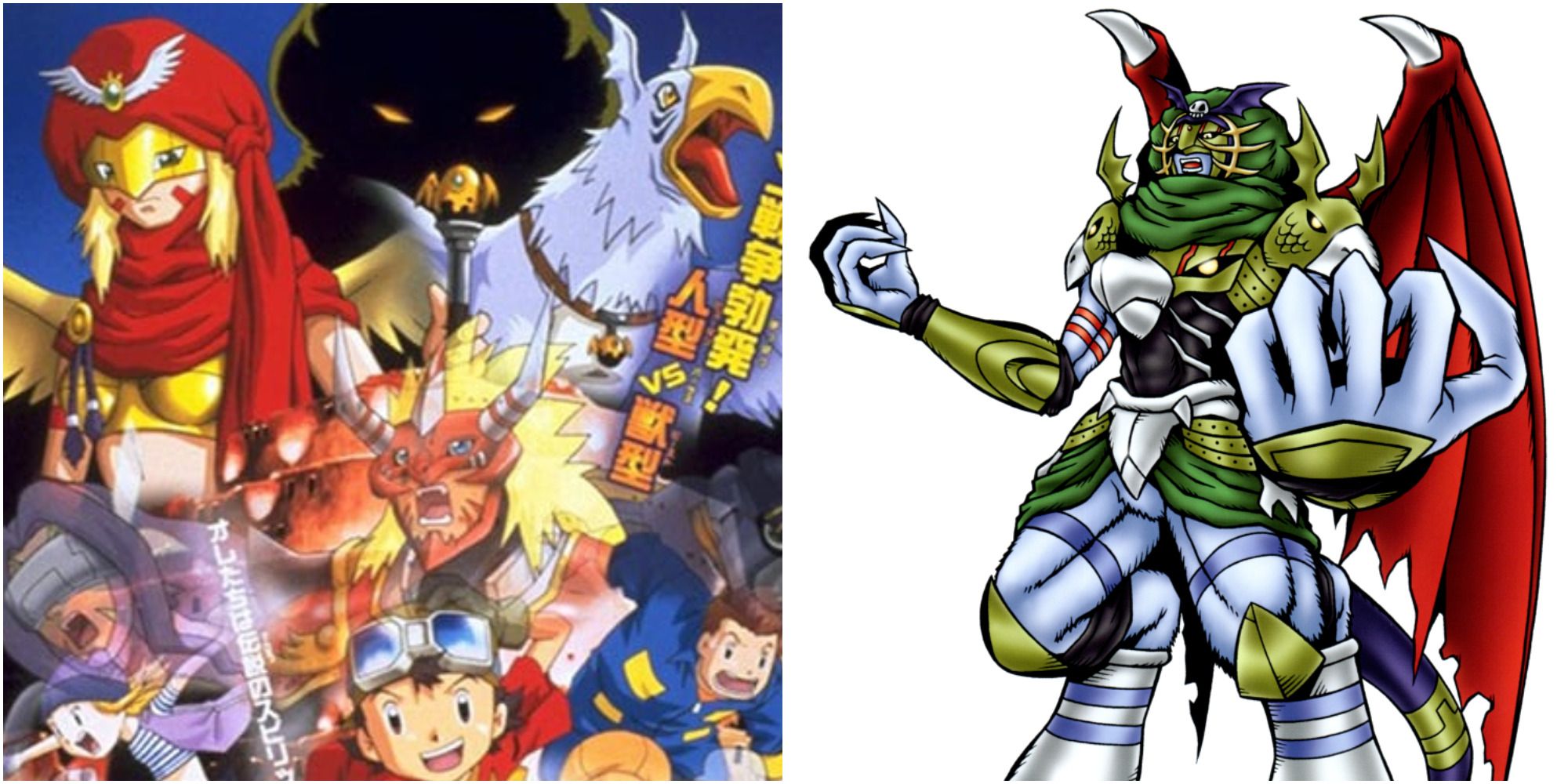 Murmukusmon is the primary antagonist in Digimon Frontier: The Island Of Lost Digimon. While not all that powerful himself, he is cunning and causes a major conflict between the beast Digimon and human Digimon that inhabit the island, hoping that it will cause the revival of Ornismon so that they can get their revenge on the Digital World for banishing them. To lead the separate tribes of Digimon, Murmukusmon disguises himself as both Darcmon and Hippogriffomon by using slide evolution, influencing both tribes to fight each other until the DigiDestined find out the truth and reveal it to the fighting Digimon. 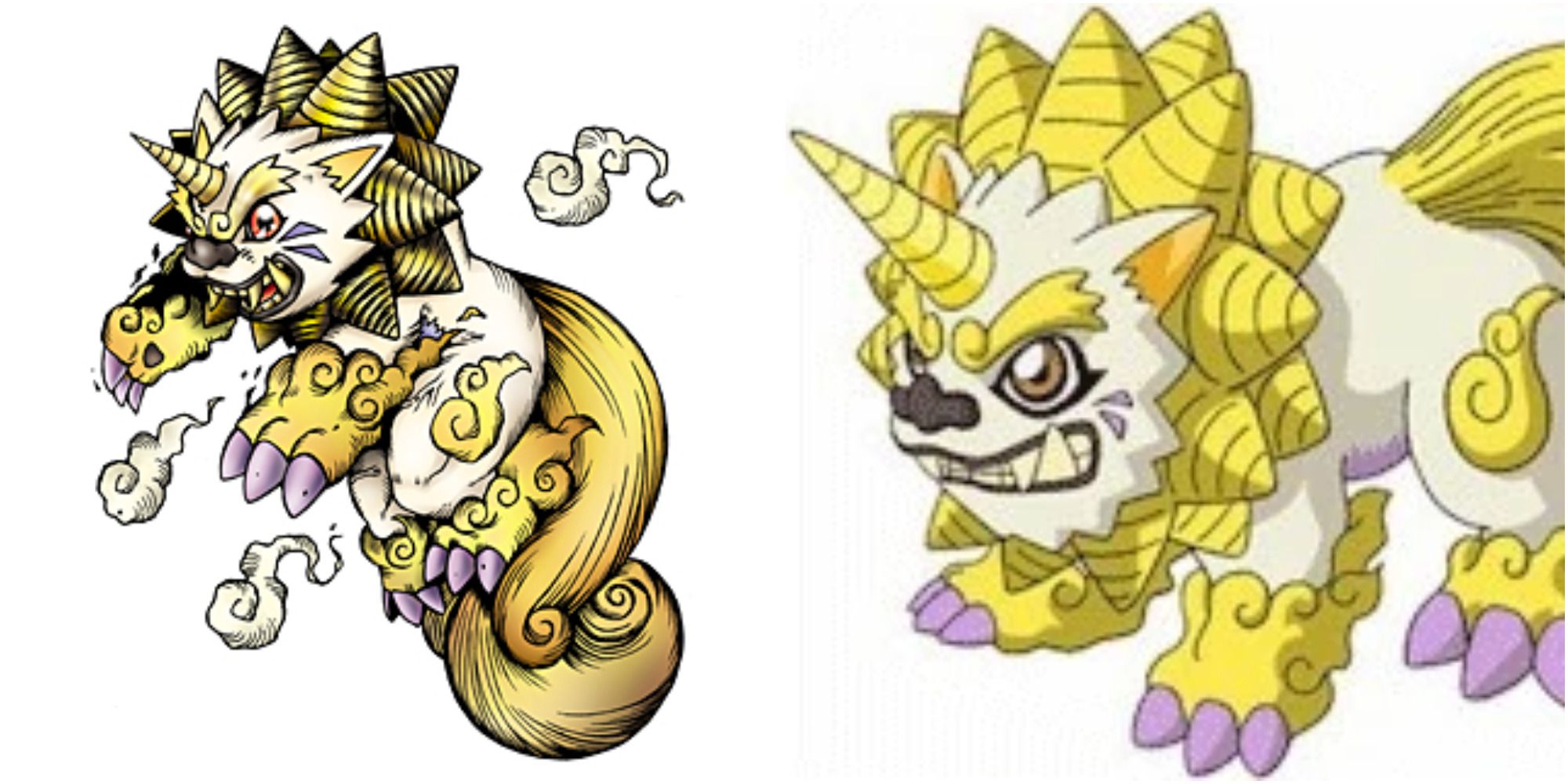 Seasarmon is a Champion level Digimon and Minami Uehara's partner, both introduced in Digimon Tamers: Battle of the Adventurers. Seasarmon is a vaccine-type Digimon and was originally a prototype for a virtual pet called V-pet that was later infused with a vaccine that could counteract the virus present in all other V-pets. After Seasarmon is defeated by the movie's antagonist Mephistomon, and dedigivolves to his rookie form Labramon, Minami cries over him and calls him Mei — the name of her late puppy — which causes the vaccine program within him to activate and eliminate all evil Digimon besides Mephistomon as well as all the corrupted V-pets. 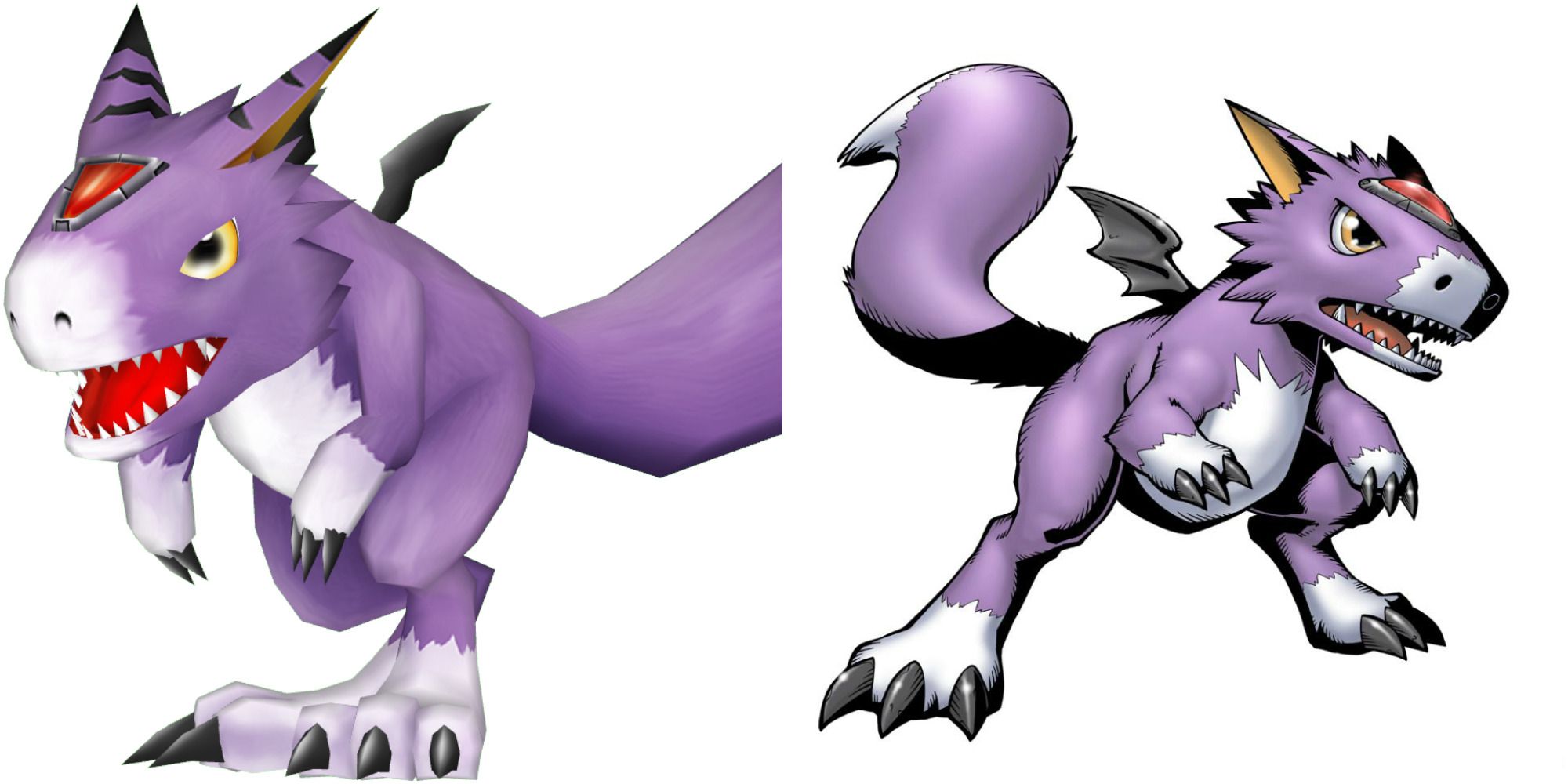 Dorumon is a Digimon born with the x-antibody and first appeared in Digital Monster X Evolution, a movie based on the Digimon Chronicle manga, where it served as the protagonist. Throughout the movie, Dorumon digivolves into his Champion, Ultimate, and Mega forms, the latter of which is Alphamon, and it is revealed that he had lost his memories before being reborn as Dorumon. 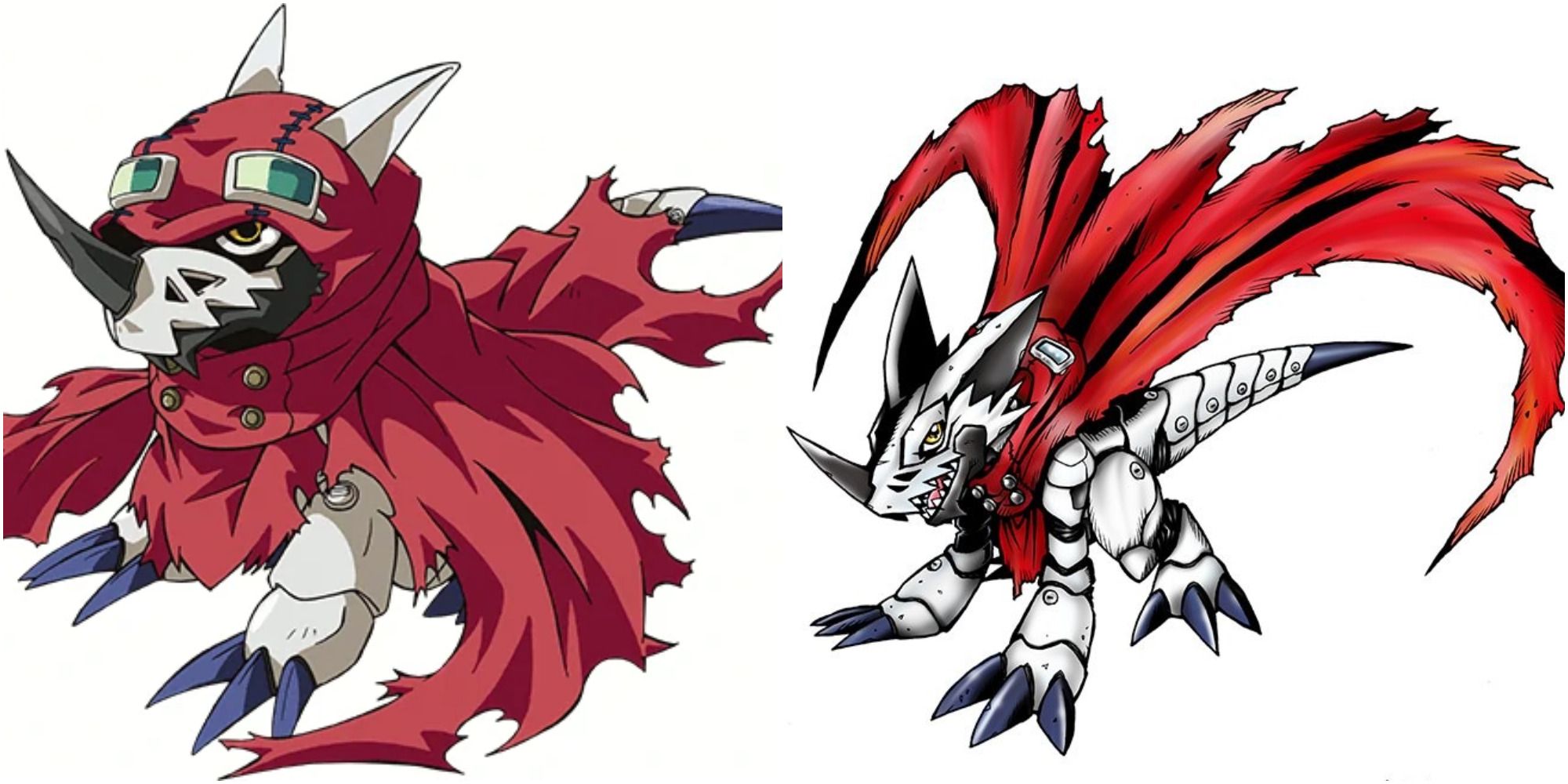 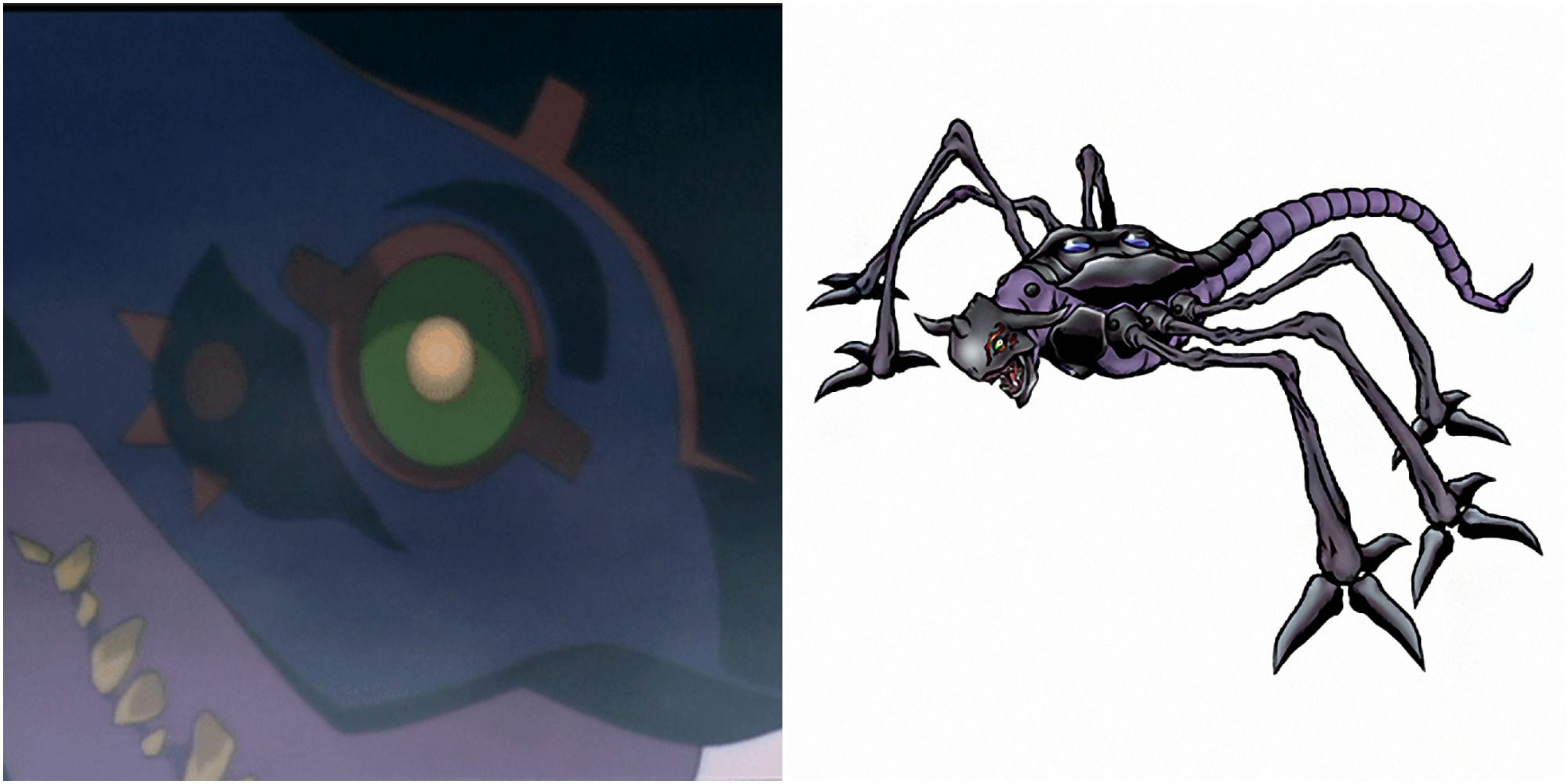 Armageddemon only appeared in Digimon Adventure 02: Revenge Of Diaboromon but was created in an interesting way. Diaboromon separates most of its data into Kuramon and starts sending itself to cellphones. After being seemingly defeated by Omnimon within the internet once again, the Kuramon all come out of cellphones and combine into a new Digimon, Armageddemon. 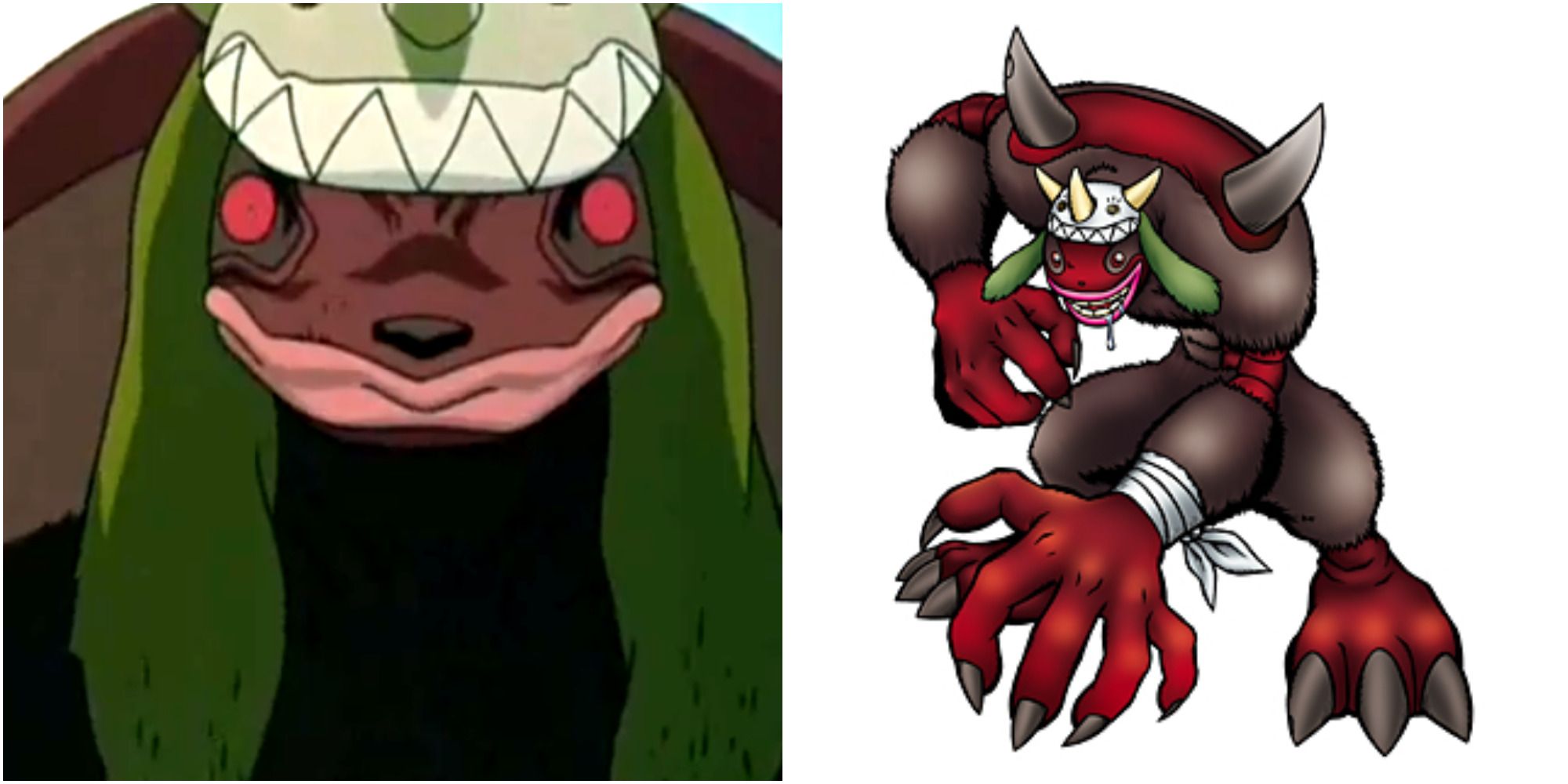 Wendigomon, or Endigomon, is the corrupted Champion form of Kokomon from Digimon Adventure 02: Hurricane Landing, also known as the final act of Digimon: The Movie. Unlike its other forms, Wendigomon never got a major role in any other Digimon media besides Hurricane Landing. In the dub, Kokomon digivolves into this form due to a virus corrupting him, and he remains in this form for most of the movie until digivolving again. Once the DigiDestined succeed in destroying the virus, he happily dances and poorly sings along to All-Star by Smash Mouth, making it hard to hate him despite the ordeal he previously caused. 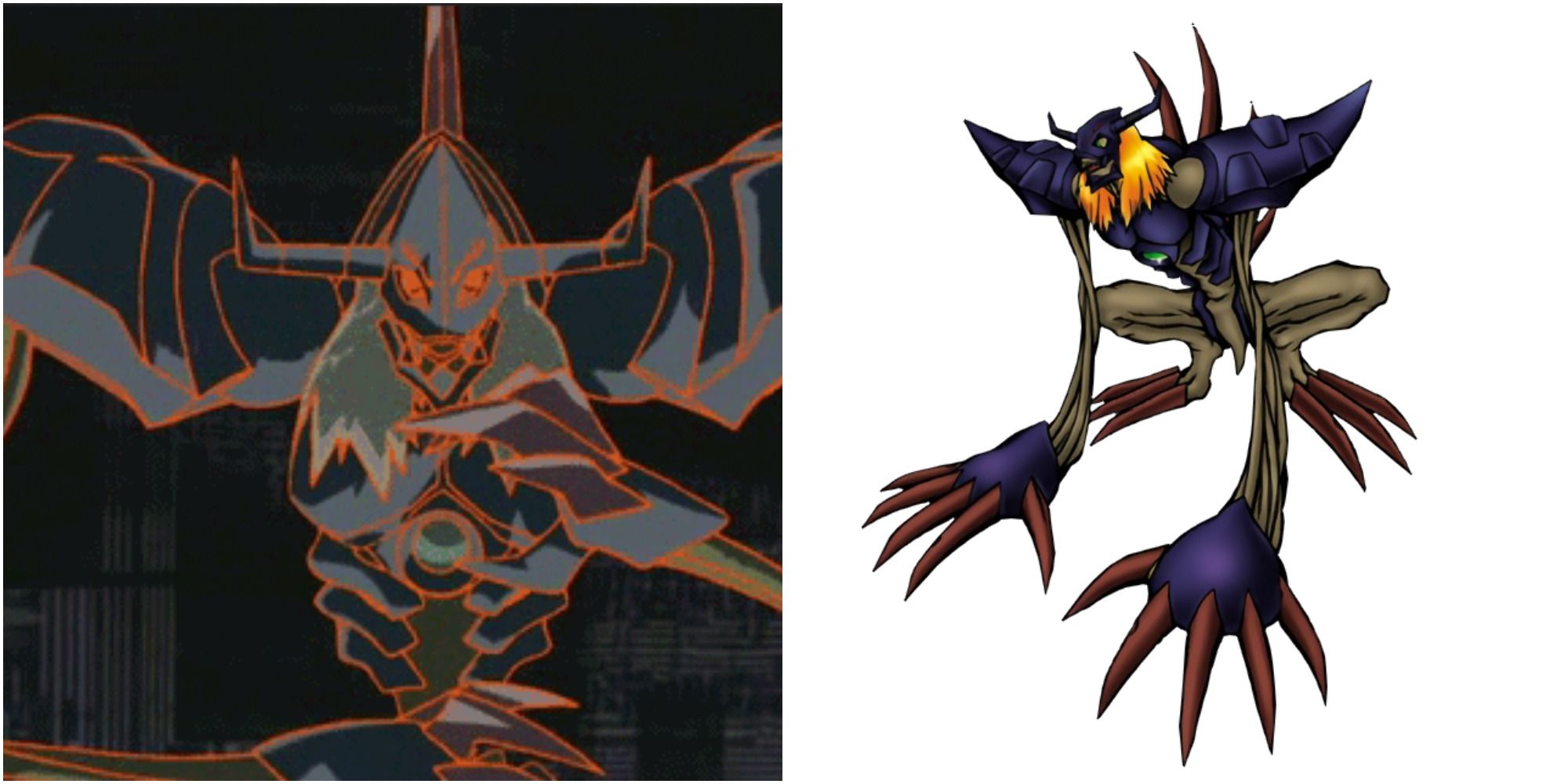 Diaboromon is the antagonist from Our War Game, or the second act of Digimon: The Movie, and one of the most noteworthy villains from the Digimon Adventure series. Diaboromon's goal is to absorb as much data as possible, no matter how it harms other beings, and fight anyone who gets in its way. The more powerful it becomes, the more it can affect the real world, to the point that it can cause data breaches and launch nuclear warheads. It took the combined power of Wargreymon and Metalgarurumon fusing into Omnimon and kids lagging it out by sending emails to defeat Diaboromon and prevent worldwide disaster. 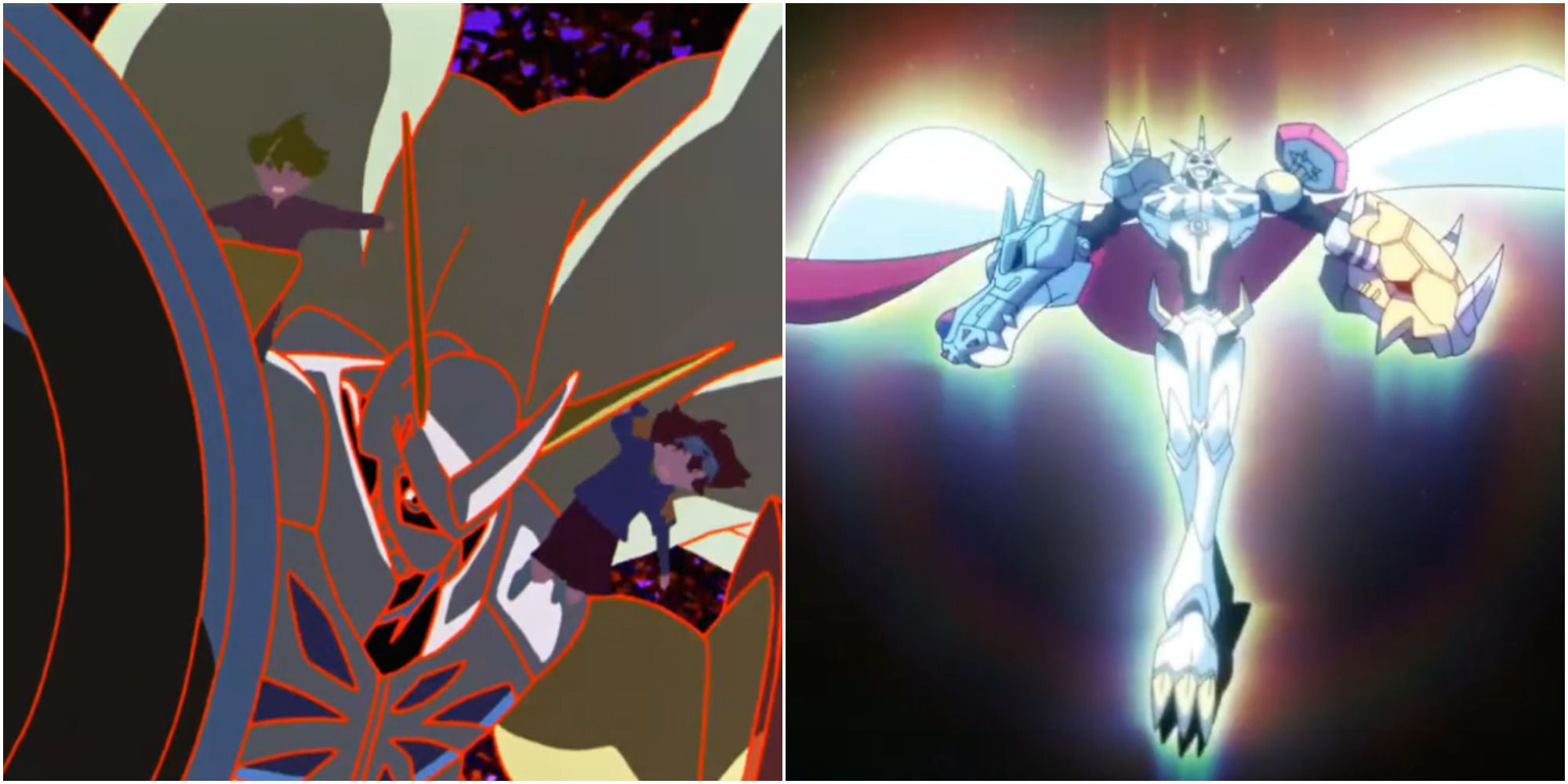 Omnimon first appeared in Our War Game during the fight against Diaboromon and has become one of the most popular Mega Digimon since then. Omnimon was the first DNA digivolution, which served as the way for it to be introduced in Digimon Adventure 02, although Omnimon didn't appear in the series until the Revenge of Diaboromon. Omnimon also plays a crucial part in Digital Monsters X Evolution, Digimon Data Squad, and of course, Digimon Adventure Tri, but the former two are different characters from the latter. Many now well-known aspects of the franchise wouldn't exist if it weren't for Omnimon. 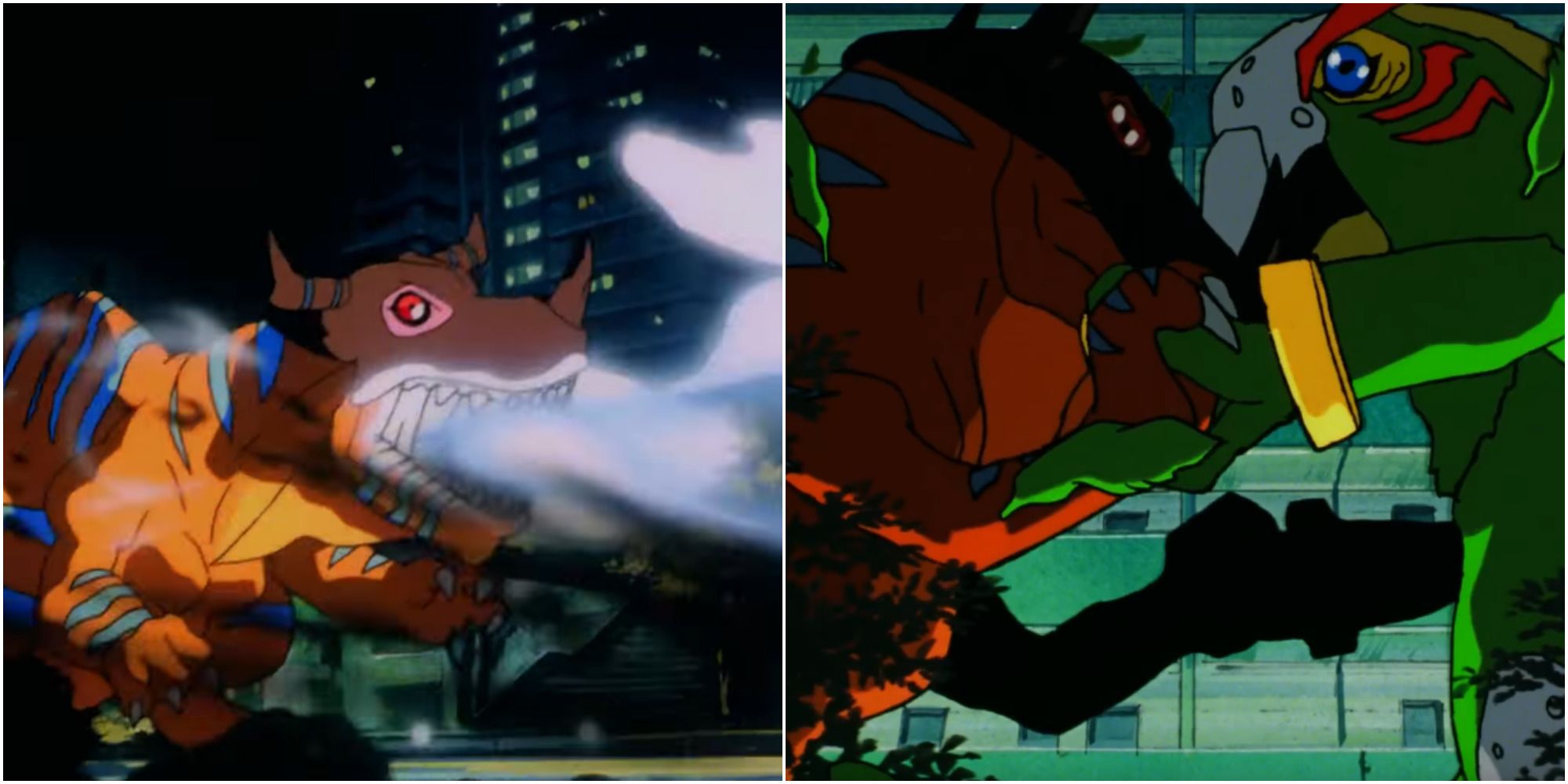 Greymon is a popular pick for many lists discussing the "Best Digimon," but this is typically due to nostalgia rather than being the first partner Digimon to kick off the entire anime series. Greymon first appeared in Digimon Adventure, not the anime series, but the movie of the same name, which was shown before the series premiered in Japan. This Greymon and its earlier forms were once said to be separate from Tai Kamiya's partner in the anime series due to their size and personality, but it turns out that after returning to the Digital World, Agumon had just lost his memories of the event.