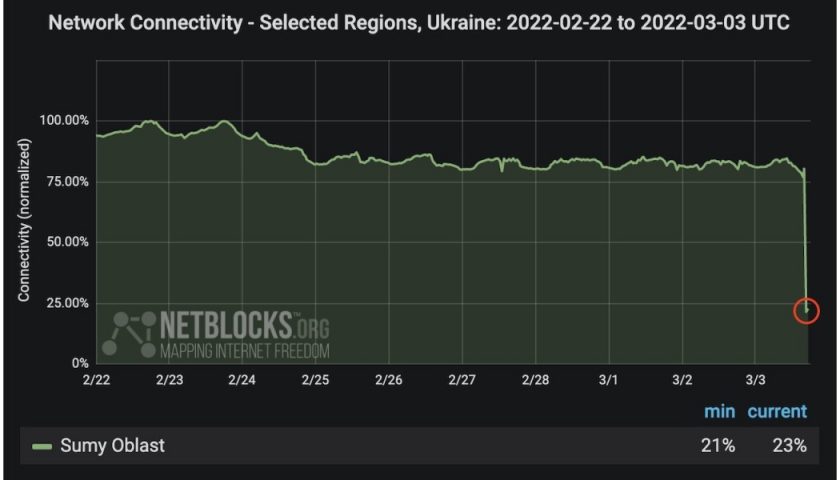 The first major regional telecommunications blackout in Ukraine, since Russia’s invasion of the country a week ago, was reported Thursday.

At 8:23 p.m. Ukraine time, internet service tracker NetBlocks tweeted that it has confirmed that a telecommunications blackout has just been registered throughout Sumy Oblast in northeastern Ukraine.

The blackout was reported as “residents report massive blasts at the thermal power plant and electrical substation that turned the sky ‘yellow and red’ for miles,” NetBlocks tweeted.

“This is the largest regional telecoms blackout that we’ve tracked since the beginning of the conflict,” said Alp Toker, director at NetBlocks, in a message to VentureBeat.

Telecoms service in Mariupol has been faltering and went out in a few stages, but the situation in Sumy Oblast “is a single discrete event,” Toker said. “It looks serious.”

Sumy Oblast has a population of just over 1 million people. Its central city, Sumy, is located about 336 kilometers (208 miles) to the east of Ukraine’s capital, Kiev.

Until this point, Ukraine’s communications infrastructure had not been severely affected since the start of the Russian attacks.

The report of blasts at a power plant would seem to rule out the role of cyberattacks in the outage, though there wasn’t any information immediately available on that.

Other Ukranian cities including Kyiv and Kharkiv have experienced internet disruption at different points, in the wake of Russia’s unprovoked attacks against Ukraine, but have not faced a total blackout in service at any time, NetBlocks reported previously.

Russia’s strategy so far has been “disastrous,” and the Russian military is now resorting to heavy armament and explosives to cause destruction in civilian-concentrated areas, ContraForce CEO Stan Golubchik said in an email to VentureBeat on Wednesday.

Russia has a history of being “very destructive when wars aren’t going its way,” said Eric Byres, CTO of aDolus Technology, on Wednesday.

Alex Bornyakov, deputy minister of digital transformation for Ukraine, told TechCrunch this week that Ukraine has “multiple levels of backups” for its communications infrastructure. As one potential element, a shipment of Starlink satellite dishes was sent to the country this week by SpaceX CEO Elon Musk.

In the early stage of the Russian assault, cyberattacks were not used to crippled Ukraine’s communications infrastructure, as many had feared. That had allowed phone and internet service, critical to Ukraine’s defense and morale, to continue functioning.

Experts told VentureBeat on Wednesday that there was a strong likelihood for a greater impact on communications systems going forward. “The potential for both cyber and kinetic attacks to escalate remains,” said Danielle Jablanski, an OT cybersecurity strategist at Nozomi Networks, on Wednesday.