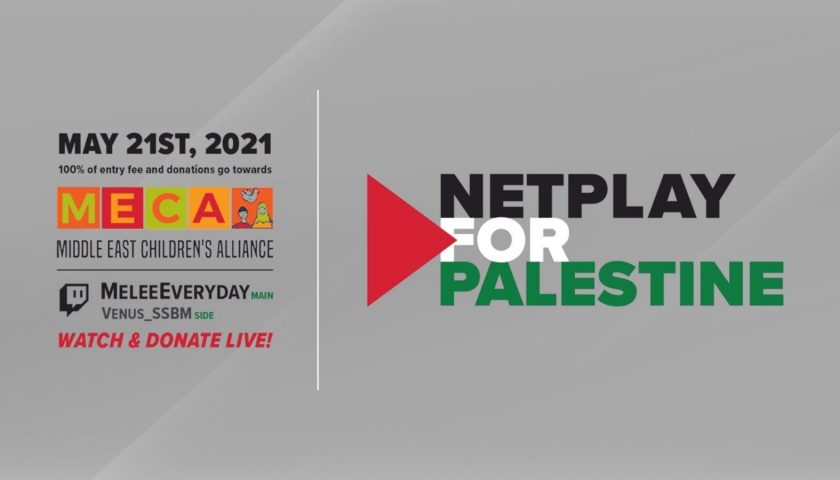 Pro players took to Super Smash Bros. Melee this weekend to compete in the charity tournament, Netplay for Palestine. It quickly attracted the biggest names in the Esport, all in aid of raising money for the Middle East Children’s Alliance (MECA).

The tournament took place on Twitch, accepting donations from viewers while players such as Hungrybox, Mang0 and Magi duked it out in the cult classic fighting game.

Prizes were available in a sweepstake, ranging from the more gaming oriented, such as a custom GameCube controller, or even the chance to be coached by a pro player, but also featured prizes intended to raise awareness to the plight of the Palestinian people, such as literature, or handmade jewelry crafted by Palestinian women.

Netplay for Palestine easily surpassed its primary goal of raising $10,000, and comfortably beat its stretch goal of $20,000. According to the organizers, 100% of all the money donated during the event will go directly to the charity, as well as all the entry fees from players. As for the game itself, Fox and Marth player Lucky won in singles, and Ralph and Darkatma won in doubles. There were a total of 257 contestants

The charity of choice, MECA, currently has staff on the ground in Gaza. Since the first day of the renewed attacks on the region, MECA has been delivering food, clean water, and hygiene products to children and families who have been displaced in the prolonged bombings. On top of this direct action, they also provide scholarships to Palestinians living in the Gaza Strip and the West Bank.

This is far from the only fundraiser for the region in the gaming community. GameSpot’sTamoor Hussain raised $25,000 for Palestinian mutual aid groups last Thursday, and YouTuber/Twitch streamer Shaun raised $70,020 by playing a staggering 90 hours of Final Fantasy 10 in one week.

Anyone who wishes to make a further donation to MECA can do so on its website. Other charities offering support in the region include the Palestinian Children’s Relief Fund, Anera, and and Gaza Emergency Relief Fund.