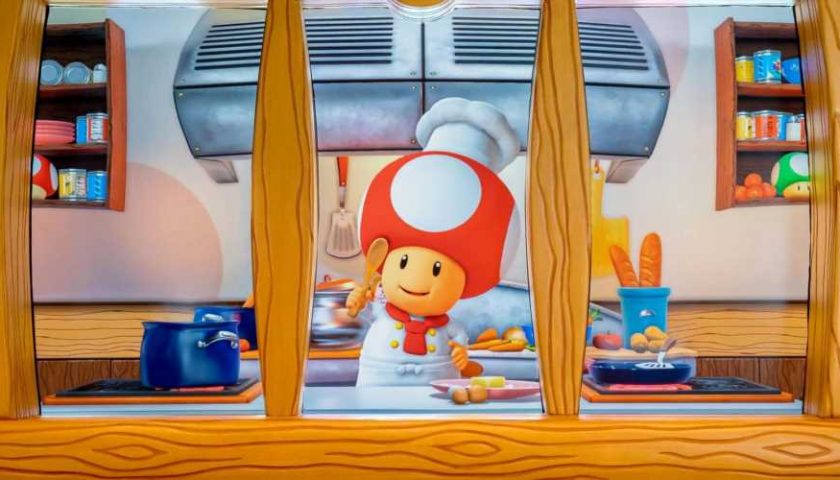 Super Nintendo World Hollywood's food menu at the Toadstool cafe is being called the "downgrade of the century" in comparison to the Japanese theme park, with particular annoyance being directed at some of the desserts.

Last week, Super Nintendo World Hollywood opened earlier than expected, giving lucky guests at Universal Studios the chance to check out the Mushroom Kingdom for the first time outside of Japan. Mario fans have been sharing their impressions of the park over the past few days and, while most of it is positive, there have been a few notable complaints.

As highlighted by Twitter user Acuna_Mattata, the biggest difference between the two menus is the Princess Peach cake. While Super Nintendo World Japan gets an iconic cake based on the one that Peach bakes for Mario in Super Mario 64, Hollywood instead gets a pretty boring-looking cupcake that's being called the "downgrade of the century".

The cupcake might be the most egregious example on the menu, but there are some other notable missing items or downgrades. One other popular item that hasn't made the jump is the Pizza Bowl, a mushroom-shaped meal that has pizza bread as the top and then a sauce of tomato, bacon, and mushroom. Dear god that sounds good, but it's completely missing from the US menu.

Other examples highlighted by Matt include the Mario and Luigi hat desserts that are making so hungry I could cry just by looking at them, and the turtle shell calzones that make me want to fly to Japan right this second. Those are already some pretty big misses, but if you want a few other examples of food you won't be able to eat in Hollywood, there's also Yoshi’s Spinach Carbonara, Teriyaki Chicken and Super Star Rice, and some drinks that have Mario and Luigi moustache straws.

It's not too surprising to see some of the more intensive items taken off of the menu (that cake must have been a massive pain to make each time), but it's still a shame to see Japan's park already beat the Hollywood one, just a few days after it launched. At least the US has the Super Star Chicken Salad, right? If you want a closer look at the differences between the two, check out Twitter user guyselga's menu comparisons.

Although it's quite interesting to see the changes between the US and Japanese Super Nintendo World menus, it's interesting to note that Vice president of Universal Creative, Jon Corfino, recently said that the Hollywood park would be nearly "pound-for-pound" the same as the one in Osaka, minus the Yoshi ride. Corfino even directly referenced the "visual experience" being the same, which is something that anyone who has spent the last hour looking at memey comparisons of the two Princess Peach cake can tell you is not true.