StreamElements has partnered with Magic: The Gathering maker Wizards of the Coast to launch SE.CAP, an integrated influencer marketing platform that helps brands monitor content creators and motivate them with rewards.

For brands, the platform helps grow and manage creator communities and programs while streamlining the process of creating measurable and scalable reward-based activations with influencers.

For the influencers and livestreamers, it helps them make more money without a lot of the hassle usually involved in working with brands.

Palo Alto, California-based StreamElements calls SE.CAP (short for StreamElements Creator Activation Program) the most comprehensive creator activation platform for brands to initiate, grow, manage, and scale their own influencer programs. SE.CAP is making its debut with game publisher Wizards of the Coast, whose initial program involves Magic: The Gathering fans.

In addition to handling intricacies of managing an extensive creator network, SE.CAP enables
brands to offer sponsorship programs directly to both livestreamers and video-on-demand content creators from the top social media sites — including YouTube, Facebook, Mixer, Instagram, and Twitch –and offer rewards based on community participation and engagement.

Doron Nir, CEO of StreamElements, said in an interview with GamesBeat that SE.CAP streamlines and automates a lot of the drudge work that brands have to do when they negotiate a sponsorships with a streamer. They usually get the streamer to do something, like use a product in front of their online audience. But the task of making sure the streamer does this has to be tracked manually. (Nir will be speaking at our GamesBeat Summit 2020 event on April 28-29 in Los Angeles).

This is a big pain in the butt when the brands are monitoring a lot of influencers who are creating content around a game. This platform is connected into the production stack of the creators.

“It’s for video games, music, anyone who is in the content creation space,” Nir said. “In this case, Wizards of the Coast may have a 100 streamers they have a relationship with. They can use SE.CAP to monitor streamers for Magic: The Gathering. If they stream a certain number of hours a month, then they get a reward like perks or game codes to give out. Our production stack can identify that automatically and we don’t have to verify that individually.”

He added, “The way it works today, if you are a brand, you have to manually verify everything that they do. With the Creator Activation Platform, we’re streamlining and automating a lot of this so brands can track the progress of creators against goals. It’s built almost like an achievement system. There are challenges. You as the game developer post those challenges to the creators. When they complete it, you get a verification they completed it.”

This kind of tool makes possible precision creator curation and cross-platform deployment of influencer campaigns with the ability to measure and scale them. 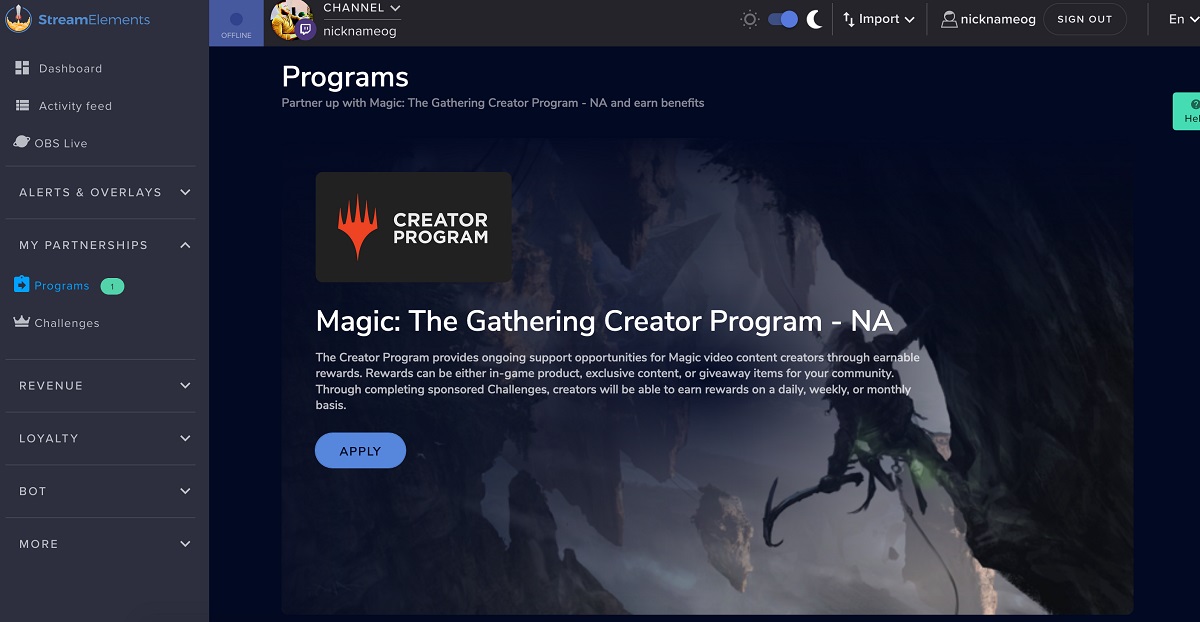 Above: Wizards of the Coast is using StreamElements’ Creator Activation Program.

SE.CAP will be making its debut with Wizards of the Coast. This includes being the first to leverage StreamElements’ SE VideoDrop Live product for the successful global trailer premiere for Magic the Gathering’s War of the Spark card set.

Because Wizards of the Coast has cultivated a large and passionate fanbase which they are equally passionate about supporting, SE.CAP will enable them to better serve their community by providing products and campaign opportunities in an accessible and transparent way.

Aland Failde, vice president of marketing at Wizards of the Coast, said in a statement that the company worked with StreamElements to build the program to expand the dedicated community of Magic: The Gathering content creators.

Wizard’s of the Coast’s Magic: The Gathering Creator Program on SE.CAP beta is now open to
applications from eligible streamers in North America and Europe and will soon kick off with a number
of challenges for them to choose from. This includes streaming MTG Arena during a specific time frame, sending a number of viewers to another Magic streamer’s channel, uploading a deck-building guide for Theros Beyond Death, and playing Magic with their community for 4 hours, with more in the works.

Among the key features of SE.CAP are the following:

In terms of activations, SE.CAP offers a wide range of flexibility for brands. This includes the types of
challenges they want to set for creators, such as creating a VOD with specific content, streaming a
specific game for a set number of hours on a certain date, unlocking achievements, or other concepts.

Brands will also be able to determine what they want to offer participants as rewards, such as potential revenue, early access to new content, in-game items, increased visibility, and promotion.