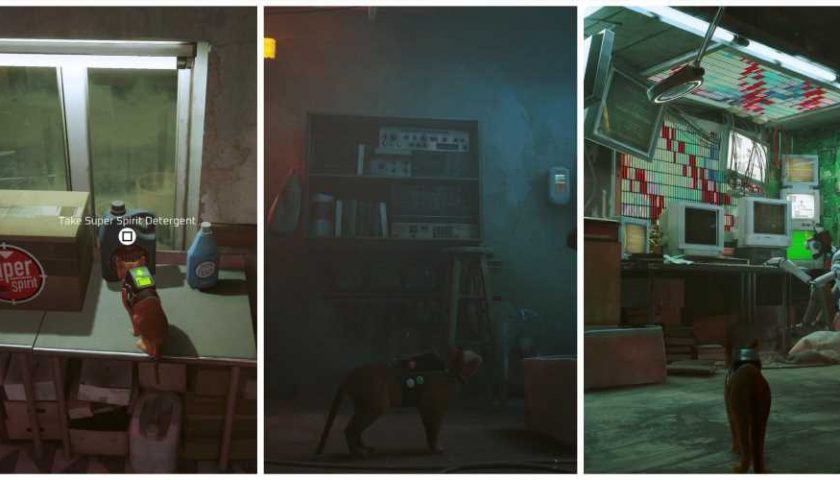 Have you ever wondered what it’s like to run around a neon city as a cat? No? Well, you won’t have to worry about that again with Stray. After falling down the depths below, an orange tabby explores a sealed city infested with flesh-eating organisms and populated by robotic individuals known as Companions. In what started as simply trying to reach the surface to rejoin your cat pals, Stray turns into an emotional quest to help a new civilization rise.

The cat’s journey is full of dangerous obstacles like Zurks and Sentinels, but some puzzles require a bit more brain power. After helping Momo attach the transmitter to the top of the tower to boost the signal to reach the Outsiders, B-12 and the cat need to fix a tracker to find Doc. This guide will help you locate the tracker and tell you how to fix it. 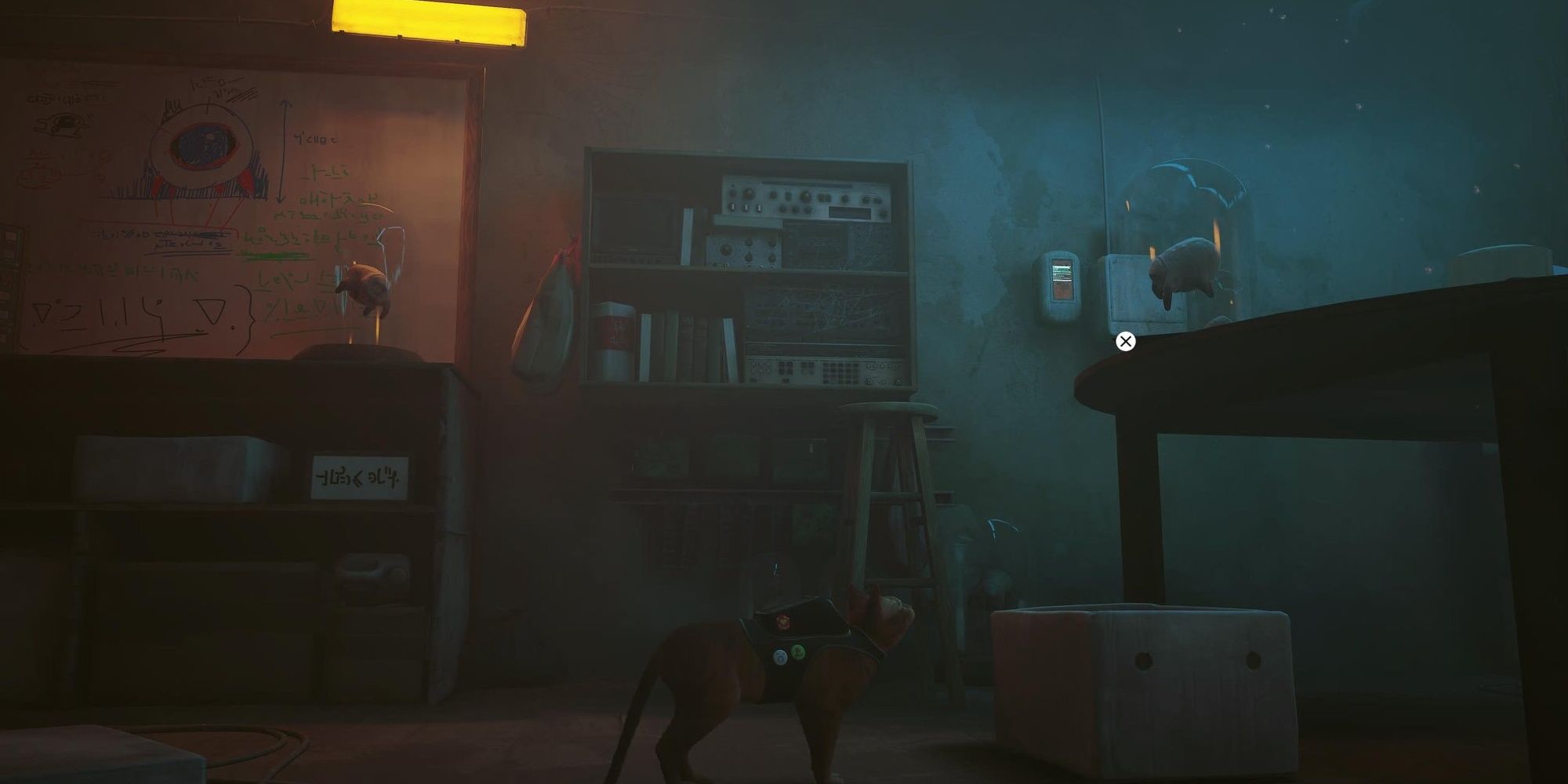 Once you’ve attached the transmitter to the tower, you’ll take the pulley system back down to the Slums. When you return to Momo’s house, the Companion won’t be home but a note on the TV will direct you to the Duffer Bar. Leave Momo’s house via the window and make your way to the bar; if you’re standing in front of the Guardian with the music-playing Companion on your right-hand side, walk forward down the stairs toward the red neon sign and you’ll find the bar. Momo will be waiting for you just outside the door.

Momo will briefly get a signal from Zbaltazar, who instructs them to travel through the Sewers to reach them. After the signal dies, a Companion named Seamus says you’ll never survive the Sewers and leaves the bar. It turns out, Doc is Seamus’s father, and the Companion feels betrayed, left behind, and depressed by his father’s disappearance.

Momo suggests following him to Seamus’s apartment to ask for help in locating his father, but the Companion won’t answer the door. Momo finds a small opening for the cat to fit through and tells you to show Seamus Doc’s old notebook. According to the notebook, there’s a secret room inside the apartment. Jump on the counter with the photos of Companions and interact with them to knock them down. The photo on the left will reveal a hidden keypad behind it. To the right, there will be a photo of Seamus and Doc that will have a message behind it that says “Time Will Tell.” Turn around to see four clocks on the wall above the couch; read the time on each clock to figure out the code for the keypad (it’s 2511).

Once inside the room, search around to learn more about Doc’s weapon called the Defluxor. Jump on the stool and then the shelf that’s located to the right of the enclosed Zurk. Knock the box down to pick up the Broken Tracker and show it to Seamus. Seamus tells you Doc used the Tracker to keep tabs on his location and suggests maybe we can reverse engineer it to reveal Doc’s location. 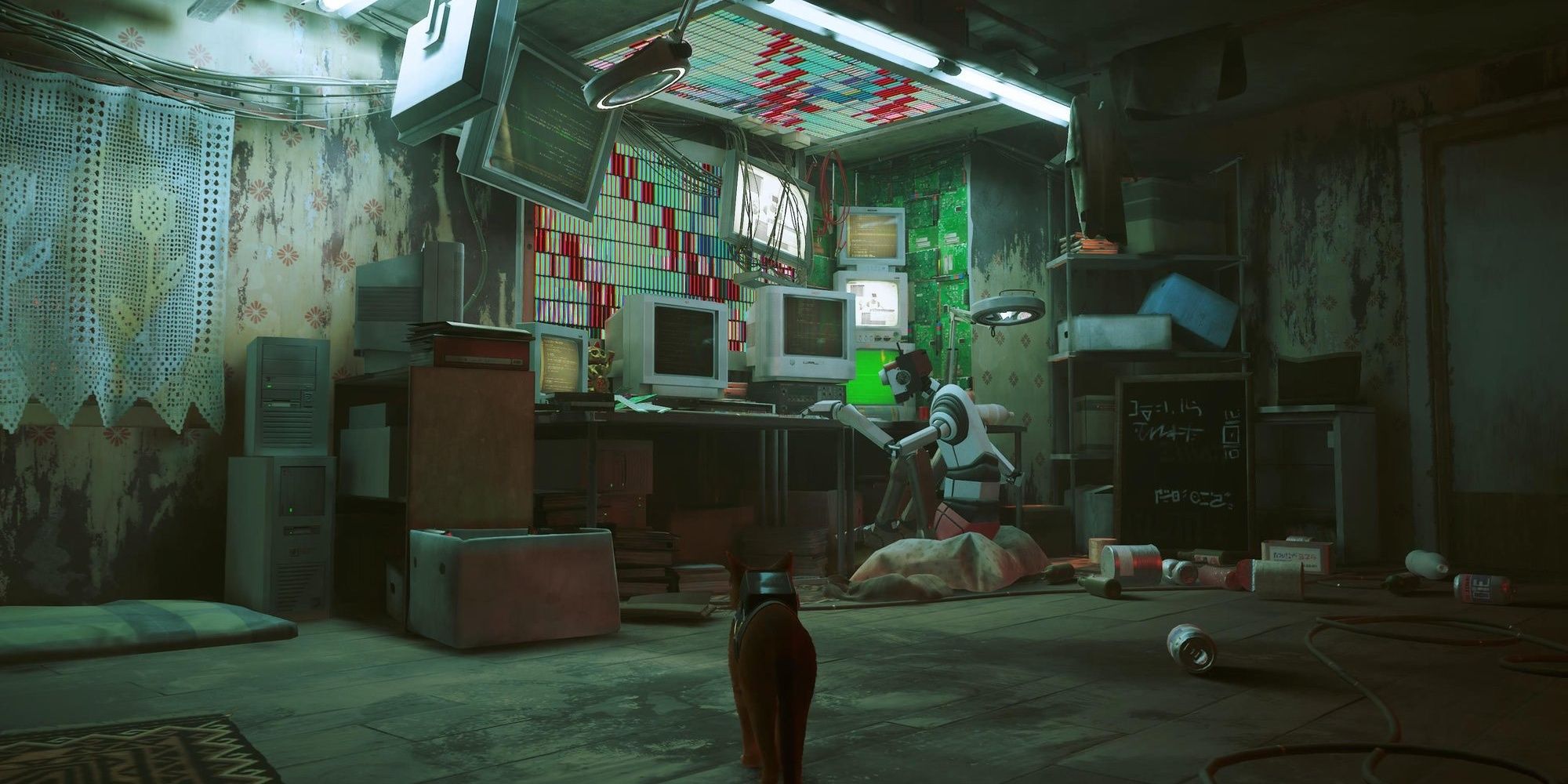 Return to the bar and show the tracker to Jacob the bartender. He’ll tell you that a Companion named Elliot would be able to help fix it. Elliot lives just left of the bar, near Grandma’s shop. When you exit the bar, turn left. You’ll see a signpost that says Elliot Programming to the right. The door will be to the right of a pair of Companions sitting on the curb. Scratch the door to have Nestor open it and walk past him to enter the shop.

Before you head upstairs, be sure to grab the music sheet on the wall directly in front of you when you enter.

When you head upstairs, you’ll find Elliot sitting at a computer. He’ll say that he can repair the tracker but he’s trembling and won’t be able to use his keyboard. Elliot requires some sort of warm blanket to stop the trembling. Earlier, you may have spoken to a Companion named Teddy that brags about having a warm scarf from Grandma. Exit Elliot’s Programming and turn right to find Grandma. She’ll tell you that she can make you something warm, but needs some Electric Cable.

Make your way to the Companion merchant named Azooz, located to the left of the Guardian. They’ll have Electric Cable to trade you in exchange for Super Spirit Detergent. Remember when you took the can down from the rooftops and saw the pair of Companions tossing paint cans to each other? Return there by jumping on top of various wall fixtures in an alleyway near the bar. Talk to the Companion that’s throwing the paint cans among the weeds. Vapora will say they need to focus so they don’t drop another bucket…except that’s exactly what we want. Interact with Vapora and meow right when they’re about to throw the can so they’ll lose their grip and the paint will spill in front of the laundry mat.

Jump down to the street below and walk past an angry Kosma who’s cleaning up the paint. Right when to enter the laundry mat, turn left and jump on the table with the cardboard box that says Super Spirit. You’ll find the Super Spirit Detergent here. With the detergent in hand, head back to Azooz to make the trade for the Electric Cable. With the cable, return to Grandma who will make you a poncho. Take the poncho back to Elliot and now that he’s all wrapped up, the Companion will fix the tracker and you’ll be one step closer to finding Doc.