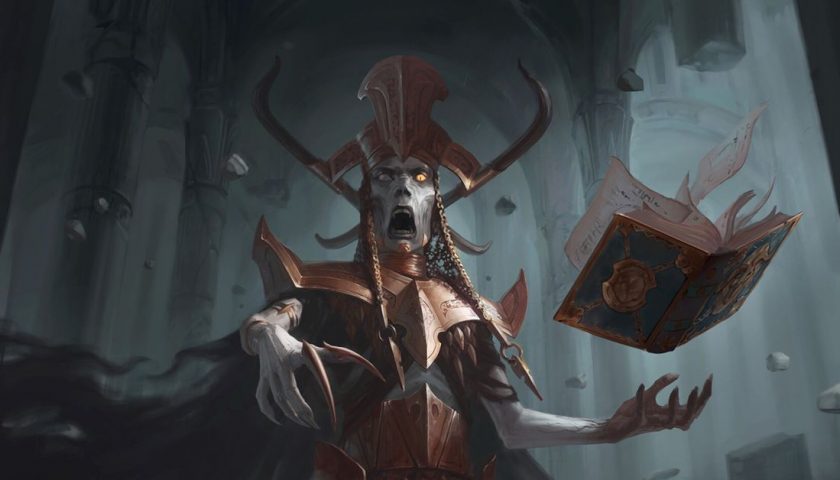 The first official trailer for Stranger Things season 4 dropped on Tuesday, to the delight of diehard fans. Suddenly all the drips and drabs of information delivered by Netflix, over the past few years, started to make sense. Oddly enough, the biggest piece of the puzzle was actually released late last year, in the form of season 4’s episode list. And it invokes the name of one of Dungeons & Dragons most storied villains: the sorcerer turned god known only as Vecna.

Tuesday’s trailer seems to point to a mysterious, malevolent force that has been sitting behind the scenes in Hawkins, Indiana all along. At the bottom of that theoretical pyramid of power are the dog-like demogorgons from seasons 1 and 2. Those, in turn, are controlled by the massive and powerful mind flayer from season 3. Sitting above them all is another, unnamed entity given voice for the first time in this new trailer.

“You’ve broken everything,” laments the voice. “Your suffering is almost at an end.” Cut to a rotting corpse, held together by filaments of gore and lit by an angry red flash. “You have lost,” it concludes.

Add in the fact that season 4, episode 2 is titled “Vecna’s Curse” and we’ve pretty much found season 4’s big bad.

Vecna was a sorcerer who turned himself into an undead abomination known as a lich only to eventually ascend to godhood. He was first introduced to D&D way back in 1976 with the publication of Dungeons & Dragons Supplement III: Eldritch Wizardry, written by Gary Gygax and Brian Blume. As historian Shannon Applecline indicates in his product history at DriveThruRPG, his addition to the D&D canon was likely the work of Blume alone. Also of note is the fact that Vecna is an anagram for Jack Vance, a science fiction and fantasy author whose novels inspired the conceptual framework for how magic works in D&D.

Vecna originally entered the canon only as the mysterious source of two different artifacts. The Hand of Vecna, “a dried, shriveled and blackened hand, such as could have been caused by having been burned,” turned its users evil and had a number of difficult-to-control powers including (but not limited to) levitation and a spell known as Finger of Death.

The Eye, on the other … hand … was said to “glitter much in the same manner as the eye of a feline.” Among its powers was a particularly rare spell called “clairaudience,” which allows the user supernatural hearing and the ability to blink in and out of reality. There’s a catch, of course: In order to use the Eye of Vecna, users had to permanently graft it to their own skull, making its powerful blessings a curse that could not be removed.

The Hand and Eye of Vecna are available to purchase, for a nominal fee, from WizKids.
Image: WizKids

“THE EFFECTS OF THE EYE ON THE USER MAY NOT BE ALTERED IN ANY MANNER,” states Eldritch Wizardry in all caps, “EVEN BY WISHES.”

Vecna has appeared several more times throughout the canon of D&D, including in the 5th edition Dungeon Masters Guide where he appeared as a part of a sample D&D pantheon for would-be Dungeon Masters to use in their world. But he appeared most recently as a god in Critical Role’s Vox Machina storyline. With the help of another god, called the Raven Queen, Grog Strongjaw (Travis Willingham), Keyleth (Marisha Ray), and their allies helped to drive Vecna’s malevolent spirit from the Material Plane — but he was not permanently destroyed.

So is it actually Vecna pulling the strings behind the scenes, or is it someone who just acts and behaves a lot like Vecna? We’ve reached out to D&D publisher Wizards of the Coast to learn more. But, since the lich-turned-god isn’t included in the game’s open source ruleset Netflix would have likely needed special permission to use his name.

This officially-licensed D&D sourcebook set in the world of Exandria makes mention of Vecna, The Whispered One and gives a few additional notes on playing him at the table.