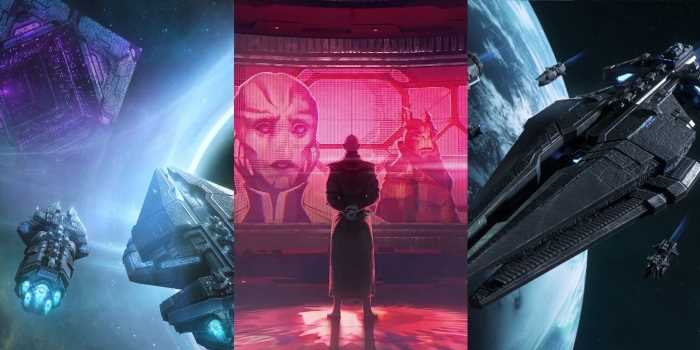 Stellaris is a grand strategy game from Paradox Development Studio. Players can create their civilization, discover anomalies, and build their empire across a galaxy with remarkable visuals and complex customization. They should watch for insidious threats along the way, though, which is where espionage comes in.

A major gameplay option has been introduced in the 2021 expansion, letting the player remove their noble laurels. Among the changes is a new way of making First Contact with alien civilizations: espionage. As usual, the player uses diplomacy to improve their position in the galaxy, but some threats require a more deft touch away from prying eyes. 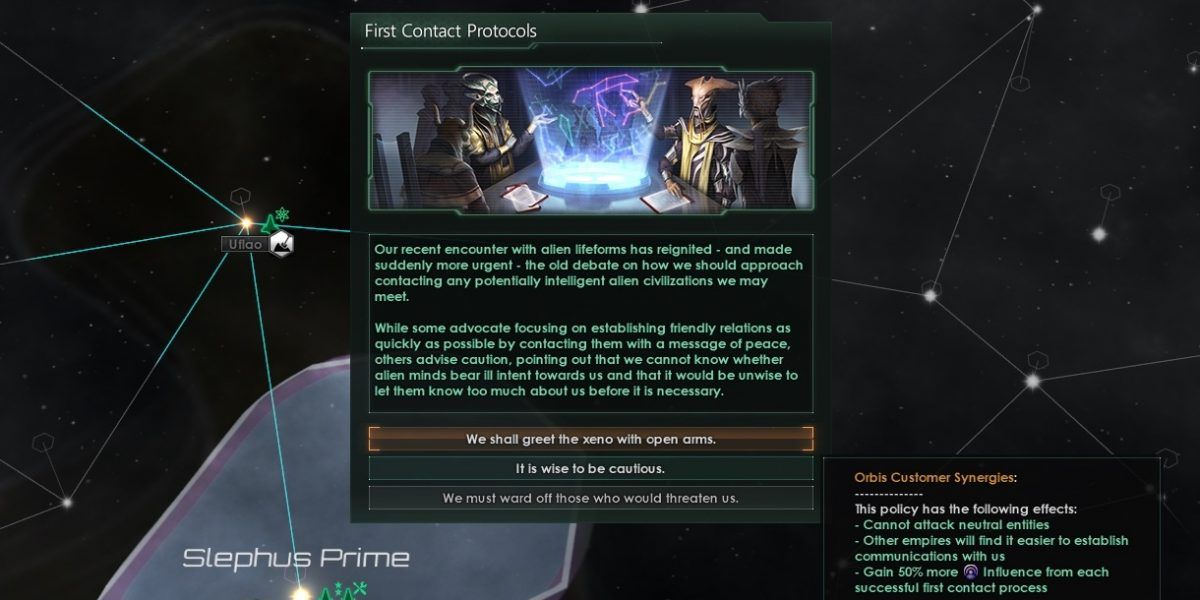 Originally, when contact was made with a new civilization, the player was told the size of the newly-met empire and the details of their relationship to other leaders. Now, the process is more of an investigation, taking a little more time and adding a layer of mystery to the narrative.

The difficulty of making that first contact and learning more about other leaders will depend on the friendliness of the target and the ease of translating their signals.

Fog Of War Is Now Improved 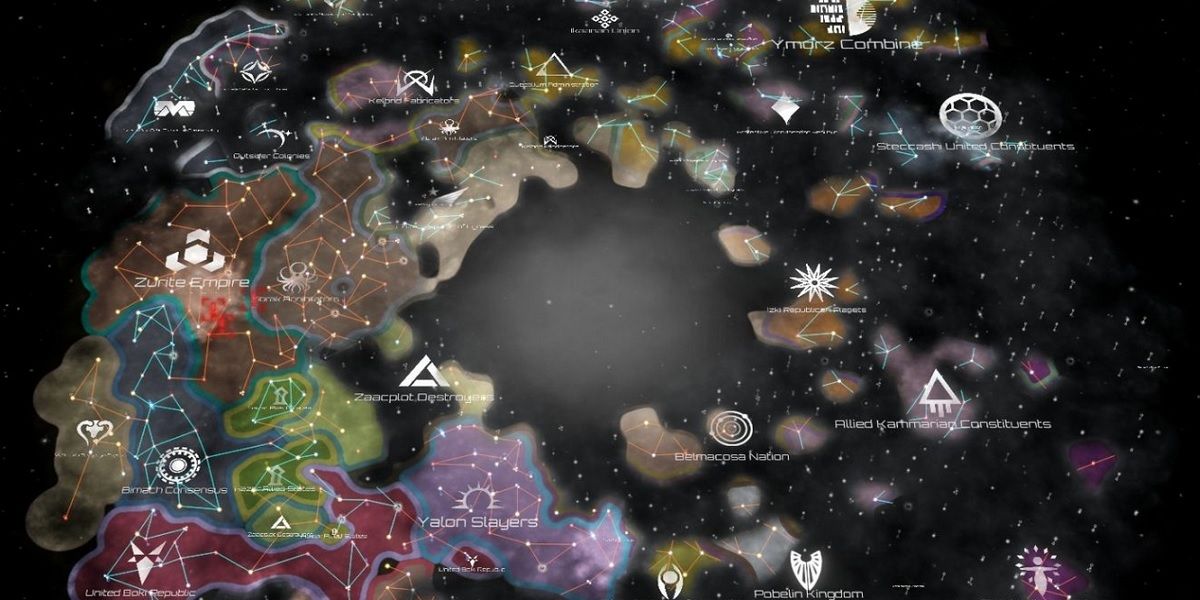 One of the espionage features increases the “fog of war,” which clouds the stats and borders of any potential allies or foes. With the stats now hidden, the need for intel is more important than ever before, as an empire’s rapid advancement could mean trouble for your own.

The more intel a player has, the less likely they are to be surprised by a huge threat a planet or two over. 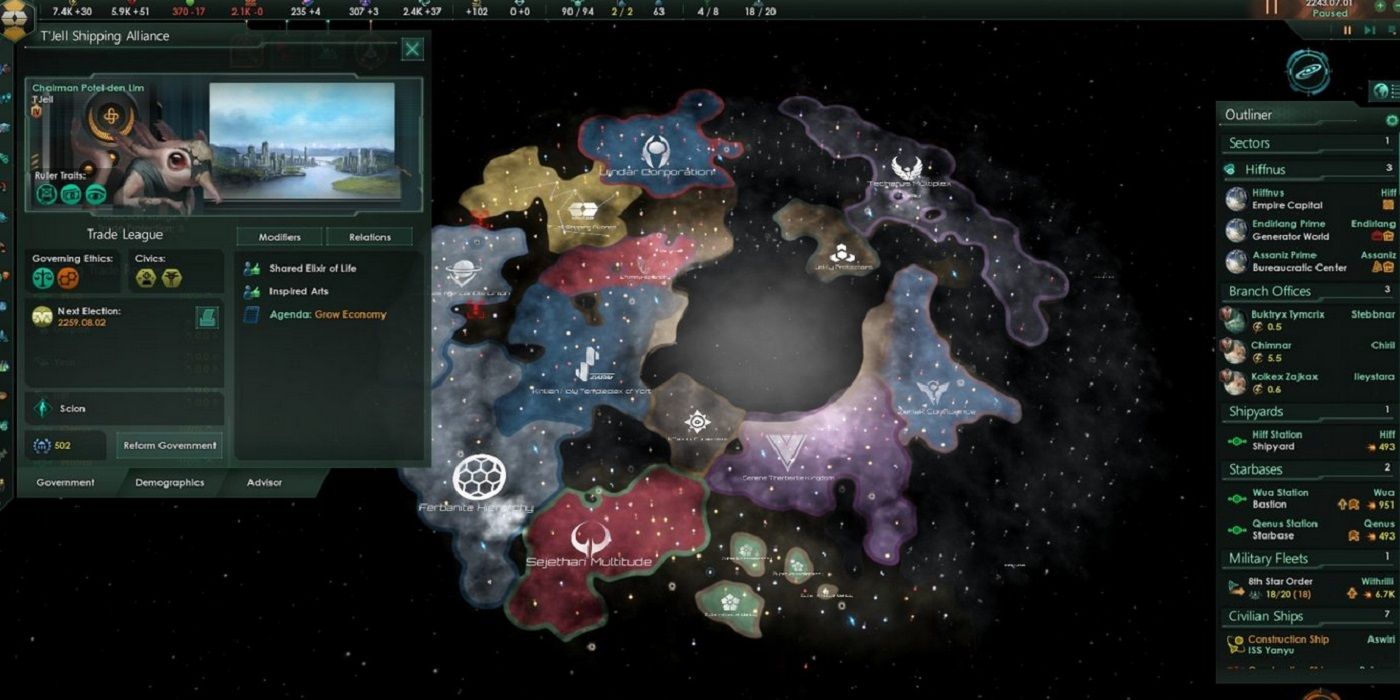 Gaining information on standoffish civilizations becomes a driving force for exploration in Stellaris. A player can rely on a take on real-world history to know the best leaders for a new campaign in a game franchise like Sid Meier’s Civilization, but the reaches of space are  cold and unfriendly indeed.

Intel reports must be acquired. They come in the form of reconnaissance that includes information on military positions, the capability of enemy technology, systems of government, economic status, and diplomatic ties to the rest of the galaxy. Intel must be kept up with, as stale information could hinder any potential for advancement against an alien empire.

Envoys Are More Important Than Ever 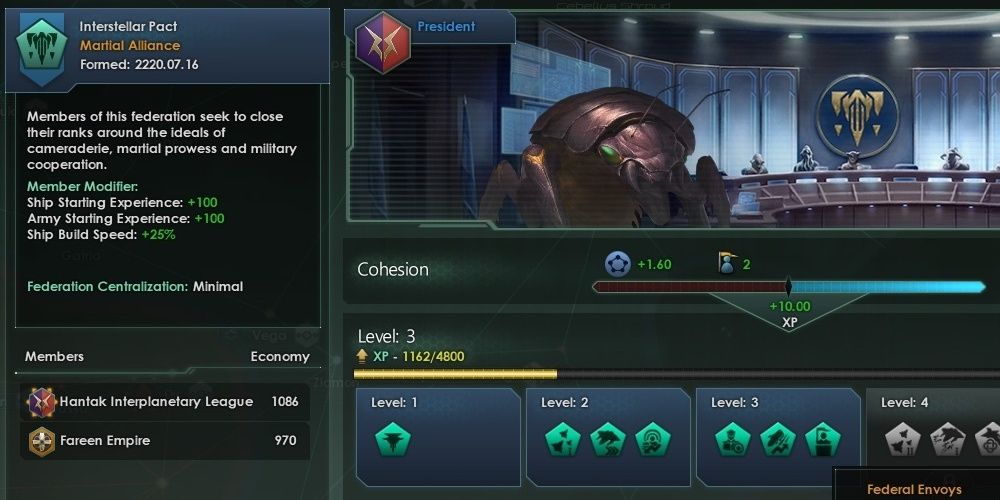 If you’ve played a Paradox title before, envoys should be a familiar concept. Give Europa Universalis IV a shot for some experience with earth-bound envoys, but make sure you know which nations are best to start with (a decision that can be crucial to success in that title).

In Stellaris, an envoy is sent to a new civilization to build a spy network, and that envoy becomes the player’s spymaster. The network can grow quickly depending on the size of the empire, but be sure to keep in control of the information flow: networks without a spymaster will deteriorate and lose power. 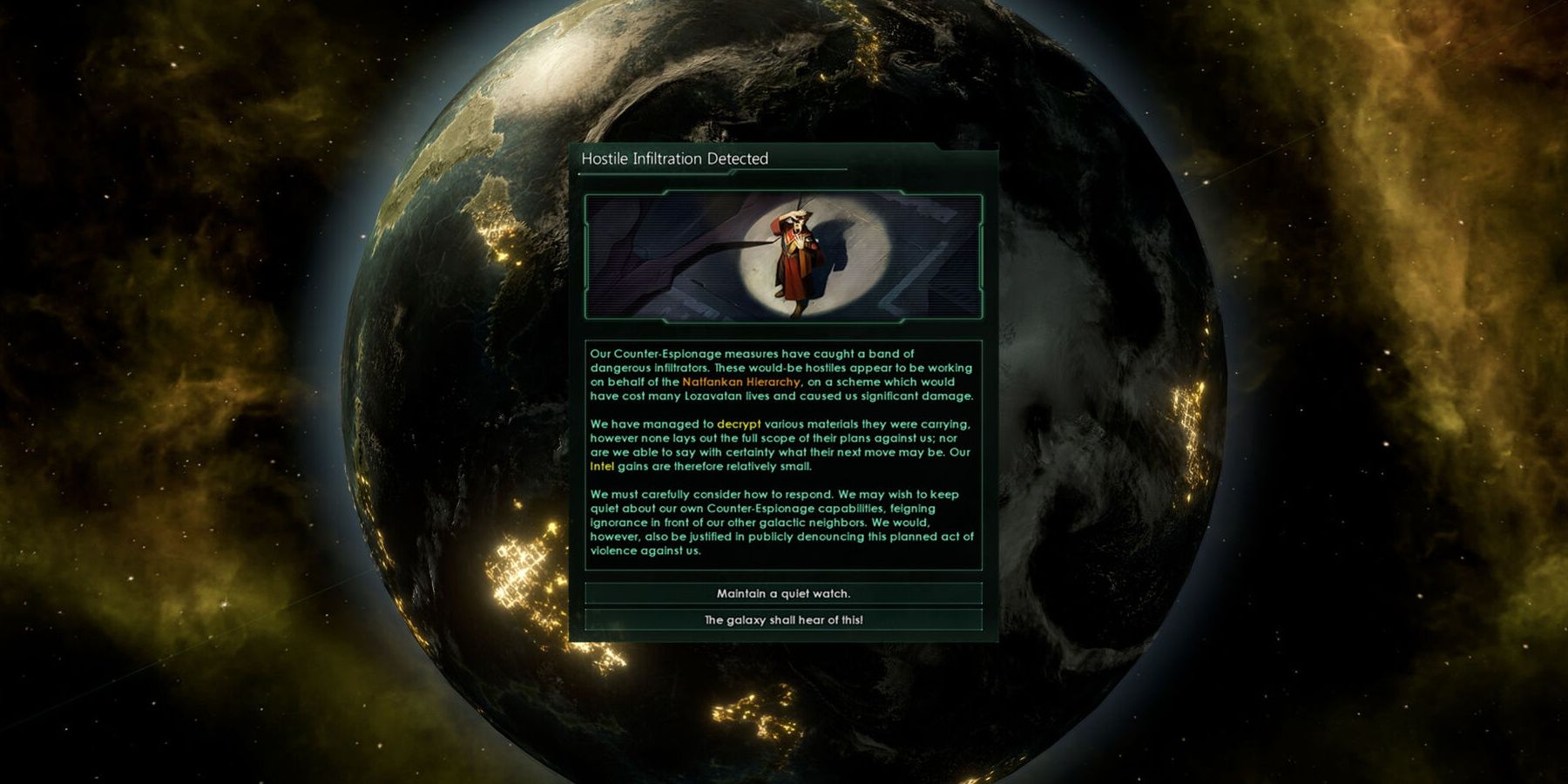 The level of a spy network is tracked by infiltration points. Infiltration points determine which operations your agents can carry out and the likelihood of their success. The spy network will spread quickly after its inception, but requires timed intel reports and active spymasters to maintain.

There is a level cap for spy networks, but certain civics may increase the spymaster’s threshold if a threat needs immediate neutralization. The finer points of the infiltration level may be updated down the line, as Paradox (which enjoyed healthy growth in 2020) continues to tweak the game.

Encryption Versus Decryption Is Another Vital Factor 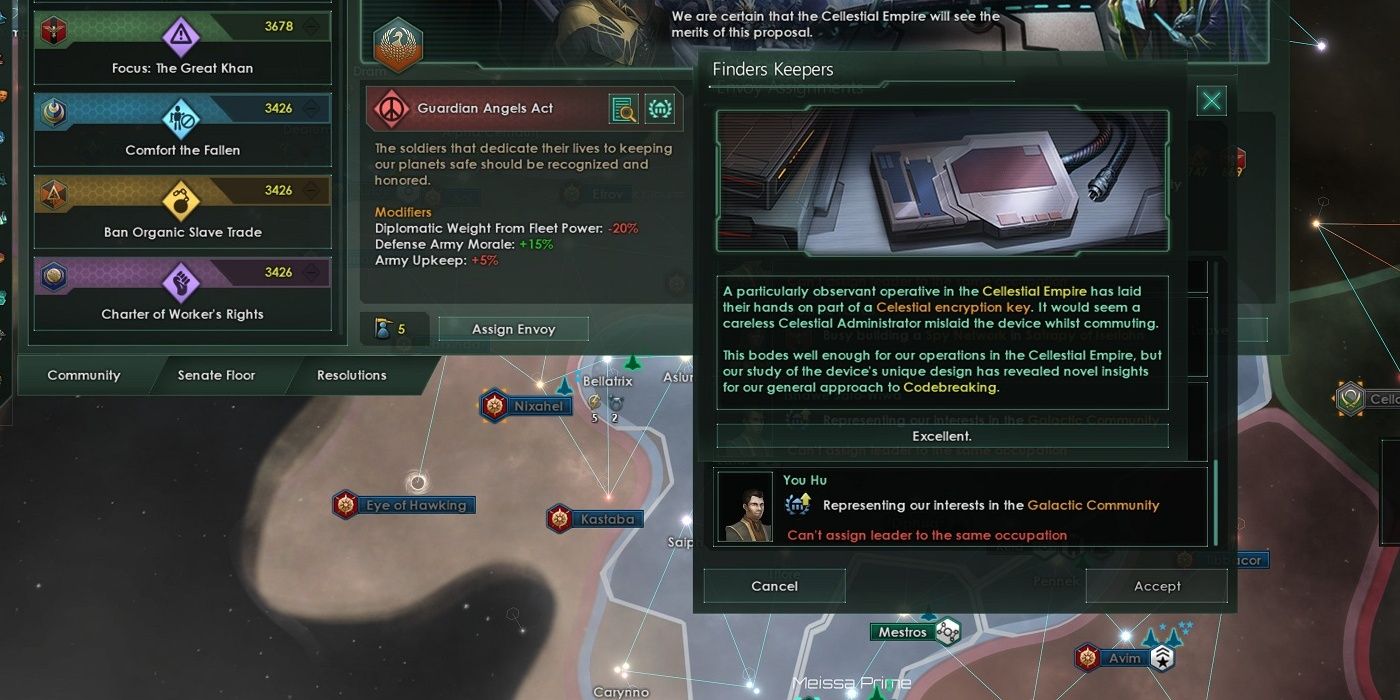 The success of covert operations depends on a newer element of the game: encryption and decryption. As players might guess, a spy network will expand faster if the player’s decryption level is higher than the target’s encryption level.

Additional civics and related technologies improve the player’s rating if some empires’ encryption levels are too high.  Be sure to use caution when spying on civilizations that specialize in machine intelligence, though.

You Must Be Sure To Get To Know Your Assets 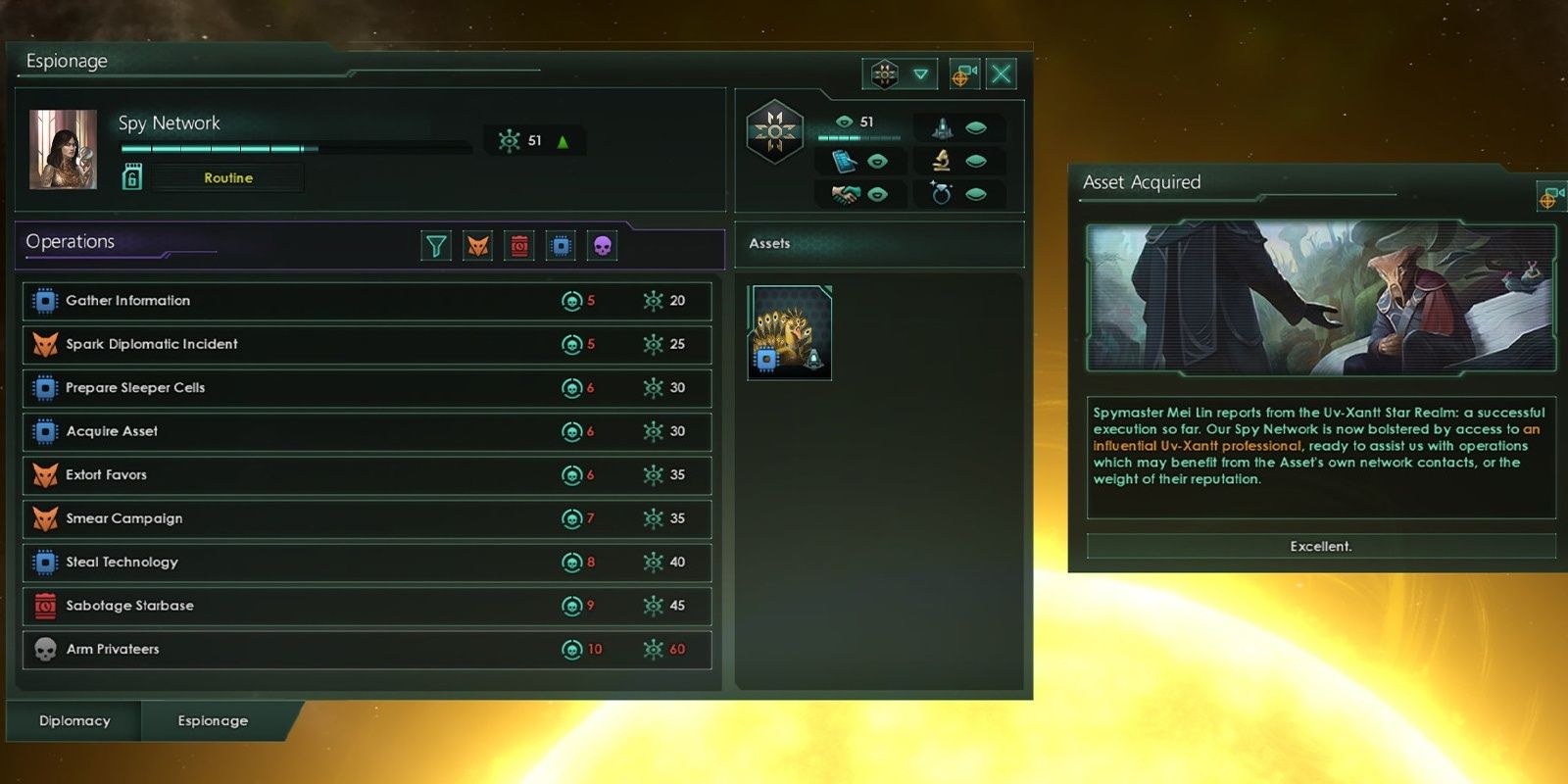 Assets are any resource that can help a player from the inside. Eladrin, a Stellaris Game Designer, describes assets as “useful pawns, hacked backdoors, deviant drones, or… a disgruntled bureaucrat that’s been passed over for promotion one too many times.”

Some assets can also provide a special boost to spy networks and increase the level cap by five points. Whether the asset is a turncoat or a faulty security system, these are the player’s tools and potential scapegoats if things go awry. 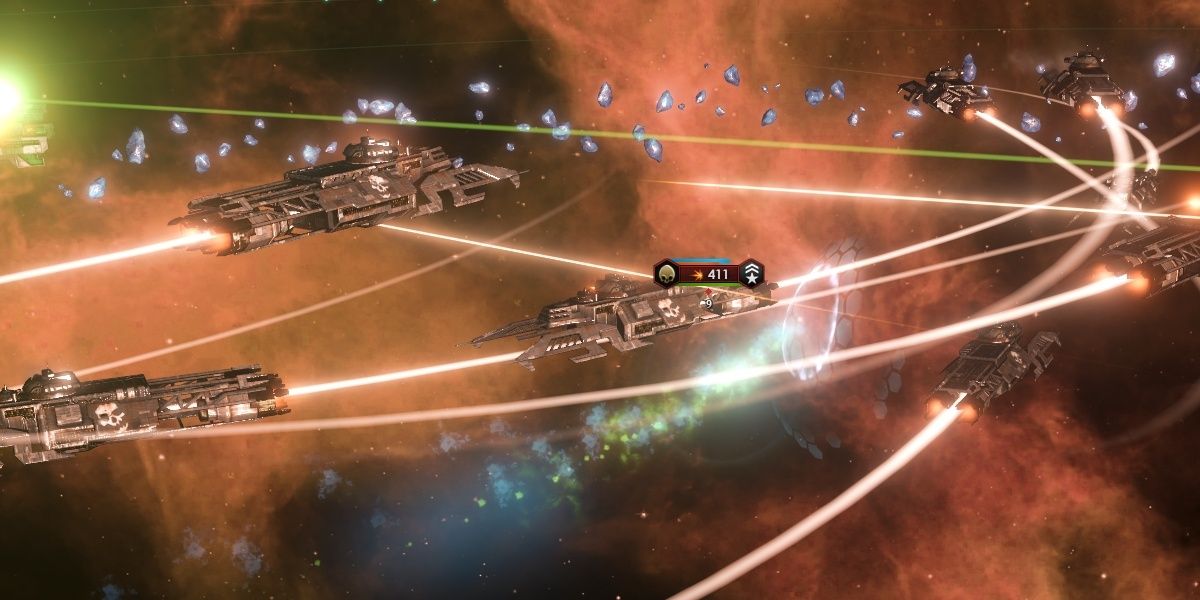 Using the infiltration level, a spymaster can run a series of operations from an established spy network. The four major operations have been categorized by the developers as Subterfuge, Sabotage, Manipulation, and Provocations.

An agent may steal technology, or perhaps an asset of some influence could cover your tracks. Or the player can arm a private militia and create a crisis (which fits the tone of the expansion). There is an energy cost and upkeep to these actions, but a successful operation will affect the infiltration level. Just don’t get too overconfident in your spymaster abilities just yet. 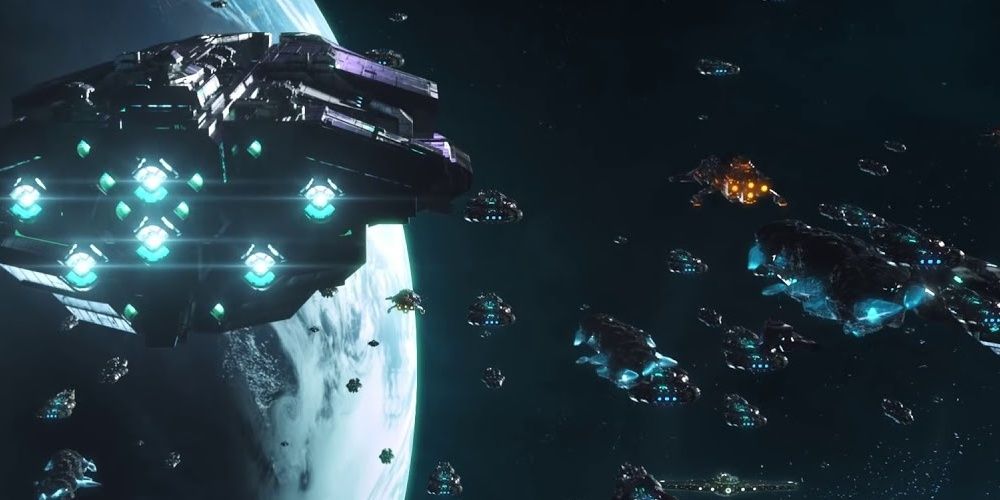 Some civics and technologies impact the counter-espionage level. The higher the level, the less likely a spy network is to run amuck. Some species are naturally gifted with counter-espionage, such as a hive or Psionic empire.

If you have the Ancient Relic DLC, keep your spymaster away from the precursor race, the Zroni, as it will prove difficult to sabotage and spy. The player should always be sure to have up-to-date intel before going on the offensive against another alien civilization. 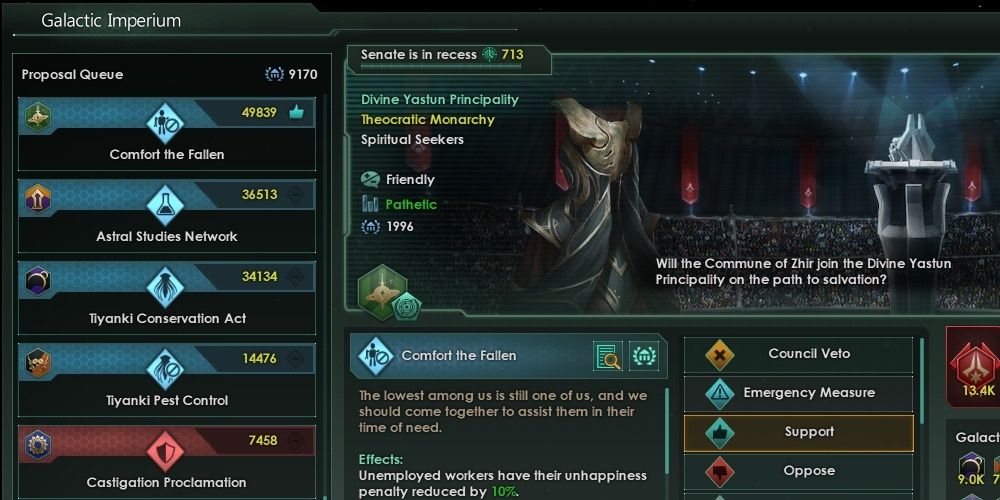 The Nemesis expansion allows the player to cause or overcome a crisis. In doing so, a Galactic Imperium may be formed, which unites the majority of the galaxy’s civilizations to fall under imperial authority.

The Imperium’s strength is derived from that authority, which can be undermined using espionage. Certain actions using the spy network can have seditious effects, and the player may end up sparking a galactic rebellion. As Star Wars fans will know, that’s always a perilous situation.