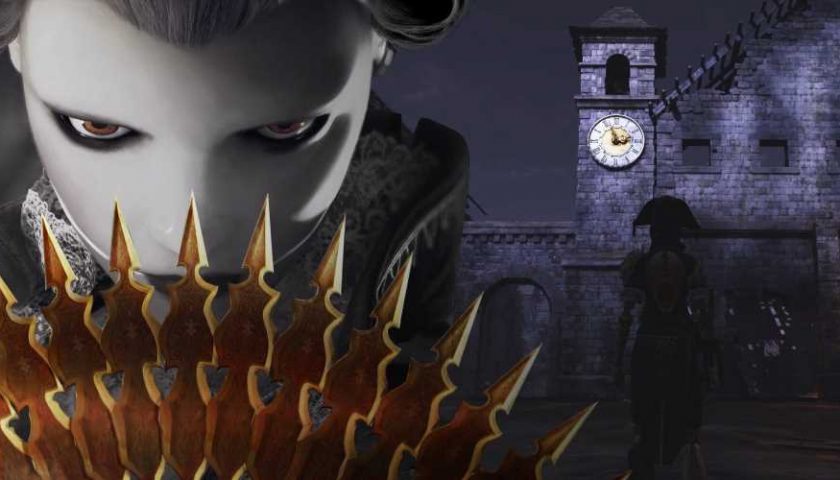 While the stages have, up to this point, gradually grown more complex, Luxembourg is easily the most maze-like of all the stages in Steelrising. It is a mess of interconnecting streets, lined with towering buildings and often with little in the way of landmarks. It is easy to get turned around and get hopelessly lost.

Thankfully, we have provided you will all the information you need to get from your carriage all the way through to the arena where you will fight the Alchemist. And, naturally, we will guide you to all the goodies along the way. Worry not, my friend, we've got you covered! 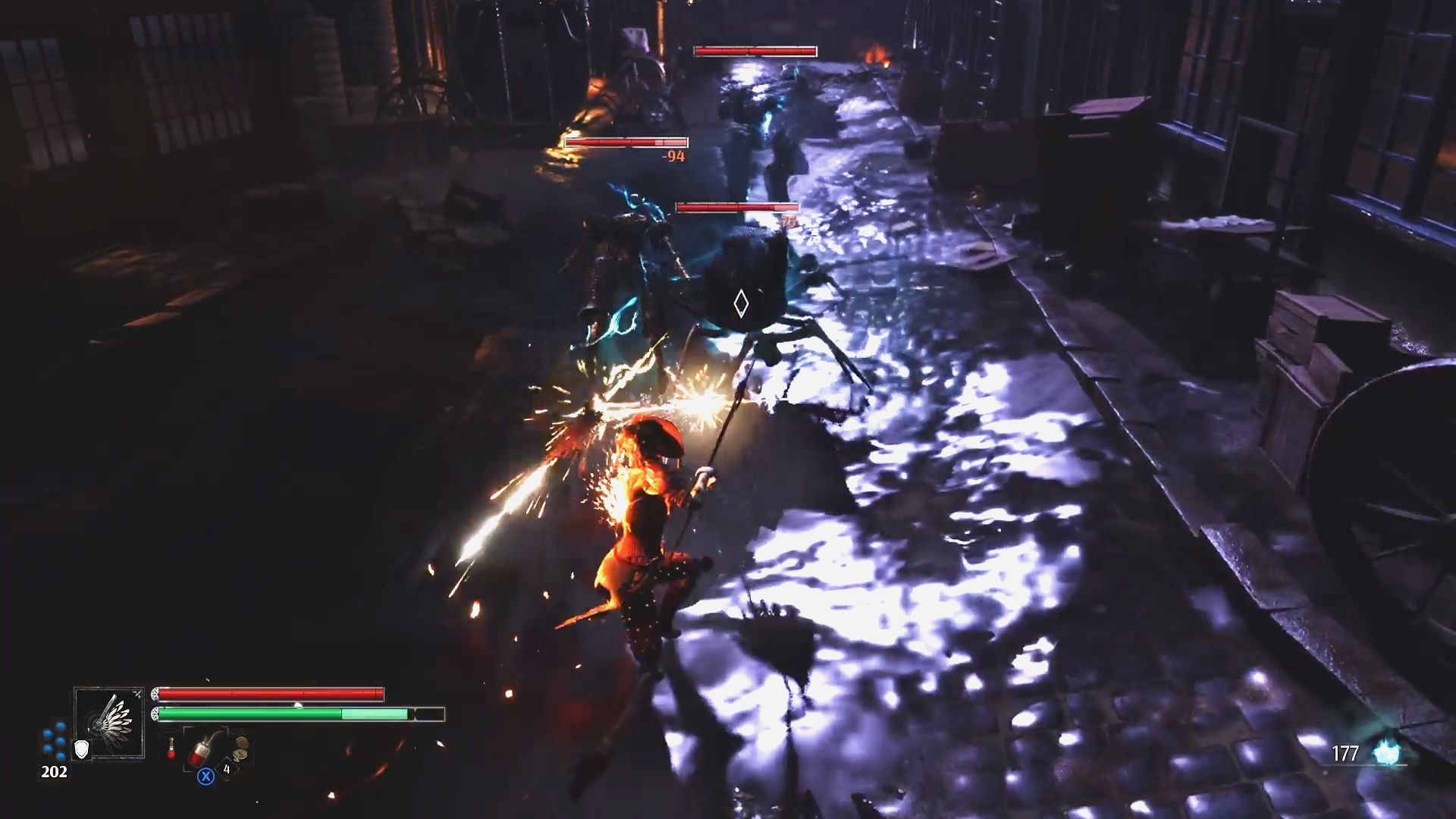 Your romp through Luxembourg with start at an intersection. The path on your right is a dead end. The path on your left is also a dead end, but it does have a Noble Spirit to grab. So, head down the center street. You will encounter a Standard Automat, a Spider Automat, and a Fencing Automat. Two of those are old-hat, but the Spider is new. You will want to take the Spider Automat out quickly, as they will generate a shield that helps to protect their allies. This cluster of enemies will line themselves up for you as they pursue you, so a fully charged attack will help clear 'em out pretty quickly. Take your first left, clear out the Fencer Automat, and keep heading straight and you will enter the Place de la Comedie

Here you will face off against the Lightning Ram, as well as another Spider and Fencer Automat. If possible, sneak up on the Spider and take it out. Otherwise, use the side street to funnel them into a line, which will help you land those charged shots on the whole group. Once you clear them out, open the chest and grab the Theatre-Francais Turban and Doublet. Once you have picked up the remaining items scattered around, head down the street that was on your right when you entered this area. You will also enter into the Quartier du Theatre-Francais.

There is another Lightning Ram at the end of the street you can take out if you like. Otherwise, take the passageway on your left. You will be greeted by a Violin-Playing Automat. These guys are similar to their trumpet-playing cousins, but they can parry your attack like the Fencer Automats. At the end of the street is a buggy; jump on top of it and hop up to the balcony above. Travel through the apartment; then, jump down to the street below. You'll fight another Lightning Ram, Spider, and Fencer.

The Lightning Ram here is totally avoidable, but keep in mind that they can drop weapon upgrade materials, and they provide 750 Anima, so it is generally worth your while to take them out.

Ruins Of The Saint-Germain Fair 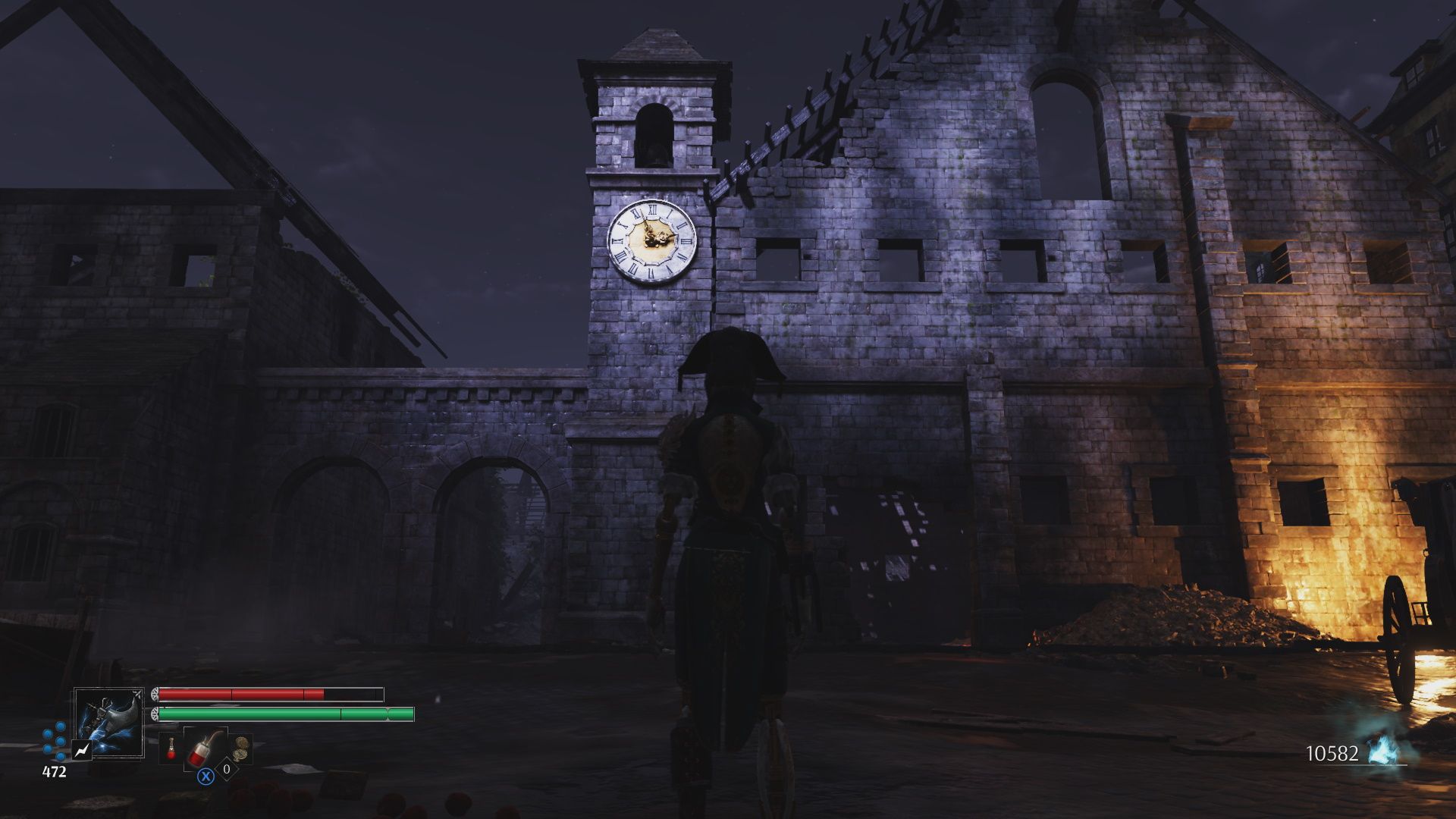 Once you enter this area it will seem like there are a half-dozen places to go. However, all of them will be dead ends. That being said, there are plenty of items lying around, so you should still run around and grab everything. Once you are done, go back to where you entered the area, and enter into the building to the left of the one with the destroyed front-facing wall.

In the ruined building, you will encounter a Pickaxe Automat, which doesn't feel particularly different from the Axe-Wielding or Standard variants, though it does have a projectile, and, if you let it, it has a hard-hitting lunging attack. Travel through the door on your right, and you will find yourself in a room where the floor has collapsed. Run up it, clear out the Automats, and hop down to the street below.

Once you hop down, you will face off against a Forger Automat and another one of those Spider Automats. Kill the Spider first; then, take care of the Forger. Once you loot everything in the room you were in, go down the alleyway toward another ruined building. You need to use your grappling hook to get up to where you need to go, but before you do that enter the building. There will be a Snake-Bodied Automat in here waiting to ambush you. Once you take them out grab the Fulminating Grenades. 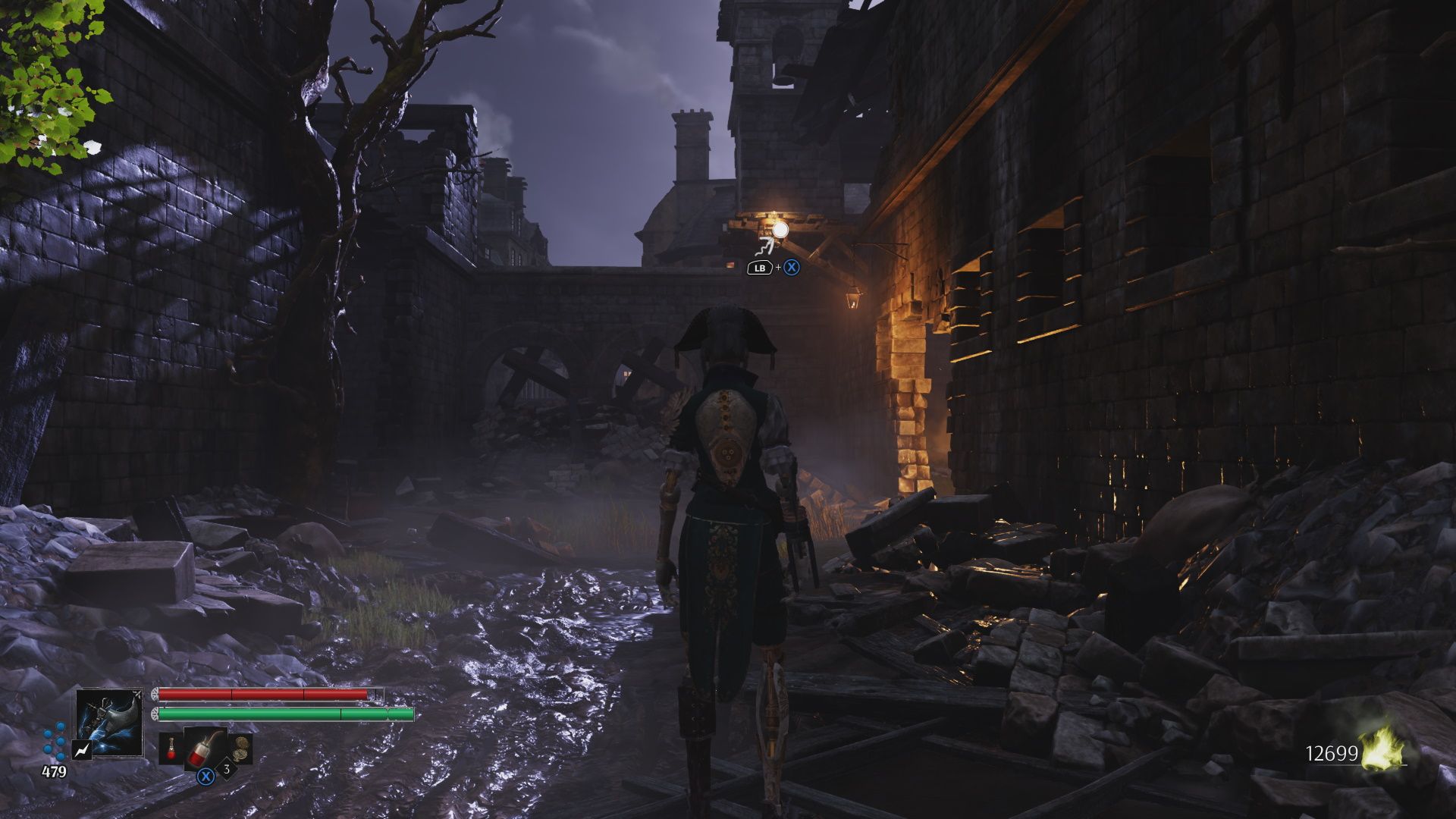 Now, leave the building, grapple hook your way to that platform above, and then use your air dash (twice) to get to the other side of this room. Drop down, and enter the building you just dropped down in front of. The two Automats on the ground are only playing dead. Make their playtime a reality and then collect all the goodies in this room. There is another Forger out here; kill them, and then enter the ruined building on the left (if your back is facing the room you cleared out with the two Automats). Jump up to the floor above; from here, use your air dash to cross over the street and into the adjacent building. 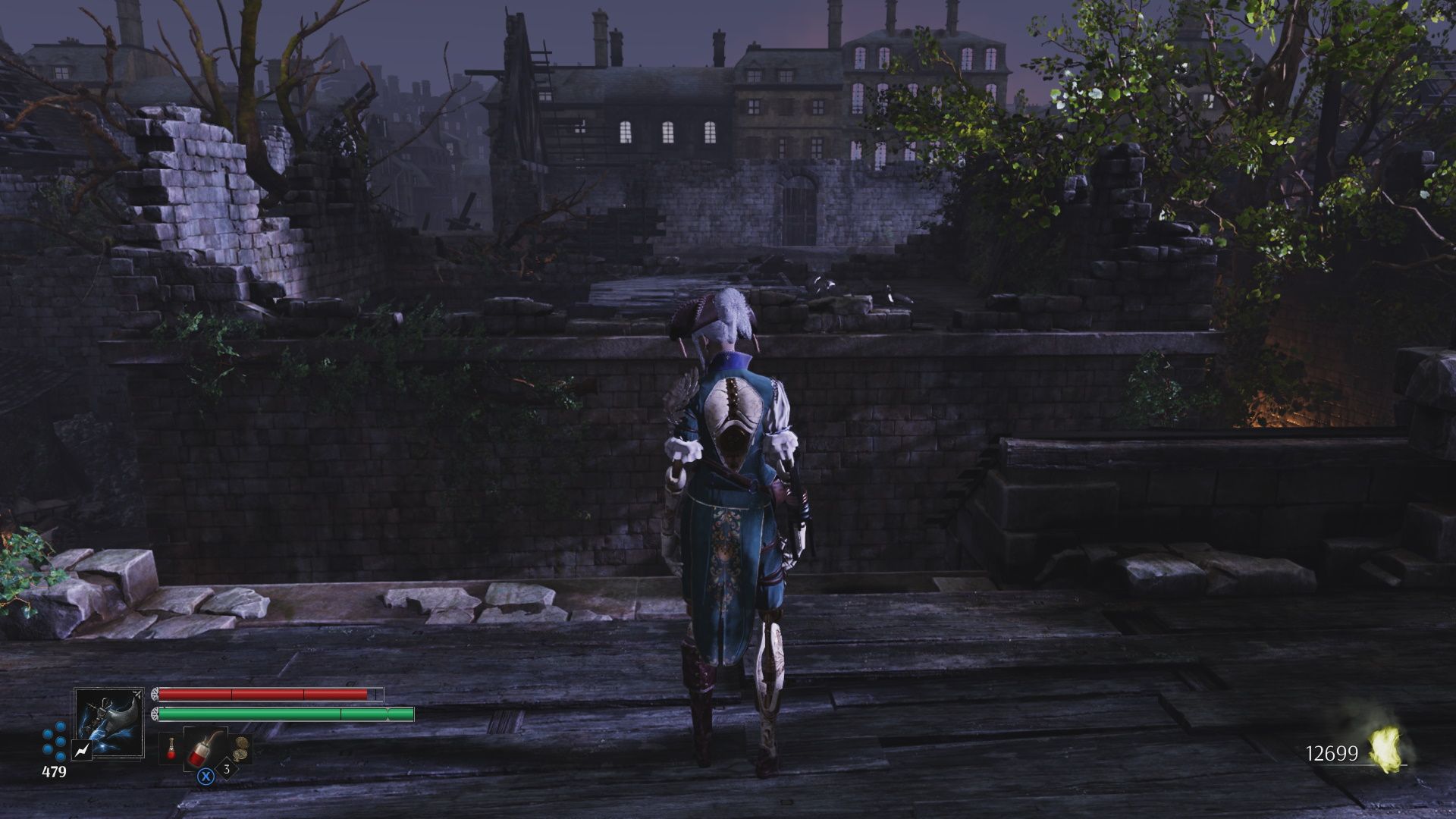 Now, run to the other side, and drop down into the street. You will now have to face two Forgers and a Spider. If the forgers are giving you a hard time, you can enter the building and use the doorframes to jam them up. This isn't foolproof, but it can be helpful in a pinch. Once you clear out the forgers, open the treasure chest and obtain the Foil And Dagger weapon. 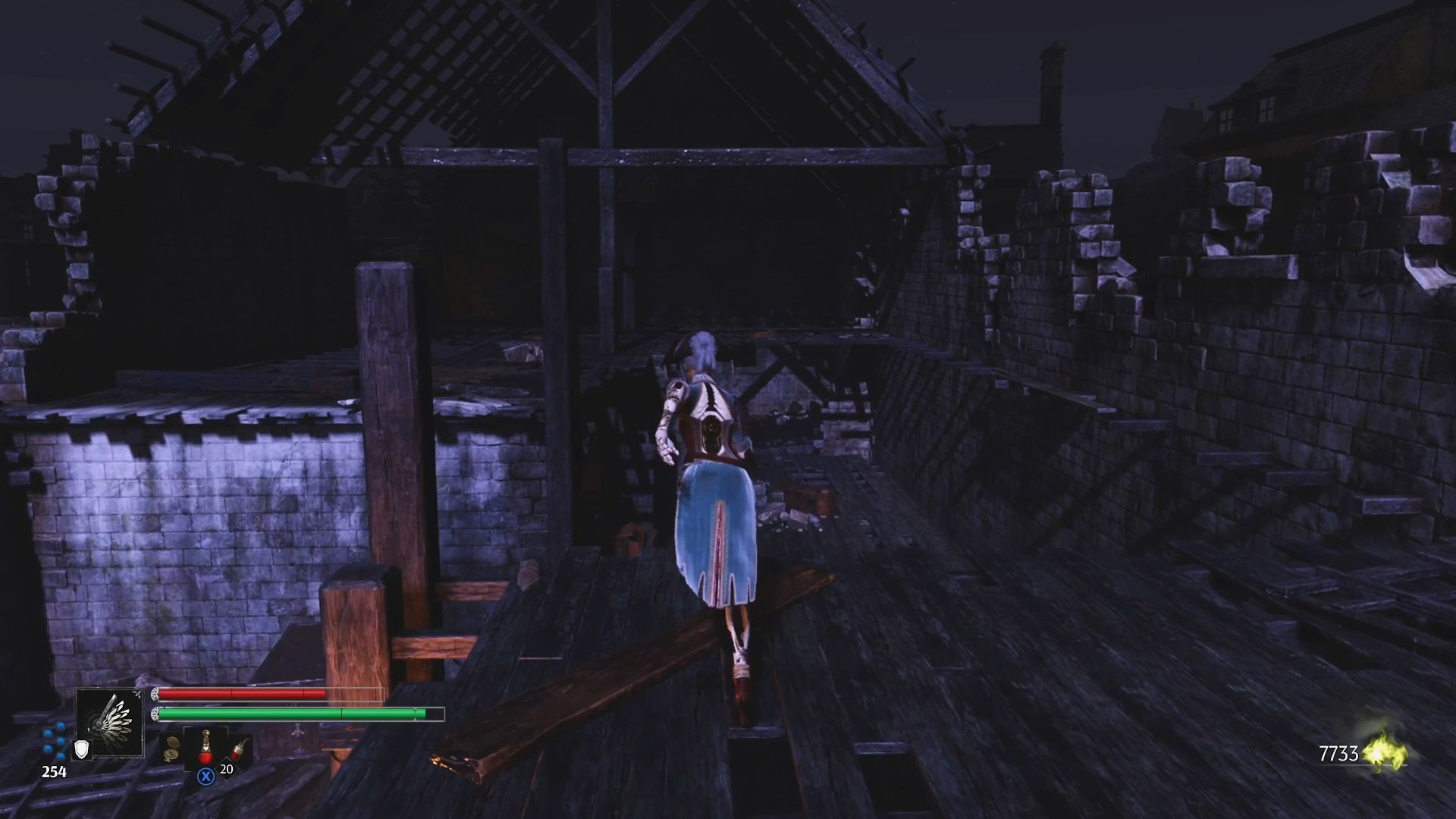 There is only one building you can enter from here, go up to the second floor and then hop up to the floor above that one. Leap across the gap to the building across the way, and follow it around. Now open up the gate for a shortcut. Enter into the building on your right, and you will be in the Quartier du Theatre-Francais again.

(Return To The) Quartier Du Theatre-Francais 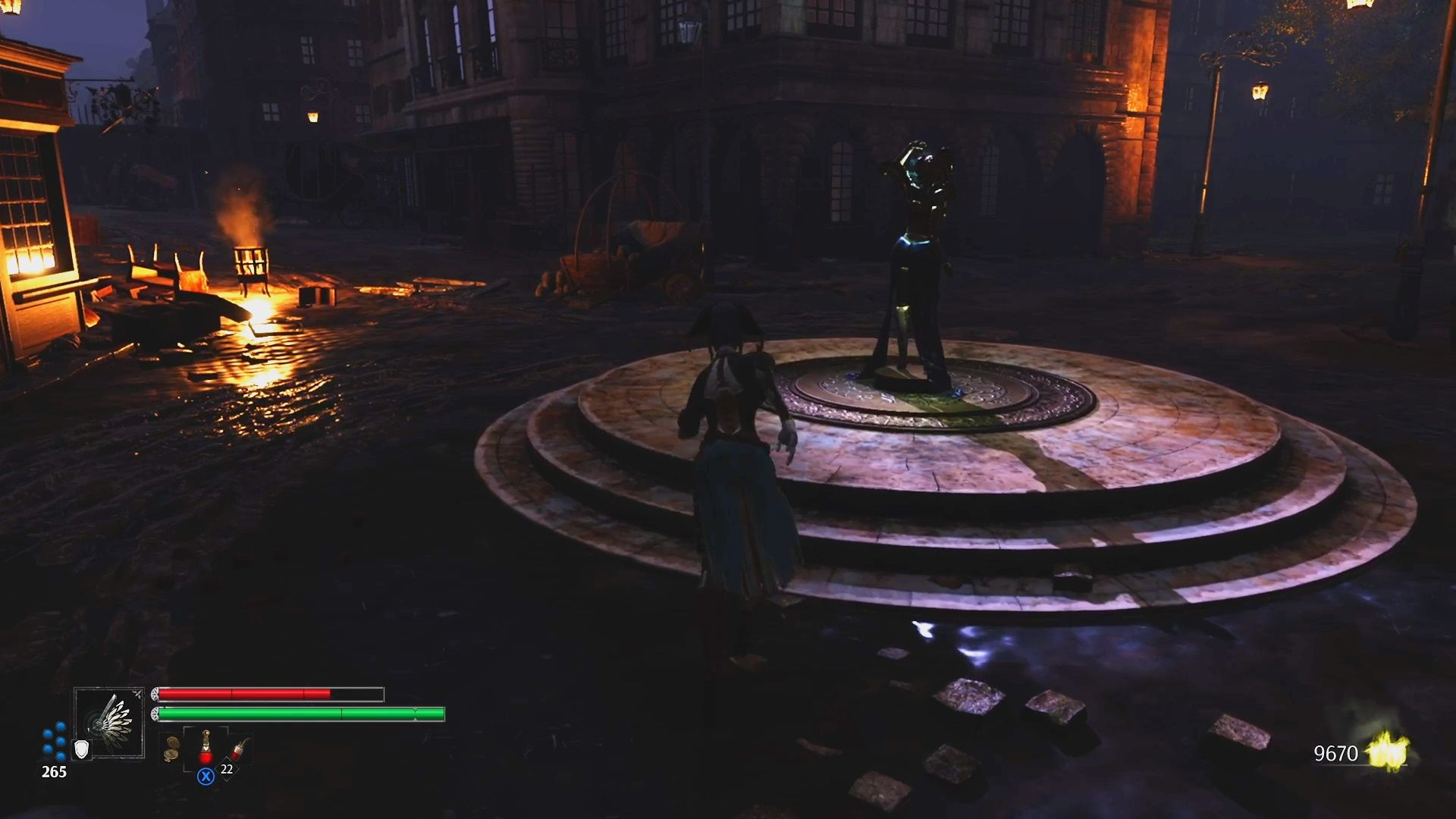 You will finally have access to another Vestal; activate it, and then start scouring the area for items. There is a Noble Spirit around the corner of one building, another Noble Spirit sitting on a balcony, there are grenades sitting on a bench, resistance vials on a corpse… you get the idea. Once you have searched this entire area, head toward the bench that is next to the Vestal. Past the bench, you will see a pathway. Enter through said pathway, and you will be in The Luxembourg Gardens. 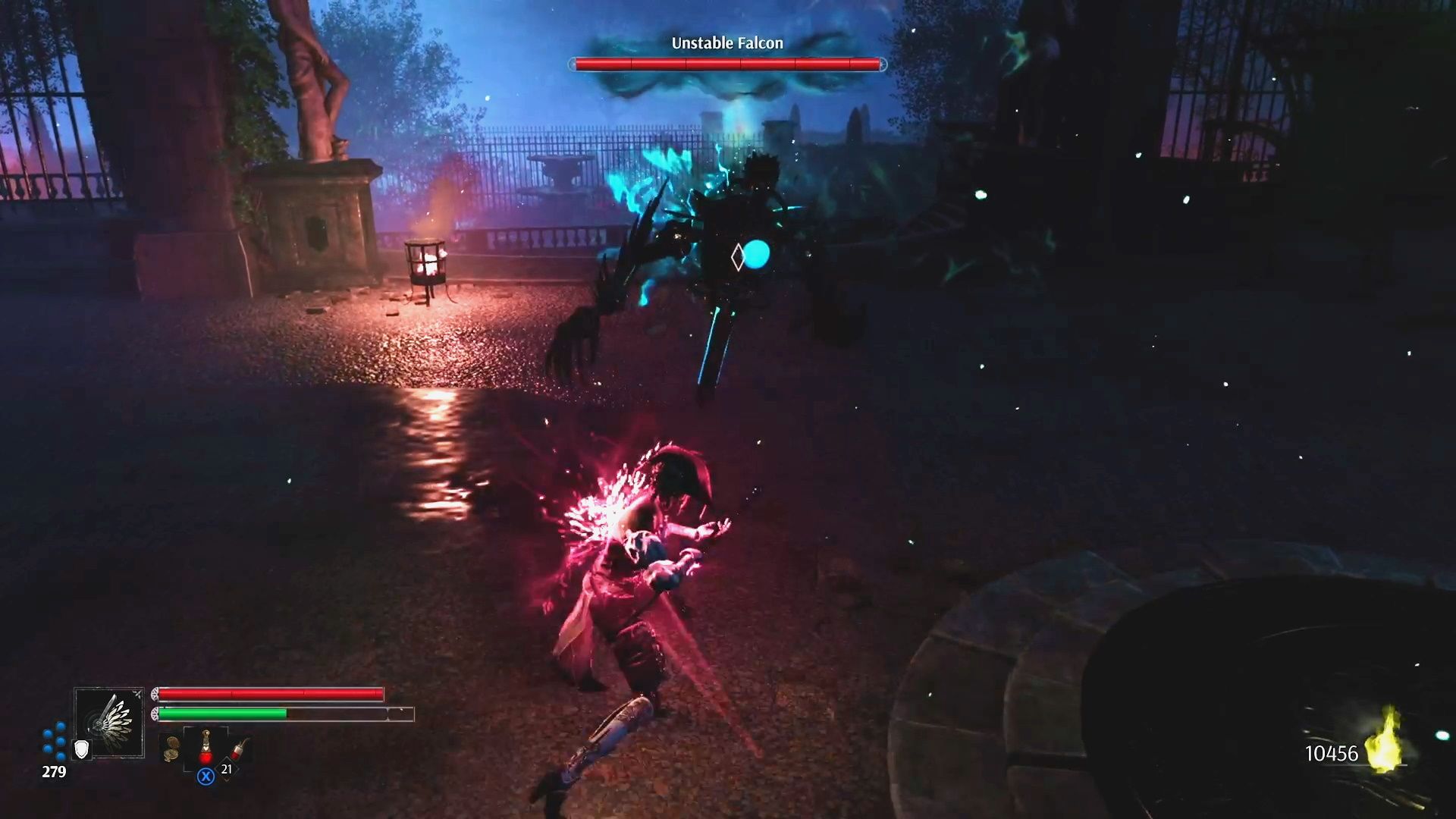 So the Unstable Falcon looks sorta familiar, right? Well, that's because this is just that "Plunging Automat" that you fought in The Tuileries. Does it have new moves? Not that we saw. Does it hit harder? Well, we played pretty sloppily, got hit multiple times, and we can't say that it seemed like this "Unstable" version of the Automat was doing any more damage than their regular counterparts. It does seem to have more life, at least. So you will have to hit it a few more times before it will die. For the sake of clarity, since the game designates it as an unstable-class boss, we will quickly cover them. 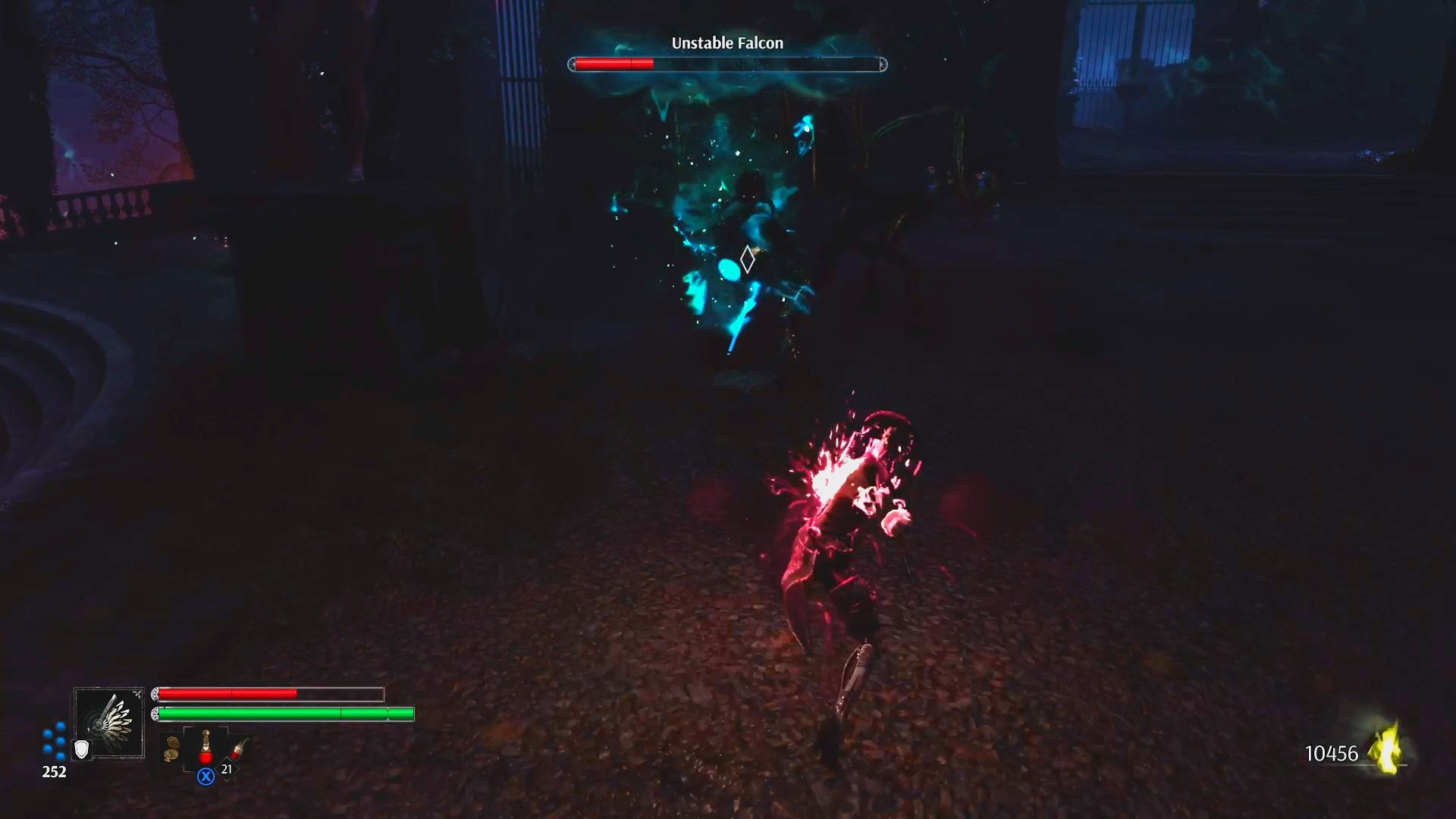 The Unstable Falcon will perform a moderately quick, but low damage dealing, swiping attack combo. It will also perform an attack where it lunges at you while spinning its arms in the air. This is the move that is most likely to clip you. Finally, the reason we had previously referred to it as the "Plunging" Automat, it will jump into the air and plunge the bottom half of its body—which is a giant spike—into the ground below. The Unstable Falcon will frequently walk into fully charged attacks. They will also be briefly vulnerable after performing their plunging attack. Otherwise, just dash behind it and wail on this supposed boss.

Once you have dealt with the Unstable Falcon, grab the Bismuth Block from its body, activate the Vestal, and you will now be able to explore the Luxemburg Gardens. 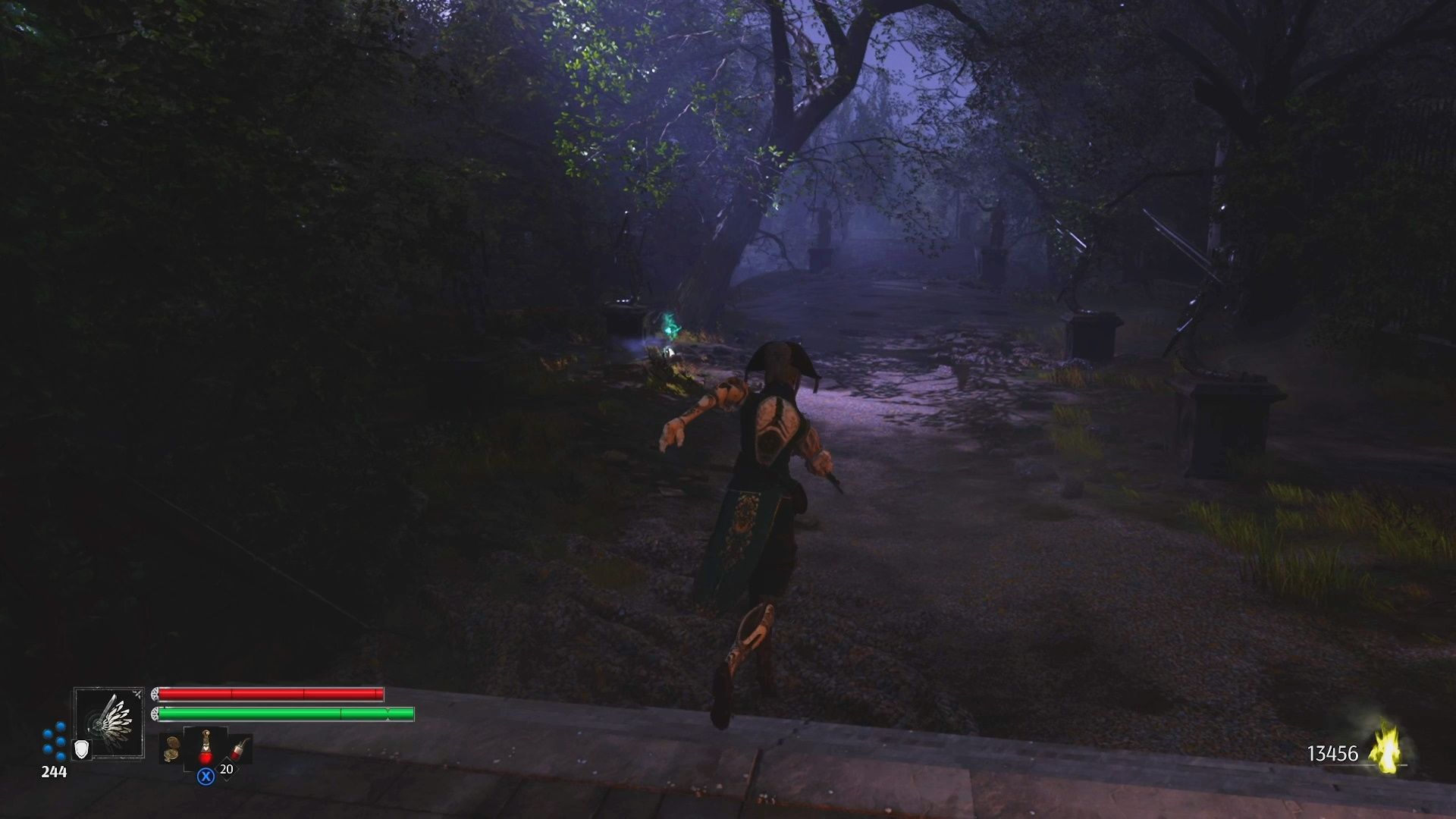 With your back to the stairs, facing the Vestal, take a right. You will cross a bridge and see a few cutscenes. After passing through a gazebo, you will cross another bridge. Here there is that Club-Wielding Butcher variant and a couple of standard Automats. Take them out and take a right. Travel down the stairs, and go straight. You will encounter another Violin-Playing Automat. Keep following the path and you will fight another Club-Wielding Automat paired with a Spider Automat. 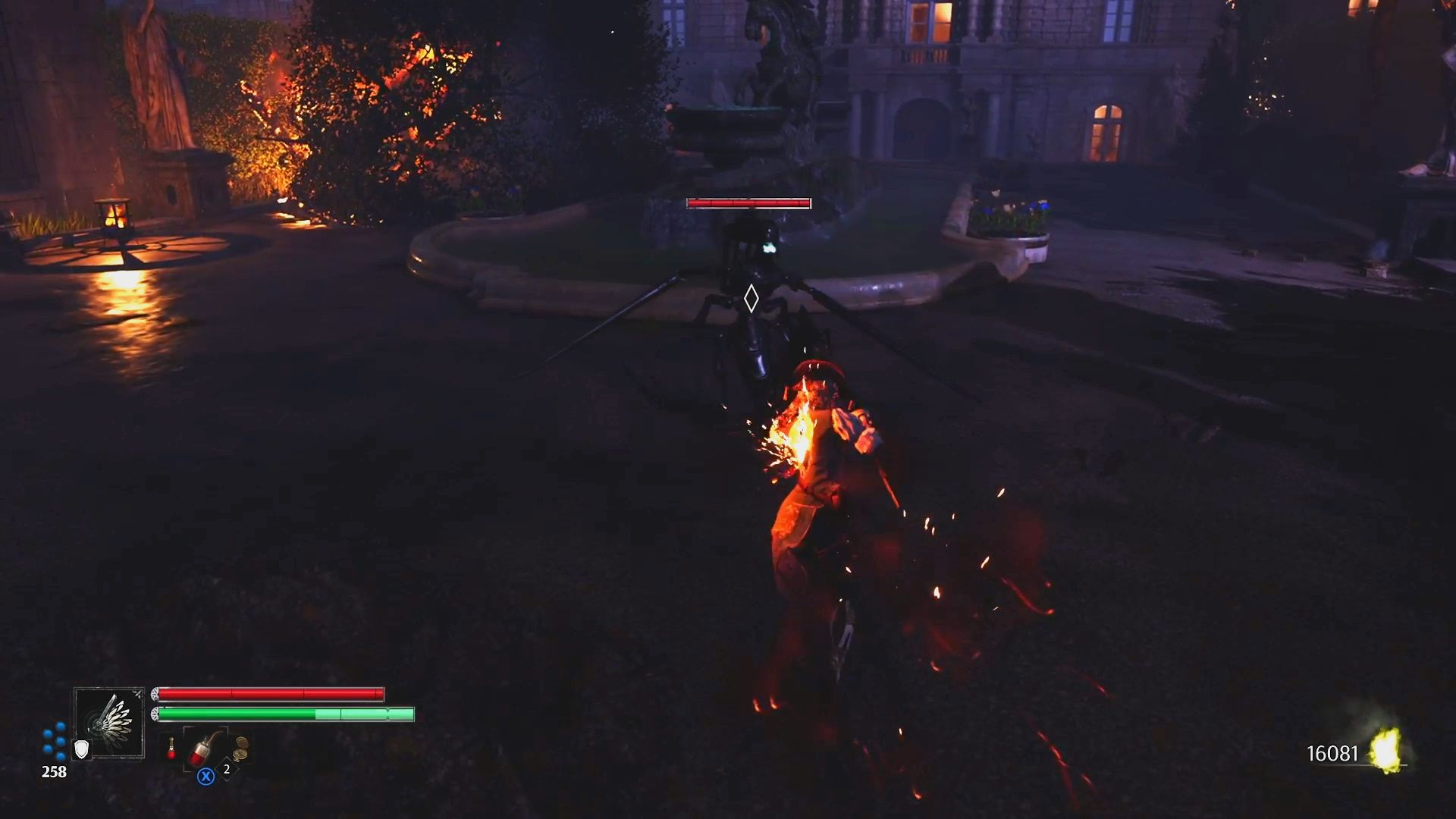 Once you clear that area out, you will travel up another set of stairs. You will then come across a fountain. From there, take a left down another set of stairs. There will be two Snake-Bodied Automats masquerading as statues standing in the fountains down here. Don't let them sneak up on you. Move toward the mansion, and take a left. Open up the gate here. It will take you back to the Vestal. Now, head back to where those two Snake-Bodied Automats tried to ambush you. Take your first left (with the manor to your back). Kill another Club-Wielding Automat and another Violin-Playing Automat. Keep following the path, and you will find another Vestal to activate. 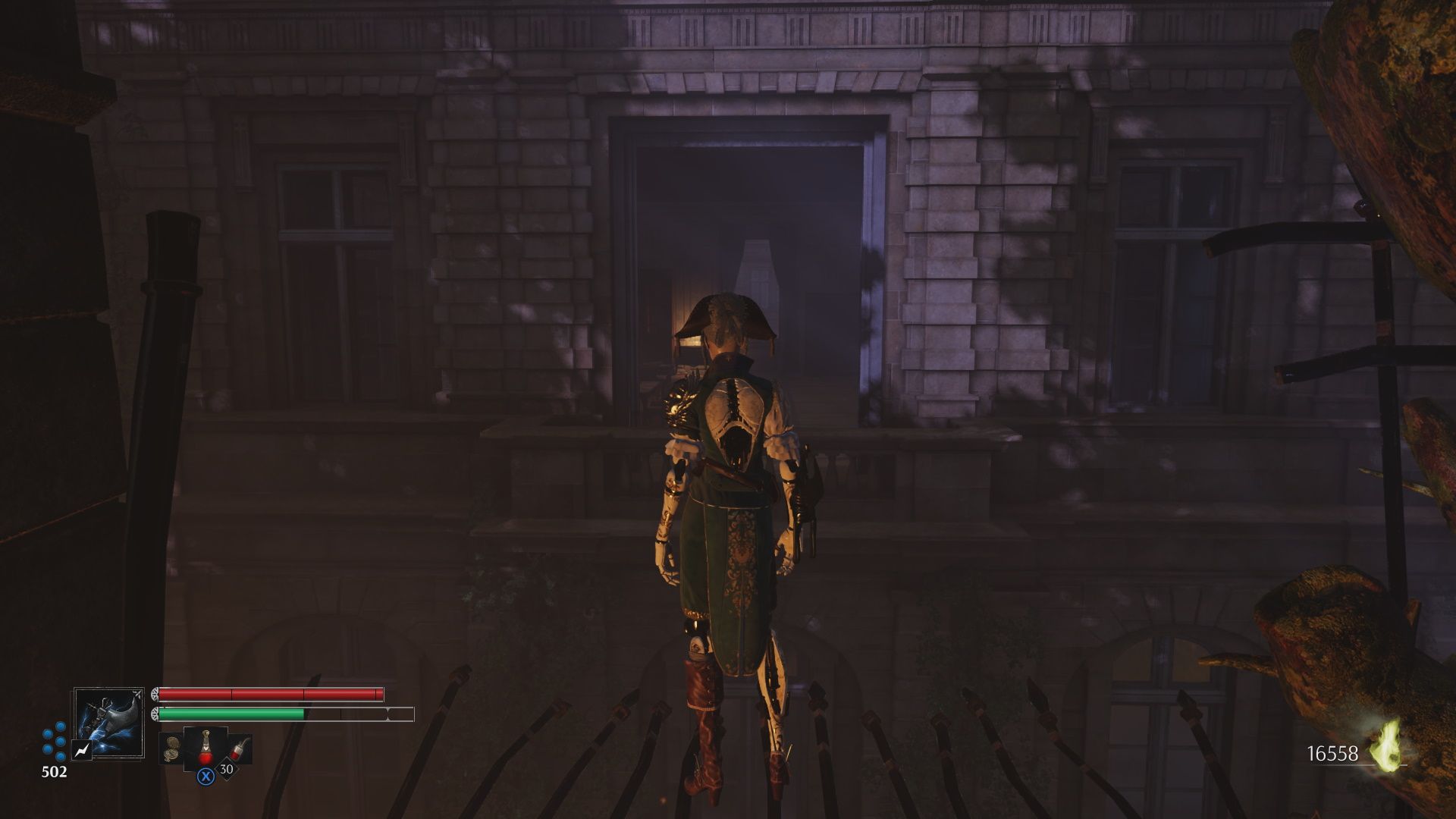 Travel between the arches and stick to the left side of the garden, running parallel with the fence. You will eventually find a section of the fence that has been bent. Just hop onto that section and jump down to the street below. This is the path forward, but before we progress, hook around and climb the stairs to open the path to the garden. Follow the garden to the end, and you will see a Ram-Wielding Automat accompanied by a Spider Automat, take them both out and grab the Grade 2 Efficient Ventilation Module and Module Key from the Automat corpse propped up against the wall.

Now, go back to where we were before with the bent fence. Instead of hopping down, use your air dash to jump onto the balcony across from the fence. Pass through this room, and you will be facing off against The Alchemist Of Luxembourg.