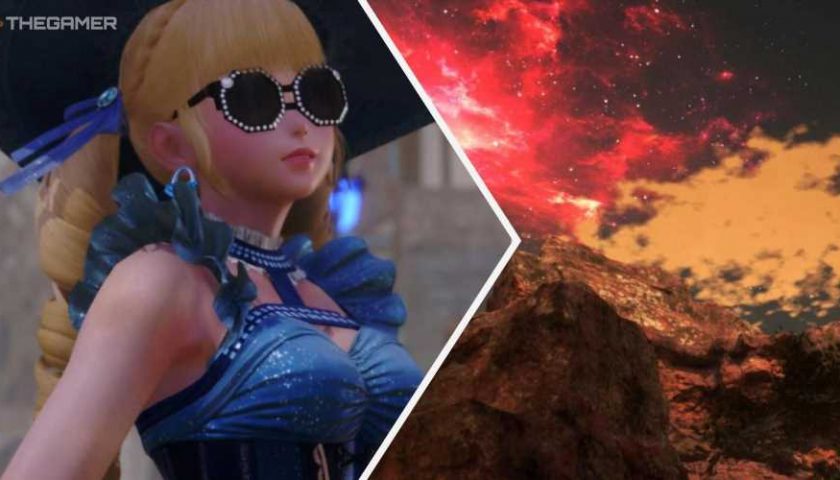 Have you joined the studio tri-Ace faithful and picked up the latest entry in the beloved Star Ocean series of JRPGs? Excellent. Star Ocean: The Divine Force, like many of its genre contemporaries, boasts an impressive amount of gameplay depth — enough to make newcomers feel like a stranded captain stuck on an alien world.

Hey, that's all right. Whether you're a curious first-time Star Ocean player or a franchise-long veteran of Japanese role-playing games' closest thing to Star Trek, we've collected this batch of tips to help you on your way through Aster 4. Go boldly, space heroes. 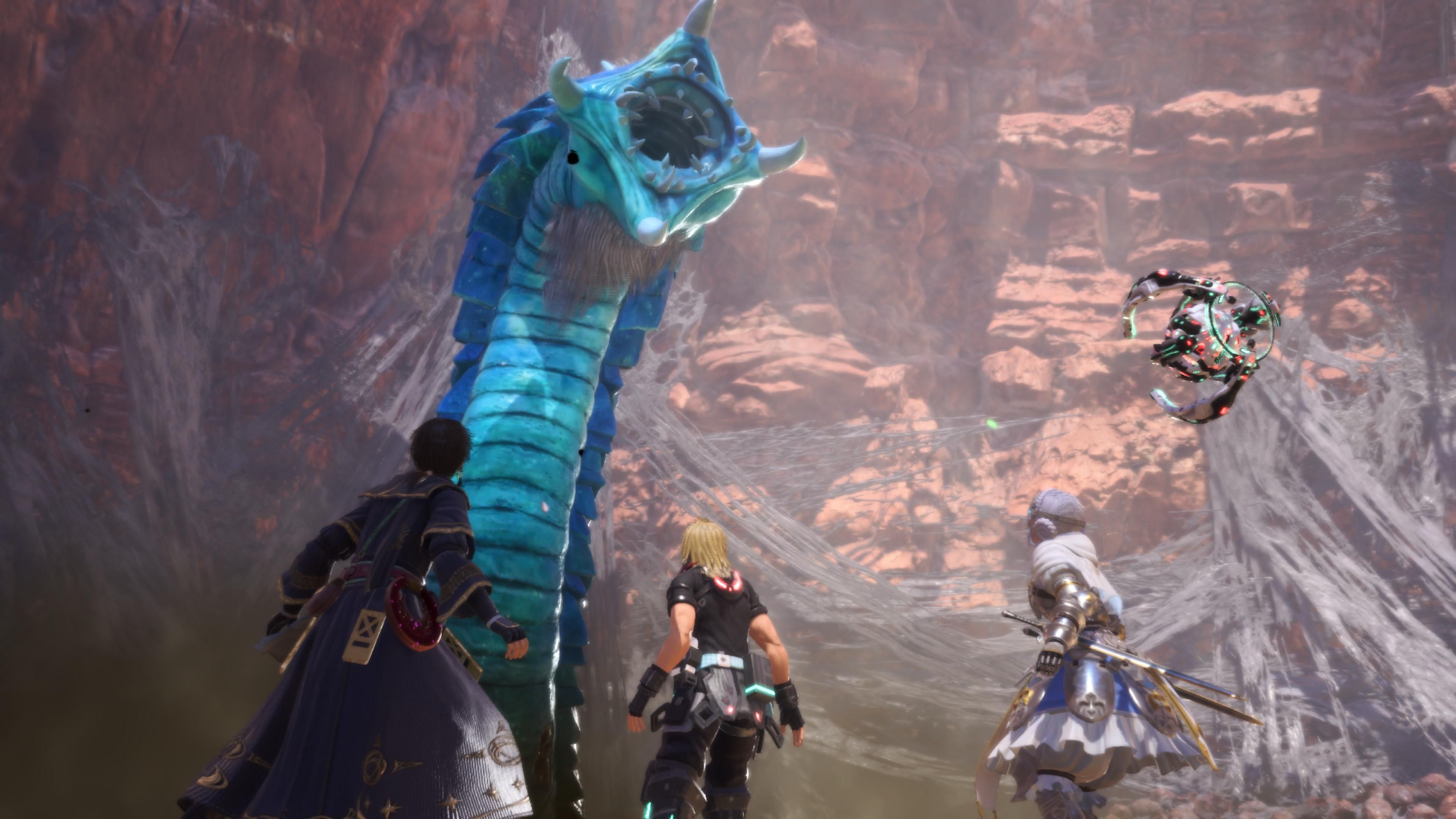 One of the first things Star Ocean: The Divine Force drills into your mind is the usefulness of the stop button. Pressing it mid-battle halts the flow of time, allowing you to pay closer attention to your surroundings. More importantly, it's helpful when in need of a heal. You can access your inventory to do so even while the action's happening, but why do that when you can relax and pick your potions?

The thing is, you'll often (if not always) be better off attacking with the character you're directly controlling. As the player, you're better at understanding when and where to strike, and what to strike with, than your (relatively competent) AI companions. It's a good idea, then, to select another character to use the item while you're on the stop screen. This lets you continue chaining combos and smacking the blazes out of your enemies whilst topping off health during prolonged battles.

As a bonus, it's worth noting that you can map items to your combo chain inputs. It's probably a bad idea to include a Blueberry Potion as the second stage of a full-on assault, but the hold buttons are perfect for this approach. 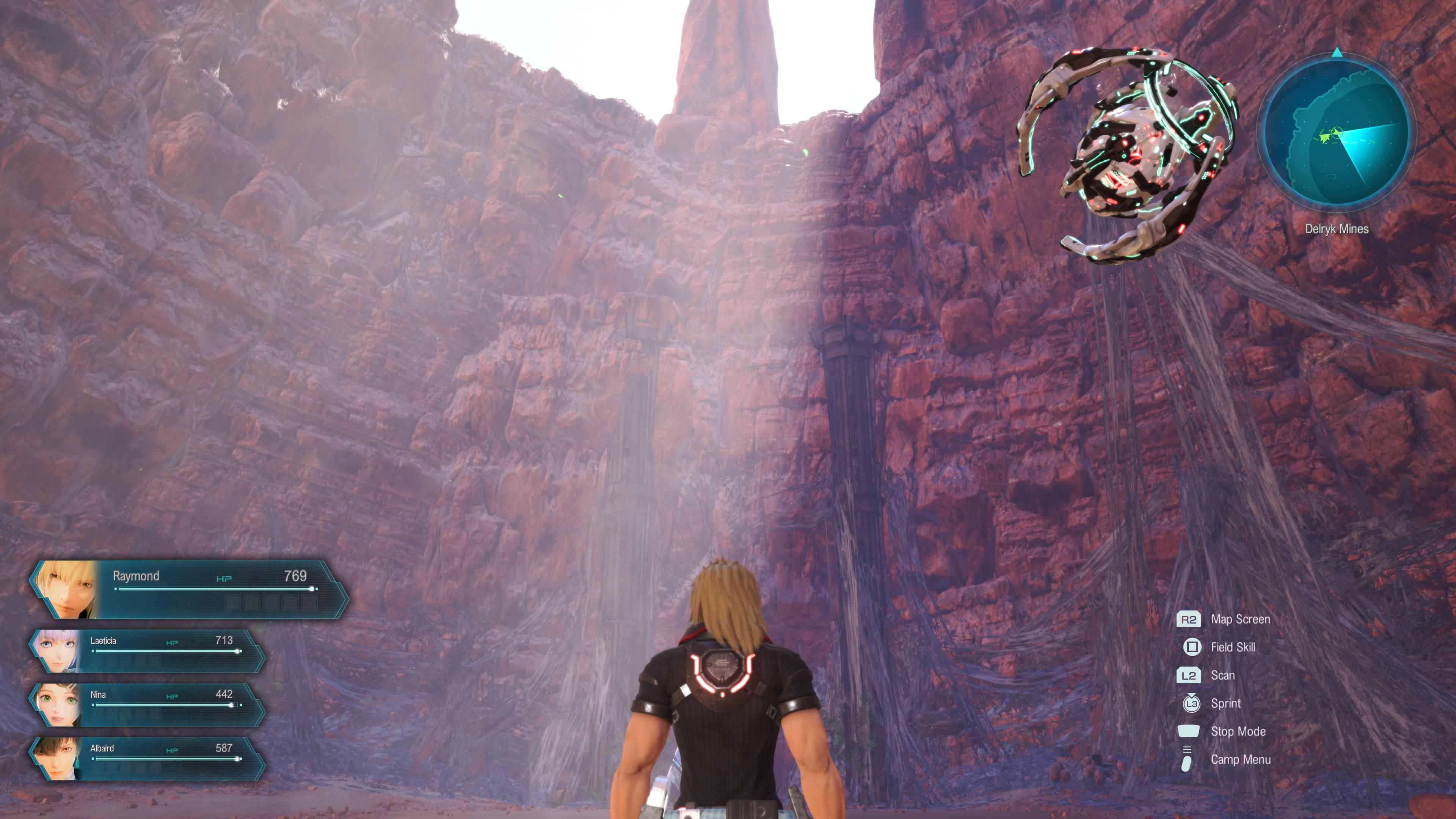 Another early tutorial is all about blindsiding. By zooming toward a foe via D.U.M.A., and then curving your angle at the last second, you "blindside" them, increasing your damage output and momentarily decreasing their own. It's great. It's also a hassle sometimes, and it's okay to skip it sometimes.

Most regular fights, for example, won't really require so much from you on Earth and Galaxy difficulty settings. You may feel more pressured to perfect blindsiding on Universe, the highest level of challenge in Star Ocean: The Divine Force. But if the battle is particularly chaotic, or you're in an enclosed space, or you just plain don't feel like bothering, it's typically fine to press forward all the way instead. Just do your best during boss fights, since they're more involved affairs.

Extend Your Reach To The Stars Above 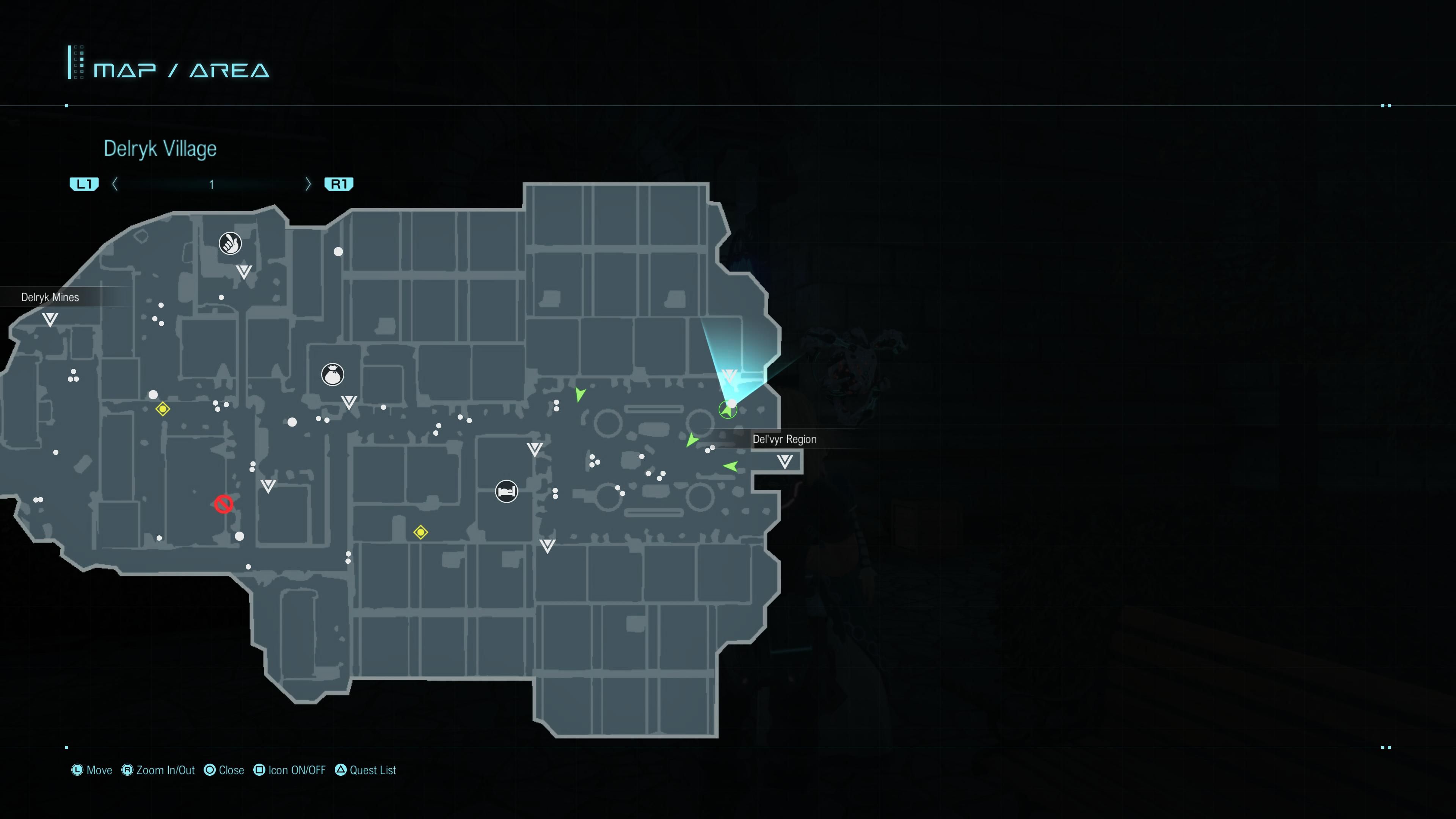 Raymond, Laeticia, and Albaird are all equally fascinated by D.U.M.A.'s ability to provide a serious uptick in speed, both during battles and amidst exploration. One aspect of this excellent mechanic that, pardon our pun, flies somewhat under the radar is verticality.

As the game goes on, you're going to notice an increasing array of locations that are either far above you or floating like miniature islands in the sky. D.U.M.A. is your vehicle for such areas, and they often feature rich rewards. At minimum, you'll likely locate more points to strengthen your robot buddy.

Speaking of which, extend D.U.M.A.'s sensor range ASAP. In fact, consider maxing it out entirely before investing much elsewhere. Being able to pinpoint treasure chests is a major boon in this game, as they're often rather cleverly hidden otherwise.

The game never really tells you this, but once a treasure chest pops up on D.U.M.A.'s sensor range, it shows up as an icon on your map. Be sure to check its spot before wasting time running in circles doing it manually. 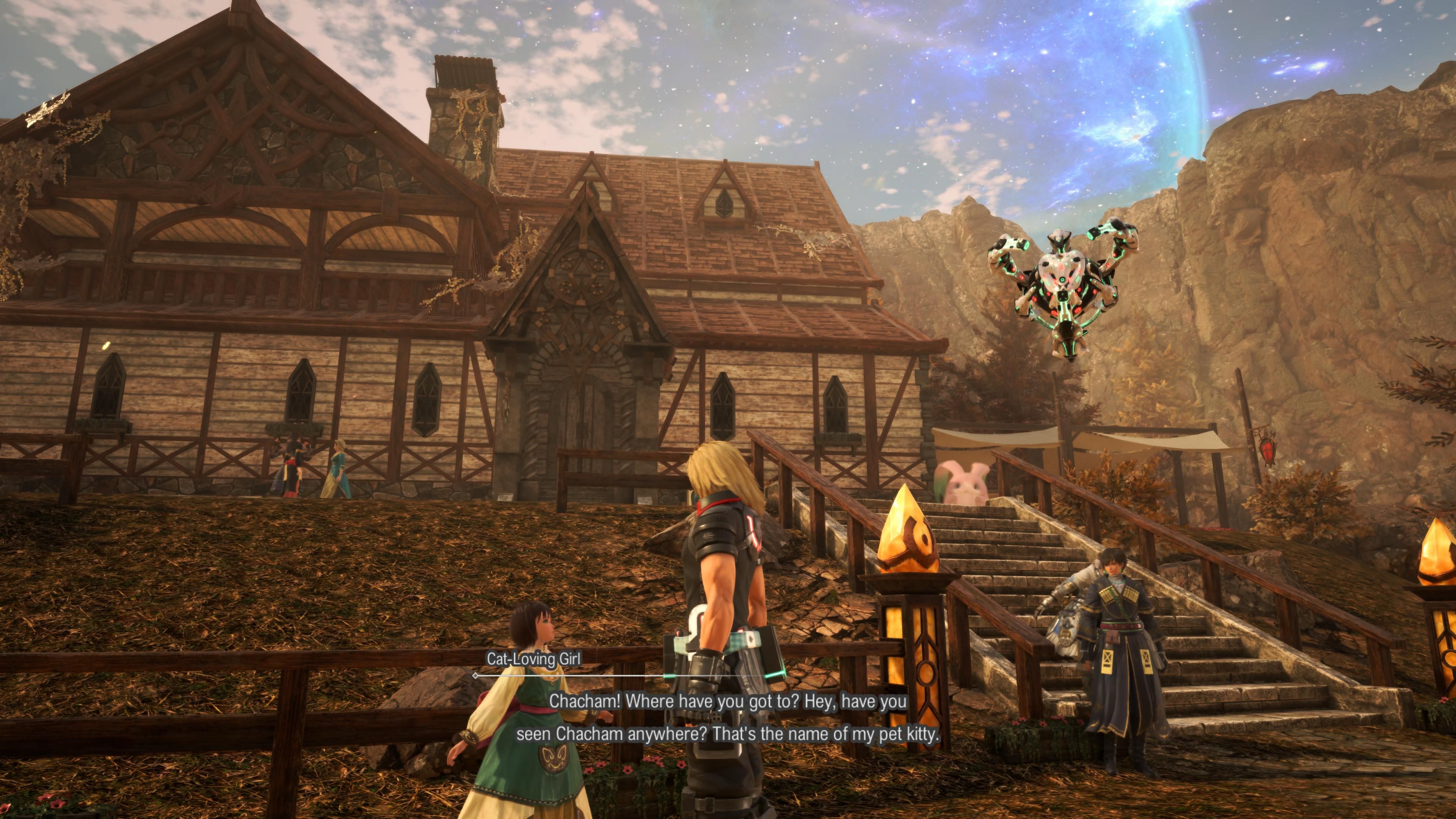 Ideally, tri-Ace and Square Enix will have patched this problem by the time you play the game, but as it stands (and potentially forever), Star Ocean: The Divine Force has a notable issue with the volume of NPCs in settlements. Their ambient dialogue is muffled out to the point of near-nonexistence. Sometimes, this isn't the case; but for the most part, it absolutely is.

The foolproof way to figure out what they're all on about, thus enriching the atmosphere, is to go into your settings and enable conversation logs, which are off by default. This will post everyone's conversations on the left side of your screen for a moment whenever they trigger. Just be prepared for a hilarious number of repeating NPCs; for some reason, Aster 4 seems to have an unspoken issue with cloning… 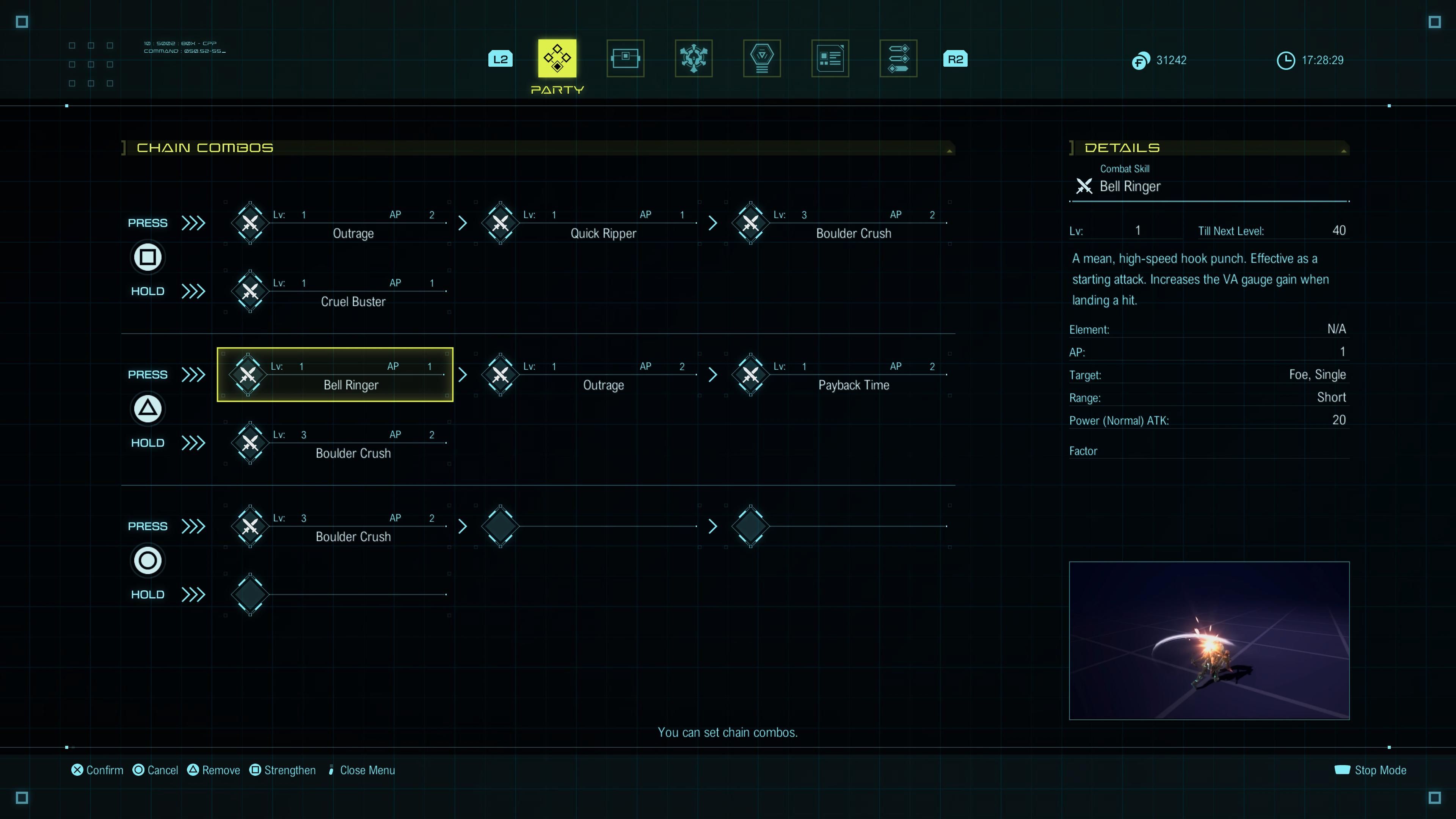 There are certain aspects Star Ocean: The Divine Force's tutorials go over fairly well. And then there are all the things the game seems to skip over, and that can be frustrating at times. Best practice for chaining combos, one of the most fundamental elements of combat, is sadly left mostly unexplained.

To an extent, you'll be fine with anything. But if you're fighting foes with specific weaknesses, it's good to add stuff they're susceptible against if you've got it. Better still, look for the skills that the in-game text mentions are good for 'openers', and put them first in the line. There aren't a lot of instances in which the text will tell you when something's prime for middle or closing, but this is enough to get you started, literally and figuratively.

Chat With Your Party In Towns 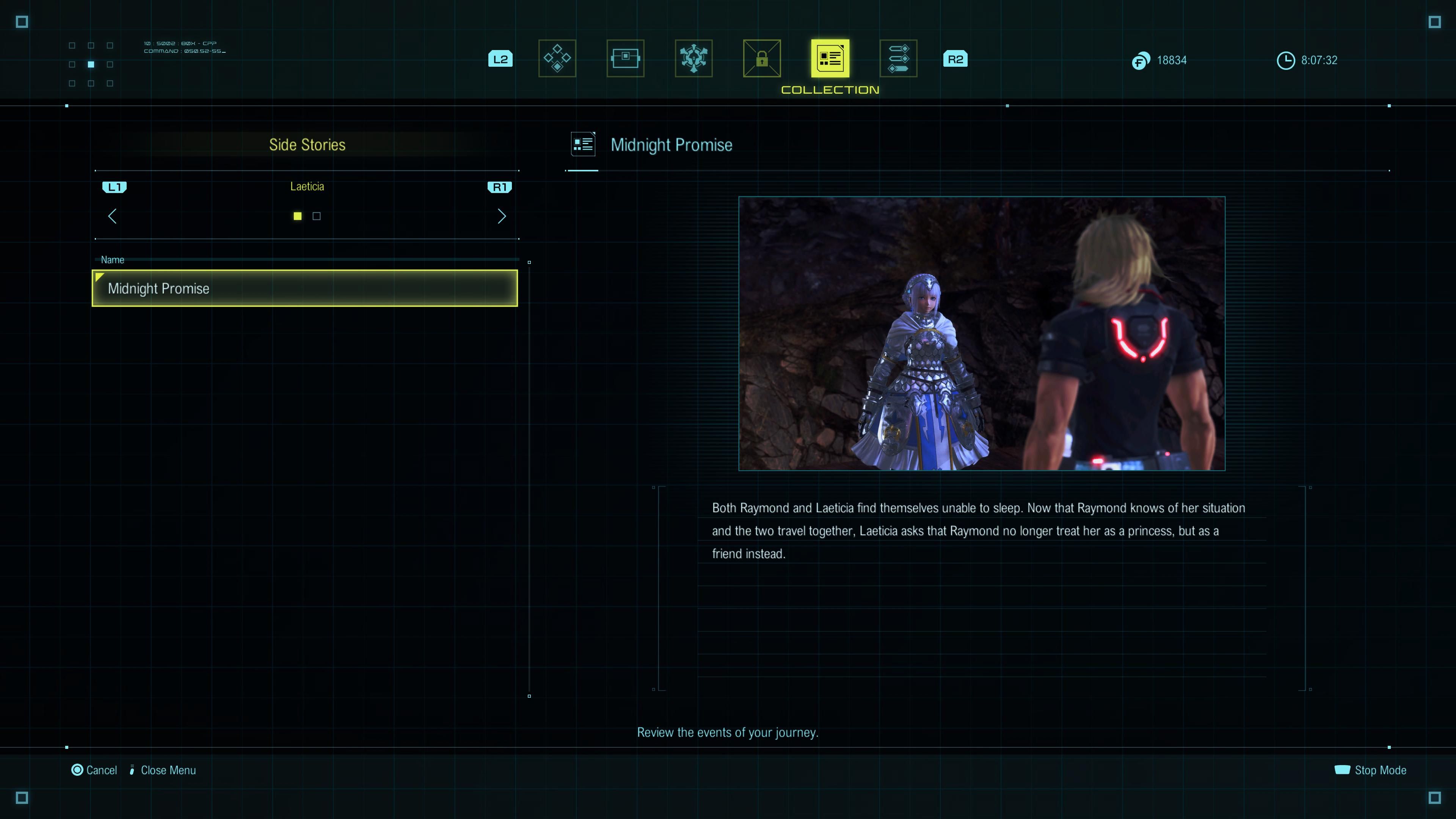 Private Actions have been a famous staple of the Star Ocean series since its inception. Not unlike the Tales series' skits, Private Actions frequently require specific conditions in order to occur. They're chats between your characters, and you can bring them closer together, as friends or potentially something more, through the Private Action system.

The best advice we can give, by far, is to speak with your party members at the game's various settlements, whenever the team splits up while you're looking around. Oftentimes, nothing will come of it but a single statement; other times, however, you'll unlock a limited-time Private Action, furthering along these side stories.

Ignore Es'owa Until The Seaport 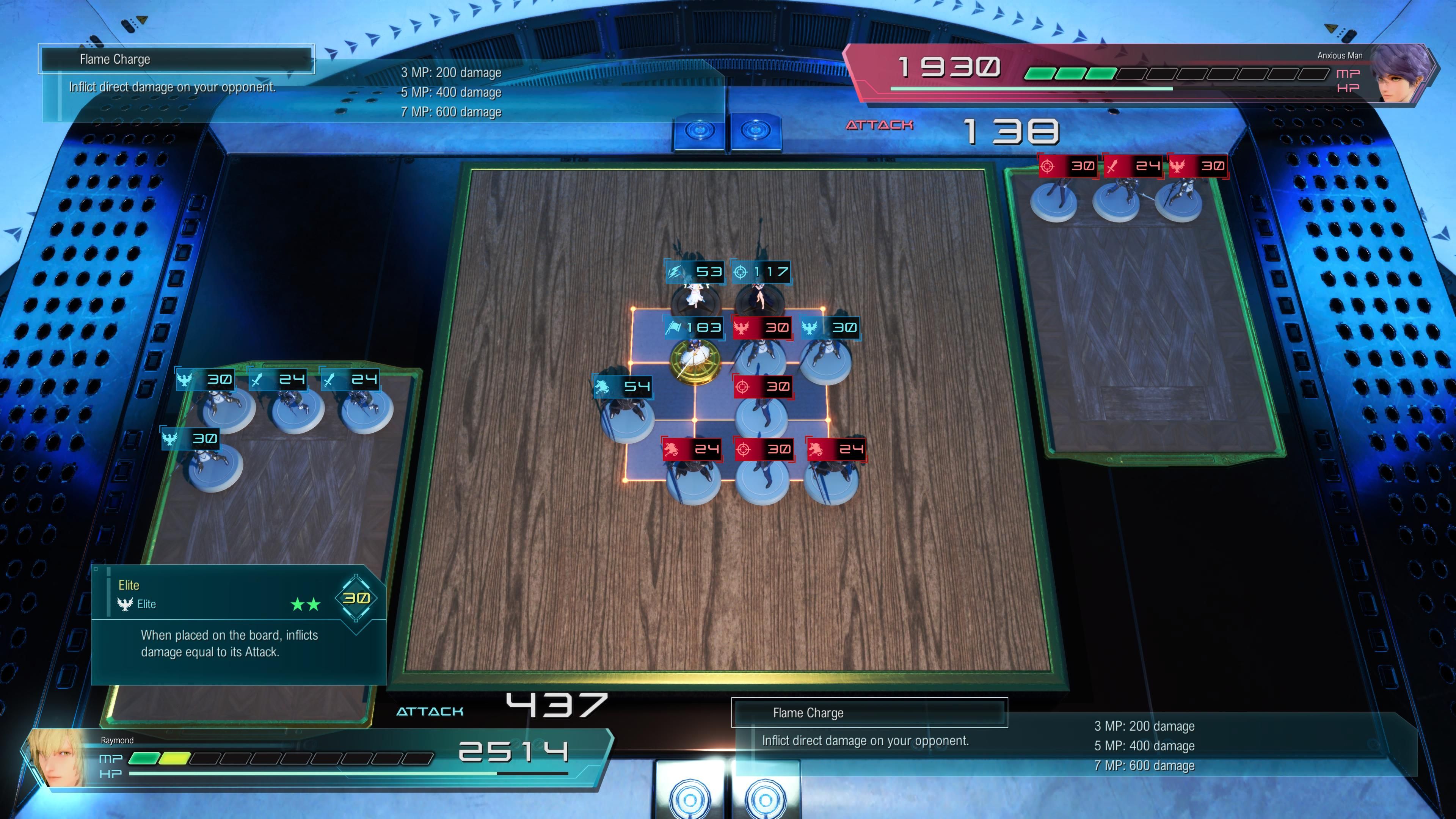 Es'owa is Star Ocean: The Divine Force's main mini-game. Players can collect figurines of dozens of famed Star Ocean series characters; each of these 'pawns' belong to one of several categories, such as Soldier or Wizard, but they're all unique in some fashion. Furthermore, pawns can be equipped as accessories, and some are pretty great.

That's all well and good, but the issue is that a bunch of townsfolk are going to stand around thinking you're challenging them to a match before you can actually obtain a deck and begin your Es'owa adventure in earnest. From the very first town, you'll bump into some folks whose dialogue suggests they want to play a round, and the game will notify you that you can't, because you don't have a deck.

It's easy to think you're missing something here, and technically you are; but don't worry, you can't acquire a deck until a few hours into the game, at a certain seaport settlement. That seaport is Rythal, Chat with a woman near the inn, identified as Shady Merchant, who will give you a side quest. More to the point, she'll give you the opportunity to finally construct your deck. 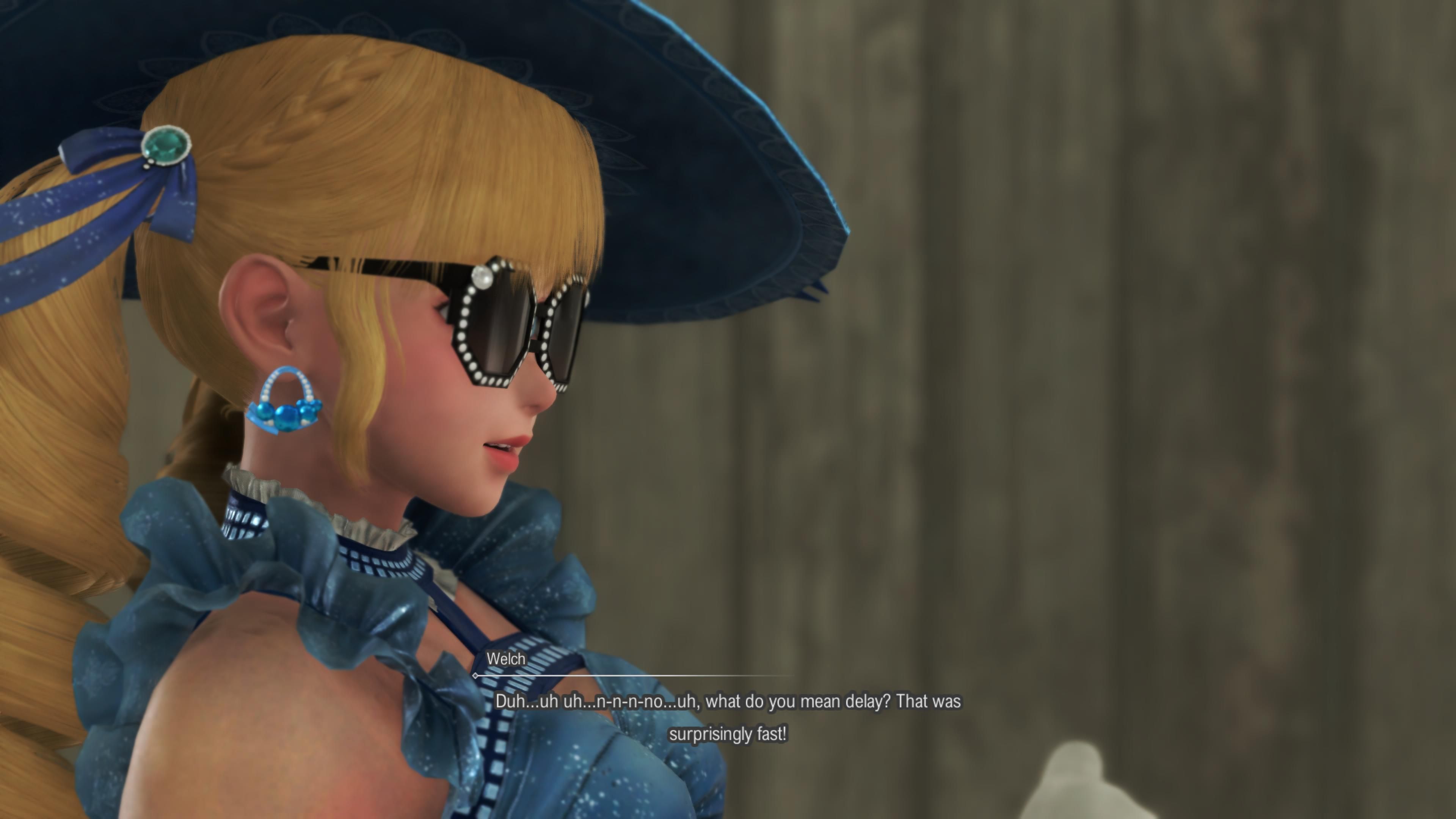 While we're on the subject of Rythal, the party bumps into an odd lass named Welch Vineyard here; she's a mainstay of the Star Ocean series for several games and counting, and she's your ticket to item creation. The item creation system has always been a big part of what makes Star Ocean Star Ocean, if you will. Welch drops something, and either Ray or Laeticia will comment that they should return it to her in Delryk Village next time they visit the place.

You can't go back to Delryk just yet, since a few more cutscenes need to occur here in Rythal, but you'll be headed back there afterward. Go to that weird building with a giant pointing finger on its roof before doing anything else, so that you don't forget to unlock what is, almost without doubt, the single most important non-combat mechanic in Star Ocean: The Divine Force. 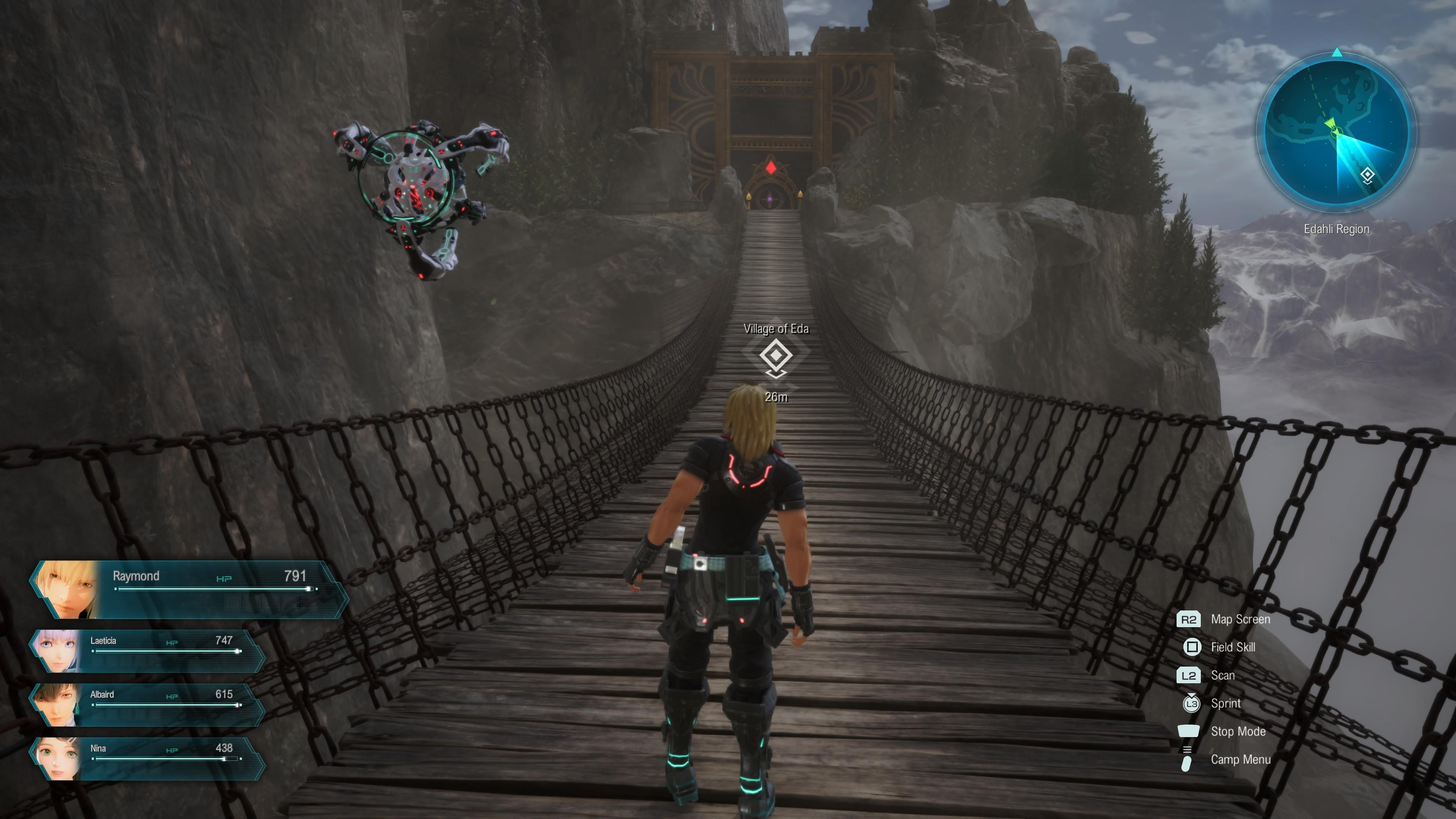 The first time we got a warning message when attempting to fast travel to a prior location in Star Ocean: The Divine Force, we kind of freaked out a bit. It tells you that you're going to miss scenes if you do this, so unless you're just not in this for the story whatsoever, that's rather ominous, no?

The truth is, if you aren't returning someplace specifically to advance the story, you'll lose little if any chatter whatsoever. And you definitely won't miss entire scenes. Don't hike it all the way back to some village just because you're turning in a side quest, for goodness' sake. Ignore the warning if you aren't progressing the narrative, because it's really no big deal.