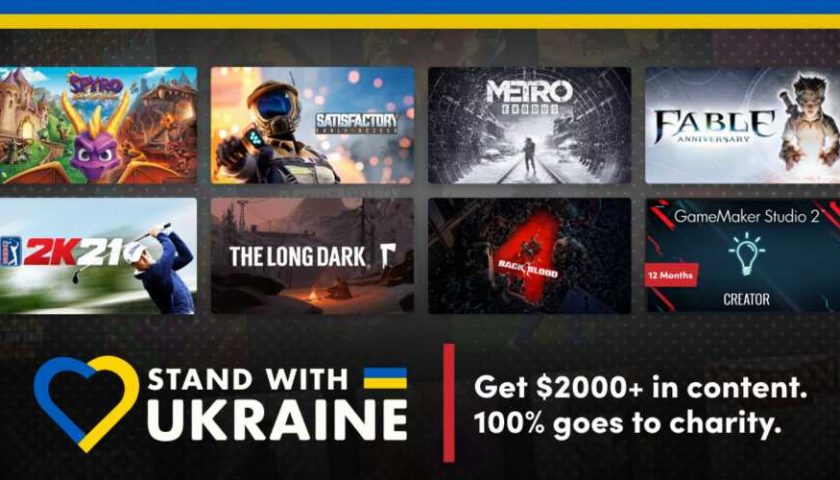 Humble Bundle and its users have joined numerous other game industry figures in raising huge sums of money for humanitarian aid in Ukraine. The Stand with Ukraine bundle has now come to an end, closing on more than $20 million raised for four charities operating in the region.

The bundle was huge, giving players $2,600 worth of content for a minimum donation of $40. The plan was clearly successful, with Razom for Ukraine, the International Rescue Committee, the International Medical Corps, and Direct Relief set to receive around $5 million each. Better yet, all of the proceeds will be going directly to them, with Humble Bundle and game publishers not taking the cut they would usually receive from these sales.

It's not surprising to see it end on such a high note. The bundle, which gave users 122 products for the price of one, was raising millions right out the gate, reaching $5.3 Million just hours after the deal went live.

A ton of huge games were included in the bundle, including Back 4 Blood, Fable Anniversary, Sunset Overdrive, Max Payne 3, and Spyro Reignited Trilogy. It also included the indie gem This War of Mine, whose developers were among the first to donate their game's proceeds to Ukrainian charities.

This is far from the only successful charity drive we've seen in the gaming industry recently. As were reported previously, Fortnite managed to raise $36 million for Ukraine in just one day. An itch.io bundle brought in a further $6 million earlier in the month, on top of game publishers making their own individual donations. This has included Bandai Namco pledging $850,000, $200,000 from The Pokemon Company, as well as $500,000​​​​​​​ from Square Enix. More is expected as the invasion of Ukraine continues.