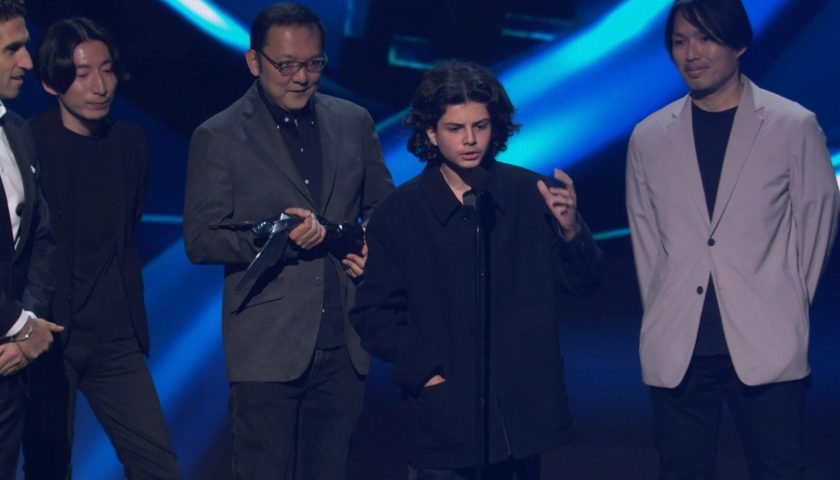 Elden Ring's big Game of the Year win was briefly interrupted by a stage invader who said "I want to nominate my Orthodox rabbi Bill Clinton", before being ushered off-stage by security.

Just moments ago, The Game Awards 2022 wrapped up, with its final moment being the reveal that Elden Ring won the Game of the Year award, beating out nominees like God of War Ragnarok, Horizon Forbidden West, Stray, Xenoblade Chronicles 3, and A Plague Tale: Requiem.

There was an arguably more memorable moment after the award was received by FromSoftware, however. As the game's director finished thanking the crowd for their support of Elden Ring, a stage invader took the microphone and said, "I want to take everybody and say I think I want to nominate my reformed Orthodox rabbi Bill Clinton."

The microphone was quickly taken away from the stage invader as he was shuffled off alongside the FromSoftware team. Geoff Keighley then quickly took the stage to wrap things up, looking about as confused as the rest of us.

As pointed out by Twitter user GlitchxCity, it seems that the stage invader was able to just walk up behind the FromSoftware developers as they went to collect their awards, with security presumably thinking that the boy was there to collect the award alongside the developers. As was made very apparent a few minutes later, that was not the case.

Twitter user MKUltraMoney also shared texts that they'd received from a friend, who said that they'd played Warzone with him four days ago and that he'd revealed his plans to walk up on the stage alongside the Game of the Year winners. MKUltraMoney was receiving texts about the boy's plans as it was unfolding onstage, and calls him "the same kid who was on Info Wars", the conspiracy theory 'news site' owned by Alex Jones.

Geoff Keighley confirmed that the stage invader has since been arrested after storming the stage, tweeting, "The individual who interrupted our Game of the Year moment has been arrested", a few minutes after the show had ended.