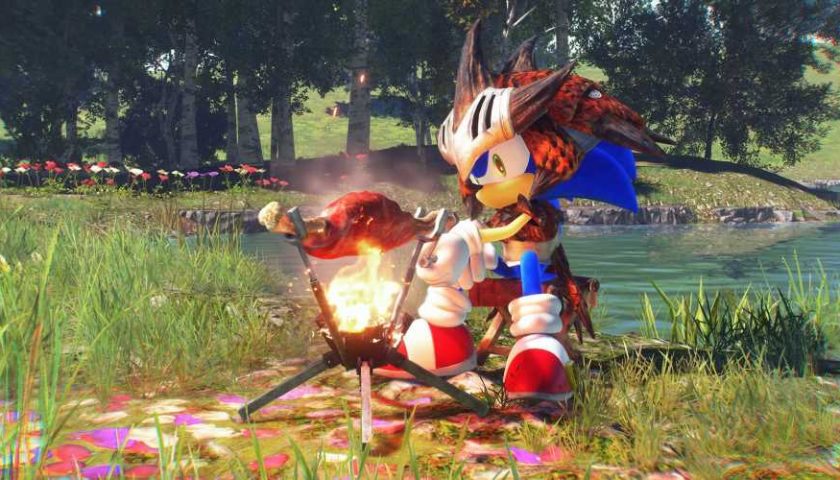 Sonic and Monster Hunter fans may recall that the two had one of the least expected crossovers ever, as Sonic-themed DLC was added to Monster Hunter Rise in celebration of Sonic's 30th anniversary. Well, this time it's Sonic's turn as it's been announced that Sonic Frontiers will be receiving some free Monster Hunter-themed DLC that will be added to the game a little after its release on November 14.

First revealed by the official Sonic the Hedgehog Twitter account, the DLC seems to be a Monster Hunter-themed outfit for Sonic who is shown clad head to toe in a fancy set of armor in an accompanying piece of art. Thankfully, we got an even better look at the DLC via the Japanese Sonic the Hedgehog Twitter account, which shared several screenshots of Sonic in his fancy armor, cooking a leg of unidentified meat over a campfire. He must have gotten sick of the chilli dogs.

That's not the only piece of Sonic Frontiers DLC fans will be able to grab shortly after release either. It was announced earlier this month that Sonic fans who sign up for the official English-language version of the Sonic Frontiers newsletter will receive the blue blur's iconic Soap Shoes that he wears in Sonic Adventure 2. So that some great shoes and a fancy set of threads for Sonic's next outing now – all he needs is a swell hat and he's red carpet ready.

Sonic Frontiers is actually less than a month away now, so we won't even have to wait too long to nab Sonic's dragon armor. The game officially launches on November 8 for PC, PS4, PS5, Xbox One, and Xbox Series X. If you want to know more about the game before launch, we have several previews available with plenty of info on Sonic's next adventure.