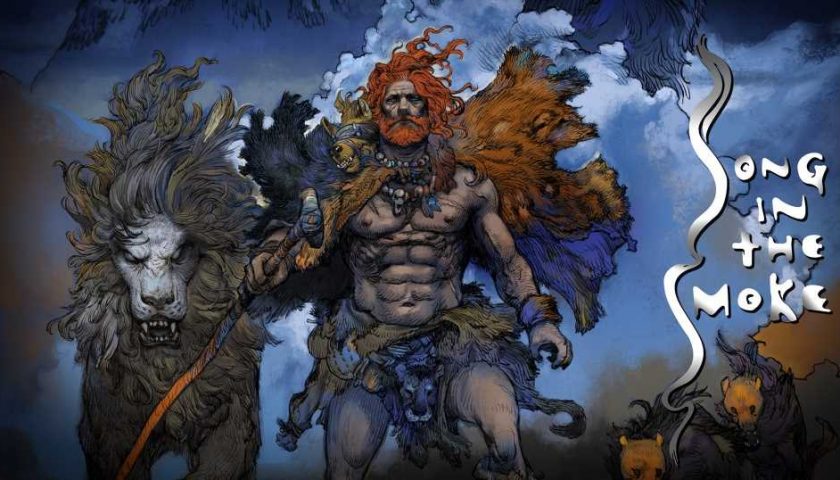 It doesn’t really matter that Song in the Smoke is, visually speaking, a little rough around the edges. Though leafy and lush, its forests are linked by walls of muddy textures and dated character models, but developer 17-Bit more than wins you over with a rare and extremely raw spirituality. Fantastic, otherworldly creatures that equal parts enamor and terrify, arresting supernatural sights that capture an enormity of the universe beyond and soulful audio work that steeps this prehistoric adventure in a sense of deep respect for culture make it a thing to behold at any one moment. Truly, Song in the Smoke is a game with a seldom seen majesty to it.

Song in the Smoke Review – The Facts

What is it?: A VR survival game set in prehistoric times in which you’ll craft items and hunt increasingly dangerous creatures.
Platforms: Quest, Rift, PSVR
Release Date: Out now
Price:

17-Bit’s VR debut has the depth of its flatscreen contemporaries with an understanding of what needs to change to make them work inside a headset. Song in the Smoke has aim and direction, giving players a series of areas to discover and complete objectives in (which are impressively big for a Oculus Quest) before moving on to the next and managing their energy and food supplies at the same time. Crucially, the laws of this jungle are tough and unforgiving but also don’t waste your time with antiquated UI or overly complex crafting, and it has its own ideas about how to expedite or enhance some of the genre’s more mundane elements for VR. The result is a uniquely assured gameplay experience.

So, yes, you’re collecting sticks and stones to make arrows and rocks. You’re going to get hungry, you’re going to get tired, often at times that are very inconvenient. But you’re also going to actually enjoy managing these systems; you’ll always have the tools to craft wood and stone — a bone knife and billet respectively — in your inventory that allow you to quickly make use of any of the plentiful resources you’ll find at your feet. While they won’t solve everything, special plants can help combat fatigue and health without having to return to a campfire and waste away a day sleeping.

Most importantly, there’s a rare tactility to using these items, doubling down on Song in the Smoke’s connection to nature. Crushing petals with a mortar and pestle is rightly rustic work, and there’s a strangely wholesome satisfaction to running a knife alongside a stick of wood until it turns into kindling for a fire. Striking stone on the side of a wall to spark up a flame, meanwhile, never gets old.

Streamlined, perhaps, but not entirely unforgiving. The game only lets you save at campfires that, with eight stones, you can make pretty much anywhere. But death will take you back to the last time you stored your progress, meaning there’s often the genuine threat of losing a crucial set of resources or a hard-fought victory.

It doesn’t completely sidestep the more exhaustive side of surviving. Hunting animals uses up a lot of laboriously sourced arrows and, when you kill something, it’ll take up a chunk of the day to carve even just one of the three or four items you can get from it. Costing time translates to an increase in hunger and fatigue that makes reaping the rewards of your hunt a slightly bitter pill to swallow.

But, for every time Song in the Smoke frustrates, there are more than enough great ideas to balance it out. Status ailments are brilliantly displayed as hallucinogenic smokescreens that keep you aware of your condition without being too invasive, food can be cooked and then dried to keep it from deteriorating in your inventory, and a broken bow or club can be near-instantly replaced with the sticks at your feet. Most survival games release in Early Access and take months, if not years to find the right groove, but Song in the Smoke seems to have it right out of the gate.

And there’s evolving structure beyond that survival core. In every area of the game you’ll first have to seek out three stones that will, in turn, unlock a boss fight elsewhere in the map. These encourage you to fully explore your surroundings before learning a new technique to help you overcome new threats. Sometimes it’s as simple as crafting exploding arrows for more damage and, at others, it involves first luring a beast into a false sense of security. New areas bring new conditions that will need warmer, more defensive outfits crafted from animal pelts, and the strength of the natural resources around you will improve too.

It’s a winning formula that makes Song in the Smoke feel as much like a campaign-driven epic as it is a wide-open survival experience. It also means the game offers plenty of content – each area will likely take you at least an hour of exploring, upgrading, surviving and battling, and then there are hidden health boosts to find by risking going out at night. It’ll take you past the nine hour mark with ease unless you’re dedicated to rushing it.

Having said that, combat is one of the game’s weaker elements, let down by the enemy’s skittish AI that aims to reproduce the primal, erratic nature of, say, a hungry lion, but often ends up just having them run in circles. You also have an upgradable arrow quill that can only hold a certain amount of ammo, while the rest is stored in your pouch. I’d often find myself running out of arrows mid-fight, which doesn’t make sense when I’d have another 10 just sitting in my backpack, and the game doesn’t pause to let you restock them. I can understand why 17-Bit made the decision (if you could fire 40 arrows at will, fights would be over in no time), but this isn’t as elegant a solution as you’d hope. You also can’t swap items in your hands without dropping them, which is a little inconvenient.

What I like most, though, is the game’s admiration for its ecosystem and otherworldly heritage. Song in the Smoke is about embracing the wilderness, imagining the chill around your ankles as you hunt for fish by a waterfall or applying planning and patience to a hunt. There’s haunting beauty to each of its elements, from the way a lion slowly decays into a ghoulish husk days after a fierce battle or the ethereal appearance of boss creatures, which look like a cosmic window into the far reaches of space.

Song in the Smoke Review – Comfort

Song in the Smoke offers both smooth and teleportation-based locomotion with other comfort options for the type of turning. Though it’s a long experience, the relatively slow-paced nature makes its quite comfortable.

This carries through to the game’s plot which, while light, makes its mark with a handful of cutscenes that bind the levels together. Without spoiling anything, they’re flashbacks that are hypnotic to watch, a mix of gorgeous ritualism and tribal decoration in which you’ll struggle not to find a sight to be arrested by, be it the watchful gaze of a crow above you or the carefully-plotted choreography of an elder in action. It’s utterly engrossing.

A few bugs will break the spell, though. The game gives you three save slots and I strongly encourage you to alternate between two and keep the third for just before you start a new level – I lost about an hour’s progress when I realized one area didn’t spawn the collectables I needed to progress and I even encountered areas of the map that just straight up didn’t load if I approached from one angle, leaving me staring into a misty abyss with the resources I need just out of reach.

I am, if you couldn’t tell, quite in love with Song in the Smoke, then. It’s rough, yes, and some of its design ideas need a second pass. But it’s also an intoxicating trip, an experience directly connected to the beating heart of nature and acutely aware of the structure and interaction needed to make its survival gameplay work in VR. All of this is thrown into a mortar and crushed beneath a pestle to conjure a game in which you can practically feel the slip of wet mud, scrape of scrambling over a cliff face or chill of water flowing over your feet. Like the healing potions and mystic concoctions you’ll brew, Song in the Smoke is a hell of drug.

For more on how we arrived at this rating, read our review guidelines. What did you make of our Song in the Smoke review? Let us know in the comments below!