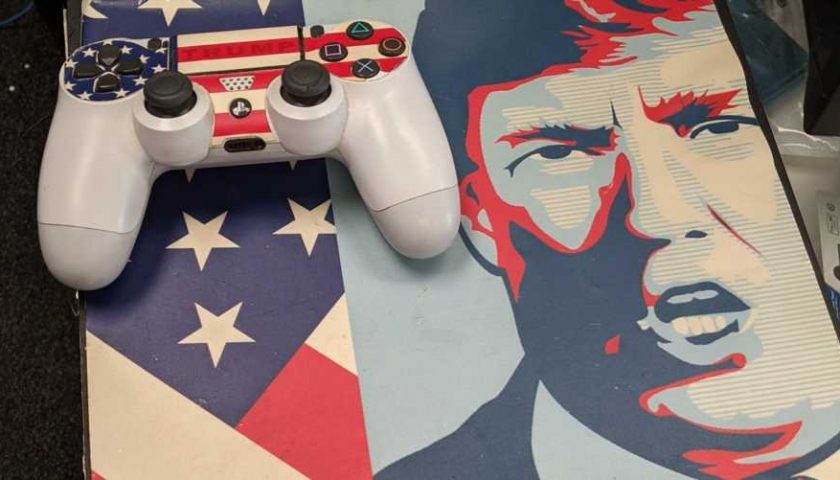 There's nothing quite like making a console uniquely yours, especially when there are quite literally millions out there identical to it. Turns out someone did that with their PS4 Pro by creating a Donald Trump-themed case for it, but has either replaced it or gotten bored of looking at the ex-president as it has now found its way to a GameStop.

The photo of the pretty garish-looking console found its way onto the GameStop subreddit this week (thanks, GameRant). Livrax7, who shared the photo, is either a GameStop employee or has happened upon the console in one of the company's many stores. They claim the Trump PS4 Pro has been traded in, which means providing it hasn't already been sold, it is waiting to be snapped up, potentially in a GameStop near you.

The console's case has a red, white, and blue color scheme, because of course it does, with around two-thirds of the top of it occupied by a close-up image of Trump's face. The accompanying DualShock hasn't gotten away scot-free either. The controller is mainly white with a US flag across the touchpad and its buttons. Perfect for any true patriot if sold separately, but only suitable for Trump fans if you have to buy the console too.

One commenter has highlighted how amusing it is that the cover also includes the phrase “I am rich” on the front, right there at the bottom. Not necessarily because they traded their console in because they need cash, but because GameStop probably didn't give them much for it. Unfortunately, exactly how much the store coughed up for the console, and how much more than that it is now being sold for, hasn't been divulged.

Odds are it will still be cheaper than a PS5, the price of which was upped in a number of regions last month but not in the US. If you don't want a console dressed as Trump, there are other options out there. These fan-made God of War Ragnarok cases are incredible, but be quick as only 80 will be made. Xbox also launched Halo Infinite-themed Series X consoles, but again, they are in limited supply.