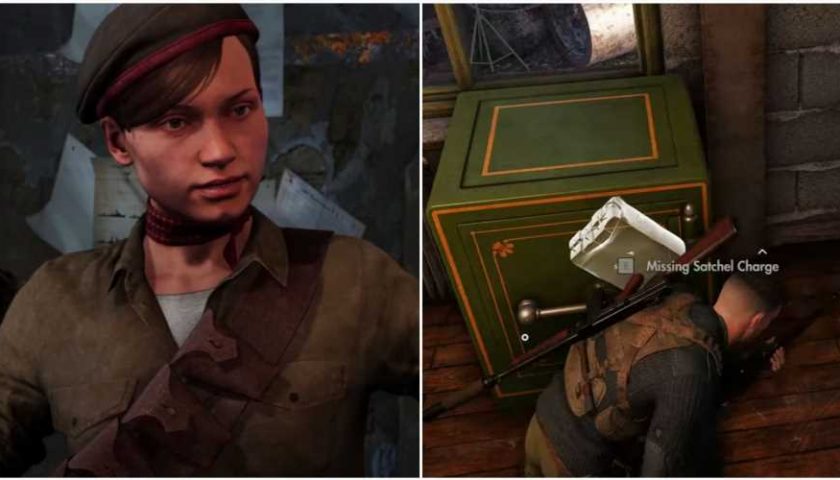 Sniper Elite 5 has a thrilling campaign, which makes sense considering its title. There are tons of incredibly fun missions to complete, which each include a set of extra objectives you can optionally finish. If you enjoy stealth or third-person shooter games in general, then the War Factory mission is a lot of fun.

War Factory includes lots of side missions that you can complete throughout the open map, but you'll also have to deal with many mandatory objectives before you can finish it. Here are a couple of important tips, along with a walkthrough for each objective and side mission in the War Factory campaign mission.

How To Start War Factory 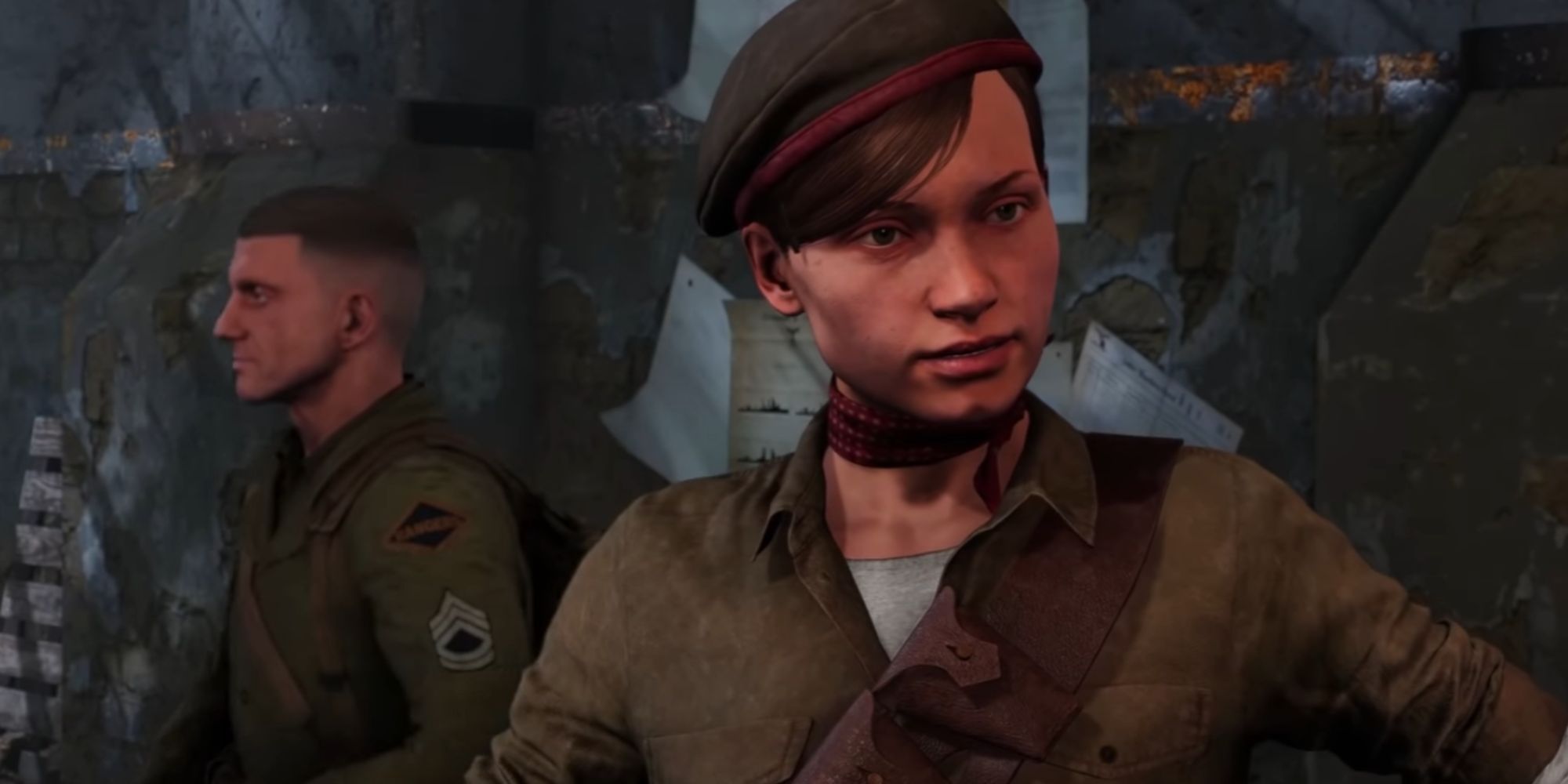 You can start the War Factory mission after finishing Spy Academy. Once done, click on the Campaign button on Sniper Elite 5's main menu, and you'll see a list of missions to choose from. Not only can you customize your current mission, but you can also choose your settings in this menu, including a customizable difficulty option.

The Axis Invasion setting lets other players join your mission, but as an enemy instead of a teammate. If you don't want a random enemy player invading the War Factory mission, then turn it off in the menu. 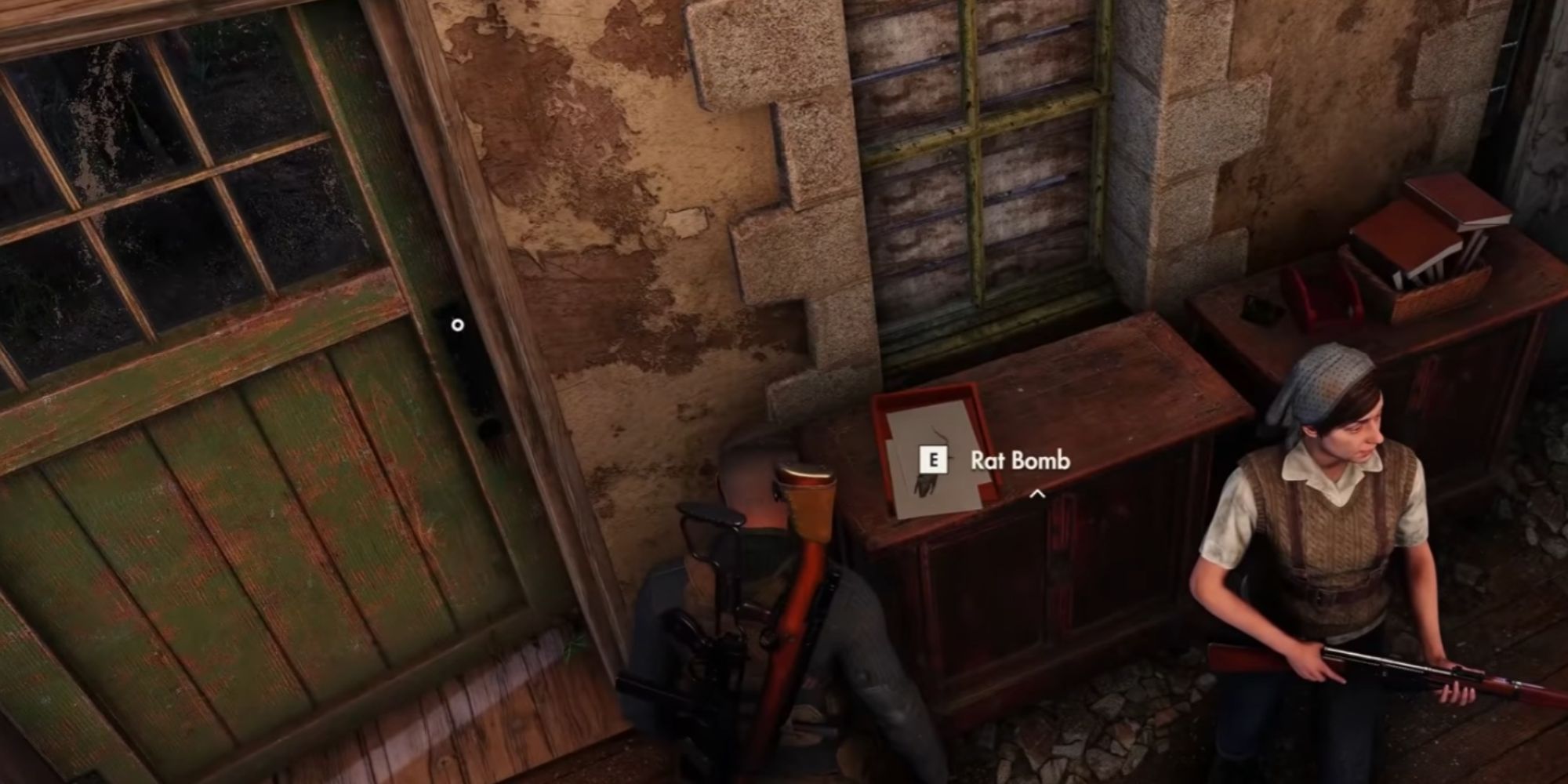 Once you start War Factory, you'll watch a short cutscene, then you take control of your character and you can leave the building you spawn inside. Pick up the Rat Bomb next to the door before you leave. A zipline is next to the building, which is available for your use immediately. 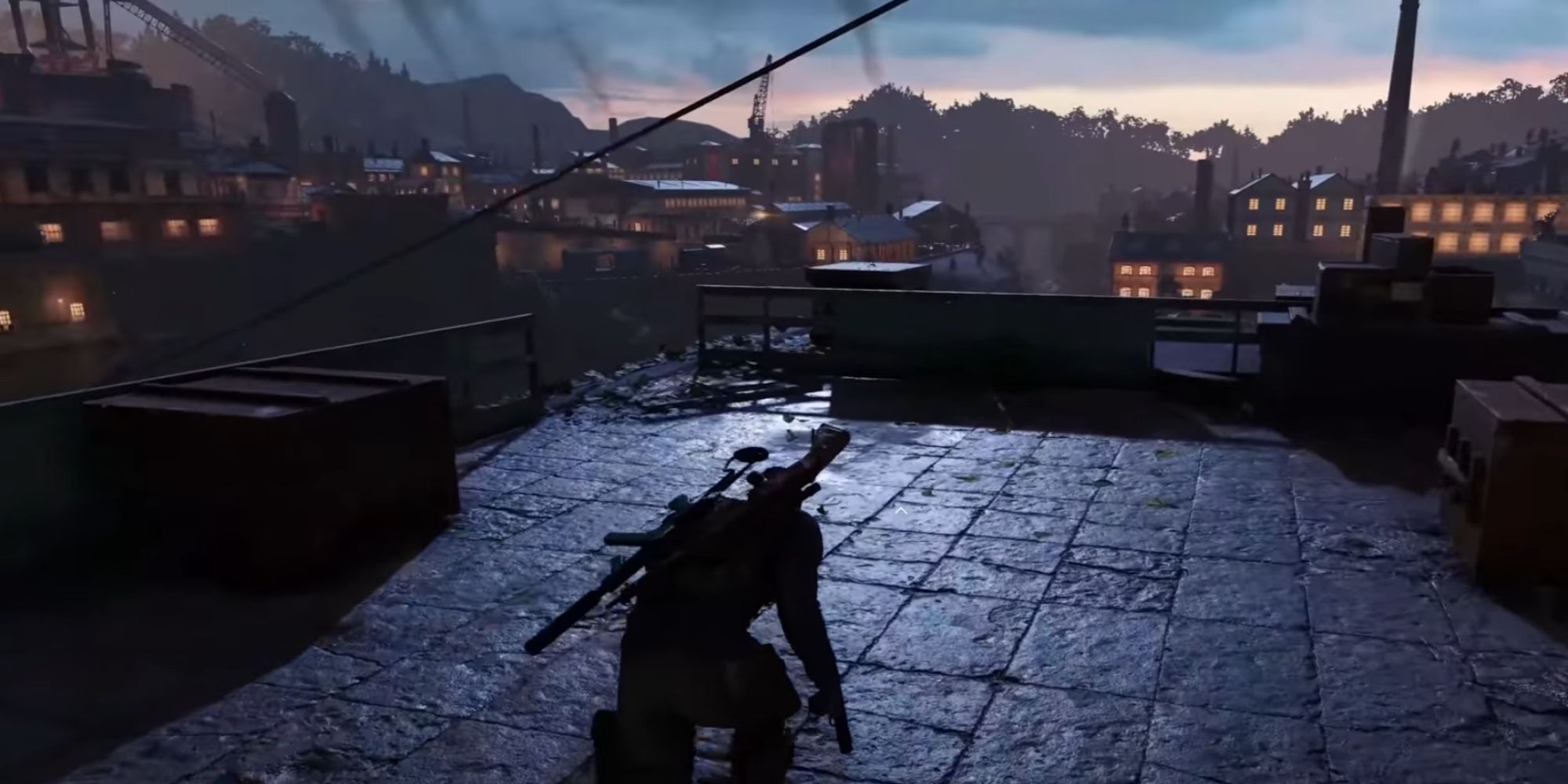 After the zipline, look through your binoculars to see many soldiers throughout each part of the visible level. You can shoot many of the enemies on the other side of the crossing with your sniper rifle from this distance, which is a great opportunity to kill soldiers with ease.

There are two soldiers left of the first zipline, but you can kill them both with a grenade without anyone detecting you. Picking them off separately by luring one away with a bottle also works well.

Now walk down the stairs next to the dead soldiers, climb the stairs to the left, and use the zipline to cross the opening. Turn right of the zipline and climb up the staircase. When you reach a dead-end, you need to climb up a group of vines on the left-hand side of the wall.

There's a soldier directly above the vines, so defeat him with a melee attack for efficiency. There's a second soldier with his back turned to the right of the first one, so use either a melee attack or silenced weapon to take him down. You can now move on to destroying the generator. 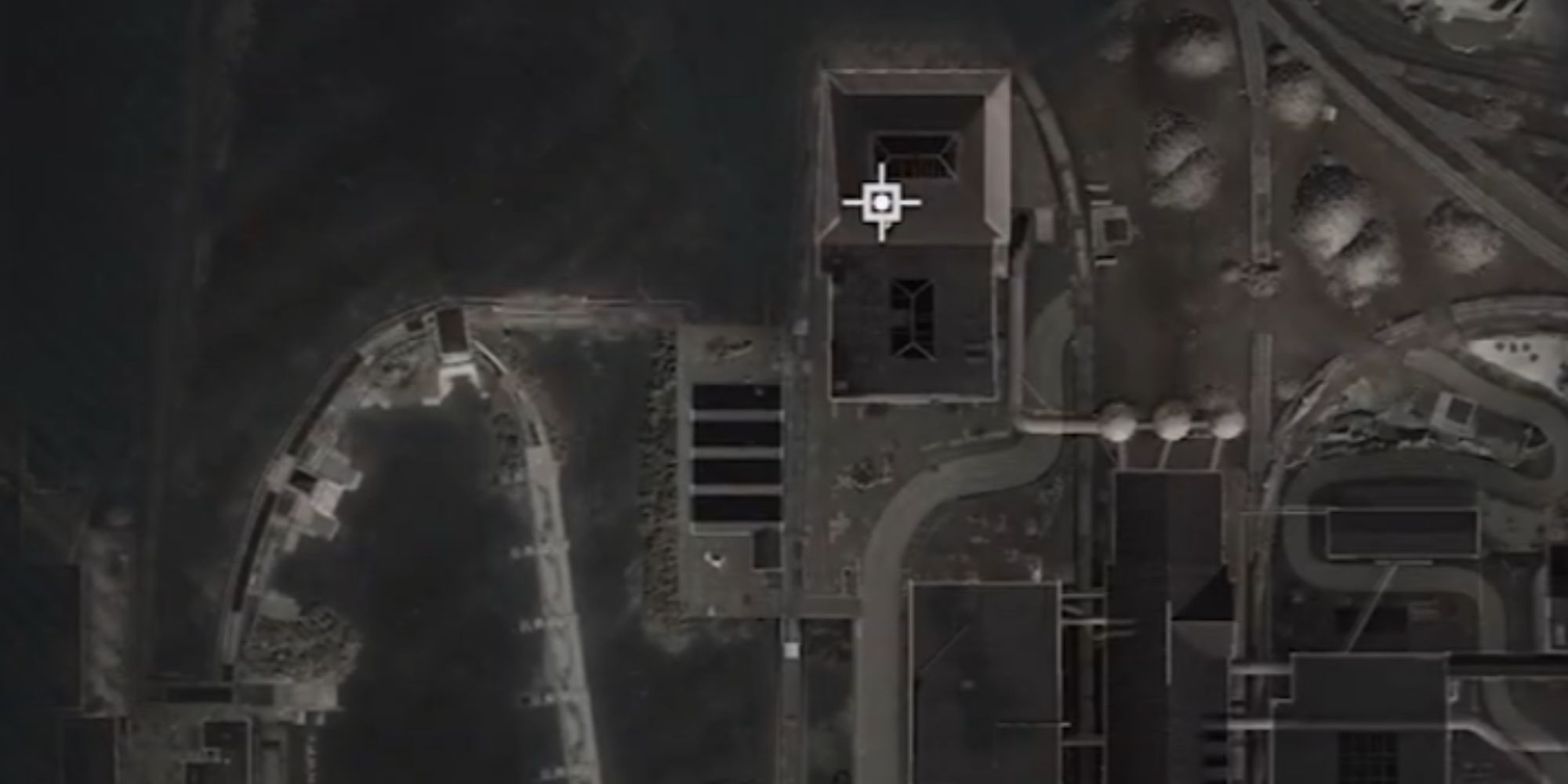 The generator is in the far northern section of the map, northeast of the second zipline you used to cross the opening. Enter the building through the front doors, defeating any soldiers you encounter. There may be enemies near the exterior, but it's dependent on enemy routes, and whether soldiers are searching for you due to a prior gunfight.

There's an office at the other end of the top floor, but you don't need to enter it to complete this objective. Soldiers can patrol the top floor of the building, so whistle and throw bottles to distract them, then go in for a stealth attack if you encounter one.

Next, use one of the staircases on either side of the entrance to get to the bottom floor. Head straight through another door and you'll come across yet another room. This room contains a few enemies. One guard walks around the room, while the other works on the machines, so his back is usually turned. 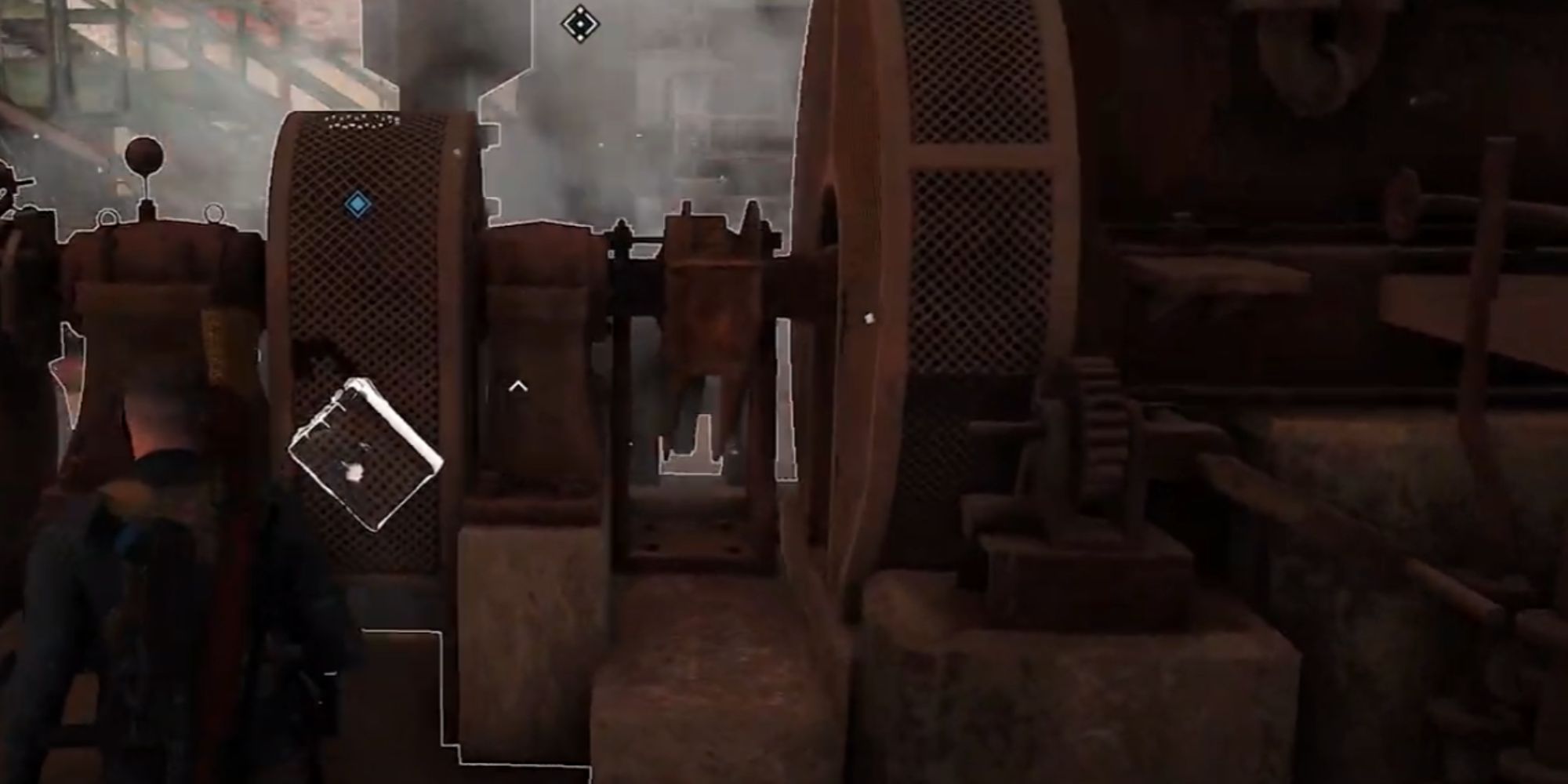 The northwestern part of the room has a machine you can destroy using a Satchel Charge, which completes the objective.

Plan B – Overload The Pressure Valves 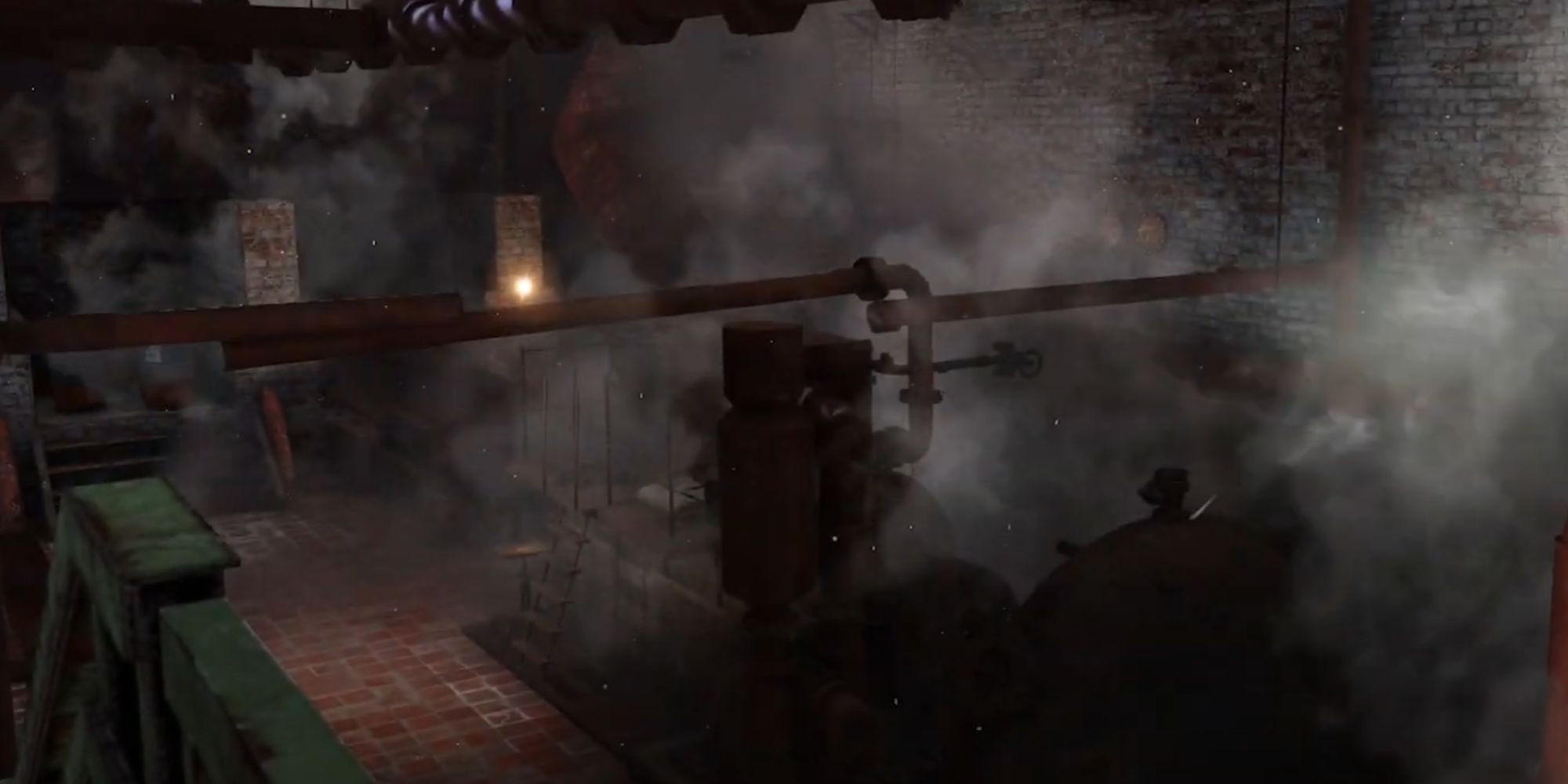 If you don't have a Satchel Charge, then you can interact with the valves to finish the objective as well. The first valve is on the right side of the generator, while the second is in the southeastern section of the room, up a tiny set of stairs. Using either method, you'll finish this side mission and can now travel south to the next objective. 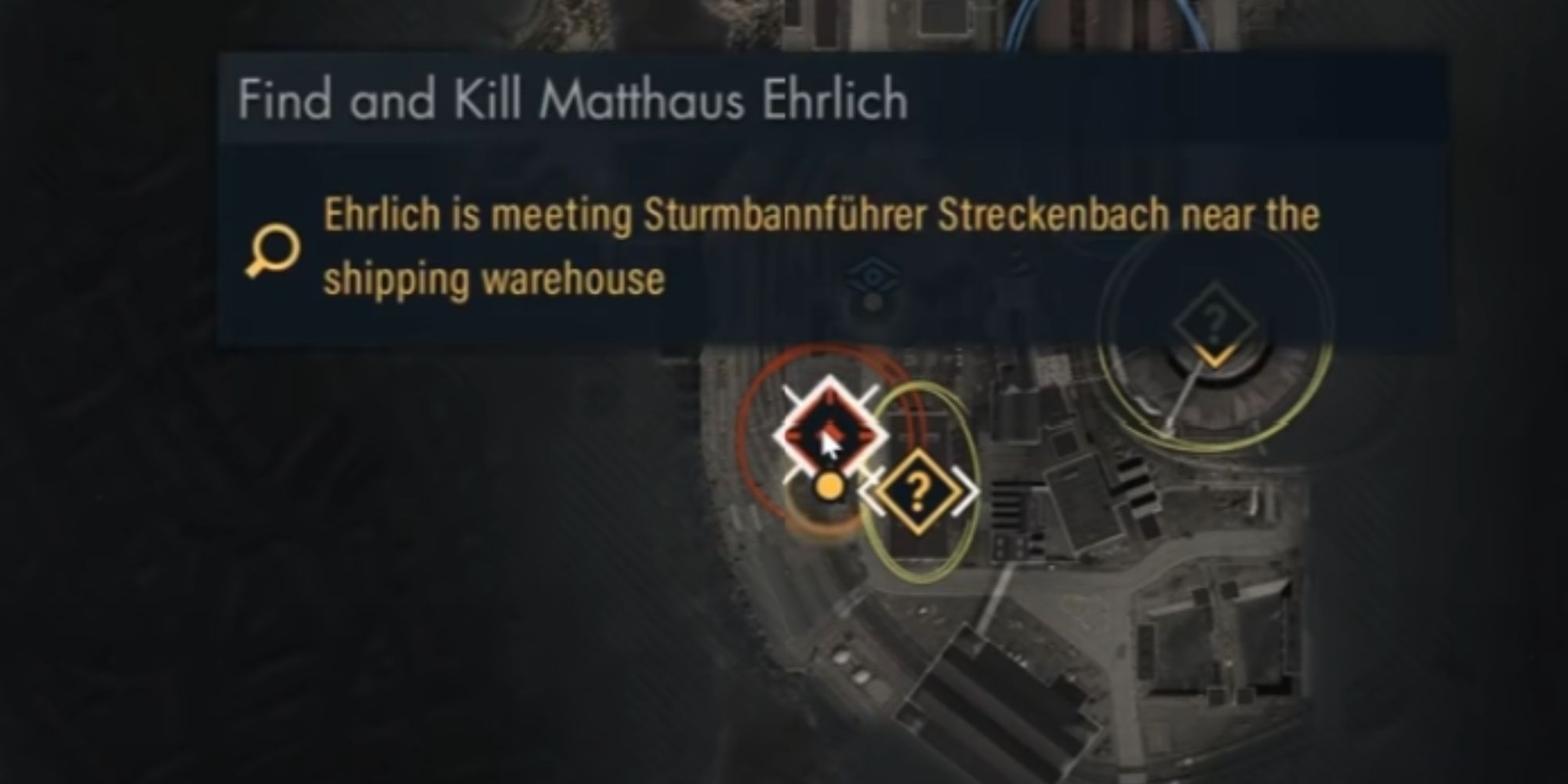 Matthaus Ehrlich is south of the generator and directly west of the manifest's location, so you can kill him before or after the manifest is in your possession. He's inside a one-story building, which is next to a small watchtower. The map above shows Matthaus' exact location.

There's a door you can lockpick and sneak through on the western side of the building, but be careful because Matthaus and another soldier will be talking when you enter. 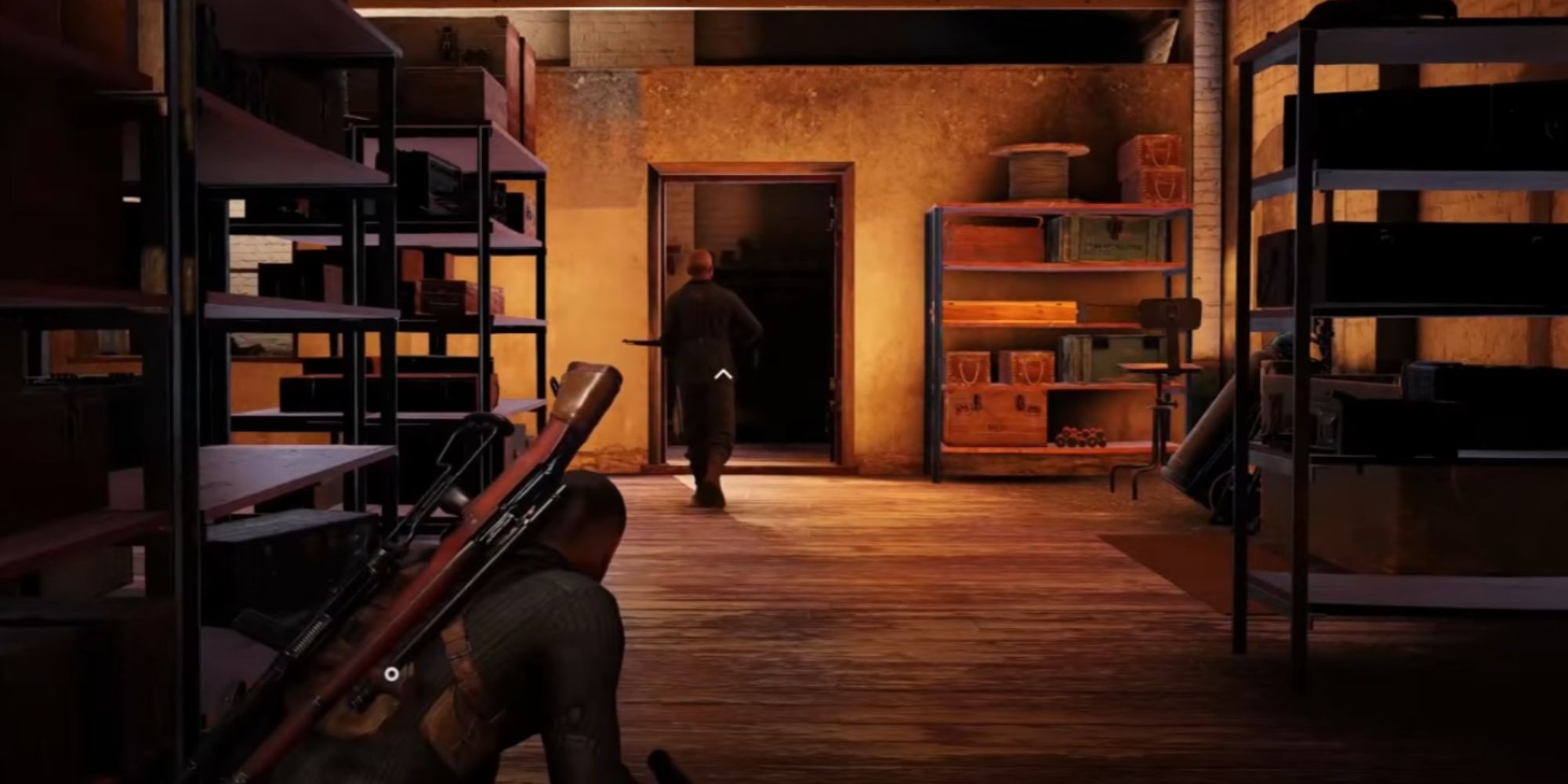 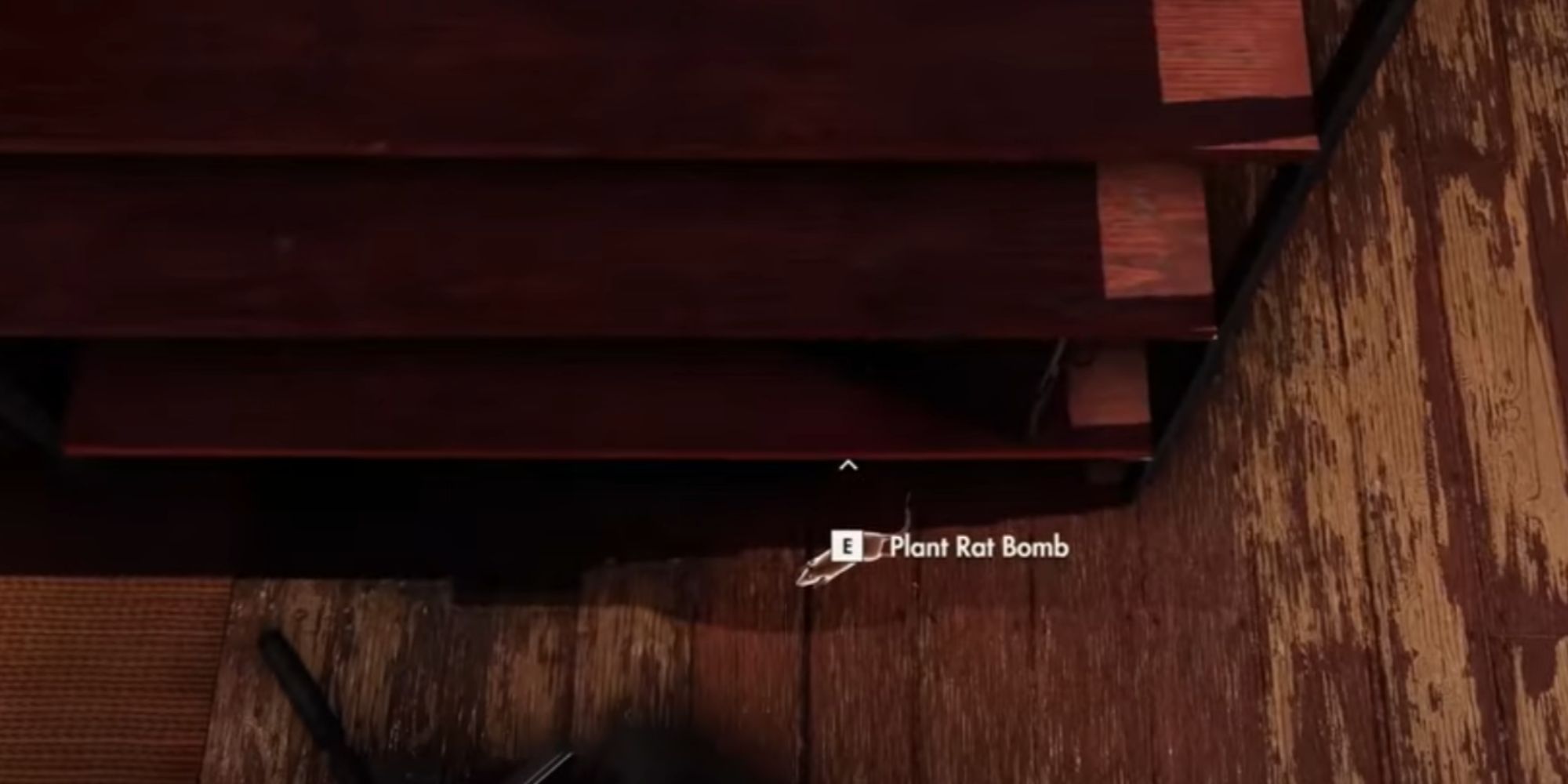 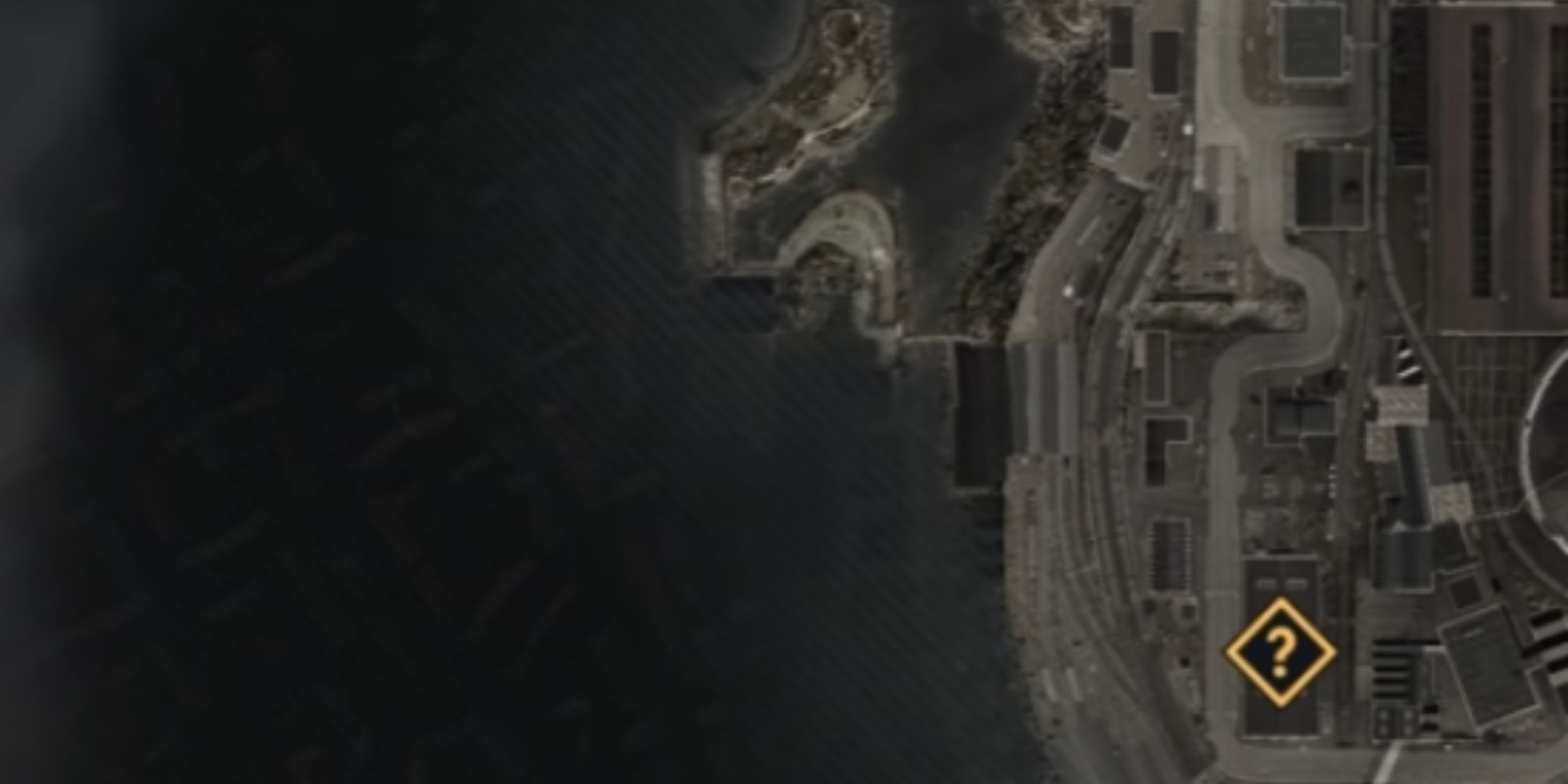 When you see the location on the map above, you're at the right location. There are multiple entrances, including the front entrance and a staircase on the backside of the building. However, the south side's front entrance works well, since killing or incapacitating the enemies inside the warehouse upon entering will make your objective easier.

The front entrance takes you to the bottom floor. Use the crates and other objects to hide, while throwing bottles and whistling to lure enemies to you to defeat.

There's an enemy that leans over the ledge of the first set of stairs, so be wary of him as you move. Now, you need to walk up the northern staircase and onto a metal walkway, which will lead you toward a small room on the northern side. 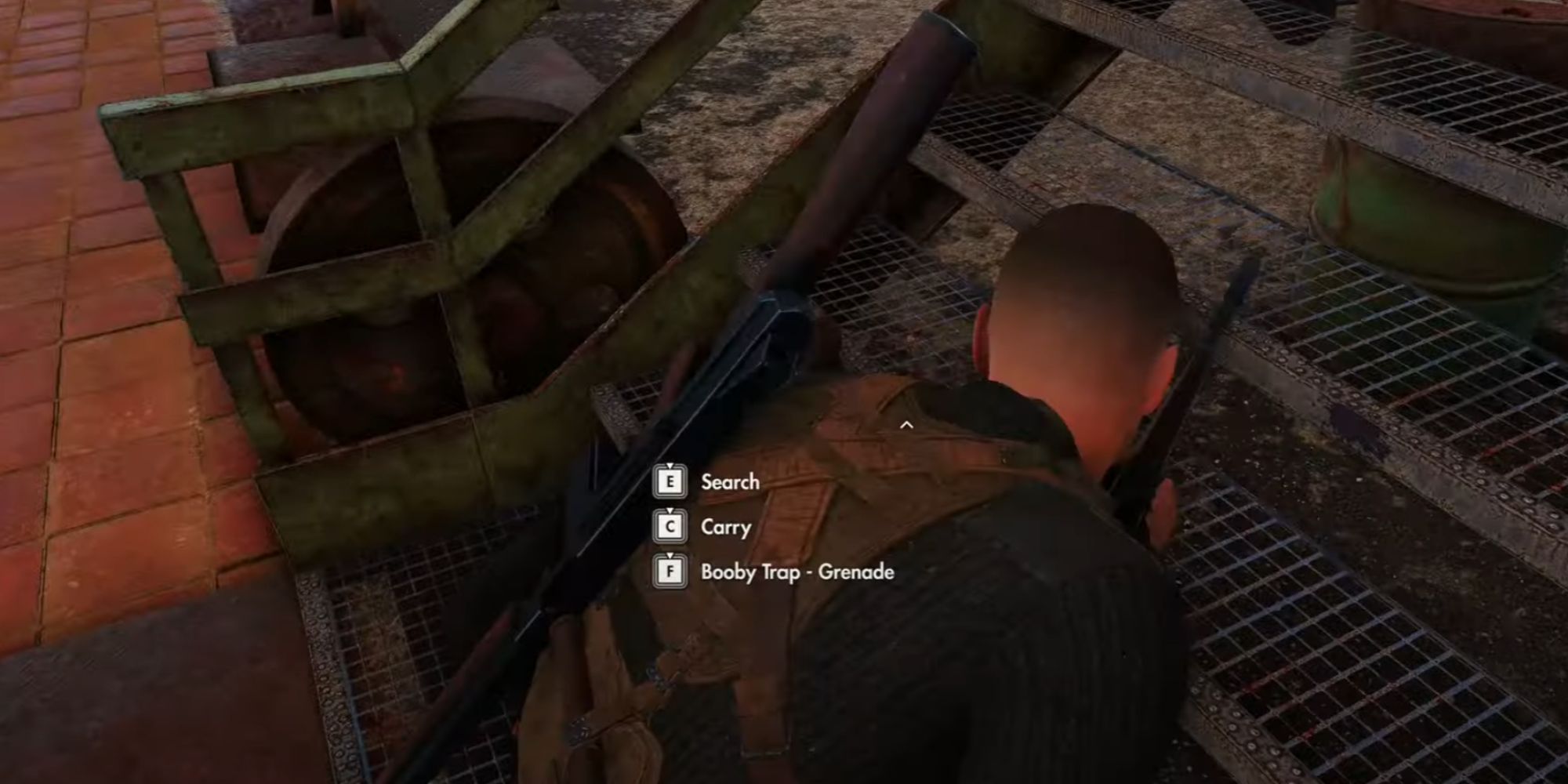 There's a soldier in the northern upstairs room that you can defeat with a melee attack. Next, search his body to find the Shipping Warehouse Safe Combination. Now, walk back down the stairs and travel up the southern staircase to reach another small room, where you'll find a safe and an enemy.

Take out the enemy and focus your attention on the safe. You can open it with a Satchel Charge, but the explosion is very loud, and is therefore not a good idea. 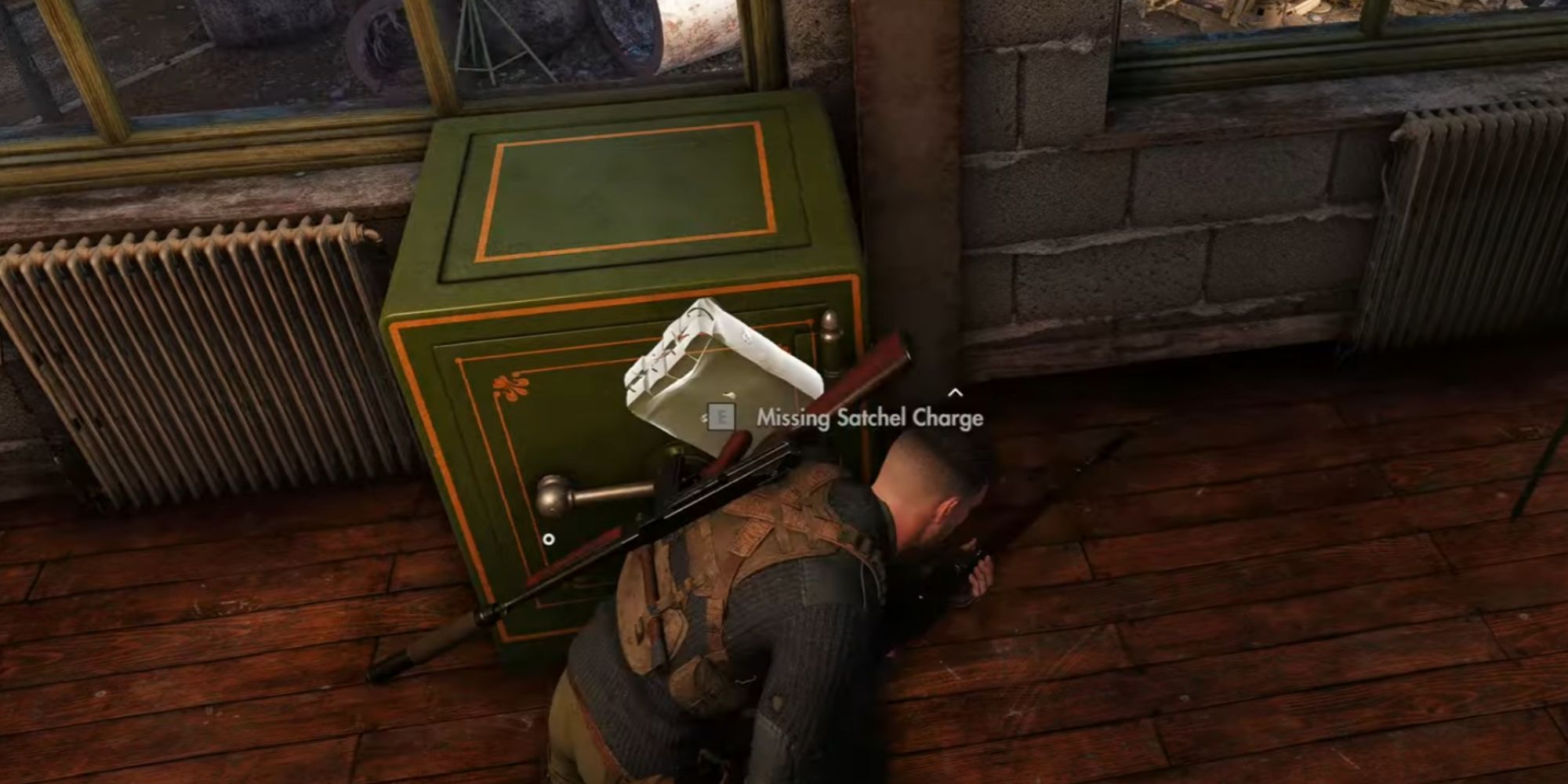 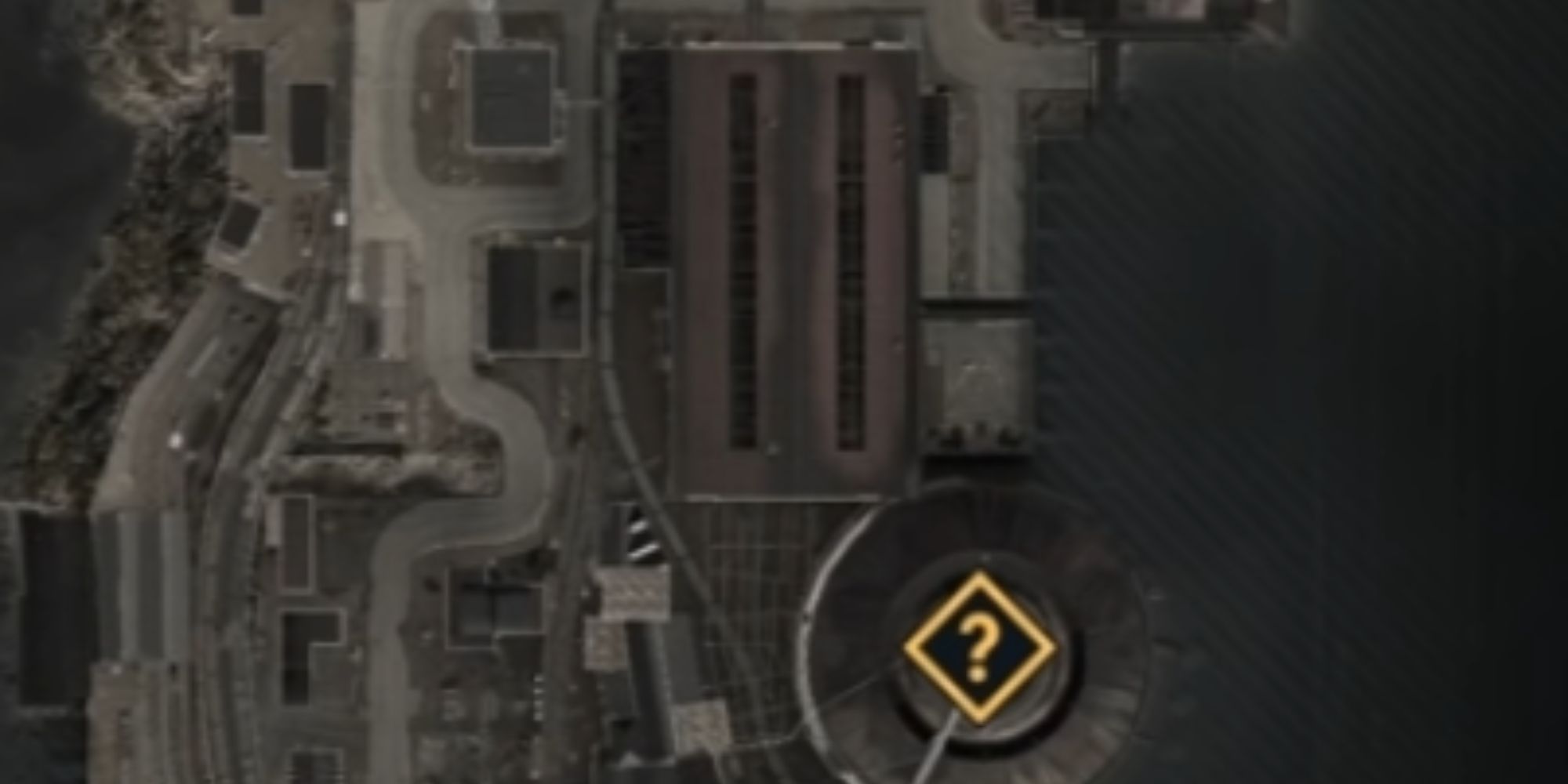 Travel directly east from the warehouse after exiting, and you'll come across a set of train tracks with an open train car you can pass through. Turn right after getting out of the train car and walk around the building until you find a door, which is where you'll find the entrance to the Furnace building.

There's a soldier outside this door, so hide behind an object and whistle in his direction, then kill him as he walks toward you.

Soldiers are all over the interior, so it's difficult to sneak through without defeating any of the enemies. Luckily, most of the soldiers aren't too close to each other, so you can defeat each of them without making lots of noise. 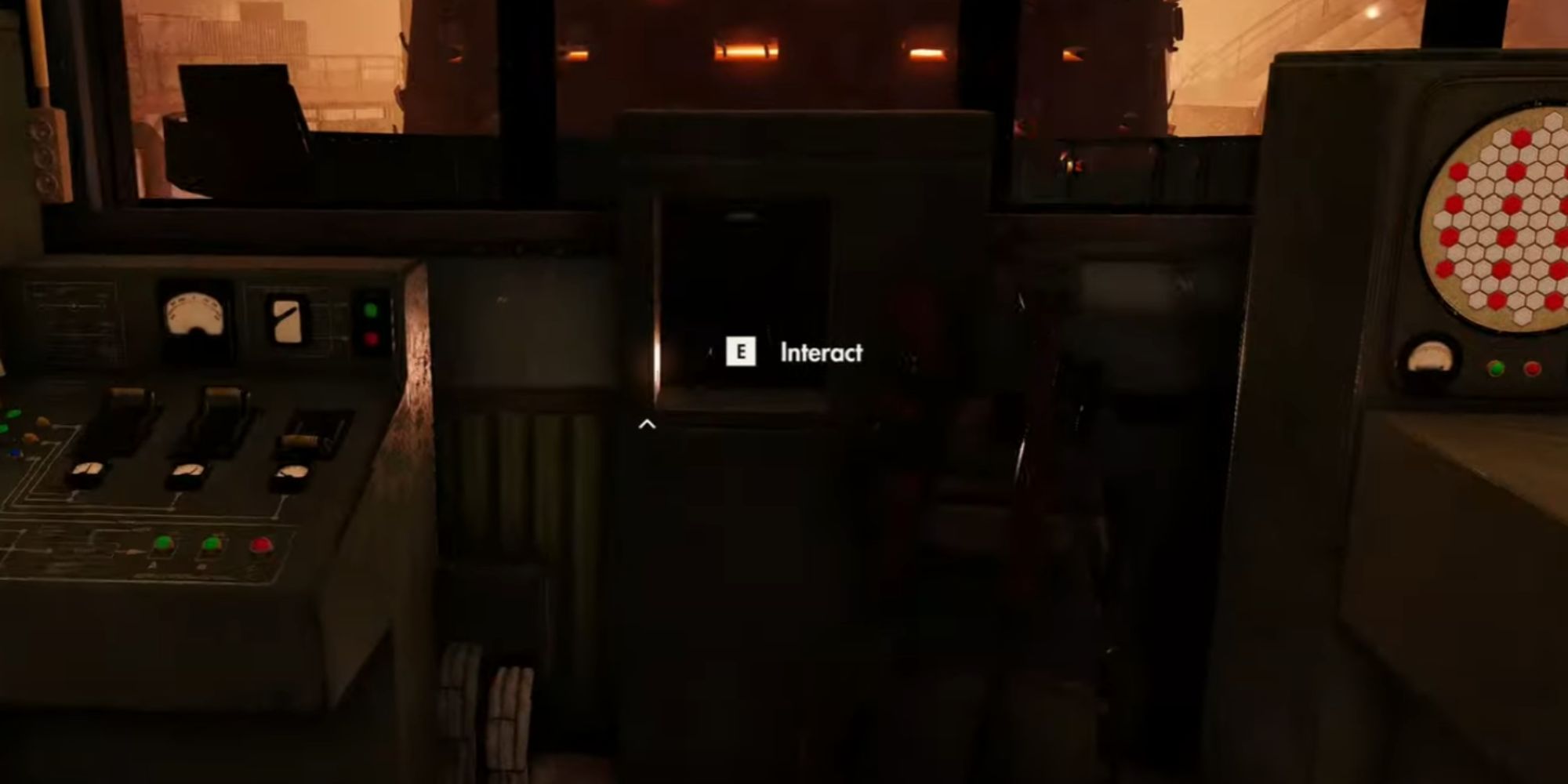 You need to interact with two objects inside the Furnace to destroy it. Firstly, you need to activate a panel that you can reach by walking up the first small staircase after the entrance, then walking along the left-hand side platform until you reach an office. You may encounter a soldier patrolling this platform, specifically on the circular section. The quest marker will point toward the panel, so interact with it inside the office. 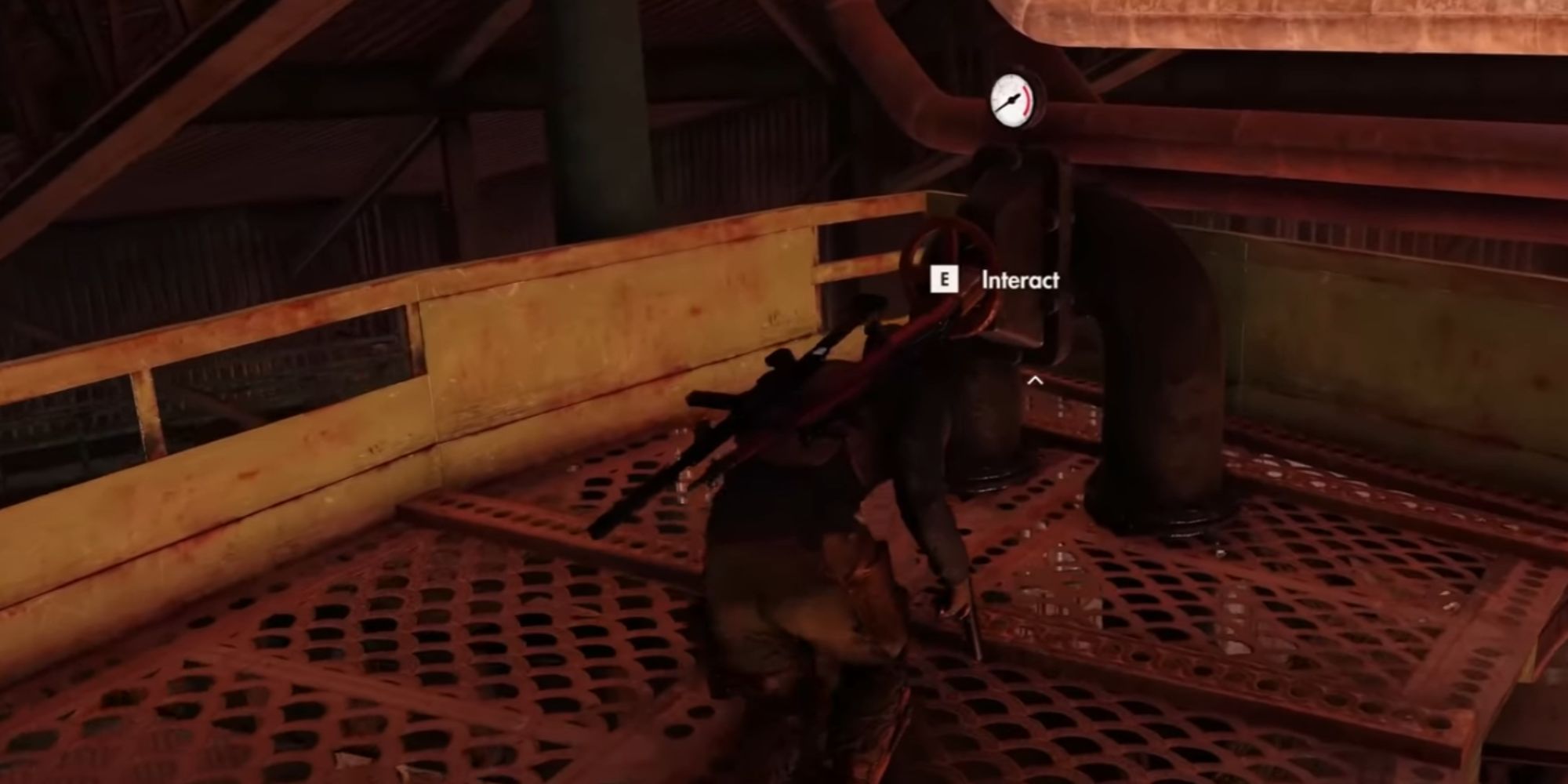 Next, travel back to the entrance and walk up the left staircase. Turn right at the top of the staircase, and walk up another set of stairs. After reaching the top and walking right around the circular platform, you'll come across a valve on the wall that you need to interact with.

Take caution to avoid any soldiers on the staircases or platforms while making your way to the valve, since they walk around the building on a set path. Now that you've interacted with the panel and valve, your objective here is complete and you can leave the furnace building. 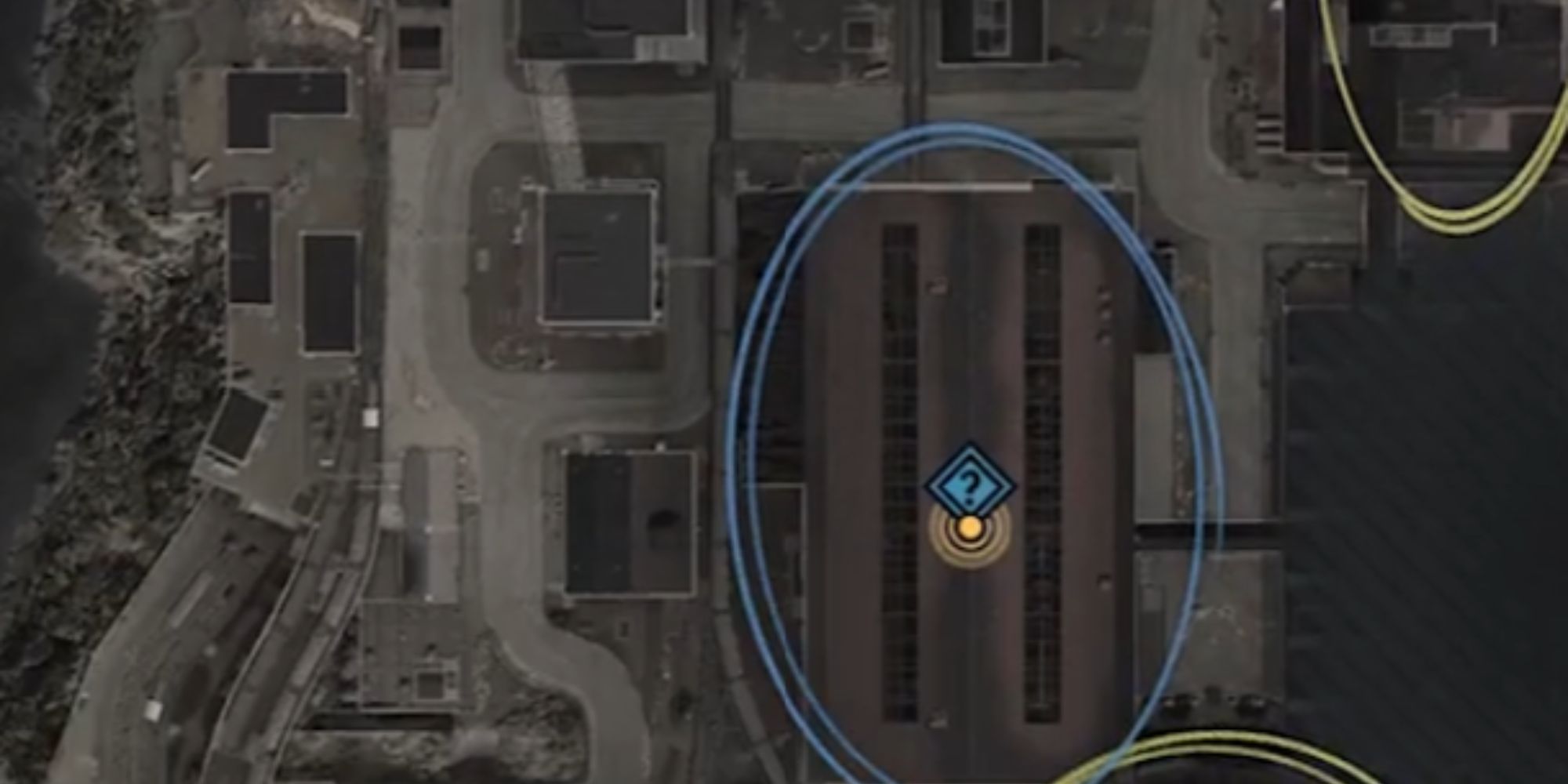 The Steelworks are directly north of the furnace building, and you can enter it by walking up a short staircase on the northeastern corner of the building, then entering through a door.

There are lots of other doors leading into the Steelworks, but this method is the fastest. Be careful of soldiers after entering the door, as they patrol on both the bottom floor, along with the upper platform. Luckily, there are dozens of objects you can use as cover to sneak past them.

You'll be on the upper platform after walking through this door, so use the ladder in front of you to climb down to the bottom floor. Now, climb down a second ladder left of the first, then use the tiny set of stairs to climb up to the next platform. You'll see an enemy working on one of the machines, so you can easily attack him while he's distracted.

Turn left after defeating this enemy, then after traveling a few meters south, you'll be in the same section of the building as a scientist. Take him out and search his body to get the Crane Control Room Key. 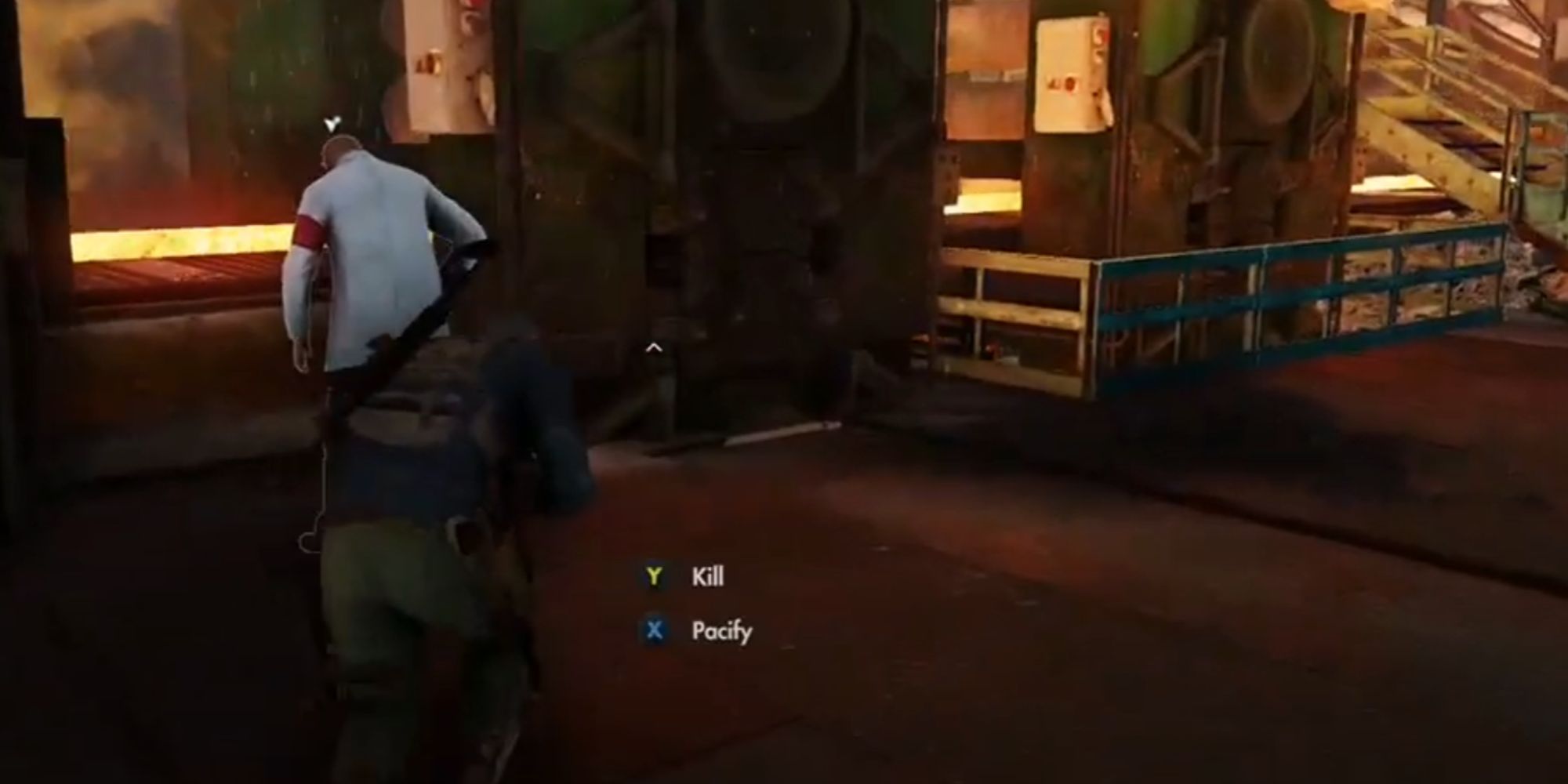 Use a ladder to your west to climb onto the platform above, then take the left-hand side staircase upward until you reach a straight platform you can walk across to the west. There's a soldier at the top of the staircase to defeat.

Follow the platform south until you reach a left turn with a locked door, which you can now open using the Crane Control Room Key. You'll encounter one soldier patrolling on the northern side of the previous platform, but you can sneak past him using environmental objects as cover.

There's only one soldier inside this room, so kill him then interact with the controls next to the window, where your quest marker is pointing. 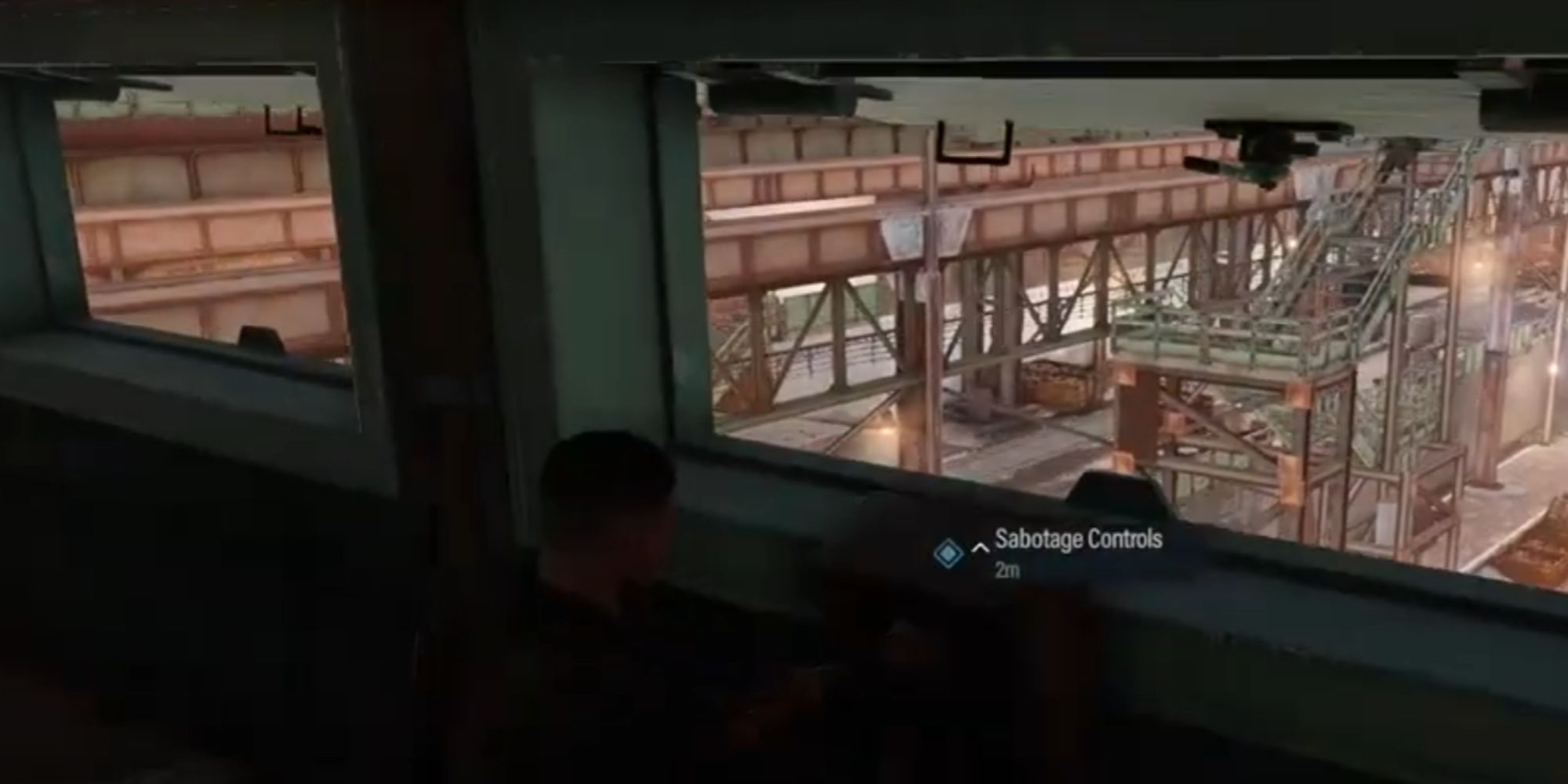 Interacting with the controls completes the objective, and now there's only one more task to finish before the War Factory mission is over. Leave the building through any of its entrances, then travel north. 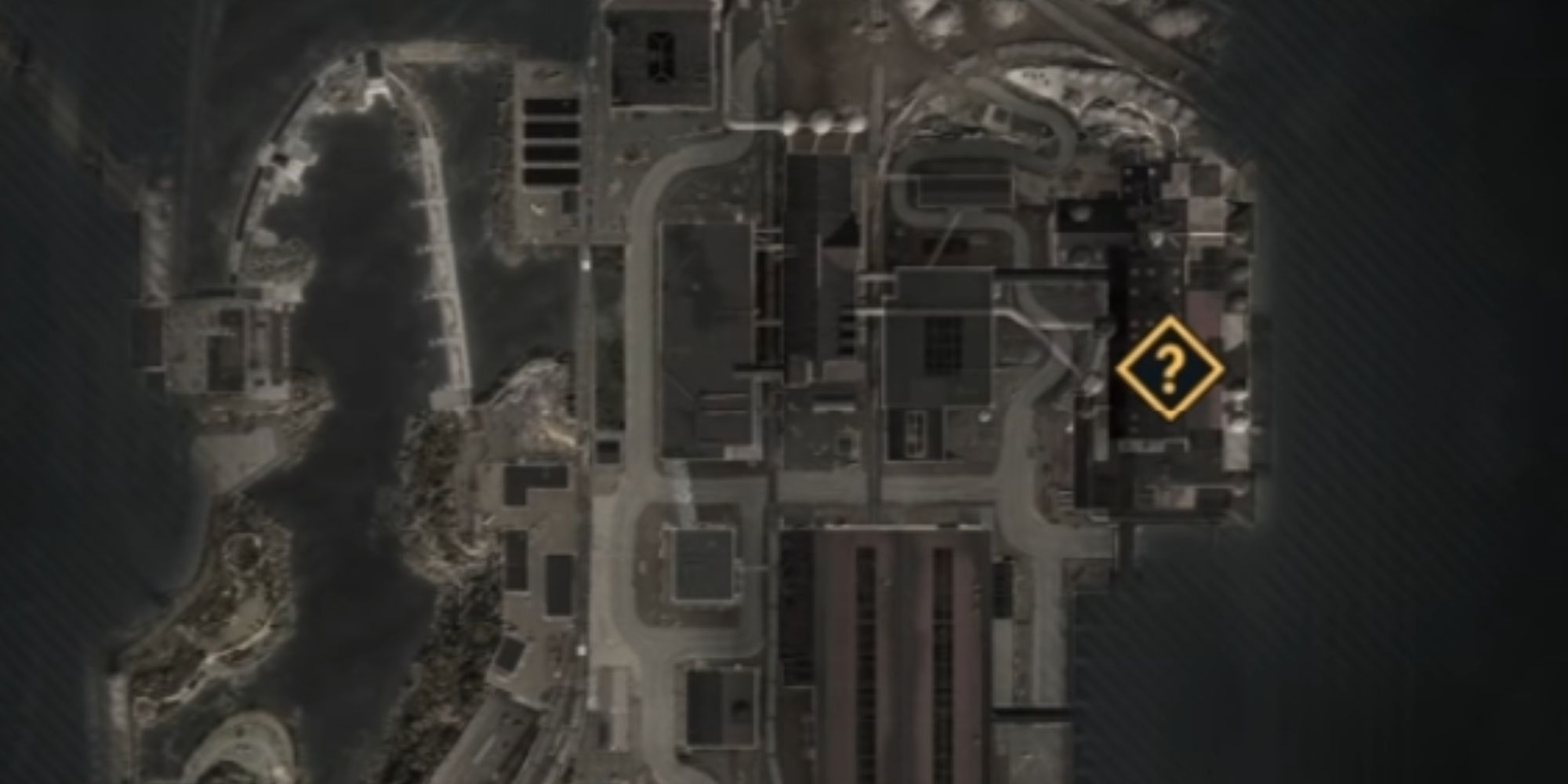 Travel north of the Furnace and Steelworks buildings to the Refinery. There's an entrance on the southwestern side that you'll reach after climbing up an outside staircase, which features an open set of green doors.

You'll encounter a few enemies on the road to the Refinery, but they're few and far between, so employ the usual approach of luring them behind cover using bottles or by whistling. 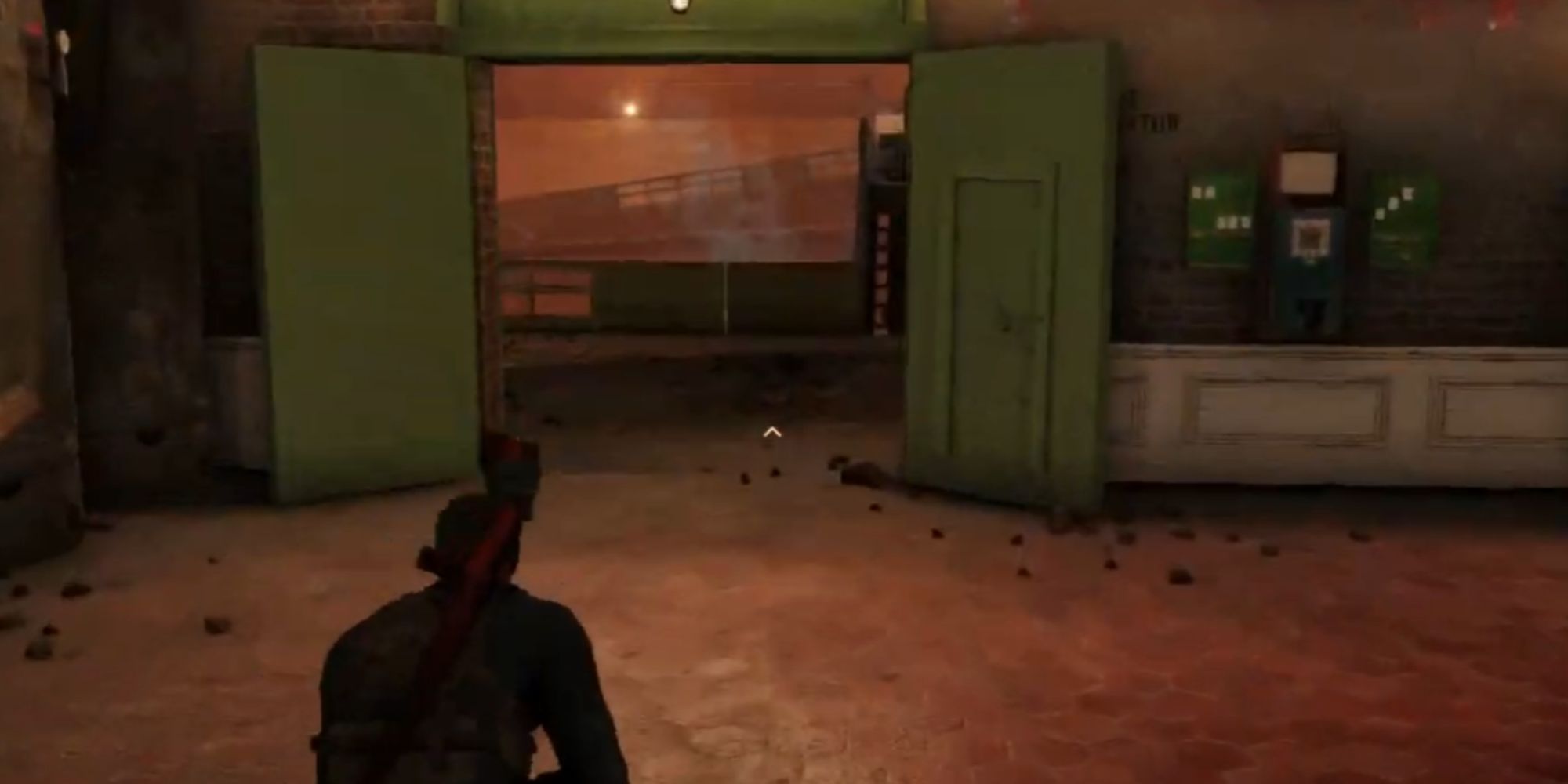 You can use the environmental objects to sneak past the soldiers or shoot them with silenced guns. Melee stealth attacks also work, but using bottles to lure them away from other soldiers is essential since many enemies are in groups. 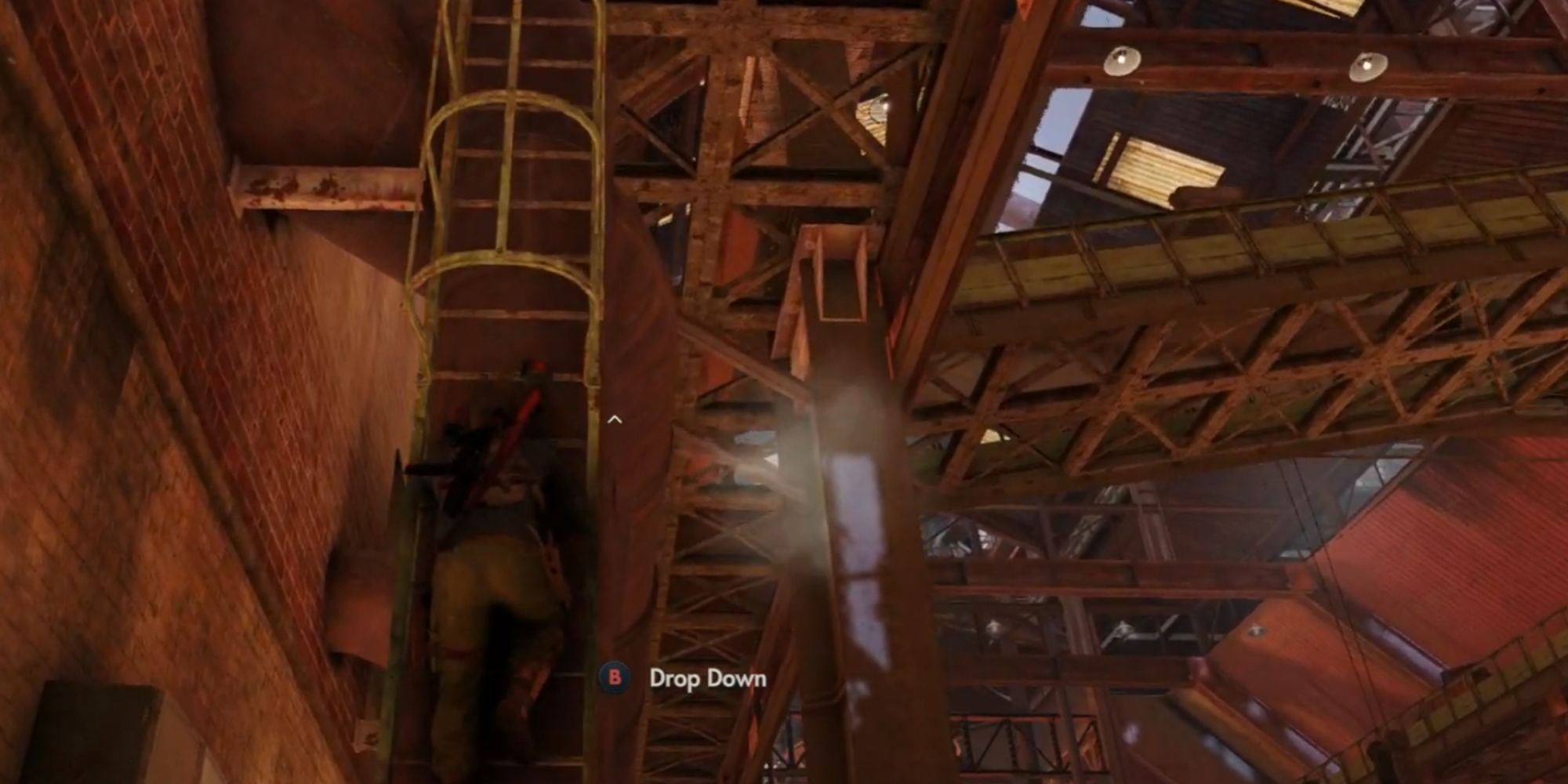 Once you enter the Refinery, turn left and climb up the nearby ladder. The ladder leads to a platform, which a few soldiers are walking around on. If you encounter a soldier, wait for them to pass you and then sneak up behind them and take them out. There's one specific soldier walking along the right-hand side of the platform, so be cautious of him.

Head to the right of the ladder, and after defeating the soldier, you'll see an object that you can interact with. Once you press the interact button, you'll damage the Refinery, and you can now leave the same way you came in. You'll need to travel south to get to the exfiltration point. 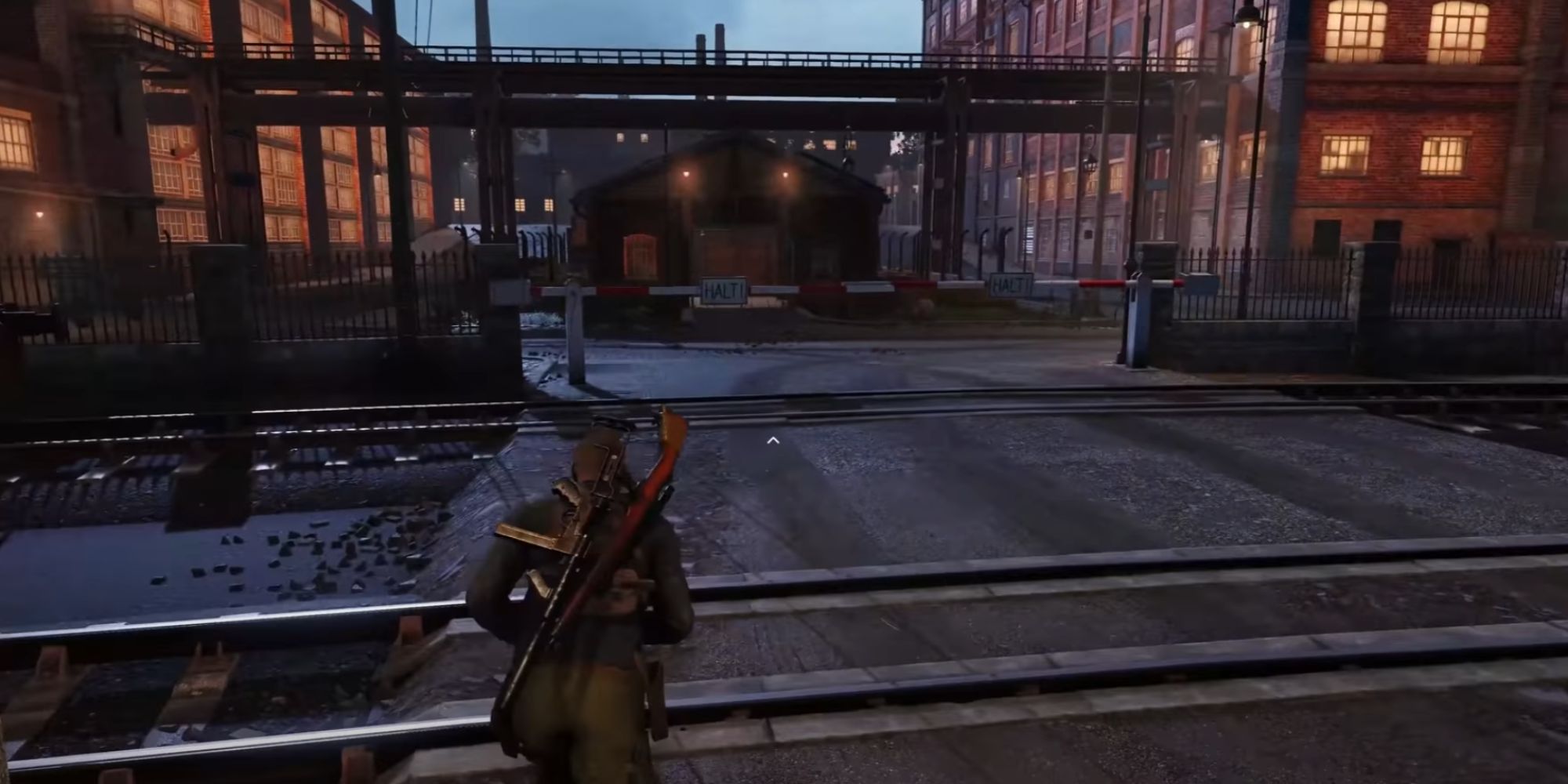 After completing every mandatory objective, you can exfiltrate to finish the War Factory mission. The exfiltration point is past the warehouse where you found the manifest, on the far southern side of the world map.

A quest marker will appear on your map, pointing you toward the location. There's a set of train tracks at this location, and upon walking past them, you'll watch a quick cutscene and then load back onto the main menu.