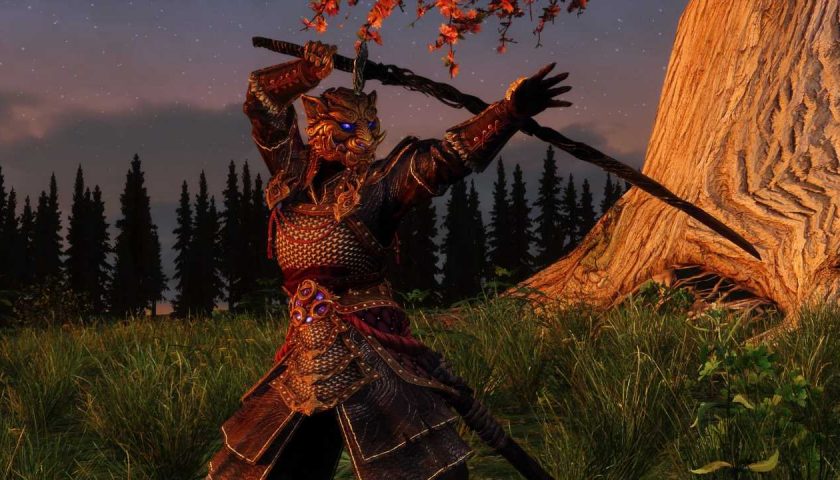 Cat parents will be familiar with the urge to make their kitties wear adorable outfits. So why then, do we ignore Skyrim's Khajiit? The nomadic felines, for all their traveling, trade, and secrets, have no choice but to wear clothes and armour that looks primarily designed for the more humanoid races. With the knowledge that these caravan cats possess, they surely know a thing or two about smithing.

Perhaps the knowledge of Khajiit armour smithing is lost on its people, but it appears to have been unearthed by a modder named Deydranos. They have added a beautiful set of armour, primarily made for the Khajiit race, called the Lunar Guard armor (thanks, PCGN). The helm is crafted in the shape of a growling Sabre Cat with glowing blue eyes, followed by an ornate breastplate and belt. And, as if Khajiit claws weren't enough, the gauntlets come with spikes on the knuckles.

"The Lunar Guard armor is a craftable heavy armor, heavily inspired by the khajiit," says the description of the mod. "I felt like there weren't a lot of lore friendly armors that catered solely to them, hence the creation of this armor mod. The name of the mod is derived from the Bi-Lunar Guard in Elder Scrolls lore.

"The armor can be worn by any gender and race. It also has weight sliders. The helmet and cuirass meshes are tweaked depending on race. There are 3 versions of the helmet and cuirass; 1 for the khajiit, 1 for the argonian and 1 for all non-beast races," it continues. "The body proportions for the male version are based on the vanilla body, the proportions of the female version are based on the CBBE body. The armor covers the entire body, so the armor works with anybody mod as long as you wear all pieces at once."

This is a nice little addition to the game, and it helps that it's lore friendly. Most of the armours you find in the base game, or via mods are targeted towards men or elves. The Lunar Guard armor adds some flavour to the mix while also serving everybody's favourite race.