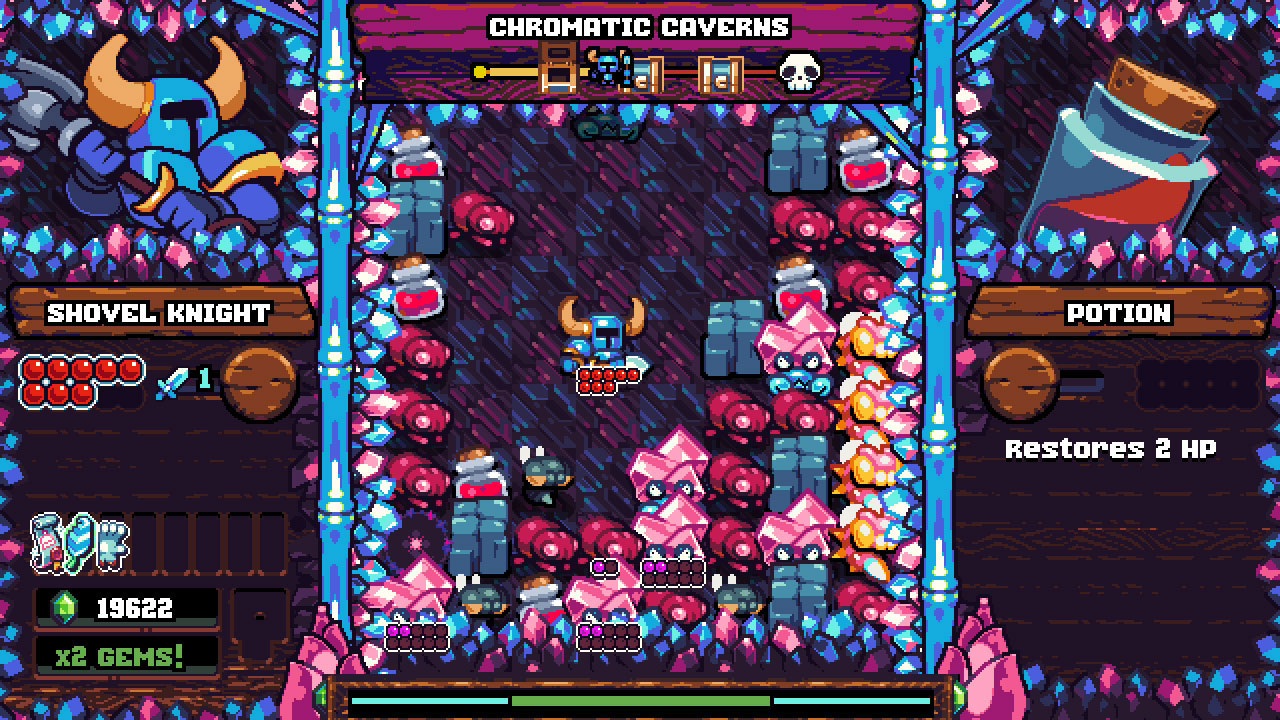 Indie darling Shovel Knight gets his first spin-off, with a fast-paced roguelite puzzle game that looks as good as it plays.

There have been so many major franchises celebrating their 25th, 30th, and even 40th anniversary in the last year or so it’s hard for gamers of a certain age not to feel older than they already are. If younger gamers want a taste of the same medicine though, consider that Shovel Knight, once the bright new star of the indie gaming scene, is now over seven years old. Which is peculiar because in all that time there’s been almost no talk of a sequel.

Creator Yacht Club Games have said that a follow-up is inevitable, but little else, instead concentrating on the original’s various expansions and now this brand new spin-off. Pocket Dungeon is primarily the work of developer Vine though, which perhaps suggests that Yacht Club is already busy with Shovel Knight 2. In the meantime though, this will do very well indeed.

One glance at a screenshot will tell you much of what you need to know about Pocket Dungeon, since it’s a tile-matching puzzler of a sort that’s haunted consoles and smartphones for decades. And yet the game is not nearly as generic as you might first think, in terms of either the puzzle elements or the roguelite structure.

The current king of tile-matching games is Capybara’s wonderful Grindstone and Puzzle Dungeon certainly does bear some comparison with that, since you control Shovel Knight himself (and a range of other characters) directly instead of just an anonymous cursor.

You clear out enemies in a similar manner to all games of this sort – matching those of the same type so that they’re all defeated at once – but because you’re in the stage with them that means you have to be careful about where you end up at the end of a move.

Rather than being strictly turn-based, a timer indicates when enemies will move, in addition to doing so every time you do. This means that not only is the 8×8 grid in which each stage takes place constantly changing its layout but, unlike more sedentary puzzle games, your character is always under attack. As a result, the most likely reason for you failing a stage is simply that you were killed, since almost every action you perform results in some loss of health.

The constant pressure this puts you under gives the game a much faster pace than most puzzle games, and yet even at the start it never feels overwhelming. That’s impressive given the number of complications that are slowly introduced, from enemy types that disappear after you hit the first one or the problems of the constantly decreasing gem meter, which encourages you to take your next move as quickly as possible.

Collected gems are used to buy permanent relics which range from simple buffs to items that can add electricity damage to your attacks. Temporary relics can also be found in a stage, if you collect the necessary key for its chest, which ensures you’ve always got a varying range of abilities and assists on hand.

Additional depth and variety is added via the wide range of alternative characters, most of which are recognisable from the franchise’s expansive lore and have their own pros and cons. Spectre Knight, for example, only regains health by defeating enemies and loses it when quaffing potions, while King Knight has a charge attack that also causes damage to himself. Each new character has to first be defeated as a boss, which adds a nice sense of progression.

This is a roguelite though, so it’s possible to lose all your items and essentially have to start again, even though you can skip ahead to later stages whenever you want. These are almost impossible without relics though and while this is only a roguelite – so there’s a lot of unlocks, including the extra characters, that remain even after you’ve died – you do still have to do some groundwork when starting a new go.

The main Adventure mode is not very long but it is quite difficult, although the game is filled with accessibility options that can change that. As with the mainline games, the storytelling is surprisingly good, with a number of new characters that seem likely to appear in the sequel. There’s also an entertaining versus mode you can play against either humans or the computer, although strangely there’s no online multiplayer – so you have to play locally.

Pocket Dungeon may not be the Shovel Knight sequel fans have been waiting for, but it’s been created with the same level of love and craft, and equally endearing retro visuals (although here they’re closer to 16-bit than the original’s NES inspired graphics). It’s one of the best new puzzle games of recent years and enjoyable enough that even those that have never played the original will still dig it.

In Short: Shovel Knight’s first spin-off is just as good as his mainline games, with a clever take on tile-matching puzzlers that offers an enjoyably unique challenge.

Pros: Impressively original gameplay, with the emphasis on combat and health ensuring a much faster pace than usual. Fun characters and great retro style graphics.