Dx2 Shin Megami Tensei: Liberation will feature a collaboration with Berserk, as part of a cross-promotion with the 3DCG anime series.

Dx2 Shin Megami Tensei: Liberation is a mobile game based on the famed Atlus RPG series. The game has featured collaborations with characters from different franchises in the past, including Bayonetta and Devil May Cry 5. The latter collaboration is a reference to the fact that Dante once appeared in Shin Megami Tensei III: Nocturne in a bizarre cameo, due to a deal between Atlus and Capcom. 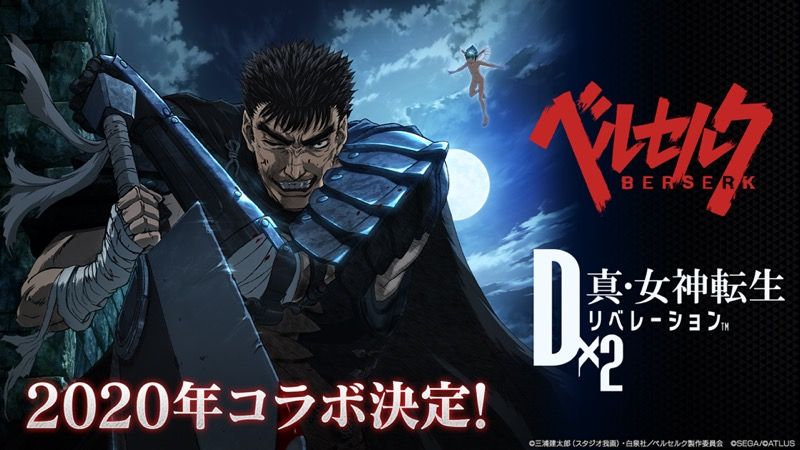 The Berserk anime series that started in 2016 uses 3D computer-generated artwork instead of hand-drawn animation. Fans were highly critical of the art style during the show’s initial launch, due to a number of mistakes and several lazy attempts at creating movement, the most infamous of which involves Guts bobbing up and down while walking, which made him look like an action figure being held by a child.

The exact nature of the Berserk/Dx2 Shin Megami Tensei: Liberation crossover is unclear at the moment, but if there is one thing Guts loves to do, it’s butcher demons with his huge sword, so he shouldn’t have trouble fitting in. It’s possible that some of the Apostles from Berserk could be summonable by the player in Dx2 Shin Megami Tensei: Liberation, but they might be overpowered if they are true to the anime. Jack Frost isn’t going to last long against the God Hand. Sega has promised to reveal more details about the collaboration soon.