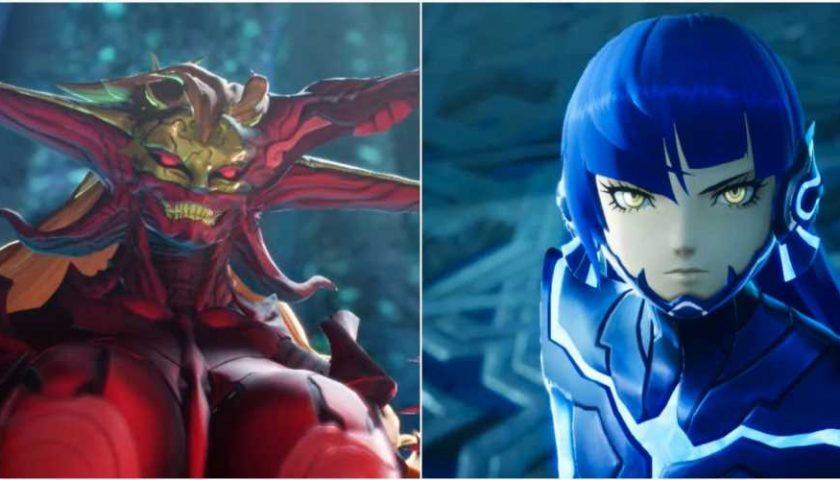 Shin Megami Tensei 5 has never been a pushover. Even gimmicky bosses like Arkangel Abdiel posed a unique threat that could leave even the hardiest Nahbino weeping in the sand. If you thought Abdiel was a pain before, then Abdiel in her true Nahobino form will be akin to a fiery nightmare.

Every Nahobino in Shin Megami Tensei 5 is a threat, but none compare to the power of Abdiel. Unlike most enemies, she starts strong and only gets more powerful as the battle rages on. This fight can end in an instant, so go in prepared, or don’t go in at all. 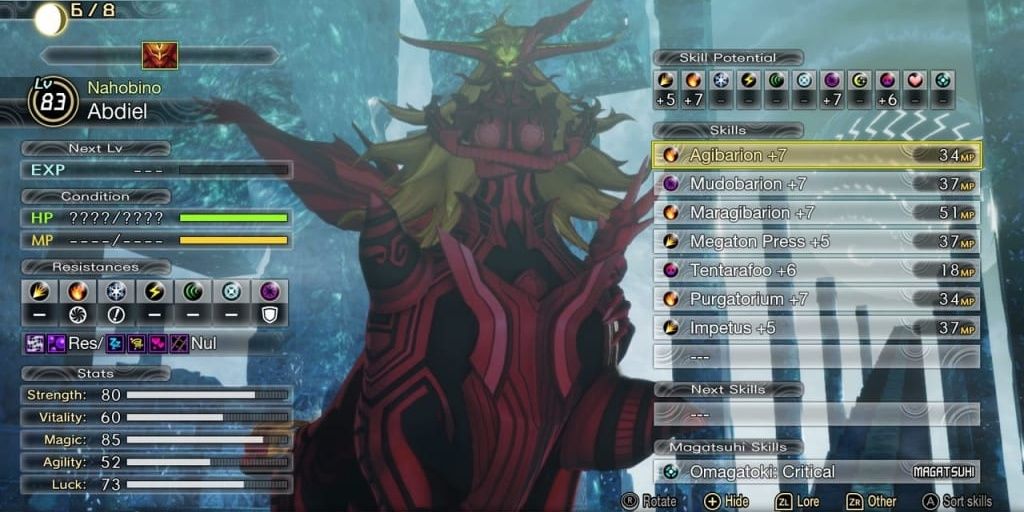 As you can see, Abiel has abandoned her holy ways and followed in the footsteps of Lucifer himself. Her weakest Potential, Physical, is still dangerously high. Whilst her Potentials in Fire and Dark attacks are the highest you’ve seen to this point. Finally, Abdiel is surprisingly potent with Status, which only really affects one of her skills.

Abdiel backs up these fantastic Potentials with a Statline that screams pain. Her magic stat is a whopping 85, and this is supported by her Strength stat of 80. When Abdiel attacks, no matter how she decides to do it, she’s going to hurt.

Not only that, but Abdiel has a disturbingly high Luck stat of 73 which directly influences her Critical chance. This is a big deal because Abiel has a fair few Physical attacks in her arsenal – some of which are game-ending.

Agibarion and Mudobarion will be the two skills Abdiel uses the most during the early parts of the fight. These attacks can do serious damage if you don’t have at least a resistance to them. Under no circumstances go in with a weakness to either, as this will probably end in instant death – even without the instakill effect of Dark magic.

Because Abdiel only has one Dark attack, you don’t need to put too much effort into getting your party fully immune to Dark damage, however. Focus on Fire and Physical.

Maragibarion is the AOE form of Agibarion, and it can do a lot of damage if you aren’t ready for it. Because this skill exists in her kit, it is highly advised that you bring along demons who are immune to Fire, whether natively or via transfer.

Megaton Press is Abiel’s weakest attack, and you want her to use it as much as possible. Its comparatively low damage paired with its low accuracy makes it a very unreliable damage source for Abdiel, and a very reliable turn sink for you. If you have Physical Block or Physical Repel, then this skill is made even worse.

Tentarafoo is more of a pain than an actual threat. Confusion can mess with your party, so make sure you have items on hand to clear it. You don’t want to use spells necessarily since Mana on your support demons will likely be rather tight.

Purgatorium is Abdiel’s strongest attack. There is no defense against it, and unlike the other Nahobino fights, it is not locked to her Magatsuhi. Once she has hit the health threshold to cast it, she can cast it at will. The only way to deal with it is to have enough health to tank the hit.

Impetus, whilst not as dangerous as Purgatorium, is still strong enough to build your entire party around. This attack, combined with Abdiel’s Luck and Strength stat, is capable of wiping out your entire party if it lands a Critical. Abdiel can only use this attack once she is near death, however. Unlike Purgatorum, this attack does not pierce, meaning it can be resisted, blocked, drained, and reflected.

Makarakarn is a big deal in this fight. It shuts down any magical offensive you have planned for that turn, which is not good. As a result, you need to have a strong lineup of Physical demons on hand to keep the damage flowing.

Luster Candy is way too powerful to ignore. Abdiel is already a powerful foe, and any buffs risk scaling her out of control. You will need to counter this with debuffs, or spells that can strip buffs.

Of the two Depraved enemies, the Depraved Wing is the most dangerous and should be killed as soon as possible. If left to its own devices, it will wreak havoc on your party.

Depraved Arm, whilst not as threatening as Depraved Wing, is a must-kill target before you continue working on Abiel. Madness Nails is not a threat, due to the Physical damage being easily countered. However, Masukukaja tightens up Abdiel's accuracy and evasion, which is not a good thing.

Bring demons who can strip buffs, and Depraved Arm out once Depraved Wing is down.

Abdiel is only weak to Ice, which is a pretty big deal because there aren’t many Ice demons that are worth taking into this fight. The ones that are, are weak to Fire, so they will need some work to be usable. On top of that, Abdiel drains Fire and blocks Dark. Thankfully, Abdiel is not resistant to Physical, and this is the easiest way to deal consistent damage to her. 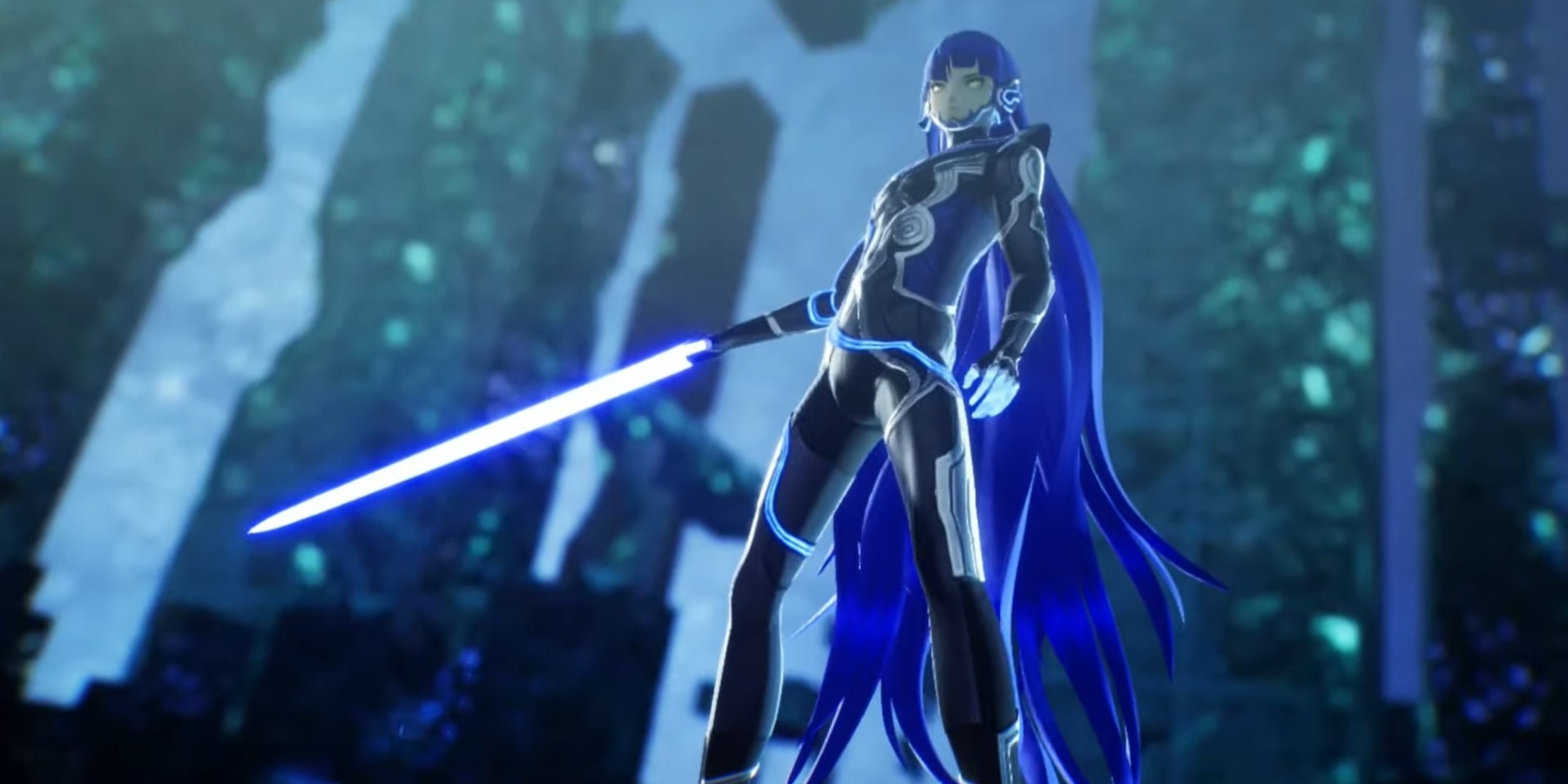 Because Abdiel is such a powerhouse when it comes to Fire, Ice demons are not recommended, although some can be taken if you want to go down that route – be prepared to put in a bit of work, however.

Physical Demons, as is usually the case, are where we are going to focus our attention, whilst also throwing out some potential supports to deal with Abdiel’s nonsense.

If you want an Ice demon, Arioch is the go-to demon for this fight. He comes in at level 75 base, has decent stats, and has great Potentials. Where Arioch shines, however, is in his weaknesses – or lack of them. Unlike most Ice demons, Arioch is not weak to Fire, and as a bonus, he is resistant to Dark.

His skill pool is also impressive, with the likes of Bufubarion and High Ice Pleroma hiding in his unlocks and giving him a real weight in combat. He will do the numbers and generate the turns – a great demon to have in your roster. Consider transferring Fire and Physical resistances for that extra layer of defense.

Arioch is a Special Fusion demon, which is his only downside. He can be pretty expensive to summon, but he comes pre-equipped to do work in this fight.

Skadi is one of the better Ice Demons you can take, but it does come at a price. Skadi is only level 67 at base, which means you are going to have to level her up at least 10 levels for her to pull her weight against Abdiel. Even if you didn’t push her that high, you would still need to grind to unlock Bufubarion on her base kit.

Not only that, but Skadi is weak to Fire, which makes her a liability as standard. You will need to transfer Fire resistance – ideally block – if you want to make Skadi work. To push her even higher, consider skills like Concentrate, Ice Pleroma, and Life Spring.

Once she has been built for purpose, Skadi is very good in this fight. Her damage is respectable, and she can generate bonus turns per round. It’s a lot of investment to get her to this point, however.

Kali is almost a perfect match for this fight. Putting aside her fantastic stats and Potentials for a moment, Kail is natively immune to Fire and reflects Dark. This cripples Abdiel’s offensive, and with only a transferral of Physical resistance, Kali is ready to go.

As for kills, Kali has Murderous Glee, which increases her Critical chance, and Catastrophe, a Severe damage Physical attack. The only thing missing is Physical Pleroma if you wanted to buff her damage a little bit more.

This will come as no surprise, but Odin is great in this fight. Heck, he’s great in most fights. His stats and Potentials are to die for, and he even blocks Dark as standard. He doesn’t have any Fire or Physical resistances, but these should be a priority investment on Odin as he is useful in practically every late-game fight.

The only other transfer Odin needs is Physical Pleroma, which will make his already impressive damage better. Odin even has native access to Critical Aura, letting him increase his damage further, and generate extra turns. Not to mention his unique skill, Gungnir, which takes chunks out of literally everything.

Odin is a Special Fusion, like Arioch, but he is well worth the investment.

Mada will need a tiny bit of work to click in this fight. Namely, a transferral of Physical resistance. Once you do, he is ready to go. Mada is a Jack-Of-All-Trades and a master of most.

The main draw to Mada is his access to Debilitate, Dekunda, and Mediarahan. Debilitate knocks all of Abdiel’s stats down a notch, Dekunda strips her of any buffs she may have, and Mediarahan is a very powerful AOE heal. When it comes to aggressive supports, Mada is a great choice.

Lakshmi is another support worth considering – mostly because she is one of the best supports in the game. This is down to her access to Luster Candy and Boon Boost. This combo increases all of your party’s stats by one notch for four turns, which is a noticeable boost in efficacy. She can also use Mediarahan for healing.

Lakshmi isn’t vulnerable to any of Abdiel’s attacks either, but consider transferring Fire and Physical resistance to keep her safe from AOE attacks. 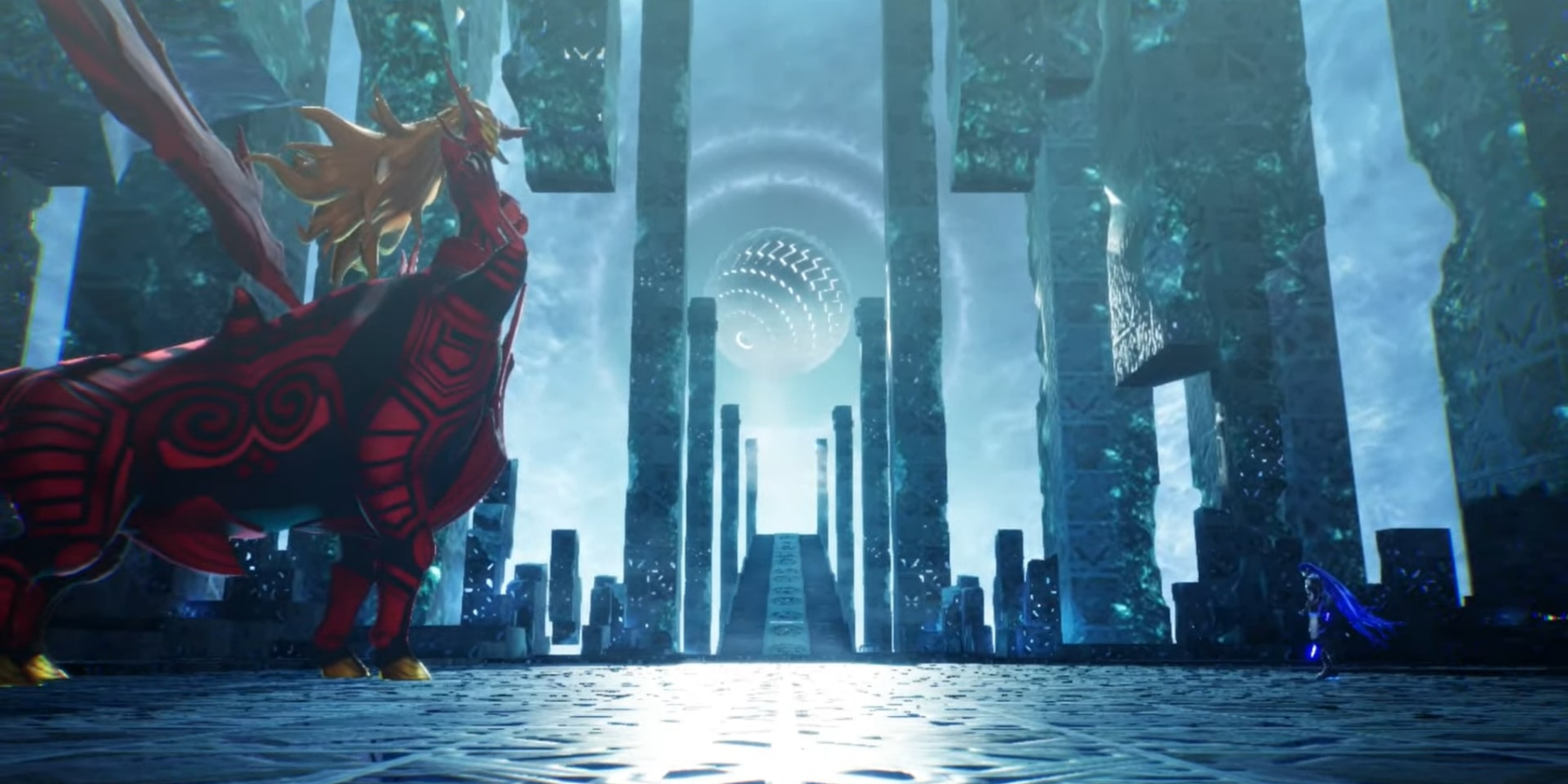 Nahobino should go into this fight with nothing less than full immunity to Fire and Physical. This won’t make him unkillable, but it will put him tantalizingly close to it. If you can put reflect Fire or Physical only him, this is even better. Rangda would be a good choice for Essence Fusion.

Attacks should be either Murakumo or Bufubarion based on build, but if you are going Bufubarion, try and get Donum Magi onto a support demon to buff up his damage further. If you are going Murakumo, then Murderous Glee and Almighty Pleroma will help a lot.

Because Abdiel has attacks that can pierce resistances, namely Purgatorium, Kannabi Veil is a fantastic defensive buff that will help to take the edge off her offensive.

It wouldn’t hurt to bring Physical, Dark, and Fire Dampers into this fight – especially if you have demons who aren’t blocking that element in your party. This is more of an RNG throwout than anything, but tossing a damper each turn could catch a wayward Agibarion or Mudobarion and put a downer on Abdiel’s turn.

Amrita Showers are a must-have for this fight as Confusion will ravage your party at regular intervals. 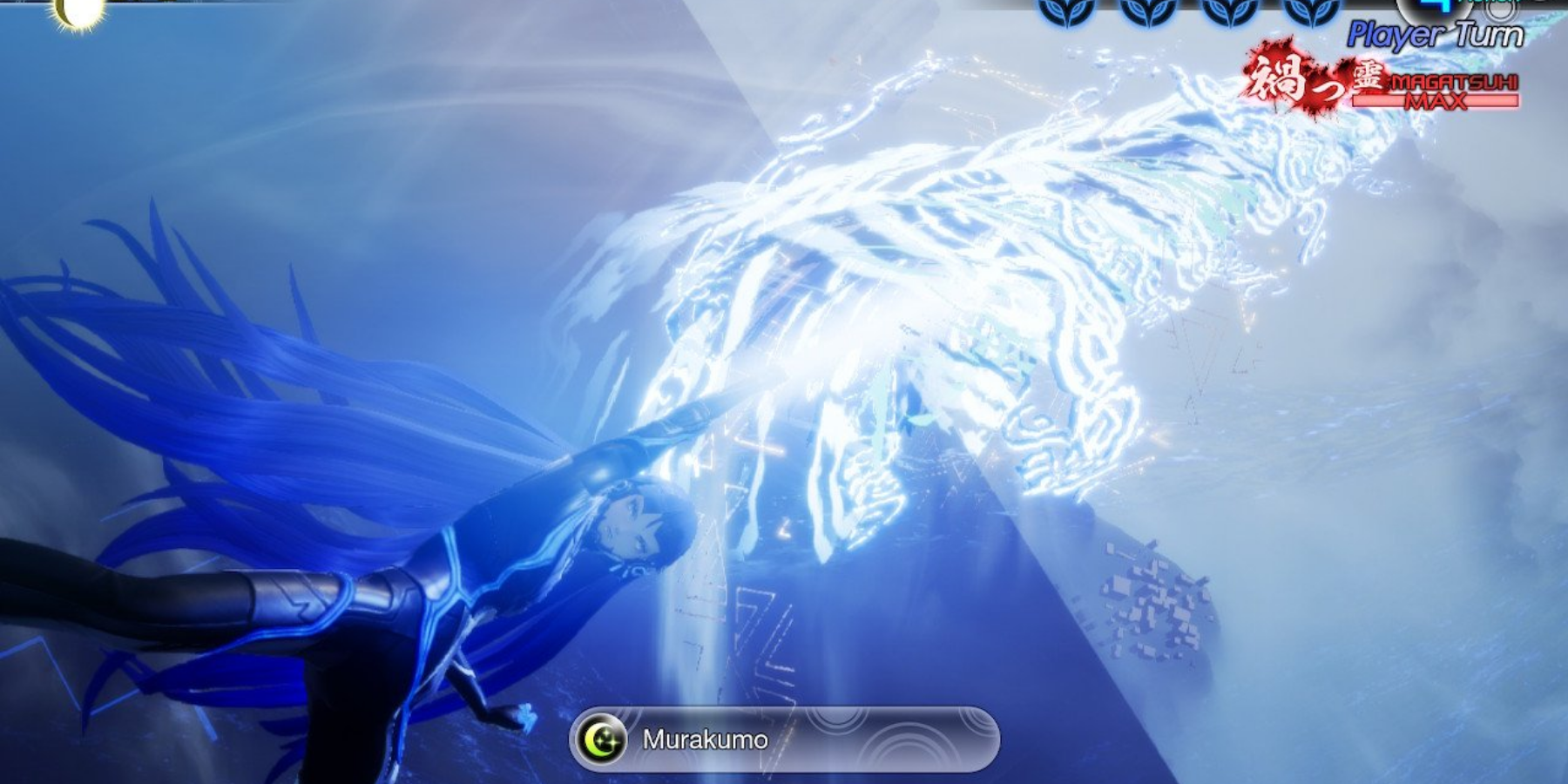 Abdiel is a tricky fight – but as with every fight so far, preparation helps take the edge off of it all. That being said, focus on keeping your party buffed, Abdiel debuffed, and lay into her with everything you have.

Once she has dropped to half health, change gears and focus on killing the Depraved Wing, and then Depraved Arm. Remember to keep your party healed, as Abdiel will start to cast Purgatorium.

Once both Depraved are down, refocus Abdiel and burn her as quickly as possible. Based on your party, Impetus could be a pain to deal with. If you kill her fast enough, however, she won’t get many – if any – opportunities to use it.

Once Abdiel is down, you are one step closer to reaching the Throne Of Creation.