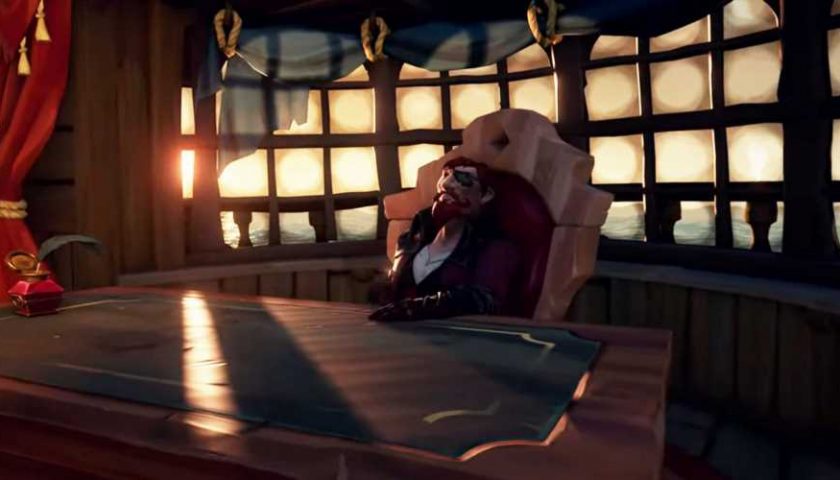 Ever since Rare switched to seasonal updates for Sea Of Thieves they've been adding loads of new content along with quality of life updates that many players have been begging for. Last season saw the inclusion of the Siren Shrines and Treasuries, which gave pirates the chance to swim beneath the ocean and venture into underwater caves filled with coral loot.

Today, Rare dropped a trailer for Sea Of Thieves' upcoming fifth season on their official Youtube channel. While it doesn't seem like we'll be getting anything as substantial as the Shrines, the game will be receiving one crucial feature that everyone has wanted since day one: the ability to sit down.

Yes, pirates will finally be able to take a load off and give their feet – or peg legs – a rest. The new trailer shows that players will be able to sit on chairs including the captain's chair aboard a galleon.

This is obviously a massive step forward for the game as being able to sit is a feature that every game should have at this point. After all, even video game characters need a break from time to time. Rare even went one step further and put in the option to lie down in a bed and take a nap, which will have the added benefit of recovering your health.

On top of that game-changing feature, Season Five will also include the ability to bury your treasure like a real pirate. You'll be able to take any piece of loot and use your shovel to bury it under the sand on an island. Doing so will create a treasure map that will show the location of where the treasure is buried. This can be used to hide treasure from rival crews or to pin the map to the new quest board that can be found at seaposts and outposts for other crews to find. If other pirates take your map from the quest board and dig up your loot, you'll receive renown and reputation the next time you log in.

Other new features include flares and fireworks that can be fired out of your ship's cannons, the ability to turn your speaking trumpet around to whisper to crewmates, ammo pouches that enemies will drop, and rowboats that have cannons on them.

As with the other seasons, there will be a load of new cosmetic items for both the free and paid Plunder Passes and the Pirate's Emporium, which will include some holiday-themed costumes and emotes. There will also be a costume set that will make your pirate look like Captain Barbossa as that Pirates Of The Caribbean collaboration doesn't seem to be ending any time soon. Oh, and there are three new shanties, which might make this the best season yet.

All of this new content will be arriving on the shores of Sea Of Thieves in just a few days on December 2nd. So get excited to do some sitting by the sea.