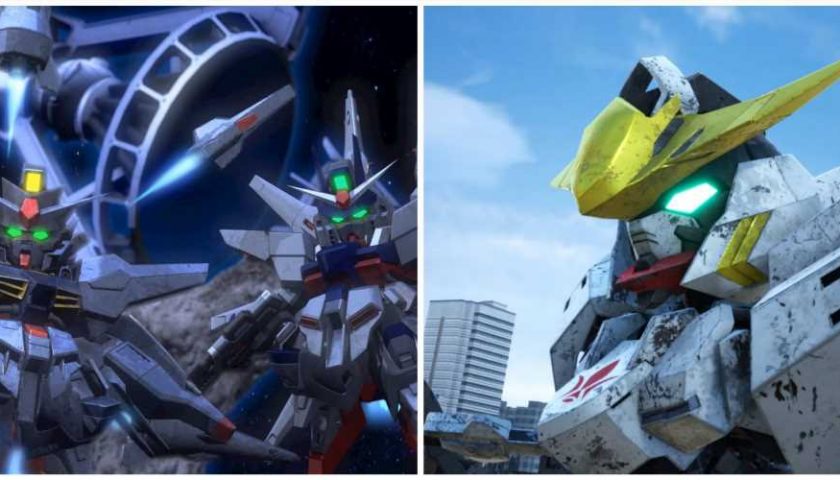 SD Gundam Battle Alliance is an excellent game for fans of the long-running Gundam series as well as newcomers looking to experience accessible mecha action alike, offering an exciting campaign based on memorable scenes from the entire series, with a basic but enjoyable gameplay loop that allows for plenty of stylish mecha combat.

Although SD Gundam Battle Alliance is relatively easy to learn, there are a few pieces of essential information that the game doesn’t tell you when you’re just starting out. If you’re looking to get the most out of your Gundam excursions, here are five essential tips to improve your experience. 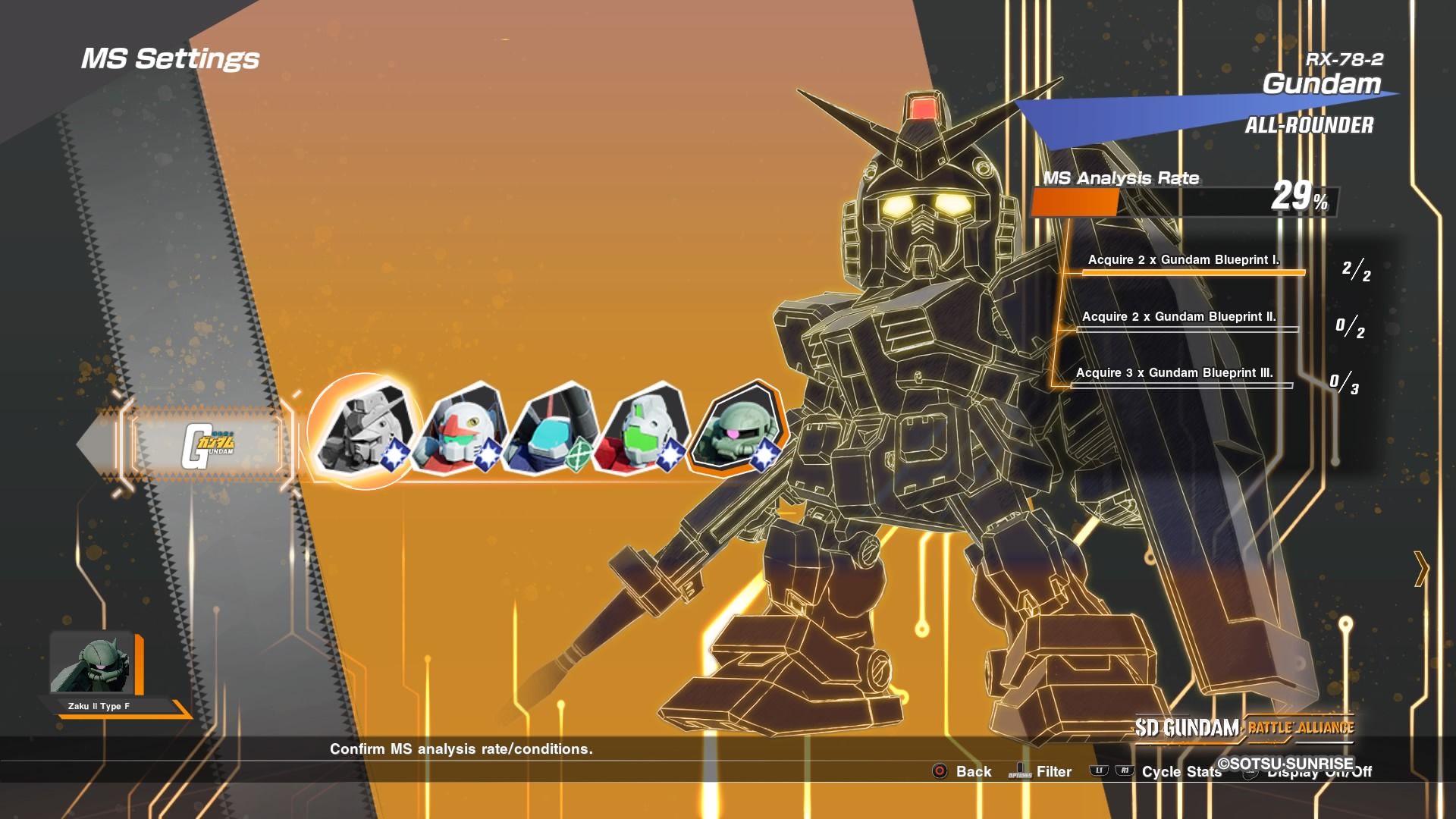 After playing through a few missions and unlocking a few Mobile Suits, you may be curious about how to unlock certain flagship Gundams from the series. Mobile Suits are unlocked by obtaining blueprints. Blueprints are often received after completing Break Missions and True Missions, which in turn will typically unlock new Gundams and Mobile Suits without you needing to do anything else.

To obtain certain Gundams and Mobile suits, however, you’ll need to replay missions and take down specific targets, or play the Chaos Missions associated with the same stage to be in with the chance of obtaining the necessary blueprints. Pay attention to post-stage screens to see which blueprints have been obtained and what still needs to be obtained for certain Gundams to unlock.

Back Attacks And Counters Are Essential 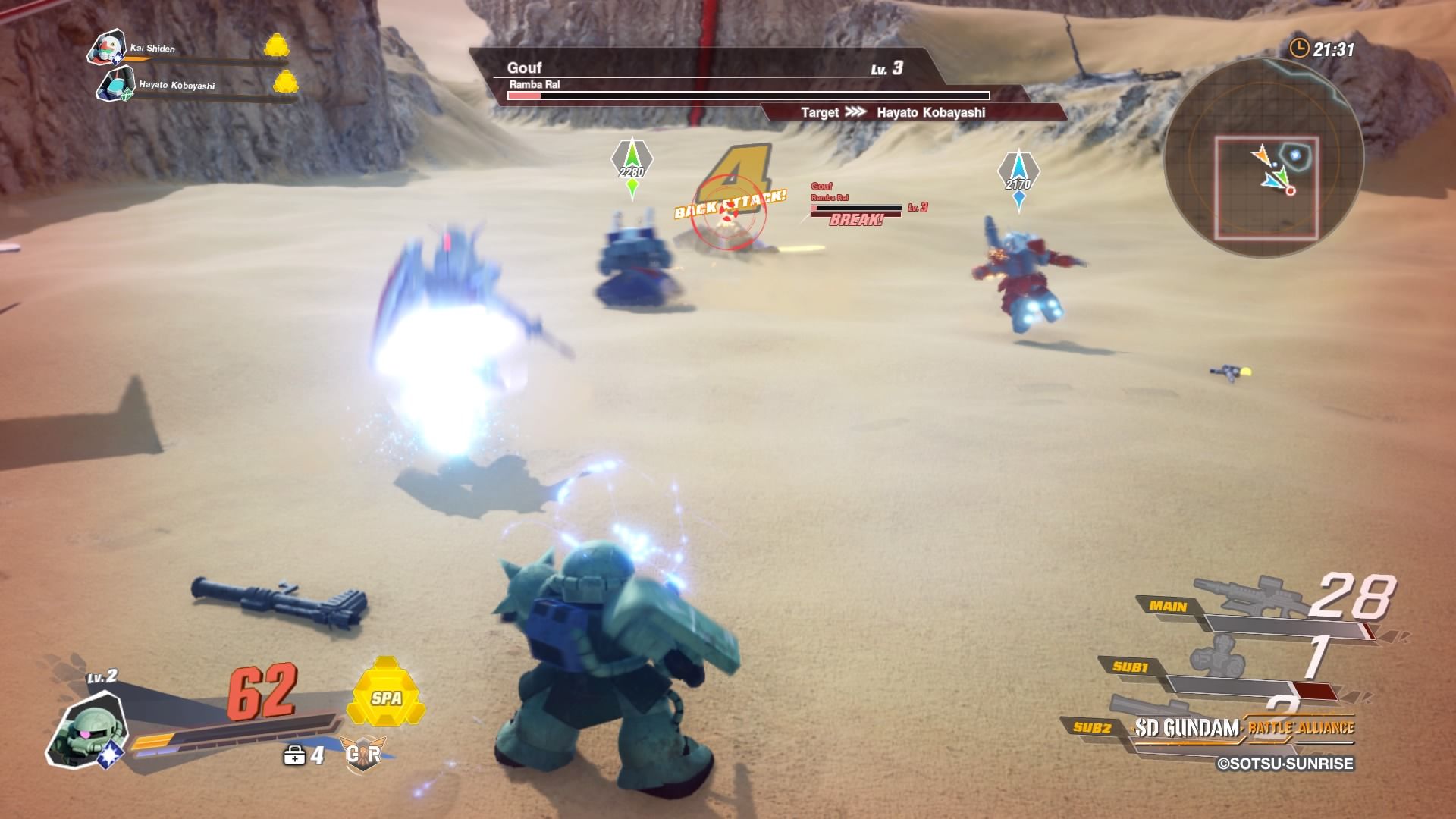 Although the tutorial at the opening of the game will teach you most things you need to know about the basics of combat, it won’t elaborate on two of the most effective ways to maximize your damage to enemies: Back Attacks and Counters.

Back Attacks are, simply put, any attack directed at the rear of an enemy target. The hitbox for back attacks is quite wide, and you can often get Back Attacks using one of your ranged weapons before certain enemies have even noticed you, especially when enemies are focused on a different target, such as one of your partners or a third party.

Counters are when you guard against an enemy attack with the right timing, which then offers you a generous window to follow up with a high-damage counter attack. Some enemy attack animations are more telegraphed than others, meaning the difficulty of the counter attack will vary between encounters, but generally speaking countering won't prove too challenging.

Both of these techniques will be essential to utilize in unison with your basic attacks in order to master combat. 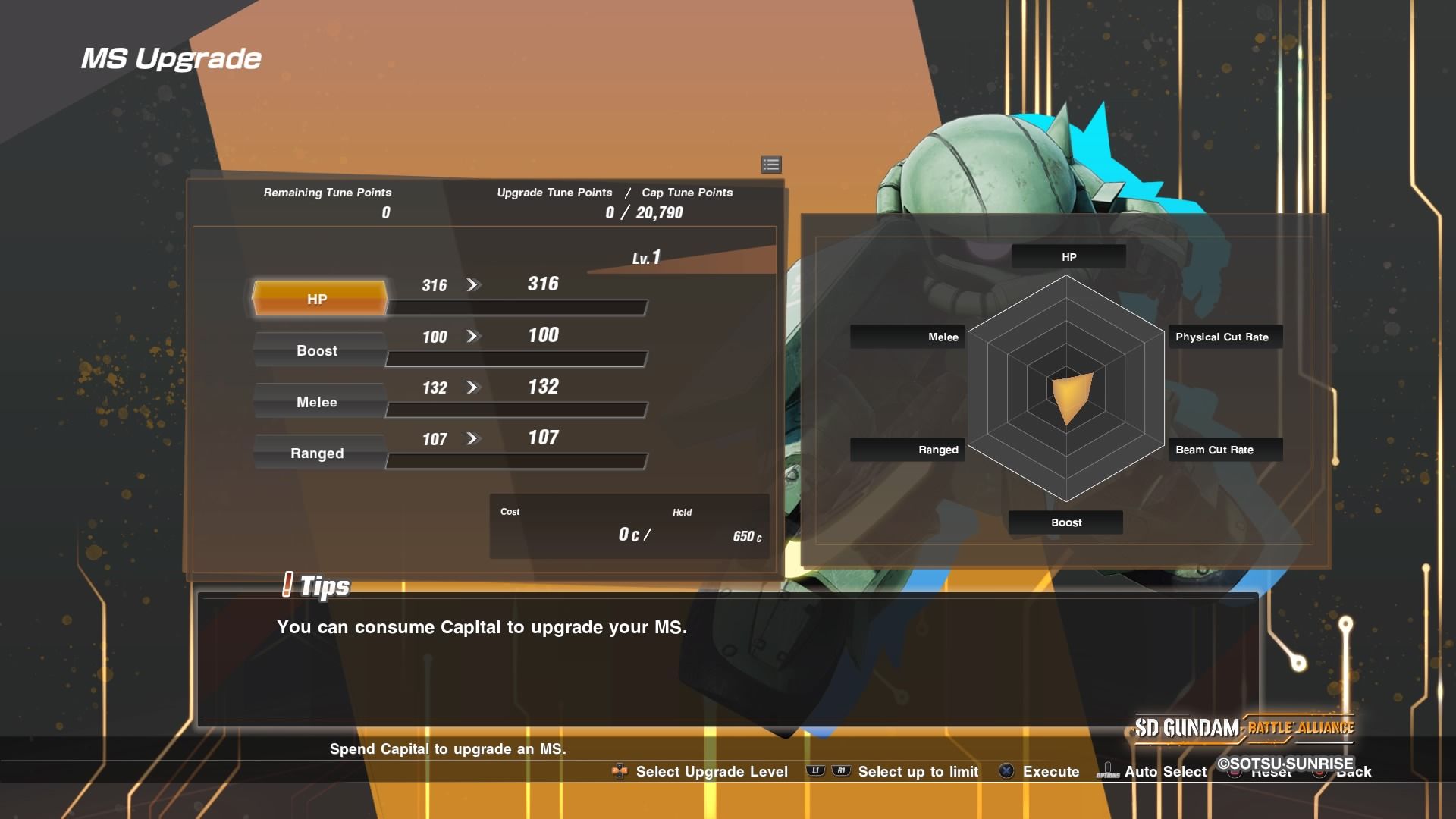 From the main menu, you can upgrade the Gundams/Mobile Suits you’ve already unlocked to increase their individual stats. The base stats of the Mobile Suit you are piloting will differ depending on if it’s an All Rounder, Sharpshooter or Infighter. Sharpshooters have a specialism in ranged attacks; Infighters have a specialism in melee, and All Rounders are a mix of both.

Depending on your preferred Gundam’s class, you should probably choose to develop the stats that are weaker by default. If you’re using an All-Rounder, however, it doesn’t matter as much, and you can generally invest in stats according to your preferred play style.

Upgrading your stats will cost Capital, the currency earned through play. The higher the stat increase, the more you’ll need to spend, and if you plan on trying out different units, it’s worth keeping in mind that every Mobile Suit will need to be upgraded separately in this way. For this reason, it makes sense to choose a favourite early on and stick with it for a while. 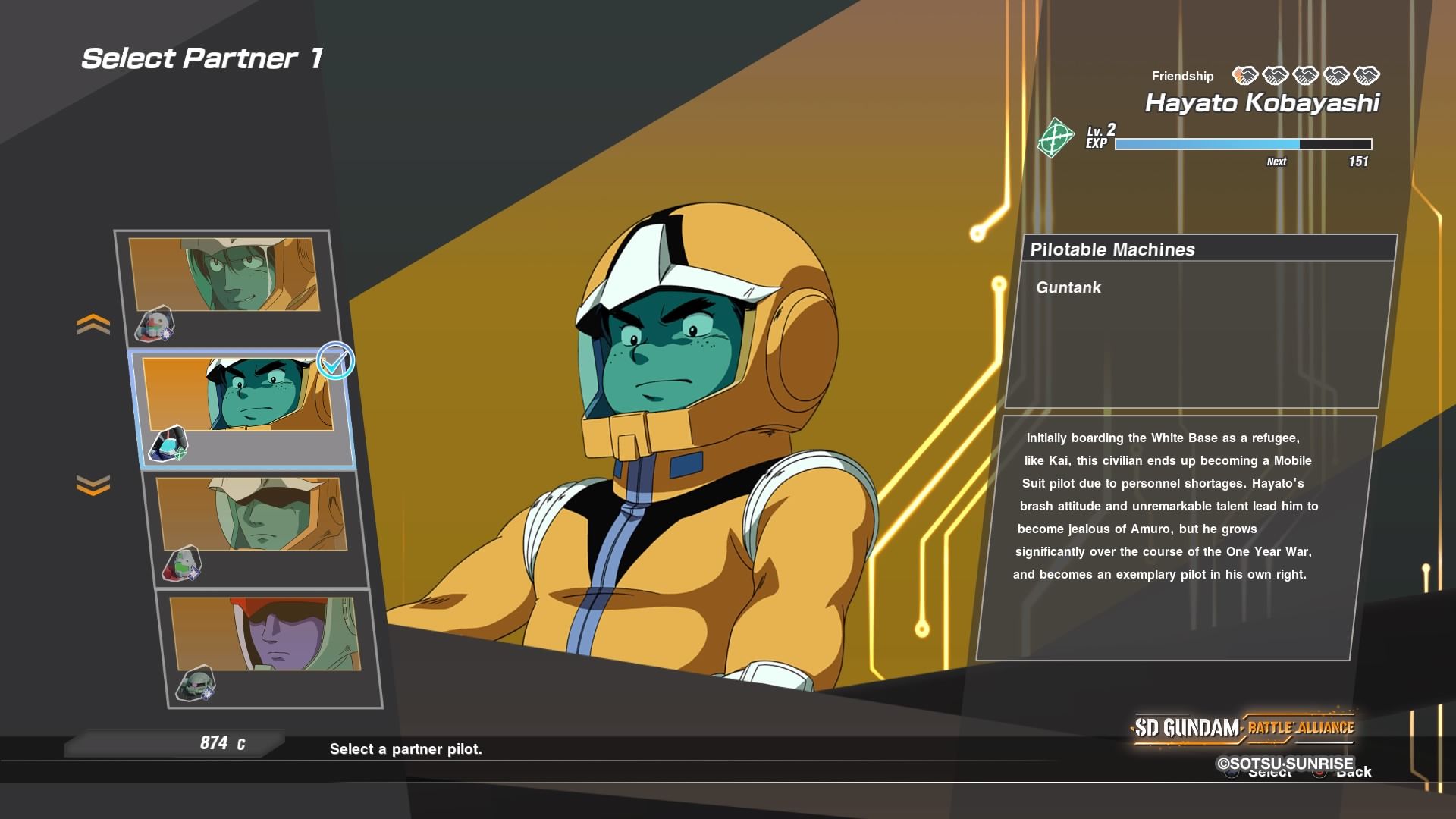 As you progress through the game, you’ll find parts that can be equipped to your Mobile Suit to give passive buffs. These are dispensed to you randomly at the end of each mission, and are associated with the different Mobile Suit Types (All Rounder, Sharpshooter and Infighter).

Up to three Skills can also be equipped to your Mobile Suit. These are unlocked based on your Mobile Suit’s level, which will increase by upgrading their stats (explained above). Skills offer both passive buffs and active additional abilities at higher levels.

Before you go into battle in a Break Mission or True Mission, you’ll also be able to select up to two partners and mobile suits. Depending on the combination of Gundam types, your ‘alliance effect’ will change, offering once again a range of buffs for your team. As you unlock more Gundams and pilots throughout the story, you can experiment with a range of different combinations and find effects that suit your play style the best. 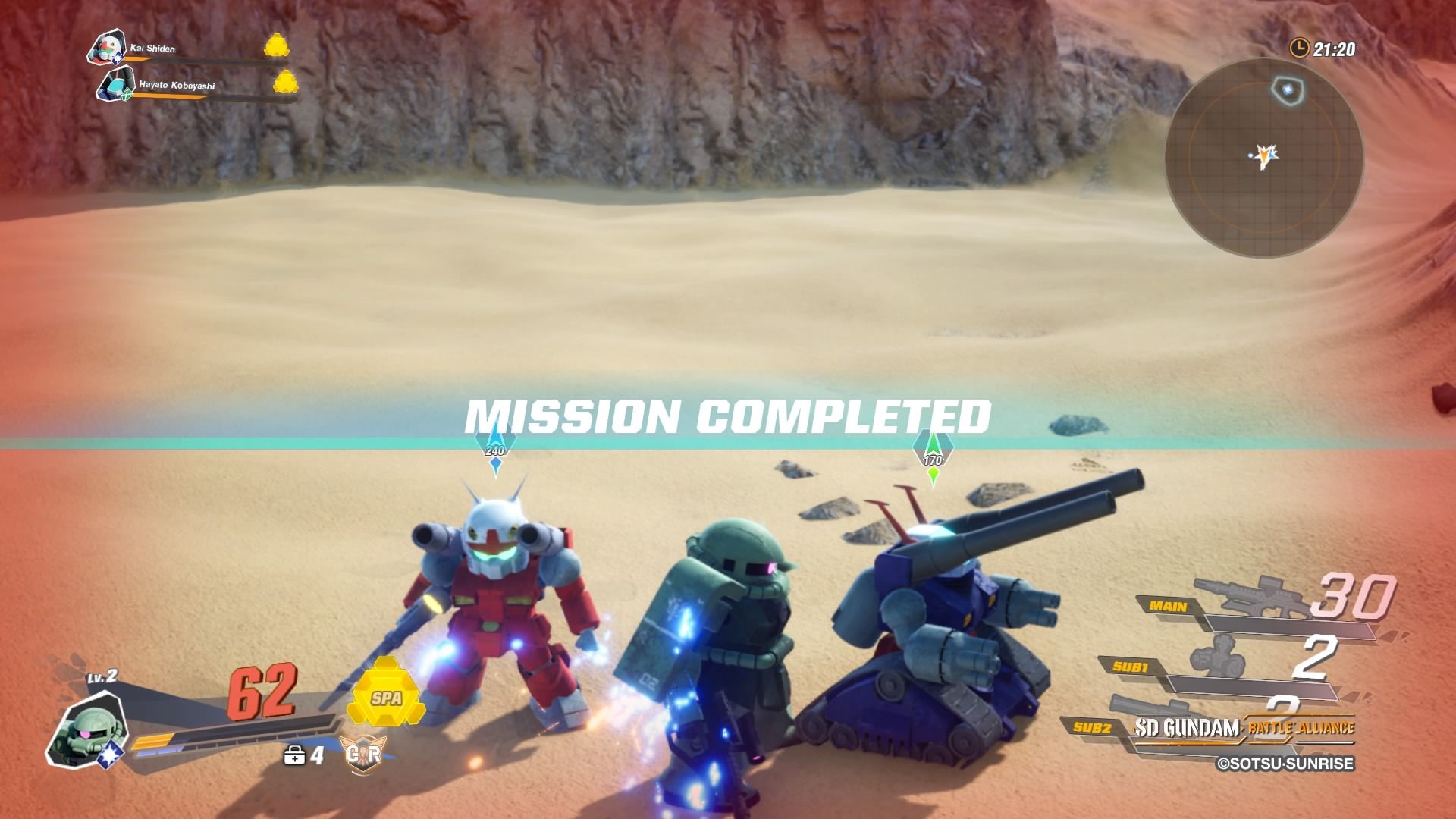 As you’ll notice when fighting high-HP bosses, SD Gundam Battle Alliance feels like a game made with co-operative play in mind. Although there are no options for local play, the game offers a suite of options for playing the main story in co-op with both friends and matched players.

This is useful as finding additional blueprints will take you plenty of grinding, and a team of human players will often get the job done quicker than if you were playing on your own with AI companions. Although the AI partners are certainly competent enough, you may have a much better experience with SD Gundam Battle Alliance if you play it with a pre-formed team.