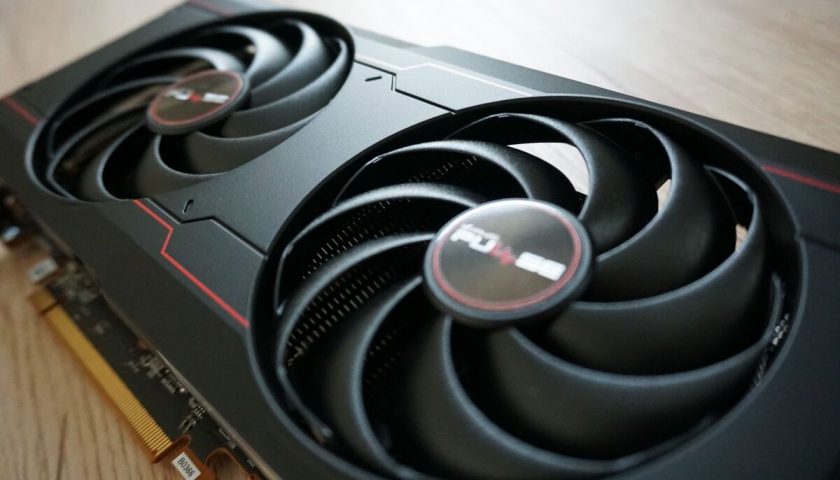 The Radeon RX 6600 XT graphics cards we’ve reviewed so far—the $550 Asus ROG Strix, and the $419 XFX Speedster Merc 308—represent the pinnacle of those manufacturers’ lineups, bristling with heavy-duty coolers and fancy extras like dual-BIOS switches and glittering lights. And yes, both designs impressed. But the $399 Sapphire Pulse Radeon RX 6600 XT takes the opposite tack, cutting out the fat to focus solely on delivering good performance and good cooling at a good price. (In theory, at least, since the crippling GPU shortage means graphics card prices skyrocket the second they hit store shelves.)

Don’t let that fool you, though. Even though the Sapphire Pulse lacks fanciful hardware luxuries, it manages to pull ahead of those pricier Radeon RX 6600 XT models in our benchmark tests—and it’s because of software. Sapphire has spent years honing its “Trixx Boost” feature, which marries slight image upsampling with AMD’s Radeon Image Sharpening technology to fantastic performance-boosting effect. Activating Trixx pours on extra frames, and to a large enough extent that the Pulse delivers solid 1440p gameplay in titles that can give other Radeon RX 6600 XT models some fits.

So yes, the hardware is only part of the story for the Sapphire Pulse Radeon RX 6600 XT. Let’s dig in.

Be sure to check out our original Radeon RX 6600 XT review for a deeper discussion around this GPU’s setup. It’s worth the time if you’re a chip nerd. AMD’s RDNA 2 architecture helps the Radeon RX 6600 XT sip power and hit sky-high clock speeds, but technical details about how this GPU’s Infinity Cache was implemented—and paired with a tiny memory bus—means it is better suited for ultra-fast 1080p gaming than stepping up to 1440p. (Sapphire’s Trixx Boost tech makes that less true for the Pulse, at least for today.)

For this review, we’ll just plop a chart below that shows how the Radeon RX 6600 XT’s key specifications stack up against last generation’s $279 Radeon RX 5600 XT and $400 Radeon RX 5700 XT. They’re apt comparisons, because while the new card might carry the 5600 XT’s lineage, it also comes in at the 5700 XT’s higher price tag.

In comparison, the Pulse doesn’t change up too much aside from one key spec: Clock speeds. Sapphire bumped the typical Game Clock up to 2,382MHz from the default 2,359MHz. That’s a modest increase, and behind the 2,428MHz we saw in the pricier 6600 XT models, but as you’ll see in our benchmarks, these all deliver essentially identical performance in their stock configurations. Plus, Sapphire needed to leave its step-up $450 Nitro+ offering some room to work.

Sapphire left all the fancy extra features to the Nitro+ as well. The Pulse RX 6600 XT sticks to a plain, black design with some red Pulse and Radeon branding, but nary an RGB LED, exchangeable fan, or dual-BIOS switch in sight. Don’t mistake plainness for ugliness, however, as the simple aesthetic should fit very well in most gaming PCs. An aluminum backplate atop the graphics card keeps things looking nice and clean, while the black plastic shroud includes some light texturing that helps it look more attractive.

While it’s not loaded down with heavy metal, the Pulse doesn’t skimp on the cooling front either. A standard-sized heatsink supports the GPU and other vital components, working in conjunction with Sapphire’s “hybrid fan design” that we first witnessed in the Nitro+ Radeon RX 6800 XT. The new hybrid fan blades merge characteristics from both axial and blower-style fans, improving both airflow and air pressure compared to yesteryear’s axial fans, while keeping noise levels low. The two fans on the Pulse each comes loaded with nine of the shallow, swooping blades, compared to twelve on the Nitro. Cut-outs in the backplate help air flow cleanly through the heatsink.

It’s straightforward but effective—a cornerstone for the Pulse series. Sapphire’s card manages to run almost inaudibly while keeping temperatures well tamed, with characteristics similar to the fantastic custom cooler on XFX’s rival Merc 308 Radeon RX 6600 XT. That’s especially impressive when you consider that the XFX sports a big, long cooler, and the Pulse measures in at just a hair over two slots thick. Good stuff.

And Sapphire’s own custom software solution adds so much more.