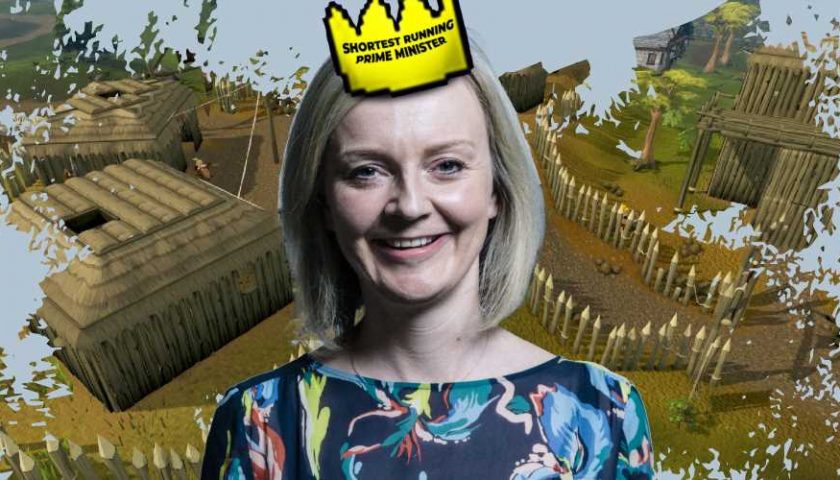 The non-Brits among you may have been confused by the news coming out of the country yesterday. Unfortunately, describing it to you is only going to make it worse. Prime Minister Liz Truss has stepped down after just 44 days on the job. She might also be replaced by Boris Johnson, the guy who they just kicked out of office. Normal country.

Since we mere peasants don't get a say in who our next overlord will be, all we can do is point and laugh. And that's pretty easy to do when you were in the job for a shorter amount of time than you campaigned to get the gig in the first place. So as you might expect, pretty much everyone has been lining up for a chance to dunk on Truss – including, strangely enough, everyone's childhood favourite MMO, RuneScape.

"Looking for a Fresh Start, Liz Truss?" tweeted the official account for Old School RuneScape, just moments after her resignation. "We've got a fresh economy, where you can really make a difference! This essential catering worker needs a helping hand during this cost of living crisis, he can't even afford his own ingredients!"

These not-so-subtle jabs are in reference to the catastrophic damage she inflicted upon the country during her few weeks in office. As soon as she announced tax cuts, the value of the pound plummeted. Couple that with little to nothing being done to prepare us for soaring energy bills this winter, and it's likely that many across the country can relate to the cooks across RuneScape.

The main RuneScape Twitter account took a dig at the outgoing PM too, sharing a picture of some lettuce sitting on a throne. This is a shout-out to an infamous livestream hosted by the Daily Star, which started a live feed of some store-bought lettuce last week, seeing if it would outlast Liz's premiership. And of course, it did. Some 60p lettuce had more resilience than our prime minister, and frankly, probably has some better policy ideas too. Or at the very least, it wouldn't give its mates fancy jobs at the expense of the country.

It remains to be seen if these dunks make it into the actual game, but here's hoping. With developer Jagex being based in the UK, it's not surprising that many of the workers are eager to get in on the fun. What else are we meant to do while the country goes to shit? It's not like we even get a say in it. Hell, RuneScape actually lets you vote on proposed updates, officially making it more democratic than the United Kingdom. I hate it here. This is a cry for help.