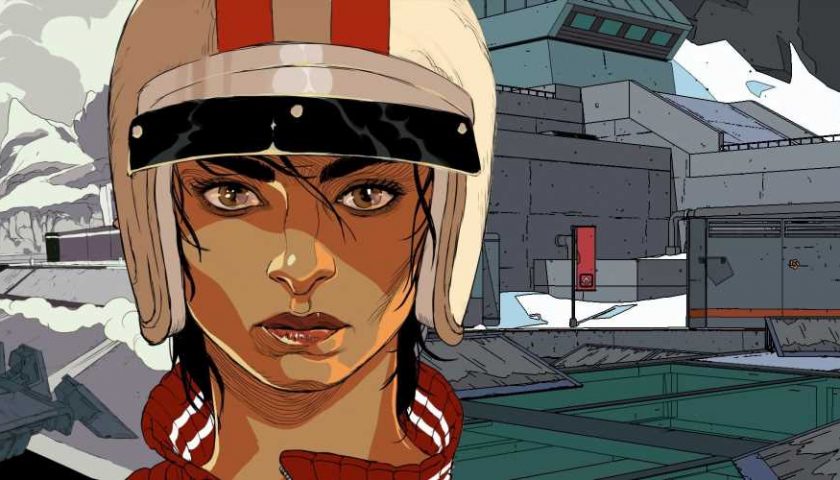 Rollerdrome's Zugspitze Station may just be one of the most challenging stages featured in Rollerdrome. With Stompers seemingly coming out of nowhere, and a steady stream of Polybeams, Snipers, and Warheads dotting the perimeter of the stage, things can get pretty dang hectic. However, if you are feeling a little hollowed out after having beaten the time trial challenge from the Green Bay Mall level, we are happy to inform you that these challenges are a little less "intense".

However, while the Zugspitze Station challenges may not have you tearing your hair out trying to shave seconds off of your finish time, they can still present a healthy challenge. If you don't know how to take advantage of the arena, stringing together the complete combo may be a particularly stiff challenge. But worry not, we are here to guide you through all of it. 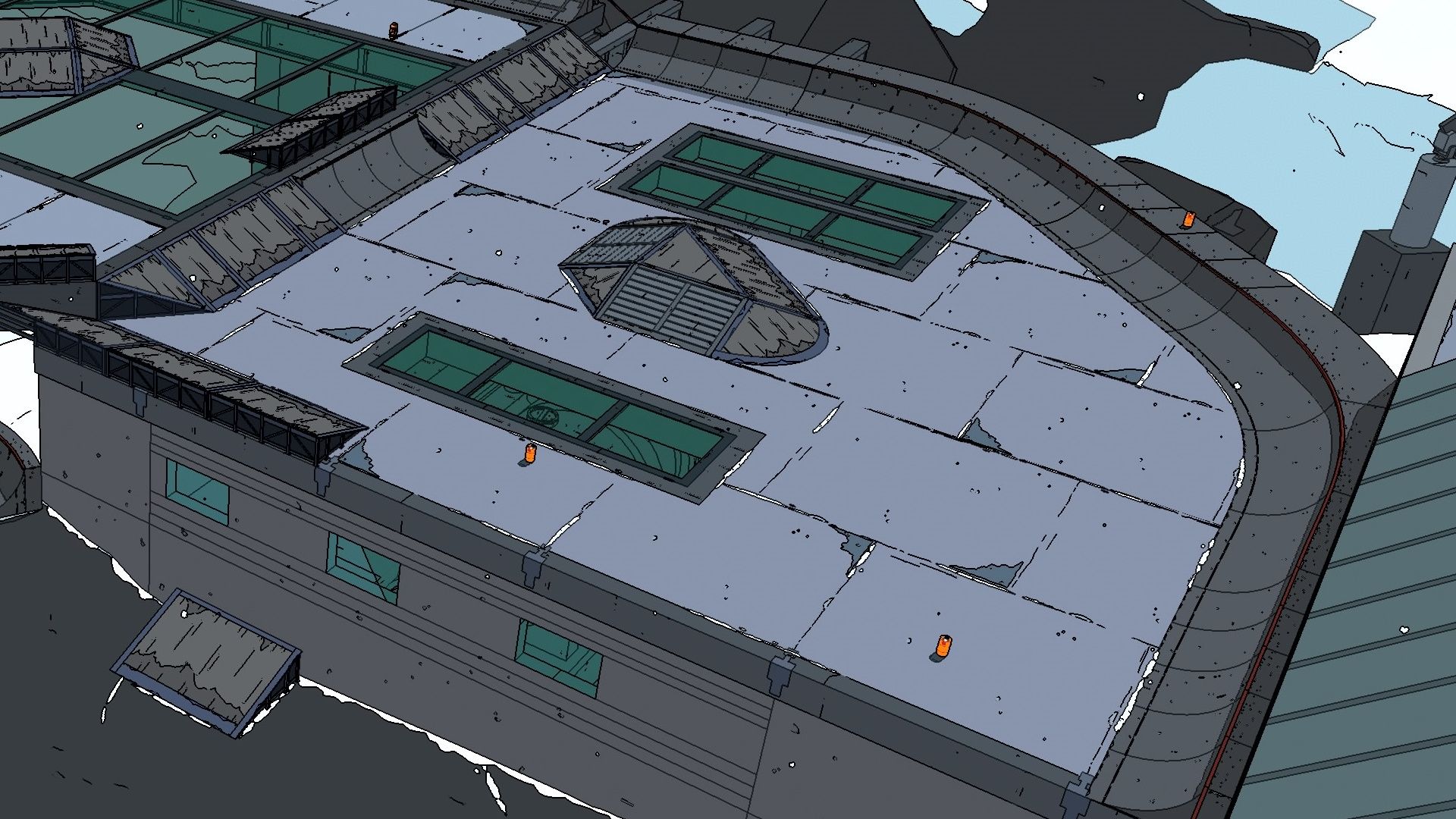 Zugspitze Station is Rollerdrome's final wintery stage. As far as score-attack style stages go, this is easily one of the most enjoyable in the game. The layout features three separate areas; all of them have ramps lining their perimeter. As you can see from the enemy info above, you will be fighting every enemy the game has to throw at you. However, it is worth noting that you will almost always have a clear shot at them with the Z-11. 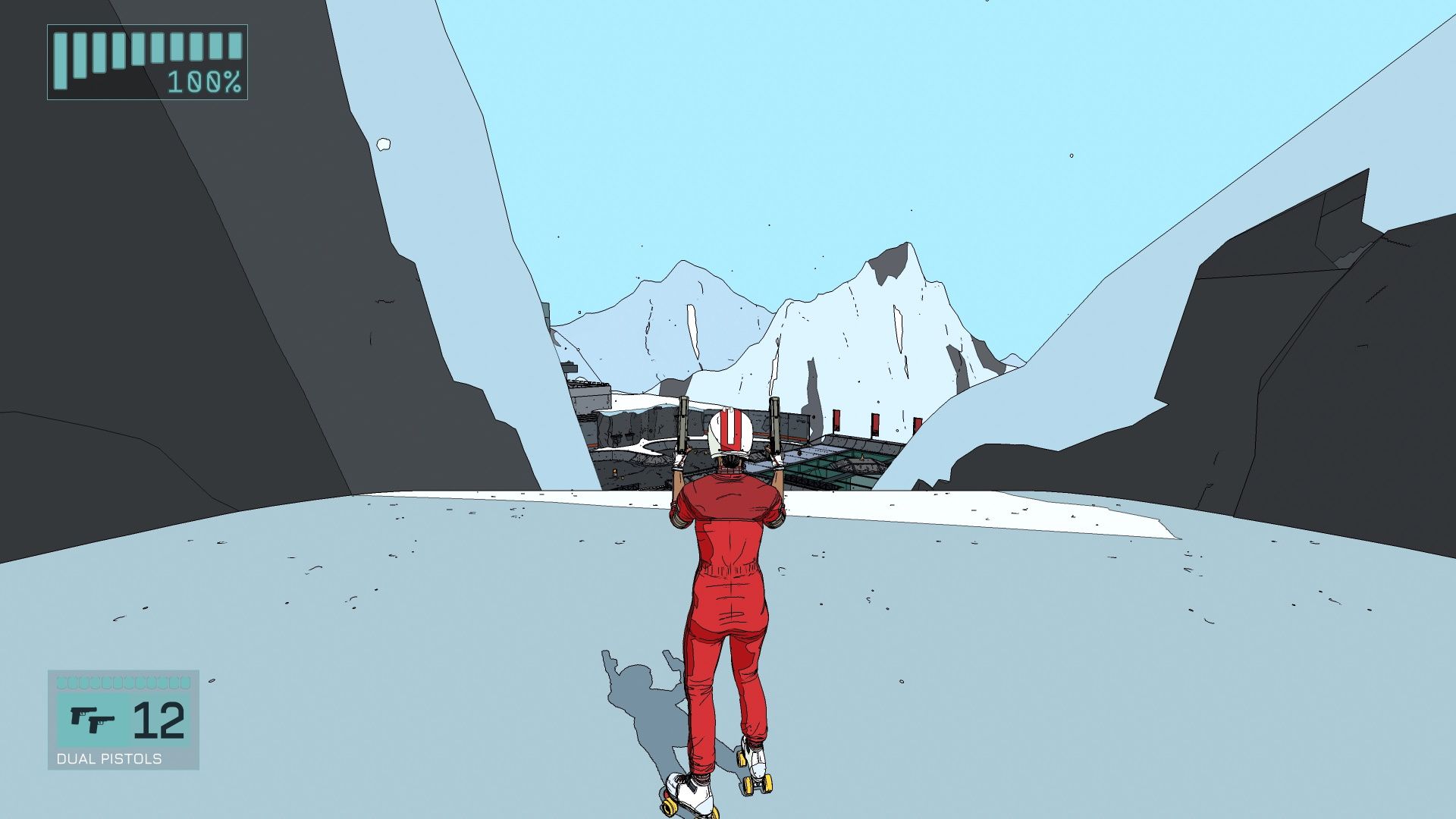 Most of the Zugspitze Station challenges offer an opportunity to approach the stage in different ways. A few of them seem to be here to reinforce the use of your Super Reflex Time, but the others are just a reason to get creative and have a little fun. 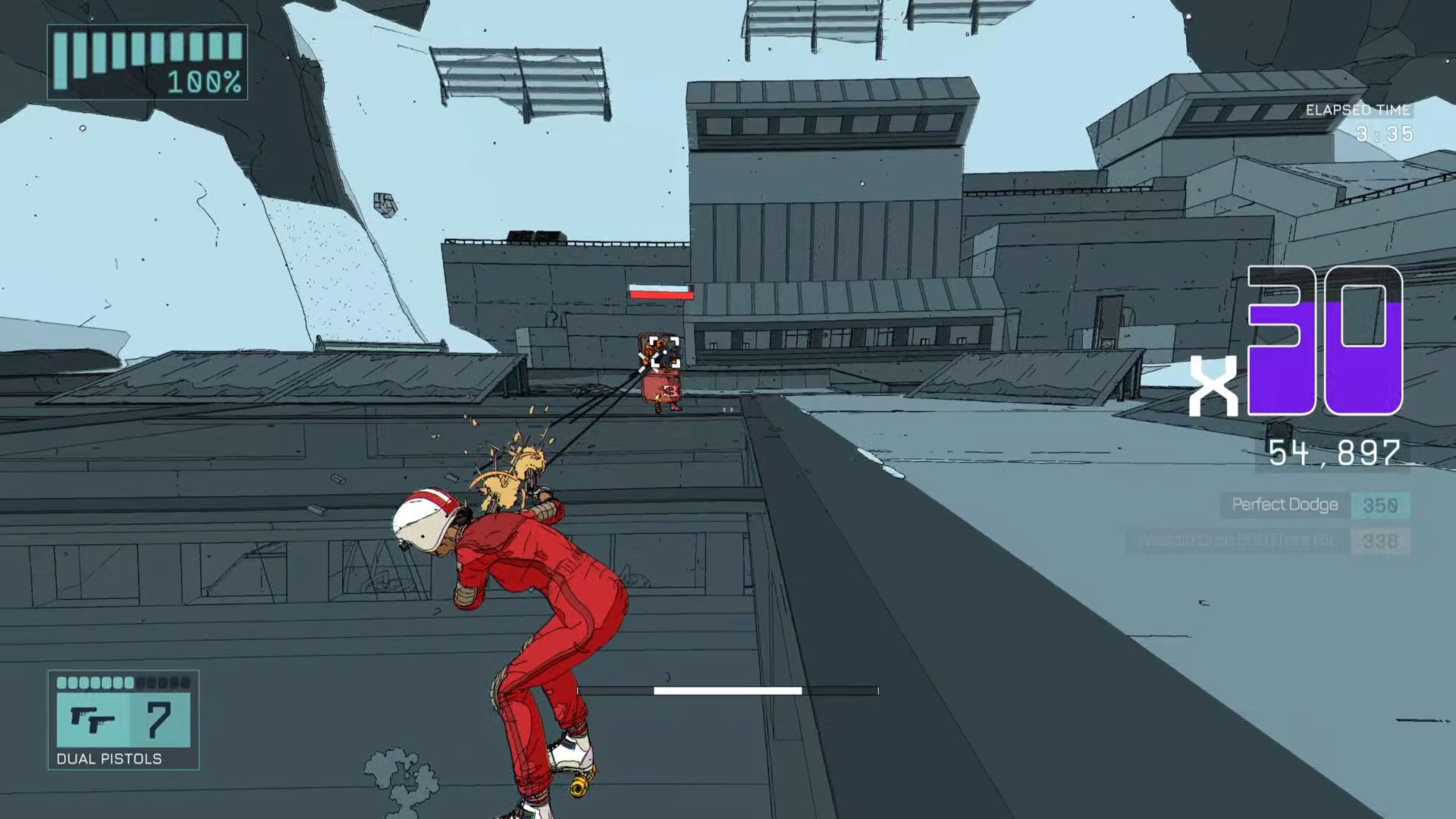 The return of the gimme! Honestly, we think this challenge has to exist to just make damn sure that everyone knows how to use Super Reflex Time at this point in the game. Though we question how you could get this far without readily using this core mechanic. However, just for the sake of being thorough… You enter Super Reflex Time by dodging an attack at the last minute (performing a "Super Dodge) and then using your Reflex Time.

This is another pretty easy one. They seem to REALLY want you to have Super Reflex Time down going into the final two stages. Just skate up to a Riot Guard, dodge their slam at the last second, enter Reflex Time (which if you got the dodge right, will be Super Reflex Time), and hit them with a Slug Shot. Done and dusted!

Stagger a STOMPER, causing them to Stomp prematurely 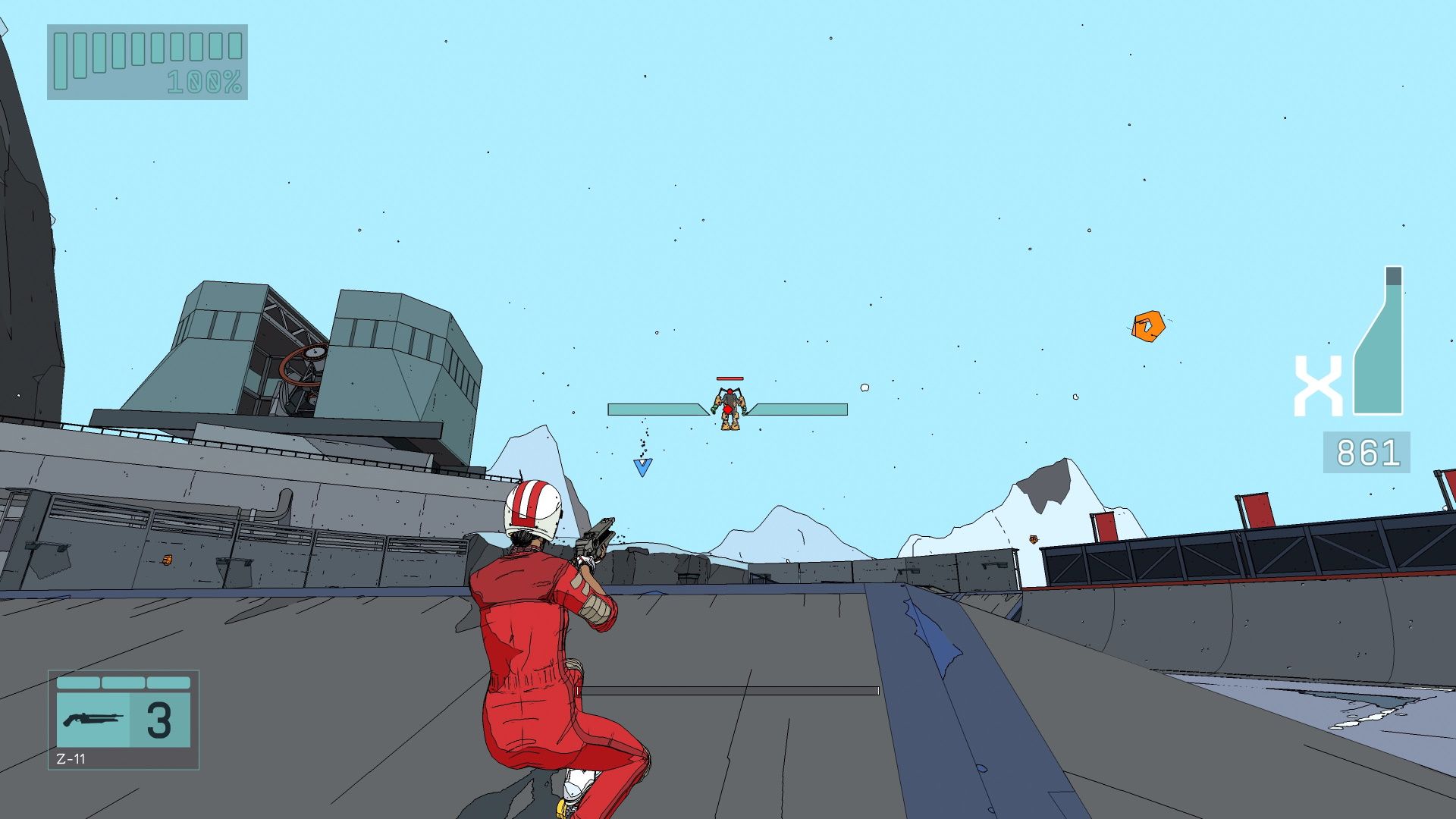 You can accomplish this challenge within the first few seconds of entering the stage. There will be a stomper hovering high above the center of the stage right as you enter it. So, enter into Focus Time, fully charge your Z-11 (that's your Sniper Rifle equivalent), and blast the Stomper in the chest. This will stun them, causing the premature Stomp. Quest complete!

You want to stun them, not kill them. So, this is one of the few times when you shouldn't enter Super Reflex Time.

Finish without using the Grenade Launcher 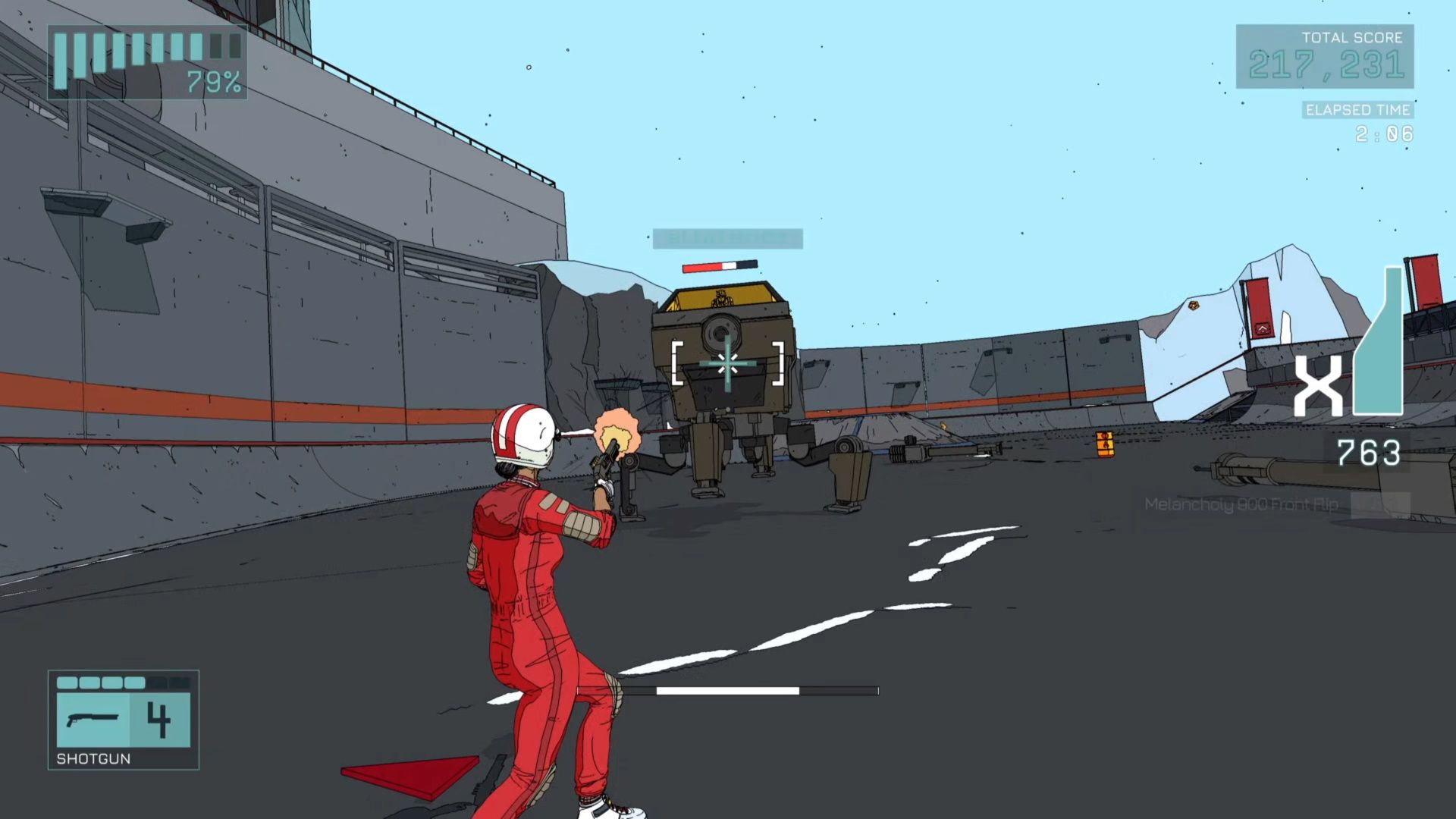 Well, at least they didn't take the Z-11 away from you. That would have been brutal. The only thing you really desperately need the Grenade Launcher for here is to take out the Mecha Bruts. There are three of them. However, while the Grenade Launcher is the best way to take them out, the Shotgun or Z-11 will do the trick as well.

Perform a Backbreaker Flip by the Trick Token 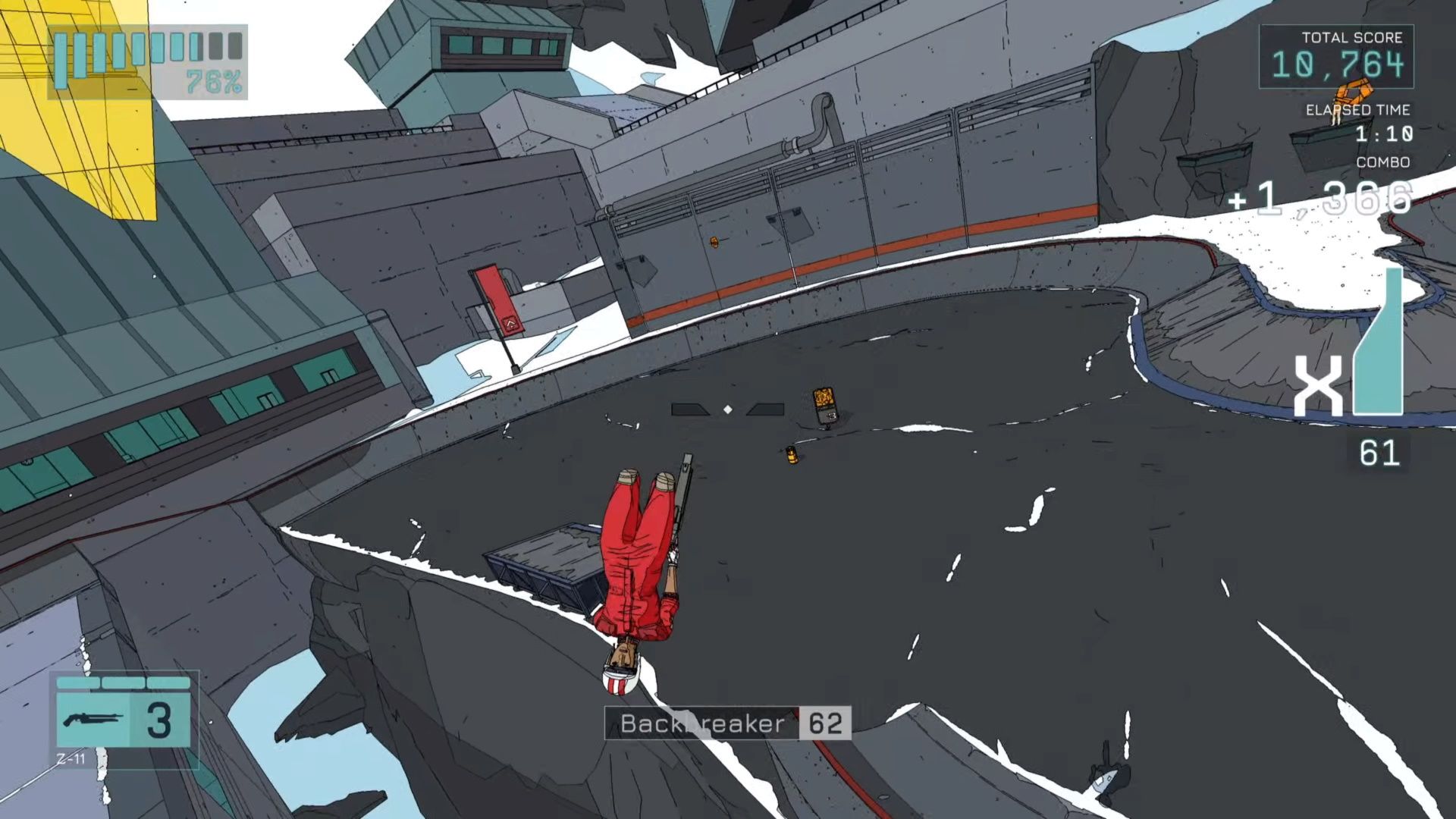 The Trick Token is hovering in the middle of the stage. But the ramp that leads directly to it is actually located on the corner of the section of Zugspitze Station that you start in. So, just launch yourself off that ramp, press down, up, and the grab button (while also holding the spin button) and you will crush this challenge in no time.

Eliminate a House Player whilst performing a Floor Sweeper Grind 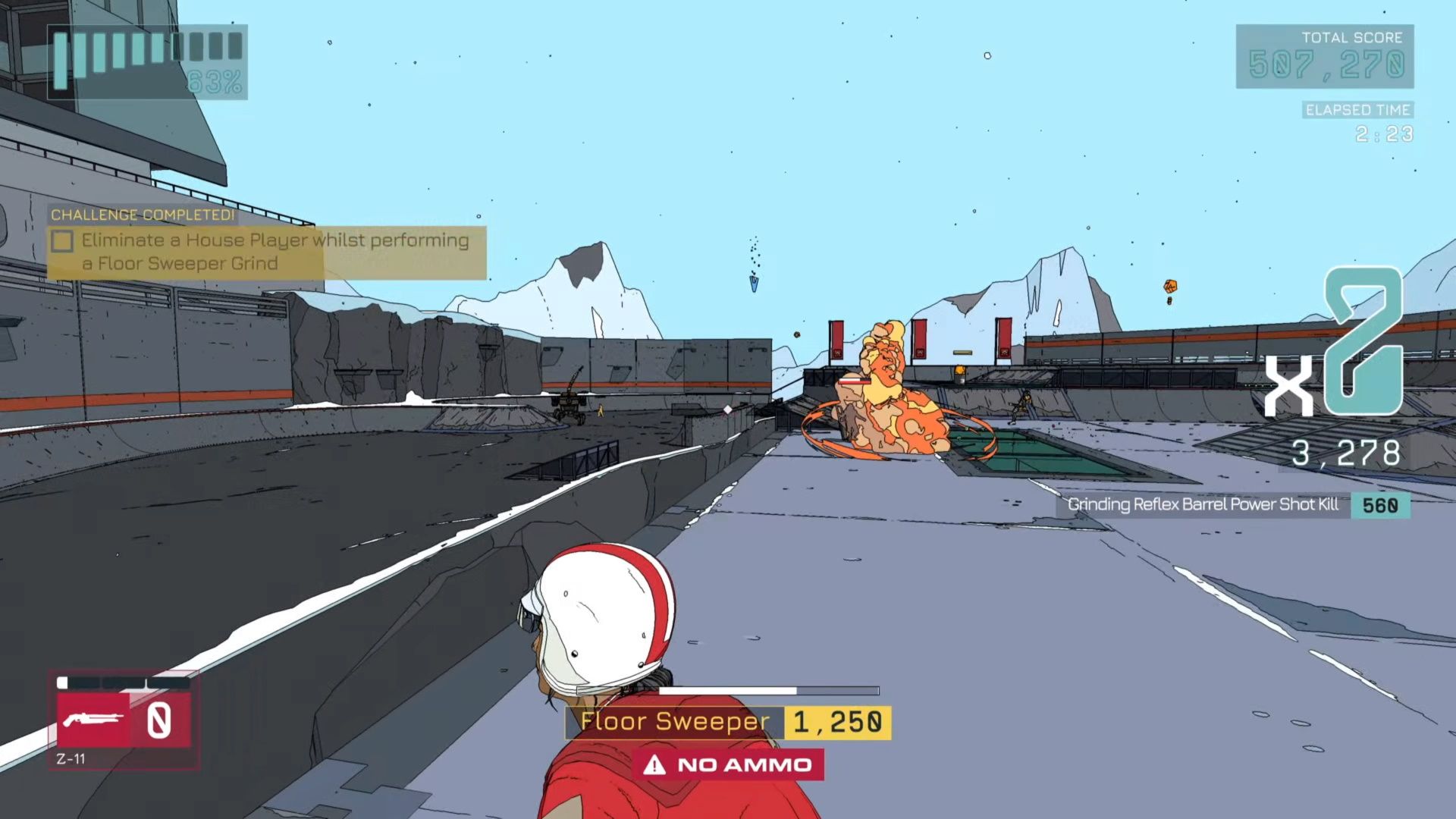 There is a single rail that wraps around nearly the entire stage. You have a powerful gun that can hit an enemy as far away as you can see them. Better yet, there are explosive barrels all around you, and enemies are standing near them. This challenge is cake, my friend. Just press up, down, and the grind button and blast someone as you casually grind your way around the stage.

Where To Find All 5 Combo Tokens 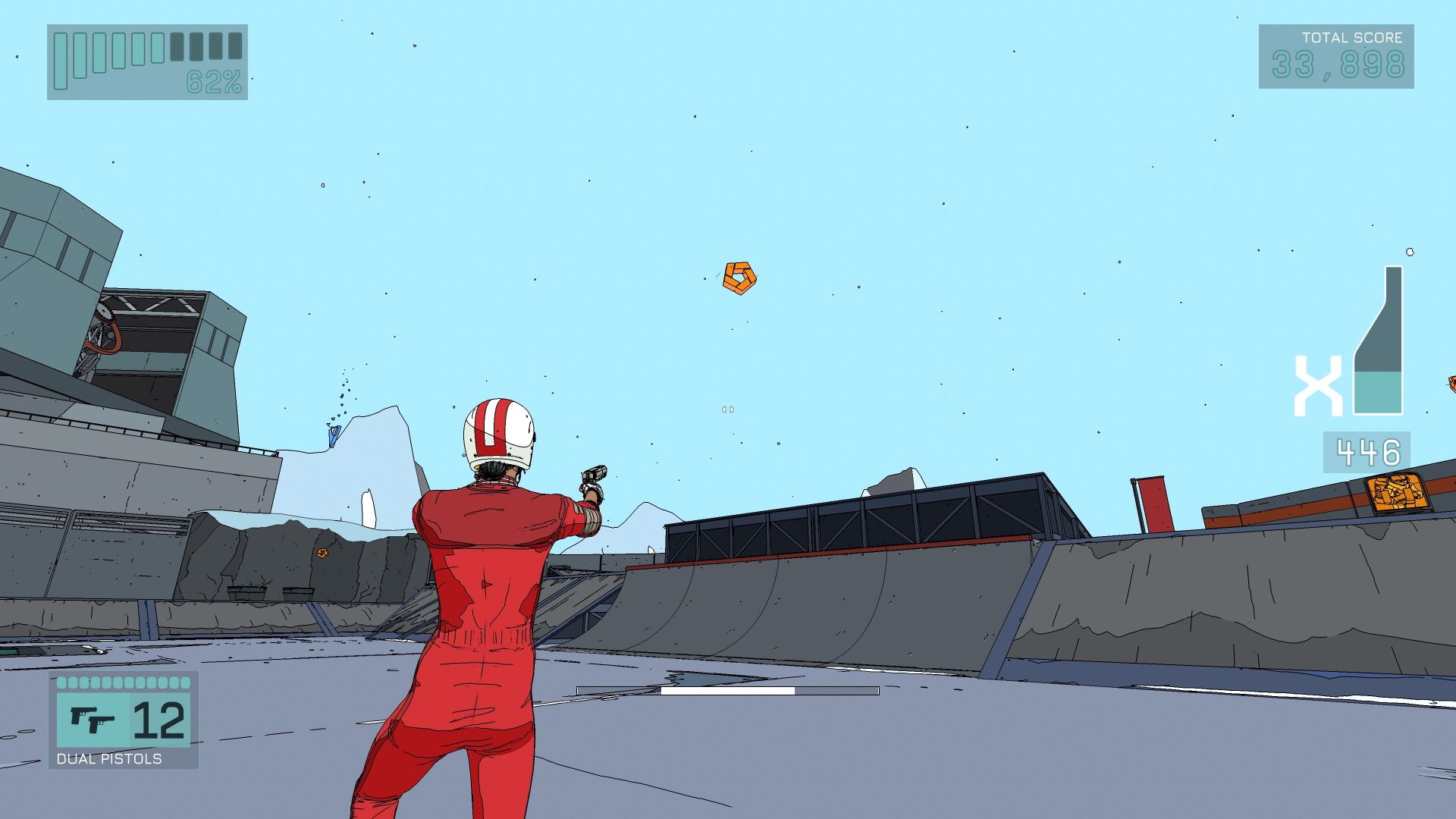 While Zugspitze Station is a super enjoyable level in general, it cannot claim to have the most inventive Combo Token placement. Yes, unfortunately, after having just played through some levels that went the extra mile with their Combo Token placement, we are back to the Combo Tokens just dotting the perimeter of the map. 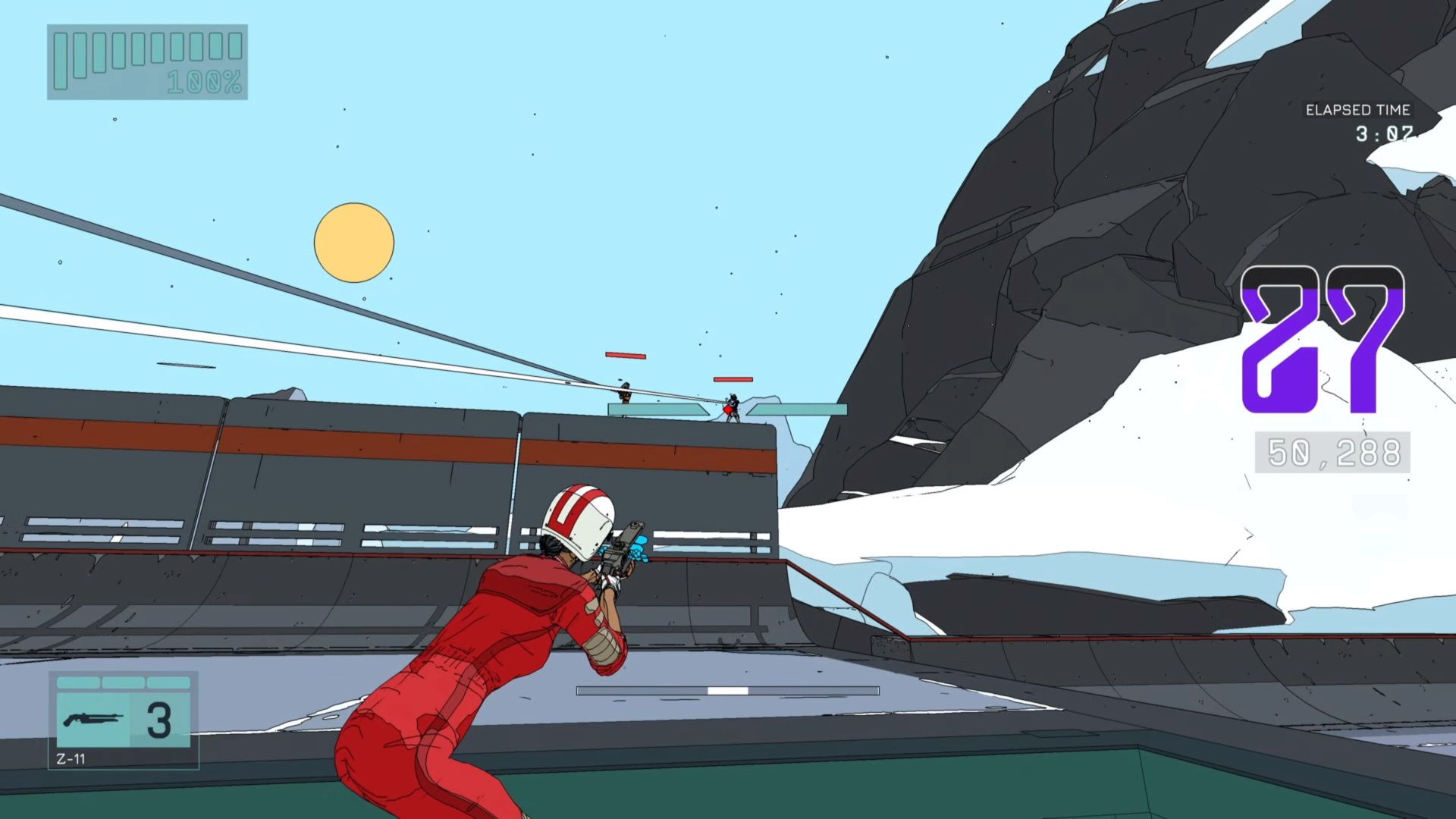 If Zugspitze Station has one thing going for it more than anything else, it is how fun it is to chase the high score in this stage. Since we think the two aspects are, essentially, intrinsically linked, we are going to first tell you how to combo all the House Player kills together, and then we are going to give advice on how to optimize that single combo run for a higher score.

Finish the run in a single Combo 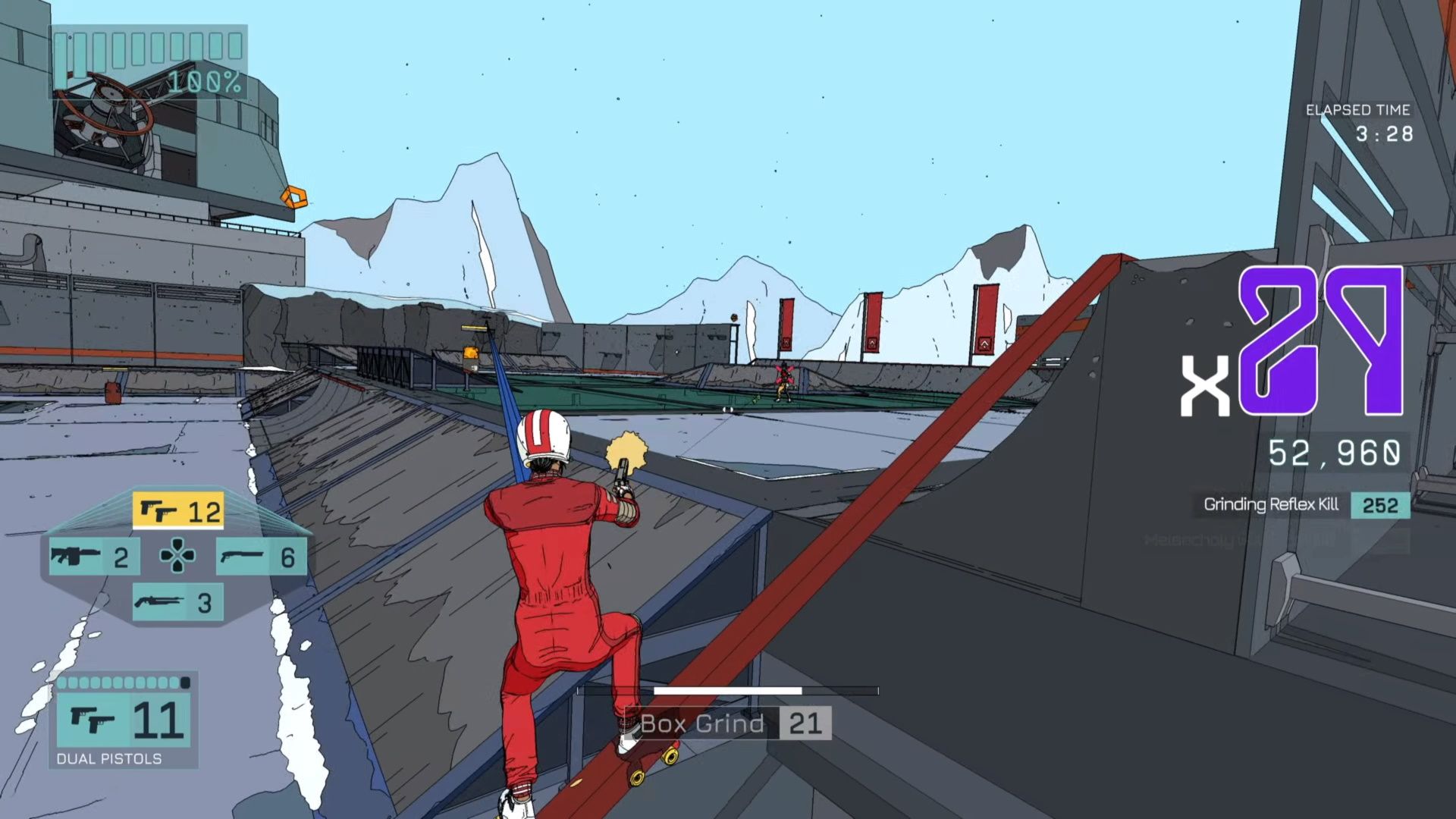 Good news, Zugspitze Station has a rail that carries you across all the sections of the map. This means that, yes, you will be able to easily preserve your score if you have scored a kill and are on the other end of the map from where the enemies are. Especially since the Z-11 allows you to shoot across the length of the entire map! This makes your life a lot easier, as it means that you don't have to focus so heavily on forming a coherent route. 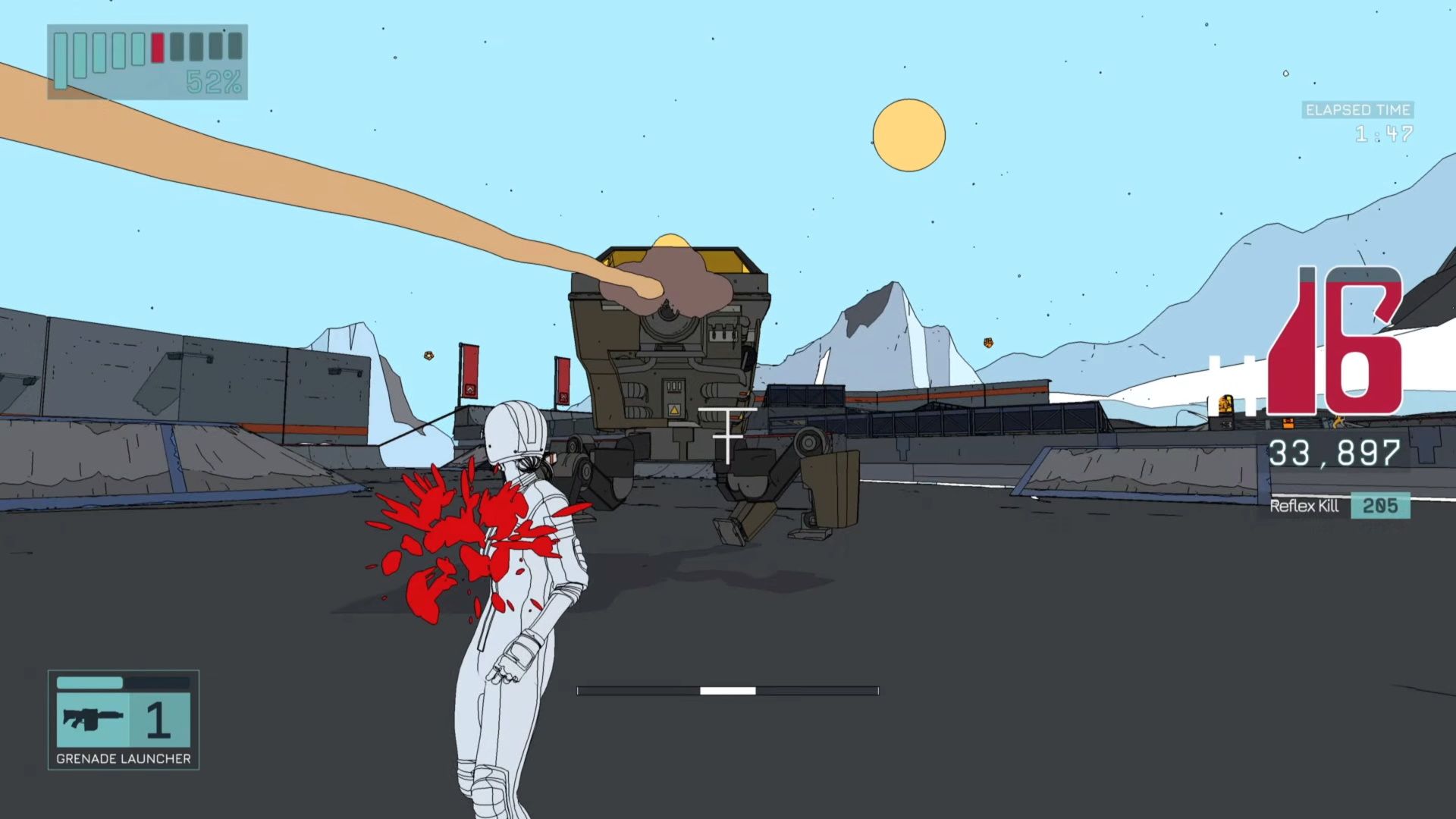 So, the priority here is all about threat management. Stompers will ruin your run, so you need to take them out the second they appear. The stage starts with a Stomper hovering above the center of the stage: the first enemy you kill should be that Stomper. Beyond the Stompers, take out the Mecha Bruts when they show up. Thankfully, there aren't that many of either type.

As for Riot Guards, on most stages we like to keep a healthy amount of them hanging around, as their landmines are excellent Super Dodge bait, but here those landmines will often interrupt the rail, which can be a huge problem. Also, there are lots of Snipers and Polybeams to help you kickstart that Super Dodge and get you into Super Reflex Time. 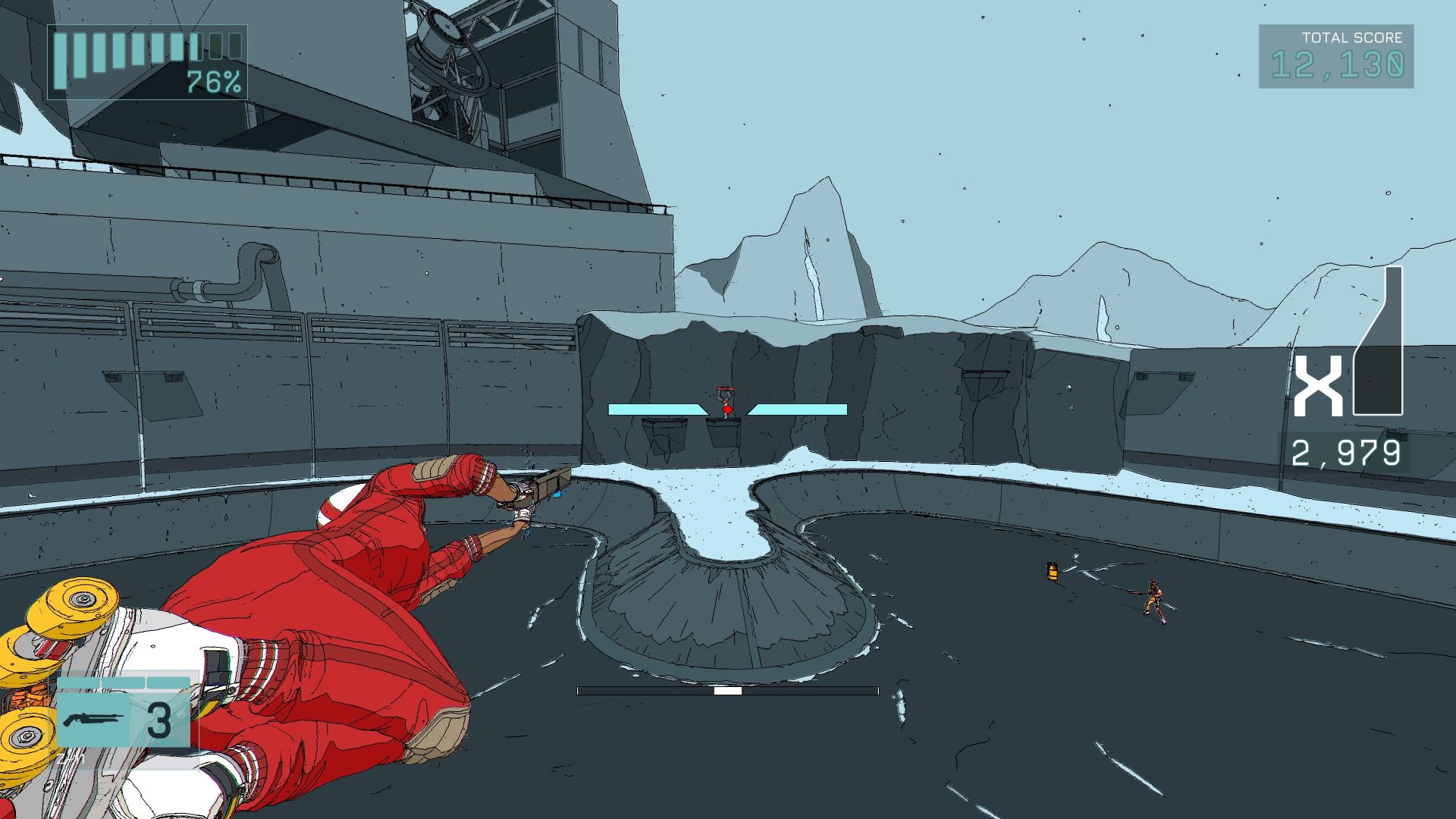 On that note, when you are in Perfect Reflex Time, you should be aiming for the Polybeams with your Z-11 and taking them out with a fully-charged shot (unless there is a Stomper in view, that is). Warheads and Snipers can be disposed of with a fully-charged Z-11 shot in regular Reflex Time, so save the "Super" version for Polybeams (if there are any currently on the stage). 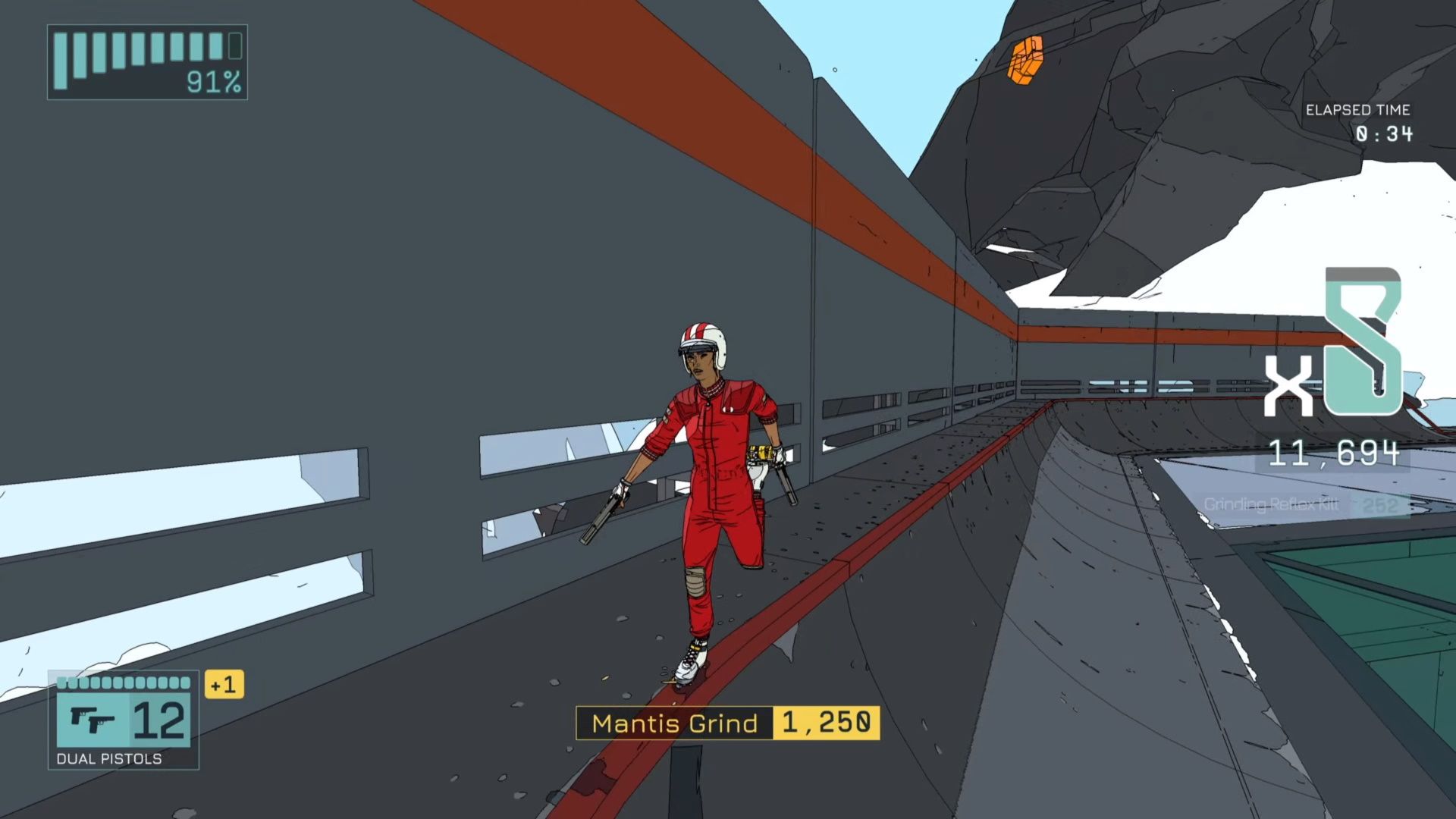 So, given that Zugspitze Station has these extended grind sections, the first piece of advice is that you should use different grinds throughout this stage. You should not have a single unused grind by the time this stage is finished. As soon as a grind has provided you the maximum amount of points—as long as your combo isn't ready to expire—you should wait for a straight section, hop up, and utilize another grind trick. 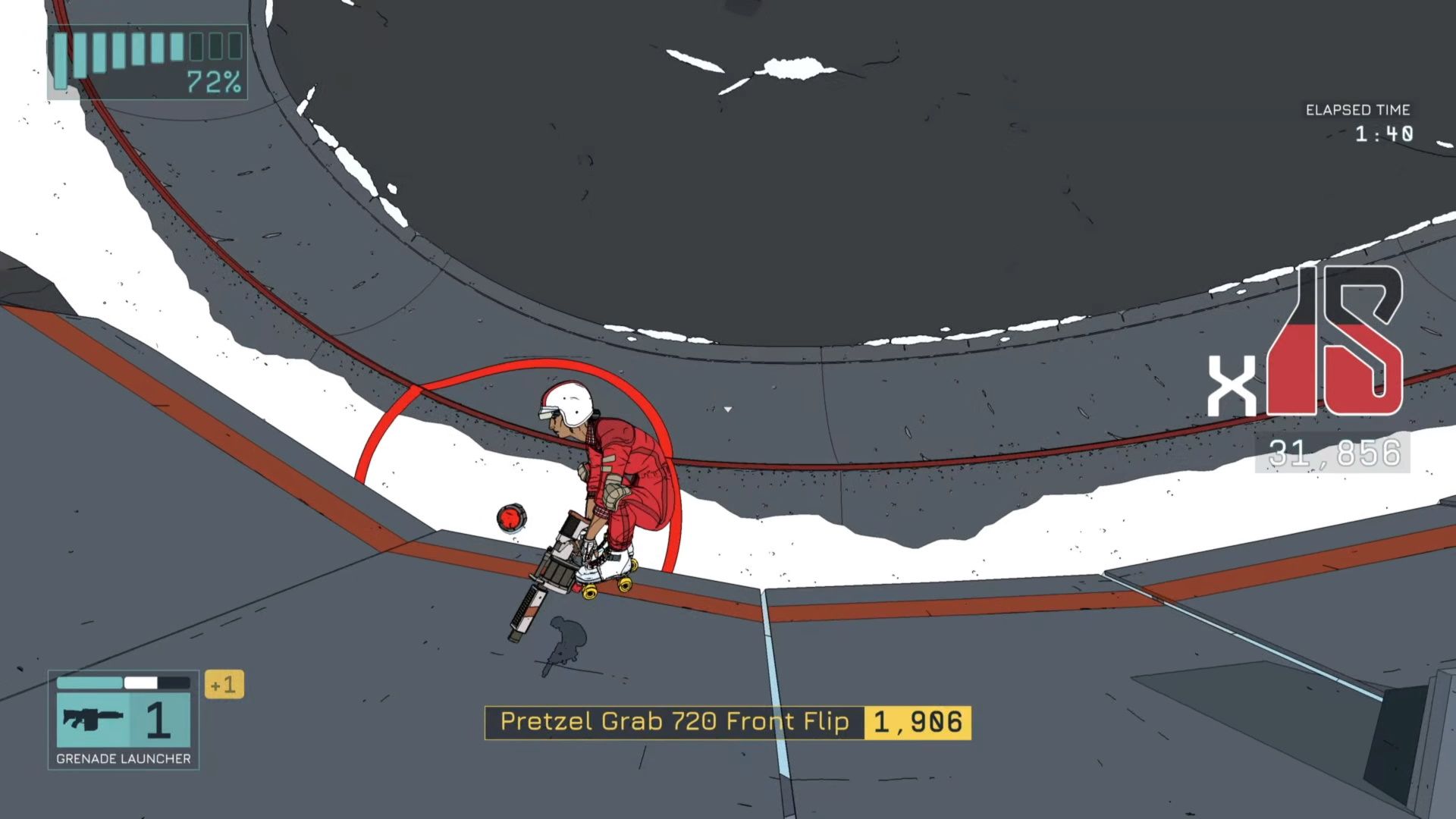 Beyond that, you will actually find a number of opportunities where you can get full grab tricks in, as well. If a laser isn't on you, and there is an enemy nearby that you can pop to keep your combo running strong, take a moment to do a big trick and hold it all the way to the ground. Make sure to do this around the Combo Tokens too, of course. This will lead to a very respectable base score.

The stratagem of leaving Grunts around the stage so that you can finish off with a bunch of tricks is very viable here, as well. So, if you can help it, leave a few of them around so that you can bank some extra points at the end of the stage!