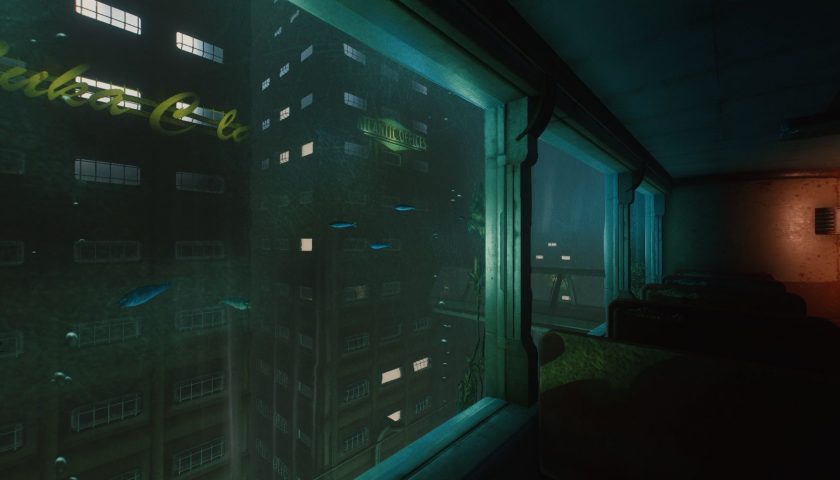 Surviving the nuclear apocalypse in the Fallout universe has been traditionally done through the use of vaults; vast underground structures that protect everyone lucky enough (or unlucky enough, depending on the vault) to be locked inside. But there are more ways to survive a nuclear holocaust than burying yourself underground. You could also dive deep under the ocean.

That's the idea behind 20 Leagues Under the Sea – Vault 120, a new mod from creator MinitelRouge. The odd was just added to Nexus Mods on March 1, bringing a very BioShock-themed vault to Fallout 4.

"Deep under the Atlantic Ocean lays Vault 120, a sprawling complex built centuries ago to avoid the madness of men up on the surface," reads the mod description. "There apart from some irradiated inhabitants and creatures you will find many spaces to create a community protected from the dangers of the world."

MinitelRouge admits that BioShock played a huge influence in Vault 120, but it's still definitely the world of Fallout. There are rad ghouls stumbling around, Nuka Cola signs everywhere, and power armor racks to recharge your heavy artillery. But there are also connecting tubes made of glass, docked submarines, and fish swimming outside vast windows just like in BioShock.

No spoilers or anything, but the trailer makes Vault 120 seem fairly deserted except for a few ghouls. One suspects that a nuclear accident deep underwater might have resulted in some mass fatalities at some point.

Vault 120 contains two workshop benches for crafting and two settlement locations. To access the underwater vault, "head northeast of Nordhagen Beach." Installation of Vault 12 is done via your preferred mod manager. Be sure to select "run last" for Vault 120, and if you have poor performance, try also installing this mod here.

And if you prefer dry land to the briny depths, there's always the New Vegas clothing mod which adds several armor sets and outfits from Fallout: New Vegas. The modder has more plans to add New Vegas stuff to Fallout 4, perhaps in preparation for the long-awaited Fallout New Vegas 2.