With the Castle completed, it's time to enter the House, the second major area in Resident Evil Village's Shadows of Rose DLC. Tricked and now lost even deeper, Rose comes across another area you'll remember from the main game.

The House section of the DLC is mostly combat-free, so you don't need to worry about resources so much. The focus, rather, is on puzzle-solving and scares. If you found the House Beneviento section of the main game terrifying, then strap in for a similar experience. Read on to see how to make it through. 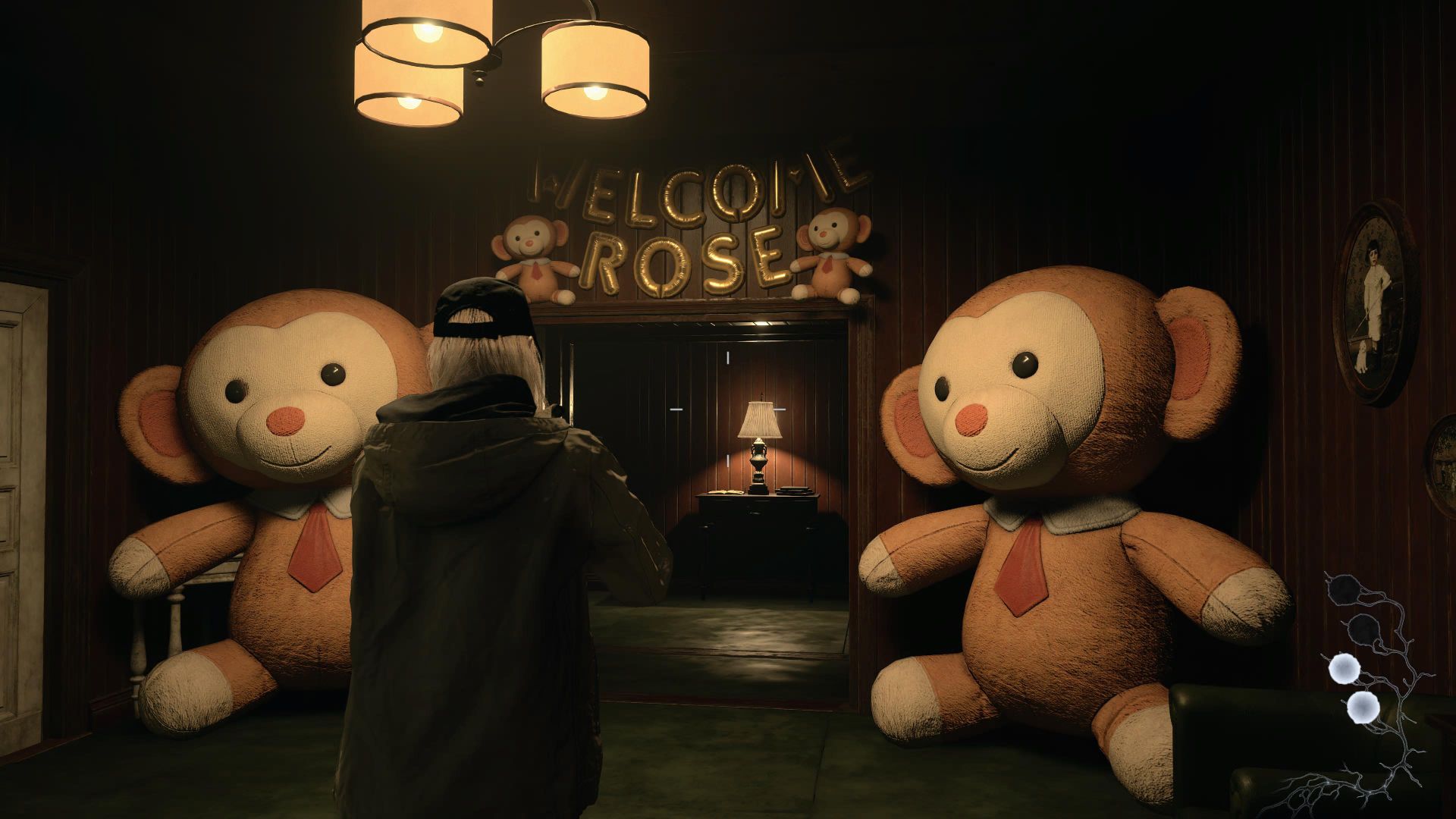 You'll start on a snowy path. There's not much to find here, so continue onwards until you reach a large tombstone, which you can examine. Behind it is an elevator that will take you straight into the House.

In the first room with the welcome sign, there's a save point on the left and a note opposite the elevator. The doors around here are locked, with one requiring some sort of relief, so press on until you reach the next room. You'll see a whole bunch of teddy bears and a crystal in a cage. Interact with the crystal.

The lights will go out, and your weapons will be taken away. At least you can't waste bullets now. In front of you is a stitched-up teddy bear, but you can't interact with it yet. To your right is a red door marked 'Jimmy's Room', but it's locked. Head to the left through the Medicine Room and into the next corridor. The door in here's locked too, so head past it and through a broken wall. There are a bunch of lovely drawings on the walls, but on the right side is one you can pick up and rotate to see a clue to an imminent puzzle.

In the next room, the Study, there'll be a locked closet requiring a combination. The picture in the last room tells you the locations of the numbers and the correct order – "The stuffed locker, the picture on the bookshelf, the desk covered in stuff." So, in the Study, look for a locker, a picture frame you can rotate, and under the desk in the corner. Then input the numbers in that order. Inside you'll find Scissors. 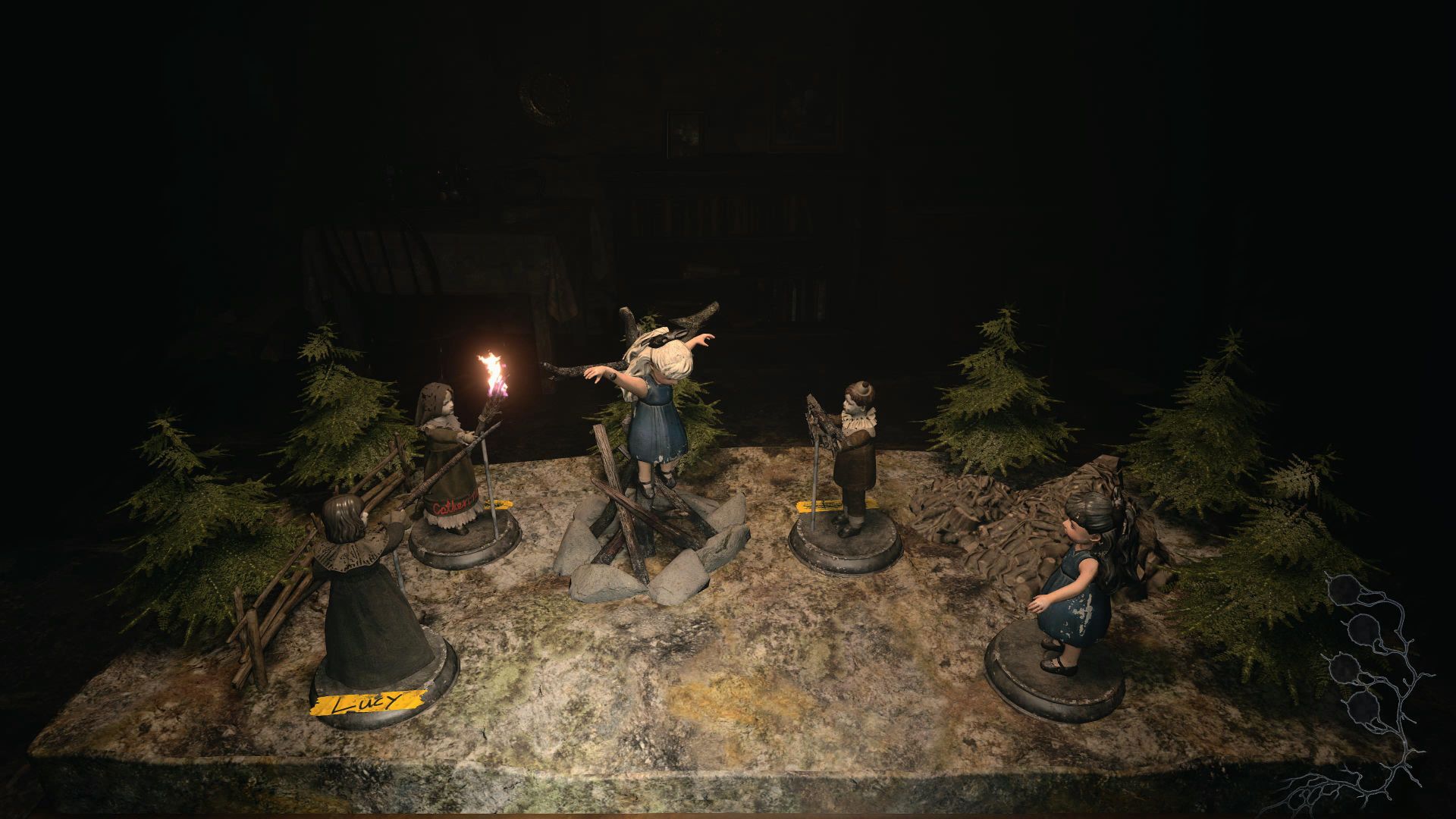 Head back to the stitched-up teddy bear and do some surgery. You'll get the Relief of a Child. The lights will go out again and in place of the bear is now a diorama with four slots, requiring four dolls. The first doll, marked Lucy, is easy – it's just to your left with a note.

Go back into the corridor you came from and use the Relief to open the locked door. Inside is another diorama with three slots, and the second doll, marked Catherine.

With two dolls found, head back to the Medicine Room. Here is a third diorama. Place Lucy on the left and Catherine on the right to get a red key, which will open Jimmy's Room. Pick the dolls back up and head there. In Jimmy's Room, break the core and head down the well to find the third doll, unmarked, but who we'll call Jimmy. 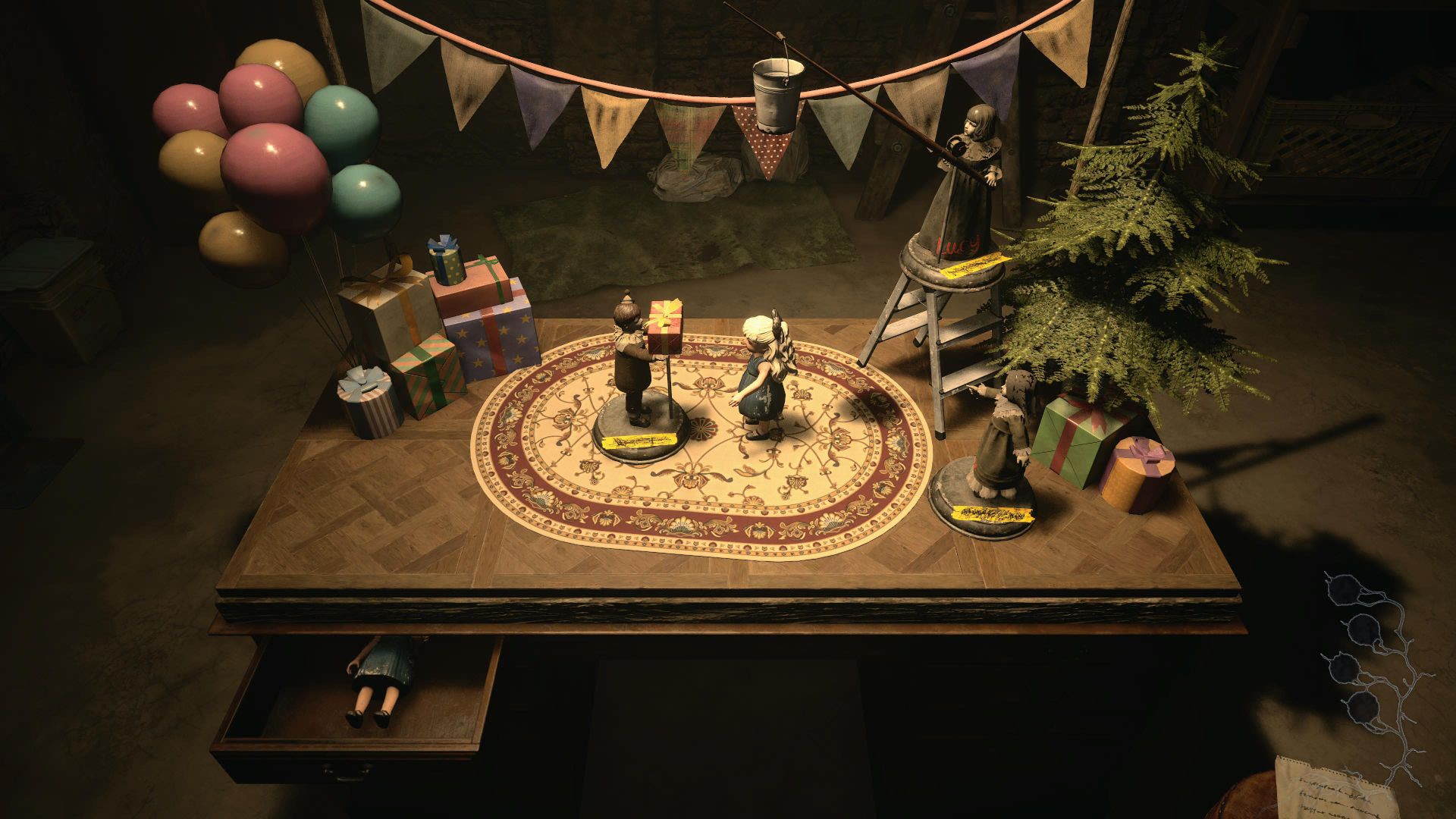 To get the final doll, head back to the three-slot diorama. Put Jimmy next to the present, Lucy on top of the ladder, and Catherine below her. You'll get the unnamed, Black-haired Doll.

Now you've got everything you need, so head back to the first diorama. From left to right, place the dolls as such: Lucy, Catherine, Jimmy, Black-haired Doll. For your effort, you'll get the Breaker Box Key. Time to get out of here! 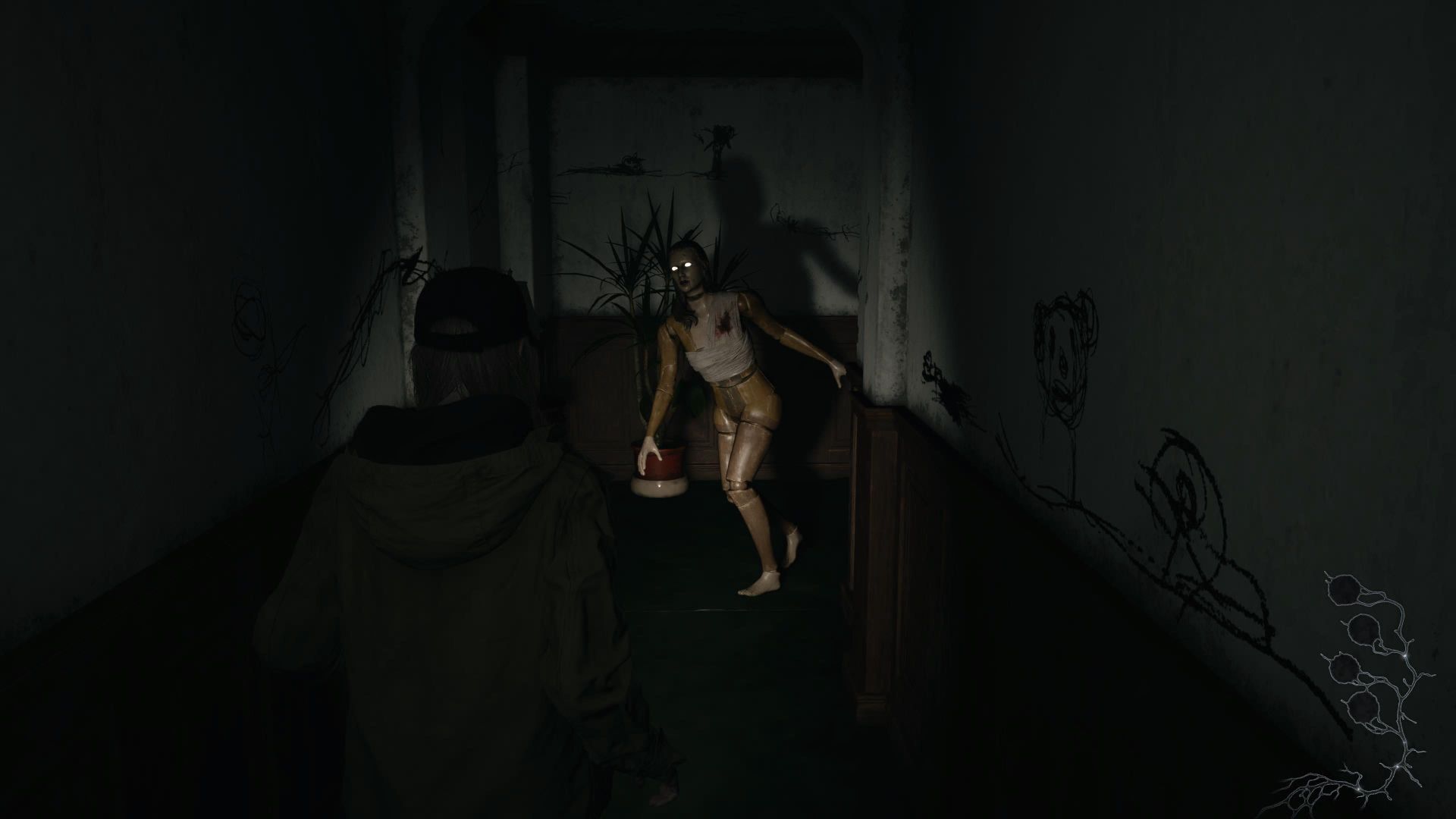 Or not. Once you've opened the breaker box near the elevator, you'll find the fuse is missing. To get it, you need to go through the newly-opened door between the Study and the Medicine Room. Some signs will hint at upcoming danger, and what you need to do to survive. In the Study, there's a mannequin that will move towards you every time you look away. If it touches you, it's game over. Keep your eyes on it and walk backwards towards the bedroom (check the Hand-drawn Map for directions).

If you're feeling adventurous, you can turn and sprint a bit before facing the mannequin again – it's not super fast.

After going down a small set of stairs, be sure to enter the first door that appears, as past it is a dead end. Through it is the Kitchen, and a core you need to break on the ceiling to progress further (go around the table quickly and you can halt the mannequin while you break it). Just past the core is the bedroom. You're safe, for the moment. 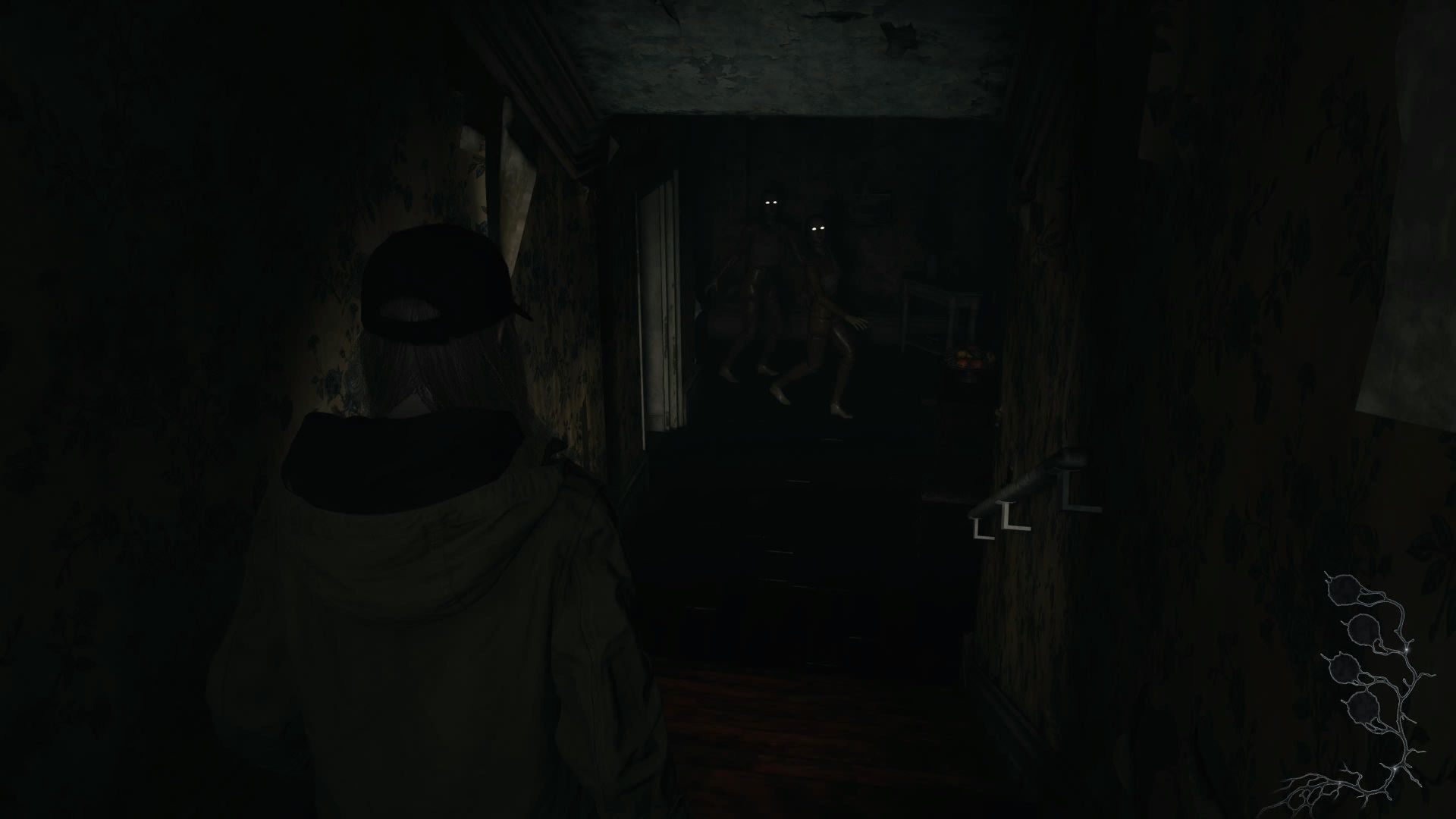 When you're ready for round two, grab the fuse. The mannequin will break down the door. Keep your eyes on it as you walk by, and move backwards once again. Go the same way you came, now towards the elevator. More mannequins will join the fray, but until you reach the Study you can walk backwards safely – they won't trigger until you're past them.

In the Study is the final mannequin, who's blocking the door. You'll need to look away from it quickly so it'll move out of the way.

A good strategy here is to try and lead the final mannequin to the right and group it with the other three as they walk in, then move backwards away from them all.

Once you're out the door, quickly put the fuse in the box and hit the elevator button. No more mannequins to worry about. 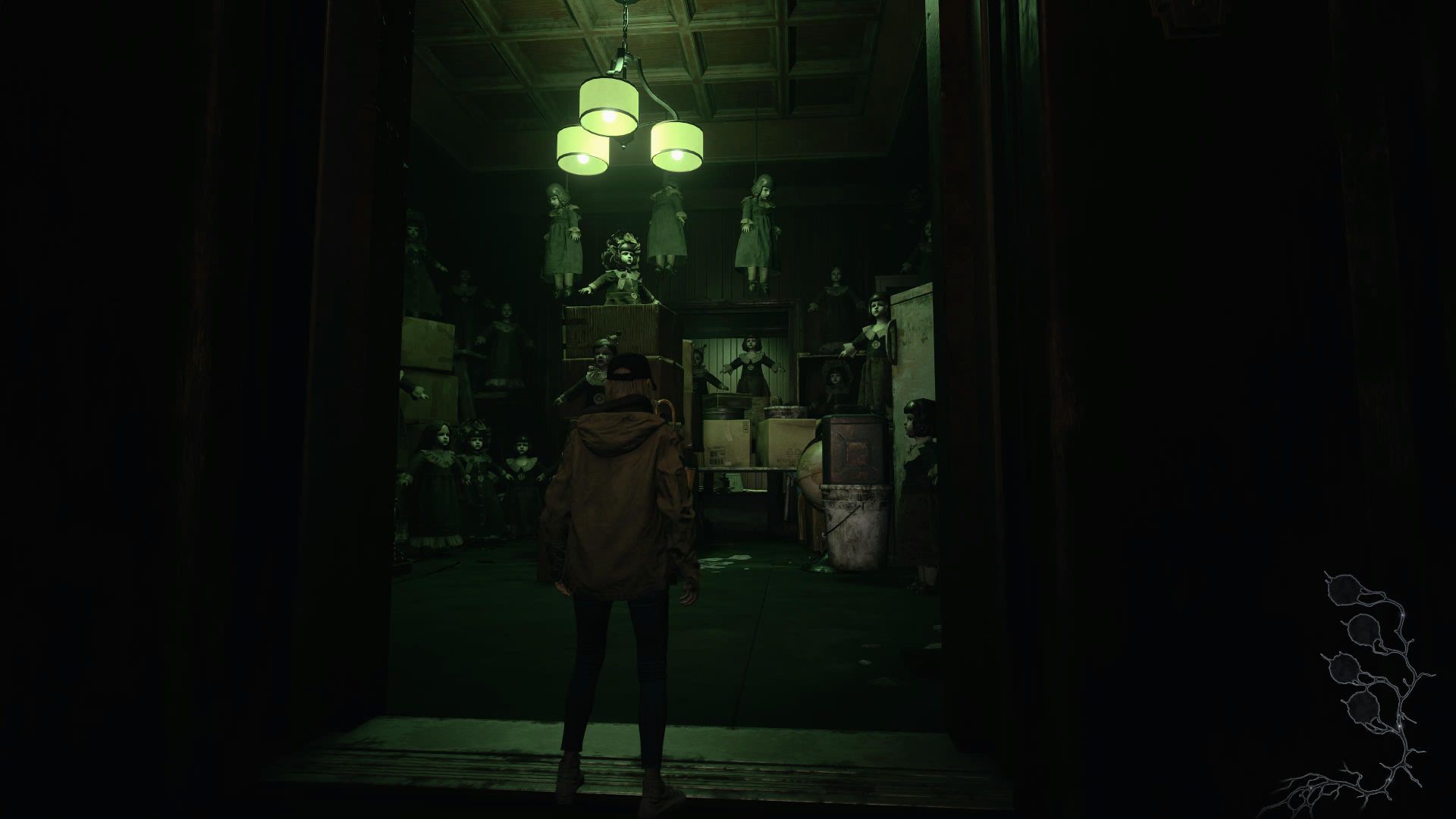 After another elevator ride, you'll have shrunk, and be facing a bunch of giant dolls. There's a save point on your left, though it's a bit bigger than usual. Go under the table, and you'll quickly see what this section's about. The dolls are on the hunt, and you've gotta sneak by, defenseless. Avoid being seen by their searchlights.

With full health, you can take one hit from a doll – you'll have a chance to escape once the animation's finished. No instant game overs here.

Starting off pretty simply, there'll be a doll going in a circle around a pillar. Just walk behind it and to the right. Continue on into the next room, and another doll will appear in front of you, patrolling back and forth. On the opposite side of the room from here is a ramp you need to walk up, but in the way is this doll and another patrolling around the desk in the middle. Take it slow, and hide under the desk if need be. Once you're up the ramp, there'll be another doll patrolling back and forth, so wait until its back is turned and make your way across the beam to the top of the desk.

Break the core here and head back into the last corridor. To the right is another core that will drop a cage and distract the dolls in front of you. While they're busy slashing away, sneak by and to the left. Up ahead is another group of dolls circling another cage, and on your right is a bit of cover you can hide behind. Get in there and look behind you; there's another core. Break it to drop another cage, then wait for the dolls to pass by your cover and continue.

Move to the next room. Make your way around and up a ramp, then jump down. You've got to make your way around the edge of this room, cover to cover, avoiding the dolls as they circle around. Don't rush, as some gaps will have a couple of dolls pass by before there's a good opportunity to cross. Once you've circled around enough, you'll hit a wall. 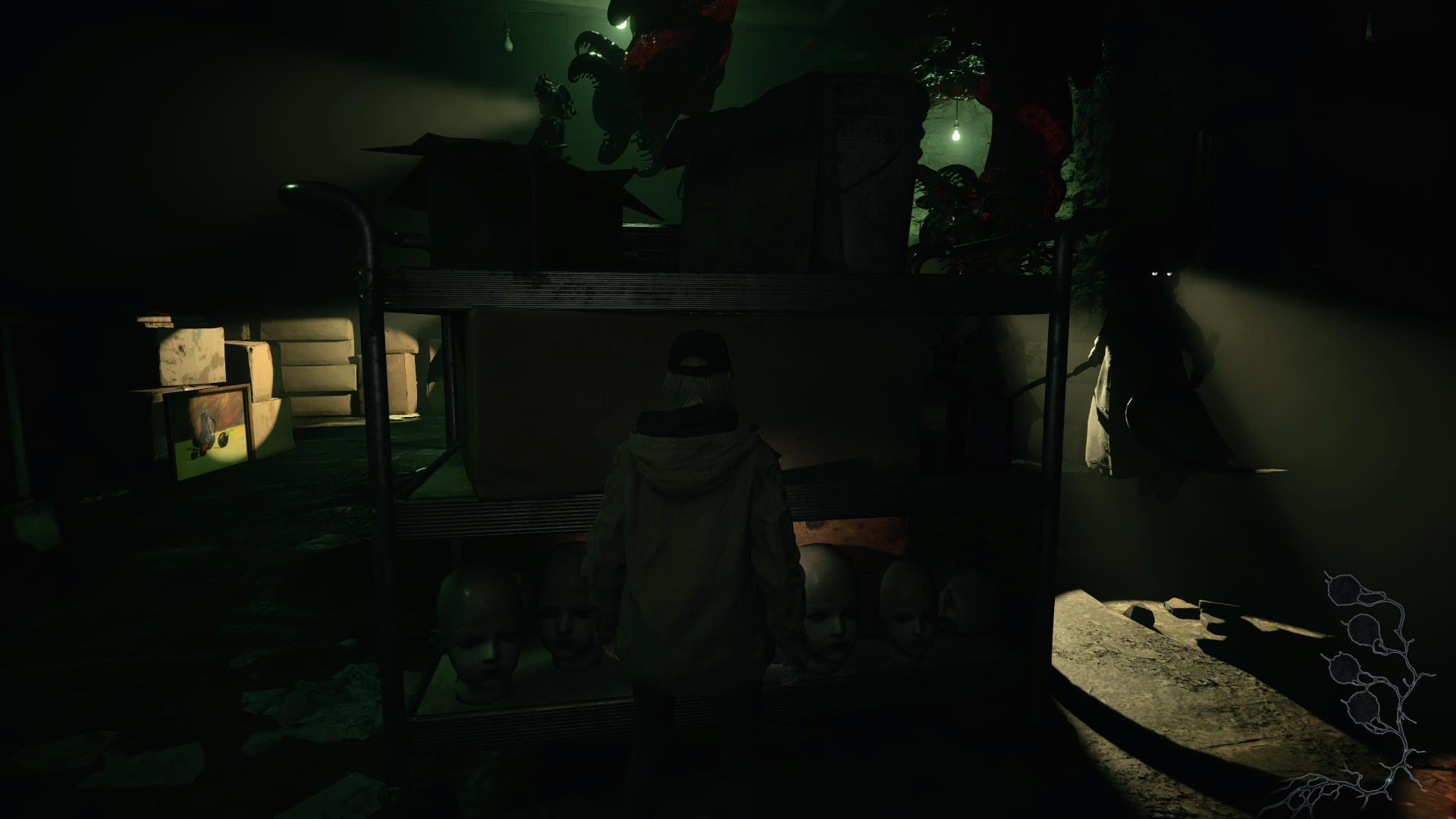 When it's clear, cross the doll's path and hide under the desk. There'll be a core right in front of you. Breaking it will drop another cage, distracting the dolls again and leaving you free to circle around the desk and break a second core above it. This one will clear the way out (in the corner to the right of the core).

In the Medicine Room, as you go around the desk, a mannequin will burst through the door. Hide under the desk until it's passed by, then go through the door it came in. In the next corridor is some White Sage and two dolls behind it. One's patrolling back and forth while the other is standing still by the exit. As the former's moving away, slip by and freeze the other (the effect is quick) to escape. By doing this you'll have a spare shot to use in case of an emergency.

In the next corridor, a doll's circling around in a corner – easy to get by. Move into the Kitchen to find some more White Sage and another doll. On the left side (from the entrance) is another core blocking progress, but as you move around the kitchen, the mannequin will burst in again next to it. It'll walk towards you and give you a chance to move around and past it, but you might want to freeze the doll to make reaching it easier. Break the core and go out the nearby door, and around the corner again towards the bedroom – watch out for the circling doll. 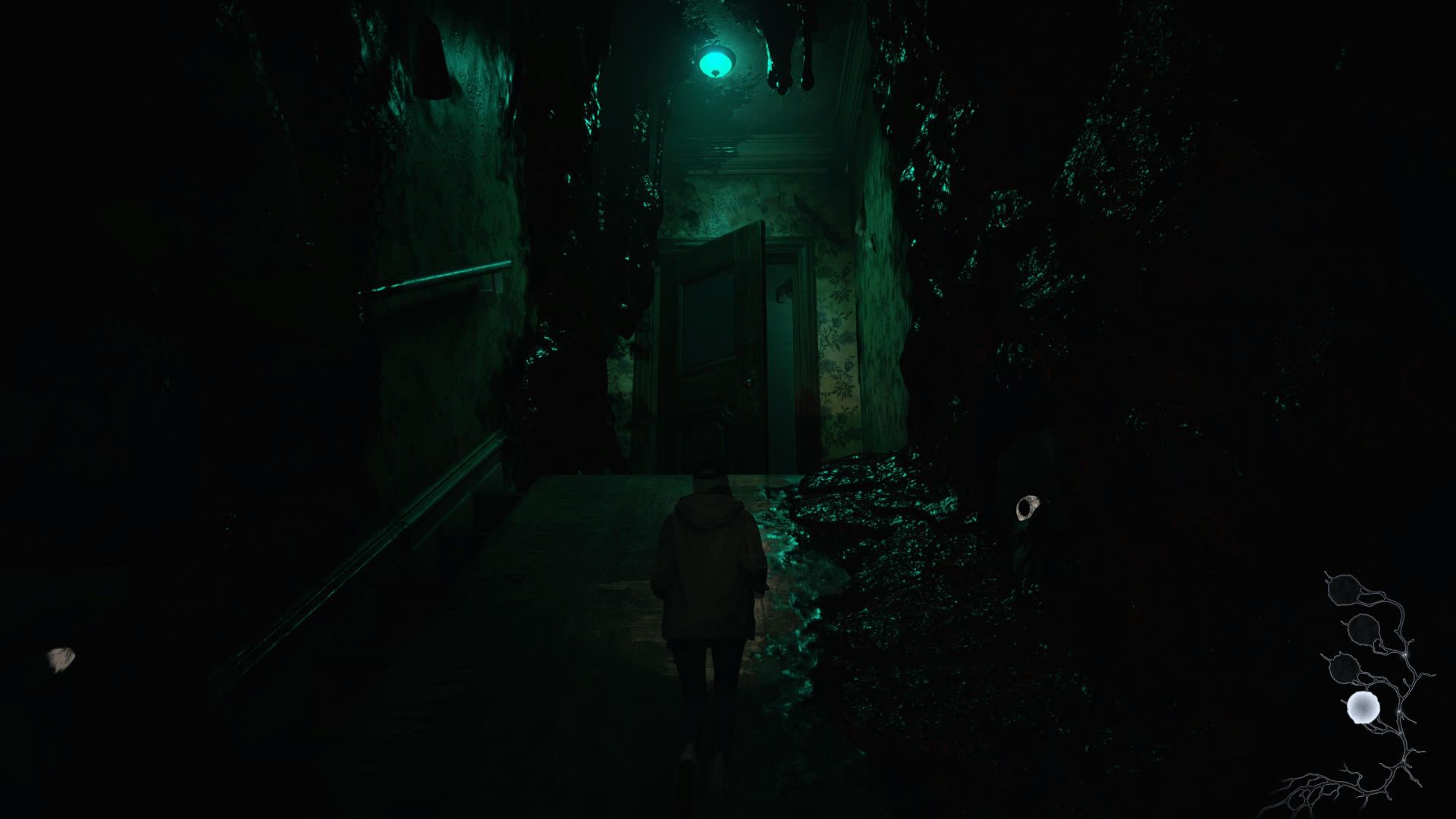 After a cutscene in the bedroom, it's time to run! Keep going until you're up the ramp and through a door, then break a core above and behind you to clear the way forward. From here it's a straight shot to the exit.

After another cutscene, you'll be in a familiar abode. Take your time and explore. There are plenty of things to examine with no time limit or danger, and there's a save point by the front door. You need a key to leave, so don't worry about accidentally ending the scene prematurely by examining the wrong thing. The key's found behind a photo on the wall in the upstairs office (as hinted at by the laptop note). When you're ready to go, use the key on the office drawer and read the letter. 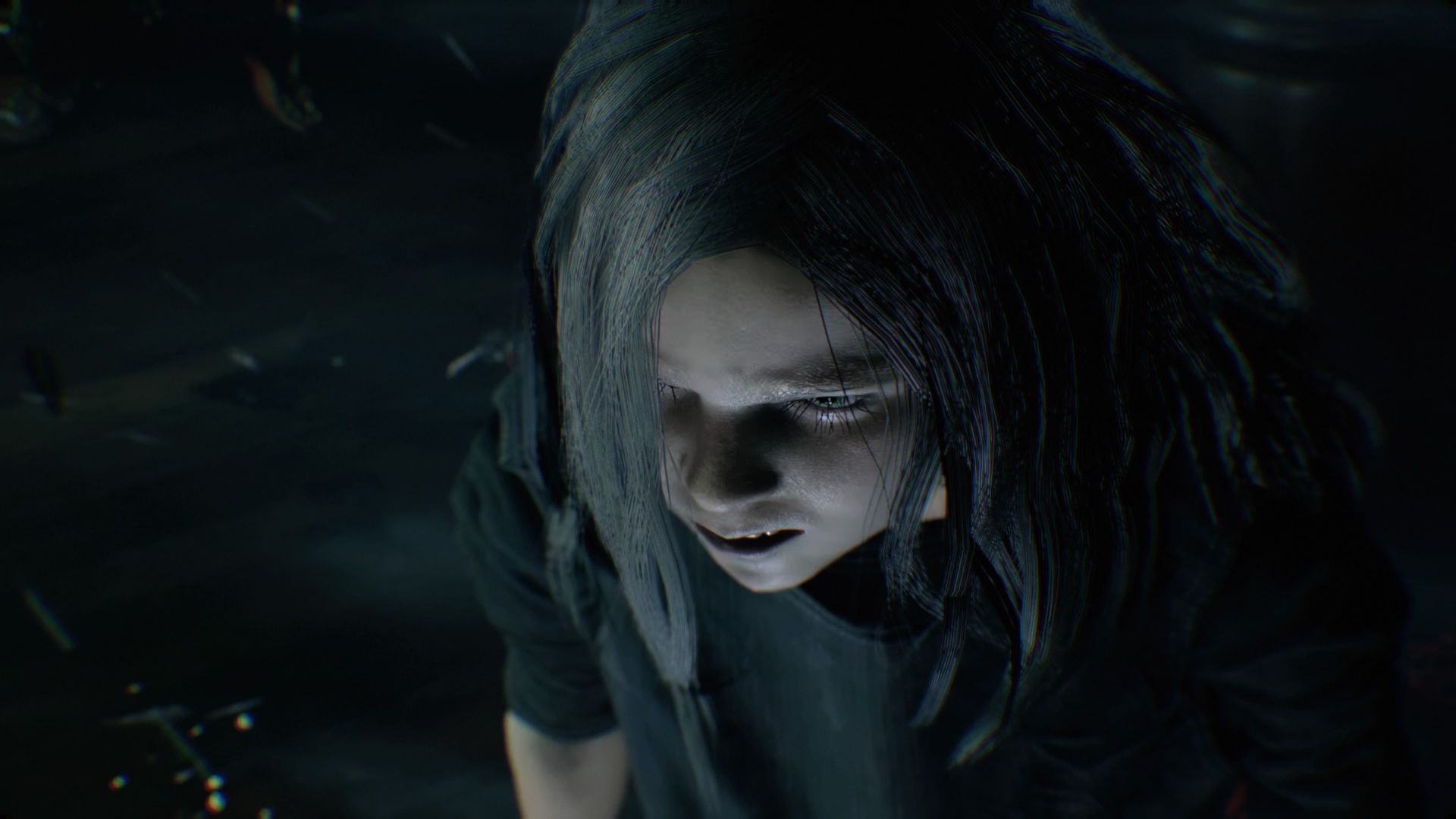 After the cutscene, it's time to run again. Keep moving forward until you reach a core. Destroy it, turn around, and run back up the stairs you came from and then to the left. In the Medicine Room is some White Sage. Eveline will start throwing dolls at you right after, so freeze them as they appear and head for the elevator.

Some mannequins will start chasing you as you head through the corridor. There'll be two cores in your way as you reach a corner – both opposite each other. You should have enough time to clear them before the mannequins reach you, but if not, make use of those powers. Head up the elevator.

In the dining room is an Amplifier – giving you a fifth power slot – and a First Aid Med. Grab these before leaving the room. There's also a save point. When you're ready, head through the door to fight Eveline.

The fight's pretty simple. Eveline will appear and throw out shockwaves. Hide behind cover until she's finished and then blast her with your powers. She'll disappear – look around the room to see where she spawns next. Rinse and repeat.

The shockwaves will last longer as you go, so be wary of stops and starts in the pattern.

Don't leave cover until you're sure she's finished attacking. Eventually, Eveline will teleport upstairs and two cores will appear below her. Destroy them to unblock the stairs. Be wary of her attacks as you make for the cover at the top.

Eveline will teleport one last time. Focus on her and Michael will tag in for the final blow. You've escaped the House!