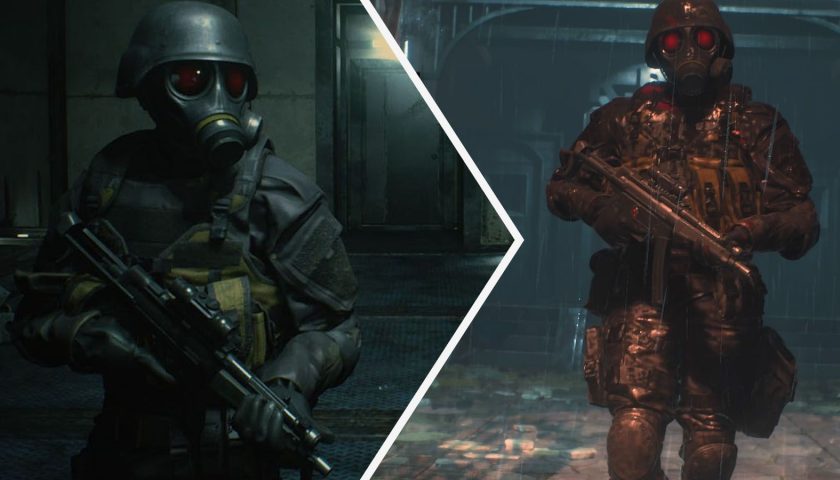 While the original Resident Evil doesn’t have much in the way of unlockable content, that all changes with its sequel. Resident Evil 2 has some of the most memorable side content in the franchise: from Extreme Battle, to B-side scenarios, and mini-games that build off RE2’s core level design and mechanics. Arguably the best unlockable in Resident Evil 2 was 4th Survivor – a canonical side mode where Umbrella operative HUNK single handedly gets through the RPD.

The Resident Evil 2 remake may not be entirely faithful to its source material, but it does rebuild most of the game without losing its original spirit. Not all of the RE2’s side modes make a comeback, but 4th Survivor returns from the original to offer one of the hardest challenges in Resident Evil 2. Set in the remake’s gritty and tense reinterpretation of the RPD, HUNK has never had a harder time escaping Raccoon City in one piece.

Out Of The Sewers 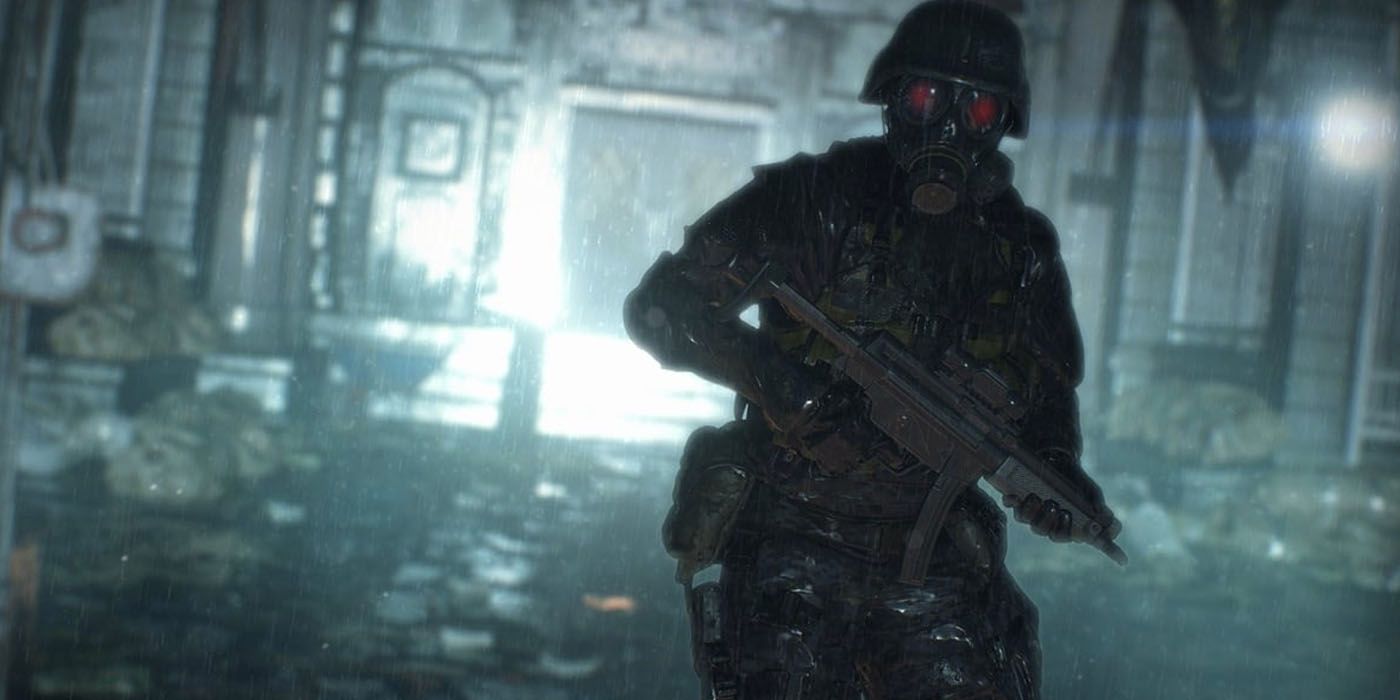 Only heal when absolutely necessary and make sure every shot counts. There are five zombies lurking in the sewer water as HUNK makes his way by. Equip the Handgun and shoot the first zombie that pops up from the water. Walk by the rest, but headshot the one by the staircase in order to stun it.

Hook left up the stairs and follow the path to find a ladder. Climb up and keep to the right after opening the door to avoid dog bite. Jump down to reach the Monitor Room where zombies are feasting on a corpse in the middle of the room. Take the left door open, headshot the zombie up ahead, and kill the dogs crossing the bridge. Headshot the staggering zombie and head for the exit.

Run down the stairs and hold to the left. Several zombies will start to rise up, but only shoot them if they’re about to attack HUNK – otherwise save ammo. Take the stairs up into the Upper Waterway and hold the right wall. There are G-Adults in the water, so try to get by without aggoring them (be prepared to drop a Grenade, though). Run up all the stairs while avoiding zombies and take the elevator up in the Workers’ Break Room. 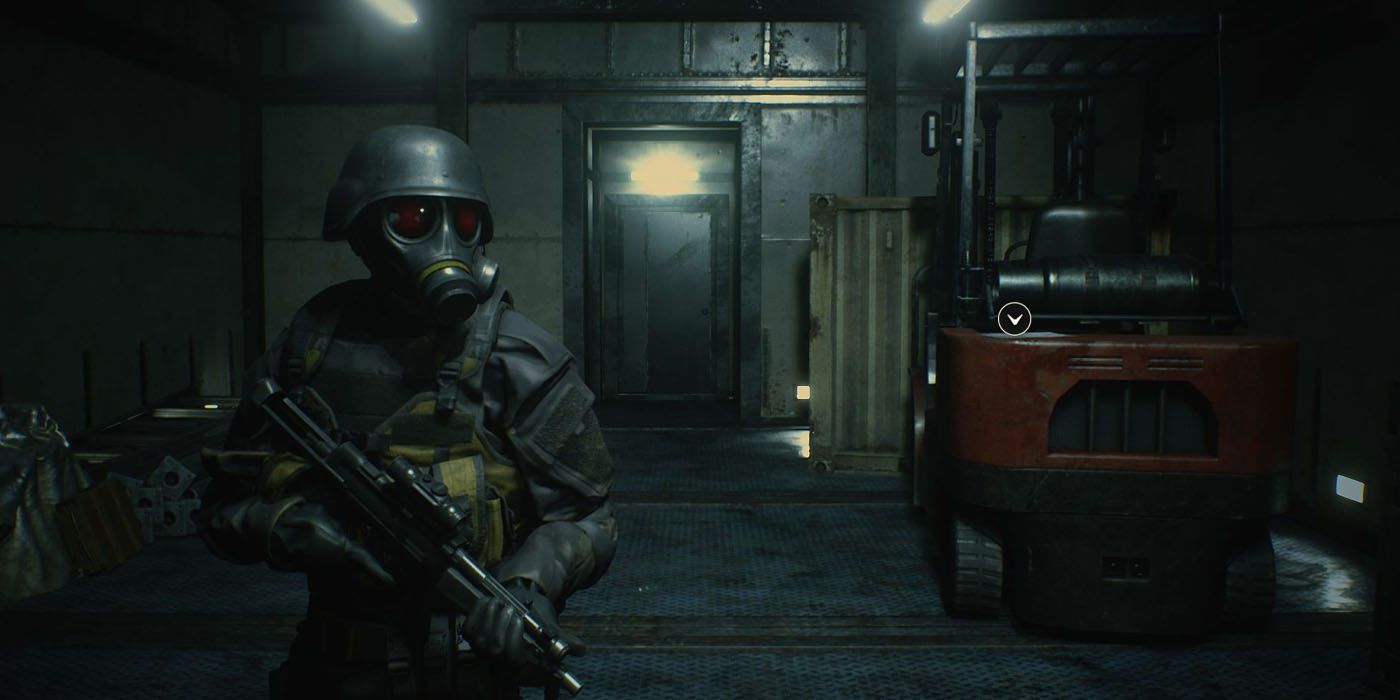 From the elevator, head up the stairs into the Underground Stairwell. There are six zombies laying on the floor who will all get up as soon as HUNK walks into the room. Fast enough players should be able to shoot up the stairs without trouble, but have a Flash Grenade at the ready just in case.

Slip into the Machinery Room and take out the Magnum to drop the Licker up ahead. Equip the Handgun and rush through the rest of the Machinery Room while avoiding zombies. They’ll step up as HUNK runs by him, but you should be fast enough to avoid them all. Kill both dogs and all four zombies inside the Operators Room from outside and then take the ladder inside. 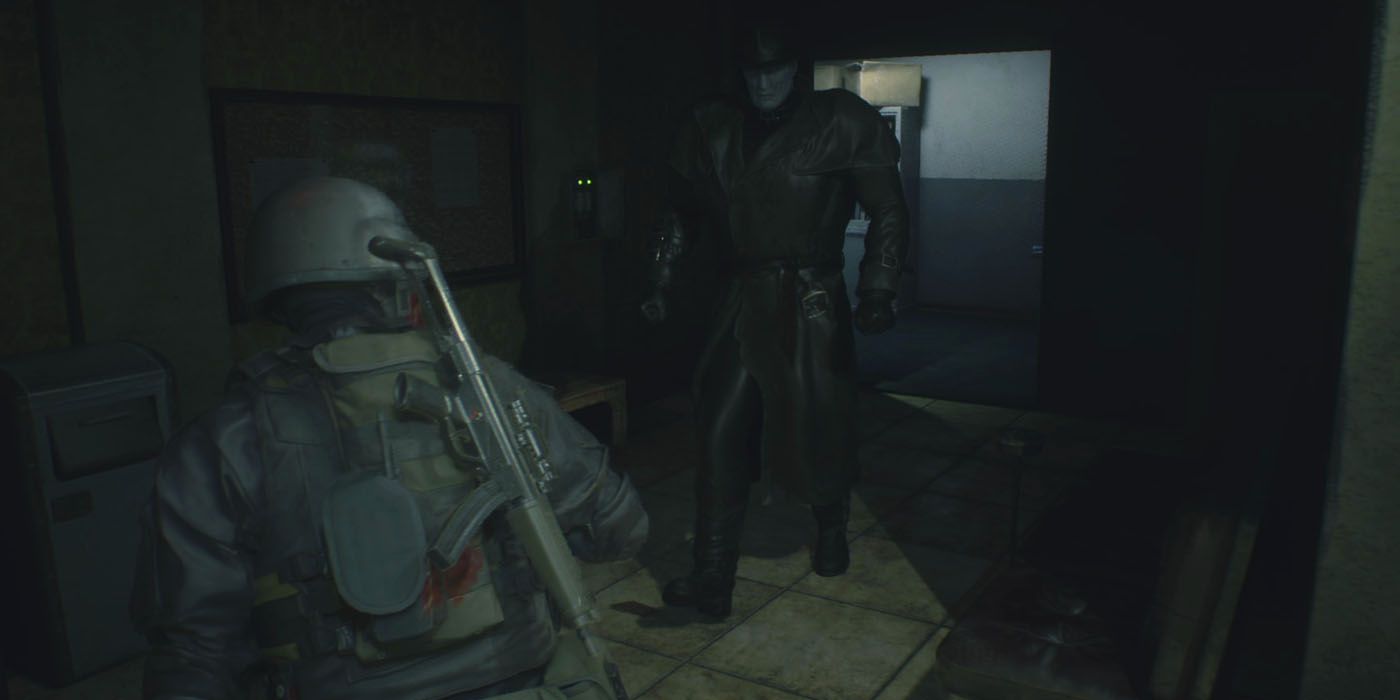 Pull out the Shotgun as HUNK emerges up into the Parking Garage and head directly to the locked gate. There are 12 zombies in total, but HUNK should be able to avoid at least 11. Headshot the zombie blocking the East Central Passage. There’s a zombie crawling on the ground to the right and a Licker on the ceiling up ahead, so carefully walk while holding the left wall.

Once you have enough space between the Basement Stairway and the Licker, sprint into the door and shut it. Take the stairs up into the Break Room Hallway, but be prepared for a surprise appearance from Mr. X while turning the corner (like usual, though, HUNK should be fast enough to run right by him).

With Mr. X hot on your trails, cut through the Watchmen’s Room into the East Hallway, shotgun blast the zombie in front of the East Office, and head inside. Keep to the right side and headshot both zombies in HUNK’s path. This’ll lead players right to the RPD’s main entrance, but the entrance will be blocked. Avoid zombies by holding to the left and enter the West Office.

Out Of The RPD 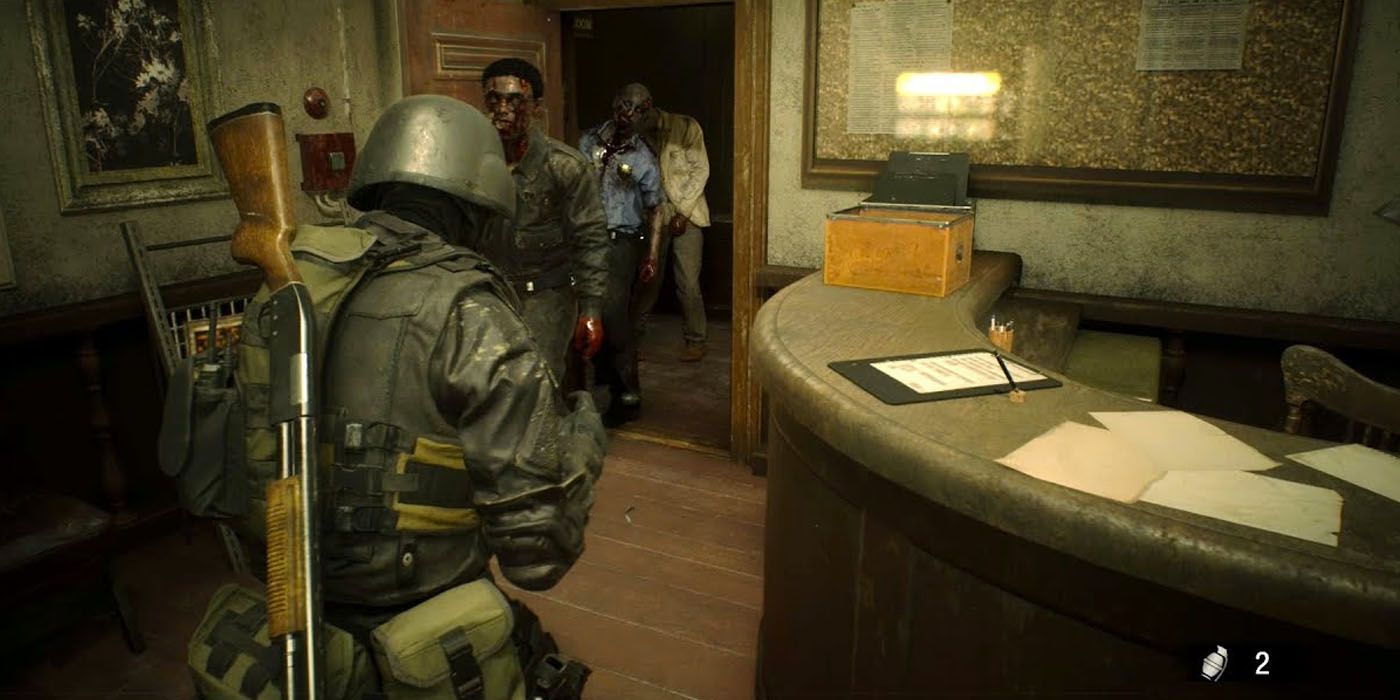 Inside of the West Office, headshot the zombie to the right of the desks and enter the West Central Passage. Slow down & walk to avoid the nearby Licker, then break into a sprint once in the West Stairway. Before stepping foot on the second floor, throw a Flash Grenade to stun all the zombies and the second Mr. X lying in wait.

Cut through the Shower Room to reach the West Hallway where 2 Ivys and a zombie are waiting up ahead. An Ivy can kill HUNK in a single hit so make sure to stun both at the same time before even attempting to run by them. As you enter the lounge, stand next to the door so a zombie breaks through it without hurting HUNK and slide into the Library.

Exit the Library, run across the Main Hall’s second floor while ignoring the door, and take out a Grenade after entering the Waiting Room. Toss it once the zombies break down the door and walk towards the East Stairway on the left. There’s a Licker ready to pounce so walk slow and run once HUNK reaches the stairwell. 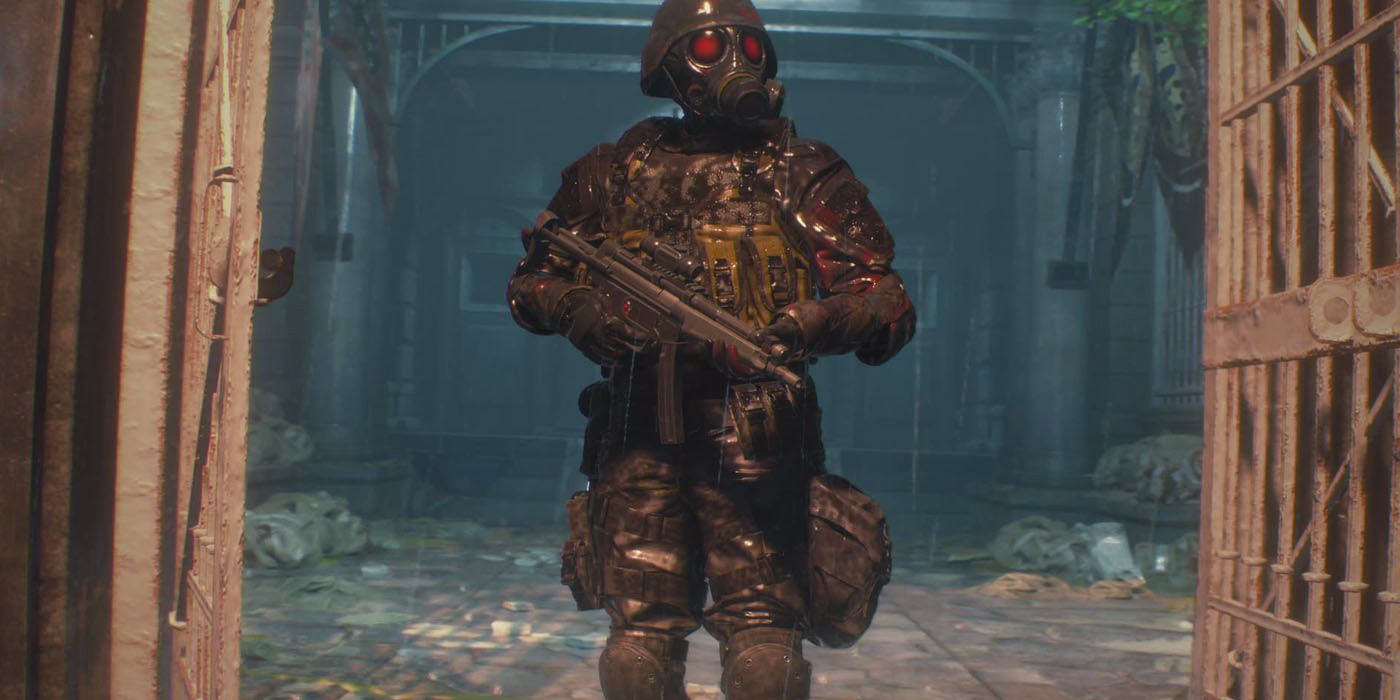 Shoot the zombie up the staircase and take the ladder down the Balcony while ignoring both enemies. Walk around the zombies blocking the door into the East Hallway and take the Fire Escape out. There are going to be an onslaught of enemies from here on out (including a mix of zombies, Ivys, and G-Adults), so get ready to use absolutely everything HUNK has left in his inventory.

The key to getting out of the RPD is to not slow down. Toss Grenades to clear a path, blind enemies with Flash Grenades, and don’t be shy with ammo. Instead of reloading, it’s safer to just swap between all four of HUNK’s weapons. If you still haven’t lost your Combat Knife, it can even be used for a quick escape. Kill everything in your path, don’t stop moving, and kick down the front gate to freedom.

Next: Every Weapon In Resident Evil 2, Ranked