A global CyberArk survey of 900 security decision-makers found that 93% of U.S.-based organizations (80% globally) have encountered employee misuse or abuse of app access in the past 12 months. Generally, security teams limit user permissions within applications to just what’s needed to get the job done (also known as least privilege). However, some users, such as executives, application owners, and administrators, may receive elevated privileges, allowing them to perform highly sensitive tasks such as approvals and modifications.

Examples of such abuse or misuse could be the business leader who tries to obtain confidential data about the sales pipeline that exceeds the scope of his role, a firewall administrator temporarily editing security rules that inadvertently or deliberately leaves the organization open to an outside threat, or a marketing lead using shared credentials to make unauthorized updates to the company’s website or social media pages.

Surprisingly, the survey also found that nearly half of organizations (48%) have limited visibility and control over how employees are actually using web apps and handling high-value data. With the typical user having access to more than 10 business applications, many of which contain high-value data, this lack of visibility puts organizations at greater risk of access misuse or abuse. This also puts security teams in a position where they may be unable to quickly determine if abuse of privileges within web applications took place. 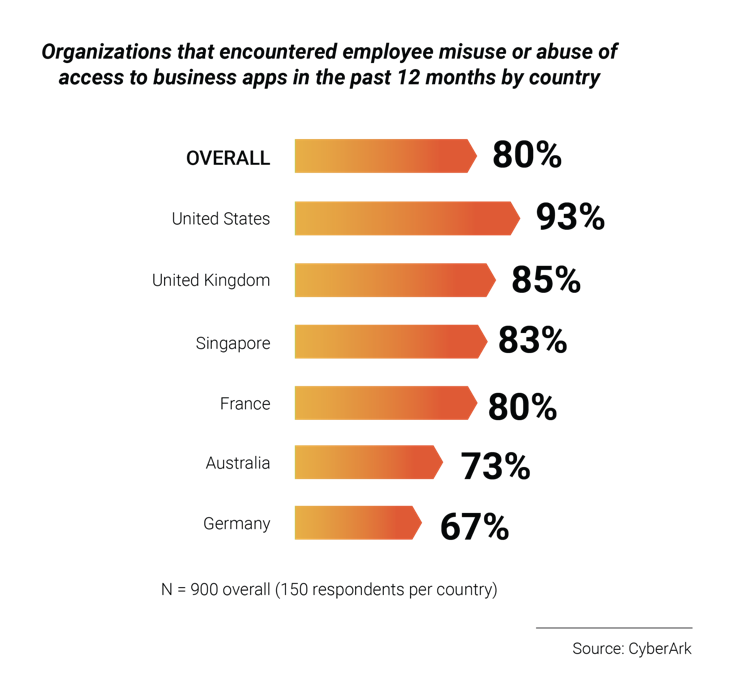 While great attention is put towards preventing the use of weak or stolen credentials via MFA and SSO, the research shows that for certain roles with elevated privileges, there’s a need for organizations to monitor, manage, and control end-user activity within applications containing sensitive data.

This data is a wake-up call to organizations. Apart from potential user misuse or abuse, a common thread in many breaches seen today is that attackers will target privileged credentials once they’ve gained initial access.

Commissioned by CyberArk, this research is based on a Censuswide survey of 900 security decision-makers and leaders at medium to enterprise-sized organizations in the United States, United Kingdom, France, Germany, Australia, and Singapore.

Read the full report from CyberArk.