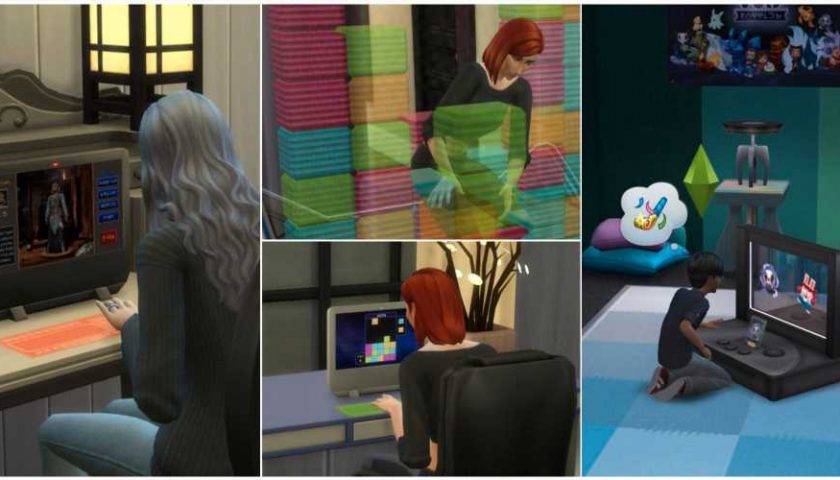 The Sims, as a series, has never been shy about referencing media of all kinds. You don't even have to start playing the simulation part of the base game to notice a reference or two; the Roomies household is a riff on New Girl, and the classic Goth family has echoes of the Addams Family. The Sims development team is open about their creative appreciation for other media, and spotting easter eggs in your sim neighborhoods can become a game within a game.

There are plenty of references to games in The Sims 4; some are impossible to ignore, while others are hidden in descriptions, requiring at least some prior knowledge to catch. The search is what makes it fun, though it's hard to miss how much The Sims 4 team really seems to love Mass Effect, specifically.

10 Capture All The Voidcritters (Pokemon) 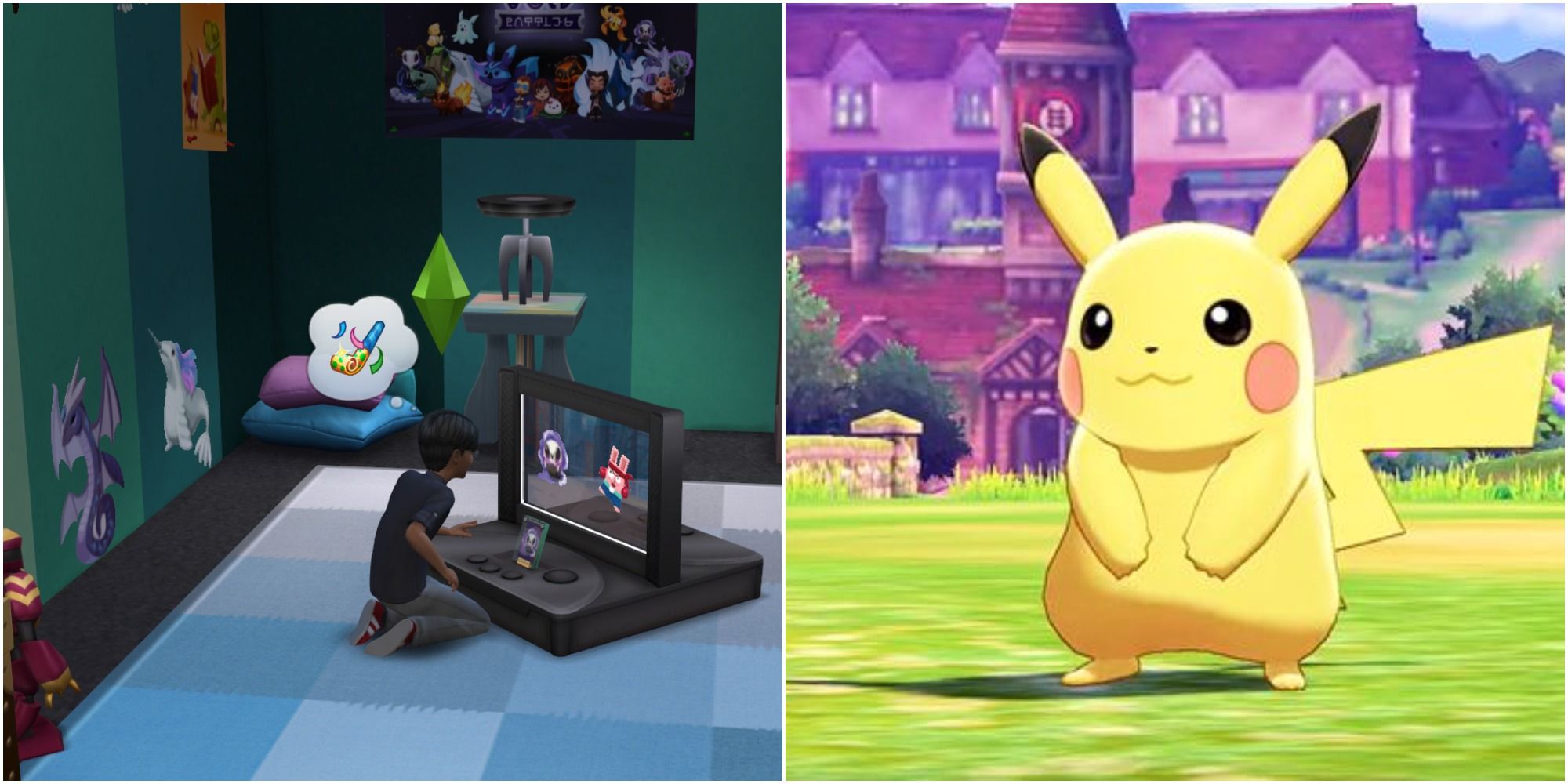 Like real life, child-aged sims love funky little creatures with elemental powers, and they love to catch 'em all. Does that sound familiar to you?

Voidcritters are clear Pokemon analogues, complete with trading cards – and if you have the Parenthood game pack, schoolyard arguments about which of the critters is the most powerful. Collecting them all is a fun activity for child and adult sims alike. It doesn't have a dialogue wheel, but watching your sims play this clear Mass Effect homage can be downright nostalgic. Density Effect lives up to its namesake, with a tiny blue map in the corner, shooting mechanics, and a peek at a dialogue between the player character and an alien being.

Plus, watching your sim take what looks like the renegade options can be hilarious – especially if you're one of those people who feels eternally incapable of picking the "mean" options in games. Don't worry – your sims can do it for you!

8 Sovereign, But A Lamp (Mass Effect) The description for this item says it all: possibly malicious jellyfish. The Sovereign is another shout-out to Mass Effect and its terrifying alien-machine force, the Reapers. Specifically to the first Reaper you meet, Sovereign, who you meet in Virmire back in Mass Effect 1. While Reapers are not, in fact, jellyfish shaped, the inclusion of the word "jellyfish" will definitely get long-time Mass Effect fans thinking about one of the most iconic lines in the series: "You big, stupid jellyfish."

It's not the first Mass Effect reference you can find in The Sims 4, but it is the most stylish, plus an excellent centerpiece for a coffee table. And a great reminder that you should really replay Mass Effect. Everyone loves Tetris. It's the perfect game for wasting a few minutes or a few hours, just dropping blocks and watching the numbers go way up. Your sims feel the same way, though their version of the eponymous game is called "Blicbloc," and they even have a very stressful-looking VR version.

Regardless, it's one of the few games your sim can play before improving their gamer skills, so you'll likely see many little blocks fall on your sim's computer screens. Be prepared to watch them ignore your directions and all their responsibilities in favor of Blicbloc.

6 Decor Should Be Simple And Clean (Kingdom Hearts) 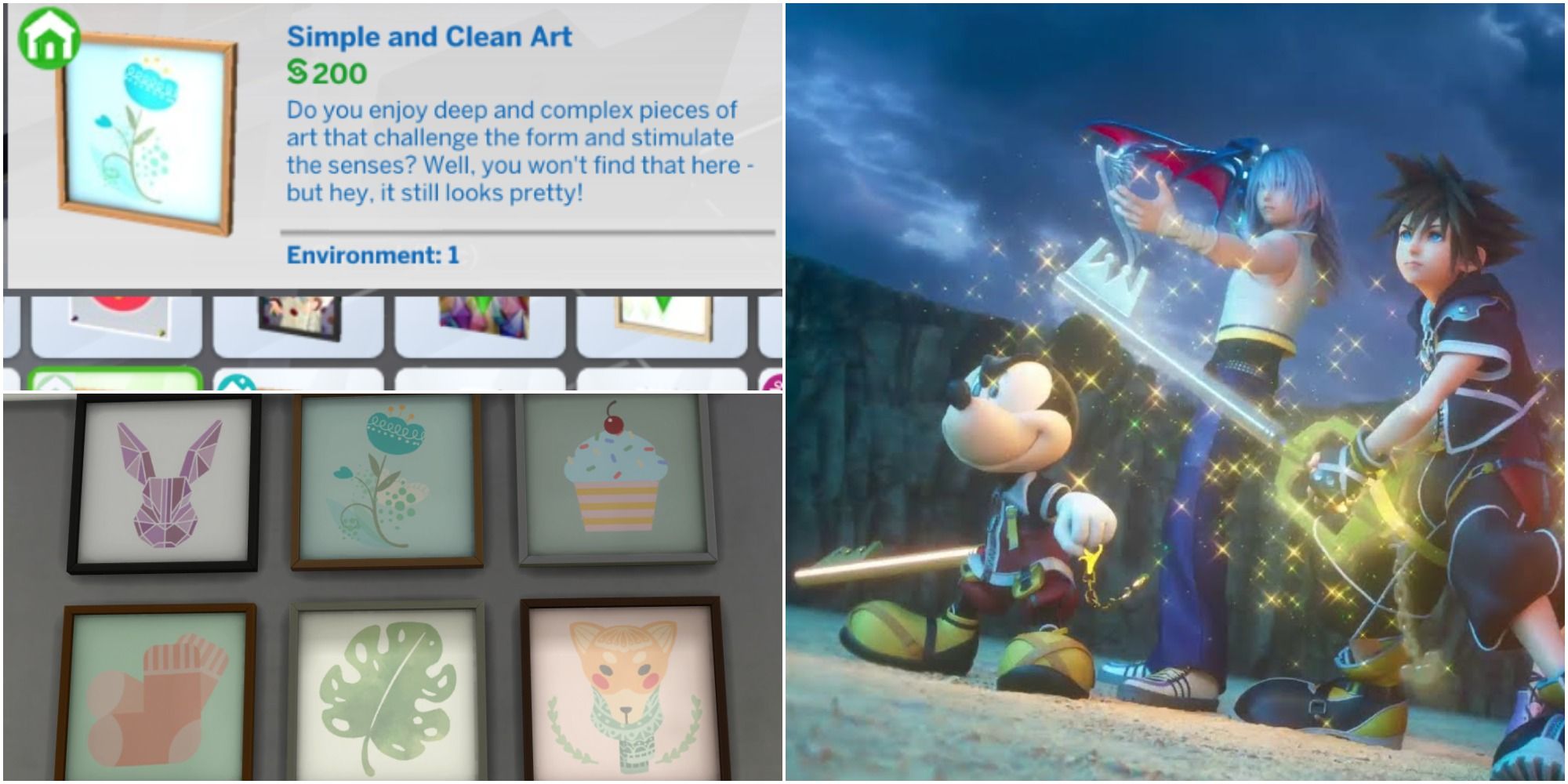 There's no way to read the words "simple and clean" without thinking of Kingdom Hearts. The painting is exactly as advertised, uncomplicated pictures in pretty, muted colors. If not for the title referencing one of the best songs in video game history, you may overlook it entirely.

But that would be a mistake because it's the description that ties the whole thing together. There's something delightful about The Sims poking a bit of fun as the notoriously convoluted plot of the Disney/Square Enix crossover series, especially since The Sims is not entirely without its own weird, complicated lore and timelines. 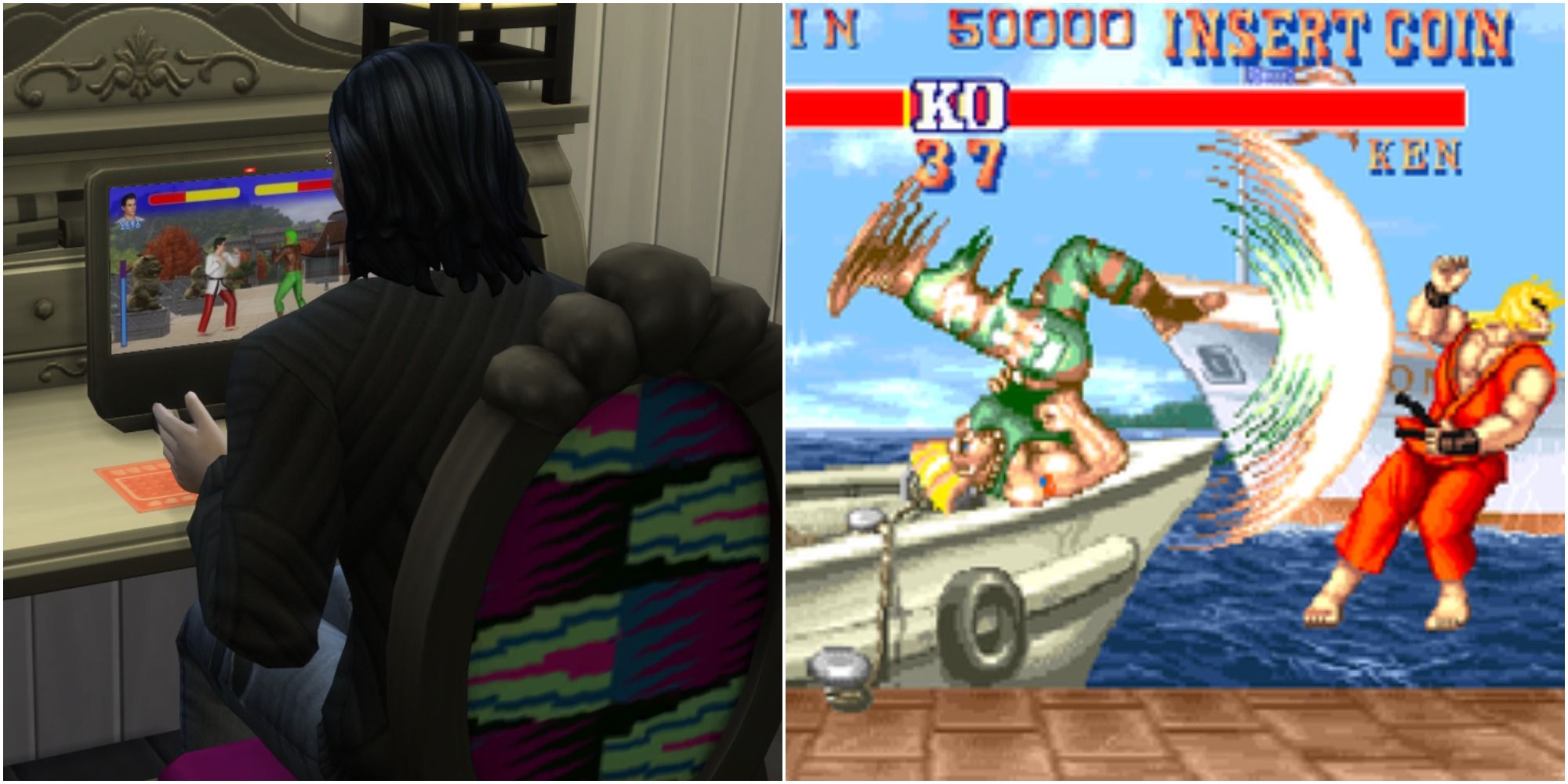 Unlike most other references The Sims 4 deals in, this one is closer to a love letter to the fighting game genre than a specific title or series. Once your sim reaches level nine in the video gaming skill, they'll have the opportunity to play Road Rival Alpha, a fighting game.

Unfortunately, you can't watch your sims execute extremely difficult combos since all sims play games with the same amount of enthusiastic flailing. Even without including the game pack Journey to Batuu, you can find a lot of Star Wars references in The Sims 4. Outfits, hairstyles, accessories, make-up, you can make your sim look like they just stepped out of a galaxy far, far away. But then there's Revanne. It's a more subtle reference in comparison, as it's just a poster of a mysterious figure from gaming lore.

While there's no way to know whether a version of BioWare's Star Wars: Knights of the Old Republic exists in The Sims universe, Revanne is a little too close to Revan to assume the answer is no. Especially when you consider the poster's description mirroring key aspects of Revan's character. While we don't see much of this particular game, as soon as your sim boots it up on their computer, it shows a character creation that echoes Dragon Age: Origins. Of course, this is not a surprise, considering Dragon Age and The Sims are both beloved EA franchises, and each has massive amounts of devoted fans.

Still, the idea of your sim getting lost in an RPG world where, ideally, a character not unlike Morrigan is romanceable for any player is a really fun one. The Sims is a place where dreams can come true, after all. 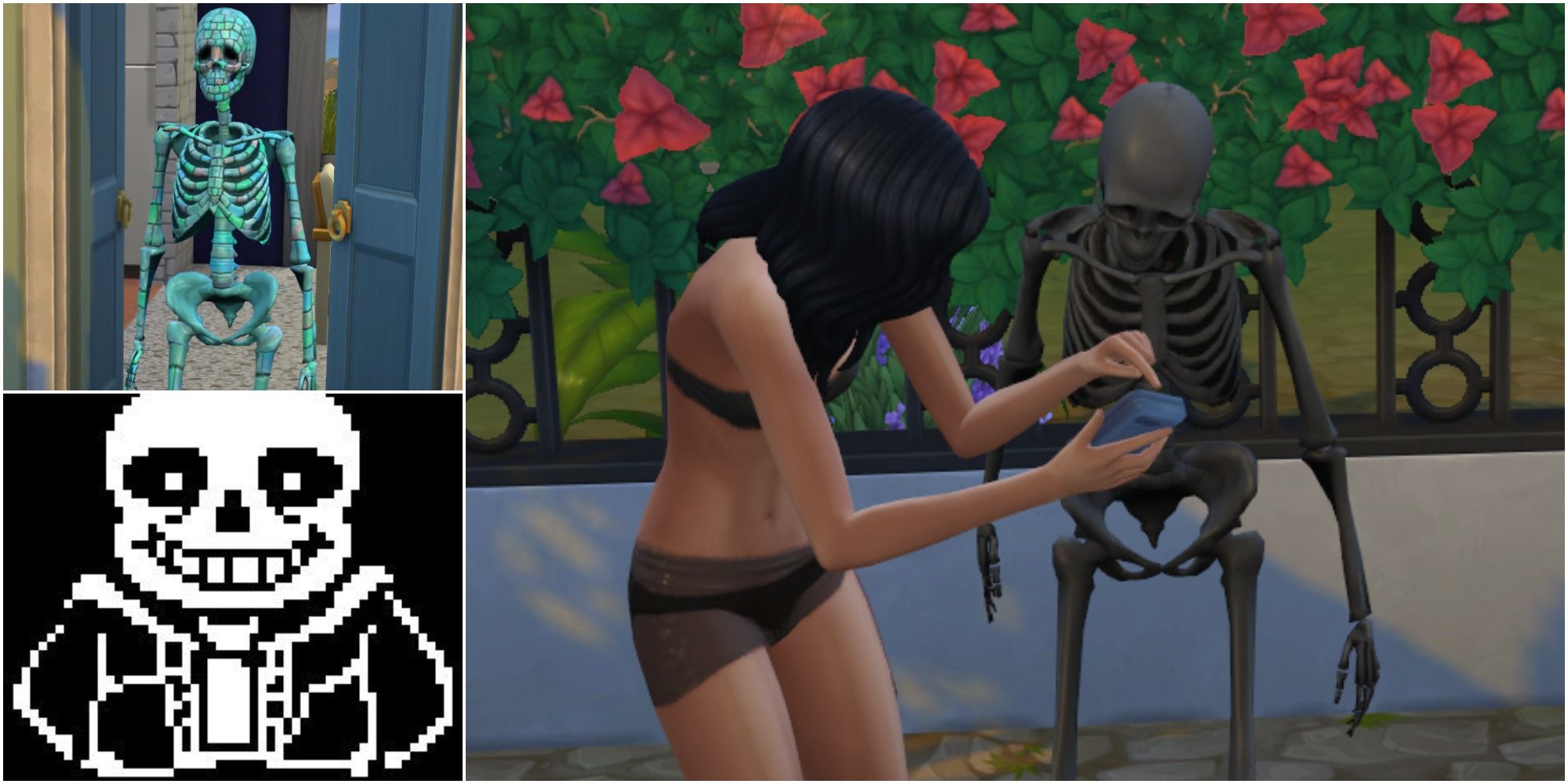 While it can be time-consuming, making your sims into archeologists can be pretty fun. They wander through a lush jungle and visit ancient temples where, on occasion, skeletons can come to life. While they may seem spooky, they're honestly pretty pleasant and chatty.

One of those skeletons can be named Sans. Like, Sans from Undertale. The hoodie-wearing skeleton speaks in two distinct languages: awful puns and comic sans. While, unfortunately, sim-Sans does not make skeleton jokes (though they might play xylophone on their ribcages), it's still a great nod to the popularity of Toby Fox's 2015 mega-hit. 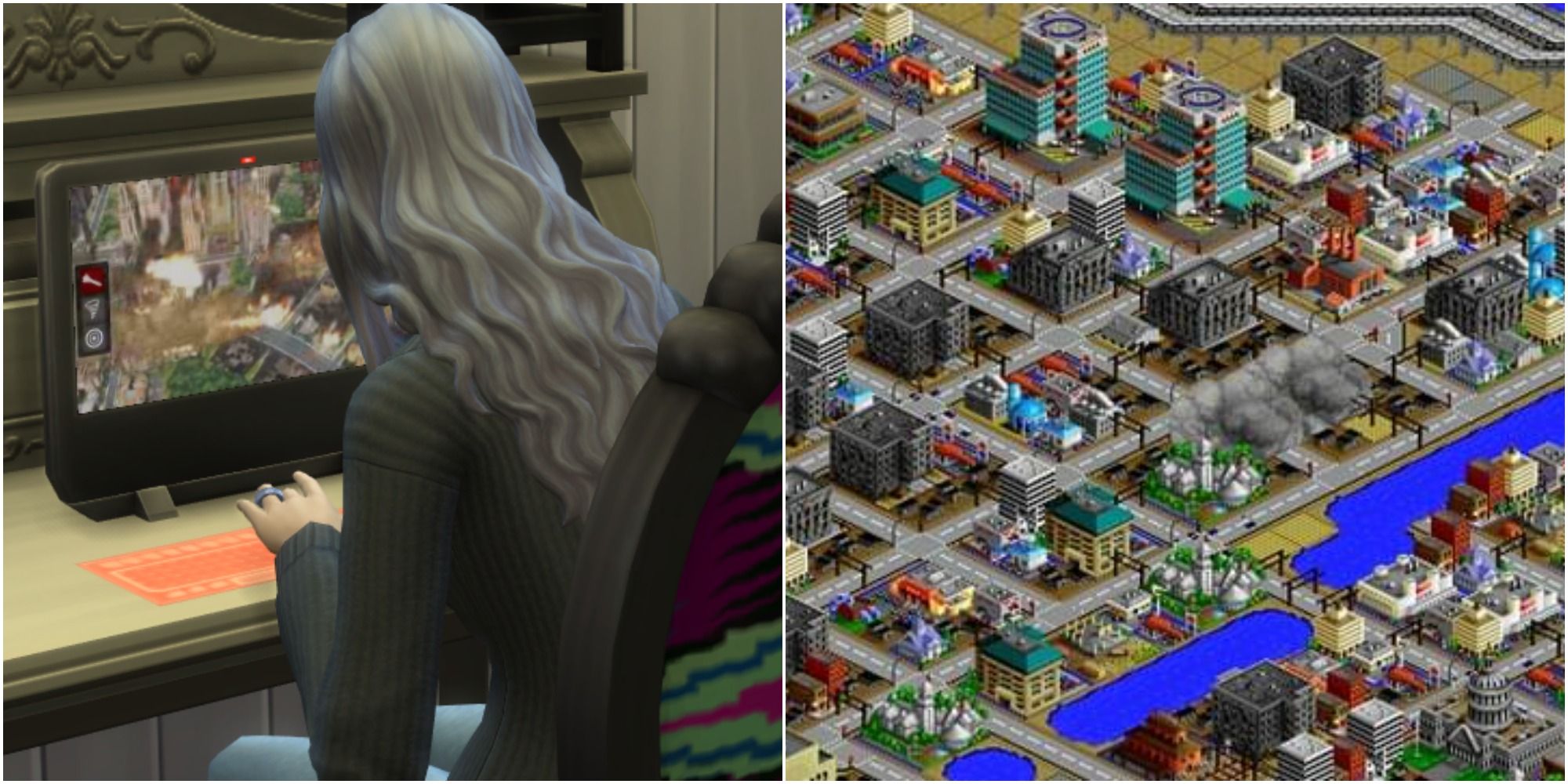 The Sims has not been shy about referencing itself, either. SimScuffle appears to be a city-planning game, à la Sim City. At least, the short clip you can see your sims play gives that impression. Although sadly, you won't see your sim do any proper city planning, they don't zone lots or micromanage public transport. Instead, they'll be furiously clicking buttons as meteors fall onto their city.

Who hasn't played Sim City just to reign terror on some poor unsuspecting town via aliens or giant robots, or, if you're boring and realistic, a surprising volcano? Sims, they're just like us!