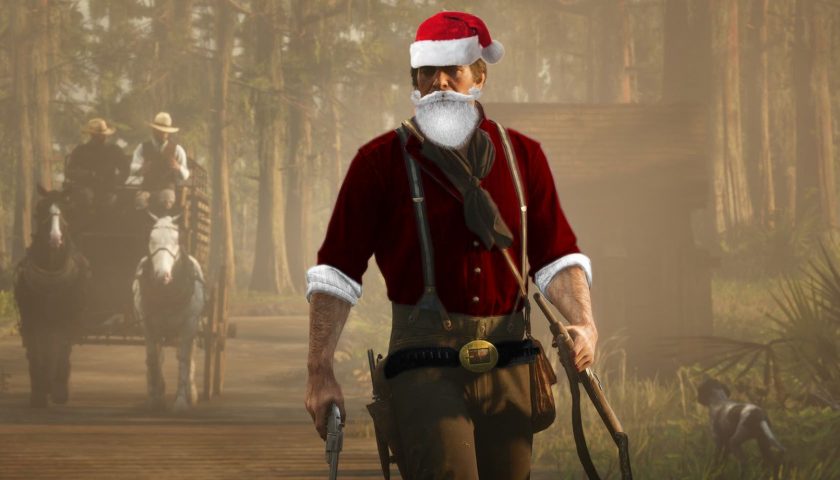 Christmas has come to the Wild West! You may not have noticed what with all the gang violence and the fact Red Dead Online will be shutting its saloon doors sooner rather than later, but that hasn't dampened the Christmas spirit of this posse. They've dressed up as Santa and his elves and are a hit, but they're more likely to give you lead than coal if you've been naughty.

The posse can be seen in the saloon in Valentine, posing menacingly over the unconscious (or dead) bodies of the naughty patrons. These elves aren't here to mess about, if you're naughty expect some lead in your gut and a lump of coal to burn your house down.

Santa was dressed pretty convincingly, in a red suit with a nic efur trim. It would have been nicer if the trim was white, but have you tried cleaning the dust out of coats in the Wild West? Nigh impossible. The big white beard certainly helped to complete the look.

With the elves, you sort of have to squint a little bit to really get it, but they've gotten as close as they can. Or maybe they're spot on and my colour blindness is just really playing up right now. One of the two, who knows? Anyway, they're decked to the halls with green boots, waistcoats, and jackets, with red trousers to compliment the attire.

One player wrote, "This is the type of shit that makes me come back to this game over and over." Despite the game officially being put out to pasture by Rockstar, the community is still keeping it very much alive, and it saw its highest concurrent player peak ever back in November.

The final picture in the Reddit post shows the posse in the snow, looking like they've just arrived on a sleigh to determine if you've been naughty or nice. Better ho-ho-hole up somewhere safe if you see these elves come knocking, as we doubt they'll be singing Christmas carols to all you outlaws.