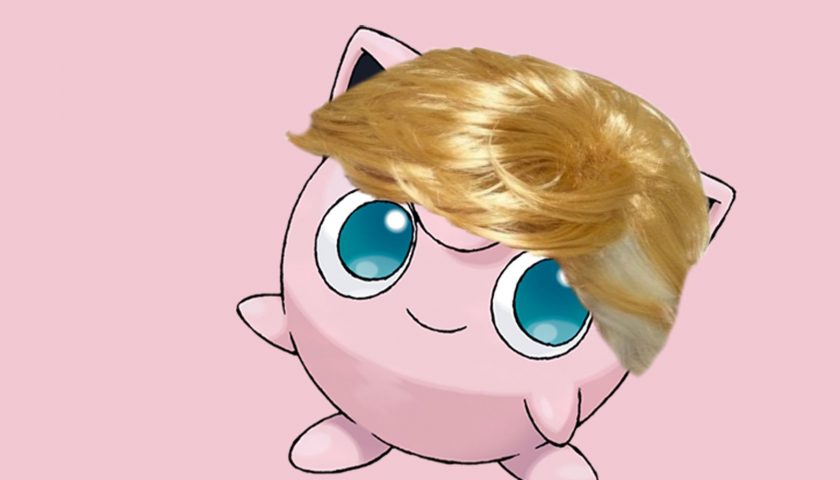 People often like to think of what Pokemon would look like if they were real. Detective Pikachu gave us our first look, straight from the minds of the creators, but fans have more… nice ideas. One redditor shared artwork of a realistic Jigglypuff, and it looks exactly like baby Donald Trump. I've seen it, everyone at work has seen it, now you have to see it too.

Show me a person who doesn't see the resemblance and I'll show you a liar. The pink, round race, messy pale blonde hair, the quietly evil stare, it's all there. It's… awful. There are no other words for it. Gone is the cute little squish ball, the mischievous circle who likes to draw on people's faces. Baby Trump is here, and he'll be in your mind for the rest of your life. Sorry.

As well as this realistic Jigglypuff, people have been quote tweeting a two-year-old tweet that reads, "Tweet like Pokémon were real." My timelines is awash with hilarious scenarios that I could 100 percent see happening if 'mons did indeed walk, Fly, and Surf among us.

In a world where Godly forces of nature roam free, and many of them have grudges, fights on the scale of natural disasters are sure to break out fairly often. Well, people would quickly get sick of it.

Other people would enjoy having an intelligent friend to enjoy certain recreational activities with. No lighter? No problem!

There's also a slight issue though. there are so many battle mechanics in Pokemon that using one at the wrong time could be disastrous. Dynamaxing a 'mon in your home would destroy a neighbourhood, and even Terrastallising could have funny consequences.

There are also lots of villainous teams, and while they may seem cartoonish and silly in the games, they'd be no laughing matter in the real world. Journalists would do exposes, police would conduct investigations, and Twitter users would post scathing threads.

And last but not least, let's not forget how utterly terrifying and creepy many Pokemon are. Psychic-types can see the future and read your mind, Ghost-Types can straight-up murder you, and so many look far too human for my liking. A lot of the more prankster oriented 'mons could get up to some really good tricks, so maybe we should be thankful they only exist in 1s and 0s.