There are a ton of really fun board games that can entertain groups of people. Whether it’s a family game night or a group of friends getting together to have some fun, board games are the way to go for a lot of people. There are board games based around just about everything, but one of the most popular board games is Trivial Pursuit.

Anyone who has looked in the game aisle for this game will know there are a ton of different editions. From Trivial Pursuit editions that are specific to a movie, TV show, or generation to high tech versions, there are a lot to choose from. How are you supposed to know which one to buy for your next game night?

Updated on September 22nd, 2020, by Richard Keller: Since its release in 1981, Trivial Pursuit has graced living room floors and kitchen tables across the globe. With a mix of easy and hard questions, it takes a while to get through every single one. Add to that a slew of different editions, and it can take players decades to finish them all. As proof, here are a few more editions of Trivial Pursuit ranked in terms of enjoyment. 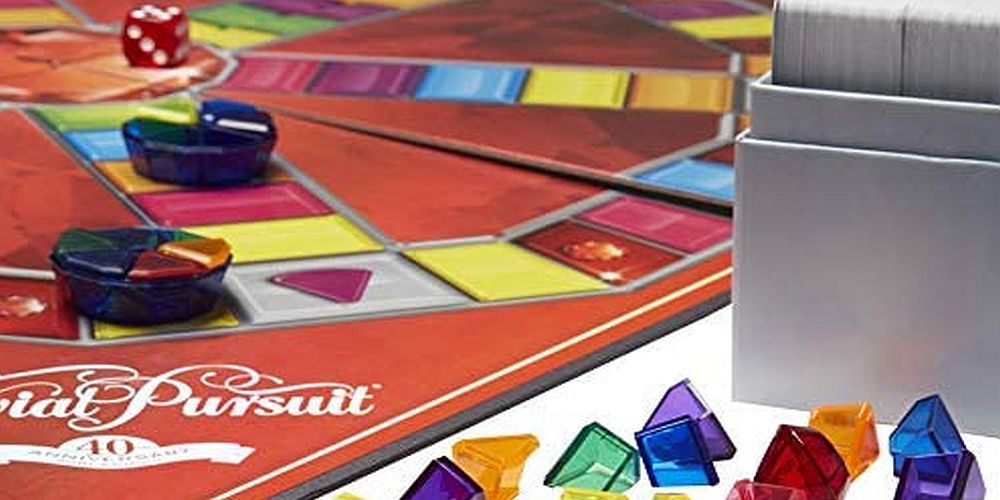 Released in 2018, this version of the game does more than give players its greatest hits. This is revealed with its ruby-colored game board and the higher-end components.

Of the 600 cards, 200 are part of a Ruby Deck. Within these are 1,200 “Remember When?” questions. These queries span the period from 1979 to the date of the game’s release. The Ruby Edition is a version for all generations to play. 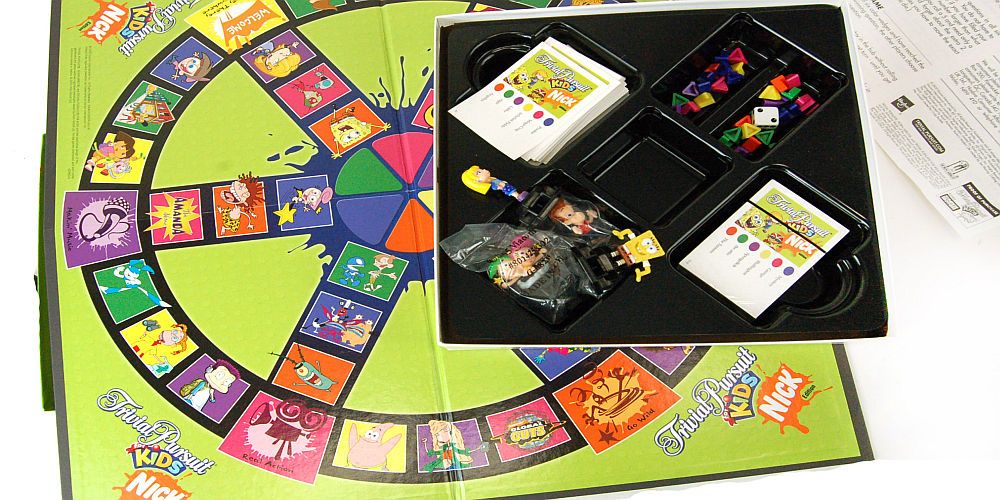 Players need knowledge of classic Nickelodeon shows to get through this version of Trivial Pursuit. Though the package says it’s for kids, any age can play. Especially those who enjoyed shows like Dora the Explorer, Rugrats, and SpongeBob SquarePants.

The only thing similar to the original version of the game is the wedges. The game board itself is filled with images of Nick Cartoon characters. The player pieces are versions of Jimmy Neutron, SpongeBob, and other figures. 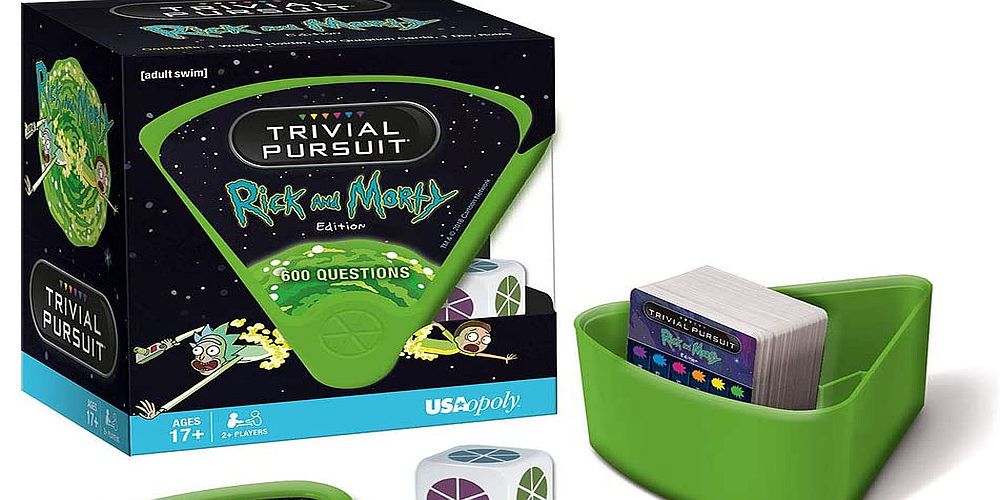 Even in the days of instant celebrity, people know they’ve become pop culture icons when they are given their own Trivial Pursuit edition. Case in point, the Adult Swim series Rick and Morty.

For players 17 and older, this edition has 600 questions based on items related to the series. It also has a Wubalubadubdub wild card category to mix things up for the players. 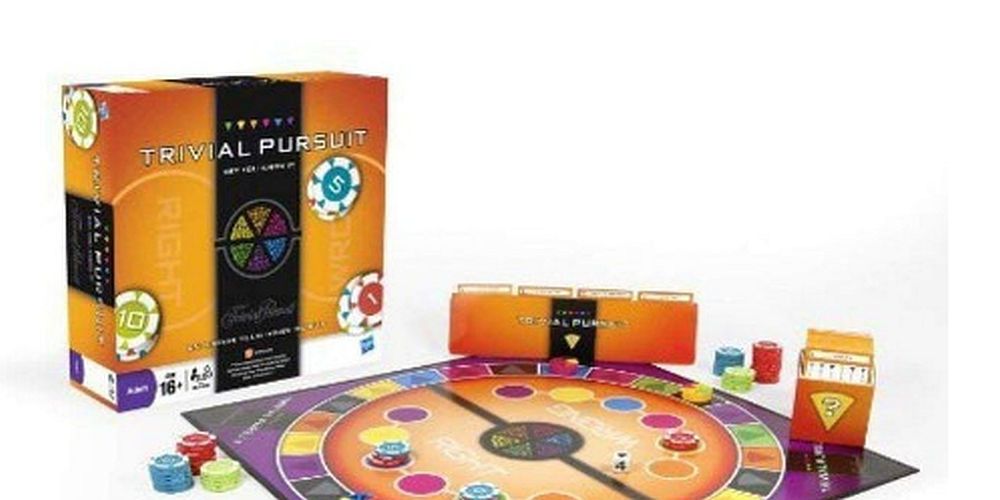 The twist to this version of the game is a player doesn’t need to know an answer. Instead, they bet on if their friends know the proper response to the question.

The Bet You Know It edition turns Trivial Pursuit into a true guessing game. A player wagers if another person knows an answer or not. Either way, what they win is converted to wedges that help them win the game. 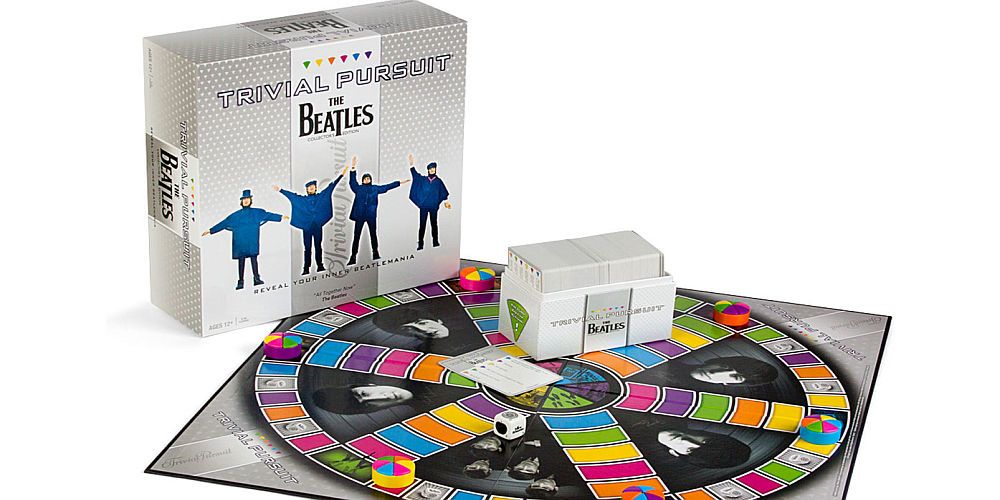 Fans of the Fab Four should be intrigued by this Trivial Pursuit edition. It features nearly three thousand questions about John, George, Paul, and Ringo. The range of difficulty depends on how well they know this iconic band.

The game board features photographs of the Beatles. Also, the cards are separated into individual holders that correspond to the game board categories. Not only is this Trivial Pursuit edition visually entertaining but it’s also a challenge for everyone. 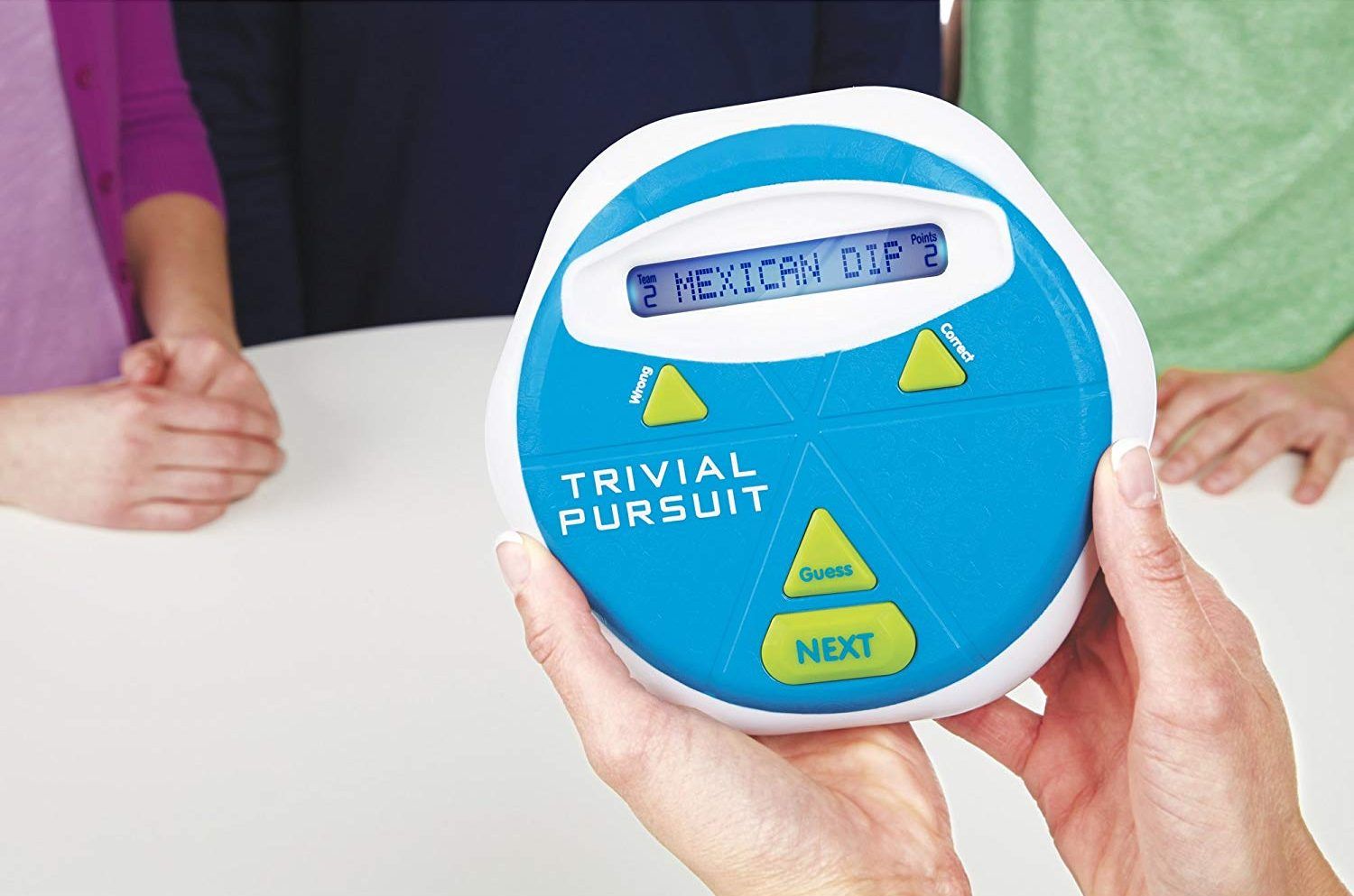 Most editions of Trivial Pursuit are basically the same thing, but with a few minor changes. These changes are typically to the actual questions that you’re going to be asked. They’ll either be general trivia or questions about your favorite movie or TV series. But Trivial Pursuit Hints is a version of the game that’s a little different.

This electronic, handheld game gives each team three hints toward the answer. The team has to use those hints to try to figure out what the word, phrase, or thing they’re supposed to be guessing is. But, each of the three hints they use will give the team fewer points if they score! This version is a unique and fun party game, but fans of Trivial Pursuit will probably prefer the classic board game-style games instead. 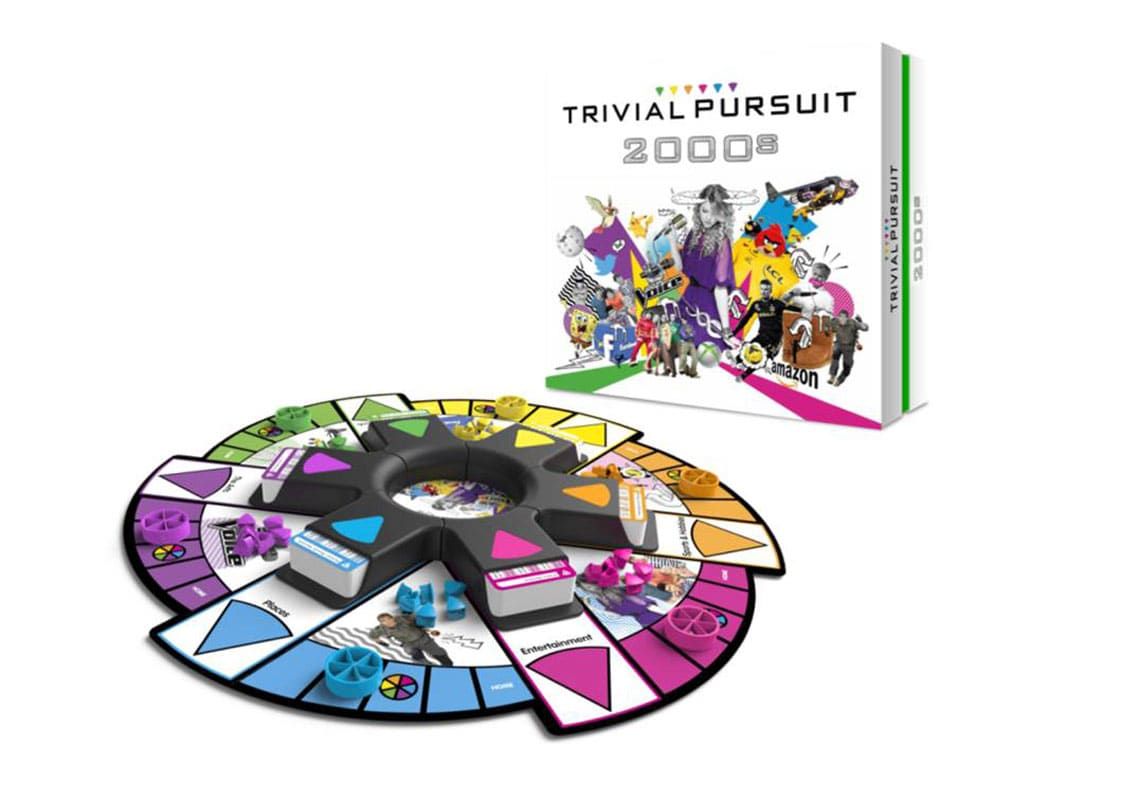 Time to take it back to the 2000s. This decade is one that gave us the iPhone and so many classic video games. No matter how old you were in this decade, you’ll definitely be able to have fun with a game of Trivial Pursuit based on it. The questions are all trivia questions that are specific to the 2000s, meaning that the range of knowledge is more narrow and current.

The board is really eye-catching and there have been some changes made to the classic Trivial Pursuit game with the release of this format. Although it can be fun for some people, there are also some players that say they made it way too easy and that the changes are just not as fun. The questions make this edition a ton of fun, but the format can be hit-or-miss for many players. 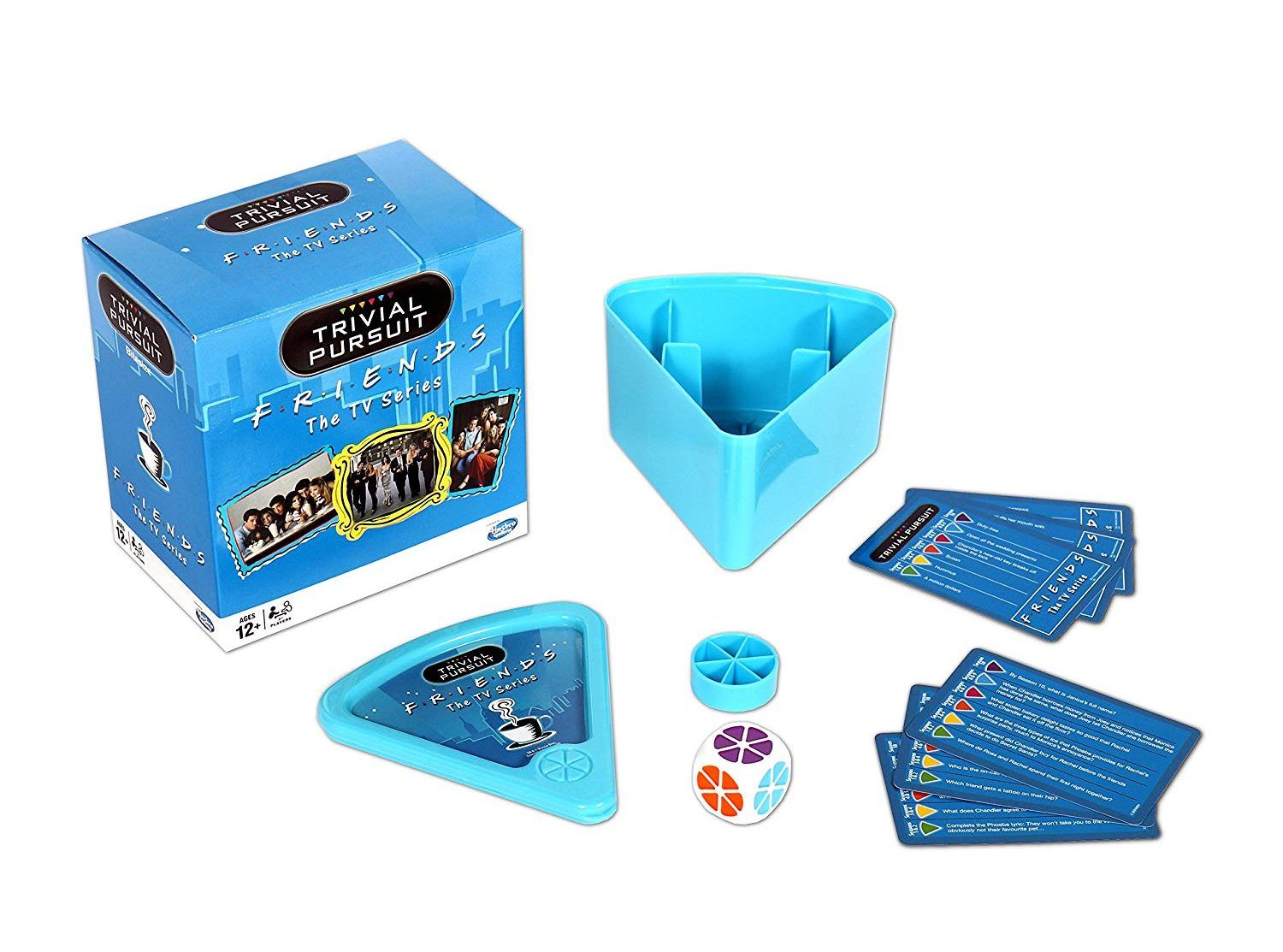 Any serious Friends fan that loses this game of Trivial Pursuit is definitely going to feel like they need to take “a break” from their friend group. This version of the game is based on Friends the TV show and is a fun way for fans of this show to test their knowledge.

Although some TV show or movie-specific versions of Trivial Pursuit can be totally awesome, the Friends version falls a little short. The main reason is the fact that it’s not actually a full game. It’s a stack of cards, a wedge holder, and a dice. No board or anything else. 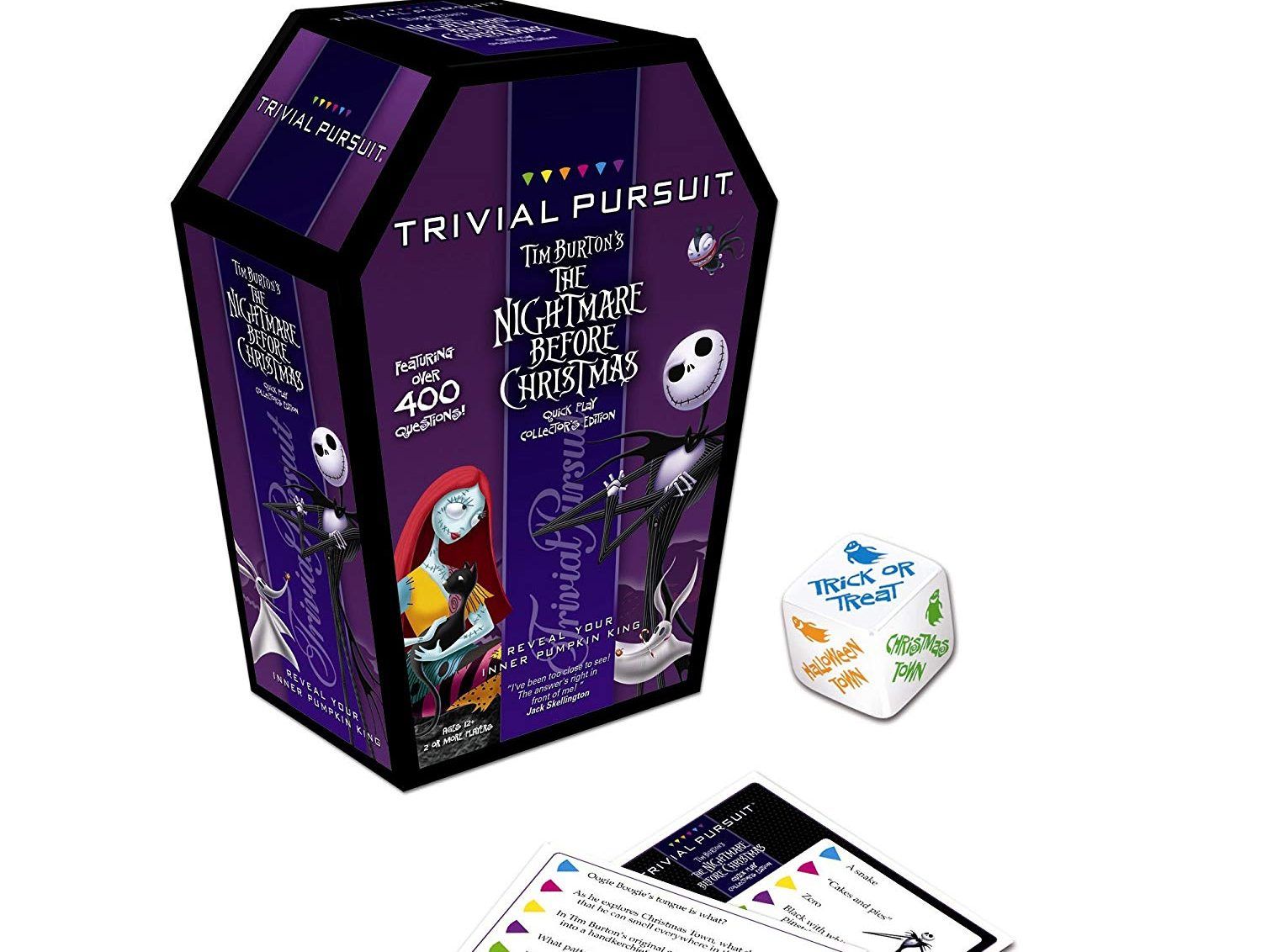 There are a lot of video games based on movies, but what about board games? While those are slightly less common, there are some super fun ones out there. Among them is Trivial Pursuit: Tim Burton’s The Nightmare Before Christmas. Whether you’re someone that watched this movie as a kid or only got into it as an adult, it’s hard to deny that this movie is a Halloween and Christmas staple.

This edition of Trivial Pursuit is similar to the Friends one in that it’s not actually a full game. It only comes with the question and the dice, but if you’re a major fan of this movie or a collector, it’s definitely a fun one to have around. Plus, it comes in an awesome coffin-shaped box. 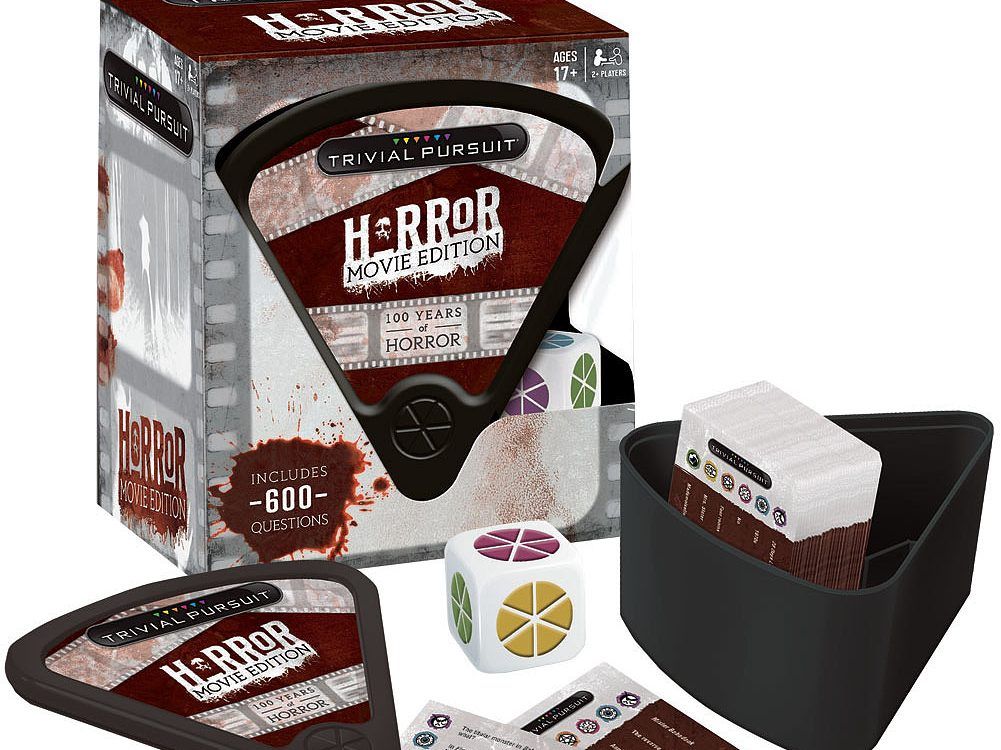 Forget about playing terrifying horror games, test your knowledge of horror movies instead by setting up a game of Trivial Pursuit: Horror Movie Edition. This game comes with 100 cards that have 600 questions that span across decades of horror movies.

If you think you know everything there is to know about horror movies, why not try to impress your friends with a game of Trivial Pursuit? This game is similar to the other mini versions of the game, like the Friends and Nightmare Before Christmas versions of the game in that it doesn’t come with a full board. 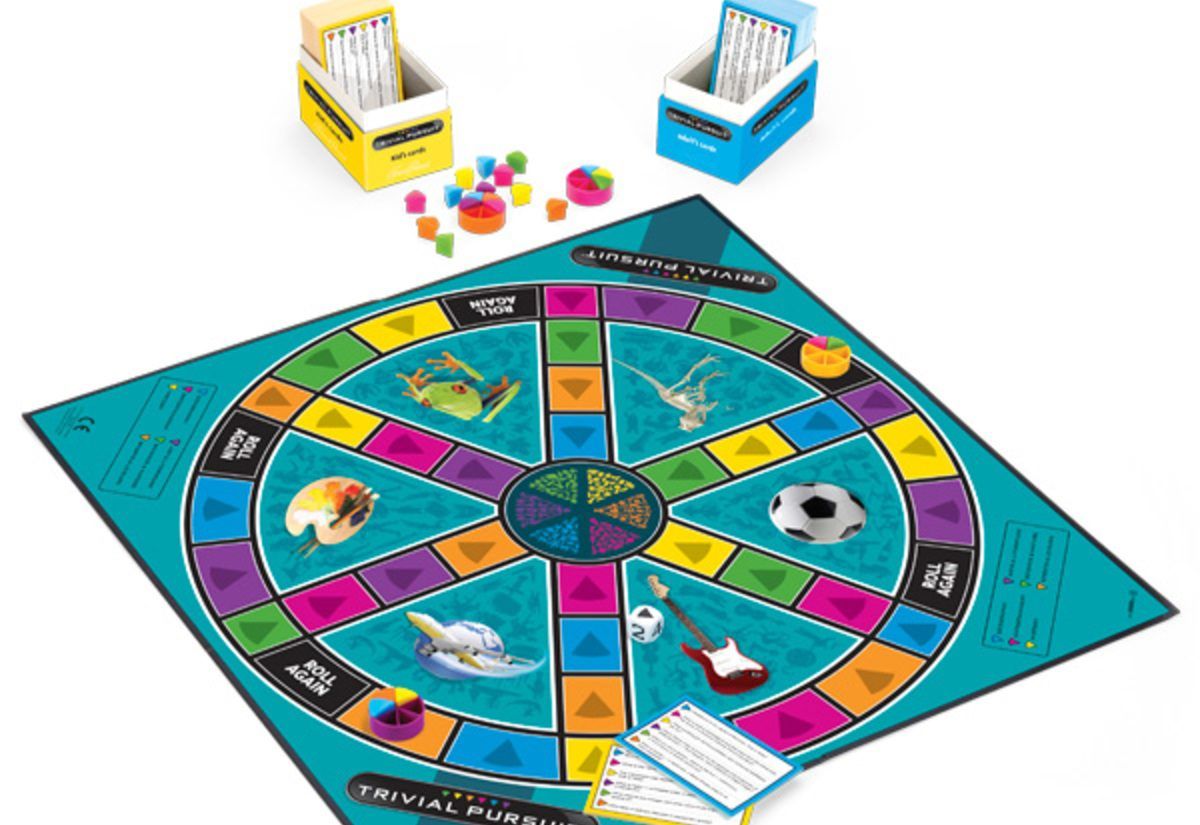 Trivial Pursuit Family Edition is a special edition of this board game that was designed to be fun for the whole family. Questions are divided up into cards for the kids and cards for the adults, meaning that there are two different difficulty levels. 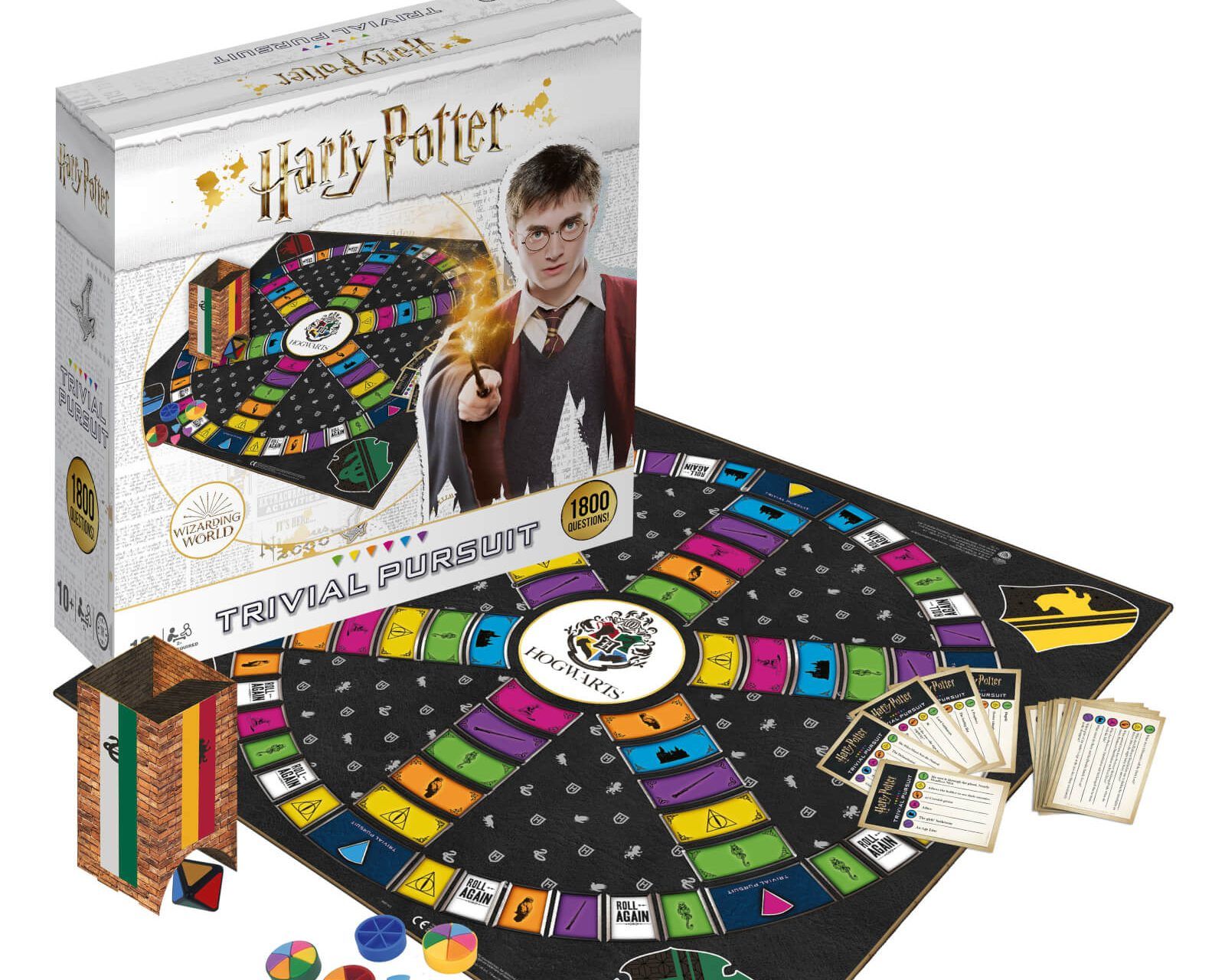 Still waiting for your Hogwarts letter? Unfortunately, we can’t help you with that. But if you and your friends are big enough fans of the Harry Potter series to get that, then you’d probably enjoy sitting down to test your wits with a Harry Potter-themed trivia question, right?

There are a lot of them out there, but Trivial Pursuit: Harry Potter Ultimate Edition has got to be the best one. This game has a total of 1800 questions that cover all eight movies in the series and will definitely be a challenge for even the most dedicated Potterheads. Unlike some other movie or show-specific editions of the game, this one comes with a full board. 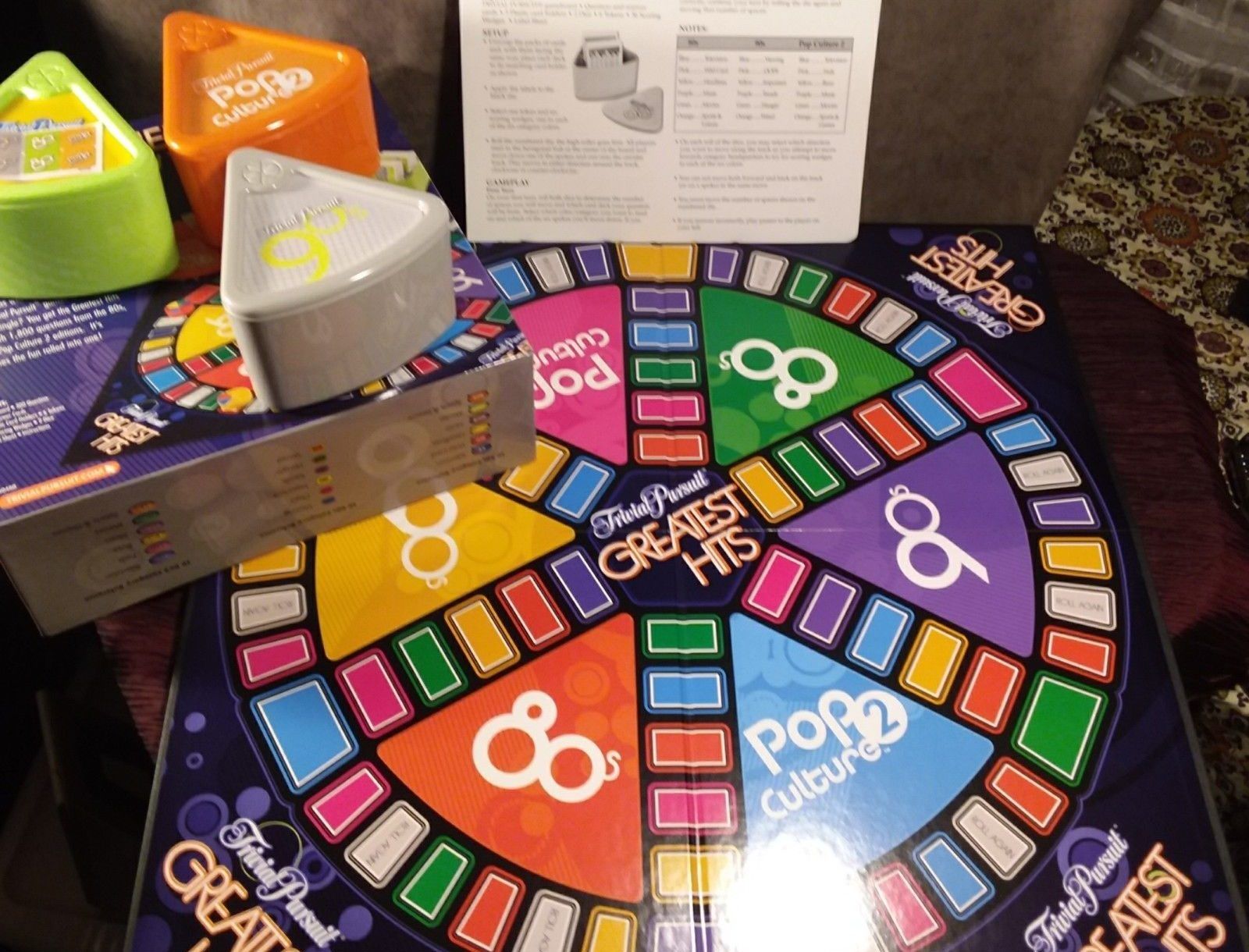 The main downside to this game that most reviewers pointed out is the fact that it is a combination of past Trivial Pursuit games. That means that all the cards and questions have come from past games. So, if you’ve already got a lot of editions of Trivial Pursuit in your collection, it may be best to skip this one. But if you want a ton of varied questions in one game, it’s a perfect fit. 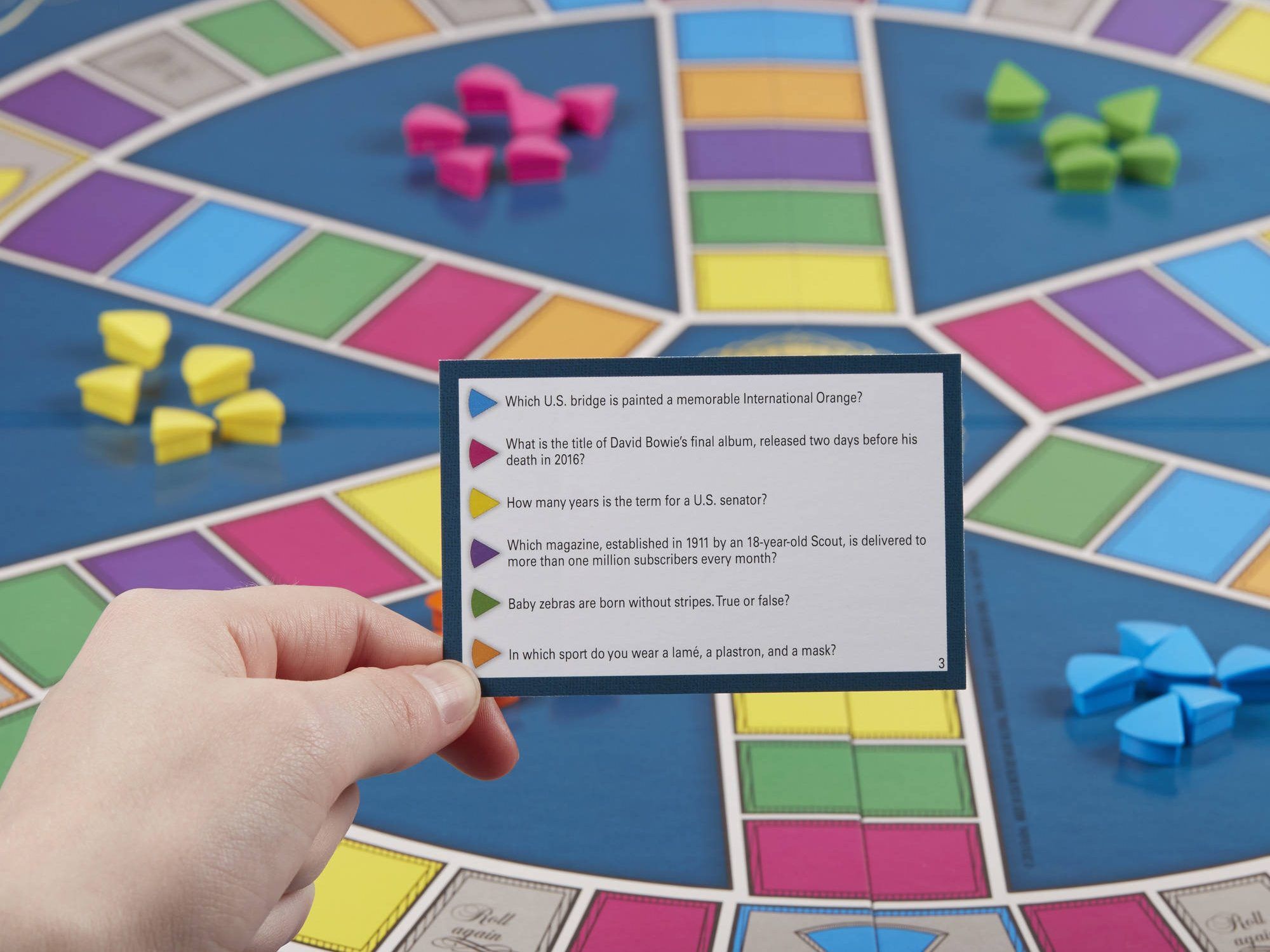 Why mess with the classics? While those other editions of Trivial Pursuit are fun for sure, one of the best and most reliable versions of the game is definitely just the classic edition.

If you’re not someone who’s super into a certain decade or fandom and you don’t have to worry about easier, more kid-friendly questions being in your stack of cards, then you can skip over all the specific editions of Trivial Pursuit and just pick up one of the classics instead. 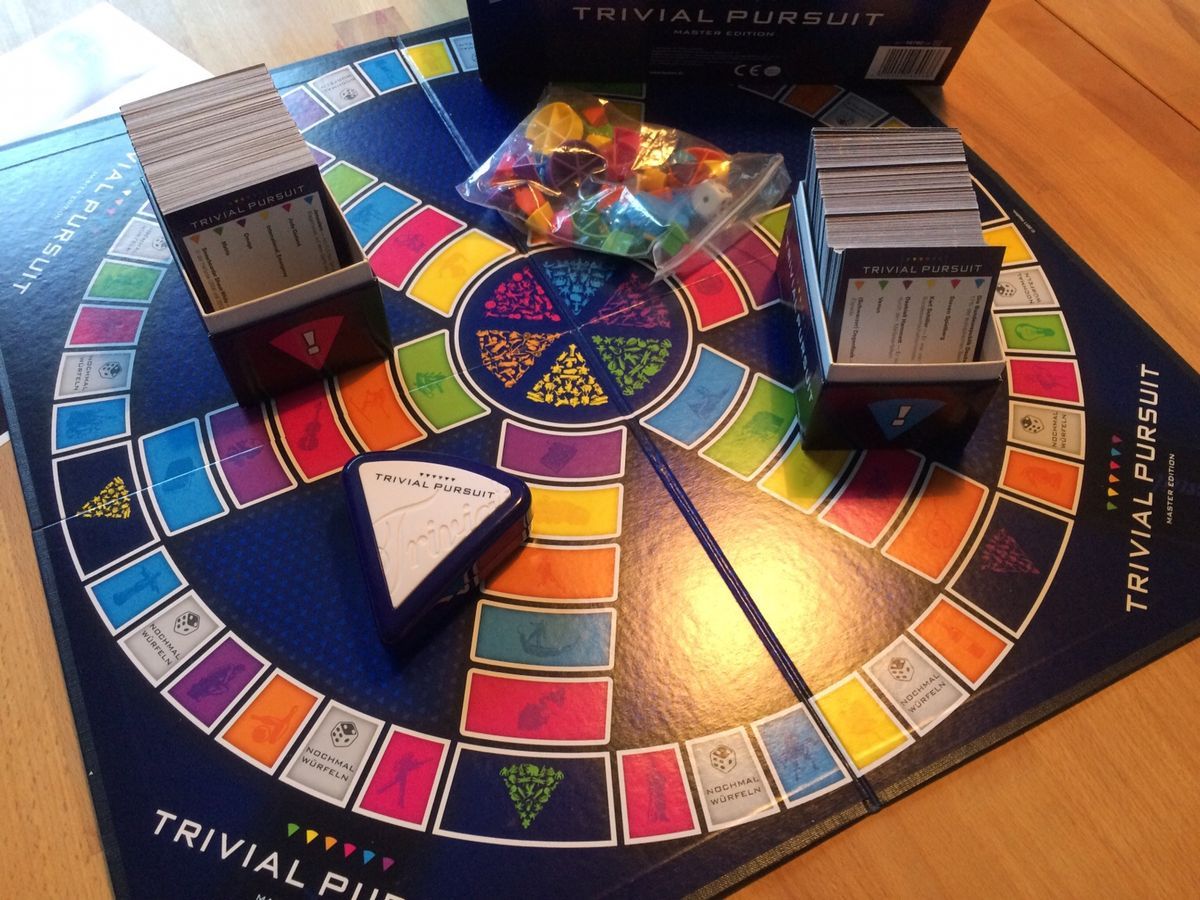 Trivial Pursuit: Master Edition is fairly similar to the classic version of the game. What’s so special about this version that it landed the #1 spot on this list? The fact that it simply took the classic game and expanded on it, rather than trying to change it up.

Along with the thousands of mind-boggling, head-scratching questions that the players will be asked to answer, this version of the game also has a twist. Some of the cards can have an image with a multiple-choice question on them, adding a fun challenge for everyone playing.