Rainway has launched its peer-to-peer game streaming iOS app, which uses cloud gaming to enable  PC games to run on iPods, iPhones, or iPads for free.

The cloud gaming market is getting crowded. Google has launched Stadia, and Sony has its PlayStation Now service. Blade’s Shadow is on the market for a monthly subscription fee. Microsoft is preparing Project xCloud, which is in preview right now. And other services are in the works.

But CEO Andrew Sampson, who once upon a time was homeless, believes he’s got the right price: free. All you have to do is download the Rainway app from the App Store, and you can stream games from services like Steam to your iOS devices. And this service doesn’t use the cloud, which would be very costly, as those other services are likely to find out. Rather, this service works peer-to-peer. It took Apple a while to approve the app, but it’s finally ready to go.

While free may be good for getting attention, Rainway still has to figure out how to use money. Rainway has also launched its Android app. When you launch a game via Rainway, it’s running on your gaming PC at home. Rainway captures the screen in real time and encodes it to a stream. That stream is then sent using low-latency networking to the connected device, which renders the images. So it isn’t cloud gaming, but it is game streaming and the streams are peer-to-peer. In other words, no expensive data centers choked and died to bring you the game.

“No data goes through our servers and it’s with this approach that we get ultra low-latency streaming because our technology can optimize for the users network, rather than trying to be one size fits all solution,” Sampson said. “All of this means end users can stream games from their PC inside their home or out on the go, and they don’t need to repurchase any games. Our streaming technology is also compatible with AMD, Intel, and Nvidia hardware so it works out of the box for all PC games.” 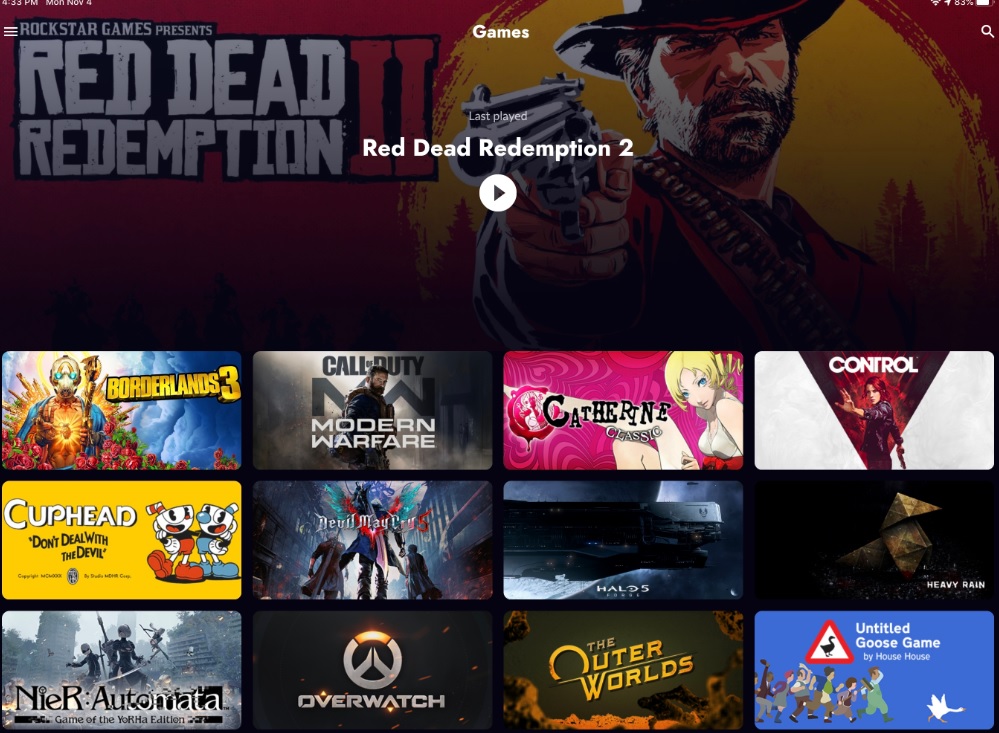 Above: You can choose what games you’ll play on mobile with Rainway.

Before 2016, the founders Sampson and Evan Banyash were living near Atlanta, building a remote desktop administration service. Then they pivoted away from that because they found everyone was using the service to play video games inside a web browser. So they started working on an all-in-one gaming service.

The Techstars accelerator program accepted Rainway in early 2018, and last year this Seattle-based startup raised $5.2 million from institutional investors such as Madrona Venture Group and also angels and firms such as GoAhead Ventures. Its beta test drew more than 36,000 users in the first couple of months, and it launched a 1.0 product in February that ran games on a web browser, even if the game wasn’t installed on the machine they were playing on.

“We started to see a lot of validation for the product we were building,” Sampson said. “We believe if you own a game on Steam or the Epic Games Store or Uplay, you should be able to play it across all your favorite screens.”

This is all pretty heady stuff for Sampson, who grew up near Atlanta. He dropped out of high school when he was 14. During his freshman year, he was homeless. He bounced around, finding places to stay with his sister, her kid, and his father.

“I grew up pretty poor,” Sampson said. “I made the conscious choice to drop out and start building my skills.”

He went into computer programming, and he picked it up with his friends. Sampson found a calling in backend services, including something called Borderless Gaming. He sold an app called Netflix Roulette (which let Netflix pick a movie for you) and sold that to another company last year. He also worked on a couple of video games.

“My skin is very thick,” Sampson said. “Gaming is a big part of who I am as a person. When I was able to see an opportunity to build a gaming startup and also work on a really hard technology. That excited me and gets me out of bed in the morning. That, and my team. My team is absolutely amazing.”

While others may see a free-for-all, Sampson sees tiers in the cloud gaming market. The top-tier are services like Stadia, which are spending money to get exclusive games or just big-budget games. They manage the services and you pay a subscription to get access to a game. There are services like Shadow, where you pay a higher subscription price to get access to a graphics processing unit (GPU) in the cloud, as if you were renting a high-end gaming computer.

And then there is Rainway, which is focusing on PC gamers and the games that they already own. This service gives them the freedom to play those games across other screens.

“It’s completely peer-to-peer so all the streaming happens from the user’s PC to their other device,” Sampson said. “We have optimized the experience a lot. You can use your fingers like mouse input. You can use any gamepad you have. We want it to be really seamless. It takes 30 seconds to get set up when you download the app. Your games load when you are authenticated. You tap on what you want to play.” 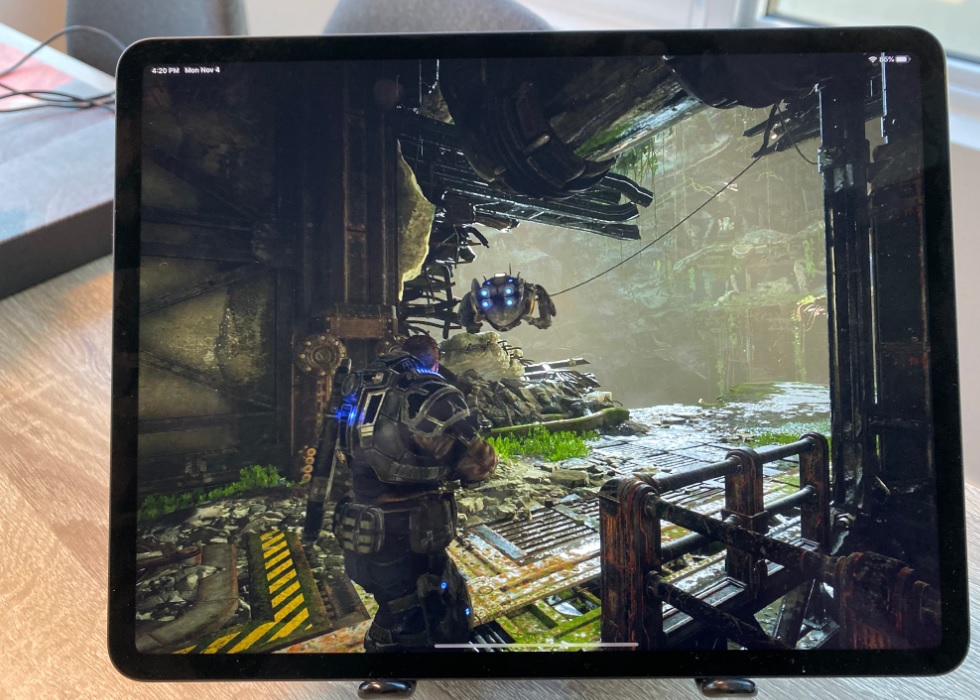 Above: Gears of War 5 on an iPad? How is that possible?

The scary thing, well, maybe just for me, is that Rainway doesn’t currently make money. If the service gets popular, that could become costly.

“Currently, we don’t have any route for monetization at this time,” Sampson said. “Our plan is to continue to focus on building new products and features that enhance the core service because we want to build something that is a bit more feature-complete before we go out and ask users to pay for anything.”

Oh, well. I suppose Facebook did the same thing, going for the users first. Since introducing their first product in 2018, Rainway’s users have logged millions of hours of gameplay on the service and mobile access has been one of the most requested features.

“My rationale now is that if we can continue expanding the service, and allowing people to really enjoy playing their games in all the different fascinating ways that we’re creating, that is more valuable than making a quick buck right now,” Sampson said.

The investors were OK with that plan.

“We love the Rainway product because gamers want access to the games they already have — not another subscription with a limited library of games,” said Daniel Li, principal at Madrona Ventures, in an email. “In a world where consumers are inundated with subscriptions, we believe gamers who have invested thousands of dollars in their game libraries should be able to play them on any device. Rainway has already captured the attention of hundreds of thousands of users, and we are excited to support them in their next phase of growth.”

Rainway for iOS is simple to use and brings PC games to mobile devices with features such as simple password-free login. You just hold your device near your Windows 10-based Rainway Dashboard and you’re connected instantly to your game library.

It has a user interface that allows you to press a button and play a game. And it has PC-optimized input options with touch controls, a custom on-screen keyboard, and an on-screen gamepad.
Rainway for iOS allows you to access and play all the PC games you own from Steam, Epic Games, Xbox Gamepass, and 20 other digital game services on your iOS device.

You can use Xbox, DualShock, or touch controls and that input is sent back to your gaming PC with. Now able to play games like Red Dead Redemption 2, Untitled Goose Game, or The Outer Worlds on an iPod, iPhone, and iPad — and it plays as if it’s native.

How the tech works 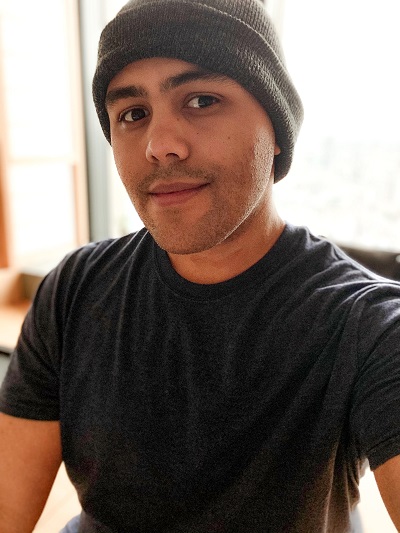 Above: Andrew Sampson is the CEO of Rainway.

“Rainway works in three components,” Sampson said. “We built this really fast Pulsar game streaming engine. It is a fast, cross-platform video pipeline that lets us capture and encode gameplay into video as quickly as possible. It is built on low-level APIs like Vulkan. We have unique features like running a game on a GTX 1080 and encoding it on Intel integrated GPU.”

He added, “What that gets you is versatility and we can encode it in 2 milliseconds. There is virtually no overhead. We have a really fast networking protocol that can send data over the most unreliable networks. Even if you are playing on 4G LTE on mobile, we should be able to guarantee you a smooth stream. The third component is rendering. It is a single code base that is cross-platform and it allows us to do low-latency video rendering on things like an iPhone or Android device or Xbox or Windows desktop.”

Rainway also supports all controllers on iOS 13 such as the PlayStation DualShock and Xbox One controllers. On the iPad Pro, Rainway said you can play your PC games at up to 120 frames per second.

The company has 17 people, and it is hiring. That’s a lot fewer people than Microsoft or Google. But Sampson said, “Cloud gaming people like Microsoft and Google are going to fight. They’re going to go to the mat. And that’s going to be a really interesting thing to watch unfold. But for us, we get to navigate the market without worrying about them. Everything we do is intended to shake up the game industry.”