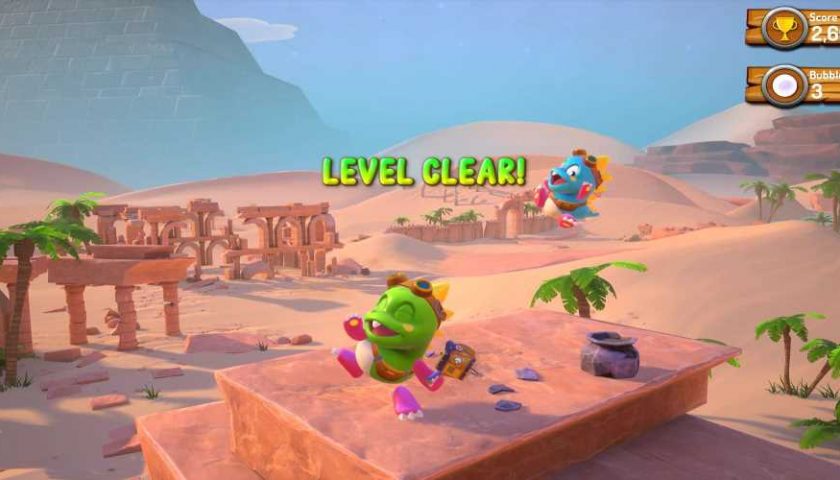 This fresh iteration features stunning visuals and classic gameplay with an innovative twist. However, new problems come with a new dimensional plane, and tricky levels may turn your dream vacation into a puzzle nightmare! Luckily, we already have an itinerary ready for you with tips and tricks to assist your bubble-busting adventures.

Always Aim Near The Bubble Core 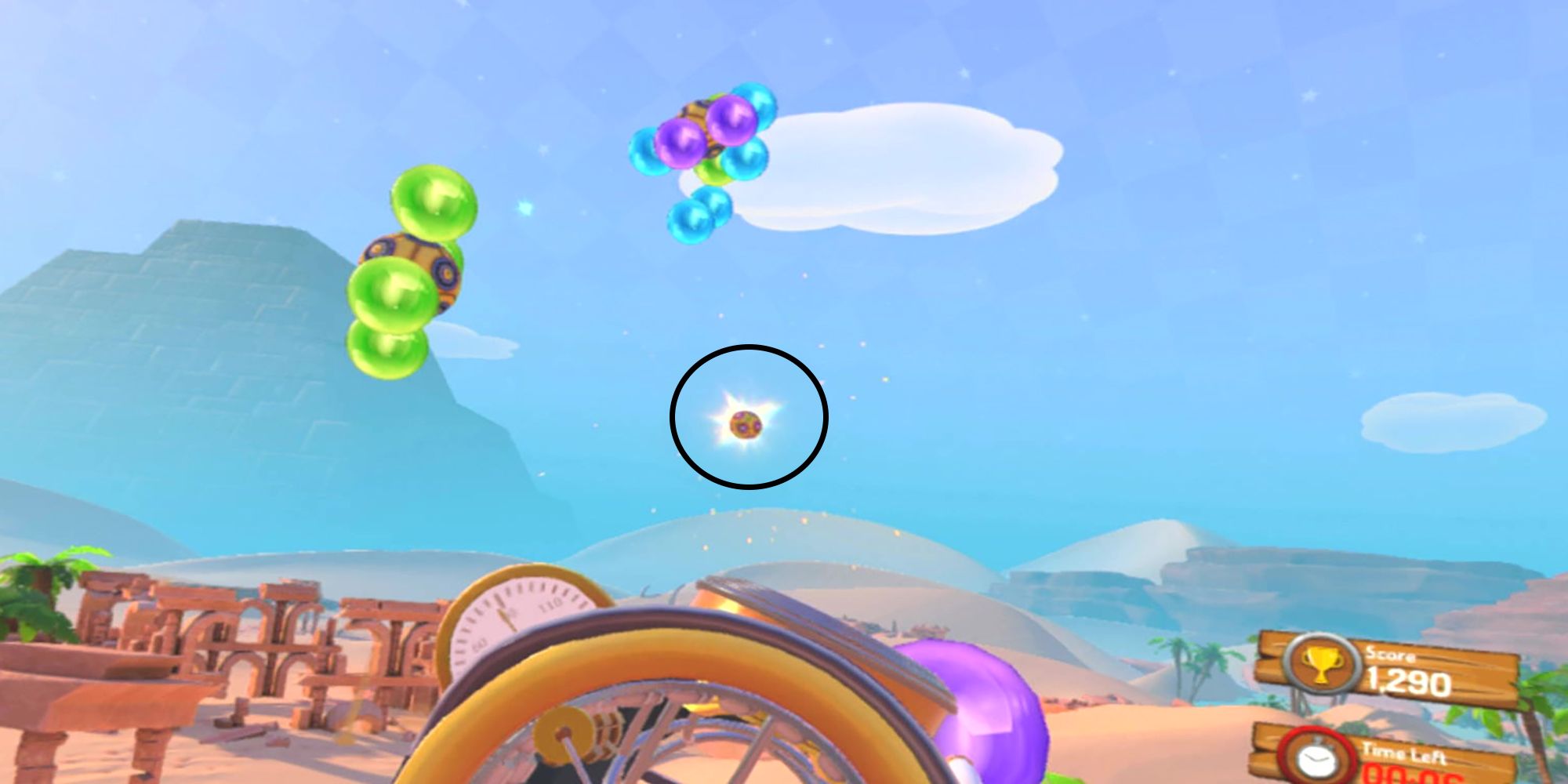 In most cases, your goal in Puzzle Bobble 3D will be to burst the bubble core(s) of the level. These are mechanical-looking orbs vested in the center of a bubble cluster. Once only a single bubble is in contact with the core, you can burst it. Therefore, on most levels, bursting every bubble is not your concern.

In turn, when you burst a group of bubbles, any bubbles that get disconnected from the rest of the cluster will float away. Therefore, the closer the busted bubbles are to the center, the more bubbles you can detach from the cluster. That's why aiming near the core is a wise move. Targetting the center of a bubble cluster is much more efficient, saving you time and shots.

Once the bubble core is ready to pop, it will glow. When this happens, disregard the bubbles still attached to it. As long as only one bubble directly touches the core, you can pop it and finish the puzzle. 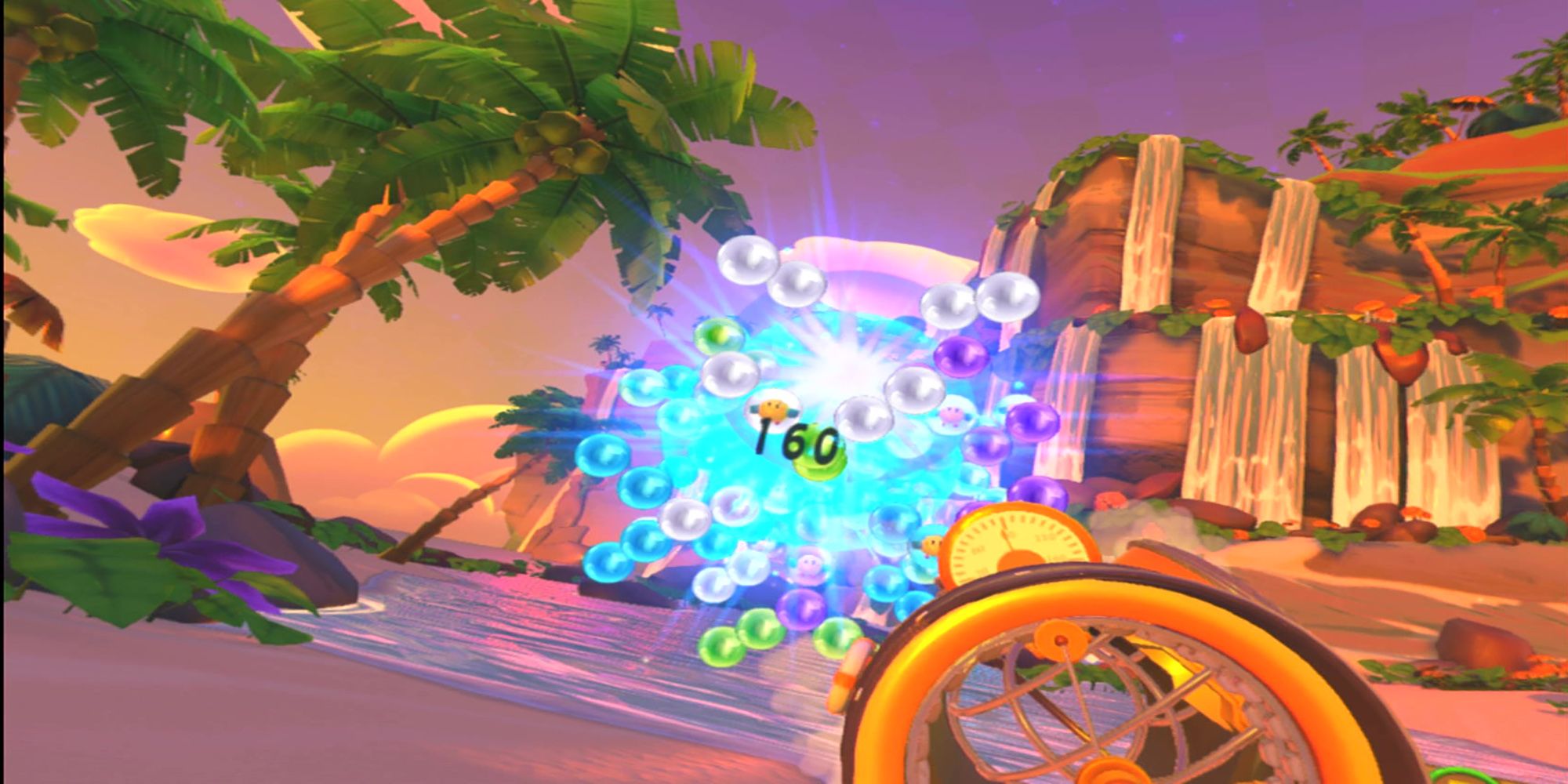 Physics plays a more prominent role in Puzzle Bobble 3D than its predecessors in the series. This is especially true when it comes to cluster movement. When a bubble hits a cluster, the cluster turns and shifts depending on the force of your shot.

Cluster movement adds another element of strategy to Puzzle Bobble 3D. You'll have to consider how a shot you make will subsequently affect the shots available to you in the future. For example, you may have a clear bursting shot right in front of you. However, if the shot moves the cluster in a way that makes other important shots less accessible, is it worth it?

You can also use Puzzle Bobble 3D's physics in your favor. For instance, if there is a vital bubble that you can't reach, maybe hitting its cluster from a certain angle will make it more accessible.

Remember That You Can Also Pop Bubbles From Behind 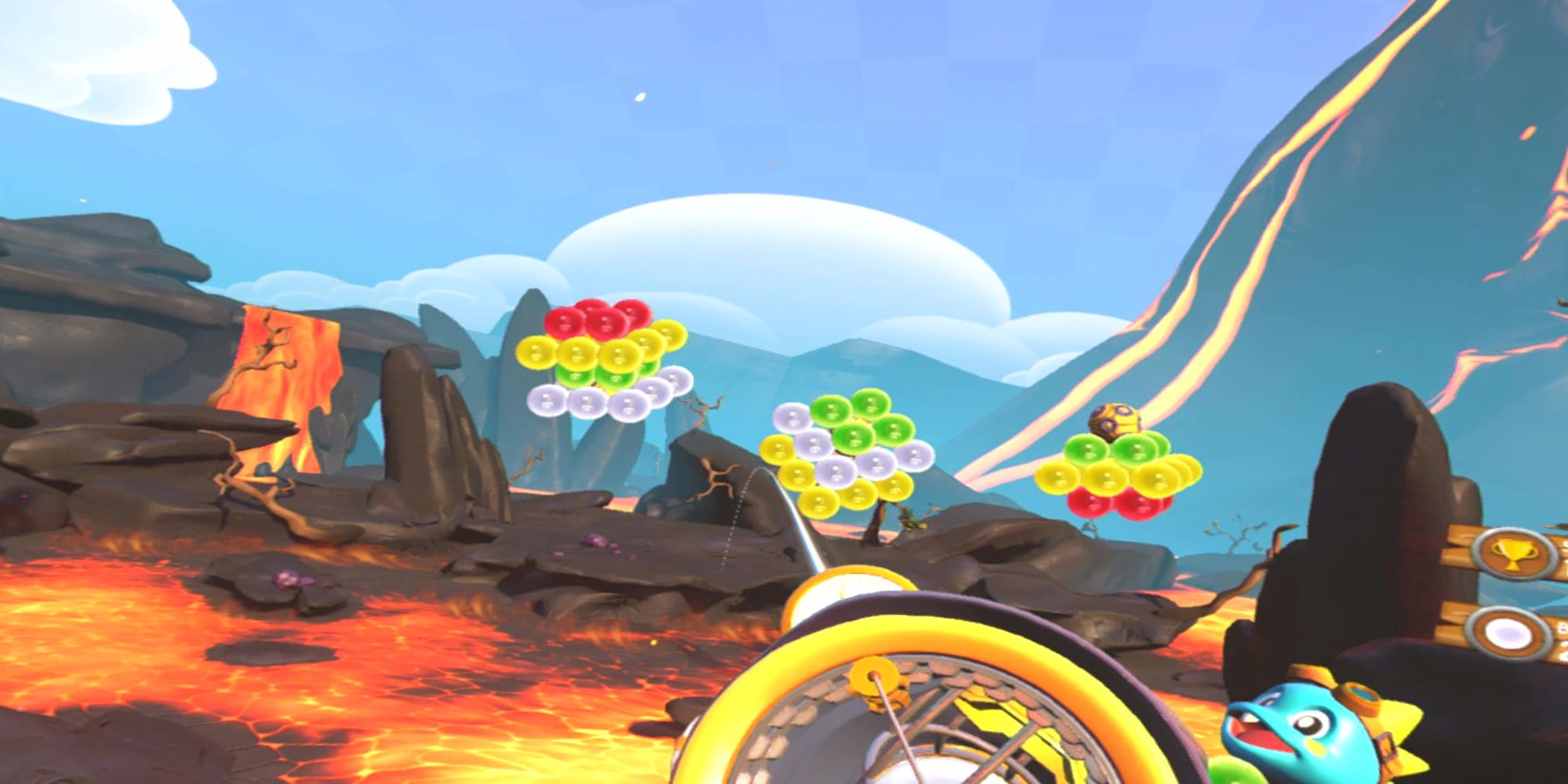 Sometimes you will find yourself in a position where the only bubbles you can pop are facing away from you. Luckily, you can work your way around that. Aiming bubbles away from a cluster, either to the sides, below, or above, will whip it around. Shooting from behind is an advanced strategy and requires some thorough estimations on your part. However, if you can find the proper angle and force of your shot, you'll significantly improve your game.

You Cannot Bounce Bubbles Out Of The Playfield 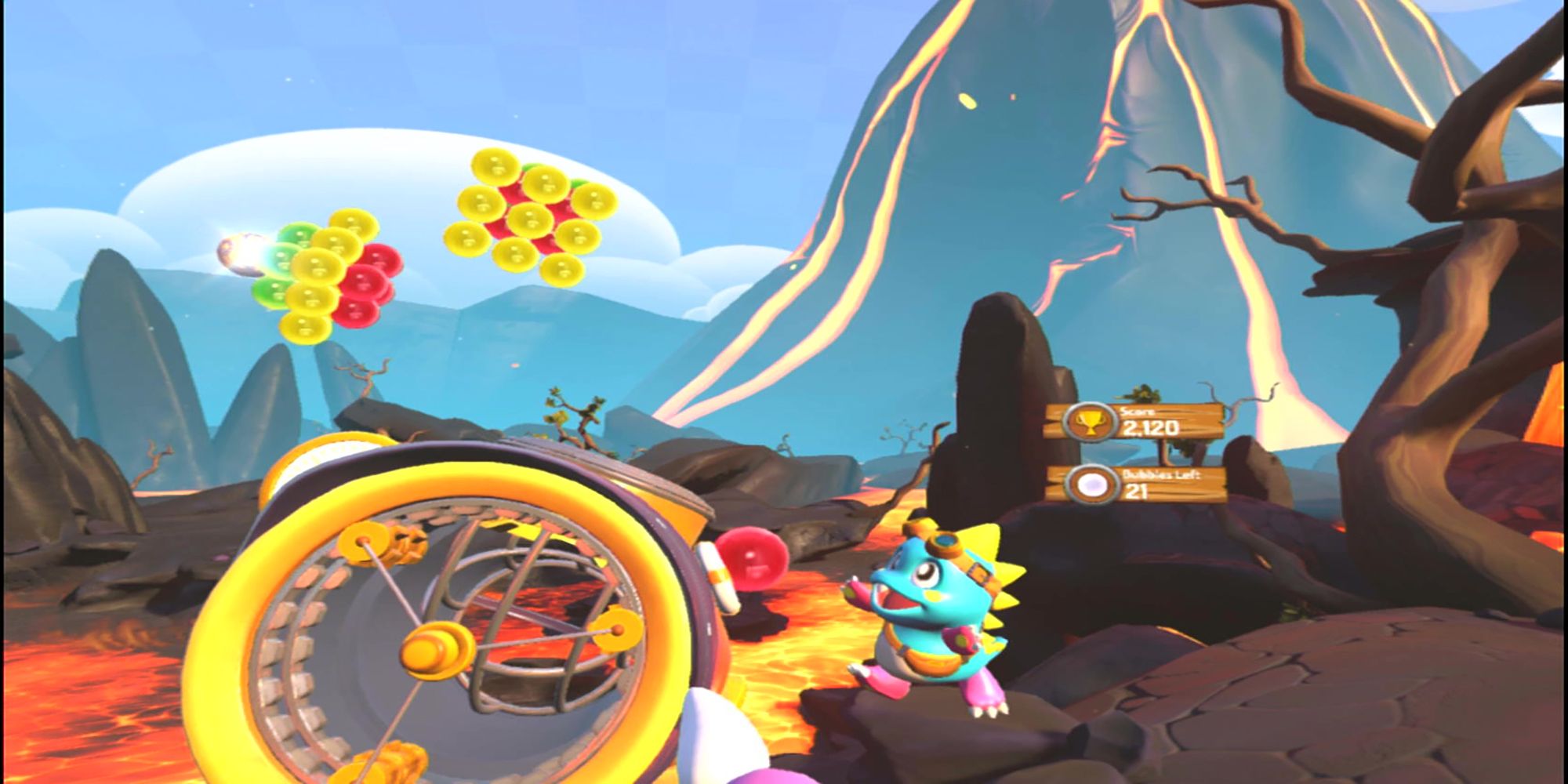 If you've played the games from the classic Puzzle Bobble series, you likely relied a lot on ricocheting bubbles to achieve your goals. This tactic was beneficial because you could also bounce a bubble you didn't need off the ceiling and out of the playfield. However, while you can bounce bubbles off the floor and onto a background bubble in this new iteration, you cannot rebound bubbles out of the playfield.

In other words, every bubble counts. So rather than waste your shot because you did not get the bubble you wanted, consider these options instead. You could:

These are only a few ideas, but you must think through whatever shot you make. Neglecting to do so will only cause headaches later on.

When In Doubt, Grind For Power-Ups 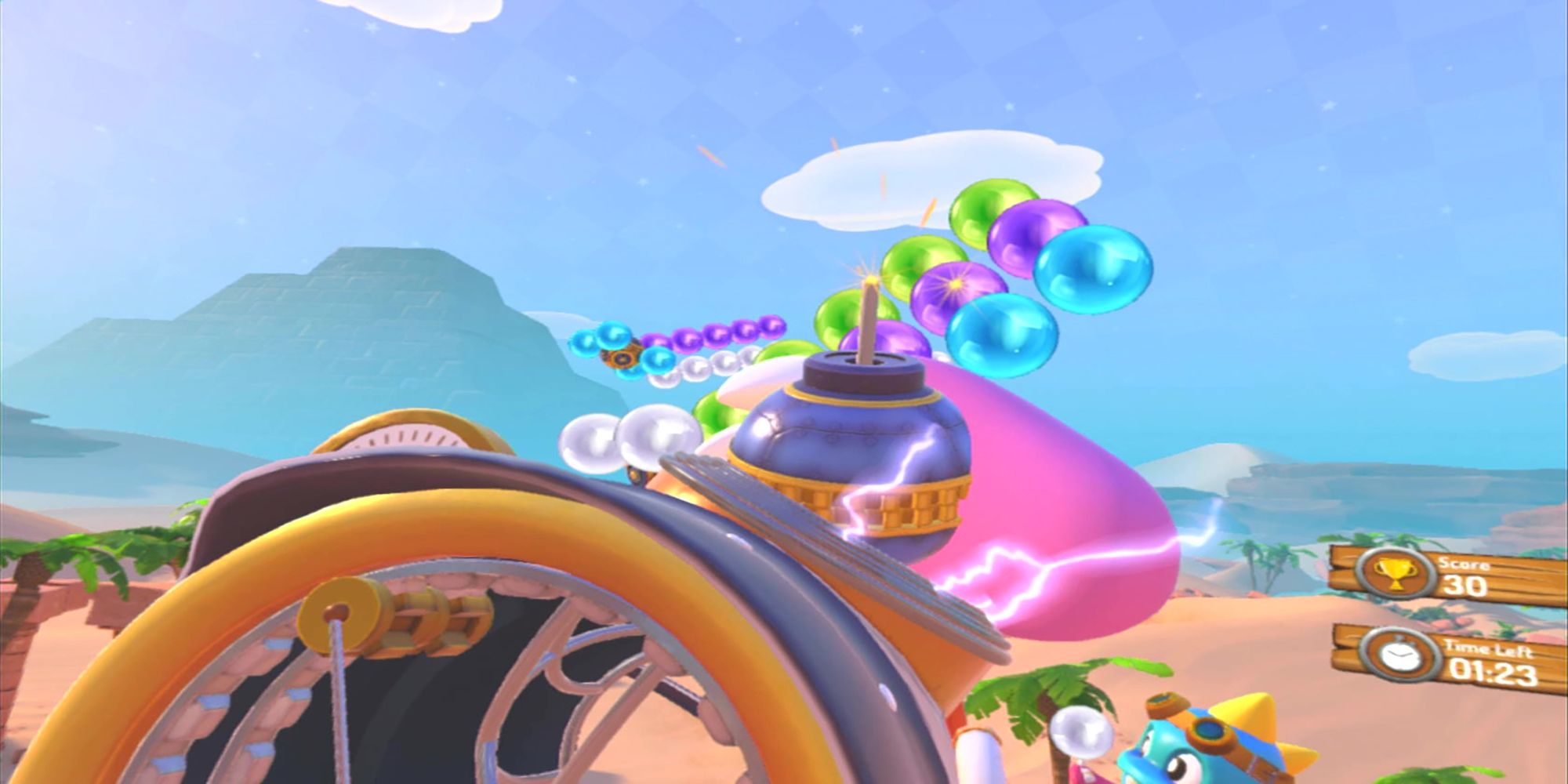 There's a steeper learning curve in Puzzle Bobble 3D than its earlier 2D counterparts. For instance, time limits and bubble limits were never an issue in past solo puzzles. Furthermore, you get no dotted line to help when you fail a stage. So, it's likely you will get stuck on certain levels. But, before you scream at Bub and Bob (who are trying their best, dangit!) and rage quit, take a breath and go back to earlier stages.

Why replay earlier stages, you may ask? Because you can rack up your coins to buy power-ups. We recommend playing early, more manageable levels for quick coins. Furthermore, if there are some more challenging levels with a higher payout that you know how to three-star with ease, revisit those as well.

The paywall for power-ups is higher than the cost to restock them, so make unlocking power-ups a priority early on in your story mode journey so you can easily purchase them later.

Hit The Pelicans That Pass By For Bonus Coins 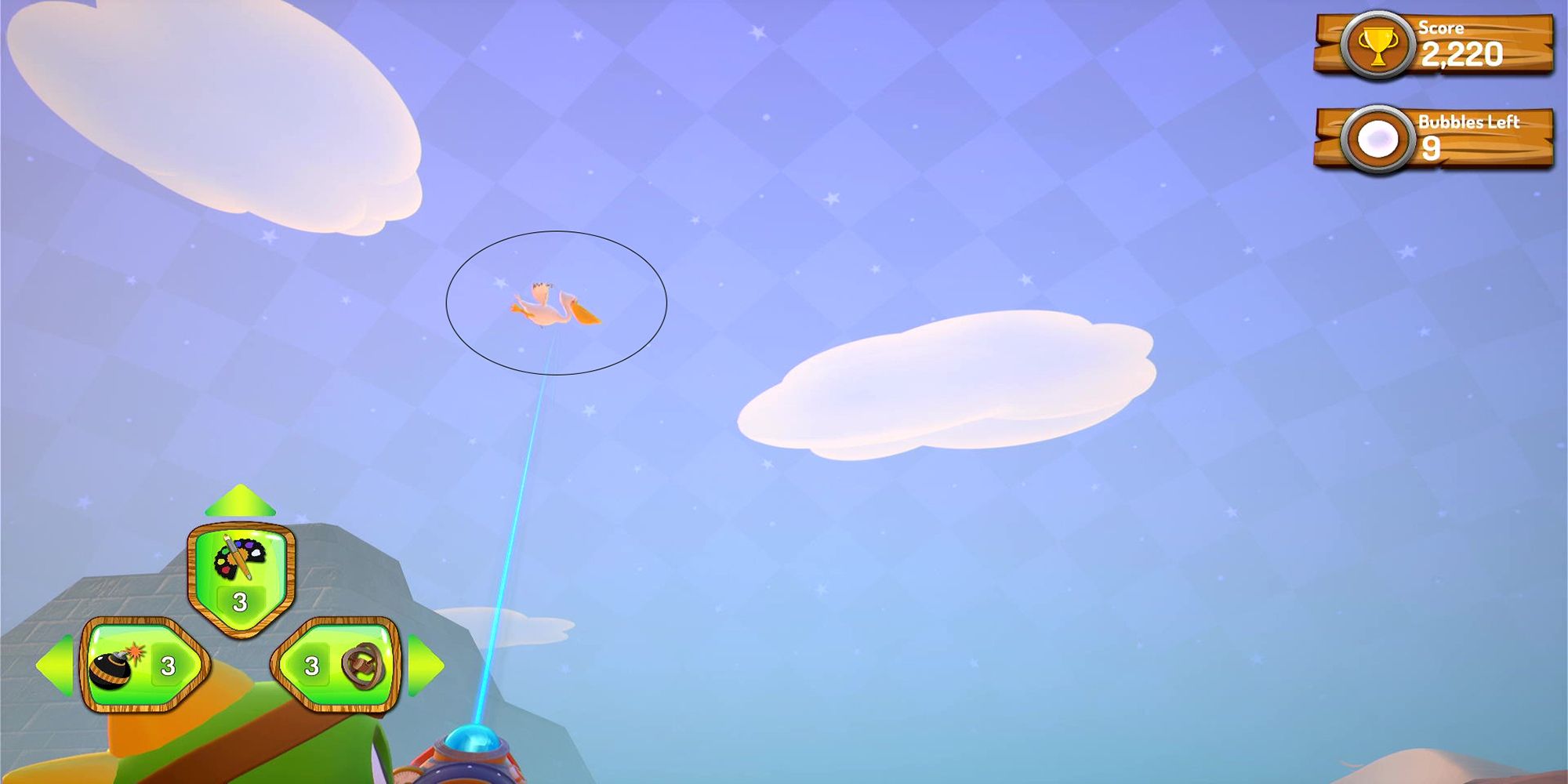 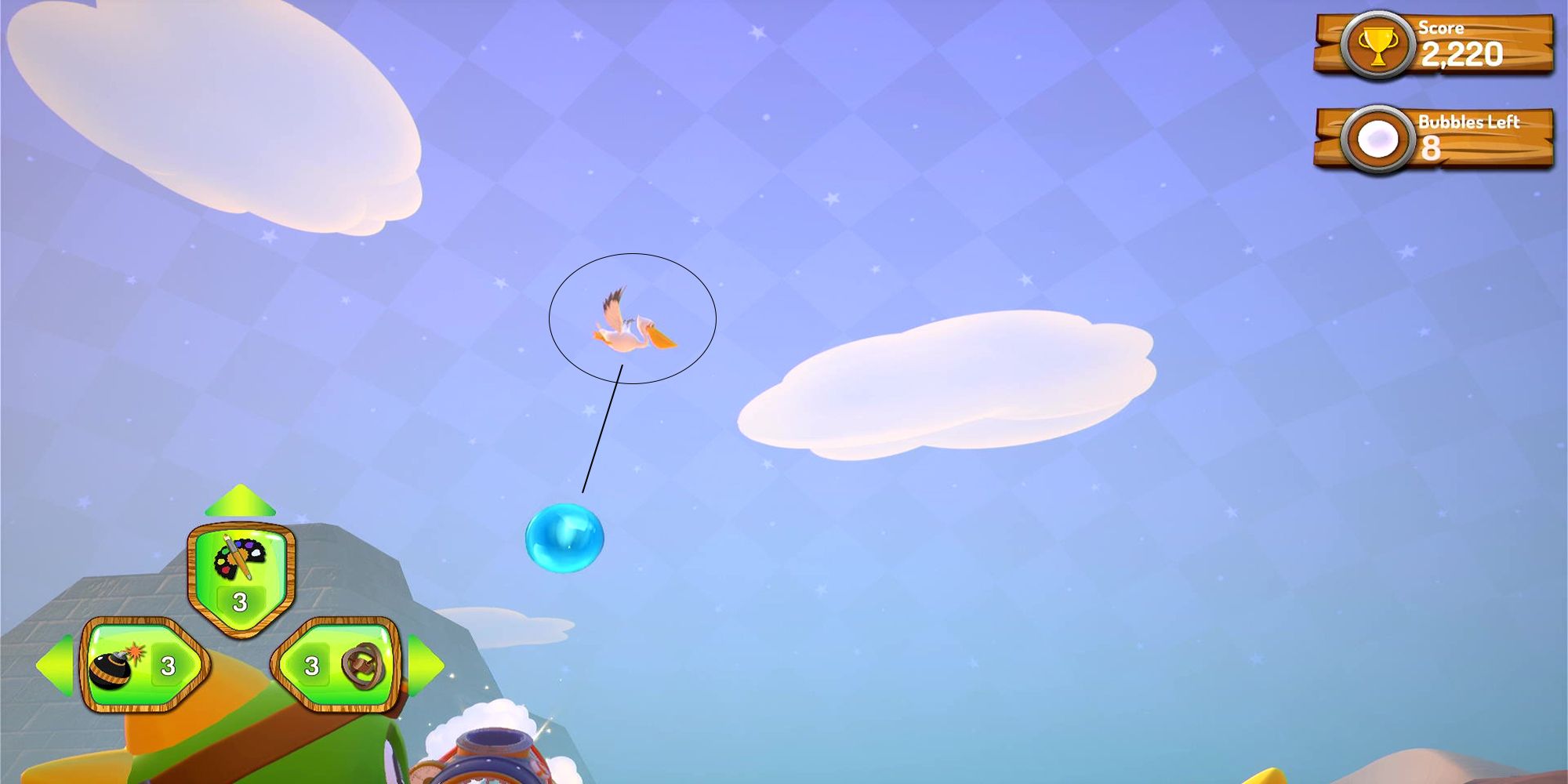 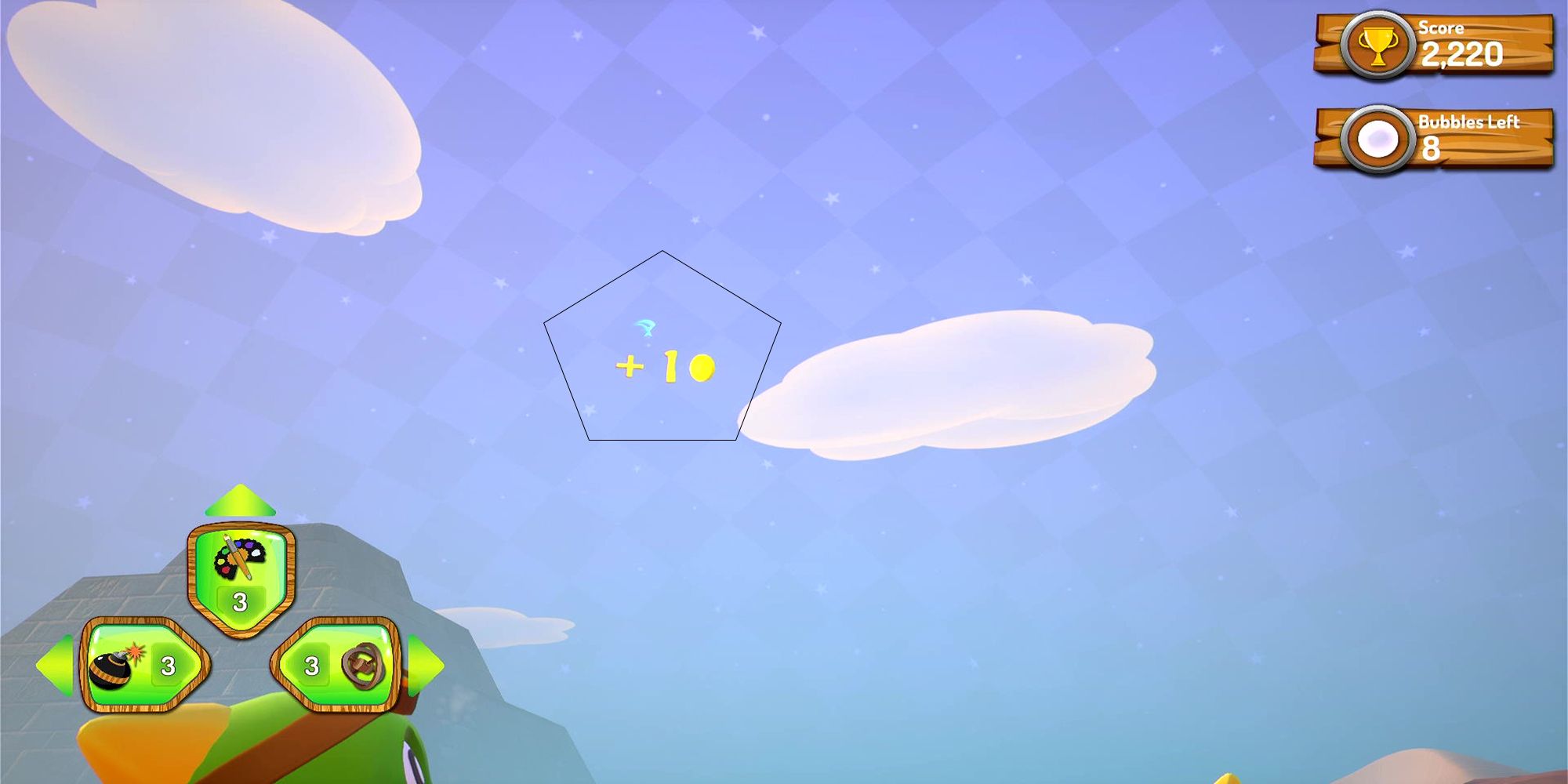 Replaying story mode stages repeatedly while grinding for coins can feel grueling. So, what can you do to get the most out of your playthroughs? One obvious answer is earning three stars on every stage you play. However, this becomes tougher to do at more complicated stages.

Luckily, there's a fun little easter egg in Puzzle Bobble 3D that will help you along in your grinding. Once in a while, you'll hear a ping, and a pelican will fly across the screen. If you hit it, the game rewards you a bonus coin. These moments can happen relatively quickly, so keep your eyes and ears peeled and don't get too precious with your aim. Since your bubbles automatically target the closest object on the field, aiming in the pelican's general direction should be fine. Still, it's essential to keep your aim far enough away from the bubble clusters to avoid hitting those instead of the pelican.

Furthermore, if you are in a bind and can't afford to waste a bubble on a pelican, try to aim away from it when it passes by. Otherwise, the bubble may lock on the pelican instead, and you'll lose a vital bubble-bursting shot. 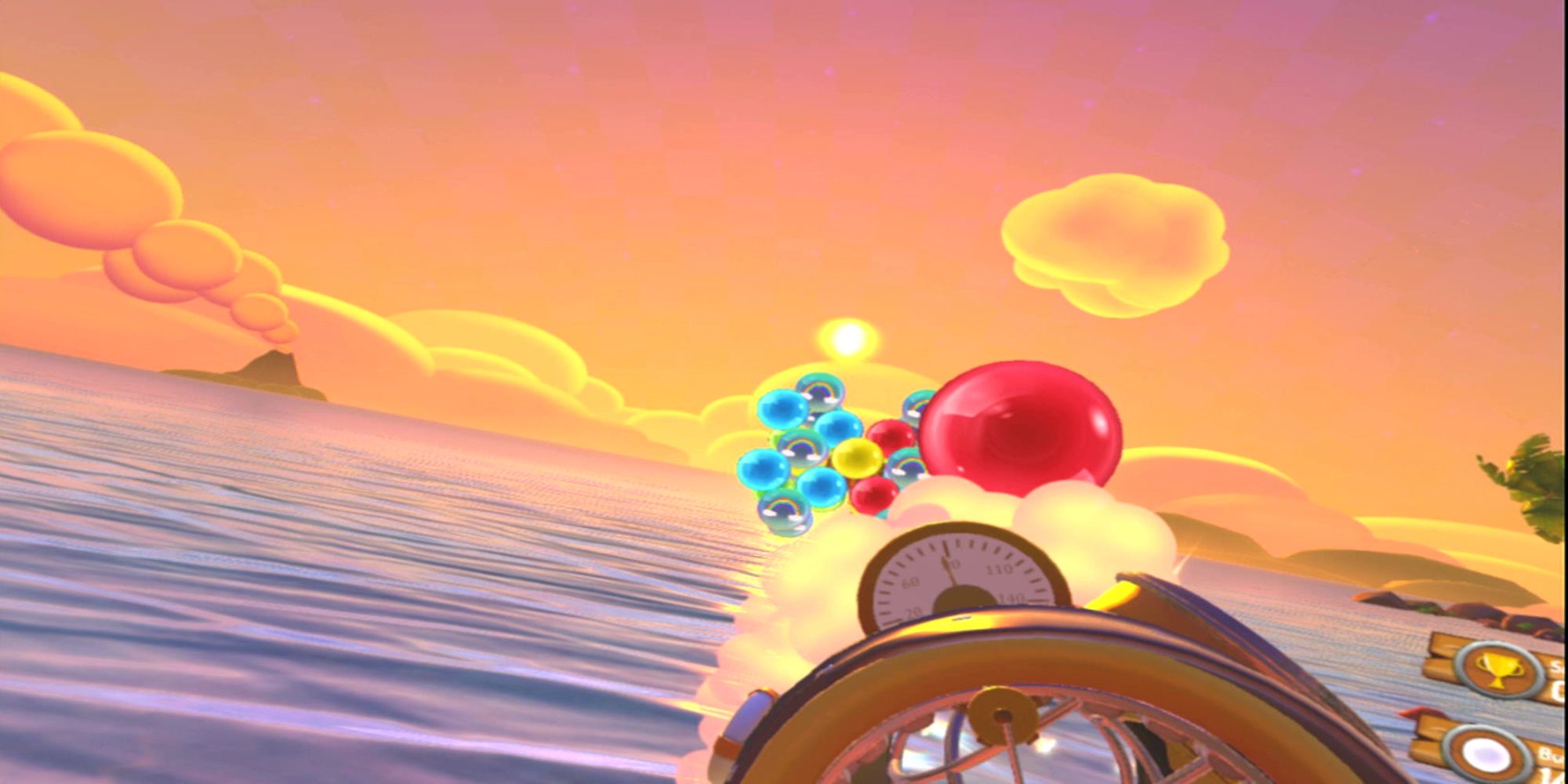 Playing Puzzle Bobble 3D in VR is a different experience from playing on your gamepad. It feels much more tactile and accessible than gamepad play does. For instance, playing VR gives you better control of your shot force and a more sensitive aim. These advantages make sense, considering that Puzzle Bobble 3D was launched for VR first and ported to the gamepad for its PlayStation release.

However, whether you have a naturally shakey aim or your arm gets tired, you may have difficulty maintaining your accuracy. And you can't afford to lose accuracy in later stages, especially as bubble clusters start to move up, down, left, right, forward, and back. Therefore, we recommend resting your dominant hand against your chest or side once you've locked onto your target. Doing so will help you maintain your aim as you release the trigger. Otherwise, your aim may shift at the last minute and cause your bubble to miss your target.