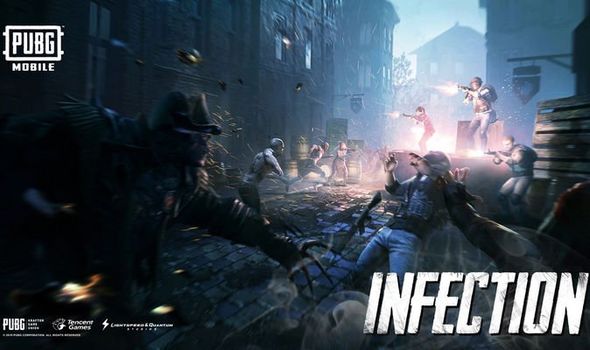 August 14 has seen a new PUBG Mobile update released in all major regions for Android and iOS gamers.

The new patch has been slowly rolling out today, region-by-region and most players should have been able to access the download by now.

This is a new twist on the original Zombies mode released for PUBG Mobile and contains some interesting clashes between fans.

Infection Mode split players into teams, with some taking the roles of the undead attackers.

After the match starts, players are randomly divided into Zombies and Defenders, with the defenders able to use firearms.

The new PvP mode will allow Zombies to only use melee attacks and abilities with cooldown times.

The good news is that zombies can be revived after being defeated by Defenders, while Defenders will be turned into Zombies after being killed by Zombies. It sounds pretty tough for the defending team, with a growing number of threats popping up on the island.

However, if one Defender survives, then the Defenders win and that’s going to make things pretty interesting when it comes to tactics.

“Earlier this year, PUBG MOBILE teamed up with Resident Evil 2 to give the classic battleground a sinister undead makeover with the introduction of zombie mode,” a message from Tencent explains.

“In this hit version of PUBG MOBILE, players test their grit against hordes of monsters to survive until dawn.

“For the first time ever, players can now drop into an all-new asymmetric player vs. player zombie infection mode where they are divided into Zombies or Defenders.

“While Defenders are equipped with firearms, Zombies can only use melee weapons and special abilities with cooldowns to take down and infect Defenders. If all Defenders are infected, the Zombies win.”

Another big part of the update is the new Global Treasure Hunt, which is divided into 4 stages, each with its own map.

According to Tencent, there are seven levels for each stage, and two missions for each level. But these aren’t the only changes, with Tencent also releasing a massive patch notes list.

This can be found below and includes all the major tweaks made in PUBG Mobile update 0.14.0.

a) Asymmetric PVP mode where players are divided into Zombies and Defenders at the beginning of the match.

b) Defenders have firearms, but Zombies can only use melee attacks and abilities with cooldowns. Zombies can revive after being killed, while Defenders will turn into Zombies.

c) If all Defenders are infected, Zombies win; and Defenders win if at least 1 survived within the given time.

e) Infection can be played in room mode.

a) Victor, the first new character, is available for free. Collect him from the Character under Workshop.

b) Victor’s skill reduces SMG reload time. His skills work in EvoGround and do not affect the balance in Classic mode.

c) Victor has exclusive outfits, with Legendary Conquest being the best one. Collect materials and level up to get unique emotes and voices.

d) Level up Victor by playing in matches. There are rewards for every level and a special reward: MVP Results Emote at level 10 (max). Get premium Character Crates with rare rewards by earning EXP after max level.

a) Hunt for treasures during matches to find hidden treasures. Collect gold, silver and bronze compasses to redeem rewards.

iOS players can now switch the app to background while downloading updates.

a) Reduced the number of missions and upgraded the rewards.

b) Daily Missions, other than the Login Mission, are released randomly. Players can switch to other random missions in the pool up to 3 times a day.

A. iOS platform thread scheduling adjusted, reduced the power consumption and heating of some iOS devices

B. Smoother experience for getting on/off or driving vehicles

D. Smoother experience for when other players and Air Drops come into view

G. Items can now be picked up and equipped faster on some low-end devices